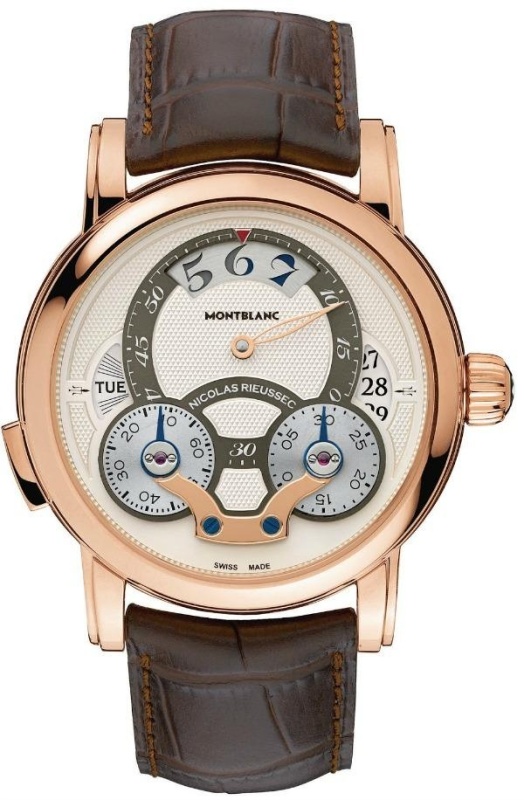 By: mkt33 : January 3rd, 2013-15:44
Montblanc Nicolas Rieussec Rising Hours A chronograph for day and night After observing the evolution of Montblancs Nicolas Rieussec chronographs, one might be tempted to conclude that time is a disc. Montblanc first used rotating discs to replace the ha...
login to reply

By: bigdave : January 3rd, 2013-21:24
I think that it is a wonderful move for Montblanc to add a Rieussec that is not dependent on the distinctiveness of its chrono elements to please. Moreover, it appears that they have done so in a very big way, adding the interesting hours complication and...
login to reply

Ok, so it is a Night / Day watch + a Chronograph, designed in an original way.

By: amanico : January 3rd, 2013-21:33
Did I get it well? Nice, very nice watch. Which has the good taste to be available in stainless steel, too. Best, Nicolas
login to reply

By: MTF : January 4th, 2013-00:22
I liked the dual time zone version before. "I liked it so much that I bought the company." :-) Unlike Victor Kiam (Remington Razor), I could not afford to buy the Montblanc company but I did get the watch! It still has the distinction of being the first w...
login to reply

Ahh, I was close!

By: patrick_y : January 4th, 2013-00:56
I was close about the day/night indicator disc. But it's not a 24 hour disc. Montblanc decided to do this in a more clever and proper but difficult way instead of just a simple 24 hour disc. Looking forward to seeing the platinum and steel versions as wel...
login to reply

By: Tick Talk : January 4th, 2013-06:48
LOL, I think I posted a mere 39 minutes before Mike revealed the full complication. FWIW, I assume it's a typo that blue is night and black is day? Nice touch with the Maltese Cross-type cam system that provides a gradual change from am to pm colors. I'm ...
login to reply

By: jmpTT : January 8th, 2013-11:01
For those of us who are less visually-creative, I am hopeful that Montblanc passes along some schematics to show the dual-cam system in operation. As has become customary with the Rieussec line, this watch is aesthetically balanced and the added complicat...
login to reply