Mar 13, 2013,05:54 AM
On Monday, January 21 st 2013 at the Salon International de la Haute Horlogerie (SIHH) in Geneva, the Villeret Seconde Authentique of the Ladies’ Watches from the Montblanc Collection Villeret 1858 was unveiled to the public and the international press.

Ladies too have long since discovered Montblanc’s watches. Now the manufacture in Villeret returns their compliment and presents the Seconde Authentique series with models which are expressly conceived for feminine wrists. Charmingly ladylike timepieces with an inlaid mother-of-pearl dial and the fire of genuine brilliant-cut diamonds. And a classically elegant lady’s wristwatch available only in tandem with its accompanying gent’s model.  Each is limited to 58 watches or 58 pairs of watches. 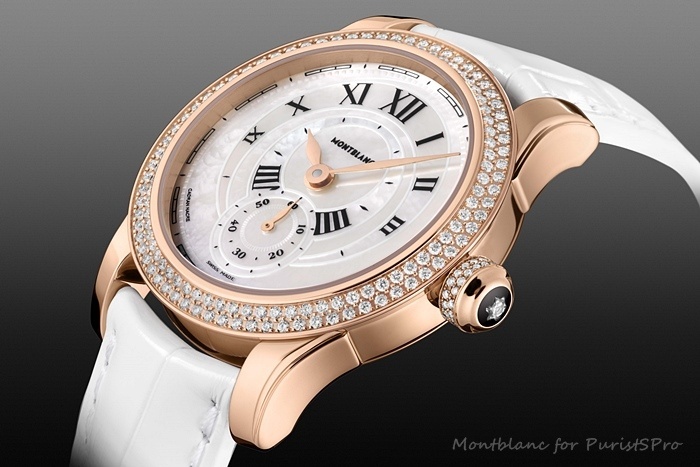 The 18 ct red gold case is perfectly sized for an elegant lady’s wristwatch. With a diameter of 36mm, it’s large enough to exert its full effect and to show the time in a readily legible manner, but not too dominant, thus assuring that the rules of distinguished elegance are always upheld. The appearance is further enhanced by gently curving horns with contours that develop harmoniously from the round arc of the case. A domed sapphire crystal, which has received antireflective treatment on both its surfaces to prevent reflections and glare, protects the dial, which boasts appealing tone-in-tone intarsia that have been manually assembled from paperthin flakes of white mother-of-pearl. The dial is also printed with black Roman numerals, its periphery bears a wreath of minute indices, and the seconds are shown on a subdial at “6 o’clock.” This pretty face is framed on the Seconde Authentique model by a concave polished bezel, while the bezel of the Seconde Authentique Joaillerie is adorned with 144 brilliant-cut diamonds with a total weight of  0.93 carats. 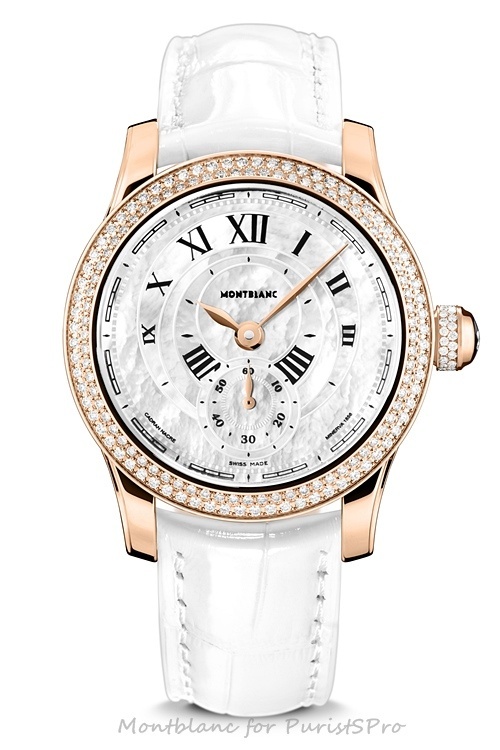 Each model`s crown bears a legendary Montblanc diamond: its 43 facets are cut to form the brand’s emblem. The pure white summit of the Mont Blanc with its six glacier tongues provided the inspiration for the shape of this incomparable diamond. Its extraordinary patented cut reveals, in perfect refraction, a second star deep within. On the diamond-studded model, the crown is additionally embellished with a wreath of  38 brilliant-cut diamonds with a total weight of  0.11 carats. Both watch models are affixed to a hand-sewn white alligator-leather wristband. A pronged buckle made of 18 ct gold secures the strap.

A lady’s wristwatch from the Montblanc Collection Villeret 1858 is a uniquely special piece of  jewelry. The classical elegance of its exterior, with a gorgeous dial and the incandescence of brilliant-cut diamonds, is matched by the uniqueness of the timepiece’s inner life, where the aesthetic thrives mostly in concealment and reveals only a fraction of its perfection to the viewer who peers through the pane of sapphire crystal in the case’s back. This makes it all the more important for the lady who owns this watch to know that artistic craftsmanship indwells the timepiece that she has chosen to adorn her wrist. The mechanical hand-winding calibre MB M62.00 embodies the traditional Swiss art of watchmaking, which is seldom seen in such uncompromisingly superlative quality nowadays. This especially applies to the large percentage of manual effort invested in finely adjusting and ennobling the many individual parts which collaborate to make this watch tick. The rhodium-plated nickel-silver bridges are beveled by hand and the Geneva waves are likewise applied with traditional tools. The manually adorned plate boasts circular graining. The watchmaker who determines the active length of the balance’s slender spiral spring by “counting the hairspring” is an experienced artisan who relies solely on her sharp eyes and steady hands to perform this exacting task. Even the gleaming red  ruby pallet-stones are manually pressed onto the lever with the aid of a so-called “pallet-stone press” into precisely the correct positions with a tolerance of a few thousandths of a millimeter so that they can perfectly mesh with the escape-wheel’s teeth. Each individual movement is crafted with an expenditure of skilled labor on a par with that lavished on the finest examples of haute joaillerie, so one can rightly describe the watches in the Montblanc Collection Villeret 1858 as haute horlogerie. Only in this way can timepieces be created that have inner values which spark enthusiasm combined  with that evoked by the classical beauty of their exteriors.


In Watches Too, it takes Two to make a Perfect Pair:
The Seconde Authentique “Pour Elle & Lui” from the Montblanc Collection Villeret 1858

When a man and a woman belong together, they often express their liaison by slipping identical rings around each others’ fingers. The Montblanc manufacture in Villeret would like to augment this romantic gesture with a pair of watches which instantly show that their wearers are a couple. This makes the Seconde Authentique “Pour Elle & Lui” a precious statement that expresses togetherness and shared hours.

Like a set of wedding-rings, these two watches share the same look and differ only in their  diameters, which measure 36 mm on the lady’s wristwatch and 39.5 on the gent’s model. Calibre MB M62.00 animates both watches and assures that their hearts tick synchronously at a pace of 18,000 semi-oscillations per hour (2.5 Hz). 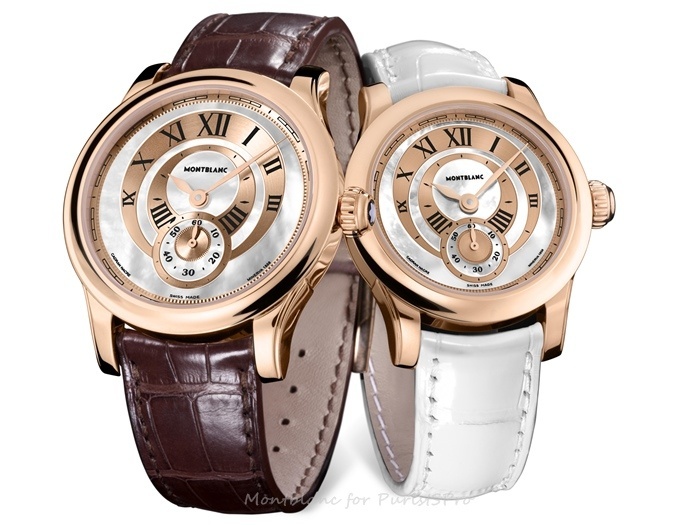 The cases are made of 18 ct red gold 5N: this alloy’s distinctly reddish hue gives it an especially romantic effect and automatically associates it with traditional values. All contours are harmoniously rounded: from the gently arcing horns, through the concave lines of the bezel, to the circular shape of the case.

The round dial is embellished with a miniature marquetry artwork crafted from red goldplated inlays and mother-of-pearl. The hour scales are made of a soft red gold tone with black Roman numerals; the same combination is used on the flange (réhaut) with its slender minute indices. White mother-of-pearl intarsias adorn the recesses between these scales as well as the subdial for the seconds at “6 o’clock.” Hands made of 18 ct red gold sweep their arcs above this work of horological art. But as aficionados have come to expect from the watches in the Montblanc Collection Villeret 1858, this is by no means the last of the beautiful details. A pane of sapphire crystal in the screwed red gold back invites connoisseurs to admire the manually-wound calibre MB M62.00.

Swiss Mechanisms in the Purest Tradition

The rear view of this hand-wound mechanical movement clearly reveals why the traditional Swiss art of watchmaking is globally unique. The rhodium-plated nickel-silver bridges are beveled by hand and are manually embellished with Geneva waves (côtes de Genève) which contrast beautifully with gleaming red jewels and a golden screw balance. The large diameter of the balance gives it an ample moment of inertia, while its manually counted hairspring contributes to the stability and regularity of the movement’s rate. Although the other delicacies are visible only to a watchmaker’s eyes, these tidbits reaffirm the extremely high craftsmanship standard upheld at the manufacture in Villeret. The movement’s nickel-silver plate is manually adorned with circular graining on both sides; its flanks are beveled by hand. The wheels are plated with gold and have faceted arms. These elaborate embellishments, which demand great skill and dexterity, transform each of the manufacture’s movements into a little treasure. Every Seconde Authentique “Pour Elle & Lui” wristwatch is a jewel that puts a crowning touch on a cherished relationship. These wristwatches are affixed to hand-sewn dark brown or white alligator-leather straps secured by 18ct red gold pronged buckles.

The Seconde Authentique  watches for couples are available only in sets of two, thus making them the perfect gifts for two people who love to spend their time together and enjoy every minute of each other’s company. Strapping the appropriate watches to their wrists is a lovely way to express this togetherness, but only 58 lucky couples around the world will have the rare opportunity to crown their togetherness with a matched pair of Seconde Authentique wristwatches from the Montblanc Collection Villeret 1858.

This ticking declaration of love is available since autumn of 2012.

Limited edition of 58 pcs. each

No. of components 162 (complete movement)

No. of jewels 19 (hemispherical, domed, olive-cut)

Crown  With Montblanc emblem in mother-of-pearl

No. of components 162 (complete movement)

No. of jewels 19 (hemispherical, domed, olive-cut)

By: Kong : March 13th, 2013-05:54
On Monday, January 21 st 2013 at the Salon International de la Haute Horlogerie (SIHH) in Geneva, the Villeret Seconde Authentique of the Ladies’ Watches from the Montblanc Collection Villeret 1858 w as unveiled to the public and the international press. ...
login to reply

By: penfriend : November 29th, 2019-04:23
This watch belongs to my wife and features the caliber MB 62.00 which was recently integrated into a new release. The beauty of the mother of pearl dial is hard to catch so I add a picture taken with flash to see its structure better. Overall a very hands...
login to reply

Any picture of the back? I think it is worth a look. [nt]

I am not a pro but here you go

It was worth posting this not so bad shot! Merci. [nt]