There are a few pictures on this forum of black-dialed Quartermasters... 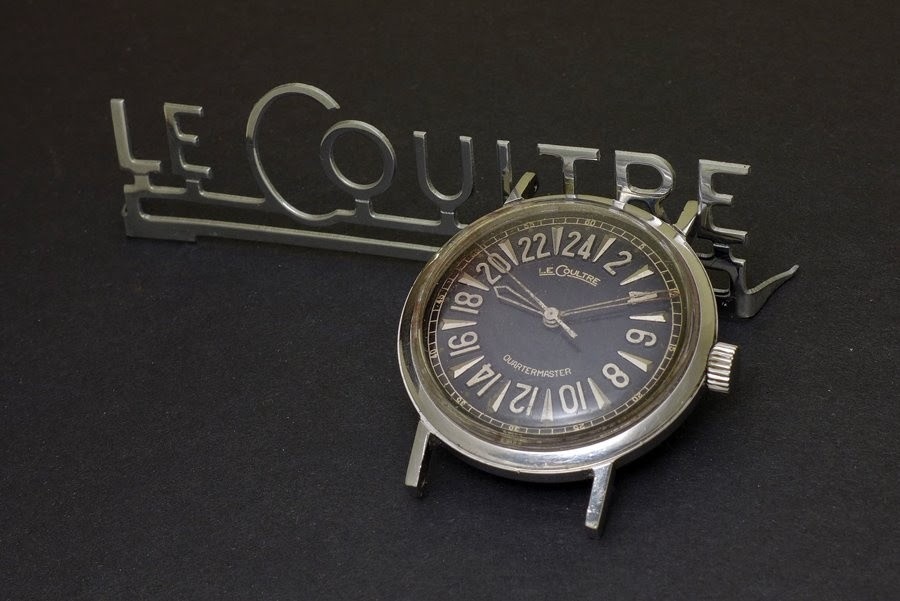 But I suspect that you want something a little more "tangible".  I've linked this thread over to another forum where you are a member.  Someone over there found an auction listing for Gus Grissom's LeCoultre, which was sold about 10 years ago.  So now we have 4 examples, all owned by Mercury astronauts.  Sense a trend here?
I highly doubt that Jaeger-LeCoultre would have any records about these watches.  At the time, LeCoultre watches were distributed in the US by Longines-Wittnauer Co. of New York. The US side of the venture was sold to Westinghouse in the late 1960's  The latest date I can find any evidence of L-W's existence was 1994.  At that time, Longines was sold off to (what evetually became) Swatch and Wittnauer became independent for a time.
My guess is that these watches came about by mating the K831/CW caliber used for the Quartermaster, with an American made steel case and dial. 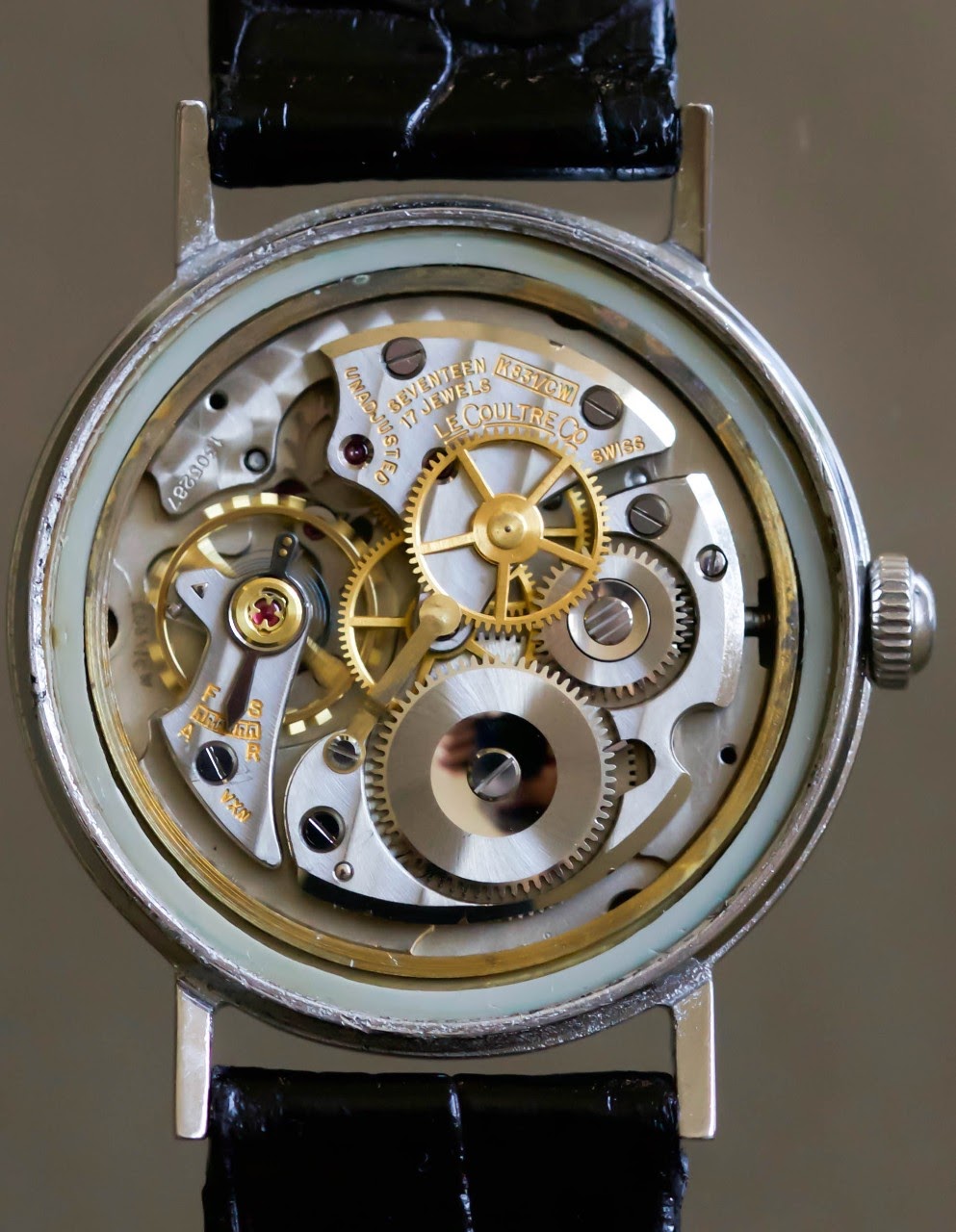 I do not know whether these were specially made for NASA at their request, or put together by Longines-Wittnauer.
gatorcpa
login to reply
Comments: view entire thread

By: OnTheDash : March 12th, 2018-13:12
Is anyone familiar with this watch? Authentic? Military-issued? Any interesting history, etc.? Sorry about the poor-quality photo, but that's all I have at the moment. Thanks in advance, Jeff ...
login to reply

AFAIK, LeCoultre only did one with ...

By: blomman Mr Blue : March 12th, 2018-23:35
This kind of 24h dial, the Quartermaster. If this is one, then the dial is a really bad repaint.... Do a search here in the forum you will find photos of mine. Best Blomman
login to reply

Series Produced for the Seven Mercury Astronauts?? This One, John Glenn's.

By: OnTheDash : March 13th, 2018-01:16
You guys are the LeCoultre experts, and I sincerely appreciate your responses. My quick research suggests that NASA ordered (at least) eight of these watches, and gave one of them to each of the seven Mercury astronauts. This would have been in the Mercur...
login to reply

Well, never claimed to be an expert....

By: blomman Mr Blue : March 13th, 2018-03:02
Only 8 pieces made for a special occation in US... Never heard of any claims that JLC delivered any watches to NASA. As for this watch, most likely the same movement as in the Quartermaster, Cal 480 CW. Strange choice for an astronout watch. OK, the 24h d...
login to reply

By: OnTheDash : March 13th, 2018-03:24
No doubt, a very strange story . . . and almost 60 years later, it is difficult to suggest how these eight watches would have been ordered / produced / supplied. But it was being sold with other items from the estate of John Glenn, and the watch matches t...
login to reply

By: OnTheDash : March 13th, 2018-06:56
Sometimes, I think that I am buying the watches, just to add some fuel to the fire, in trying to solve their mysteries. I was born in 1955, so have always been a huge John Glenn / Mercury astronaut fan. Hopefully, we will get some interesting information....
login to reply

One reply here and you find it all by yourself....magick of this place!

Like Blomman, I only one model with 24 hours dial. And this is not this one. [nt]

By: OnTheDash : March 13th, 2018-13:30
I found this excerpt, on another forum, quoting Wally Schirra -- "Harold Johnson, one of the STG engineers, came to our office one day with eight wristwatches-one for each of us and one he would wear. They were analog watches with numbered dials, but the ...
login to reply

By: gatorcpa : March 13th, 2018-20:17
Note the watch on Alan Sheppard's wrist in this cover photo. I think it is the same LeCoultre. At least the band looks the same. gatorcpa ...
login to reply

Alan Shepard -- Yes, He Seems to Be Wearing the Le Coultre

By: OnTheDash : March 14th, 2018-03:16
Yes, when we look inside this issue of Life, we see Alan Shepard wearing the Le Coultre, as identified by that crazy looking bracelet (as seen on Wally Schirra's Le Coultre)!! Jeff ...
login to reply

We learn everyday. THANK YOU! [nt]

Wow... this is a fascinating story.

By: DSF : March 14th, 2018-03:40
Definitely a post I keep checking everyday for updates. Thank you for sharing. Best, David
login to reply

Question -- Does JLC Have Historian / Archivist Who Cares About Such Things??

By: OnTheDash : March 14th, 2018-03:58
So the question of the moment -- Does JLC have anyone who focuses on the brands' heritage / history, and might be able to offer any support? Or who even cares about such things? An interesting chapter in the Le Coultre history, right? Not "space worn", bu...
login to reply

What a find! And what an Excellent story! Thank you for having sharing it here!

By: OnTheDash : March 14th, 2018-14:41
So does anyone here have a suggestion, as to where I might be able to "beg, borrow or steal" a LeCoultre Quartermaster, with the black dial? I am assuming that buying and selling is not permitted on this forum, but I am hoping that someone can point me in...
login to reply

There are a few pictures on this forum of black-dialed Quartermasters...

By: gatorcpa : March 14th, 2018-18:06
...here's Blomman's example now: But I suspect that you want something a little more "tangible". I've linked this thread over to another forum where you are a member. Someone over there found an auction listing for Gus Grissom's LeCoultre, which was sold ...
login to reply

The Plot Thickens . . . "Johnson" Style LeCoultre Watch, as Issued to the Mercury Astronauts

By: OnTheDash : March 16th, 2018-10:31
So here is one of the "Johnson" / astronaut style watches (issued by NASA engineer Harold Johnson to the seven Mercury astronauts), sold on eBay approximately one year ago. Listed as a "Quartermaster", we see that it matches the "Johnson" watches, except ...
login to reply

A feast for the brain. Thanks for feeding us with these informations. [nt]

By: OnTheDash : March 16th, 2018-10:57
I love the puzzles, and this one is fascinating (at least to a 1960s / space exploration enthusiast). I have already learned a lot about LeCoultre, and am optimistic that we will be able to piece the parts together, to explain some of these watches. Also,...
login to reply

Your last statement: +1. I learned a lot about that. Now, I will forward your post to the Heritage Gallery of the Manufacture, just to see if they have something about that. [nt]

I’ve been reading this tread since its begining and it’s been really a total feast!m. Cheers. [nt]

By: OnTheDash : March 18th, 2018-12:25
This has been a fun one, for me as well. I'm looking forward to learning more about these mysterious LeCoultre Quartermasters, and the newly-discovered cousins, handed out by NASA engineer Harold Johnson. Jeff
login to reply

By: OnTheDash : March 22nd, 2018-20:55
Thanks again to everyone on this amazing forum who contributed to the identification / chase / acquisition. Tonight, I took the proper head-shot . . . maybe a good way to close-off this thread . . . or at least this first chapter. We'll let it run down ov...
login to reply

As an epilogue for this first chapter...

Thanks, Jeff. A pleasure to discover and have a look at this " revelation ". [nt]

By: blomman Mr Blue : March 24th, 2018-00:33
I will follow your mission to uncover these with pleasure. Best Blomman
login to reply

A Couple of Additional Photos

By: OnTheDash : April 13th, 2018-07:56
Sorry for going silent, regarding this watch from the estate of John Glenn, but it will go off for servicing next week, so I snapped a couple of photos last night. Unfortunately, I was unable to remove the case-back, as it seems to require a strange tool ...
login to reply

Thanks, Jeff. Try to open it, for us to have a maximum of pictures and informations about this very rare bird. [nt]

I Will Rely on My Watchmaker to Open the Case

Be careful, indeed. It would be too stupid to ruin this case back! [nt]

Thanks, Jeff. Yes, putting it all together would be great for that watch which deserves it! [nt]

Thank you for keeping your promises!! Very nice movement.

What a great watch!