Azimuth SP-1, a review after 10 days on the wrist

my new SP-1 arrived last monday and i planned to do a review of it after wearing it for some time. the last post on it was Cen's last year when they were first released so i didnt expect sudden interest before i'd had time to write about it. firstly let me apologize for the dust and fingermarks on the watch. i took them the day after it arrived and it had been well fingered by me, wife and kids. they were so hard to take that i'm not going to try to do it again. but hey ho, these things happen so i'll get on with it.

From what i can gather there are 2 models available, the steel version and the black pvd version. both have deep blue dials. i have not seen any mention of another coloured dial, but anything is possible. there are 2 straps. the original steel version came on a very nice dark blue leather strap with pin holes all over it. this is the model that i have which i understand is now discontinued. the only strap now available is a black rubber one. the reasons i went for the steel case and blue strap are that i dont like rubber straps and i personally think the blue dial stands out better against the steel case than it does the pvd case.

It arrived in a nice outer and inner box which i wont dwell on as i'm a firm believer that they are unnessesary and add costs to the watch which could be avoided.

the watch case itself feels quite heavy and substantial. its 45mm diameter with long curved lugs top and bottom. personally i think the case finish is quite good although basic. there are no sharp edges anywhere and it is mostly satinised with 2 polished sections down each side of the dial. the crown looks to be in an awkward place, but works well with the whole spaceship theme. (one important note about the crown is that only the top side is accessible and there is a specific technique to winding it. i only found this out after contacting the company prior to purchase due to Cen's negative experiences with his. Alvin Lye one of the 2 company owners was extremely helpful and explained how to do it. while the watch is in your left hand with the crown uppermost you put the outside of your right thumb on the crown and push right to left. it is extremely easy and can be done without removing the watch from your wrist. personally i think that Cen's problem was his very nice aftermarket strap which may obstruct the crown) 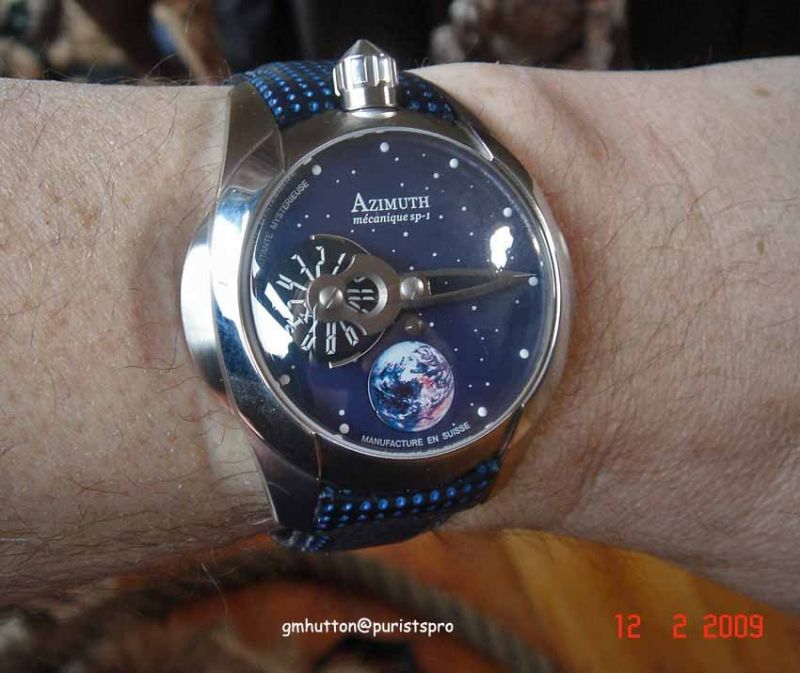 the 2 side pieces on the case are unusual and curve down from the top and up from the bottom which means that only the smaller display back sits on the wrist. i think this helps to make it feel smaller than it is. 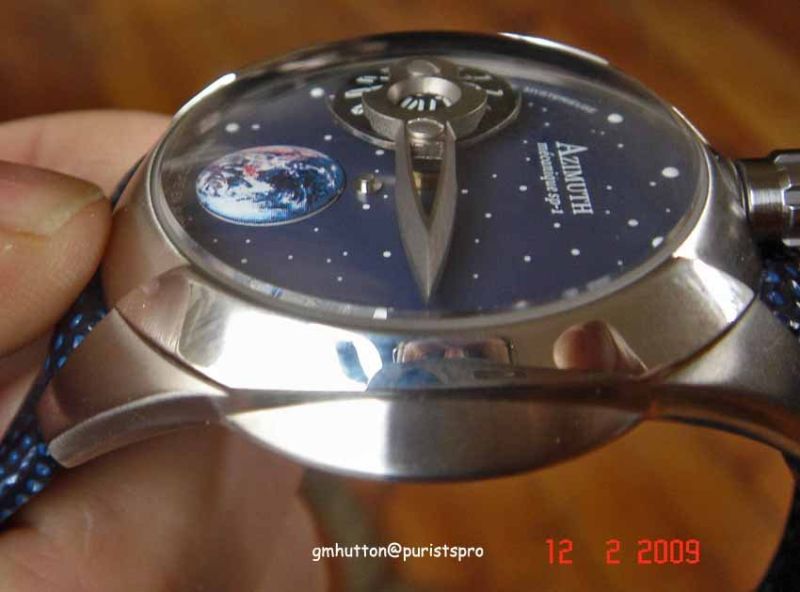 even though the watch is quite large the curved lugs make it fit very well on the wrist to the point where you can easily forget you've got it on. following the spaceship theme, if you look at it side on the very domed sapphire crystal reminds me of the Jetsons if anyone here remembers them

its very hard to measure but i would say that the crystal dome is 4mm high in the centre. it feels very strong and solid so i have no worries about damaging it. 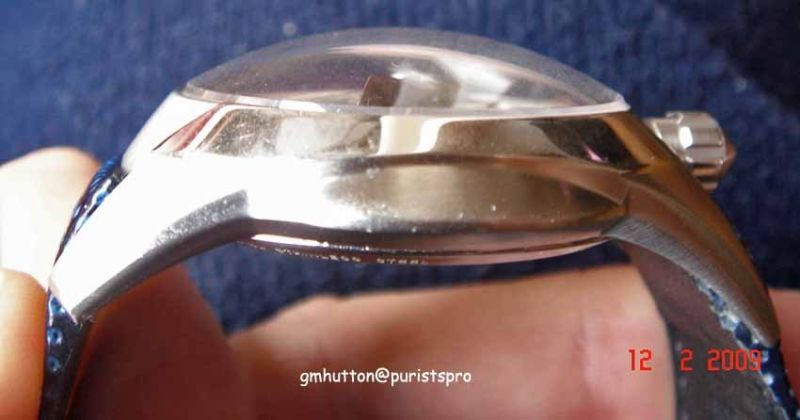 as you can see from the above pic, the lugs are different in length with the crown end being about 3mm longer probably to give better access to the crown.

i will disagree with some points already made about the dial, but agree with others. the minute hand is extremely substantial and is the major implement for reading the time. on the company website it mentions lume on the minute hand, but mine doesnt seem to have any. not a problem from my point of view. the jump hour mechanism is simple, but clever, using a metal stud on the dial to actuate the hour disc. the hour disc is however a bit of a problem. it is very hard to read the numbers due to the small aperture and 'digital' numerals. the numbers are lumed which is pointless as they are so hard to read. a square hole would have been better and ordinary font on the numbers would have improved legibility immensely.

the dial itself is a very nice deep blue. i think that the quality of the text is good. it all depends how close you want to look. i used a 10x loupe and found no faults. this is far closer than the eye can see so thumbs up for that. the lume on the 5 minute markers is good although the 'stars' which look great in daylight dont show up at night. this could have something to do with the fact that i wasnt wearing my glasses at the time. its not really a watch designed for night time legibility so all of these 'faults' can be forgiven. the rotating earth at 6 is, as someone has mentioned, quite flat, but you need to bear in mind that it needs to rotate on the sub second spindle so has to be light in weight to avoid problems. overall i think its a nice dial. 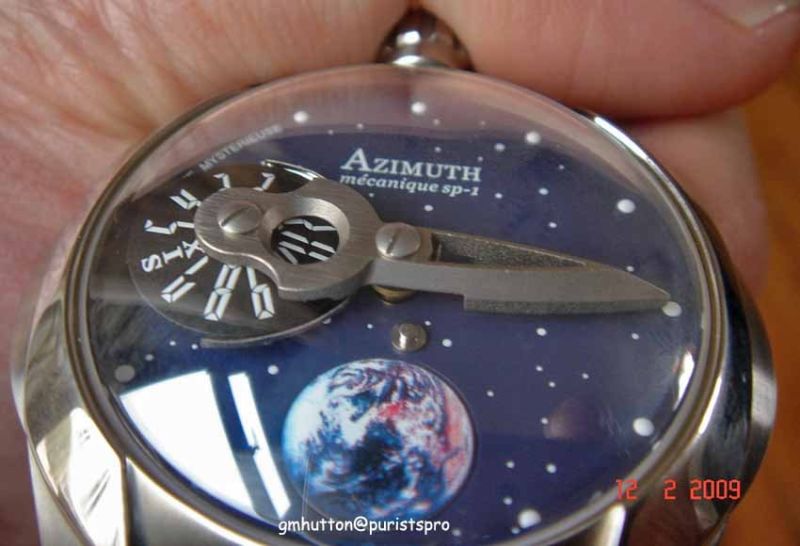 as you can see in the close up below, the numbers dont fit the aperture very well. this could easily be improved by changing the font or the shape of the aperture. 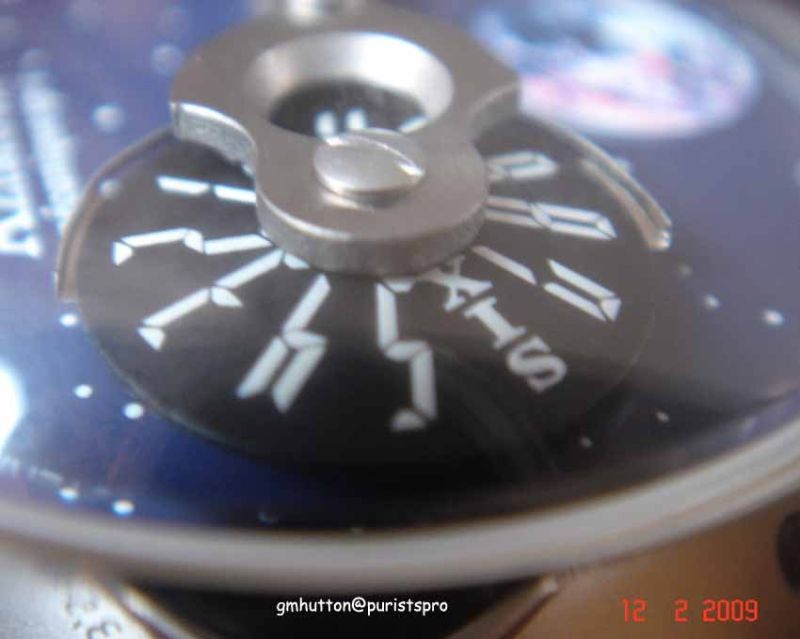 the movement is a manual wind Unitas 6497 without much decoration, but its an excellent tried and tested movement and does the job perfectly well. there is a nice display back fixed with 4 screws. again, due to the shape none of these are in contact with the skin so wont annoy. the watch is 30m WR, but its not designed for swimming so thats not a problem. accuracy is difficult to gauge as there is no second hand and no minute markers, but in the 10 days i've worn it i havent had to adjust the minute hand so it must be pretty good.

you can see that the strap is attached with 2 springbars on each side to allow it to follow the curve of the case and lugs. it could make it very difficult if you want another strap. that is a problem for me as i resent paying the prices charged for OEM straps. 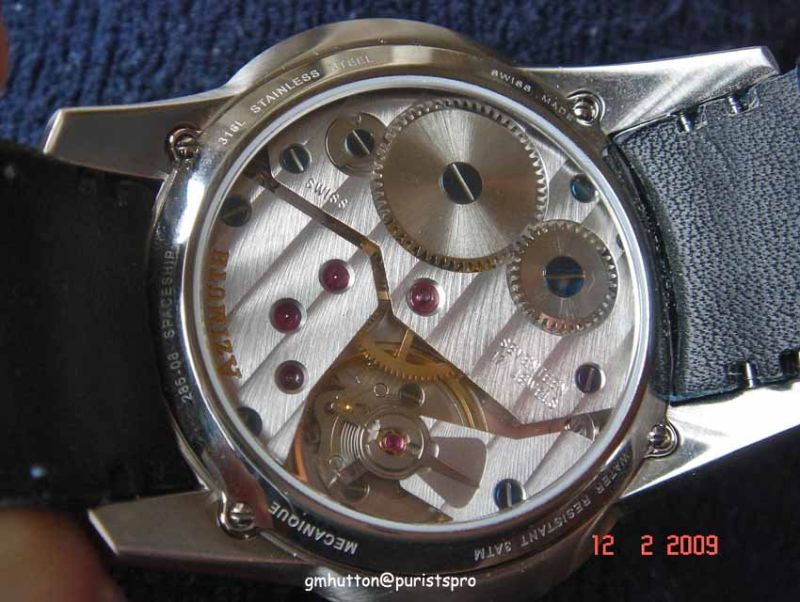 this is the best pic i could take of the strap to show its true colour which matches the dial nicely. the little pin holes dont go all the way through, but give it some added texture. the strap is extremely soft and comfortable and comes with an Azimuth marked butterfly deployment clasp which works fine. 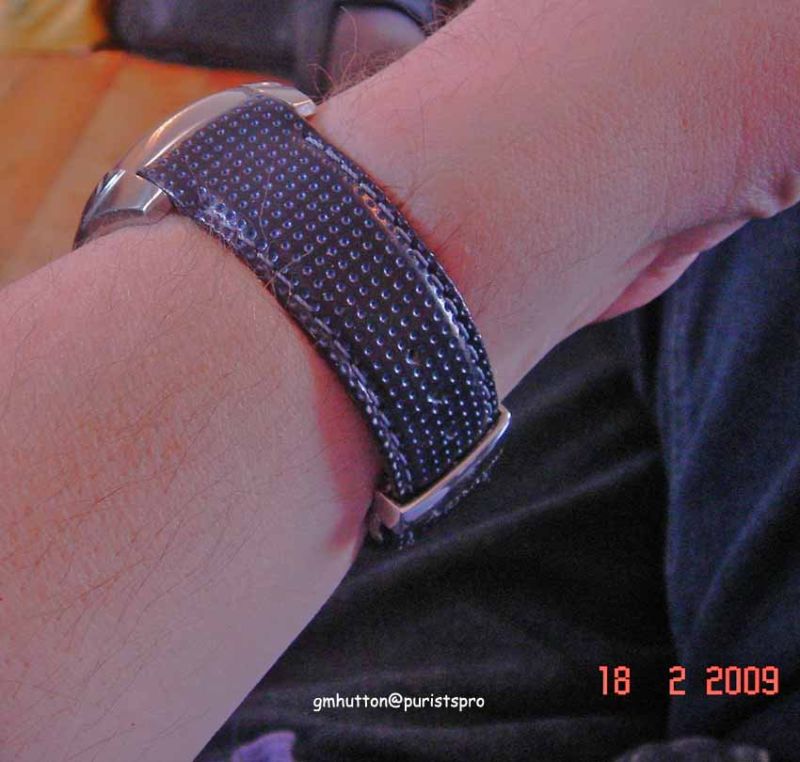 to summarise, this watch is not a serious timepiece, but more of a toy that tells the time. if you view it on that basis then it is very good indeed. price wise i think that the retail is expensive, but i paid quite a lot less than retail. if you look around you can find them very keenly priced due to global meltdown. on that basis i think it is worth what i paid for it.

if you want an extremely accurate timepiece which you can see clearly at a glance then this is not the watch for you, but if you like wearing a fun unusual watch that promotes conversation then give this one a go.

its not perfect, but it is fun and i like it.

i hope this is an informative and unbiased review of a rarely seen watch.

Azimuth SP-1, a review after 10 days on the wrist

By: G99 : February 19th, 2009-07:44
my new SP-1 arrived last monday and i planned to do a review of it after wearing it for some time. the last post on it was Cen's last year when they were first released so i didnt expect sudden interest before i'd had time to write about it. firstly let m...
login to reply

Thanks for the on-wrist review

By: Bounce781 : May 13th, 2009-21:08
Congratulations on your acquisition. Thanks for posting an 'on-wrist' opinion piece. I couldn't find another personal experience with this watch anywhere. I've been eyeing this watch off for a while. Looks like a stunning & whimsical piece. I've got a...
login to reply

By: Hororgasm : May 20th, 2009-16:25
Good review. i contemplated getting it, but after trying it on, feels its more a "toy". nevertheless, being singaporean, been a supporter of their philosophy. got the BMF pvd as well as Roboto.
login to reply