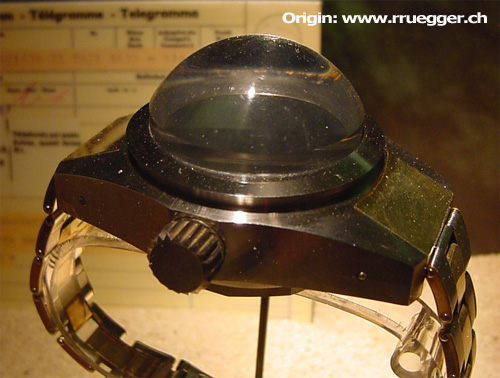 The present watch is from a small series of possibly less than 10 examples of the Deep Sea Special model made in stainless steel and fitted with stainless steel or stainless steel and gold bracelets. Other examples of these extremely rare watches are on permanent exhibit at the world's most prestigious technical and horological museums such as the Deutsche Museum in Munich, the Smithsonian Institute in Washington D.C., the Musée International d'Horlogerie in La Chaux-de-Fonds and the Clock & Watch Museum Beyer in Zurich.

According to its owner, the present watch participated at one of Picccard's diving trials with the bathyscaph "Trieste" in the Mediterranean Sea.

Because of the tremendous pressure, the depth a diver can reach without special equipment is very limited; the deepest recorded dive by a skin diver is 127 meters (417 ft). To explore even greater depths, deep-sea explorers are forced to use specially constructed steel chambers to protect them.

Since the early 1920s, Rolex had worked on the development of waterproof watches, the famous Oyster models. To put their watches on a trial on which no other watch had ever been, they contacted Professor Piccard to test watches during his diving experiments. Piccard accepted and Rolex engineers developed a watch fitted with a special case and a domed crystal in order to hold up to extreme pressure.

Its resistance was successfully tested at the ETH in Zurich and on 30 September 1953, the Trieste and the watch fixed to its outside made their first dive to a record depth of 3150 meter. During this dive in the Tyrrhenian Sea off the island of Ponza, both Auguste and Jacques Piccard were on board of the bathyscaph. On 8 October Rolex received Piccard's memorable telegram confirming the success of the experiment with the words "Your watch perfectly resisted to 3150 meters".

This is what I call strong watch

There is always something more...

After the dome and the superdome...

now THAT is a cyclops [nt]

What a loook! Unbelievable for this era! nt

Yes there was a TT version