A perfect solution from the 30ies

here is the ultimate solution from the 30ies...

It is a rare yellow gold model of Omega "Marine" which was the first attempt to build a
waterproof watch. Normally they are made of SS but this particular watch was made in yellow gold -
these gold watches mostly have been sold by Cartier, Tiffany´s etc. and often there is only the
retailer´s name on the dial instead of the Omega script and logo.

This particular watch was sold to and afterwards through Udall Ballou, a well known
juweler and retailer in New York (at that time).

For the attachment of the strap there is a solid gold barr with a screw head and a thread on the other end.

This is a secure and strong way to hold the watch and also the strap can be changed easily!

Below you can see a better picture in detail... 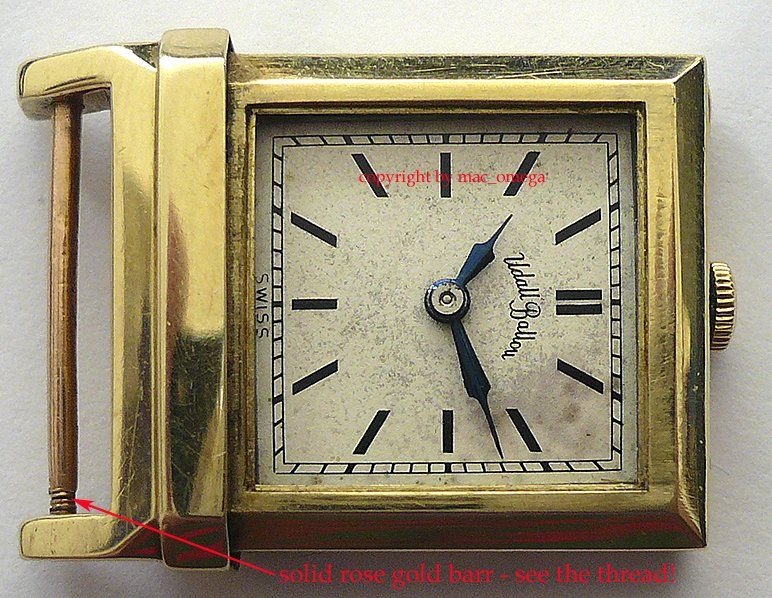 The gold barr is made of rose gold whereas the case is yellow gold. So there is a nice accent to the appearance of the watch.
It is a kind of stylish "design" aspect which adds to the beauty of the watch.


In the picture below you can see the screw head on one side and the end of the screw on the opposite side.

Do you associate less spring bars used with higher quality?

By: rijowysock : July 23rd, 2008-13:27
we touched on weight versus comfort.. now I'm curious to see my other thought, amount of spring bars versus quality.. one thing that over the years has never changed with me is i dont trust a spring bar, i know that the force exerted by the spring bar is ...
login to reply

By: AnthonyTsai : July 23rd, 2008-13:58
Spring bars are unsafe IMO, and i hope all brands eventually use some type of screw-in system rather than spring bars. I will always remember the time when I wore my UN marine perpetual (don't have it anymore though) many years ago, and for no reason the ...
login to reply

By: G99 : July 23rd, 2008-14:48
my dog lead caught on the strap and bingo, watch in bushes never to be seen again, but that was an adverse force on the strap and it shouldnt have happened. i'm a bit more careful what i wear dog walking, but other than that dont have a preference either ...
login to reply

By: Gaz : July 23rd, 2008-15:59
That was one expensive dog walk. We Sydneysiders always joke that we should drag net the seabed of Sydney Harbour. We are certain we'd find a few interesting time pieces amongst other things. Agree that springbars always feel less secure. Gaz
login to reply

Agree with you Gaz

By: rijowysock : July 23rd, 2008-14:49
but still the clasp on the Mille, Eventho appearing to be screwed is a spring bar, the alinghi I'm wearing looks similar but it's a springbar. Just always makes me weary. I know it's easier. But to put a screw would make me feel a little less worrysome wh...
login to reply

I am not sure that screw bars are better...

By: DonCorson : July 24th, 2008-05:37
I have seen so many screws back out by themselves in different applications that I have more confidence in a spring, as long as it doesn't break. How often have you lost a screw in your glasses? If I look at the people around me I would guess at least onc...
login to reply

some screws do come out

A perfect solution from the 30ies

By: mac_omega : July 24th, 2008-05:53
Hello guys, here is the ultimate solution from the 30ies... It is a rare yellow gold model of Omega "Marine" which was the first attempt to build a  waterproof watch. Normally they are made of SS but this particular watch was made in yellow gold - these g...
login to reply

By: AndrewD : July 24th, 2008-16:00
Hi Erich, This looks to be a very robust system of anchoring the strap. Thanks for the interesting history lesson. Breguet have used a screw-in bar with an additional locking screw on the rear of the lug on the Tradition series. This locking screw would g...
login to reply

This is a nice idea