Three times is a charm - Paul Gerber presents his Cal. 42 triple-rotor in a sporty package

In my recent teaser post I hinted a new watch developed by Paul Gerber. The key image was this:

While it is always interesting to learn about a new watch by some of the independent watchmaking geniuses around, it gets particularly exciting if the said new creation can be considered affordable (in relative terms). This is where the subject of this post enters.

When I visited Zurich a few weeks ago, Paul phoned me and said I should come, I would not regret... I obeyed and was not disappointed. What I saw was unexpected in terms of design and price-point, but not in terms of horlogerie à la Paul... In his typical whimsical way, he hinted that he had something to show that might interest me. Well, that was a clear understatement!

What he produced was a brass testing case that did not look particularly exciting... 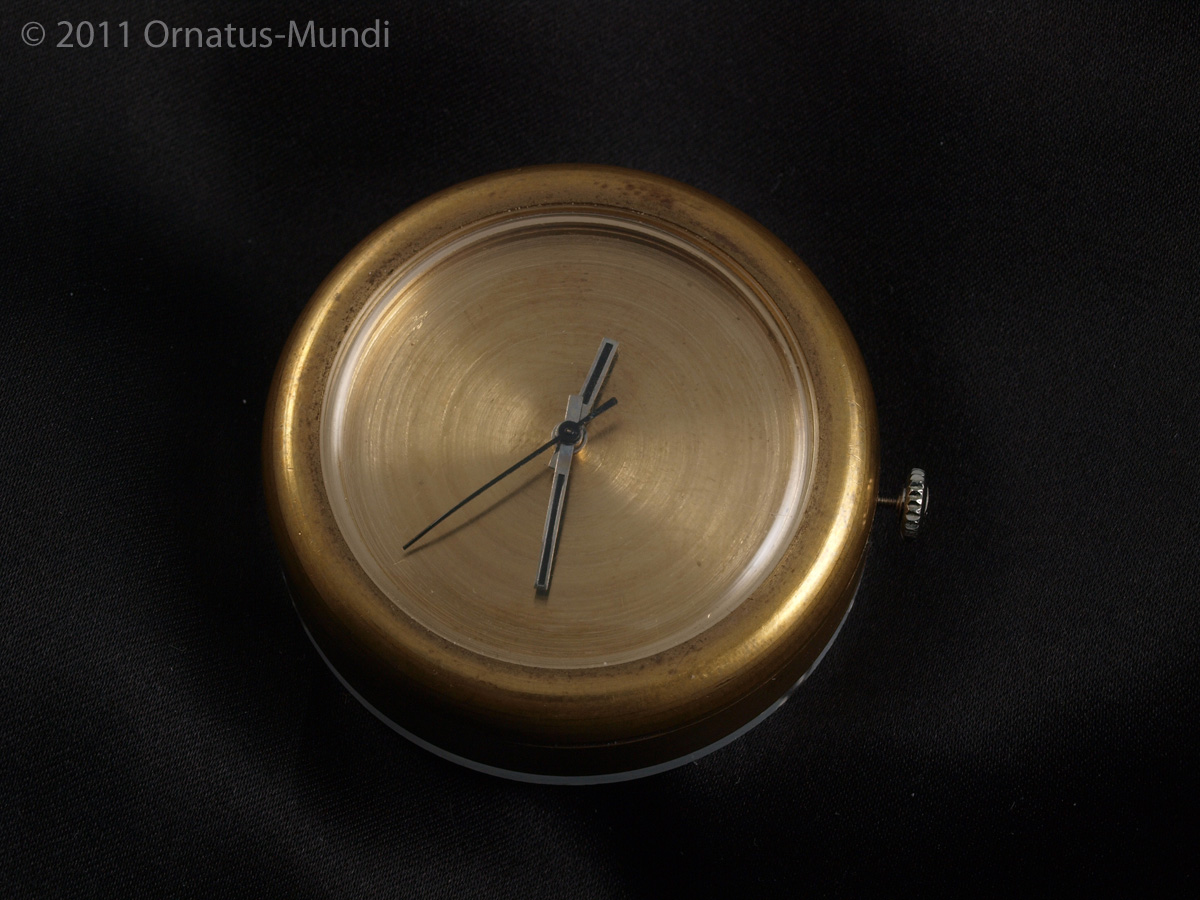 But as we connoisseurs know, the scene plays often in the backyard:

For those of you who are familiar with Mr Gerber's watches, you will certainly be reminded on his Retro-Twin, which features an automatic movement driven by two synchronised rotors: 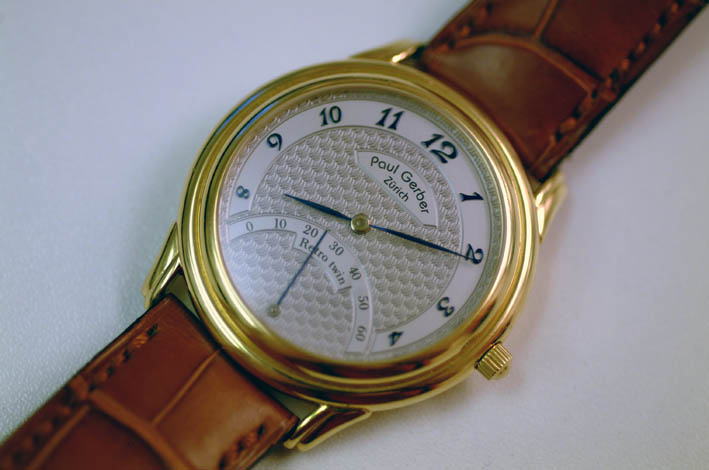 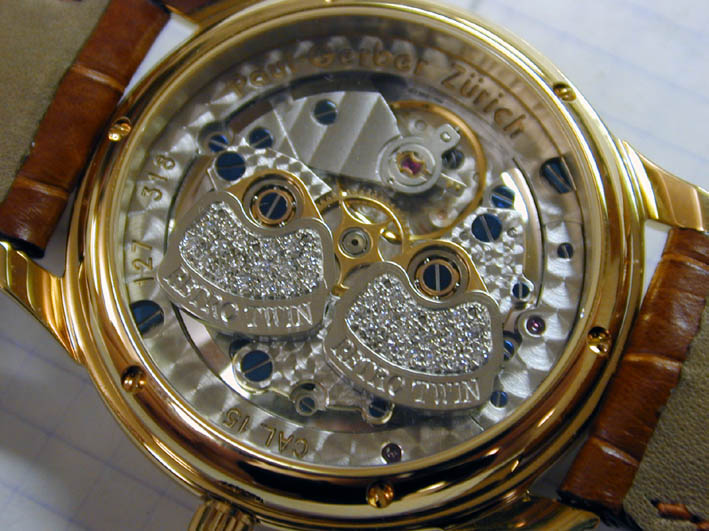 With his new model, plainly named Cal. 42, Paul goes ahead and adds a third rotor to the game. But more on this later.

In terms of design, I was totally surprised when I saw this case mock-up (produced by 3D-printing) that is a clear departure of the classic, breguesque offering we know from him: 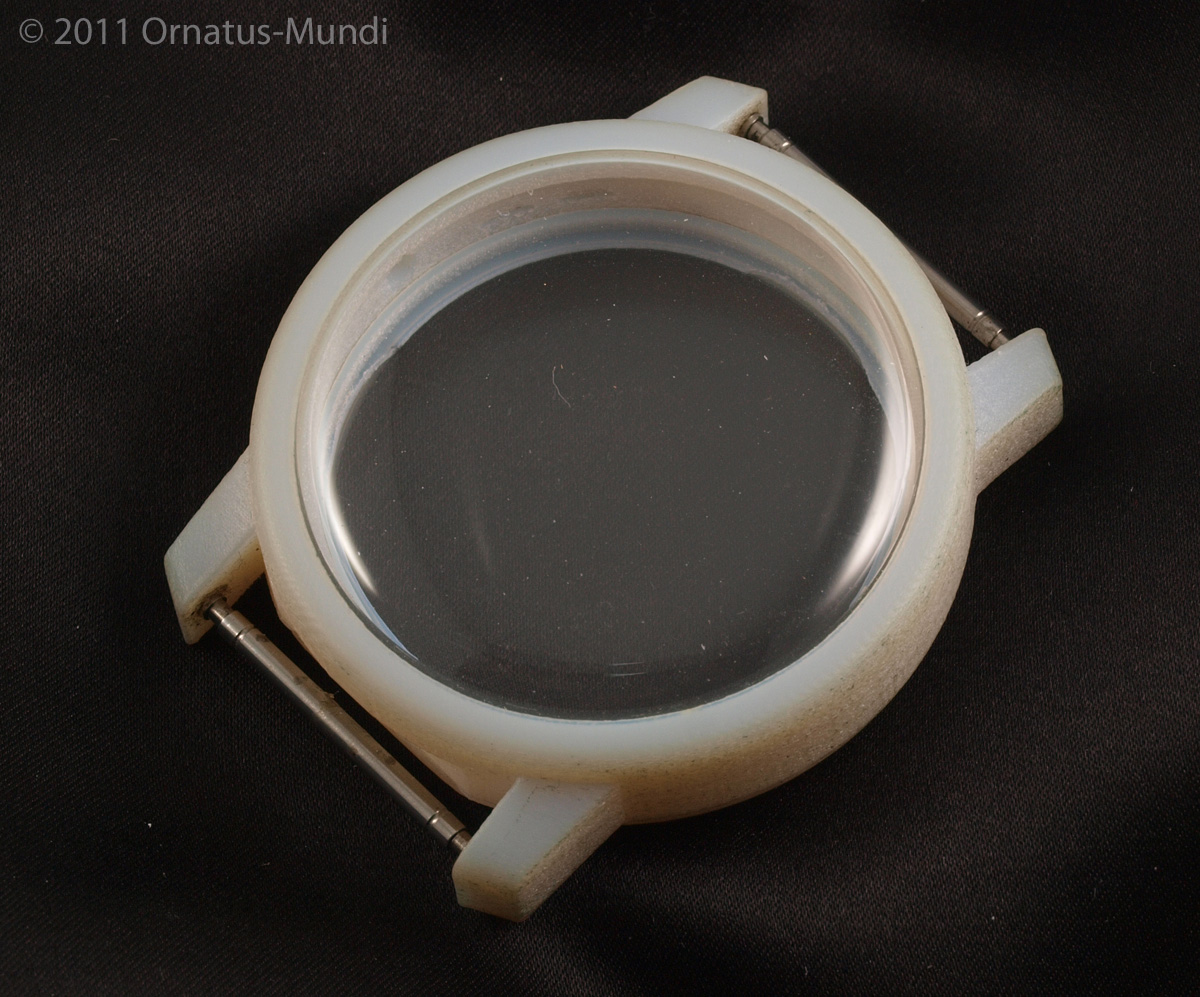 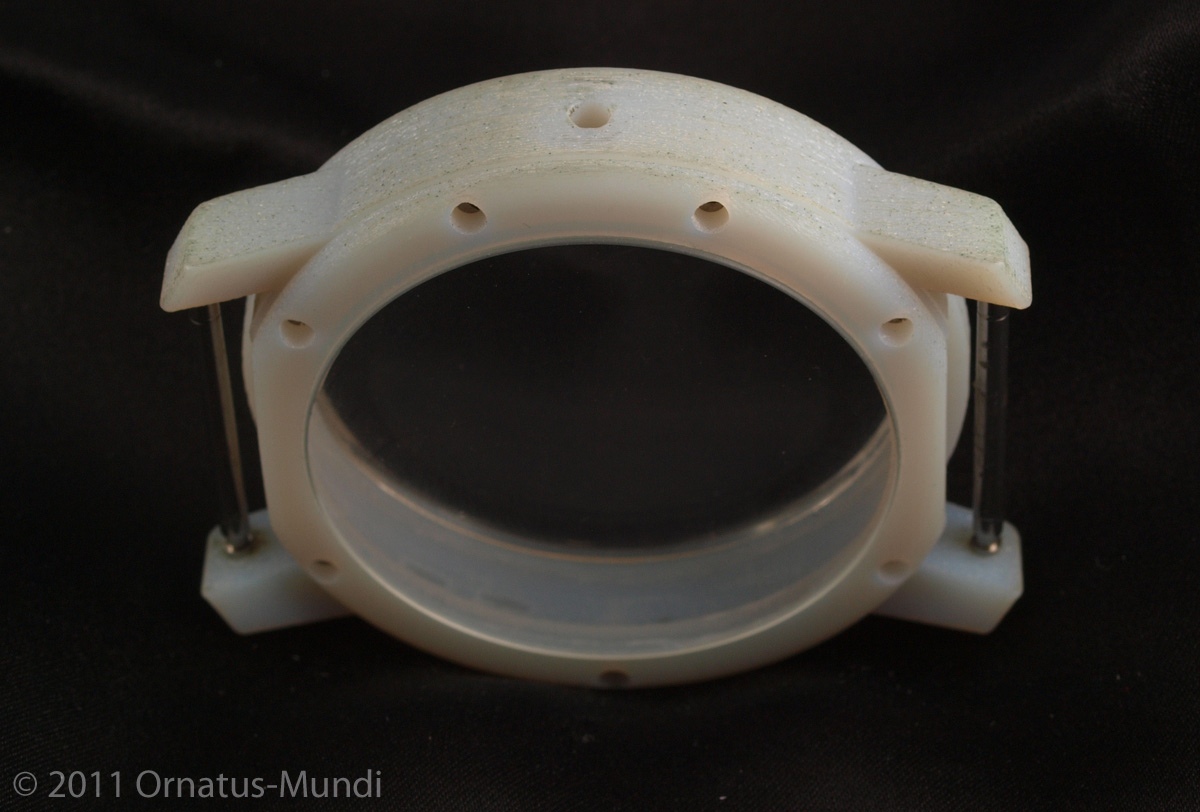 Totally clean, clear lines, nothing embellished or witty as I would have expected! Here now comes Paul's passion for control-line model aeronautics to play. The new watch is designed as a sporty, robust and legible watch. It comes in a 42mm case made of surgical titanium, with 100m water resistance and a screw-down crown. The dial is offered in two versions, the «synchron» model with green numerals (left) and thoroughbred aviator's watch in black & white (right). The script is Paul's own ('I developed it years ago and recently found it on my hard drive...'): 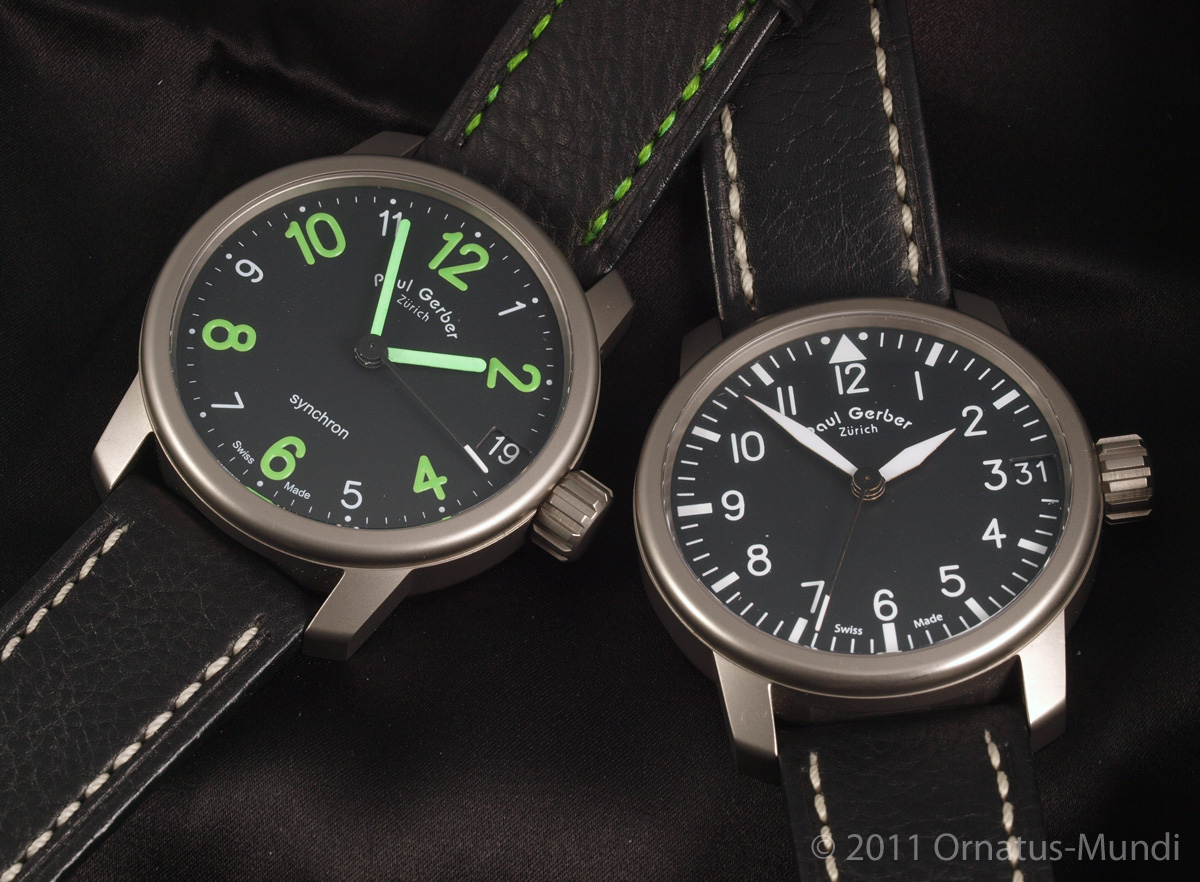 I'll come to the two models in separate posts. First, I would like to tackle the commonalities! The case exudes the confidence of an instrument, with athletic dimensions and robust construction. The case-back, with a sapphire glass allowing to admire Paul's most distinctive hand-writing, is held by 7 screws: 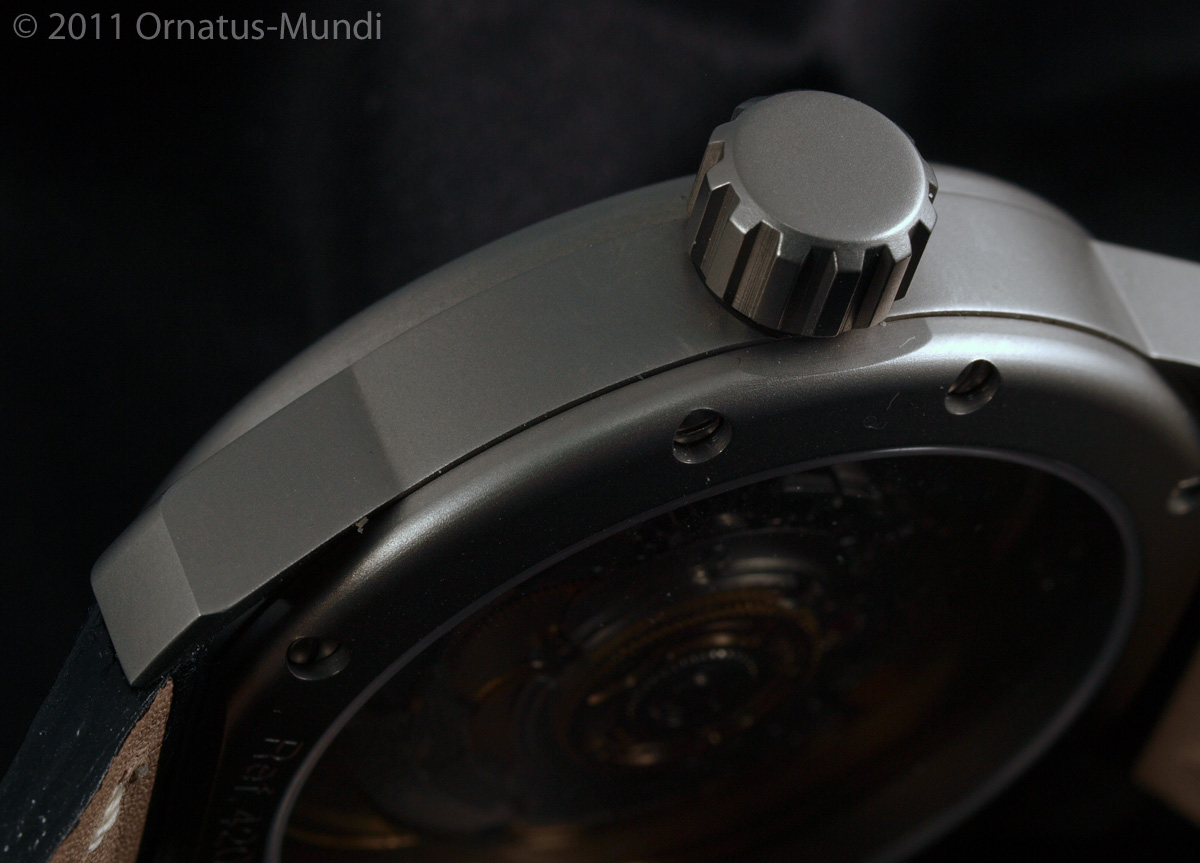 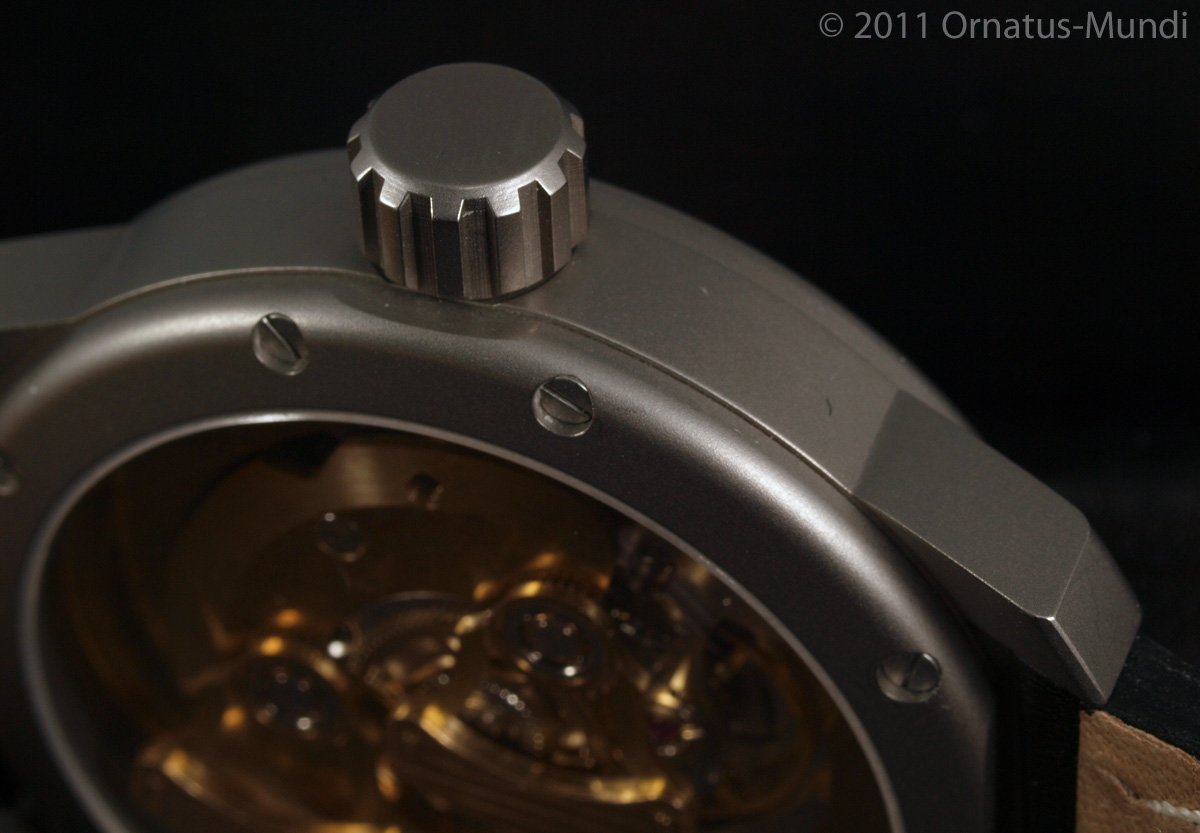 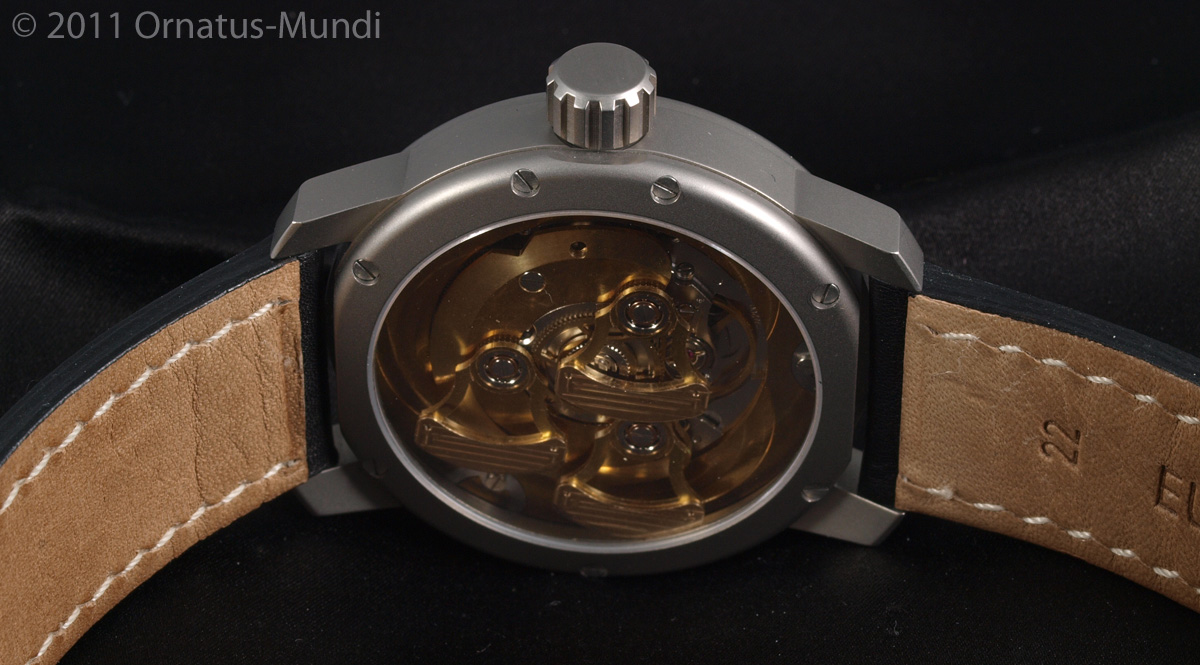 The movement is based upon the trusted and reliable ETA 2824-2. Paul modified that automatic winding system to give it his own, distinctive touch. Building upon the experience he gained with transforming the hand-wound ETA-Peseux 7001 into an automatic movement with two rotors, he wanted to go one step further and introduce an additional, third rotor! Note: this is an unfinished, prototype movement! 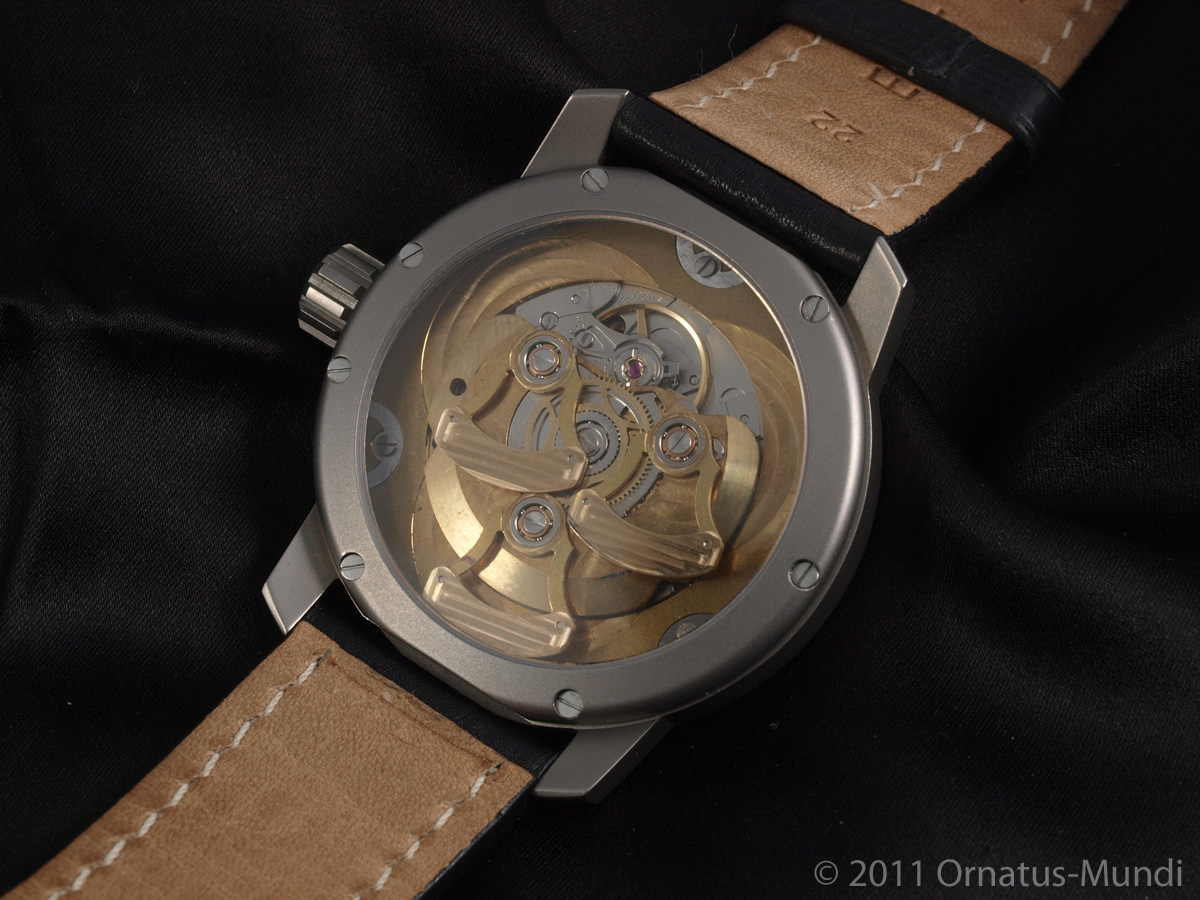 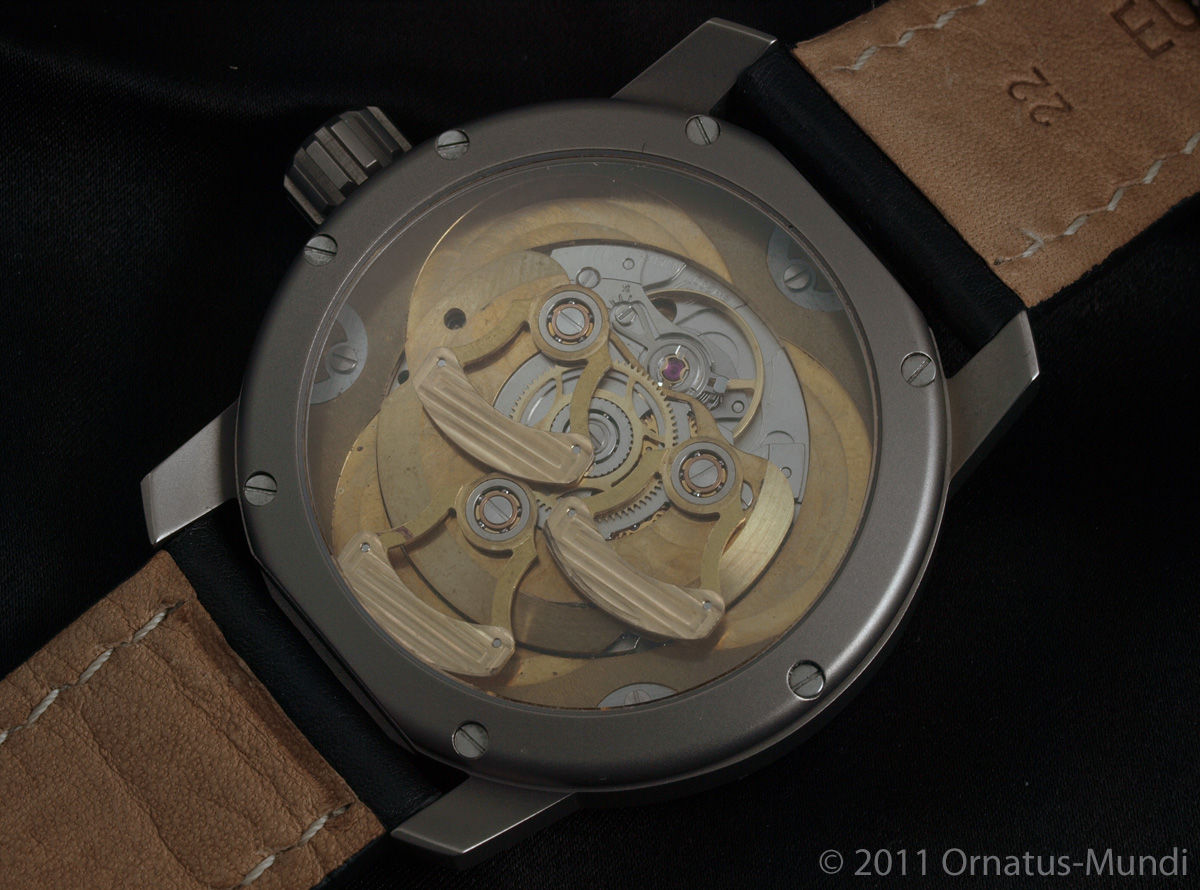 The fascinating treat is that the radii of the rotors actually overlap. Despite this, they never touch each other! 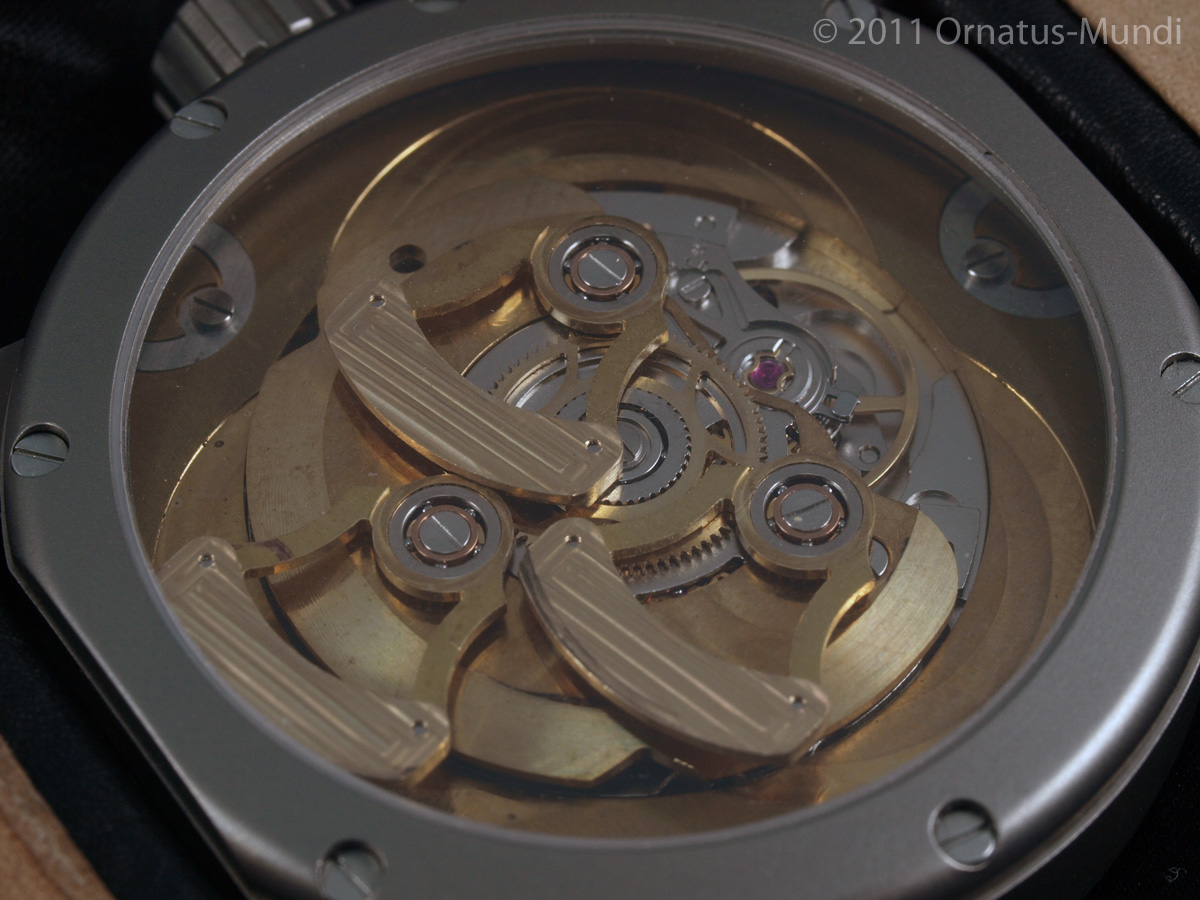 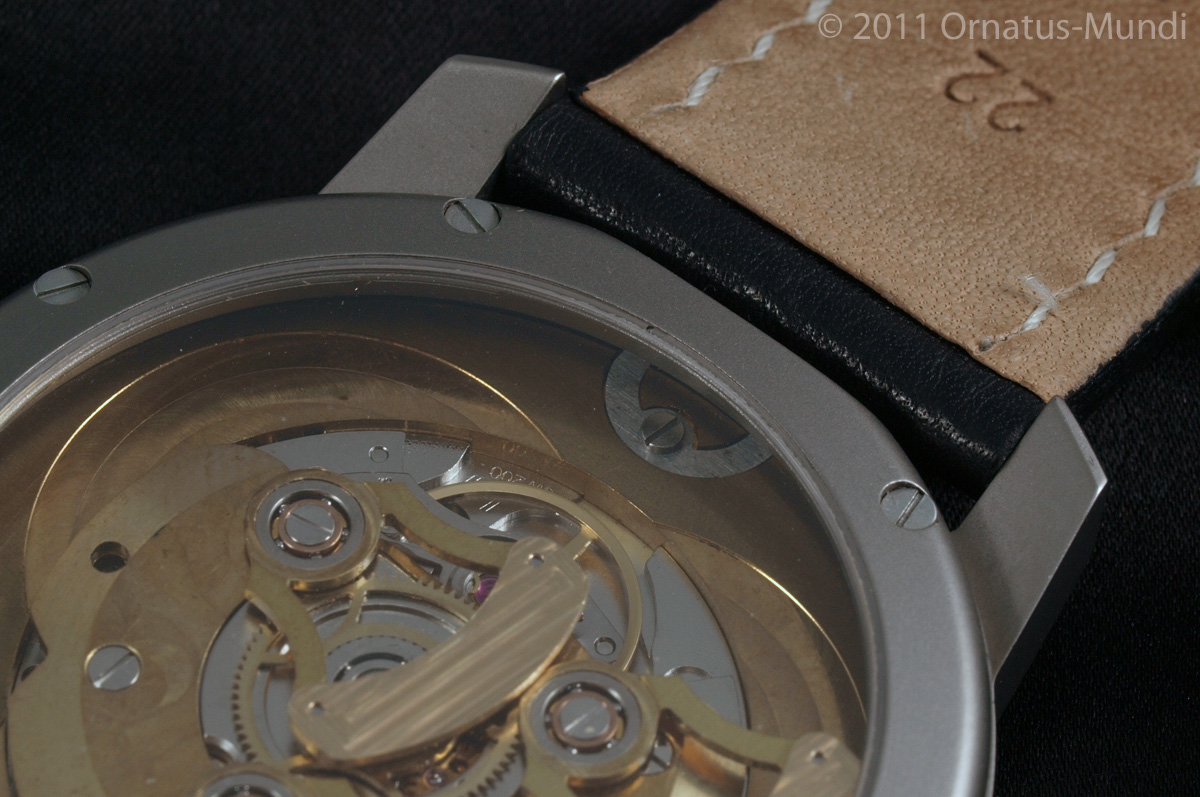 How is this achieved? Actually, its pretty simple and straightforward. It becomes obvious once the rotors are removed: 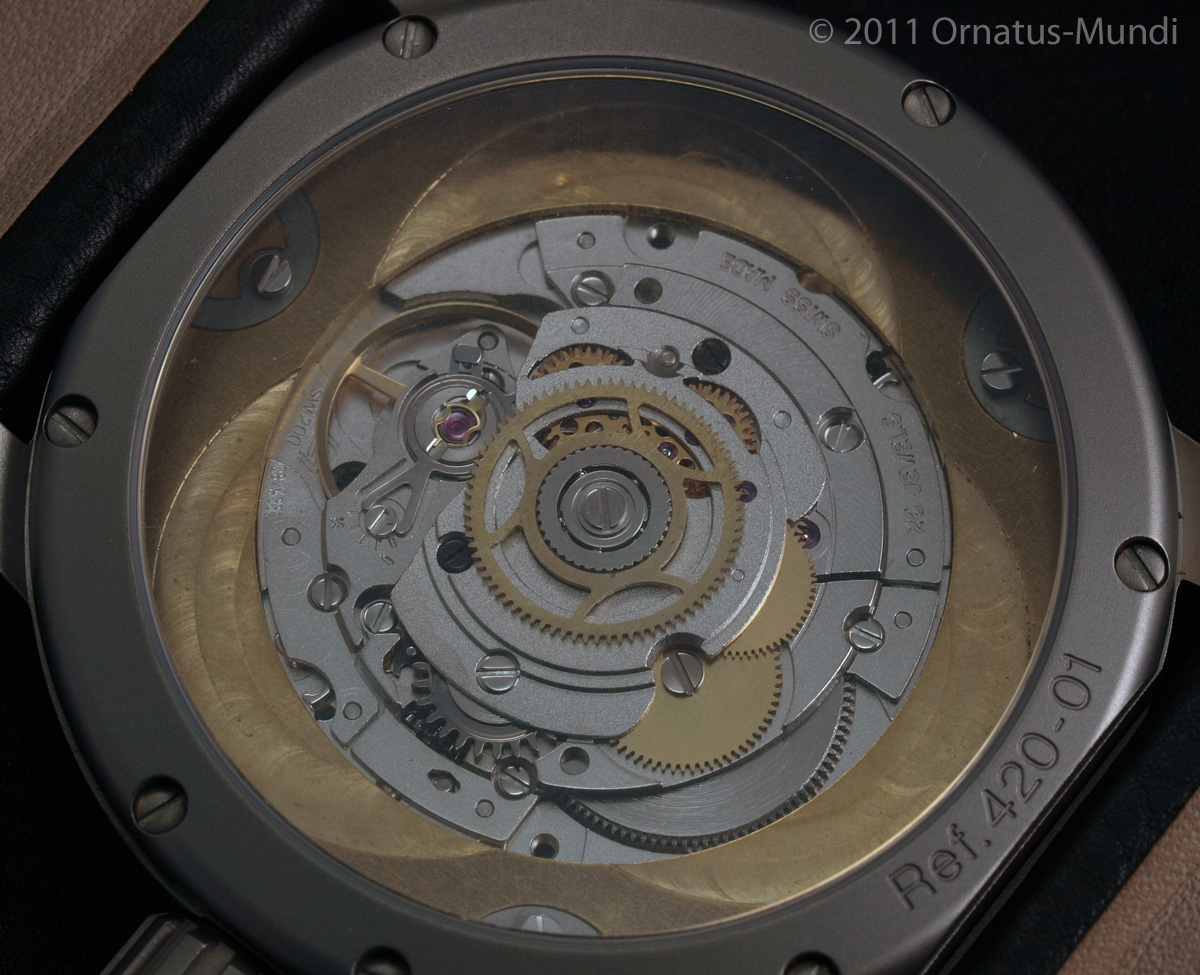 The central wheel (which replaced the original, central rotor of the ETA movement) has a double function. It not only transmits the energy to the mainspring, its also acts as the coordinator of the three rotors: Each of them is aligned in a specific angle towards the neighbouring ones. Furthermore, the shape of each rotor is optimised in order to prevent contact. 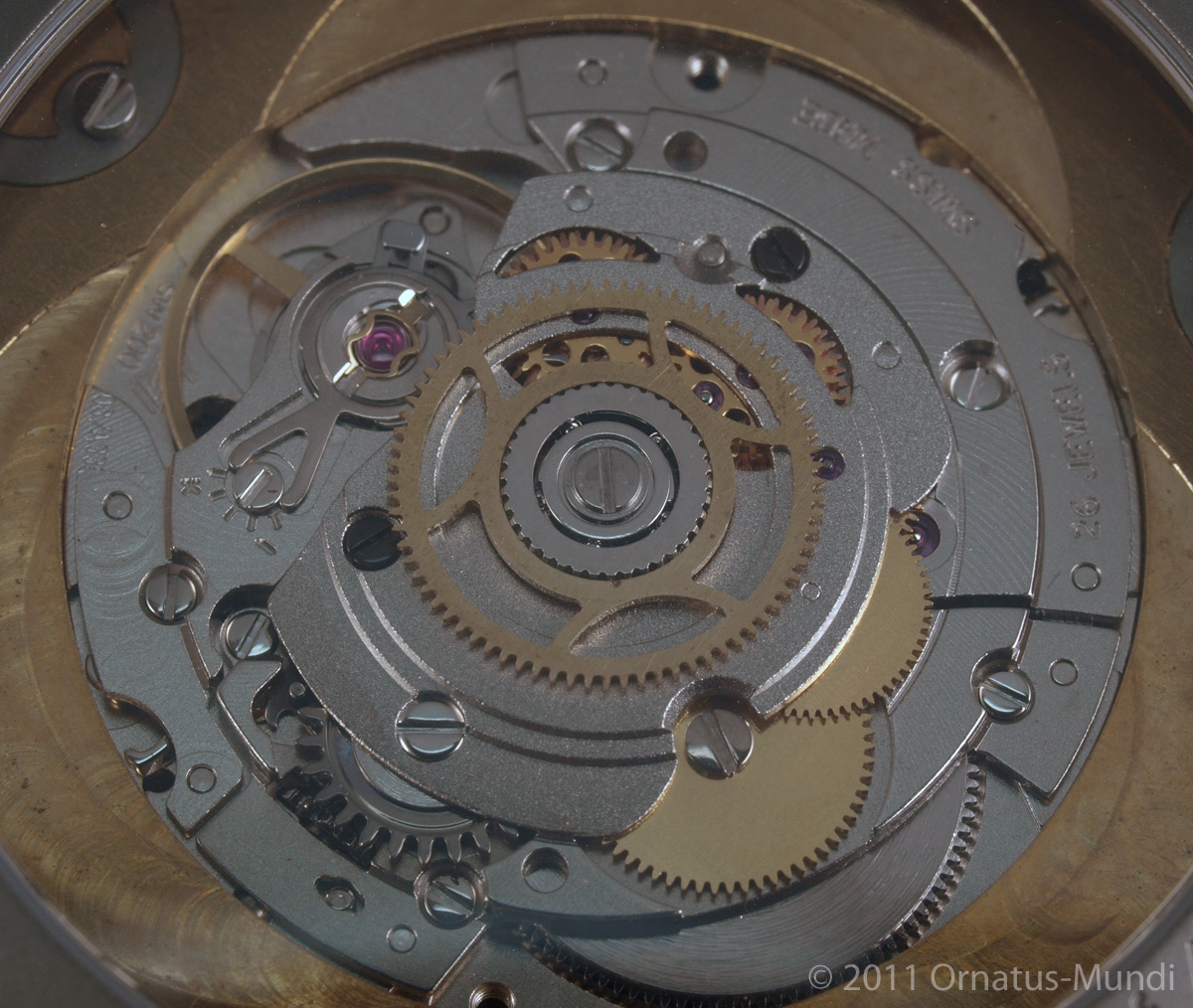 The entire changes consist of three rotors (made of 18ct gold each), three custom-made ball bearing (one/rotor) and one additional gear. That's it! Ingenious, isn't it?

Now we come to a last surprise before I post pictorials of each watch: The price! For this entirely Swiss watch (ok, the case comes from Germany) made by the hands of one of the legendary master watchmakers, modified with a unique mechanism, the price is exactly CHF 4'875.-!

I hope you liked this introduction.

All the best,
Magnus

Three times is a charm - Paul Gerber presents his Cal. 42 triple-rotor in a sporty package

By: Ornatus-Mundi : March 6th, 2011-09:11
In my recent teaser post I hinted a new watch developed by Paul Gerber. The key image was this: While it is always interesting to learn about a new watch by some of the independent watchmaking geniuses around, it gets particularly exciting if the said new...
login to reply

By: Ornatus-Mundi : March 6th, 2011-09:15
Just some more pictures, enjoy. Again, this is a prototype dial. The '3' next to the date window will be removed in the production version: Paul offers also to adorn the seconds hand with any aeronautic motif you'd like. As an example here this tri-plane:...
login to reply

Thanks for the writeup

By: Ornatus-Mundi : March 6th, 2011-09:20
what an adept name for the synchronised rotors! The white numerals and the date have the same font size. Also, this is a prototype dial. Meanwhile, Paul will, in cooperation with the dial maker, better calibrate the green Super-Luminova on hands and dial:...
login to reply

By: donizetti : March 7th, 2011-07:43
by a master watchmaker. Reminds me of the MIH watch in some respects: some idiosyncratic design decisions, but at the price, who could complain? Thanks for the nice and informative report! Best Andreas
login to reply

By: et : March 7th, 2011-12:23
this watch looks quite amazing and follows Mr. Gerber's quest for originality, simplicity and grace. plus i like the green. cheers, elliot
login to reply

By: Steve R : September 10th, 2011-20:29
Great watch.... Do you have contact information available to reach Mr Gerber. If so could you send it along my way. Thanks very much, Steve Rammer
login to reply

I'm just back from a visit in Paul Gerbers shop....

By: DonCorson : March 6th, 2011-13:36
Thanks Magnus for this intro to Pauls new watches. I am just back from a visit in his shop this afternoon, more pictures and info coming up soon! Don
login to reply

By: aldossari_faisal : March 6th, 2011-13:42
Finally the report on the awaited watches.... then the wait will carry on as im looking forward for the finished movement pics , interesting to be able to have the essence of masterwatch maker Paul Gerber on the wrist in a more durable watch " in terms of...
login to reply

What luminova colour are you interested in Faisal? [nt]

humm i would say

By: aldossari_faisal : March 7th, 2011-08:15
white and off white , white and cream , white on sky blue , white on " faint orange which has hints of beige to it" or faint salmon orange... white on grey... or simply to go lunatic and use combination of colors such as those of LEGO . i know all the lis...
login to reply

I like the green. Orange would be my second choice.

Wow! the Synchron is great.

By: jporos : March 6th, 2011-14:28
I really appreciate Paul Gerber going toward a more modern styling ala the MIH watch. Wearing the MIH must have had its effect on him (as well as the Ochs and Junior work). Can't wait to see a video with the triple rotor in action.
login to reply

By: takashi78 : March 6th, 2011-22:22
I think the date window on the pilot has to go, i think it disturbs the harmony of the dial. I like the other one better. Would be interesting to see different dial color options.
login to reply

By: monochrome : March 6th, 2011-22:52
I'm amazed to see yet another added rotor, well... actually we could have expected something like this from Paul Gerber. But the price is absolutely incredible. This way Haute Horlogerie is within reach for much more aficionados. Love to see the final fin...
login to reply

Thanks for your replies - a few answers...

By: Ornatus-Mundi : March 6th, 2011-23:37
1.) Preis: Yes, it is incl. VAT. 2.) Colours («synchron»): In principle, many colours are possible, even a 'black-in-black' version could be done. However, Paul's choice for the time is green, and for other versions there would be a significant number of ...
login to reply

By: aldossari_faisal : March 7th, 2011-00:06
for answering all the questions , from what you are saying i understand that there will be no , nodate pilot watch?! Faisal
login to reply

By: Ornatus-Mundi : March 7th, 2011-02:08
its not planned (at least no communicated to me) yet. For me, one of the charms of independent watchmaking is that these masters (well, most of them ;-) follow their own inspirations and tastes, not necessarily what market research or marketing suggests. ...
login to reply

By: RobCH : March 7th, 2011-02:07
Thanks Marcus! I quite like the green one, love the case design similarities to the MIH, of which I've always been a fan! Might have to put in an order...can't go wrong at that price!
login to reply

it looks perfectly classic BUT

By: Mostel : March 12th, 2011-19:21
with a watch that adheres to the idea/design of strength, I think Paul's LOGO in the little curve, feels light and lightweight... unserious... it may be that Mr. gerber is a funny/unserious person in real life, but I'd like to see his name written in a st...
login to reply

By: Gary G : March 7th, 2011-05:44
Very exciting stuff! I too like the green one quite a lot -- looks like fun, and very clean as well. Unlike some others, I like the calendar window -- seems I look for the date more and more these days... Best, Gary G
login to reply

Paul just sent me a video...

Very interesting. Thanks for the video. [nt]

By: BDLJ : March 7th, 2011-17:12
....efficient is this triple-rotor? On one hand you may have the equivalent inertia of 3 microrotors, but unless they mesh in perfect synchronicity with the centre wheel, I can enivsage them working against each other in the initial motion...? In any case...
login to reply

It should load and play automatically...

By: barge : March 9th, 2011-00:36
Paul gerber makes some very interesting watches, and these are no exception. I am looking forward to seeing them in Basel. For someone living in Zürich, I hope to have a Gerber piece at some point.
login to reply

Question... what is the advantage of 3 rotors...

By: Ornatus-Mundi : March 14th, 2011-02:03
Dear Bart, Paul Gerber's watchmaking philosophy is full of wit. He also tries to incorporate mechanisms where there is literally no space. 3 rotors instead of one, doing the same thing, but with much more drama! Cheers, Magnus
login to reply

By: Tom the Tinkerer : March 24th, 2011-04:13
Thanks for the report Magnus, I've long been an admirer of Mr Gerber, the MIH being a watch that I hope to have one of one day.. I hadn't been aware of his model aircraft hobby.. though I'm more partial to RC helicopters and aerobatic planes, I'm starting...
login to reply