By: KMII : January 30th, 2018-07:37
When we are talking about haute horlogerie from Montblanc, it is most frequently the Villeret and 1858 lines that are being discussed. In addition to those, there are complicated pieces in the Heritage Chronometrie and 4810 lines, too (here: www.watchprosite.com for a summary of some 2017 novelties in the 4810 collection). A while ago I had the opportunity to play with one specimen from the former line, namely the Heritage Chronometrie ExoTourbillon Minute Chronograph.
The piece combines a one minute exo-tourbillon with a chronograph and a date display and is limited to 88 pieces in this rose gold version (three further versions exist - a white gold Vasco da Gama (60 pieces), as well as a WG and RG Vasco da Gama diamond set ones (25 and 28 pieces respectively)).
The movement powering the watch is a Montblanc MB R230 in-house caliber, which has been designed on the MB R200 architecture of the brand's iconic Nicolas Rieussec line - Montblanc's first in-house chronograph movement. This means an automatic-wind column wheel chronograph with vertical coupling, enirched here with a date pointer display and Montblanc's One minute ExoTourbillon. As opposed to the R200 base caliber the beat rate is 21.600 vph in this iteration and the power reserve 50 hours instead of 72 hours. As is standard with the Nicolas Rieussec based chronographs, there is no central seconds hand but two subdials - one for the 60 seconds, and a second one for the thirty minutes totalizer. As opposed to the standard R200 movement, you do not need to leave the chronograph running to have an ersatz-running seconds - this function is taken on by the tourbillon at 6 o'clock here. The chronograph operation is a monopusher affair, with the pusher being placed at the Nicolas Rieussec typical 8 o'clock position and similarly smooth in operation. The same movement is also used in the TimeWalker ExoTourbillon Minute Chronograph.
In addition to the movement, the real USP of the watch is the wonderful black aventurine dial. Definitely something that will captivate you every time you glance at the watch and therefore a real highlight. Darker and perhaps more classical than the blue aventurine in the 4810 ExoTourbillon Slim (here: www.watchprosite.com for more) it sparkles and shimmers and offers a wonderful distraction for when you need it (great fun when playing with light). Black aventurine also appears to be rarer and more difficult to source than the more conventional green, grey, blue, orange, brown or yellow. The ensemble is then completed by a 0,109ct Montblanc cut diamond at the 12 o'clock position.
At the same time, the overall composition remains suitably subdued, so that you can easily use the piece as a dress watch. It is far from dainty at 44mm x 14,79mm (the latter due to the relatively thick movement, at 8,65mm) but wears well even on smaller wrists, irrespective. The lugs on its RG case are not short, they are nicely downturned, though, placing the watch securely on the wearer's wrist. For wearers appreciating a certain heft on their wrists, it will work just fine. 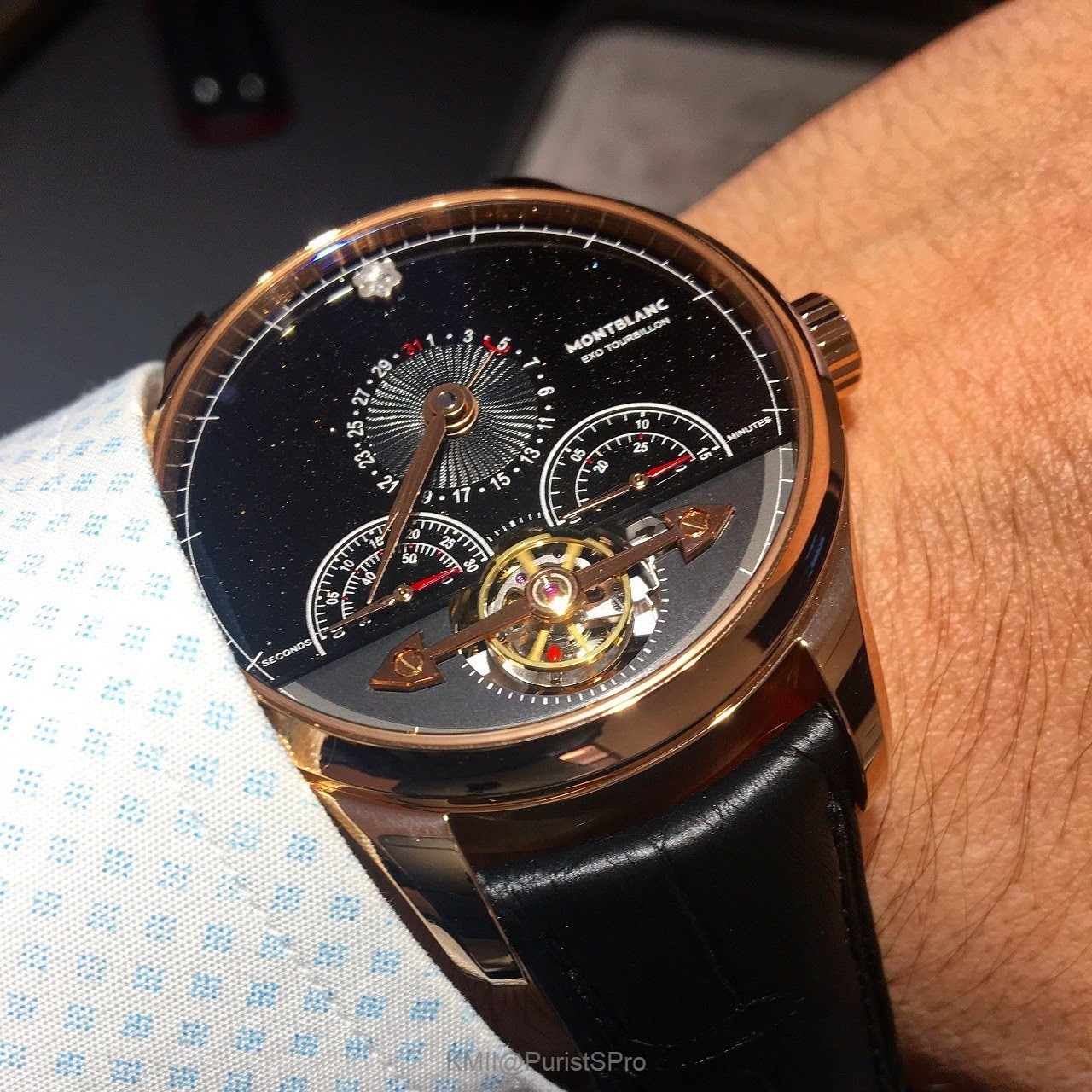 Comparing the watch to the Vintage Tachydate that was on display at the same time (and is in the same price segment), there are some clear differences. While the size and case finishing on both is comparable, the two most likely appeal to very different buyer segments and there is unlikely to be a lot of cross shopping between the two. The Heritage Chronometrie ExoTourbillon Minute Chronograph is bold, where the Vintage Tachydate is subdued, modern in conception, where the other is very traditional. The one offers a visually interesting tourbillon complication, aventurine dial and all the fireworks up front, while the other needs to be turned around for the real charm and the intricate finishing of its MB M16.32 movement to shine through. One is always likely to be noticed, while the other will most certainly fly under the radar - unless you happen to chance upon a watch enthusiast.
I find it is a good choice for Montblanc to cover both bases and to offer a solution for customers residing in both camps. Feeling more at home in the 'stealthy approach to watches' group myself, I am naturally drawn to the Vintage Tachydate but at the same time appreciate the Heritage Chronometrie ExoTourbillon Minute Chronograph for its dedication to modernity. 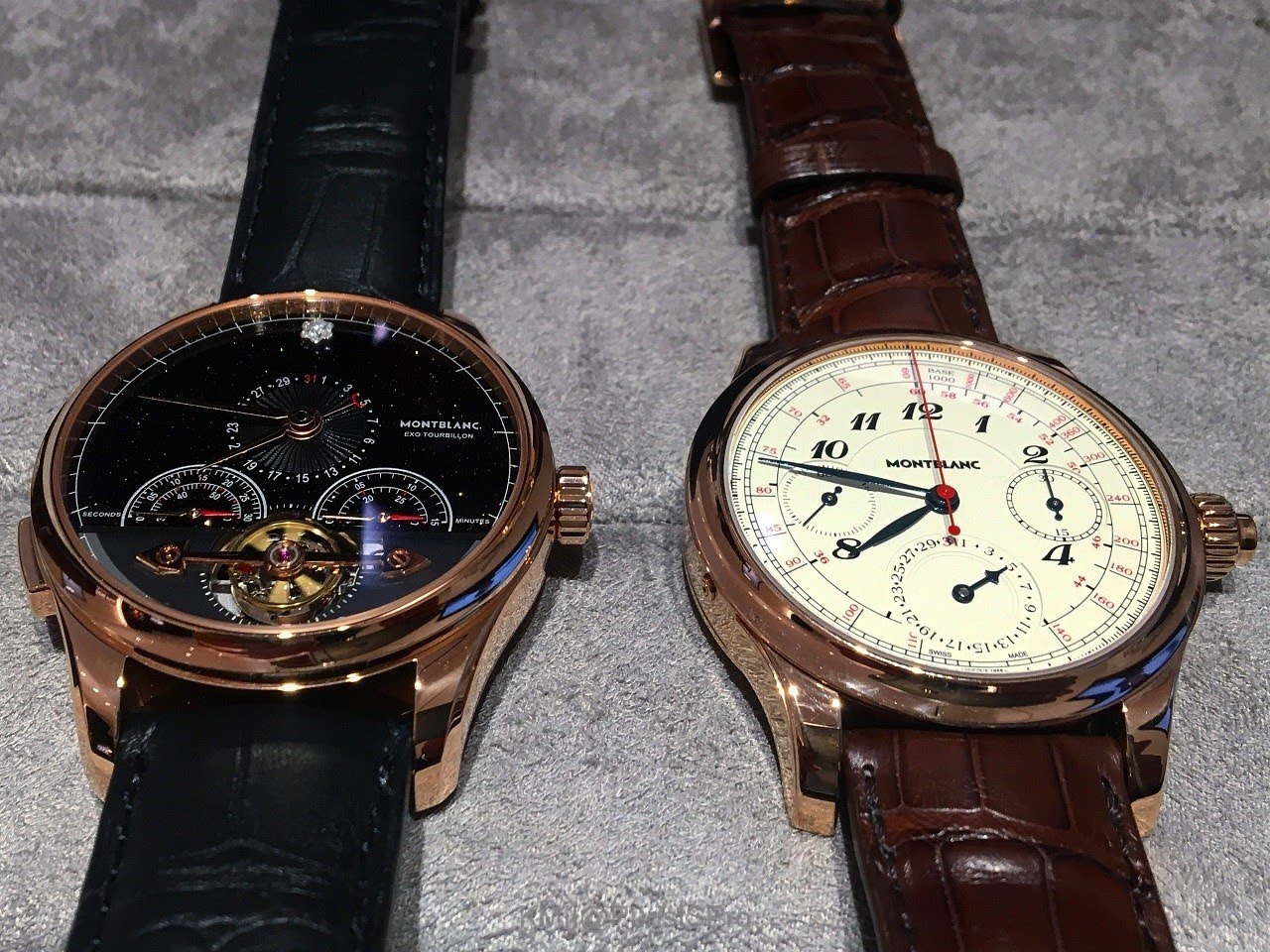 Thanks for viewing!
login to reply

By: Alkiro1 : January 30th, 2018-08:03
Nevertheless, I regret that all the sub dials are too concentrated and a too small ExoTourbillon for the case size of this timepiece in my opinion.

It’s a little bit like if Montblanc didn’t know which element of its watch they wanted to highlight (Aventurine, Tourbillon, sub date dial...).

This dial mainly lacks of “breathing” for me. A better layout and it would have been much much better in my opinion. My two cents.

By: KMII : January 30th, 2018-08:28
The overall R200 architecture only allows for a certain layout, I guess. Do you prefer the overall balance of the TimeWalker ExoTourbillon Minute Chronograph, which uses the same movement?
Thanks for your input, Alkiro!
login to reply

By: TheMadDruid : January 30th, 2018-17:57
Not just thorough, but you make interesting points when you compare the watch under the microscope with others from the same brand; or with similar complications.
login to reply

Thanks for the review.

When I saw the photo, my initial though was: "He should have wiped the dust off the glass,"

Then, I realised it was not dust on the glass but the cosmic highlights on aventurine dial.

I like the Rieussec chronograph layout that works well for that model but adding a tourbillon is distracting.

The good news is that the tourbillon does not affect the reading of the chronograph counters.

Overall, with that Montblanc Star diamond and the cosmic dust, I think this is a "fun piece" to be brought out for special occasions rather than a daily wearer.

By: KMII : February 1st, 2018-22:22
Definitely agree with you in your verdict - fun piece for special moments! And on the issue of the tourbillon being a tad distracting while not harming the chronograph readability at the same time.
login to reply