Montblanc itself - in spite of being 111 years old - is a fairly new hand at watch making. At least if you consider the original operation, prior to acquiring Minerva in 2006 (which dates back to 1858). The history started in 1997 and about 10 years later the iconic in house movement for the Nicolas Rieussec formed the next great leap.

At the same time, however, Montblanc was not averse to using high quality movements from outside for their high end pieces - a common practice in the industry up until very recently.
One such watch - the pinnacle of the pre-Villeret era I believe - has been the Star Chrono GMT Perpetual Calendar Limited Edition 100, launched in celebration of the brand's 100th Anniversary in 2006. 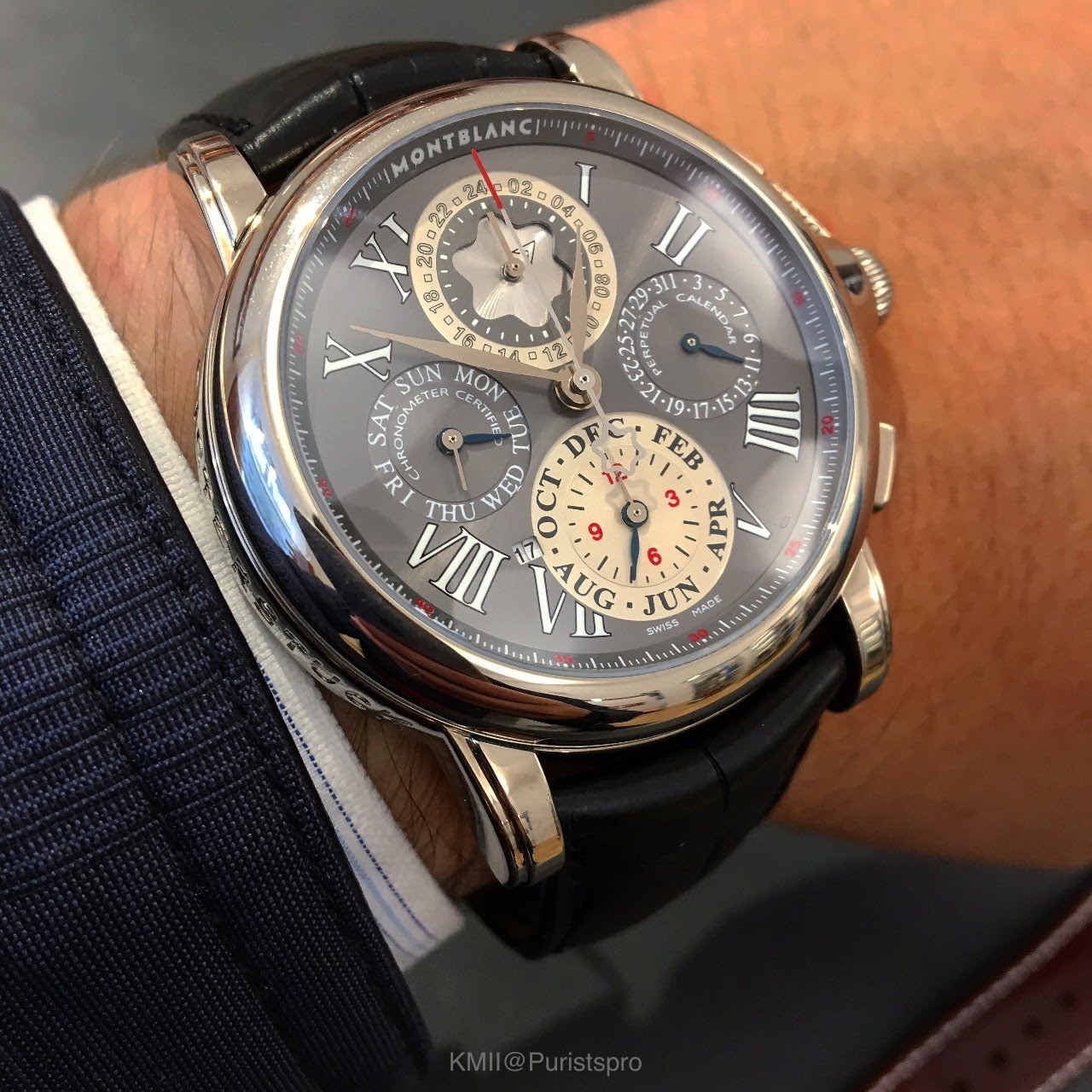 The combination of complications was a serious statement of intent, as were individual details, such as the 43 faceted 'Montblanc cut' 0,55ct diamond gracing the crown. The six sided glacier design motif has been applied elsewhere, too, such as for the counterweight on the chronograph seconds hand, or on the GMT subdial.
The watch is definitely a presence on the wrist, with its 43mm diameter (not wearing smaller, even if the lug design ensures it is a comfortable fit even on slimmer wrists) and gold / platinum weight (there were 100 each in WG, YG, RG and 3 in Pt). 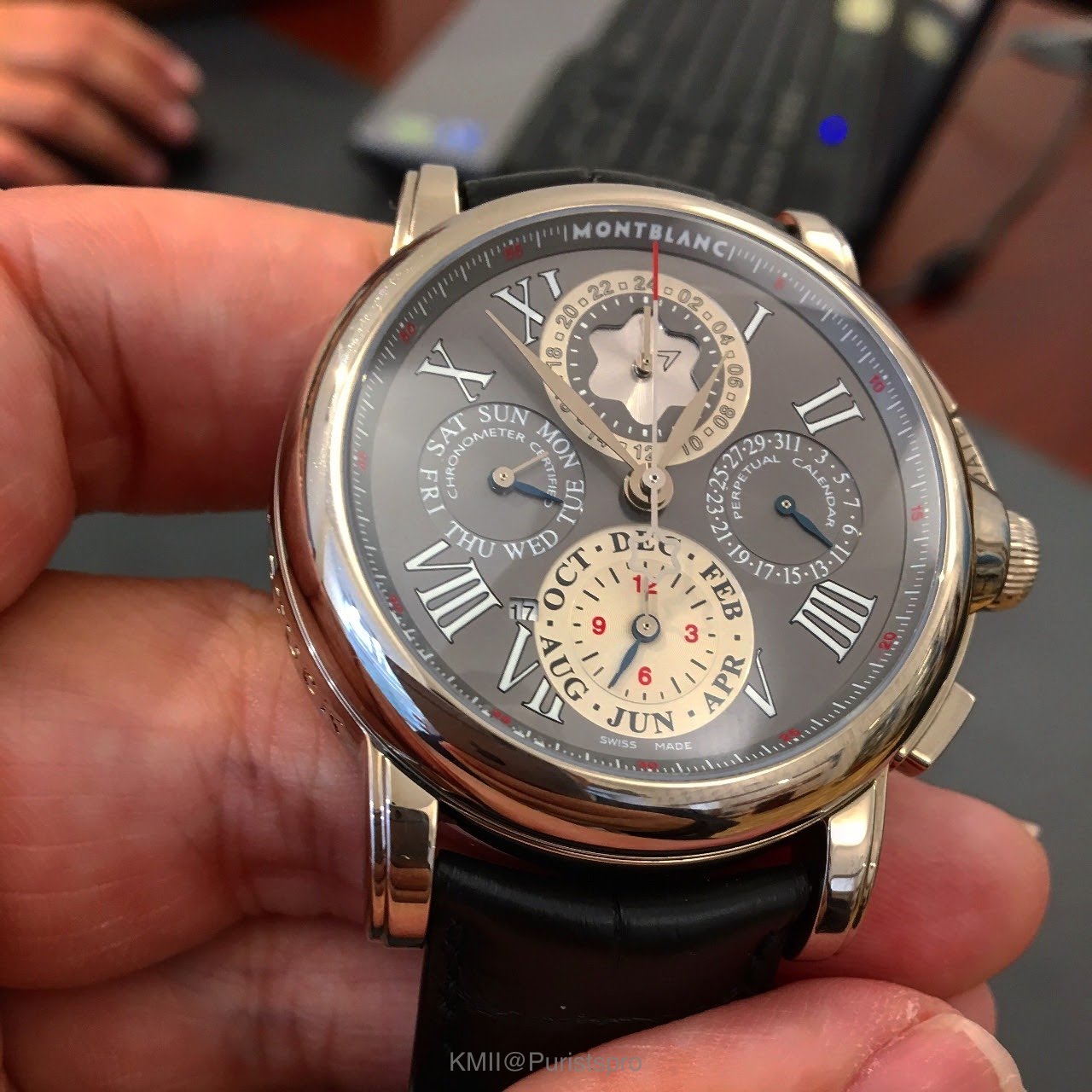 The movement is nicely finished but not quite the masterpiece one got used to from the Villeret manufacture in the years since.
The watch makes for an interesting historical piece from Montblanc in my opinion, from an era we rarely discuss. In spite of its intent and definite appeal, events following its introduction, such as the acquisition of Minerva or the launch of the in-house chronograph movement have perhaps overshadowed what is quite a fine watch.
Any owners out here, or people handling one at SIHH 2006 or thereafter? Opinions?
Was definitely a pleasant surprise finding one, in NOS condition and researching its history subsequently.
Thanks for viewing!

First time I see this timepiece. Thanks for the discovery and info about it my friend

Glad you found it interesting, Alkiro!

Absolutely agree with you. And that’s really a pleasure to discover such timepieces almost everyday here 😉

And it’s a true success my friend 😉

By: mkt33 : November 4th, 2017-18:02
(US patent # 7404669B2). It allows the owner to have two fold control function with the crown in the same axial position making it possible, for instance, to control a timezone function when the crown is rotated in the first direction, and a date setting ...
login to reply

Thanks for adding this detail, Mike!

By: KMII : November 5th, 2017-00:20
Was not aware of it. Would you happen to also know who provided the movement for the watch? Have a great Sunday!
login to reply

By: KMII : November 25th, 2017-03:34
A modular movement appears logical, given the thickness. I unfortunately did not take a movement shot to have one of you pinpoint the origin... Will check if the seller still has it, and try and take a shot
login to reply

Thx for this interesting read !.. Very nice pics as well. !.. So do I read you correctly, it is..

By: KMII : November 26th, 2017-10:37
Not quite. It’s something I discovered in a watch shop recently and then decided to investigate, as I found nothing on it here I can give you a hint where it can be found, though. I guess personally I‘d be more likely to go for an 1858 Tachymeter, even if...
login to reply

Let’s change the approach then...

By: KMII : November 26th, 2017-11:39
We can meet for a drink when you return from the warmth of where you are now and have a look at it together beforehand
login to reply

I was looking for a perpetual calendar watch in 2008

By: MTF : November 28th, 2017-00:08
I think a watch buddy and I looked at this in Singapore when we both were looking for perpetual calendar watches. He was almost tempted because it is pretty and the price was reasonable. [This chap thinks A. Lange & Söhne Lange 31 and Zeitwerk are nor...
login to reply

You are the third person here...

By: KMII : November 28th, 2017-12:15
Who seems to have seen this one live Quite a rare bird and not nearly as well known as their Villeret pieces from the subsequent years. Could be that as we did not cover the brand back then...
login to reply

We did not carry smartphones with cameras in those days

By: MTF : November 28th, 2017-19:33
Well...we carried Blackberry but the camera resolution in those was inconsequential. Also, I lived in Singapore then and nearly every type of watch can be found there. Regards, MTF
login to reply

By: KMII : November 28th, 2017-22:04
Seeing the offer in Singapore for the first time is quite overwhelming. Feels like there are as many watch stores there as there are in all of Europe
login to reply

And did you come back home with it? [nt]

That’s quite a find!