The famous Swiss watch retailer Guebelin (www.guebelin.ch) just announce the presentation of the impressive three-axis Tourbillon Turbulences to celebrate the 150 year anniversary of the company. It was made by the well-known if not famous master watchmakers Richard Daners and Marion Mueller, who craft the pieces uniques, a speciality of Guebelin (I think I do not have to tell much about Richard Daners, who maybe the greatest watchmaker living on earth). 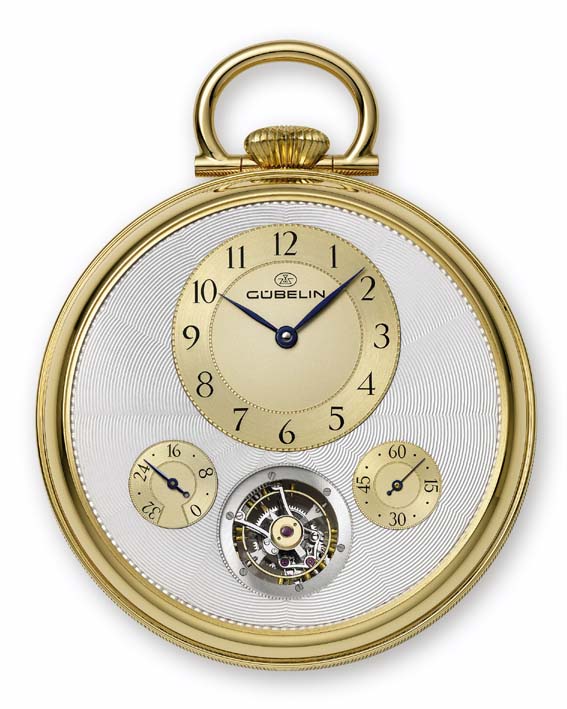 A quote from the press release:
To celebrate the 150th anniversary of the company G?belin?s watchmakers have come up with a world premiere. It is a pocket watch conceived and made by the master watchmakers Richard Daners and Marion M?ller. The two will amaze the experts with a construction that even amongst watchmakers has been deemed impossible: a tourbillon that rotates around three axles in a rectangular position to each other.
The tourbillon, invented by Abraham Louis Breguet in 1795, even today represents one of the greatest challenges any traditional master watchmaker can think of. The watchmaker of Swiss origin, probably the most famous of his kind, had devised the construction in his Paris workshops in order to gain the utmost in precision from his pocket watches. The constant influence of the earth?s gravity resulted in a lack of precision of the watches that were usually worn in a vertical position in vests and jackets. This default is due to the fact that it is virtually impossible to counterbalance the balance wheel and its hairspring. Breguet?s tourbillon put an end to this problem by guaranteeing that balance wheel, hairspring and escapement fulfil one rotation around their common axis, thereby neutralizing all inherent balance errors.

This rule still applies today, however only if the watch is always worn in a vertical position. Richard Daners and Marion M?ller have built a tourbillon that eliminates the so-called gravitational error, no matter in which position the watch is worn.

Of course, in times when even the cheapest quartz watch achieves excellent results of precision, it may seem superfluous to come up with extravagant constructions in order to render the mechanical watch even more reliable. Bringing forward this masterpiece the G?belin ateliers demonstrate their willingness to venture upon the challenge of the impossible. The difficulty of developing a tourbillon on three axes only becomes obvious if one realizes how tiny the forces are at the end of the gear train of a mechanical movement. The escape wheel that transmits its impulse to the balance wheel via the pallets has just enough strength to move the tip of an eider down.

The movement of the golden pocket watch is symmetrical in its construction and is driven by two spring barrels under one common bridge. The gears are mostly hidden in order not to draw the attention from the three-dimensional tourbillon. Like a skeletized globe it is suspended freely above an opening in the base plate. Viewing the dial of the watch the delicate tourbillon can be seen through this circular hole. It is only from the rear that one discerns the whole glory of the mechanism. A large transparent caseback made of mineral glass allows a breathtaking view of the tourbillon?s complexity.

The see-through cage is driven via an invisible circular cogwheel sustained by a large precision ball bearing, arranged around the opening in the base plate. The lightweight cage turns around the first axis, perpendicular to the plate once in 135 seconds. It takes it 45 seconds to turn in its second axis. The escapement finally, situated in the innermost cage, accomplishes one full turn in a minute. Its axis again is always at a right angle to the second axis. Thus the observer sees an ever-changing image in continuous motion. The differences in running time of the three cages have the effect that it takes nine minutes until they all come back to their initial position for just one short moment. The main cage of the tourbillon is suspended on one side only, which results in a so-called flying tourbillon. Therefore the axis on which it turns is invisible. By this the construction obtains a mysterious weightlessness. While trying to follow the complex movements of the tourbillon the observer will become aware of how his or her eyes try to dive into the gears to comprehend what can be seen. This is no easy task, seeing that we are used to gear trains with parallel axles, but none in which their position continually changes. 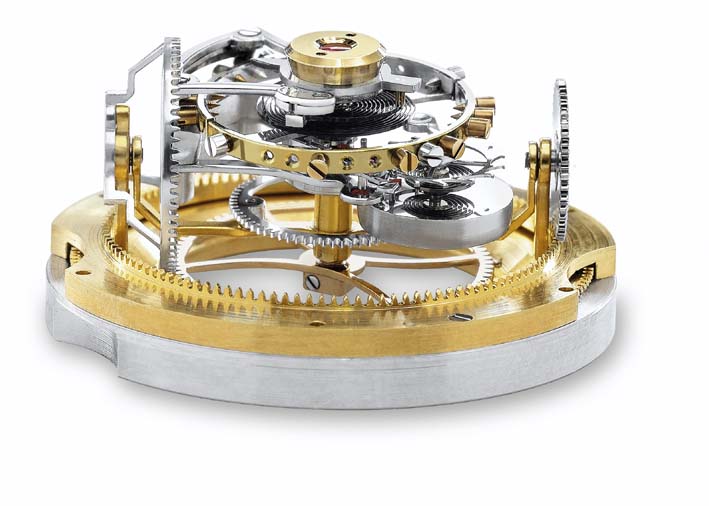 To round off the complexity of their masterpiece the two G?belin watchmakers have equipped their escapement with a device that furnishes it with a constant amount of energy independent from the force stored in the spring barrels. The contrivance relies on the principle of inertia and is a solution that is equally ingenious as simple, based on a 1943 invention by Henry Jeanneret. It ensures that the escape wheel at the moment of release does not get its force directly from the spring barrels, but indirectly from a spiralled hairspring that acts similarly as a buffer in computer technology. It is regularly armed via the gear train as soon as the escape wheel is stopped again. If it were not for the hairspring, the escape wheel would rotate freely on its pinion. The pinion bears a small platinum weight whose inertia guarantees that the entire gear train only starts moving with a certain delay after the release of the escape wheel. At the moment of its release the escape wheel, armed by the spiral spring, immediately hurries off, only being followed by its pinion when it has already stopped again.

This watch, punctually accomplished for the 150th anniversary of G?belin, apart from the obvious proof of ability, bears symbolic weight for the firm with its long tradition. It shows that even in troubled times it pays to persevere in those matters that one masters best.

I hope this masterpiece gets your applause!

By: Ornatus-Mundi : February 7th, 2004-10:10
Dear All! The famous Swiss watch retailer Guebelin (www.guebelin.ch) just announce the presentation of the impressive three-axis Tourbillon Turbulences to celebrate the 150 year anniversary of the company. It was made by the well-known if not famous maste...
login to reply

amazing! thanks Magnus, so how much do three axes of rotation cost (roughly)? :) (nt)

Is there a significant difference between the previous works

A stunning watch and technically superb

By: IanS : February 8th, 2004-10:22
Could you please tell us the differences between this and the other 2 3D tourbillons - or is it using one of the other systems under licience?
login to reply

Why Triple Torque ? Is it just for the alliteration,

it rotates along three different axes

By: ei8htohms : February 10th, 2004-03:03
Hi Ian, The two dual axis torubillon released last year were just that: rotating along two axes. The escapement in this piece rotates along three axes. In that way it is similar to Thomas Prescher's latest creation, the most dramatic difference being that...
login to reply

By: IanS : February 10th, 2004-04:04
correlation between the 3 axes and 3 torques.Doesn't one barrel equal one provider of torque? Two barrels, two torques? It might even be argued in this twin barrel setup, that there is in fact only one torque driving the mechanism - if I understand it cor...
login to reply

It is a Three Torque Tourbillon (I know that no one else is surprised).

?? What are you torque-ing about?

By: Thomas Prescher : February 11th, 2004-08:20
Dear John, if we take a ballbearing flying The correct description should be. G?belin two axis fling TAT three axis flying. How do you think about it? Thomas
login to reply

yes, I think that is more correct