Hands on review of the Lange & Söhne Lange One Timezone 2020

The new Lange & Söhne Lange One Timezone was introduced in early summer. It is an evolution of an existing model from 2005 with a new movement and some small display improvements. Let's be clear: from an aesthetic point of view, the Lange One Timezone 2020 is not radically different from its predecessor, but the Saxon manufacture took the opportunity to unveil a white gold version with a black dial that I like very much. Maybe that's the real novelty at the end of the day... The two other versions of this new model are in pink gold with a silver dial or yellow gold with a champagne dial in the context of a limited series of 100 pieces for the latter.

Contrary to what its peripheral city ring suggests, the Lange One Timezone is not a Worldtimer watch but a complex dual timezone watch. It allows the simultaneous display of home time and the time of a second time zone chosen from among the 24 time zones represented on the ring. It takes advantage of the dial organization typical of the Lange One with off-centered display, the second time zone display being housed in the area traditionally dedicated to the second hand. The latter is found in a small indicator at 6 o'clock on the main sub-dial. 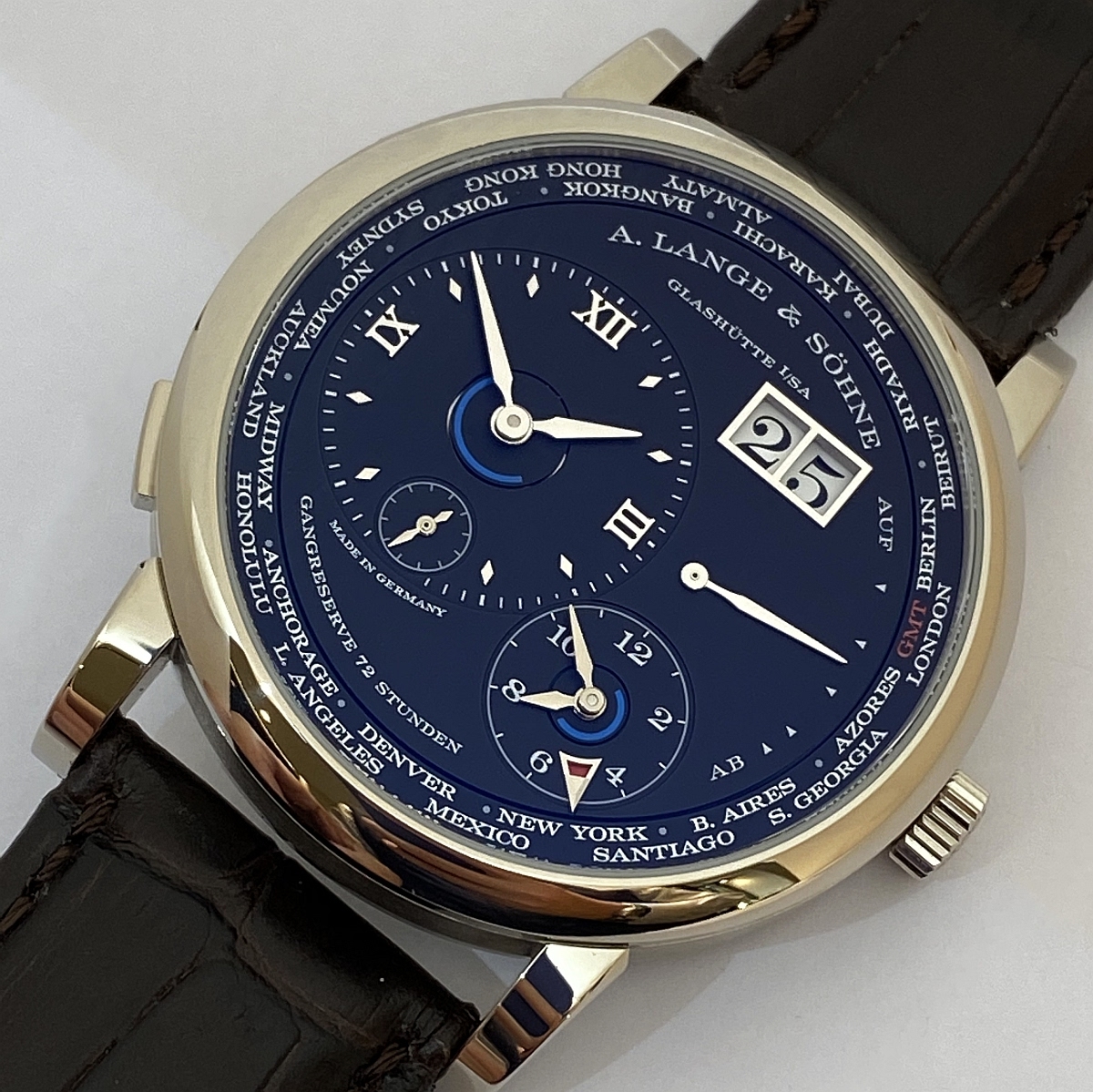 It is important to remember that the Lange One Timezone is more of a watch for people with frequent contacts abroad than a real travel watch. Indeed, the main display is the one dedicated to the home time and the subsidiary display is assigned to the second time zone. When the pusher is pressed, the hour hand of this secondary display moves. This is generally not the convention we apply for a travel watch. The main display is then dedicated to the time of the place where we are and the secondary display is the home time... to avoid calling your family at 3 o'clock in the morning.

But after all, it doesn't matter and that's the point of such a watch: you can do what you want with it. But now that we're all stuck at home and travel is just a mirage, the Lange One Timezone makes even more sense. 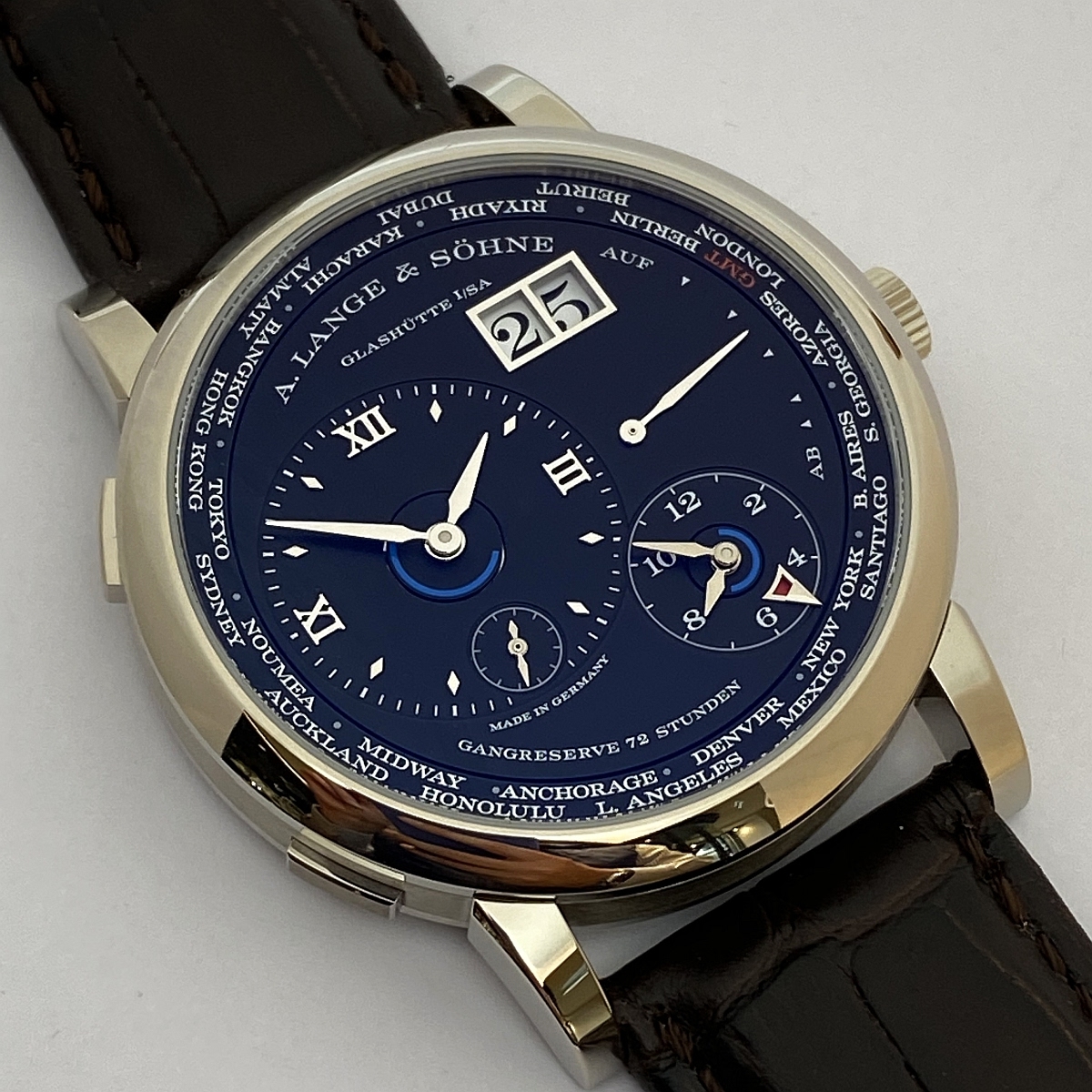 So what are the changes between the 2005 version and the 2020 version? There are two dial sides. The first modification is relative to the day and night range indicator. This double indicator that applies to both displays is now better integrated. The small arrow that used to turn and indicate the night time range (from 6 p.m. to 6 a.m.) is replaced by a disc that makes one complete revolution in 24 hours positioned at the base of the hand axis of the two displays. The result is more elegant and above all more legible because it is directly related to the hour hand. The second modification is the presence of a daylight saving time indicator in the 5 o'clock arrow of the auxiliary display which is used to determine the reference city of the time zone used. If the indicator is red, the country of the reference city uses the daylight saving time system. In this case, it will be necessary to add one hour during certain periods of the year (from spring to fall for the northern hemisphere and from late summer to spring for the southern hemisphere). On the other hand, if the reference city keeps the standard system throughout the year, the indicator remains clear. Lange & Söhne has therefore inserted a small additional function.

The L141.1 movement that powers the Lange One Timezone 2020 is part of the new generation of single barrel and in-house hairspring movements. In fact, it's as if the feeling of looking at the dial is repeated: we feel like we're looking at the same caliber again, but it's not quite the same. Aesthetically speaking, the bridge of the escapement wheel makes it possible to distinguish them. And if the two generations of movements have identical diameters (34.1mm), their architecture is different. The 3/4 plate of the L141.1 caliber is larger than that of the L031.1 caliber of the 2005 watch. So by looking at the movement at the back of the watch, the new caliber seems larger than the old one. For the rest, I find the same integration of the second time zone mechanism with its engraved bridge that embellishes the movement by making it more sophisticated and refined. 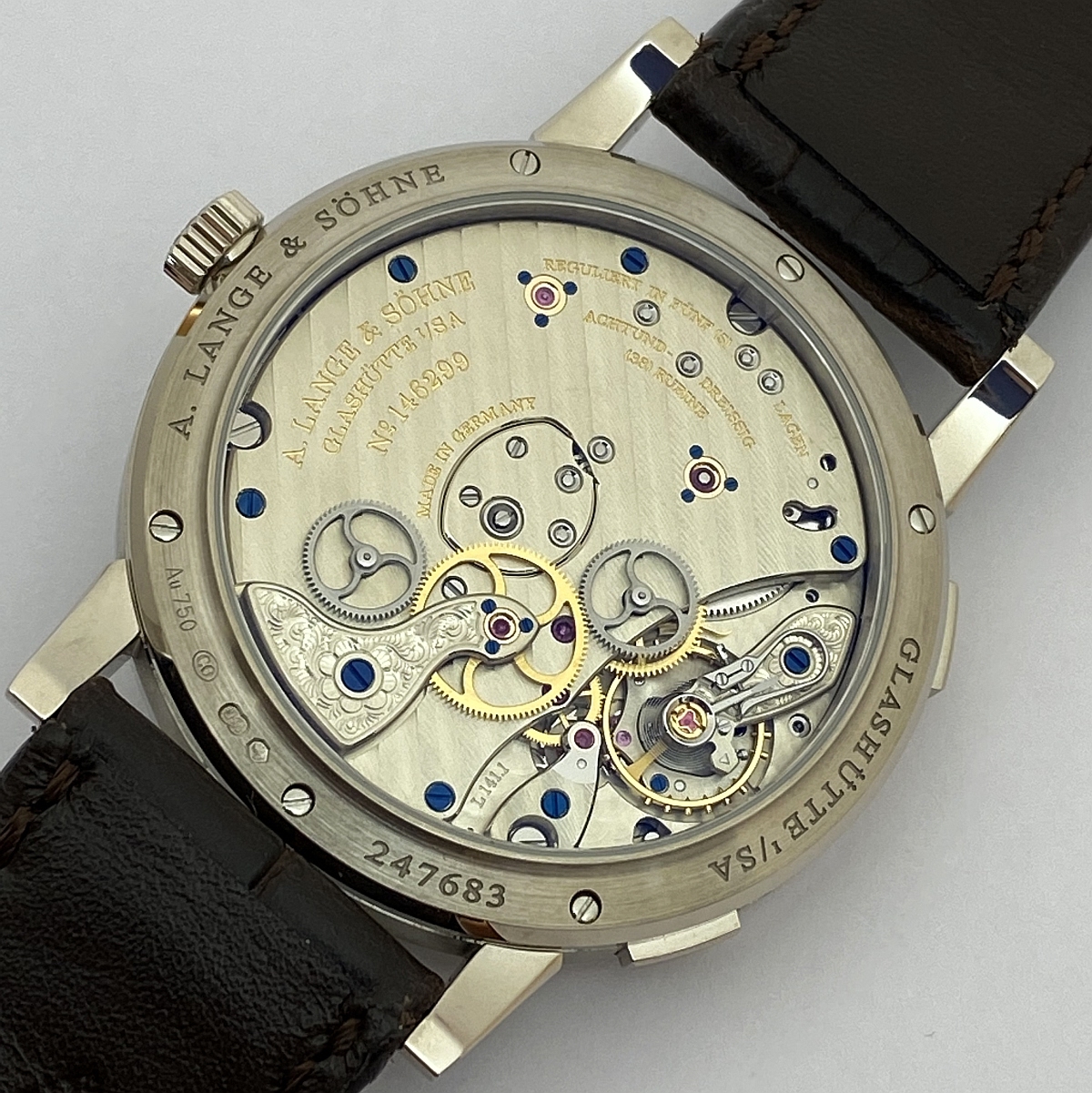 The performances of the new caliber are unchanged, namely a power reserve of 72 hours for a frequency of 3hz. The finish is meticulous and I have always appreciated the visual rendering of the Lange One Timezone caliber because of the additional relief effect it has. Its great strength remains the pleasure we feel in its use: its softness when we wind it and the precision of the two lateral pushers, the first one being used to set the date, the second to change the reference time zone for the subsidiary display.

It is clearly the model in white gold with a black dial that I prefer. I am less attracted by the yellow gold model with a champagne dial because I find these colors a bit old-fashioned. The pink gold model is very beautiful but ultra classic. On the other hand, the white gold model is more contemporary, more dynamic and it also has the virtue of having a smaller perceived size because of its black dial. Let's not forget that the diameter of the case remains 41.9mm (for a thickness of 10.9mm) which makes it a quite big watch. 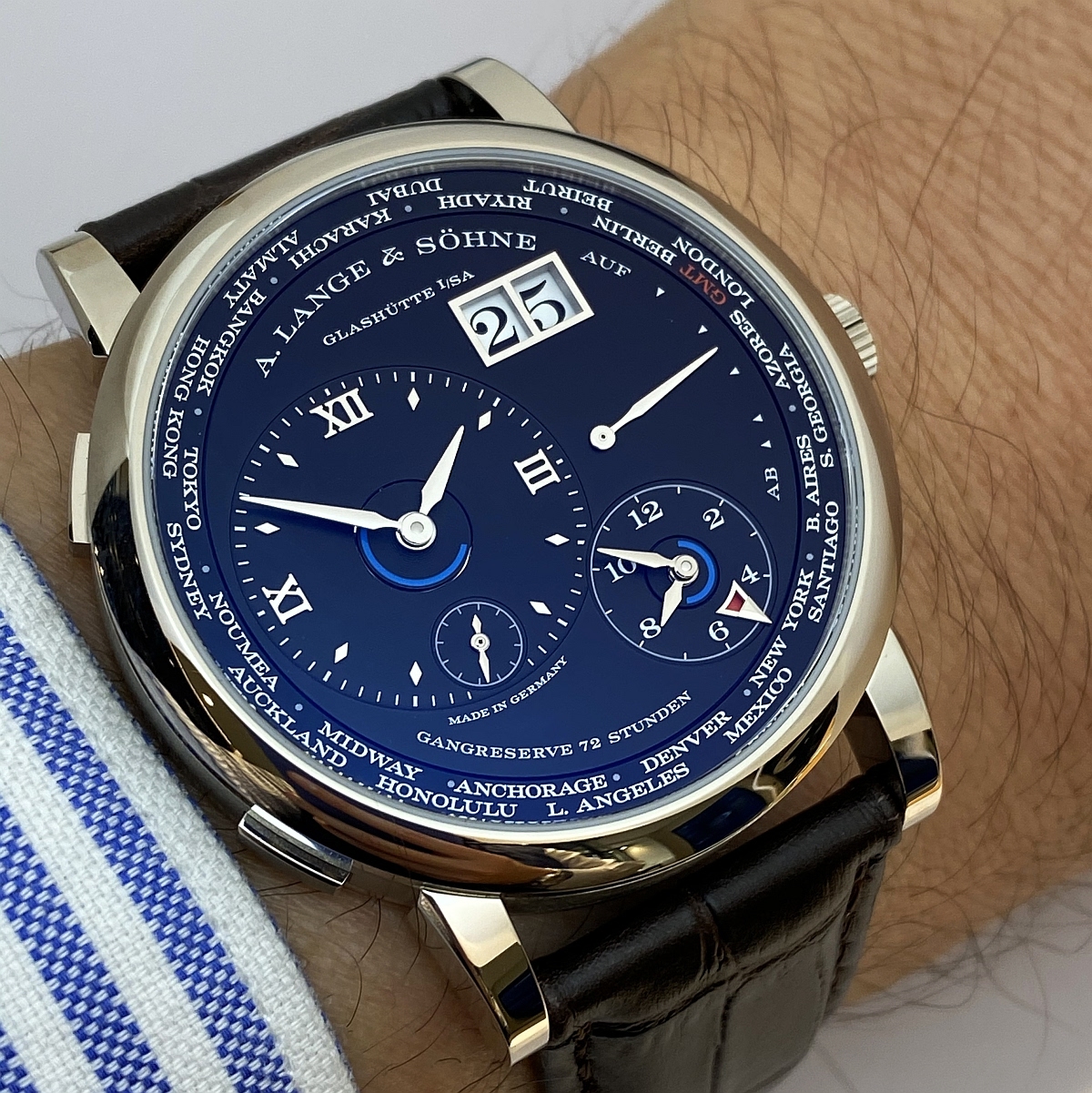 The Lange One Timezone 2020 is undeniably a very beautiful watch, qualitative and irreproachable in use. The control of the settings is almost immediate and the pleasant use of the movement does the rest. Now, this new version remains very close to the old one, if only from an aesthetic point of view. Personally, I find that it brings little if not this daylight saving time system. A real plus would have been the ability for the watch to manage "unusual" time zones such as India or Nepal... but this would have made the watch much more complex. On the other hand, it is appreciable to have a new generation movement. In this context of great similarity, I find that the white gold model is by far the most relevant. I liked it very much and it alone justifies this new generation. As the Lange One Timezone has just been renewed, I have the secret hope that one day Lange & Söhne will tackle the Worldtime complication. I would like to see the interpretation of the Worldtimer watch by the Saxon manufacturer. 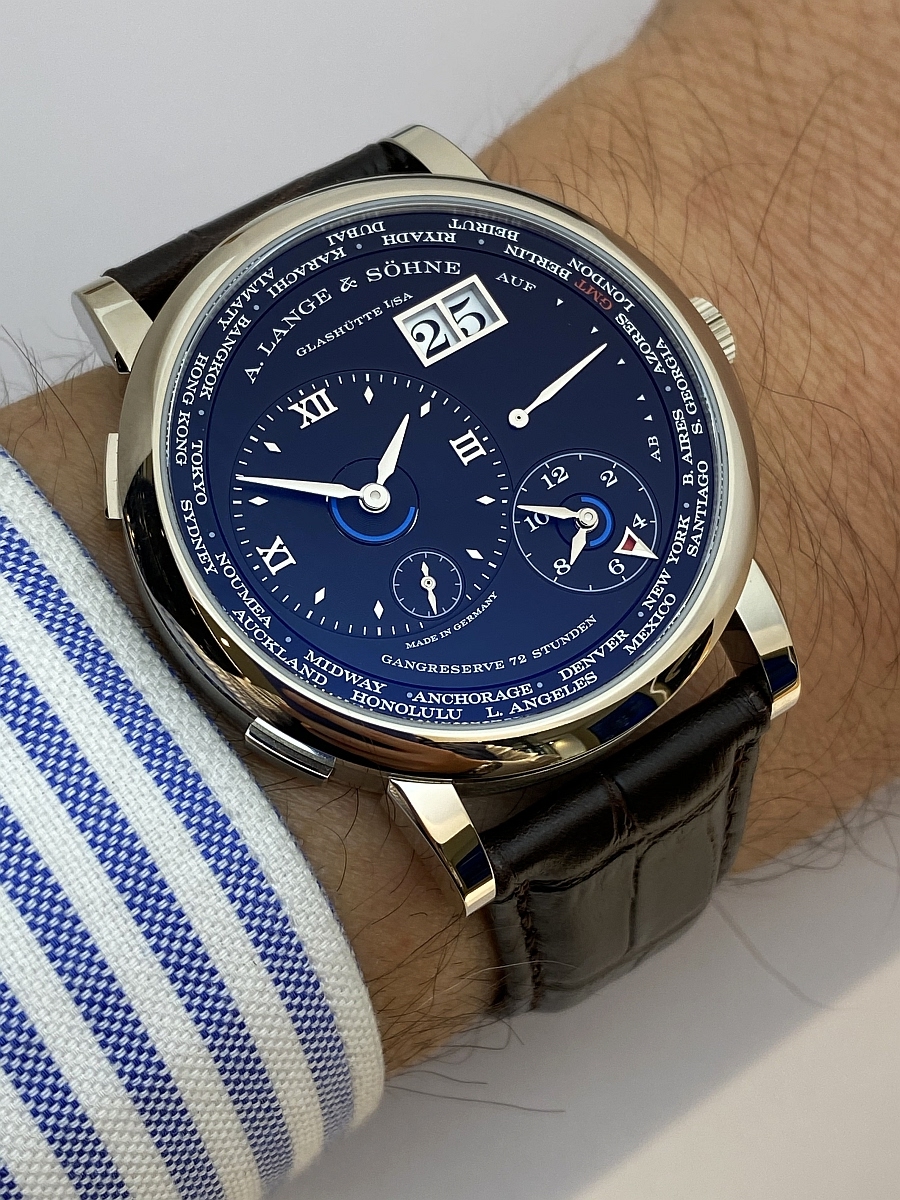 + the quality of the finishes and execution

+ a very nice movement to use on a daily basis

+ the little extra of the daylight saving time system indicator

- ... but it makes little difference compared to the previous Lange One Timezone

- the watch only manages full time zones and not the unusual time zones like India or Nepal.

Hands on review of the Lange & Söhne Lange One Timezone 2020

By: foversta : November 8th, 2020-13:15
The new Lange & Söhne Lange One Timezone was introduced in early summer. It is an evolution of an existing model from 2005 with a new movement and some small display improvements. Let's be clear: from an aesthetic point of view, the Lange One Timezone...
login to reply

Thanks for the review FX. The new Lange TZ is an extraordinary watch and I like it more than the older version 😀 [nt]

By: jlux : November 9th, 2020-01:06
This one,together with the Moonphase, is certainly my favorite within the Lange 1 collection. The design of the watch is however so close to the previous generation that hardly any owner of the older model will also go for the new one.
login to reply

Thank you for posting! I have to say I am a sucker for blue touches on black dials for the night indicator part.