Louis Vuitton has been working since 2002 to develop its watchmaking offer and make it credible in order it becomes consistent with the other components of its catalog. The acquisition of La Fabrique du Temps in 2011 demonstrates this ambition and provides the means to act in the high-end segment. The brand's greatest success is to have built a collection around a recognizable case (Tambour) and a favorite theme (travel). Being able to build an identity in such a short time is not given to everyone and, moreover, manufactures with a much longer period of activity have still not achieved such feat.

The latest novelty from Louis Vuitton plays a very important role in this watchmaking ambition: it demonstrates the brand's ability to innovate, to evolve while respecting the criteria of the Geneva Seal and to assert itself as an important player in the superlative watch segment. The impact that this piece generates must reflect on the entire collection, given its role as a vector of excellence. This watch is the Tambour Curve Tourbillon Volant (Flying Tourbillon) which surprises with its audacity and execution. 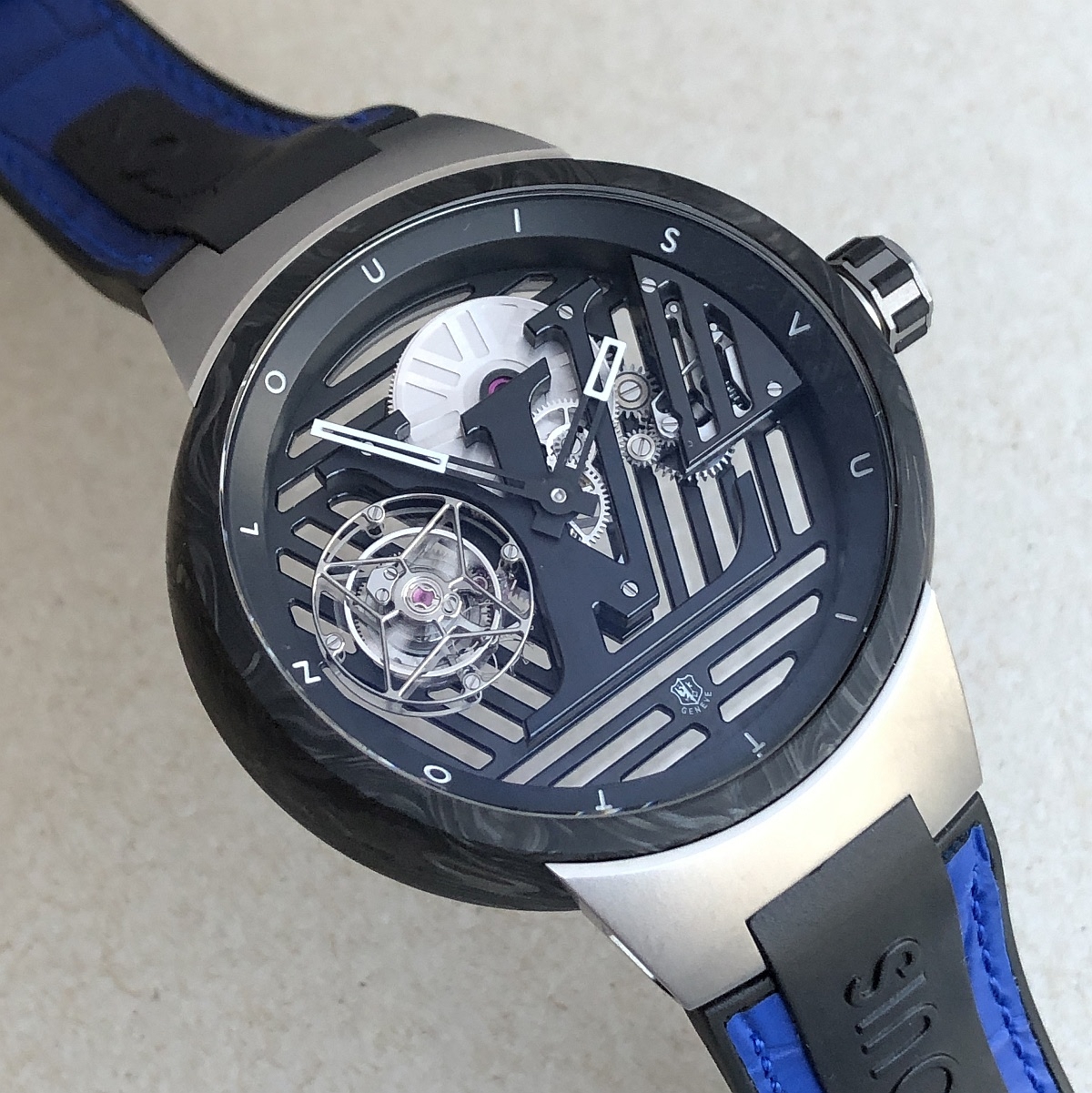 I must admit that I really like this watch. For a very simple reason: it is radical because it gives me the impression that Louis Vuitton and La Fabrique du Temps went to the end of their ideas. It also arouses a kind of paradox in me: I love it for the same reasons why I don't like certain recent trends from Louis Vuitton: the excessive use of the monogram. But in a watchmaking context where consensus is too often present, seeing a watch that I would describe as politically incorrect makes me happy. 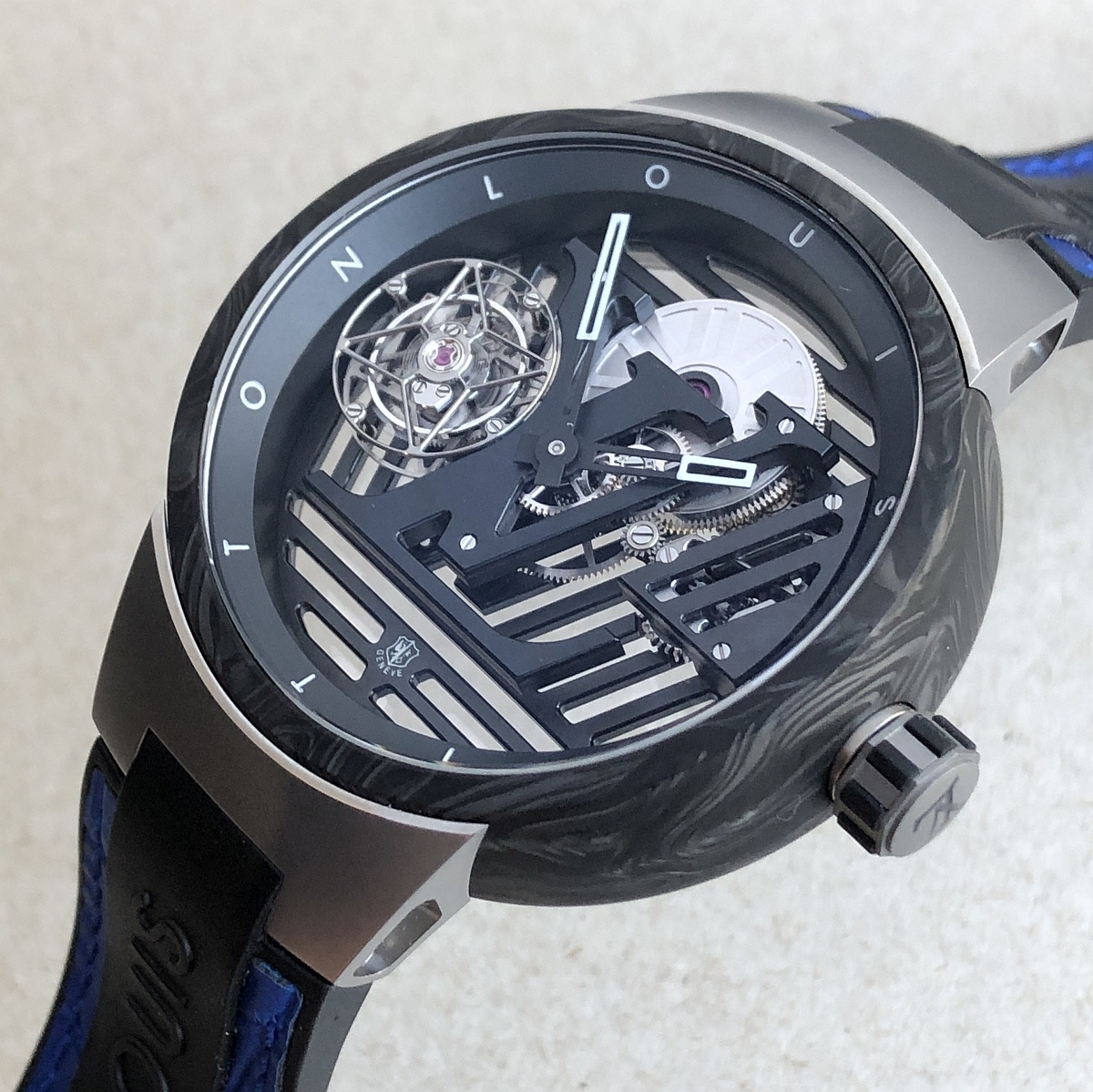 Boldness is not enough to create a convincing watch. It still has to be done well and this is the case here. Two words come to mind: fluidity and lightness.

The feeling of fluidity is obtained thanks to the curves of the case and the presentation of the open dial. One of the most interesting aspects of the watch is the aesthetic work on the shape of the case. It is inspired by the Möbius ribbon which gives it a stretched, curved appearance with a convex camber. When I observe the watch on the side, the case appears higher at the level of the horizontal diameter (which is a key element considering the presence of the tourbillon) and dives on the strap fasteners while it appears as perfectly round seen from above. In addition, the diameter at the bezel (42mm) is significantly smaller than that at the base (46mm) for a height of 12.75mm. Thus, there is no straight line which clearly makes the visual rendering lighter. The dimensions are certainly imposing but at no time did I feel an aesthetic heaviness. On the other hand, the watch remains intended for large wrists. Due to the strap attachment system, the strap extends the case and cannot be pressed effectively onto a small wrist. On the other hand, as soon as the wrist has a sufficient size, the watch is positioned with comfort and firmness. 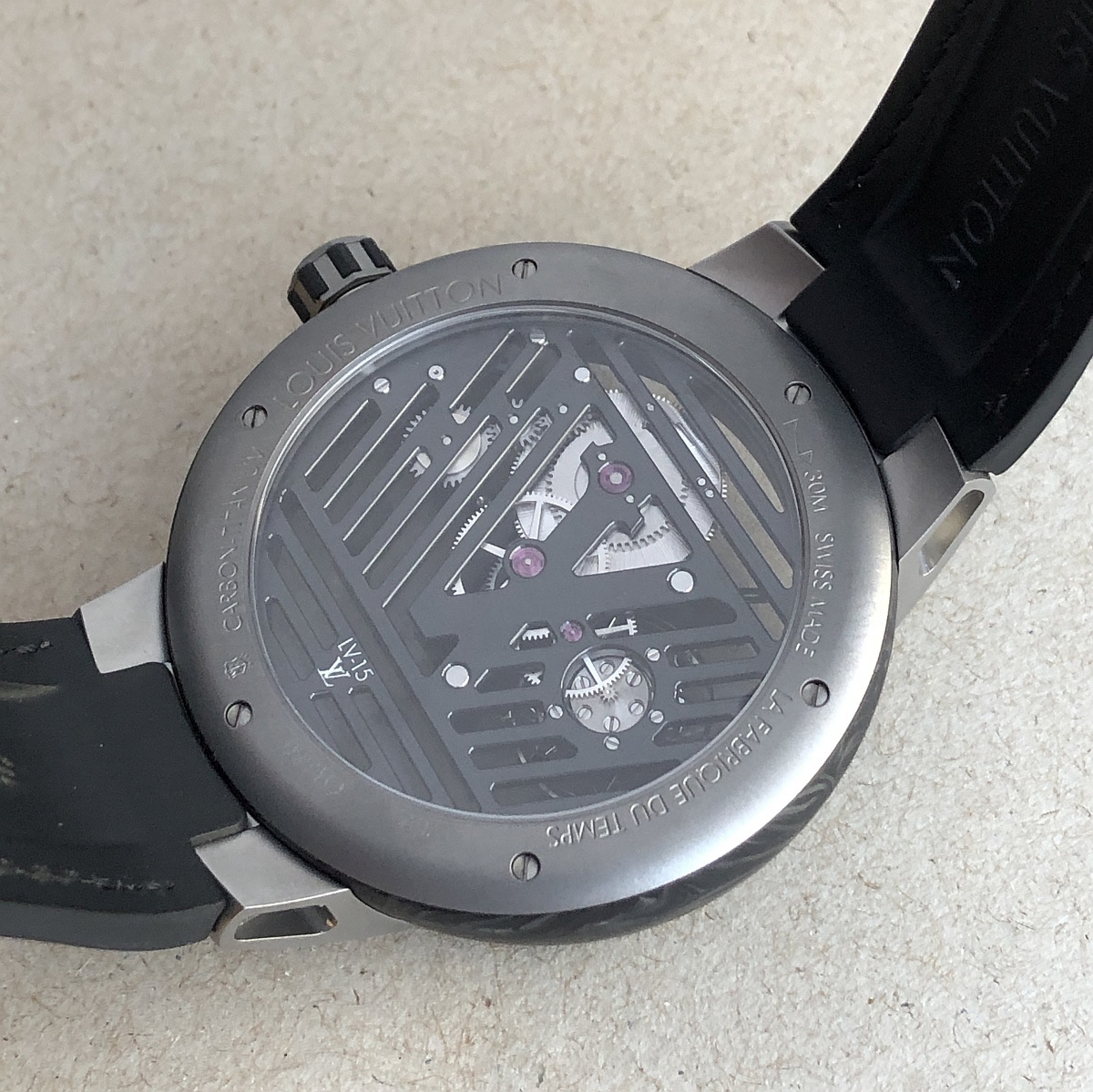 The feeling of fluidity is also the result of the work on the dial. The latter is open and draws straight lines which aim to highlight the curves of the case and to structure the presentation of the moving elements of the movement. The highlight of the show is obviously the flying tourbillon at 9 o'clock, which is distinguished by its aerial and geometric cage in the shape of a flower of the Louis Vuitton monogram. It does a full lap in one minute and I really appreciated its visual, delicate and airy rendering. The cage has a large diameter and the tourbillon "breathes well" taking into account the clear space around. The second element that stands out is the barrel at the top of the dial as well as the wheels. The mechanism is revealed without falling into a baroque "skeleton" approach. The set adopts a contemporary style and the contrast between these mobile elements and the openwork plate treated with NAC black (defining a deep black) is striking. Finally, the last impacting element is the large LV bridge. The latter is ultimately rather discreet in the non-set version, almost merging with the rest of the open plate. On the other hand, the set version literally highlights it and ... I only saw it by manipulating the piece! A final point that I would like to emphasize about the dial: the Geneva sela is discreetly indicated at the base of the dial, which is a good thing. 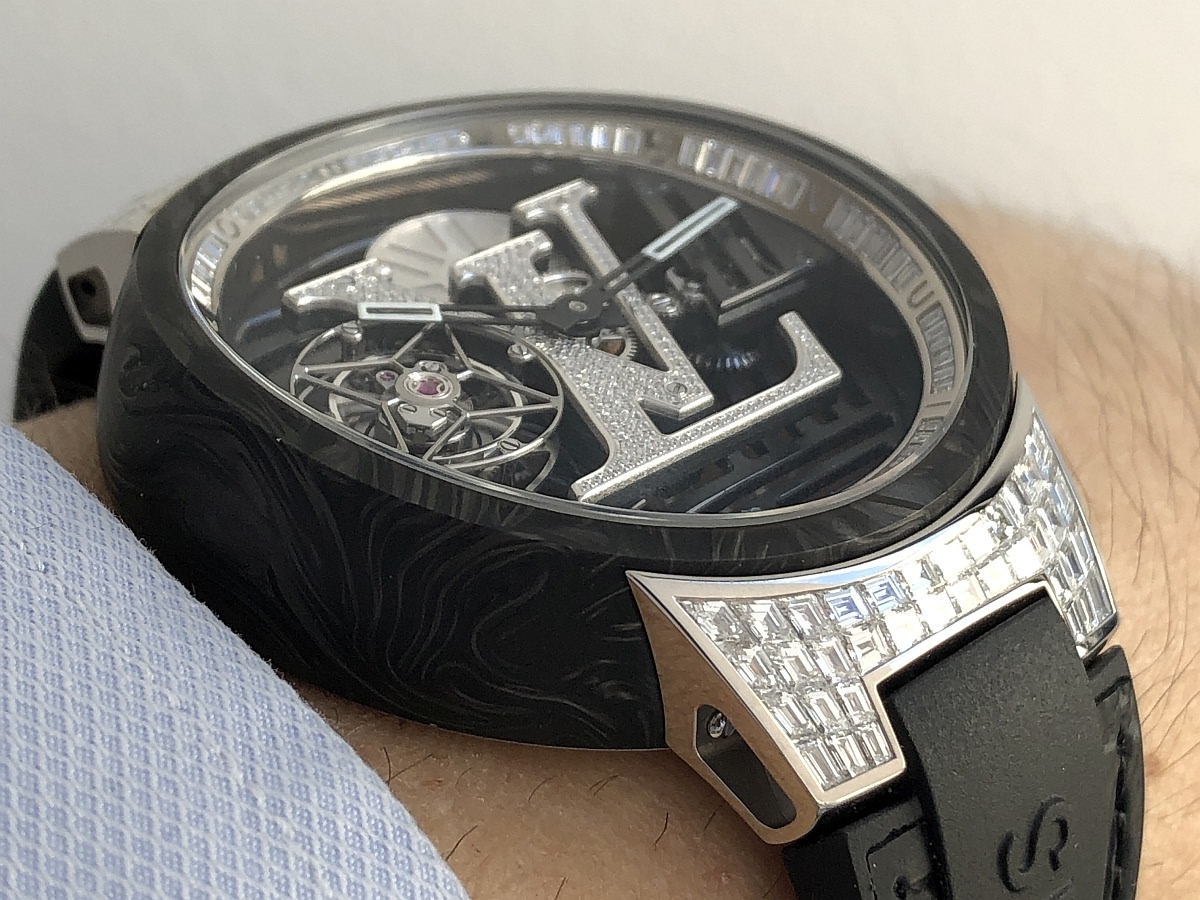 The lightness of the watch is both real and visual. Real because the main component of the case is Carbostratum, a composite material obtained by the random application of hundred layers of carbon of different size. The result is light and resistant. The base of the case, the strap fasteners and the crown are made of titanium. The visual lightness is obtained thanks to the behavior of the flying tourbillon and again the openings of the dial which accentuate the effects of depth. The flange plunges onto the plate and the different levels define a three-dimensional structure.

The presentation of the movement at the back of the watch is similar to that which I find on the dial side. The LV bridge is taken up there, in reverse. Note that the movement is "closed" and that when the watch is worn, the hair on the wrist is not visible which is preferable. 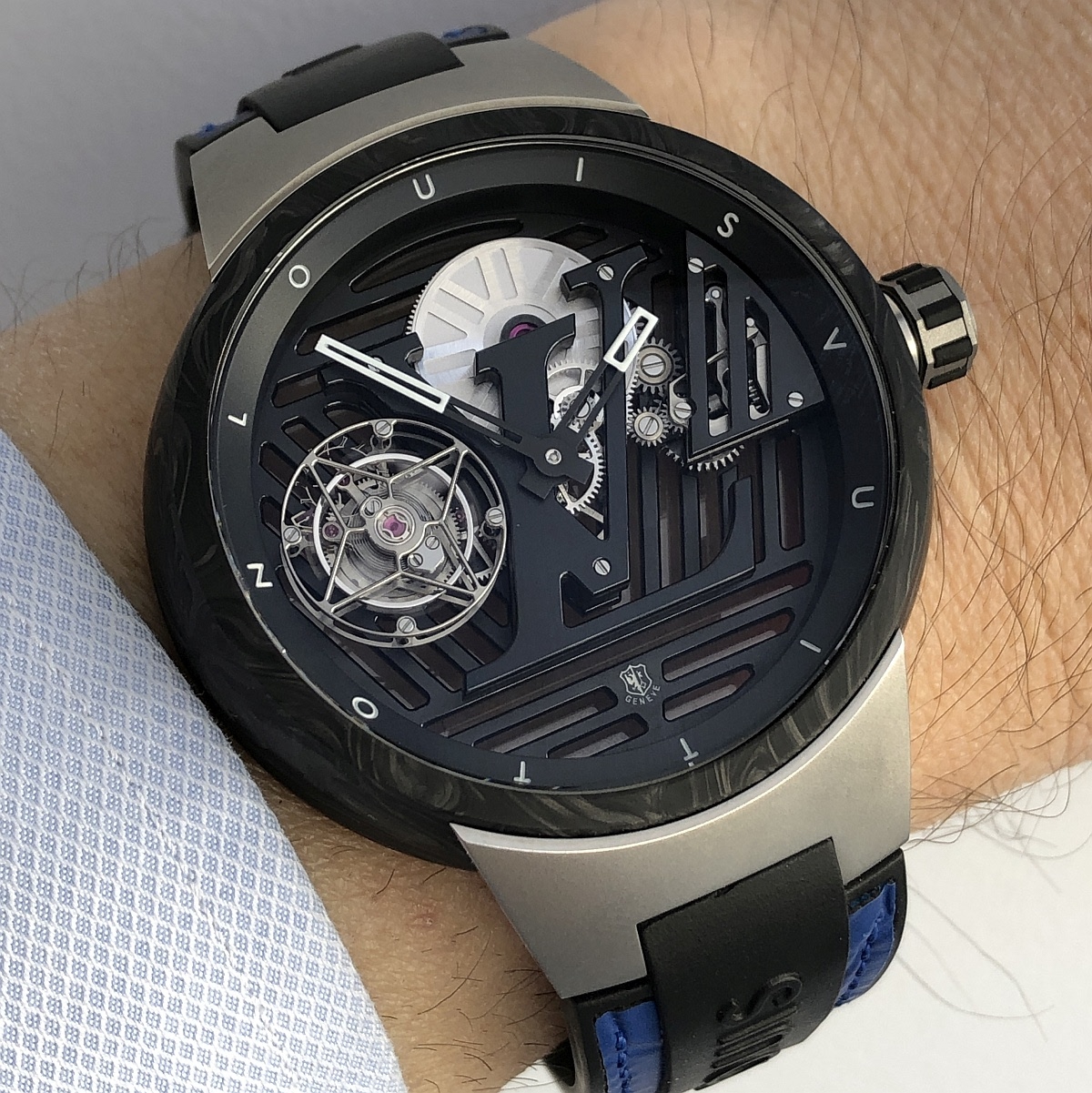 The handwind LV 108 movement  which powers the Tambour Curve Tourbillon Volant offers a power reserve of 80 hours for a 3hz frequency. This power reserve of more than 3 days is appreciable even if the owner of the watch will in any case have the reflex of winding it every day. This piece is after all made to be worn in all circumstances because of its comfort and lightness. The strap is either rubber or bi-material (rubber and alligator). Finally, the water resistance is 30 meters.

So I was convinced by the Tambour Curve Tourbillon Volant. I liked the reinterpretation of the Tambour case in a less rigid approach and the behavior of the flying tourbillon is a feast for the eyes. The watch is comfortable and nice to wear provided the wrist is large enough. Its contemporary atmosphere and the quality of the finishes contribute to its power of seduction. So there remains the subject of the LV bridge: I think Louis Vuitton was right to design it like this, if only for consistency with its stylistic tendencies. The non-set version is in any case rather discreet in this respect, but the set version is on the other hand a hymn to the monogram. It will ultimately be up to wealthy customers to choose between the subtle approach or the more ostentatious one. 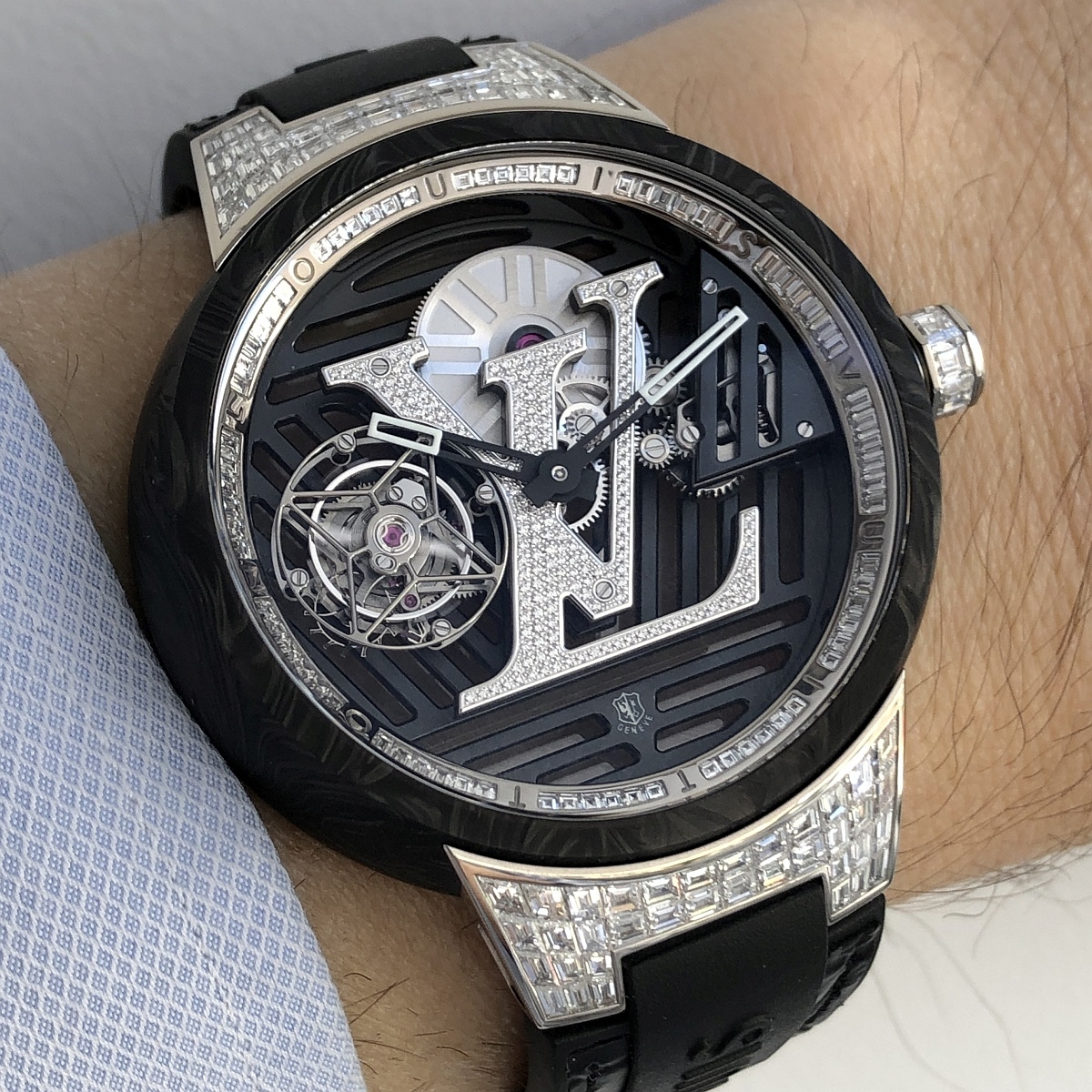 + the rendering of the flying tourbillon

+ the comfort and lightness of the case

+ the way the diamonds are used in the set version

- the imposing size is not intended for all wrists
Fr.Xavier

By: foversta : March 15th, 2020-14:26
Louis Vuitton has been working since 2002 to develop its watchmaking offer and make it credible in order it becomes consistent with the other components of its catalog. The acquisition of La Fabrique du Temps in 2011 demonstrates this ambition and provide...
login to reply

By: Weems@8 : March 15th, 2020-16:06
Directly Hublot came in my mind. Why? I see Hublot big bangs as a busy overwhelming watch designs, screaming something. When i see your post LV watches, they are full of detail, busy, but calm like a water flow. They design modern luxury, and have a desig...
login to reply

Thanks a lot for your comment. And I tend to agree with you. It is also linked to the image the brand wants to give. [nt]