The snake is a figure that has fascinated humankind since time immemorial. Bulgari has made it an authentic brand signature since the 1940s with the Serpenti collection that now welcomes five new timepieces radiating entrancing charisma.

The strength of an icon 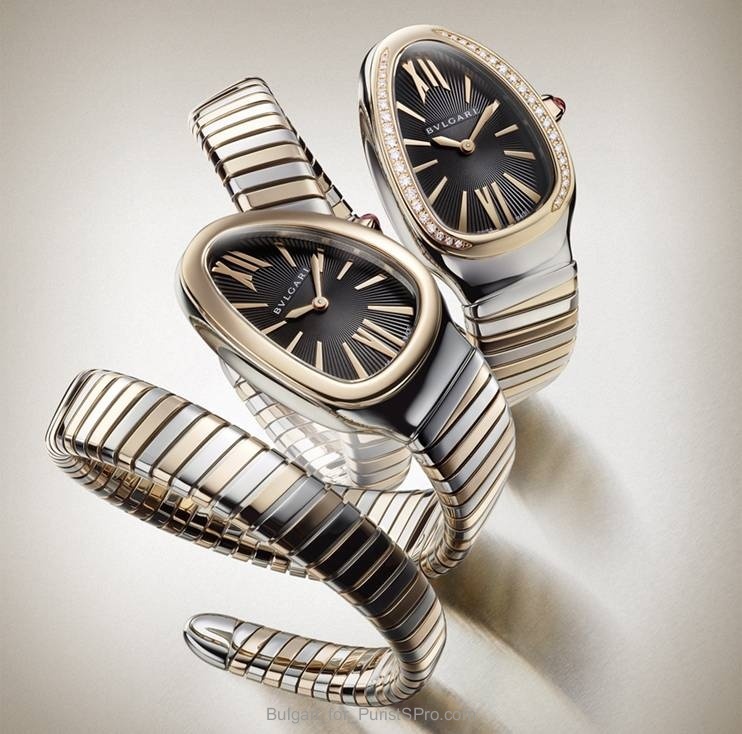 As the ultimate glamour icon, the Serpenti collection carries a scent of eternity, the embodiment of an enduring love story between Bulgari and women. Having earned immortality on the wrist of an Elizabeth Taylor at the height of her fame, Serpenti is also timeless because of the symbolic strength it exudes through the snake, its source of inspiration. Interpreted in the form of watches, necklaces, rings, bracelets and accessories, Serpenti has perpetually thrilled the heart of the most legendary stars of their era, and now continues to coil around the arm or neck of such stunning beauties as Scarlett Johansson, Ziyi Zhang, Dita Von Teese, Kate Winslet, Julianne Moore and Jennifer Garner.

It was in the late 1940s that Bulgari created the first Serpenti watches, stylised interpretation of a snake with a body composed of 'spirotubes' or gold mesh links. Like an extension of this sparkling bracelet undulating around the wrist, the head of the reptile was formed by the watch itself – initially square or rectangular, and subsequently pear- or cushion-shaped, round or octagonal. In the 1960s, the interpretations of the snake became more realistic, while setting the stage for daring gemsetting options combining precious stones, enamels and fine stones in dazzling variations.  To give life to these jewellery creations, the body of the snake was composed of scales hand-crafted from gold leaf, before being hinged or screwed together. A white gold spring coiled inside ensured remarkable suppleness enabling the snake to flow smoothly around wrist. The same period saw the creation of the first Serpenti "secret" watches with covers, of which the most famous remains that of Elizabeth Taylor, immortalised on the wrist of the legendary actress during the 1962 shooting of the film Cleopatra in Rome. This was the moment that sparked the fiery passion between the gorgeous actress with the amethyst-coloured eyes and her onscreen partner, Richard Burton, who famously commented: "The only Italian word Liz knows is Bulgari".

In parallel, Bulgari revived a goldsmith's technique born in the mid-19th century and which had virtually died out by the 1940s: Tubogas, thus named because of its resemblance to old-fashioned gas tubes. The Italian jeweller used it to make highly distinctive watches, necklaces, rings and bracelets, to the point where this technique – that the House is currently the only jeweller to master – has firmly established itself as a signature inseparably bound up with the Serpenti universe. At the heart of this meticulous goldsmith's work lie two fine strips of gold or steel featuring clean-cut and rounded contours that may measure up to five metres long each for each coil around the wrist. After lengthy preparation, these metallic ribbons are shaped and rolled around a copper or wooden spool, in such a way that their raised edges merge seamlessly into each other to form a single continuous length of metal that requires no soldering. When this patient hand-crafted work is complete, the spool is removed or dissolved in acid. The remarkably supple Tubogas creations perfectly mould the curve of the wrist and give rise to stunning executions, such as the Serpenti timepiece presented in 2011 and featuring no less than seven coils, enabling it to flow like a second skin all the way up the forearm. 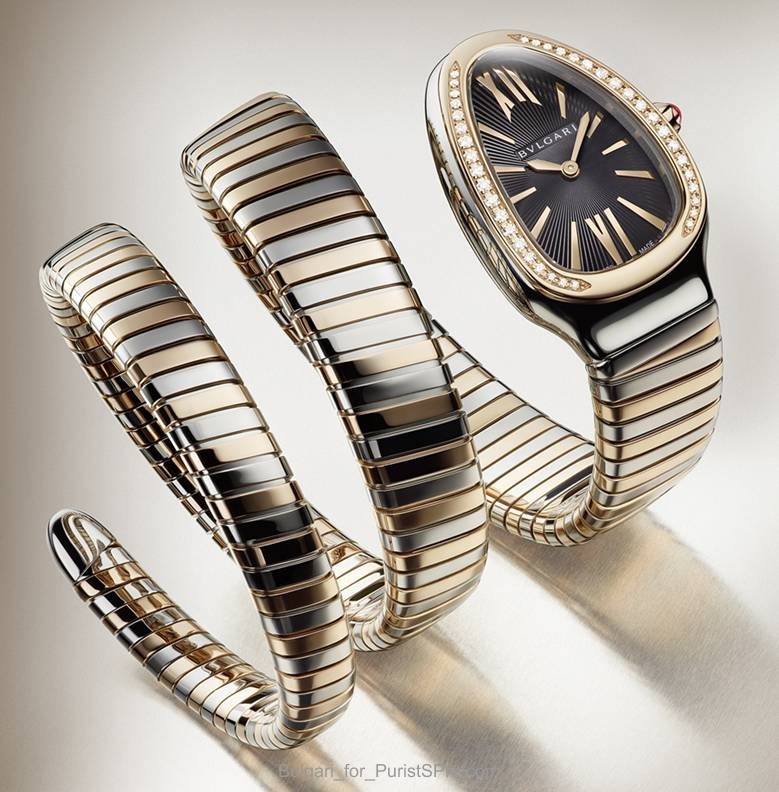 Offering constantly renewed expressions of its inexhaustible creativity and its unique expertise, Bulgari has imagined four new watchmaking variations on the theme of its iconic Serpenti collection. Crafted in 18-carat white gold, the first features a magnificent setting with 458 white diamonds (approx. 12.58 cts) and 35 green agates on the scales, the bezel and the hour-markers of a scintillating reptile that reveals its full magic as it coils twice around the wrist.

Another fine stone with an intense black shade – onyx – suffuses the second new Serpenti variation with its unique aura of mystery. Sublimated by 18-carat pink gold and a river of white diamonds, the onyx undulates over the scales, catching and holding the light through the spectacular contrasts between the cold, dark depths of the black and the warm, radiant  glow of the gold.

Inspired by models from the 1970s, the Serpenti Tubogas 2013 creations feature the 'spirotube' in two-tone single- or double-coil variations.  At the time, Bulgari had successfully managed to combine gold and steel by dint of lengthy technical research designed to identify the type of steel liable to provide both the necessary flexibility and the perfect colour contrast with yellow and pink gold. These issues were compounded by other problems to be resolved, notably linked to the high melting point of steel (1,300 to 1,500° C) and its low malleability compared with 18K gold. In tribute to this masterful work accomplished in the 1970s, the 2013 creations alternate steel and 18K pink gold in contemporary executions staging elegant numerals and gilded hour-markers standing out beautifully against a sunburst guilloché opaline black dial, while the crown is set with a pink cabochon-cut rubellite. The double-coil two-tone model is graced by a bezel set with 38 diamonds (approx. 0.29 cts), whereas the single-coil variation comes in both gemset and non-gemset versions.

Serpenti , the symbolic strength of the snake

Watches, chokers, bracelets, eyewear, handbags: all the Serpenti creations carry within them the symbolic strength of the snake. Inspired by Greek and Roman mythology, they are a subtle nod to the origins of Sotiris Boulgaris who emigrated in 1880 from his native village of Epirus in Greece to Italy, where he changed his name to Sotirio Bulgari to found the eponymous House in 1884.

For Aphrodite, goddess of love and beauty, the snake embodied seduction, while for the philosopher Plato it was synonymous with eternal life when it bit its own tail, symbolising the infinite cycle of life and death. For Demeter, goddess of fertility and the nourishing earth, the snake embodied life through its capacity for rebirth by repeatedly shedding its skin. Legend also has it that Alexander the Great and the Roman emperor Augustus were fathered by divine snakes.

Immorality, wisdom, knowledge or medicine: although each civilisation lends its own meaning to the fascinating reptile, Cleopatra probably remains the historical figure most frequently associated with the snake. The Queen of Egypt presented herself as the reincarnation of Isis, a goddess adored from Alexandria to Rome, and whose attributes included the snake. The sovereign whose destiny was intimately bound up with that of the Roman Empire through Julius Caesar and Mark Anthony chose her own death by the sting of a viper. Her headdress featured a gold diadem with a rearing cobra, while bracelets fashioned like gold snakes coiled around her arm… 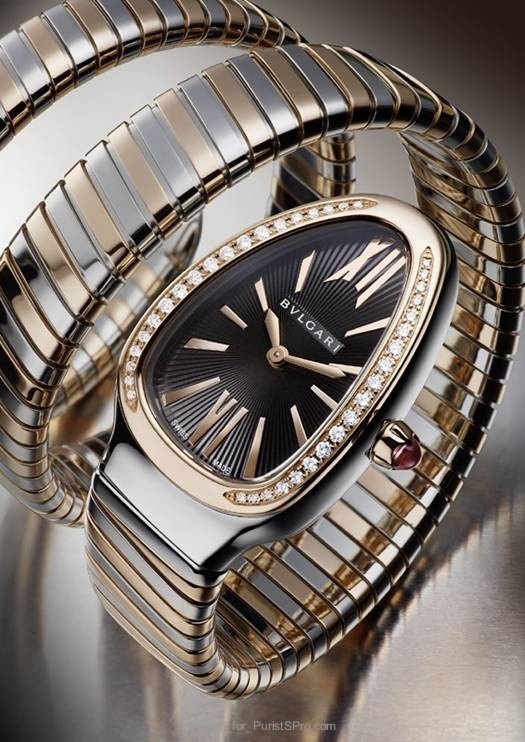 By: AnthonyTsai : August 4th, 2013-20:31
The snake is a figure that has fascinated humankind since time immemorial. Bulgari has made it an authentic brand signature since the 1940s with the Serpenti collection that now welcomes five new timepieces radiating entrancing charisma. Bulgari Serpenti ...