Apr 24, 2013,20:59 PM
Breitling has reaffirmed its pioneering role in the field of technical watches and instruments for professionals by creating the very first wristwatch with a built-in personal locator beacon (PLB). The Emergency II is a high-tech gem equipped with a dual frequency transmitter compliant with the specifications of the Cospas-Sarsat international satellite alert system and serving both to issue alerts and to guide search and rescue missions. 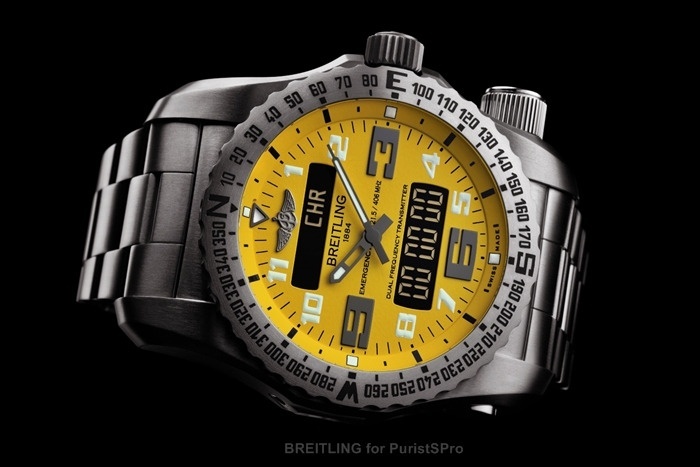 Developed in conjunction with major scientific institutes, the Emergency II is distinguished by numerous microelectronic and microtechnical innovations, including a revolutionary rechargeable battery, a miniaturized dual frequency transmitter and an unprecedented integrated antenna system – three features specifically developed for this model.

As the first ever wristworn dual frequency PLB, it establishes itself as a safety and survival instrument in all distress situations on land, at sea and in the air.


A Breitling stronghold
In 1995, Breitling struck a decisive blow in launching the first wristwatch with a built-in emergency microtransmitter. Operating on the 121.5 MHz international air distress frequency, the Emergency was designed to enable accurate homing in on pilots or passengers following a plane crash. It was designed for constant wear on the wrist and thus as a complement to the standard onboard aircraft equipment.

The Emergency has been tested and worn in daily use by the finest aviation professionals and the world’s greatest aeronautical teams. It has proven its worth in many search and rescue exercises and has become synonymous with safety and reliability for pilots around the globe. Around 40,000 such watches have been sold, and these exceptional instruments for locating and rescuing people in danger have indeed already saved a number of lives.

Building on this successful and extensive experience, Breitling has achieved a new and unprecedented technical feat in presenting the Emergency II.

The Cospas-Sarsat system
The international Cospas-Sarsat system is based on a network of satellites in low altitude earth orbit (LEOSAR) and in geostationary orbit (GEOSAR); it also comprises ground receiving stations as well as control and coordination centers. Its mission is to provide accurate and reliable distress alert and homing data. Supplying this information helps search and rescue (SAR) authorities provide fast and efficient assistance to persons in distress. Since its launch in 1985, the Cospas-Sarsat system has helped save more than 26,000 lives.

The maritime, aviation and land operations comprise three steps: alert, homing and rescue. The alert and homing phases used the same 121.5 MHz analog frequency up until 2009, when Cospas-Sarsat decided that it would phase out satellite processing at 121.5 MHz frequency and that alerts would be triggered only on 406 MHz – a digital frequency able to offer enhanced security, to provide more comprehensive information and to reduce the number of false alarms.

The 121.5 MHz signal is nonetheless still received on land, by ships at sea and by airborne aircraft, and remains the most efficient and reliable system for homing in on victims. Distress radio beacons must thus be of the dual frequency type in order to guarantee accurate homing.

A major innovation
Breitling has once again distinguished itself in the vanguard of electronics by creating the Emergency II, the world’s first wristwatch equipped with a true dual frequency distress beacon. A high-tech miniature marvel, this peerless instrument belonging to the PLB (personal locator beacon) category is distinguished by its transmitter compliant with Cospas-Sarsat specifications and serving both to issue alerts and to guide homing and rescue operations. Representing the culmination of five years of development, the Emergency II called for avant-garde solutions that have contributed to the advancement of microelectronics and microtechnical engineering.

A survival instrument for all distress situations
As the first wrist-type dual frequency PLB (Personal Locator Beacon) and thus worn at all times, the Emergency II is intended for a wide range of users in a variety of fields around the world, including aviation, navigation, climbing, trekking, hiking, exploration, extreme sports, etc. 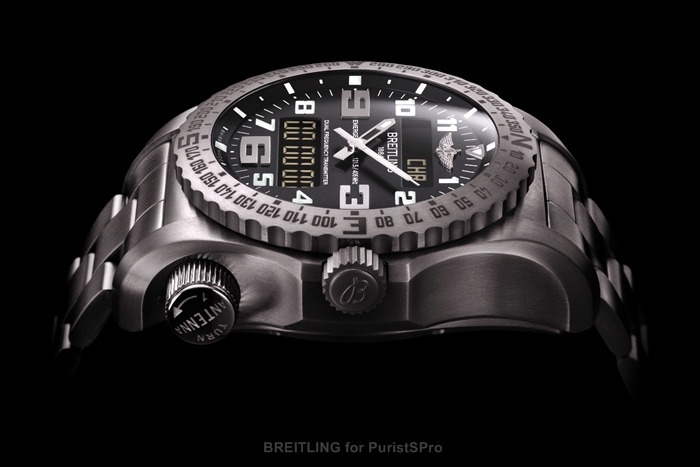 An innovative dual frequency transmitter
The Emergency II is equipped with a microtransmitter alternately operating on two separate frequencies over a 24-hour period. It transmits a first digital signal on the 406 MHz frequency intended for satellites and lasting 0.44 seconds every 50 seconds; as well as a second analog signal on the 121.5 MHz homing and rescue frequency, lasting 0.75 seconds every 2.25 seconds.

A miniaturization record
The development of this dual frequency transmitter specifically designed for the Emergency II was a major technical challenge, essentially due to its dimensions that had to be adapted to the wrist. Conducted in cooperation with an institute specializing in aerospace, defense and industry, it notably involved creating a new circuit exclusively dedicated to this instrument in order to be able to transmit on two frequencies and to do so within an extremely compact volume. The result is a record in terms of both miniaturization and guaranteed reliability, which lays down new benchmarks reaching well beyond the sphere of watchmaking.

An unprecedented antenna system
The Emergency II is notably distinguished by its ingenious and extremely userfriendly integrated antenna system. Its two extendable antenna “sections” housed in the lower part of the watch, are manually deployed on each side of the case. One of the main challenges consisted in finding a miniaturized device serving to transmit alternately on the two frequencies, with the antenna length varying according to the wavelength. Breitling therefore developed an original system in which, according to circumstances, the transmitter uses either part or the entirety of the two antennae – a major first on a locator beacon.

Ultra-simple handling
The beacon of the Emergency II was designed to simplify handling as much as possible. Deploying the antenna automatically activates the transmitter. To do this, the user must first unscrew and pull out the cap on the main antenna on the righthand side of the case. The cap automatically comes free of the antenna when it is deployed to the right length. This operation releases the cap of the second section, which the user can then deploy according to the same principle. A clear reminder of all the stages is provided by a series of inscriptions on the watch. Once the two antennae are deployed, all that remains is to ideally position the watch so as to guarantee the best possible transmission performance.

Controlling energy
The energy issue was a crucial element in developing the Emergency II. The CospasSarsat prescriptions notably demand that beacons should be capable of transmitting for 24 hours, including at -20°C. In addition to these requirements in terms of duration and temperature, the dual frequency transmitter features its own specific characteristics due to its alternate operation at very different power levels (30 mW for 121.5 MHz, and 5 W for 406 MHz, meaning 170 times higher) – a characteristic that entails atypical current draw. Not to mention the need to accommodate all this within a wristwatch.

A revolutionary rechargeable battery
After considerable research, it became apparent that the ideal solution was to opt for a rechargeable battery able to deliver more power than a standard battery. There was however no product of this type that matched the profile of the Emergency II. In collaboration with one of the cutting-edge institutes in this field, Breitling therefore developed a brand-new rechargeable battery specially created for this beacon-watch. A state-of-the-art product for storing energy and which has contributed to the advancement of research in this promising field.

A charger-tester for optimal security
To guarantee the reliability of the Emergency II in case of necessity, Breitling has also developed a charger-tester serving to periodically recharge the battery and then to automatically check the smooth operation of the transmitter.

A chronometer-certified multifunction chronograph
The Emergency II is not only a personal survival instrument. It is also an electronic chronograph featuring all the functions useful to professionals and adventurers: 12/24-hour analog and digital display, 1/100th second chronograph, alarm, timer, second timezone, multilingual calendar and battery end-of-life indication. 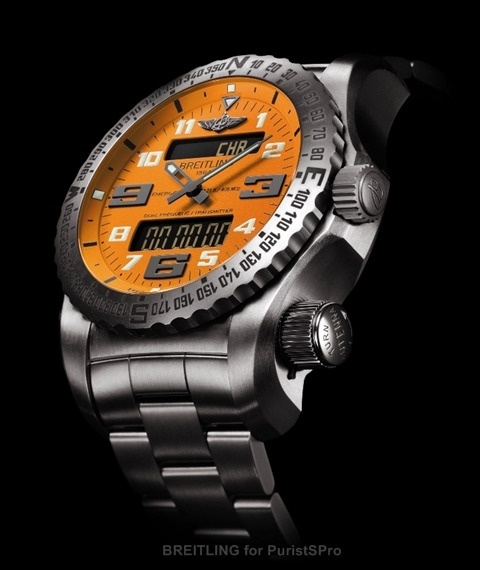 It is equipped with a thermocompensated SuperQuartz™ movement ten times more accurate than standard quartz and chronometer-certified by the COSC (Swiss Official Chronometer Testing Institute) – the highest industry benchmark in terms of precision and reliability. The “watch” and “transmitter” parts have been designed as two distinct elements, totally independent in terms of both operation and energy source and thus ensuring enhanced security.

A sturdy and technical design
The Emergency II has a highly complex case made from titanium, the favorite aeronautical metal that is at once sturdy, light, anti-magnetic, corrosion-resistant and nonallergenic. It comes with a choice of three dials – black, yellow or orange – and fitted with a titanium bracelet or rubber strap. The satin-brushed bezel is engraved with a compass scale accentuating its powerful, technical appeal. The sapphire crystal glareproofed on both sides, along with the luminescent hands and numerals, guarantee optimal readability in any conditions. A peerless functionality for the world’s first wristwatch with a built-in dual frequency personal locator beacon.

TECHNICAL SPECIFICATIONS OF THE BEACON 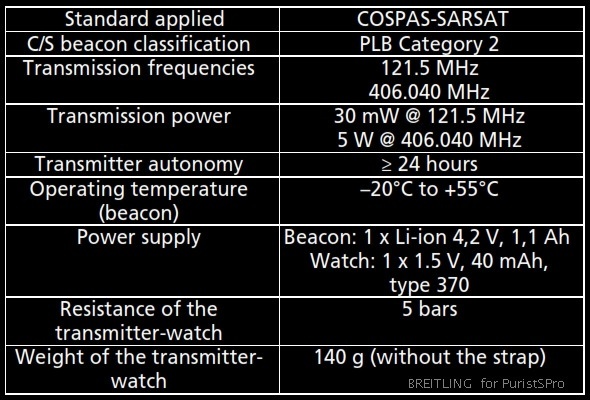 TECHNICAL SPECIFICATIONS OF THE WATCH

By: Kong : April 24th, 2013-20:59
Breitling has reaffirmed its pioneering role in the field of technical watches and instruments for professionals by creating the very first wristwatch with a built-in personal locator beacon (PLB). The Emergency II is a high-tech gem equipped with a dual ...