Mar 13, 2013,06:42 AM
Singapore, 13 March 2013 – Ulysse Nardin and The Hour Glass are proud to present the Freak Limited Edition, a unique anniversary timepiece specially conceptualized by and created for The Hour Glass, to commemorate one of horology?s most significant icons - the Freak.  More than a year in the making, the eagerly awaited timepiece marks a 10-year milestone in the Freak?s progressive tour de force through a decade. 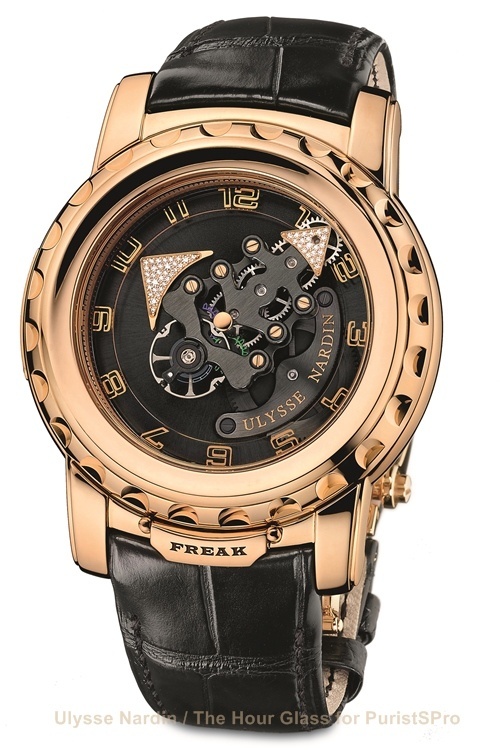 “The Freak emerged at the turn of the millennium as one of the forerunners of wildly creative, avant-garde mechanical watchmaking.  Though daringly different and ahead of its time in the realm of design concept and material innovation, it roots itself in the patrimony of artisanal horology.  The Freak has revolutionized what we term today as kinetic horological art.  We are honoured to be a part of this 10-year milestone of Ulysse Nardin?s most inventive success with The Freak L.E. (Limited Edition),” said Mr Michael Tay, Executive Director of The Hour Glass Limited.

The Freak L.E. is also symbolic of the Swiss marquee?s strong symbiotic relationship with The Hour Glass, its exclusive retailer for over 20 years.  As a meaningful tribute to this valuable bond over the decades, the timepiece is produced in a very limited quantity of 20 pieces worldwide, available only to The Hour Glass.

“The Freak L.E. bears extra significance as it marks our longstanding collaboration with The Hour Glass. When The Hour Glass initiated the idea of a commemorative Freak timepiece, we knew that the iconic Freak will also be the perfect centerpiece to affirm our cherished partnership for over 20 years, echoing the strong bond shared. This is the first time Ulysse Nardin has created a Limited Edition of  the Freak solely for a partner,” said Mr Patrik Hoffmann, CEO of Ulysse Nardin.

A Legend is Born – “Poetry in mechanical watch making”
In 2001, Ulysse Nardin unveiled a watch codenamed “Freak”.  Completely inventive and unorthodox, the Freak delivered a jolt to the traditional watchmaking industry, creating a worldwide sensation.  The Freak - a brainchild of the late CEO Rolf Schnyder and the ingenious Dr Ludwig Oechslin, a long-time friend of Ulysse Nardin – represented the pinnacle of both technological and artistic watchmaking.  Its concept was a technical tour de force, requiring the combined efforts of three of watchmaking?s most renowned engineers.

Having just emerged from the late „90s in an era of largely traditional 3 -hands watches, the Freak was by norms, truly “a freak”.  It has essentially no true case.  The crystal and bezel are part of the movement; the Freak has no crown, no hands and time-telling is ingeniously read from the movement itself, rotating around the dial.

It contains fewer parts than the simplest watch and remains a Carrousel Tourbillon by necessity.  No watch had ever been designed this way.

Powered by the in-house developed Dual Ulysse Escapement, the Freak pioneered the use of silicium in the context of necessity – not for decoration or to be different.  Ulysse Nardin?s Freak was one of the earliest leaders in the realm of silicium technology – truly a trend-setter in those days.

Recipient of the Innovation Prize award in 2001, the Freak was hailed with accolades such as “kinetic art” and “wrist poetry” – original terms for watches. Such was the stunning effect of the Freak that it inspired and led others to boldly venture in the new realm of timepieces as mechanical art.


The 7-Day Carrousel Tourbillon, an invention of Dr Ludwig Oechslin
The Freak indicates the time by the rotation of the movement. The arrow decorating the main spring barrel indicates the hour while the upper bridge, fitted with the balance wheel assembly and its revolutionary Dual Ulysse Escapement, revolves once every hour indicating the minutes. During its 60  minute rotation, the upper bridge lays bare the mechanics of time. The center axis pivots in the sapphire crystal of the watch case. This is a spectacular sight, accentuated by the finishing skills of Ulysse Nardin?s watchmakers in Le Locle.


The 28’800 V/h Oscillator
The 4 Hz frequency and the 7 mg*cm2  moment of inertia provide the Freak an accuracy comparable to the mechanical Chronometers.

The balance wheel represents a new Ulysse Nardin design and concept.  It bears 4 inertia adjusting screws which are hidden within the rim, thus avoiding the creation of air turbulence. The spiral length is not adjustable, the frequency is found by adjusting the inertia of the balance.


The Dual Ulysse Escapement
The Dual Direct Escapement which was developed for the first generation Freak opened a new field of discovery and potential improvement in the vast domain of the escapement. The Dual Ulysse represents the next step in that development, showing several novelties and incorporating the advantages brought by its predecessor.

The Dual Ulysse Escapement has 2 wheels, allowing natural force transmission: the force and the move have the same direction, alternatively clockwise with the first wheel and counter-clockwise with the second.

The wheels have now 18 active teeth, guaranteeing a good energy transmission to the oscillator. No lubrication is required - the transmission is made through a “gear like” mechanism.

The impulse is given to an alternator which passes it further to the balance shaft. This alternator is a gear which turns alternatively in one direction and then the opposite direction.

The innovative principle of the Dual Ulysse Escapement permits a dramatic reduction of the lift angle from the usual 50-52 degrees (Swiss Anchor and Dual Direct) down to approximately 30 degrees. The lift angle is the arc run by the balance between its first contact with the escapement and its last contact.  The shorter the arc is, the lower is the disturbance of the natural oscillation of the balance.


Main Spring and Winding Mechanism
The main spring is located underneath the movement and spans across the entire case diameter. A ball-bearing consisting of 196 balls maintains the barrel in a very stable position, minimizing friction. The main spring?s extra large size provides the Freak with a power reserve of one week.


The Hour Glass Limited Edition
Evolution is an integral part of any Ulysse Nardin product and the Freak L.E. returns with some major improvements, such as the patented Dual Ulysse Escapement in silicium that needs no lubrication.

The Freak L.E. is a 7-day Carrousel Tourbillon with the hour and minute indexes set with 53 diamonds. A magnificent dark sculpture, the black bottom of the case and the black PVD of the minutes movement plate and its bridges offer a magnificent contrast to the six upper screws in gold and to the golden numerals and index.


Proudly Freak
Even today, more than a decade after, the Freak remains an outstanding piece, both in terms of technology and aesthetics – instantly distinct and recognizable. It is for this reason that the Limited Edition has its namesake “Freak”, proudly proclaimed on the unique lock-down plate on the case bezel. 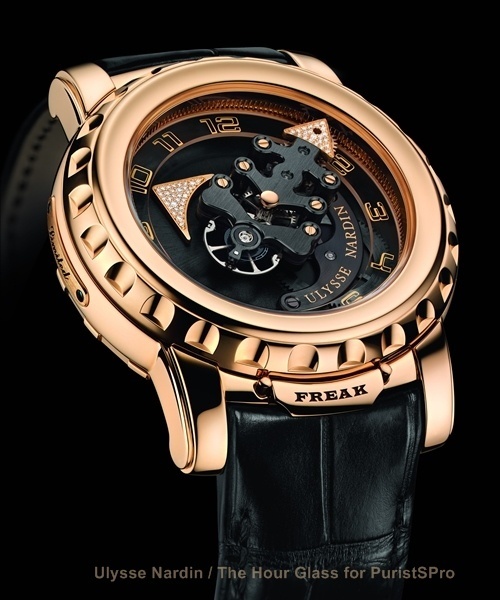 A horology titan that revolutionized haute horology, the Freak L.E. pays homage to the trailblazing decade of inventive innovation and advanced technologies envisioned in the Freak family. Critically acclaimed as a mechanical work of art, the Freak continues to inspire and lead the way for complicated timepieces; an original icon that ranks amongst the top echelons of masterpieces.

The Ulysse Nardin Freak L.E. is available in a worldwide limited edition of 20 pieces.

Retailing at The Hour Glass boutiques from March 2013.

By: Kong : March 13th, 2013-06:42
Singapore, 13 March 2013 – Ulysse Nardin and The Hour Glass are proud to present the Freak Limited Edition, a unique anniversary timepiece specially conceptualized by and created for The Hour Glass, to commemorate one of horology‟s most significant icons ...