EBERHARD & CO. AND THE GRAN PREMIO NUVOLARI, STILL TOGETHER AFTER 21 YEARS TO CHALLENGE TIME

Once again Eberhard & Co. is taking part as Official Partner and Chronometer to record the times of the cars competing in one of the most important historical regularity races worldwide.

This year edition is particularly felt: the parade of vintage cars, which will cross the beautiful lands recently affected by the earthquake and now engaged in the difficult process of reconstruction, will be symbolically ambassador of a trust message for the people of those areas.

This year, among the over 300 vintage cars ready to compete along a thrilling route crossing the most beautiful historical towns in Northern and Central Italy, there are seventy or so fabulous cars dating back to the Second World War, a record-breaking presence that only the "Mille Miglia" can boast.

No fewer than 16 Eberhard pairs will be lined up at the start: 4 foreign pairs from Team Eberhard and 12 from Classic Team Eberhard, the Mantuan yard set up by Corrado Corneliani, Ottaviano Checchi and Marco Gandino:  3 cars dating back to just before the Second World War, 8 cars of '50s and a model of '60s.

This is the twenty-first anniversary of the partnership between Eberhard & Co ., which, in 2012, is celebrating 125 years since its establishment, and the prestigious vintage motorcar race. And it is this strong affinity that has inspired the "Tazio Nuvolari" chronograph collection, a tribute to the legend of the driver who has gone down in history as the "Flying Mantuan": from the first chronograph to have marked the start of this link to the "Vanderbilt Cup" , through to the "Grand Prix" limited edition, in which tradition and innovation come together perfectly.

To celebrate the 120th anniversary of the birth of the great "Nivola", Eberhard & Co. presents "Tazio Nuvolari Data".

An automatic mechanical chronograph with a sporty style, the distinctive feature of which lies in the date .  It is the first model in the Tazio Nuvolari collection, since 1992 – when the first model was presented – to bear the date.

Sunday 23 September, against the splendid backdrop of Mantua's Bibiena Theatre, Eberhard & Co. will be presenting the "Tazio Nuvolari" chronograph to the absolute winners of the event, also awarding two exclusive and highly prestigious silver cups to the highest ranking Italian and foreign yards.

This is Eberhard & Co.'s way of consolidating the string link with the fascinating world of speed and of vintage-style challenges, 21 years after its debut. 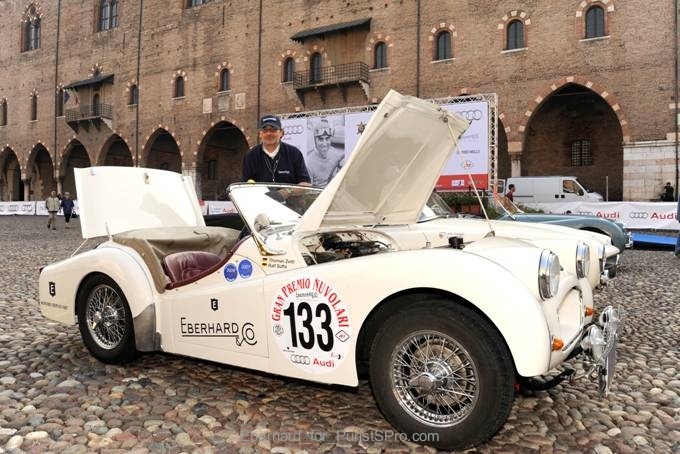