If you visit Jean Rousseau, ask to look at the actual skins (not the swatches of skins), and do not look at them in the showroom lighting. Bring them to the window and look at them there, in natural lighting. There's a huge difference. Also, I prefer to get them with a single fixed keeper (no need for a floating keeper) and not more than 3 holes (usually 2 holes).

Here is a Jean Rousseau strap: 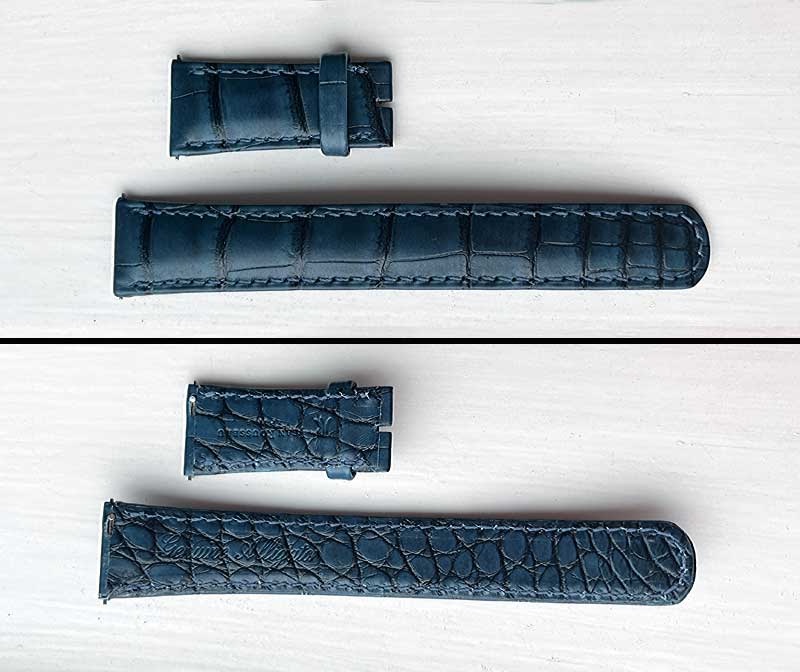 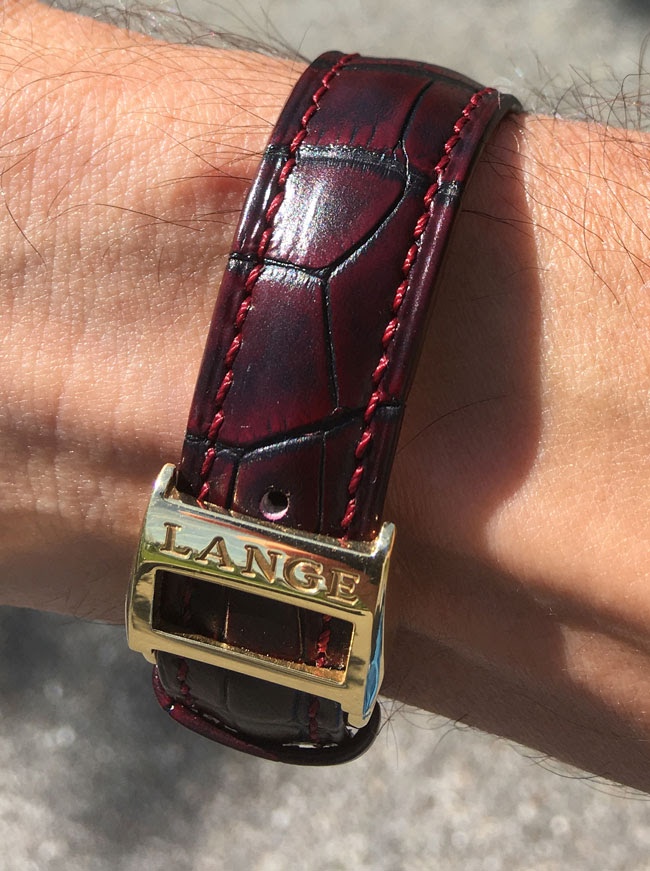 I also used to order Hadley Roma custom straps ("Alligator 2005" style). Lots of online dealers in the US used to sell them, since they're made here (Florida). They were relatively inexpensive and great quality, but I haven't done that in years. Here's an old pic of some of those: 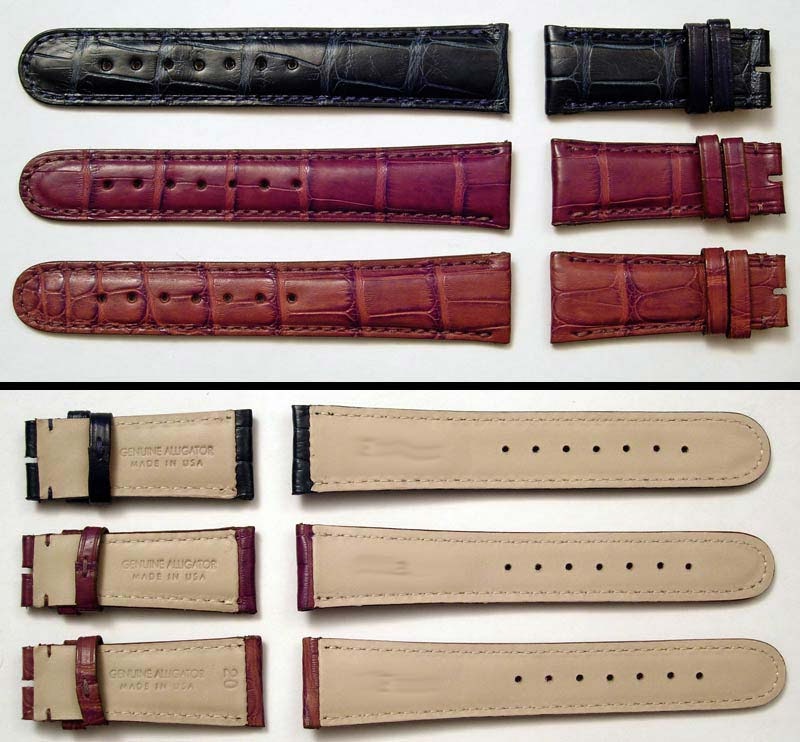 Anyone familiar with Camille Fournet for an OEM strap for Lange?

By: darrony : November 24th, 2022-04:26
I am told CF makes the straps for Lange, I am trying to get a navy/royal blue gator commissioned to 125yr anniversary specs. The boutique wouldn’t sell to me. I tried one email contacting CF directly but was unsuccessful, will try again but checking here ...
login to reply

I have had good luck with Jean Rousseau for Lange straps. You might try them. 54th Street, NYC.

By: JV_Zag : November 24th, 2022-12:53
I just had them make a custom strap for my Lange 1 - looked identical to an OEM (just different color) and great customer service
login to reply

By: CR : November 24th, 2022-16:58
If you visit Jean Rousseau, ask to look at the actual skins (not the swatches of skins), and do not look at them in the showroom lighting. Bring them to the window and look at them there, in natural lighting. There's a huge difference. Also, I prefer to g...
login to reply

Not heard CF do Lange straps.

By: russell996 : November 24th, 2022-09:45
CF do some Patek straps for sure. The Lange boutiques seem to have a tie in with Jean Rousseau as do VC boutiques.
login to reply

By: walidk : November 24th, 2022-13:45
The NY Lange boutique used to offer customization for straps through JR if they didn’t have a color a customer wanted. I haven’t been there in a while so maybe things have changed as the brand has become ‘popular’. JR can also give you the Lange strap box...
login to reply

Very glad you posted this, Walid!

By: CR : November 24th, 2022-16:34
I really liked the Lange straps that were made by Kaufmann. I think Perrin also made Lange straps years ago, and those were nice too.
login to reply

I have not, hopefully you get the info you seek.

Thanks Gents! I actually thought it was JR as well

It’s no problem at CF

By: immerschnell : November 25th, 2022-21:29
I did earlier this past summer with them. It was super easy and they were very helpful. It’s not instantaneous but they will get back to you. I couldn’t be happier with their product. Let me know if you have questions. Literally just did all custom design...
login to reply

Thanks immerschnell… to be clear

By: immerschnell : November 26th, 2022-06:48
Hi again. Yes I had it designed to be the proper length for me. The tip or end can be made to look curved like the Lange end or other ways as you can see on the configuration. Yes all with CF. I have it on my 1815 u/d and swapped another oem Lange strap i...
login to reply

By: immerschnell : November 26th, 2022-07:34
Most definitely!! I enjoyed the experience and was great to make a bespoke one as desired and not just off the shelf.
login to reply

Update Here… I am conversing with CF

By: darrony : December 3rd, 2022-10:20
While they admit Lange has access to their leathers they neither confirm or deny they are OEM manufacturers for them and they would not state which leather if any is the 25th anniversary blue. In fact they suggest two other colors and said those are close...
login to reply

Yes! And they have said they will help

By: darrony : December 3rd, 2022-19:42
Me with all the the appropriate strap characteristics thickness at lug vs tip, square padding, etc… but they won’t out right tell me the color 🤣
login to reply

OMG… my update post is actually for JR… not CF 🤣

Are you saying you meant to say "JR" rather than "CF"?

By: CR : December 3rd, 2022-21:38
If so, these may be helpful, below. This is an old JR order form. Where it says "~1/4 of length should be round scales" refers to the smaller scales towards the tip of the long end of the strap. I like that gradation to smaller scales at the end. Also, as...
login to reply

Thanks Craig! While I initially contacted CF

By: darrony : December 4th, 2022-01:15
I am currently only working with JR at the moment. So in my last update it was JR (not CF) that neither confirmed nor denied that they make OEM straps for Lange, but would help me with every spec of Lange except the color confirmation for the 25th
login to reply

You might just have to go there and pick a nice blue! :)

By: CR : December 4th, 2022-04:33
That's what I did, specifically for the perfect shade of blue. It was fun! They have so many different blue skins! And personally, I prefer the slightly rounded padding that Lange used in its older OEM straps versus the more rectangular-shaped padding (wi...
login to reply

Since I’m on west coast;