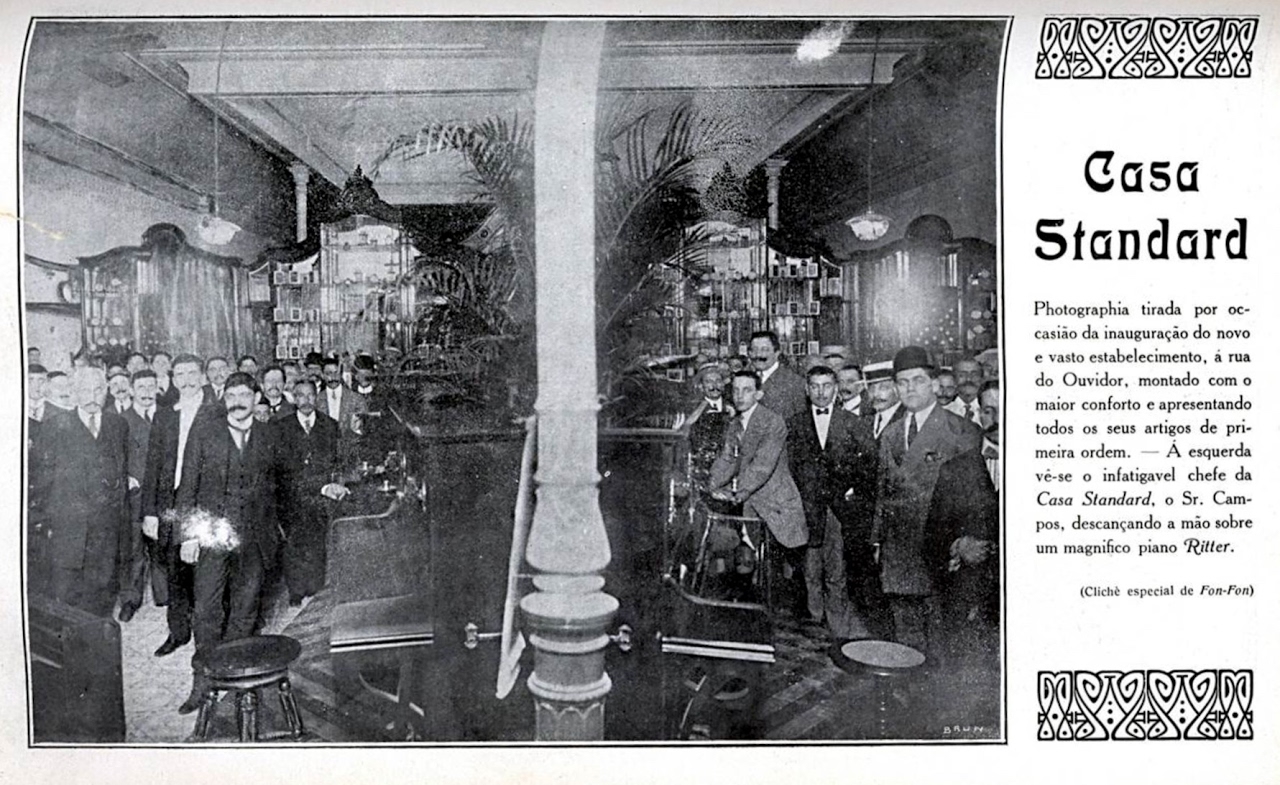 If you believe auction house notes, there were only twenty-five Chronometro Gondolo Chronographo watches produced for Gondolo & Labouriau; most being one-minute chronographs and six with 30-minute registers.  They were advertised as “useful for those who need to make observations based on calculations of fractions of seconds, as happens to Doctors and Engineers, Navy and Merchant Marine Officers, Sportsmen, etc.”  The chronographs were not offered through Relojoaria Gondolo’s buyer’s clubs. 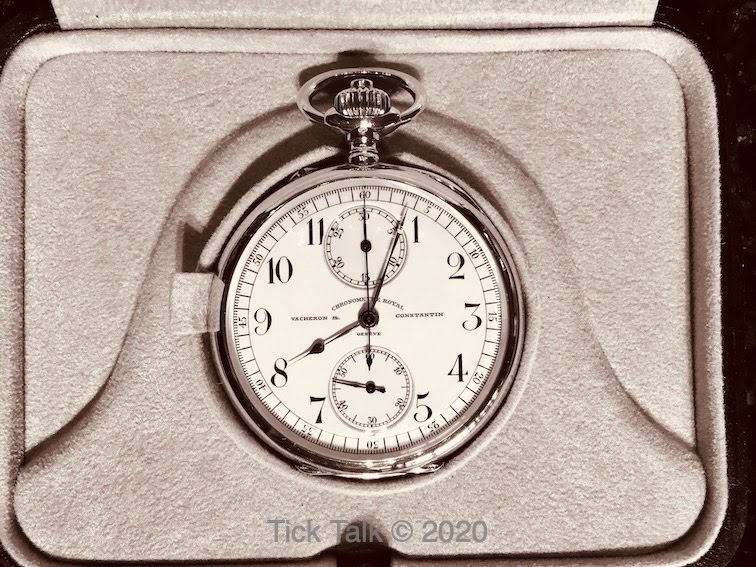 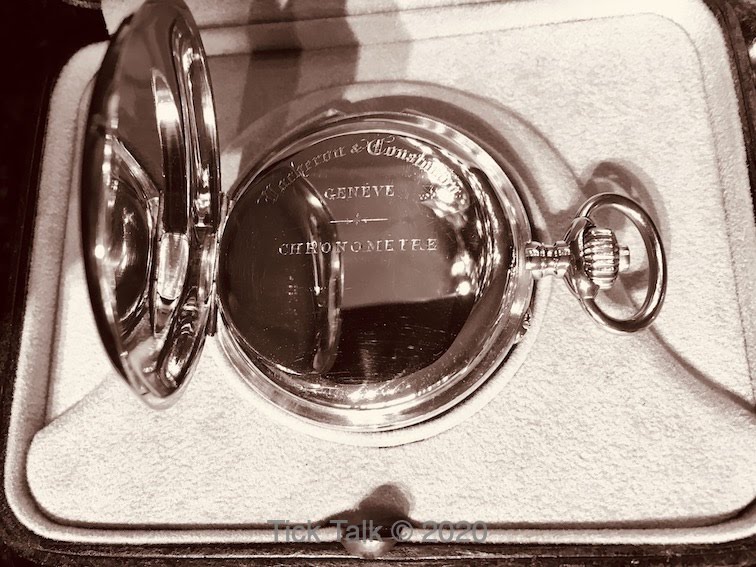 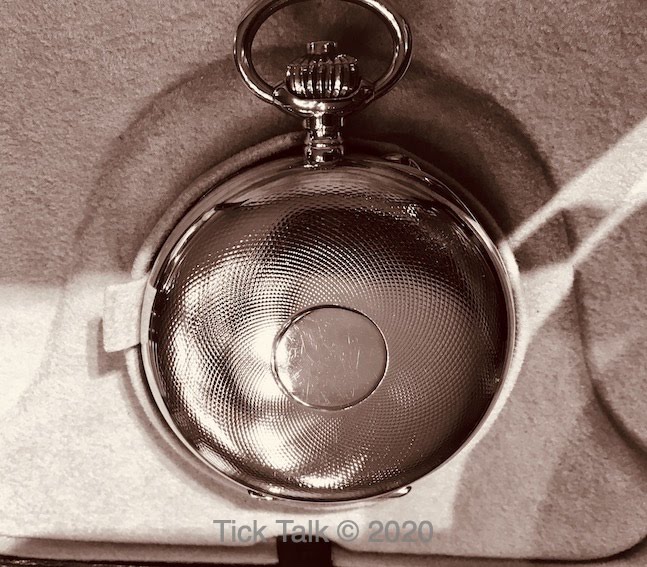 Having found that Campos responded to the challenge of the Chronometro Gondolo much earlier than previously believed, we shouldn’t be too surprised they would have reacted to the Gondolo Chronographo with equal alacrity and explored the viability of offering their own chronograph.  We can assume it wasn’t successful as this version with 30-minute counter appears to be the only known example. 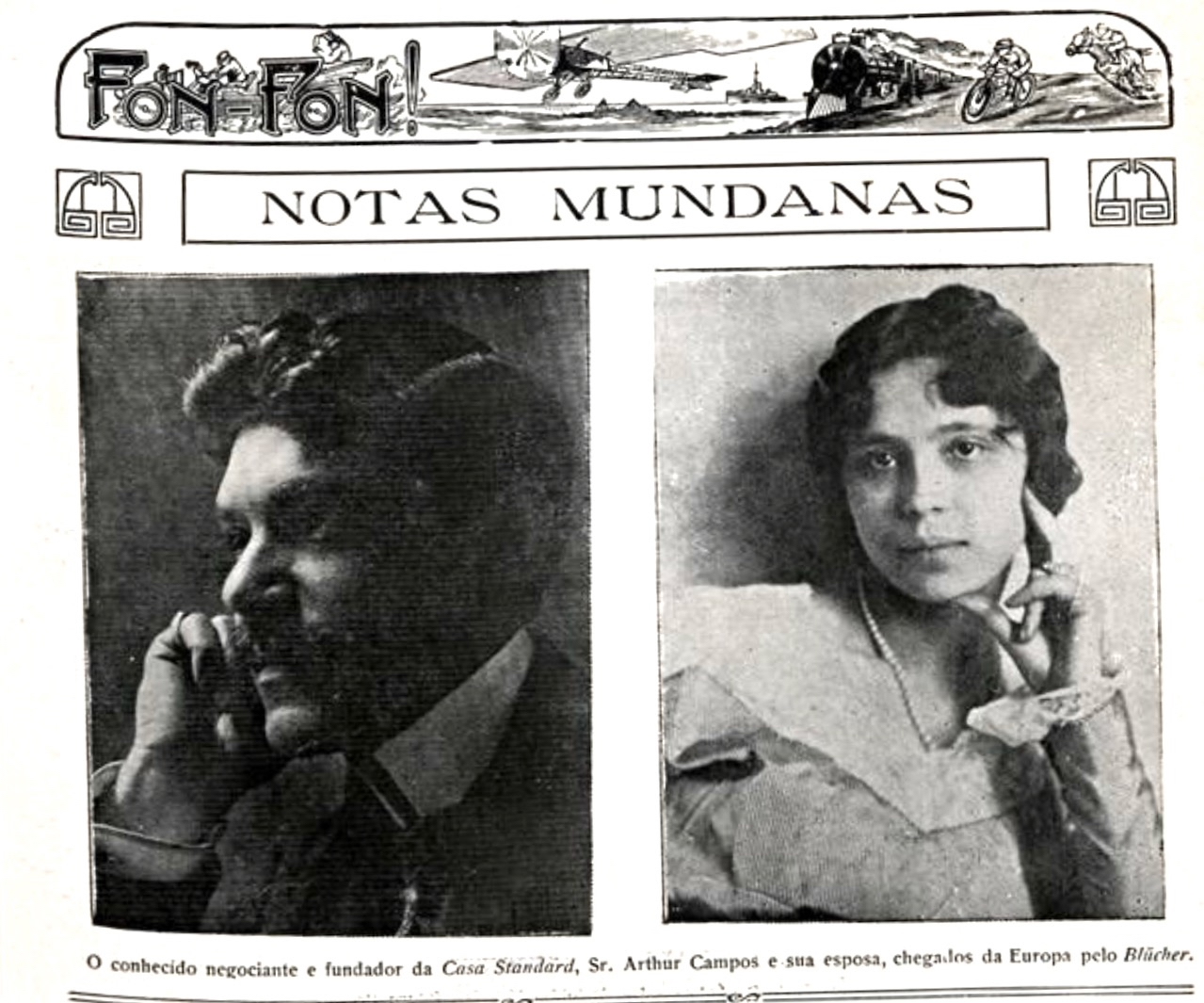 The archives at Vacheron Constantin confirm the watch was completed in 1910.  I am exceedingly fortunate this piece was thoroughly documented in the past so there are other fascinating details to share.

The 18 karat four-part bassine-style case measures 52 mm and was supplied by Eggly of Geneva in 1910.  The watch was completed shortly thereafter and sold to Campos that same year.

Its 19-ligne pin-set, stem-winding ebauche was provided by the chronograph specialist Marc Goy-Baud and finished by V&C in 1906.  I have been informed by those more expert in these devices that the mechanism is a semi-instantaneous type; the minute counter advances over 2 seconds with a final jump as the central seconds hand reaches 60.  Activation and reset is achieve with the push a the button in the crown. 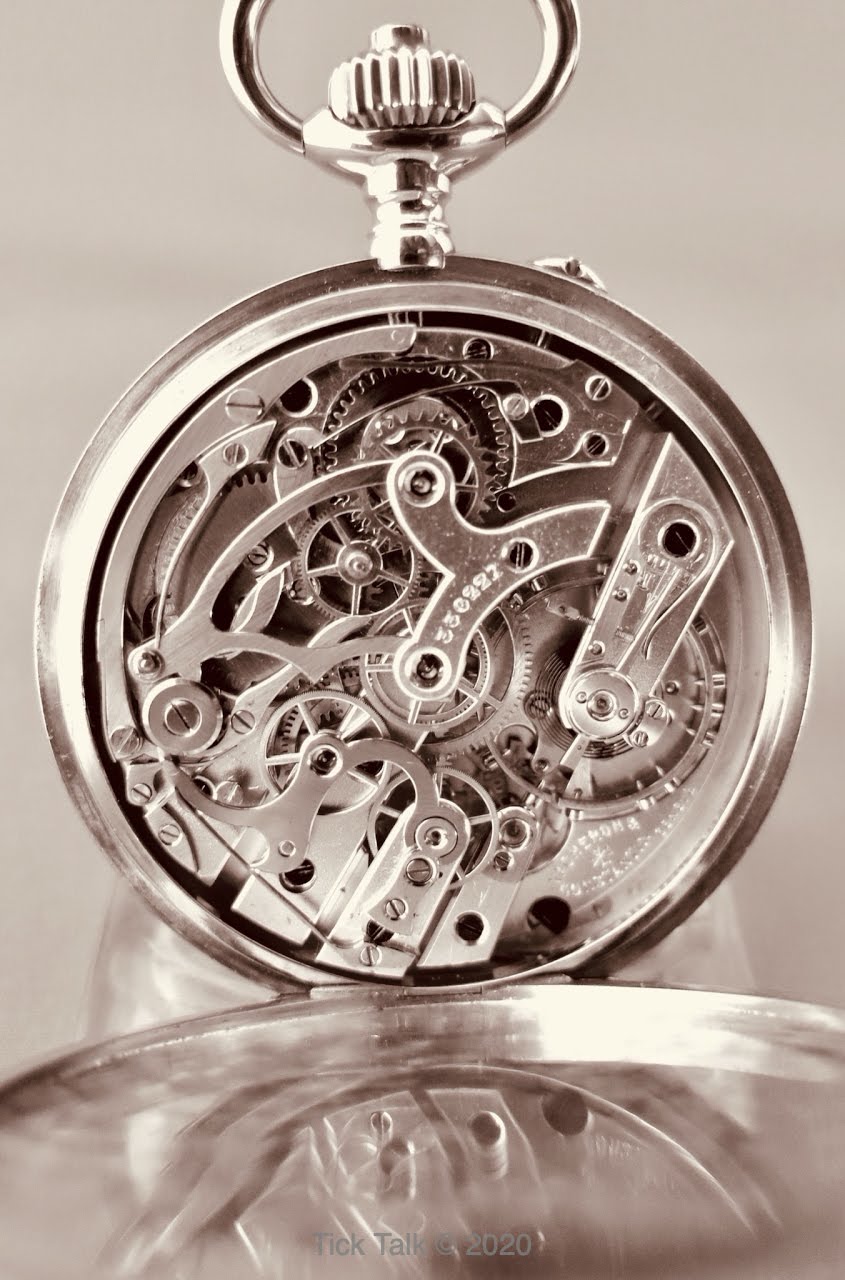 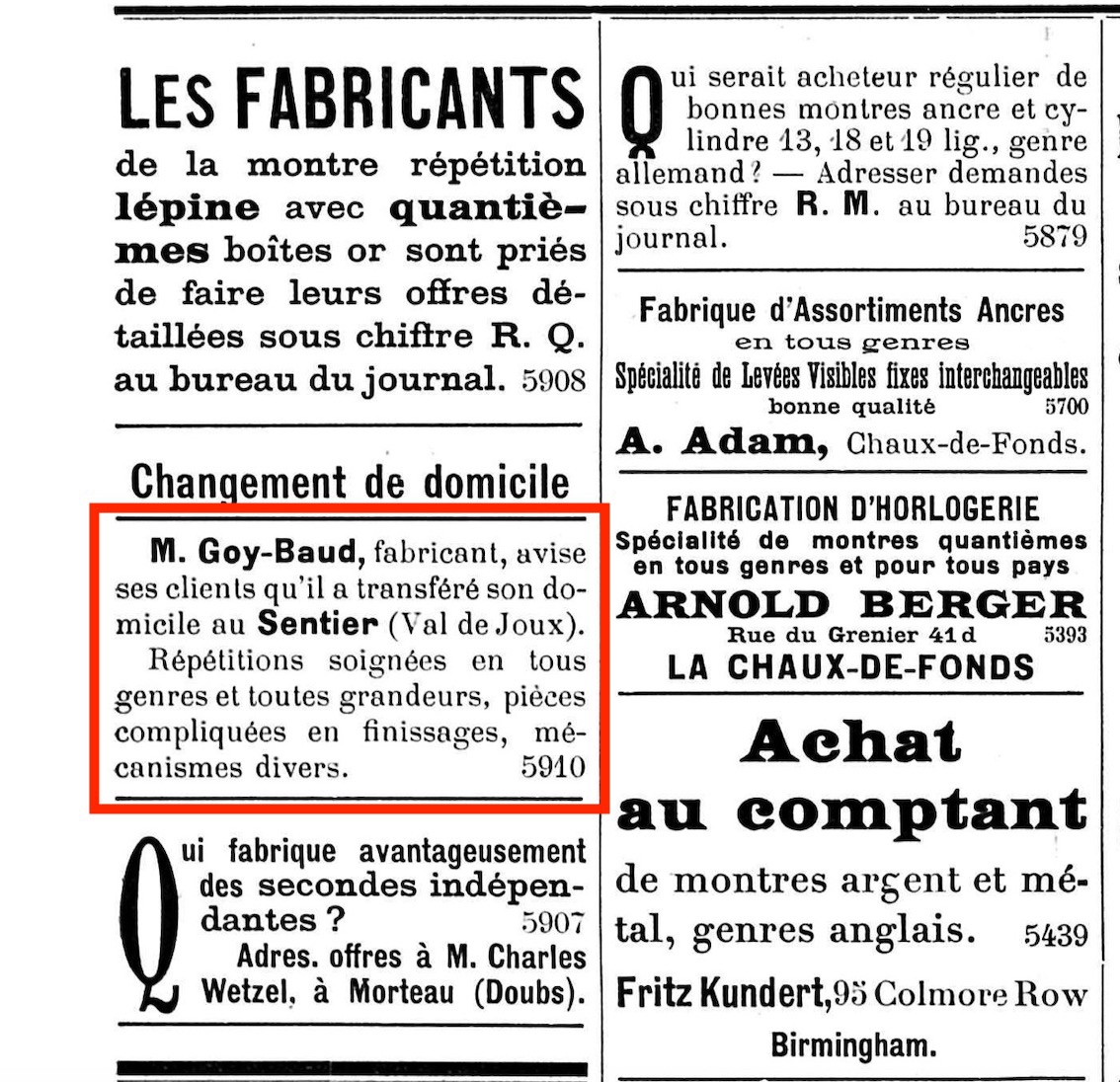 Verifying the CHRONOMETRE inscription on the cuvette remains a work-in-progress.  The Observatoire de Genève began testing chronographs following a change in the rules for 1909, under a new classification of Pièces compliquées.  Vacheron & Constantin were very enthusiastic for the opportunity and submitted numerous chronographs in the proceeding years.

Once everyone is back in their offices, with access to the records, an answer should be forthcoming.  If confirmed, it would be the cherry on an already delicious cake! 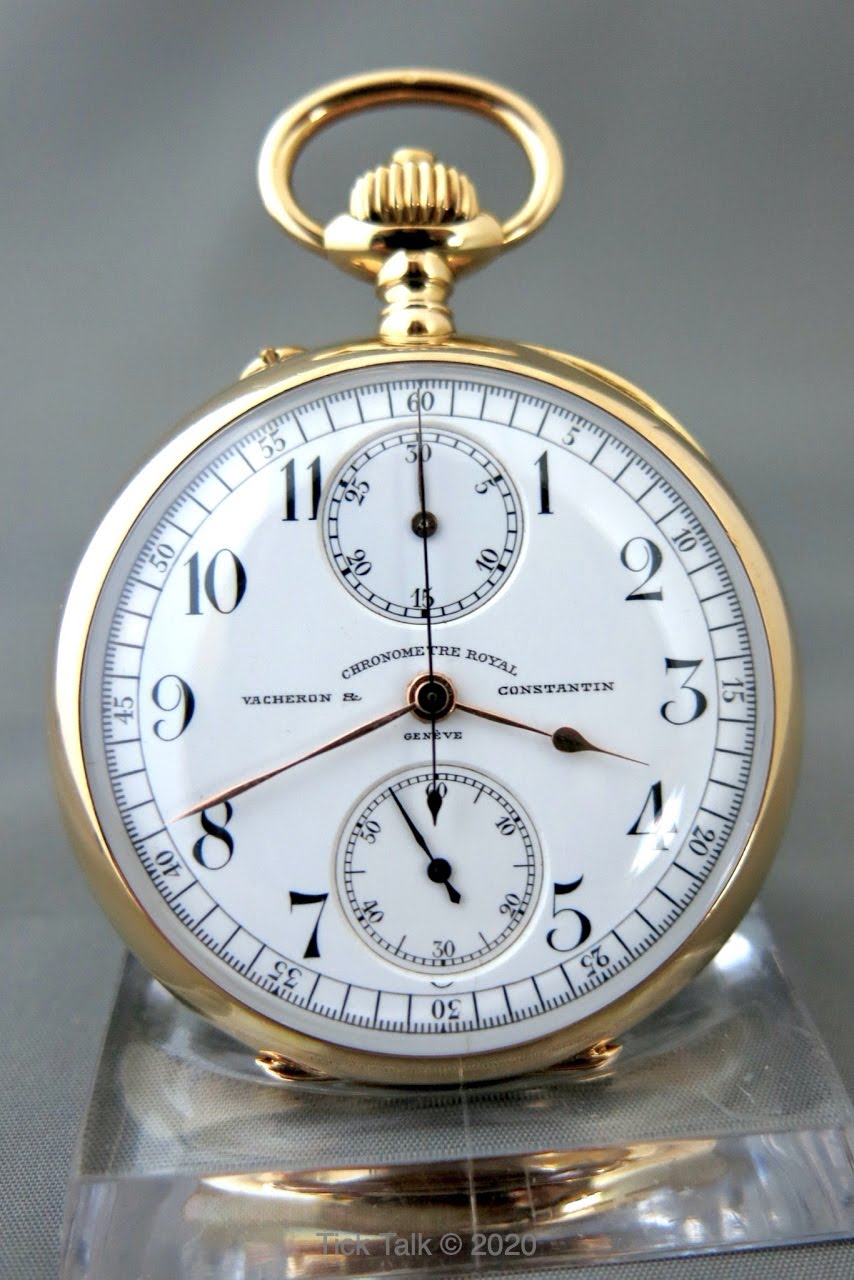 This concludes my trilogy on the Chronométre Royal in Brazil.  With the precedent for complications now established, wouldn’t it be amazing if the wizards at Plan-les-Ouates provided us with a new Chronométre Royal Chronographe? 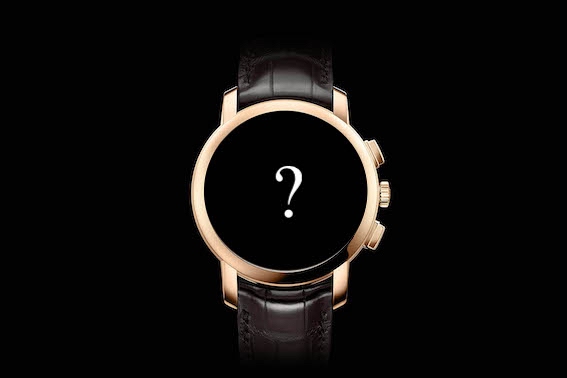 By: Tick Talk : April 19th, 2020-11:12
Tick Talk © 19 April 2020 If you believe auction house notes, there were only twenty-five Chronometro Gondolo Chronographo watches produced for Gondolo & Labouriau; most being one-minute chronographs and six with 30-minute registers. They were advertised ...
login to reply

Excellent, my friend. Like you, I hope that Vacheron will release such a watch in a wrist watch, WITH a manual winding movement! [nt]

It would be a very enjoyable discussion

By: Tick Talk : April 19th, 2020-12:34
to "skylark" about such a timepiece. An enamel dial with the distinctive Chronomètre Royal arcing banner, monopoussoir button in crown, two sub-dials dials arranged one on top of the other, with the top being 30-minute totalizer in homage to the original,...
login to reply

I am following you, totally. [nt]

With the Tourbillon on the backside, yes! [nt]

So where have all the vintage enthusiasts gone?

By: Tick Talk : April 20th, 2020-10:43
We used to have more robust discussions about V&C history and vintage watches. I wonder if pocket watch collecting has gone the way of clock collecting; too niche to matter?
login to reply

Aaah, my friend... I wanted to discuss something which may be related to Vacheron...

I cannot remember where I saw it, at the Manufacture or at a parisian dealer. I even wonder if I didn't stupidly pass on it... [nt]

I see the desire remains strong

Gondolos chronometers are still around

By: Indigo : April 21st, 2020-06:52
There are quite a few in MercadoLivre Brazil in excellent condition, some even with the original box.
login to reply

Is that a safe site?

By: Tick Talk : April 21st, 2020-07:22
Some time ago I registered on Mercado Livre and within 15 minutes got spoof email, so I assumed the platform was corrupted.
login to reply

MercadoLivre is an eBay company

By: Tick Talk : April 21st, 2020-13:17
I was feeling playful so created this image of the Chronomètre Royal Chronographo. Since posting this I also heard from someone with great experience that a few other chronographs have surfaced over the years in the Chronomètre Royal family, and versions ...
login to reply

A marvel. Do you have pictures of the movement? [nt]

Chronograph, time only, everything! Even the movement used in the wrist watch, based on a JLC calibre. But I learned something new, thanks to your thread, the CR was also a Chronograph! [nt]

Informative and food for thought

By: Age_of_Surfaces : July 19th, 2020-09:59
Hello. I'm returning the compliment that you posted on another forum to say, Thank You, for these excellent investigations. Much appreciated.
login to reply

These are enjoyable reads

By: Age_of_Surfaces : July 19th, 2020-10:00
Hello. I'm returning the compliment that you posted on another forum to say, Thank You, for these excellent investigations. Much appreciated.
login to reply

An update re chronometer

By: Tick Talk : July 19th, 2020-11:30
You may recall I was seeking an explanation for the engraved "CHRONOMETRE" on the cuvette of this Chronometre Royal Chronographo. The usual venue that V&C submitted watches for chronometer testing was the Observatoire de Geneve and they were in Covid clos...
login to reply