We won something anyway! 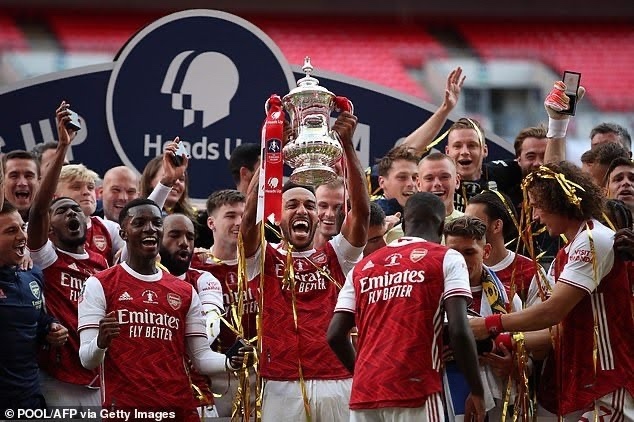 We won something anyway!

The FA Cup is to football...

By: NickO : August 1st, 2020-13:42
What the Ms. Congeniality award is to a beauty pageant. Slightly higher than a participation trophy, but significantly less than being an actual winner. If you’d like to know what winning sounds like, the resonance made by the Premier League trophy curren...
login to reply

Yes, the Cup we won 5 times before Liverpool won its first, right?

Actually, Arsenal only won the FA Cup three times before Liverpool won it in 1965

By: NickO : August 1st, 2020-18:36
But respect is due, you guys have won it a record 14 times. Now here’s the real question for an Arsenal fan: if you could only have one, would you prefer the FA Cup win today or Aubameyang signs a new long-term contract?? 🤔
login to reply

I was talking about the Premier League trophy. [nt]

Not sure where you're getting your info from ya mad Druid

By: NickO : August 1st, 2020-20:39
Liverpool were crowned English Champions in 1901. Arsenal didn’t win the title for the first time until 1931, after Liverpool already had 4 titles.
login to reply

The Premier League didn’t start until 1991.

Of course it counts.

By: TheMadDruid : August 3rd, 2020-09:18
I was referring to the PL, and limiting what I was talking about to that era. Which is pretty much what everybody does when discussing English football these days. TV and newspapers.
login to reply

You are right, they do.

By: Jay (Eire) : August 3rd, 2020-11:30
It’d be pretty odd if we suddenly decided to rename (rebrand) the Super Bowl and then conveniently forget the Patriots were so dominant.
login to reply

I don’t think that would be a bad idea. [nt]

Always had a soft spot for the Arsenal, had been to Highbury several times (when in London, and Bergkamp or Henry are there then why not).

By: Jay (Eire) : August 1st, 2020-15:39
Nice to see them win. Shame the FA Cup has been relegated to almost insignificance. Those were the greatest soccer days of my childhood, regardless of who was playing.
login to reply

Yes, I remember growing up the FA Cup meant something

By: NickO : August 1st, 2020-16:16
Today, there’s too much football and it’s a second-tier competition. Shame. And the Gooners have had some great teams over the years (I’m just not telling the Druid that). If you get a chance, check out the Netflix series “The English Game”. It’s all abou...
login to reply

Will check it out. Did you watch “Sunderland till I die” ? I thought it was fantastic.

No, I’ll have to check that out, thanks!

The Premier League started in 1991.

By: NickO : August 2nd, 2020-16:37
Yes, the Premier League started in 1991 and, yes, this is the first time Liverpool have won it. But it was hardly a new league, it was simply the rebranding of the FA Division One which was the top flight of English football for over a century. So nothing...
login to reply

As I responded to Jay above-

By: TheMadDruid : August 3rd, 2020-09:24
I was talking about the PL. It's an era. It's what's discussed on TV and in the newspapers. That's all. How about this: since Liverpool last won a League Championship Arsenal won 3.
login to reply

By: NickO : August 3rd, 2020-12:39
BTW, you didn’t answer my question on Aubameyang. I hope you guys come to terms with him, he’s a world-class striker.
login to reply

I would say I’d rather have him signed than win the 14th FA Cup.

If it is the equivalent of our " coupe de la ligue ", it is the last one in France. They just stopped it. [nt]

By: TheMadDruid : August 1st, 2020-14:50
The tournament is played by teams from several levels of competition below the Premier League and the PL teams. The League Cup tournament is different.
login to reply