I was blown away by the sheer comfort & level of detail on a Seiko. Never in a million years did I think I would spend that kind of $$ on a Seiko.I took a chance & purchased 1 sight unseen from Toppers & I'm sure glad I did. Like you I'm a strap guy & this 1 stays on the braclet exculsively. The bracelet ,dare I say is out does Rolex by a country mile IMO. & that Blue hand is over the top.Dial is Amazing in person but very hard to capture in a pic , unless like you , myou have a nice camera & macro. 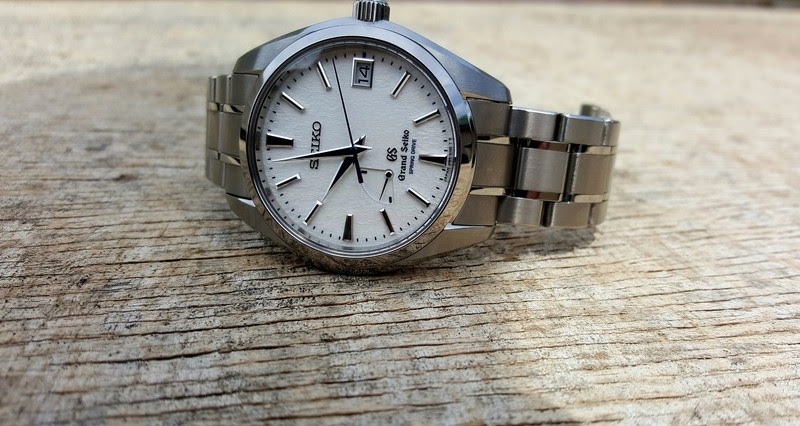 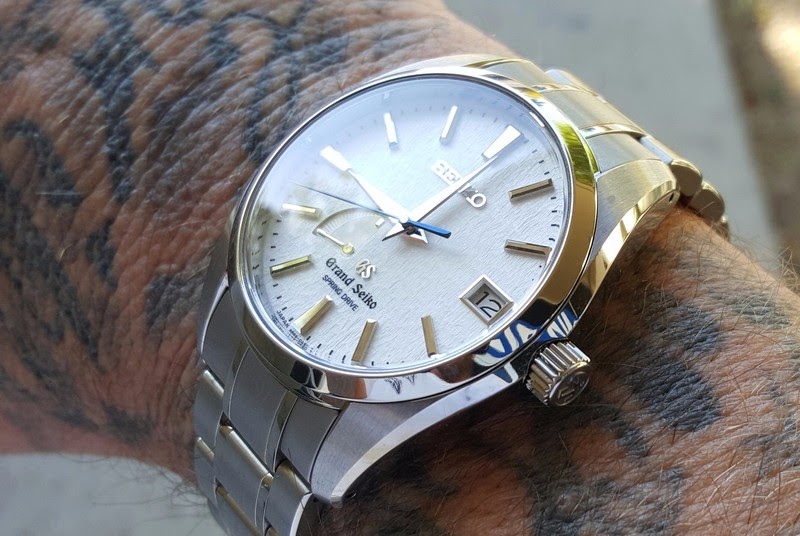 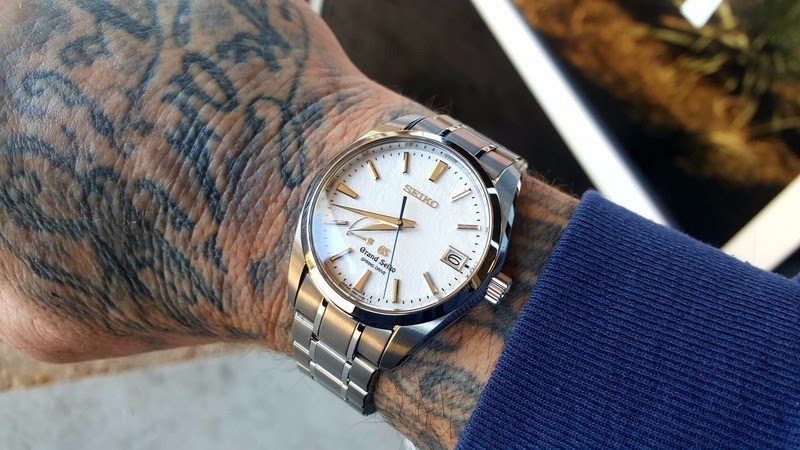 By: skyeriding : April 17th, 2017-08:11
What a dial. Released in 2010, the Grand Seiko SBGA011 remains one of the iconic timepieces in the GS product lineup and needs little introduction. It is often referred to as the "Snowflake", due to the notable white textured dial like snow. As Baselworld...
login to reply

Thanks mahesh. It took some effort to get the photography done...regards, skyeriding [nt]

Your close-up photos are superb and just wow! Thanks for sharing the nice report. [nt]

Thank you Raymond. Note that the pictures can be zoomed in further for more details at full size! Regards, skyeriding [nt]

Thanks for this great review and stunning pictures

Thanks SvB, this was a watch I find is easier to like the longer you have it. Regards, skyeriding [nt]

Many thanks for your report. Very interesting. And what about your macro shots. Just stunning!!!

Thanks Alkiro. It was fun to piece together the review

By: skyeriding : April 17th, 2017-22:15
Having to write a coherent review together with the associated pictures takes more effort than I thought. I hope this write-up serves its purpose... Regards, skyeriding
login to reply

By: KMII : April 17th, 2017-13:34
And the pictures You have outdone yourself yet again! Do I understand it correctly that this is your latest addition to your collection? In that case congratulations are in order!
login to reply

Thanks KMII, yes it is

By: skyeriding : April 17th, 2017-22:18
I was hugely driven due to the revision that I disliked. While a SBGA125 was my initial dream, its unavailability drove me back to the Snowflake. I believe I'm starting to prefer the dial over the Blizzard... At the least, an attempt at a review is what I...
login to reply

A great review at any rate :)

I believe the snowflake is much more unique...

By: travelller : May 25th, 2017-04:34
...at least I've never seen anything like it before whereas the "Blizzard" - although surly well-executed, has a more "familiar" appearance... . Enjoy your snowflake
login to reply

By: travelller : May 25th, 2017-05:17
*The Yachtmaster (SS w/Pt dial) comes to mind and while not in the same class, Omega's GSOTM - both using platinum "dust" IIRC. Again, I place emphasis on the term "familiar" and [certainly] not "same"
login to reply

I went looking for a snowflake...

"Only"...the same way I am "only" envious now! Congratulations on the watch! Regards, skyeriding [nt]

By: skyeriding : April 17th, 2017-22:21
As a dress watch guy, I'd love to try a strap eventually. However I'd like to do it safely with the proper tool, I still like the bracelet, and also I feel due to the lug sizes it may look a little too bulky relative to the strap width... I will likely ta...
login to reply

Thank you for sharing such a detailed in-depth written and photographic review.

A great review! And superb pictures!

By: stromer : April 18th, 2017-00:47
As the Snowflake is the one GS that might make it into my small collection one day, I was thrilled to see your detailed and comprehensive review. Thanks a lot for that! Best, Martin
login to reply

Thank you stromer. I'm curious what will come out in the future from GS given their rebranding - perhaps a new iconic piece hopefully. Regards, skyeriding [nt]

Thanks for the detailed review

By: benlee338 : April 18th, 2017-04:27
Among the best I have read in puristpro so far and your pictures are excellent. I do not yet own a Grand Seiko but I have friends that do and I have the chance to try one on. I have to say the finishing is certainly impressive. However, I am curious to kn...
login to reply

Thanks ben for the praise.

By: skyeriding : April 18th, 2017-05:57
Take my words with a grain of salt, as I do not own anything of a category within the Trinity/ALS range etc., and have little experience handling them in person. My opinion is that GS excels particularly in certain facets, while understandably has to comp...
login to reply

By: cazalea : April 18th, 2017-11:27
After reading that you'd uploaded full size images, I went to my iMac and found a 27" diameter Snowflake! Just a comment about movement finishing - the Spring Drive can be finished in many different style, depending on Seiko's choice - it's not that they ...
login to reply

Late response from my side,

By: skyeriding : April 22nd, 2017-01:13
I find it difficult to put into words, but perhaps its Seiko's design cues for the movement that I feel is underselling itself? For instance, the hi-beat GS models I feel could be done more interestingly. The bridges all have no anglage at all - machined ...
login to reply

Speaking of mvmt-finishes and your initial interest in the SBGA125...

@travelller: both the SBGA125 and SBGA011 use the (exact?) same 9R65 movement with same decoration. The other pic in the link is for the hi-beat. Regards, skyeriding [nt]

Well then maybe it's just the angle of the shot...

By: tom2517 : April 18th, 2017-11:42
Correct me if I am wrong, but I read somewhere that someone from GS has indeed said that the dial was originally meant to be a representation of white textured paper. But since the name snowflake was taken on by the market, GS just went along with it.
login to reply

By: cazalea : April 18th, 2017-12:10
GS Dealer 1 says: "The dial, for which this reference is monikered, is famous for having undergone a 9-step process to produce a finish resembling fresh snow. However, there doesn't seem to be a pure consensus about the exact inspiration for the dial. Som...
login to reply

By: tom2517 : April 19th, 2017-00:54
the person who said it was based on textured paper was not a GS dealer, but rather someone at the GS manufacture. Anyways it's not important, if one day I ran into that article again I will post the link.
login to reply

Thanks for a very

By: halkcb : April 18th, 2017-18:06
incisive and comprehensive report on the "snowflake". Your photos are so well shot and show such great detail.I wish i could have your skills to highlight the "Blizzard",both in text and photos! Many thanks once again and enjoy your watch! best
login to reply

By: skyeriding : April 22nd, 2017-00:52
I was strongly drawn to the Blizzard over the Snowflake due to the case shape but when I started liking it, it was already long gone... Nevertheless, I haven't had a watch yet that has given me such pleasure until the Snowflake came along! Regards, skyeri...
login to reply

It's amazing, isn't it? Could just keep staring at the dial and sweeping seconds, enjoying that finish all day long. Regards, skyeriding [nt]

Thanks for your delicate review and there's one question

By: calatravayang : April 28th, 2017-00:24
Hi skyeriding, I'm also a happy owner of this snowflake.........'s brother SBGA001. Although I preferred the snowflake dial quite a lot by many close-up photos, I changed my mind after seeing them in life. The delicate sunbursted cream-colored dial of SBG...
login to reply

By: skyeriding : April 28th, 2017-09:44
As far as I've had it for the relatively short time so far (around a month), I don't really notice the date wheel shifting around; even giving it a few shakes or nudging it with the quickset date. I do notice however, that the date wheel sits relative "de...
login to reply

By: calatravayang : April 28th, 2017-16:34
Initially I also thought it was due to a visual illusion caused by different view angles. However, I'm sure it's not soon. It doesn't influence by any motion nor vibration neither. I've tried to "reset" the date by quick-set, but nothing changed. The only...
login to reply

By: cazalea : May 25th, 2017-10:29
The photos from that time confirm this (yes, I was excited to get this watch and drank a great bottle in self-congratulations) Looking at the layout of the movement I see nothing unusual in the date change mechanism, so either it's a fluke or perhaps the ...
login to reply

Thanks for your experience sharing

By: calatravayang : May 25th, 2017-10:49
The only thing I confirmed is the issue I mentioned doesn't result from different viewing angle. I'll point out this issue during maintenance and seek for the answer.
login to reply

By: skyeriding : May 25th, 2017-09:57
Best to handle them in person if possible - you'd never know what you'd find that you'll like! Especially with GS and their unique dials, they are appreciated much differently in real life versus still photos. I did manage to handle a SBGH037 which I'd ha...
login to reply

By: benlee338 : May 28th, 2017-04:10
Hi skyeriding, I am curious to know what is your take on the old vs new dial for this model? As you know, the new dial will only have the GS word and logo. It does have the effect of making the dial looks slightly less balance, as some have opinion.
login to reply

I only just managed to read your review in its entirety...

By: rnaden : May 29th, 2017-06:24
Great review, which is what I can say, with some really amazing close ups to illustrate the points. I'm thinking hard about adding a spring drive and this is now at the top of my list, thanks to your very well composed review. I suppose I have to act fast...
login to reply

By: skyeriding : May 31st, 2017-07:30
To me the grail is still a SBGA125, but that is long gone. Nevertheless, I appreciate the design of the 011 snowflake more and more especially after doing the review. Give a think about it especially if you want to buy new as I don't know how long before ...
login to reply

Thank you for the amazing pictures and analysis!

By: jh8cw : May 29th, 2017-21:03
I'll try to take a few close up shots with my iPhone 6s and upload some pictures of SBGA211 and provide a few close-ups of dials! The snowflake rotates in with 2 other watches for the working days and is a true keeper! I originally aimed at trading in a w...
login to reply

By: skyeriding : May 31st, 2017-07:49
With regards to case, the lugs definitely are chunky, which is why I feel aesthetically it works better on bracelet than a strap (which might not flow too well given the size). As a strap guy most of the time, this one made me like bracelets - though I ma...
login to reply

Love how the lighting makes it look like the indices are gold plated! [nt]

I'll probably try some Camille Fournet straps when I've some money put aside.

By: jh8cw : May 31st, 2017-18:57
They allow for the building of custom straps, custom thickness, etc. I can let you all know what they recommend for the dimensions.
login to reply