Hands on review with the Seiko King Seiko 140th Anniversary

Mar 01, 2021,13:11 PM
Seiko's history began in 1881 when Kintaro Hattori opened a watch and clock sales and repair store in Tokyo. The Japanese brand plans to celebrate this 140th anniversary with a number of limited edition watches. Among these, the reissue of the King Seiko KSK from 1965 stands out. There is something amusing and paradoxical in the Seiko Group's approach to this watch. For several years, it has been working to clearly separate Seiko from Grand Seiko. The latter has become an independent brand with its own strategy and the only name "Grand Seiko" on the dial. And in a way, the reissue of the King Seiko KSK goes against this strategy. Why is this? Quite simply because the quality of the finishing and the aesthetic details implemented make it more reminiscent of a Grand Seiko watch than a Seiko watch. 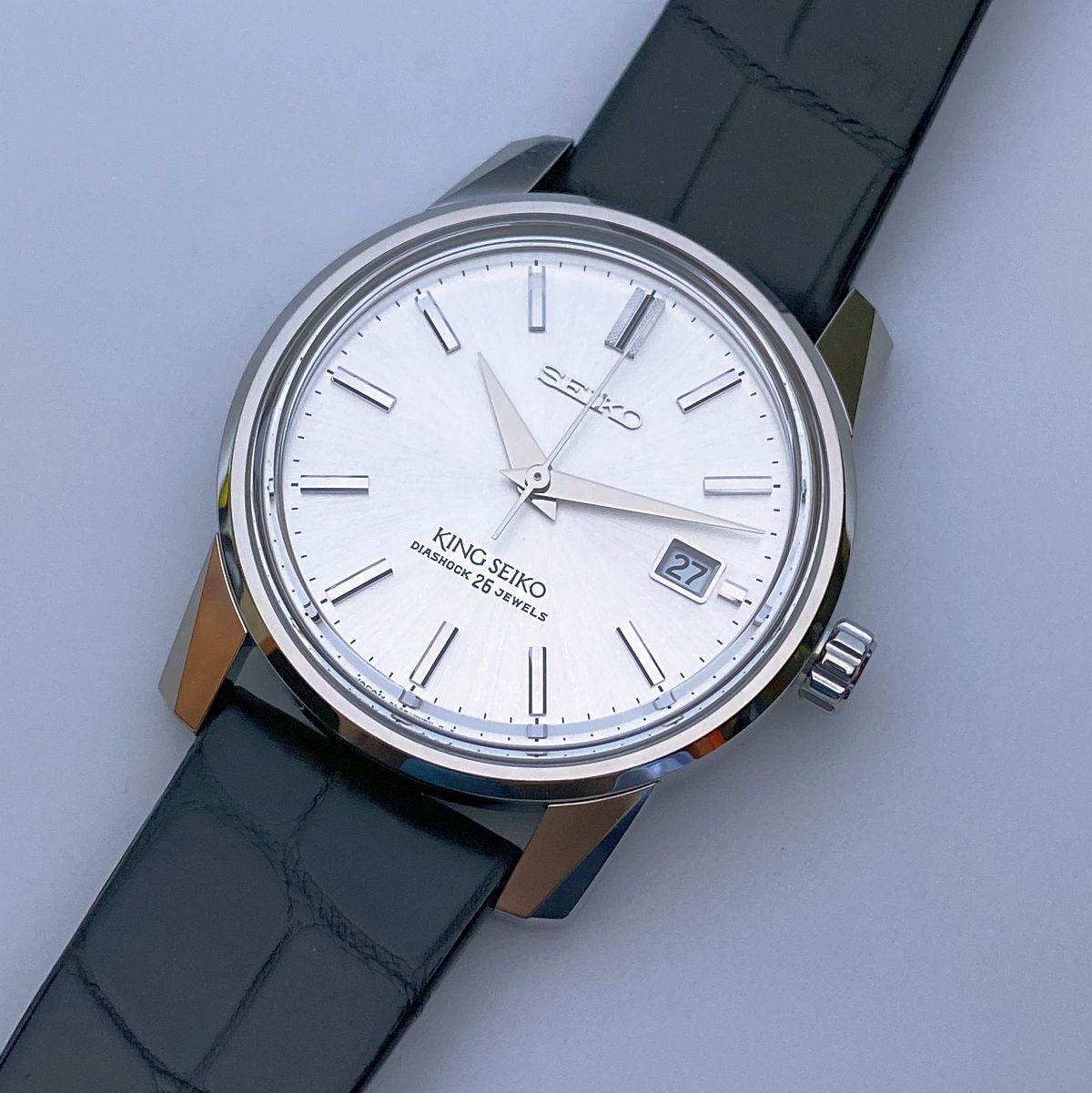 Certainly, and we will come back to this point later, the movement that powers the King Seiko 140th anniversary is specific to Seiko. But I found it interesting to make this remark... which is a way to underline the excellent perceived quality of this model.

The King Seiko 140th Anniversary is a classic, simple, 3-hand watch with a date window at 3 o'clock. We all know that it is very difficult to make a singular piece in this ultra-standard setting because there are ultimately few degrees of freedom. Seiko succeeded in doing so because at the base, the original model was distinguished by details that forged its identity: the angular lugs and the faceted indexes. Luckily, Seiko has taken them back and adapted them to a contemporary context. In fact, the reissue is distinguished by 3 main differences: 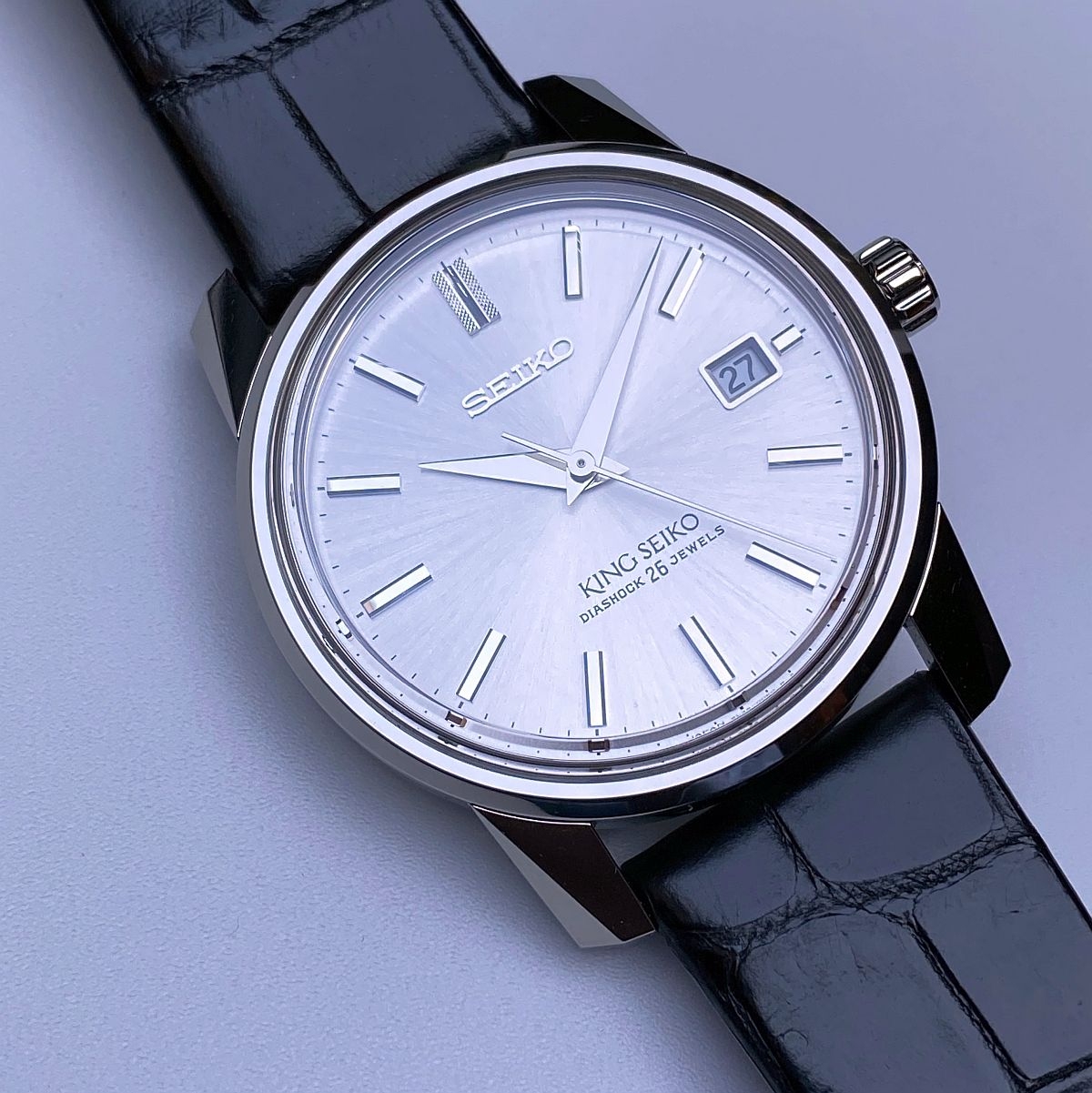 For the rest, the reissue is faithful to the watch from 1965 and retranscribes with great success the effects of light and relief due to the work on the lugs and indexes. If the steel case with a diameter of 38.1mm is round, it is not the roundness that characterizes this piece. On the contrary, it is considered to be an angular watch. This feeling is accentuated by the reflections on the lugs, whose shapes give a lot of energy and personality. The Zaratsu polishing used to finish the lugs is in any case very effective: they play with light, creating zones of varying intensity that contrast with each other. This bright, shiny appearance combines perfectly with the impeccably executed dauphine hands. Undoubtedly, the perceived quality of these elements is reminiscent of Grand Seiko. 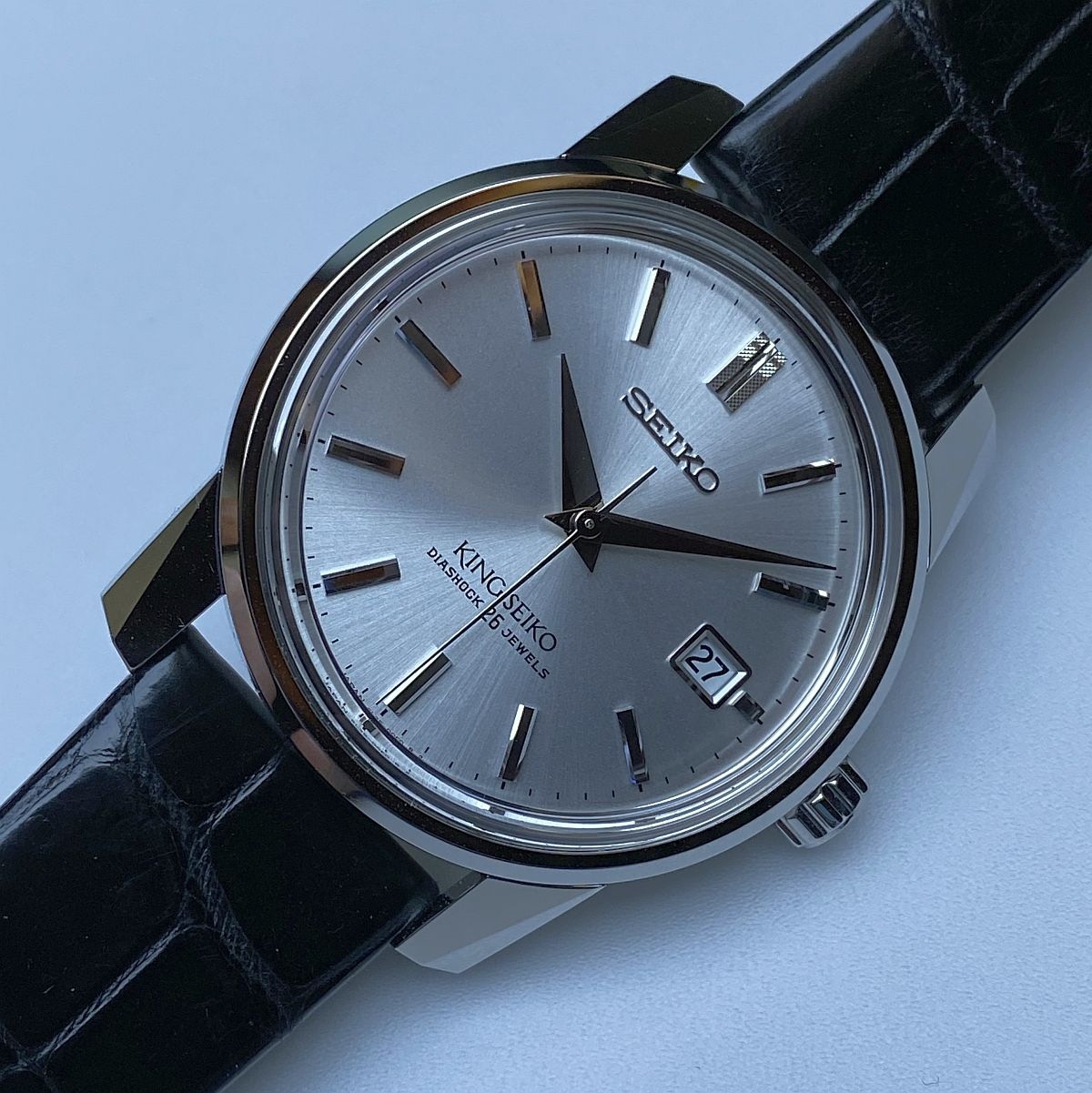 The dial, at first glance, seems sober. A closer look reveals full-volume hour markers and a faceted double-index at 12 o'clock (actually composed of three parts) that offers an alternative clou de Paris-like texture at both ends. These indexes contribute greatly to the feeling of excellence that emerges because they give relief to the dial. But above all their visual rendering is perfect, both from the point of view of the execution and the way they have been positioned on the dial. The finish of the silver dial is also impeccable with its sunny effect. It also highlights the other elements. The result could have been perfect if Seiko had not decided to insert a date window. I would, as often, have preferred the watch without it. However, it must be said that this date window does not harm and its own aesthetics works well with the indexes. 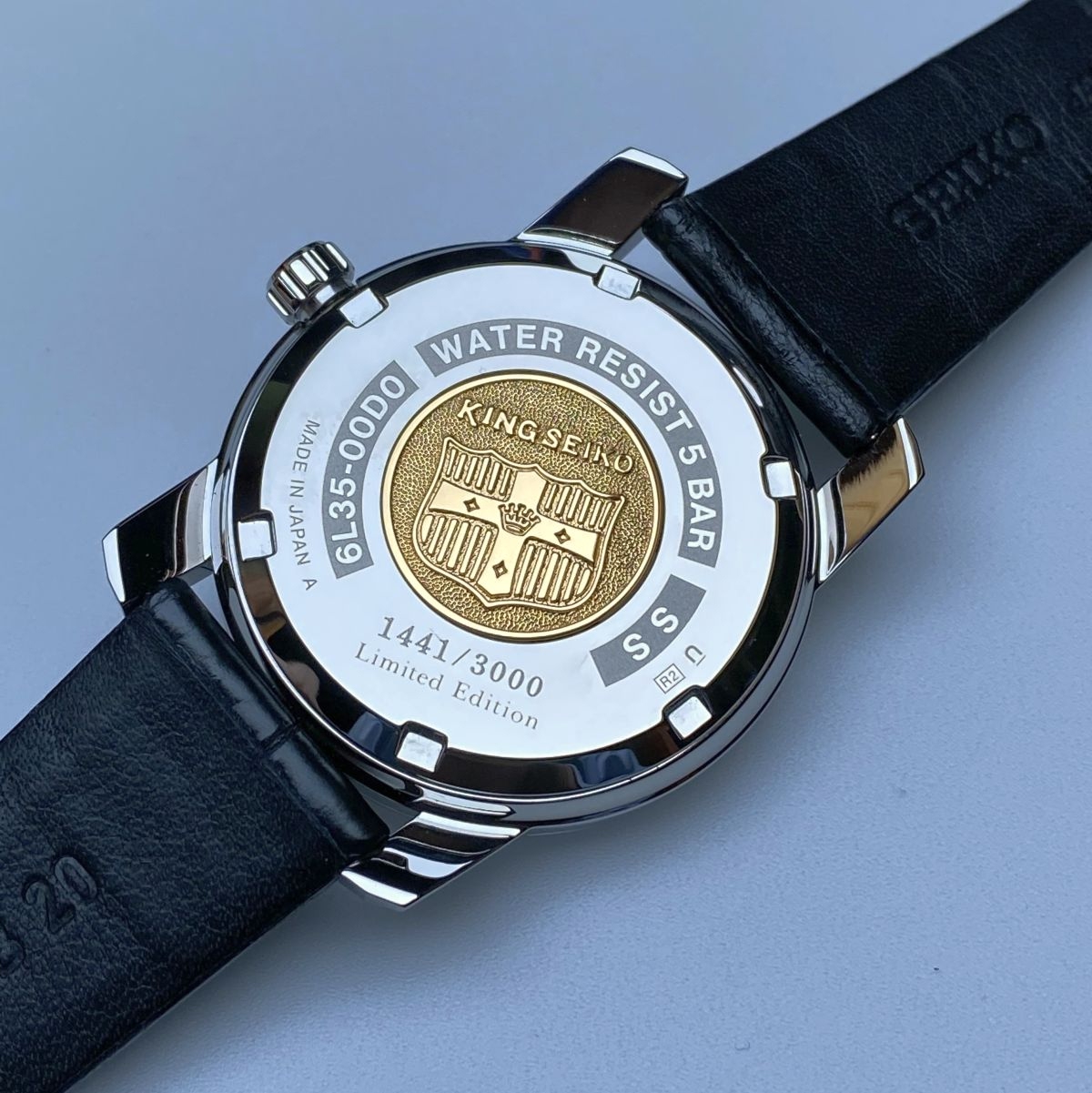 The case back is full and this is also great news. First of all because it gives Seiko the opportunity to decorate it nicely as with the original watch. The King Seiko coat of arms adorns this case back and reminds us of the desired refinement. Then because the 6L35 movement that powers the 140th anniversary King Seiko is not breathtakingly beautiful.

It is, however, an excellent automatic movement with bidirectional winding that is used with several Presage watches. Considered a direct competitor to the ETA2892-A2 (it is very close in performance and size), it is characterized by its thinness (3.7mm) and its homemade anti-shock. In fact, the use of this automatic movement has almost no effect on the thickness of the case of the 140th anniversary King Seiko since its height is only 0.5mm higher than that of the 1965 watch. Its power reserve is 45 hours for a frequency of 4hz, which is a little short by today's standards. 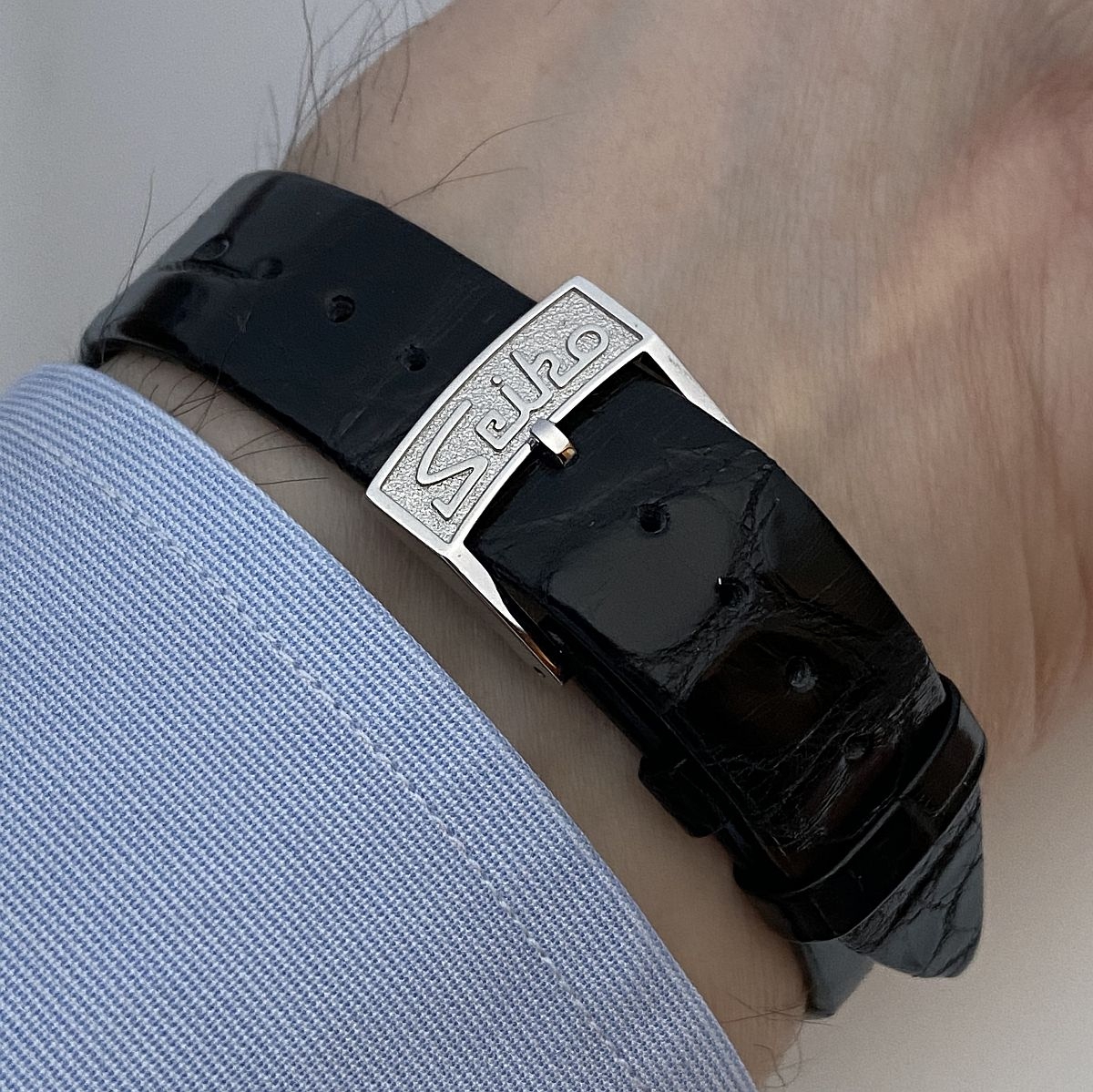 The real problem with this movement is the way Seiko communicates its accuracy performance: -10/+15 seconds per day. Such a range is hardly tolerable and in fact Seiko would not tolerate it in a concrete way. The movement is capable of much better accuracy. This way of communicating always leaves me perplexed. Is it a desire to avoid any unpleasant surprises and the reaction of a customer whose watch would not respect the range? Is it a modest way of presenting things? Is there a cultural dimension behind this extremely cautious communication? I don't know but it seems to me that Seiko should work on this and commit to more ambitious ranges. 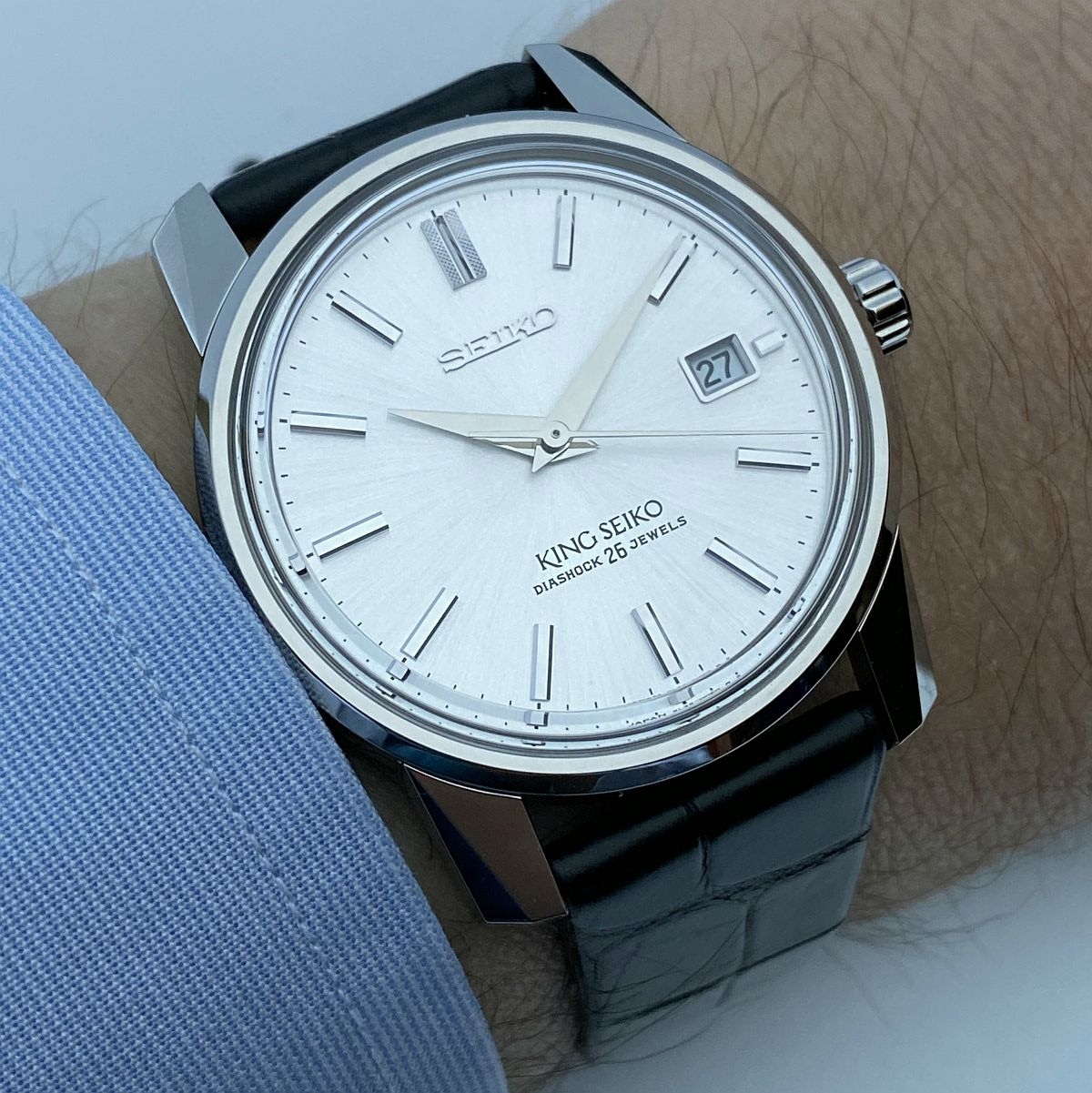 All this did not prevent me from appreciating the 140th anniversary King Seiko to its true value. When I put it on my wrist, I was immediately seduced by the work on the case, the lugs and especially by the play of light it causes. This watch, qhich is quiet at first glance, turns out to be very lively and energetic thanks to the multiple reflections it creates: the lugs, the dial, not forgetting the shape of the glass which accentuates the volumes... And let's not forget one of its assets that appears when turning the wrist: the pin buckle that accompanies the flat black crocodile strap is magnificent. It's one of the most beautiful I've seen recently. 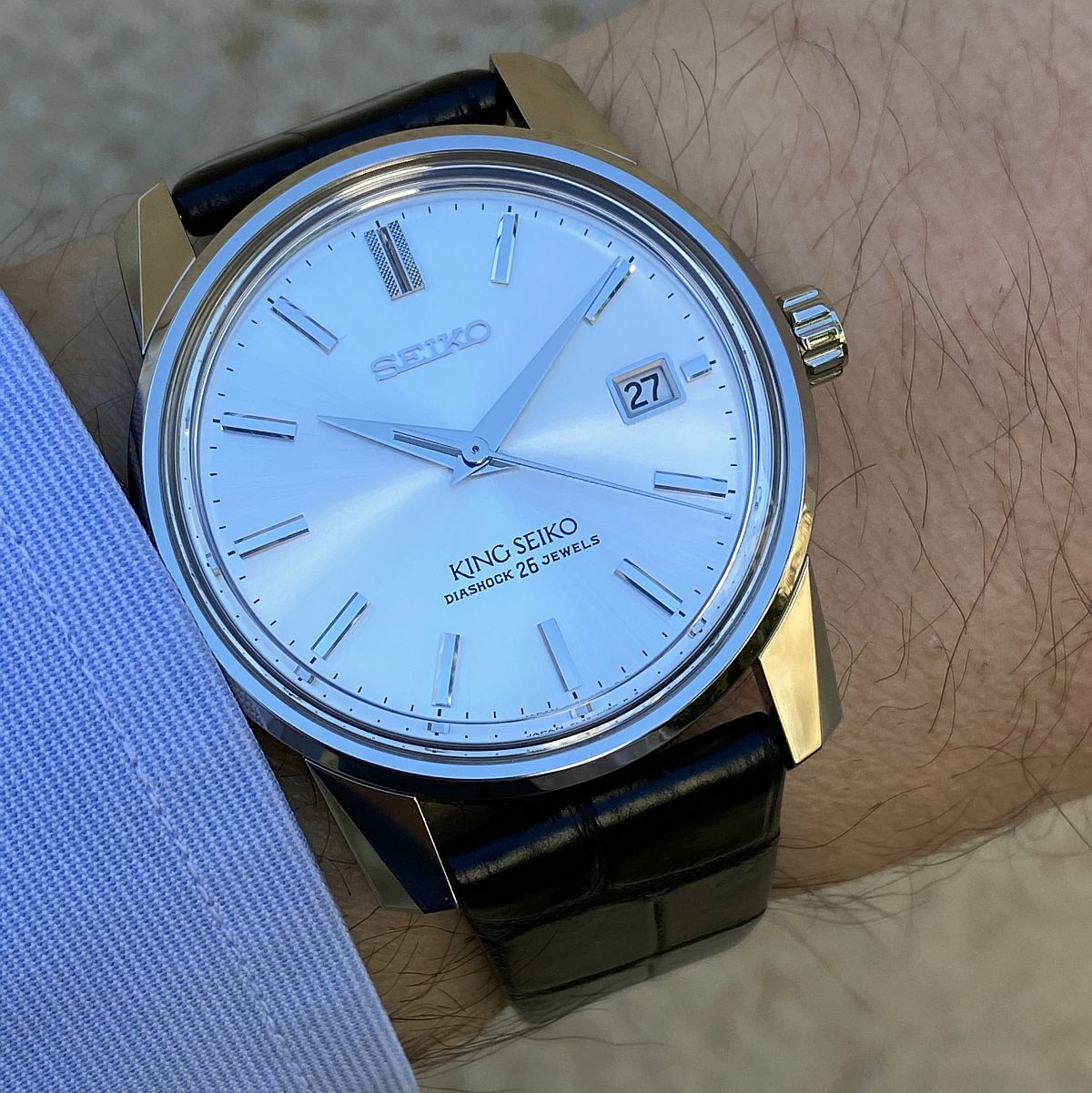 I can understand some reticence about the selling price (3,400 euros) for a watch with a movement that will end up in cheaper watches. Moreover, the limited series is relatively large (3,000 pieces). But the excellence of the execution, the quality of the packaging and the attention to detail tend to bring this piece closer to the world of Grand Seiko. At least that is the impression it gave me. The King Seiko 140th anniversary is therefore a special case in the Seiko Group's offer: it seems to be in a sort of in-between that makes it unique and interesting. And beyond these strategic considerations, it is quite simply an extremely well-made classic watch, lively and dynamic with details that give it character. 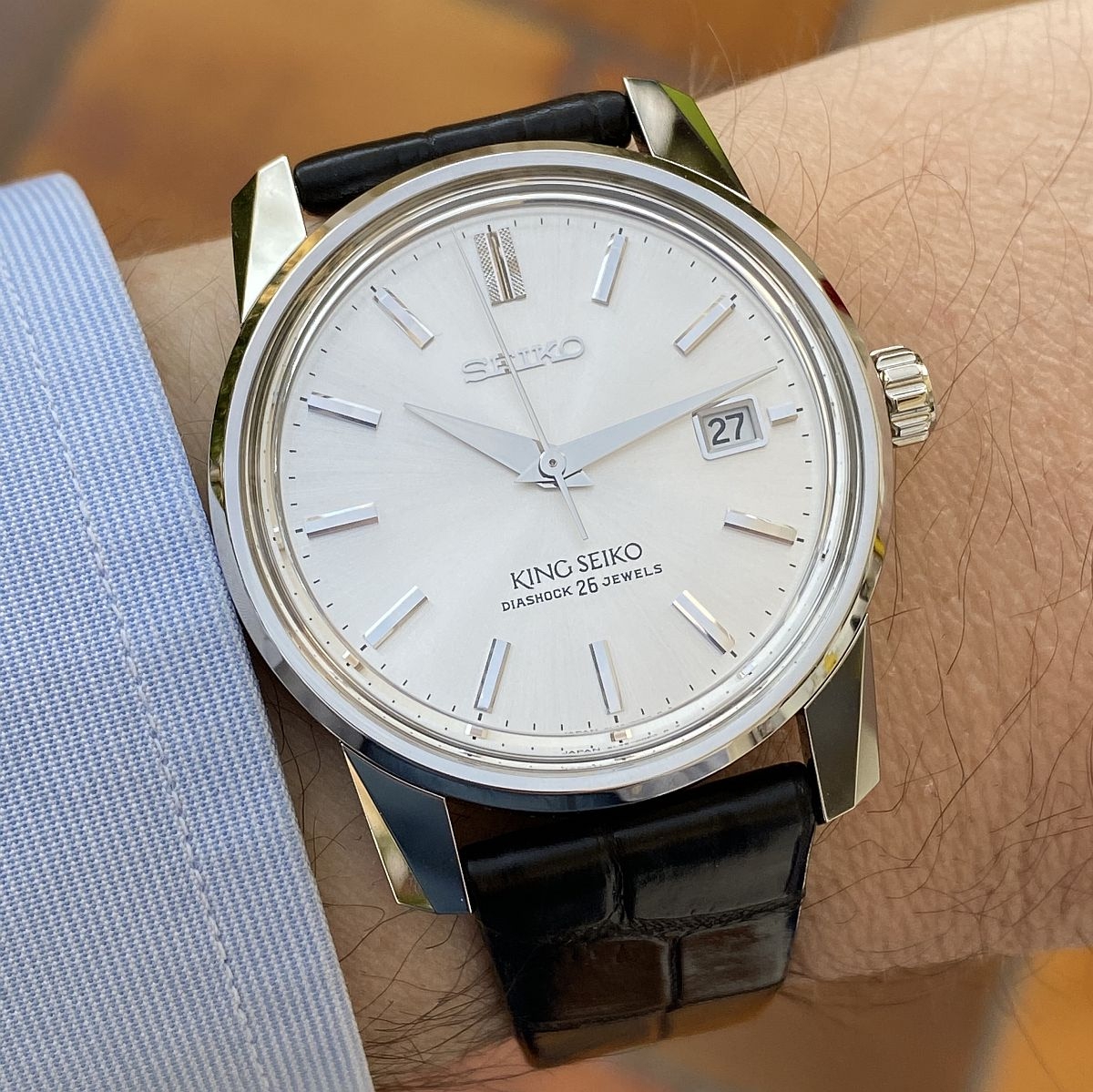 + the finishing of the case and the dial

+ the play of light brought by the lugs, the dial, the indexes, etc.

- the presence of a date window

- the accuracy range of the movement stated by Seiko is much too wide
Fr.Xavier

Hands on review with the Seiko King Seiko 140th Anniversary

By: foversta : March 1st, 2021-13:11
Seiko's history began in 1881 when Kintaro Hattori opened a watch and clock sales and repair store in Tokyo. The Japanese brand plans to celebrate this 140th anniversary with a number of limited edition watches. Among these, the reissue of the King Seiko ...
login to reply

Thank you so much for the review. All in all, it is a beautiful watch.

Thanks for your words, glad you like it ! My brother purchased it.

By: mhz > vph : March 1st, 2021-14:11
Measured and reasonable. I think too many people were too quick in writing this off as yet another failure of a reissue by seiko. It isn't perfect, but still a lovely watch. Long term though, I do think seiko needs to make more no-date, manual models in i...
login to reply

No date would have been more traditional. Uncertain..