The father of many modern Rolex watches

In 2005, Rolex celebrated the 50th anniversary of the GMT-Master by redesigning the GMT-Master II, beefing up the case considerably and introducing a ceramic bezel insert that, at first, was produced in a single color: black. The initial anniversary model was made in gold, but Rolex followed up in 2007 with the steel version we have here.

The black GMT Master II (116710LN) - a true no nonsense, no frills classic watch.. At the time of its introduction, there were many new features and upgrades including:

It's important to remember that Rolex chose to debut the Cerachrom bezel on the GMT-Master II, not the Submariner, the Sea-Dweller, or the Daytona, which all have monochromatic bezels. While this watch had indeed already had monochrome bezels from the beginning with the gold 6542, it was the two-tone Pepsi, Coke, and Root Beer variations that came to define the GMT-Master in the minds of watch collectors. With the arrival of the Cerachrom lunette noire in 2007, Rolex discontinued its Coke and Pepsi variations with aluminum inserts, and the black, Cerachrom-bezeled GMT-Master II was the only steel GMT game in town.

This is a handsome and underappreciated watch. For some reason, it was underrated during its production. It was discontinued in 2018 and is seeing a resurgence in interest as the predecessor to the newer colored variants (BLNR, BLRO, LV etc.) of the GMT. One of my favorites and happy to see it is getting some attention lately. 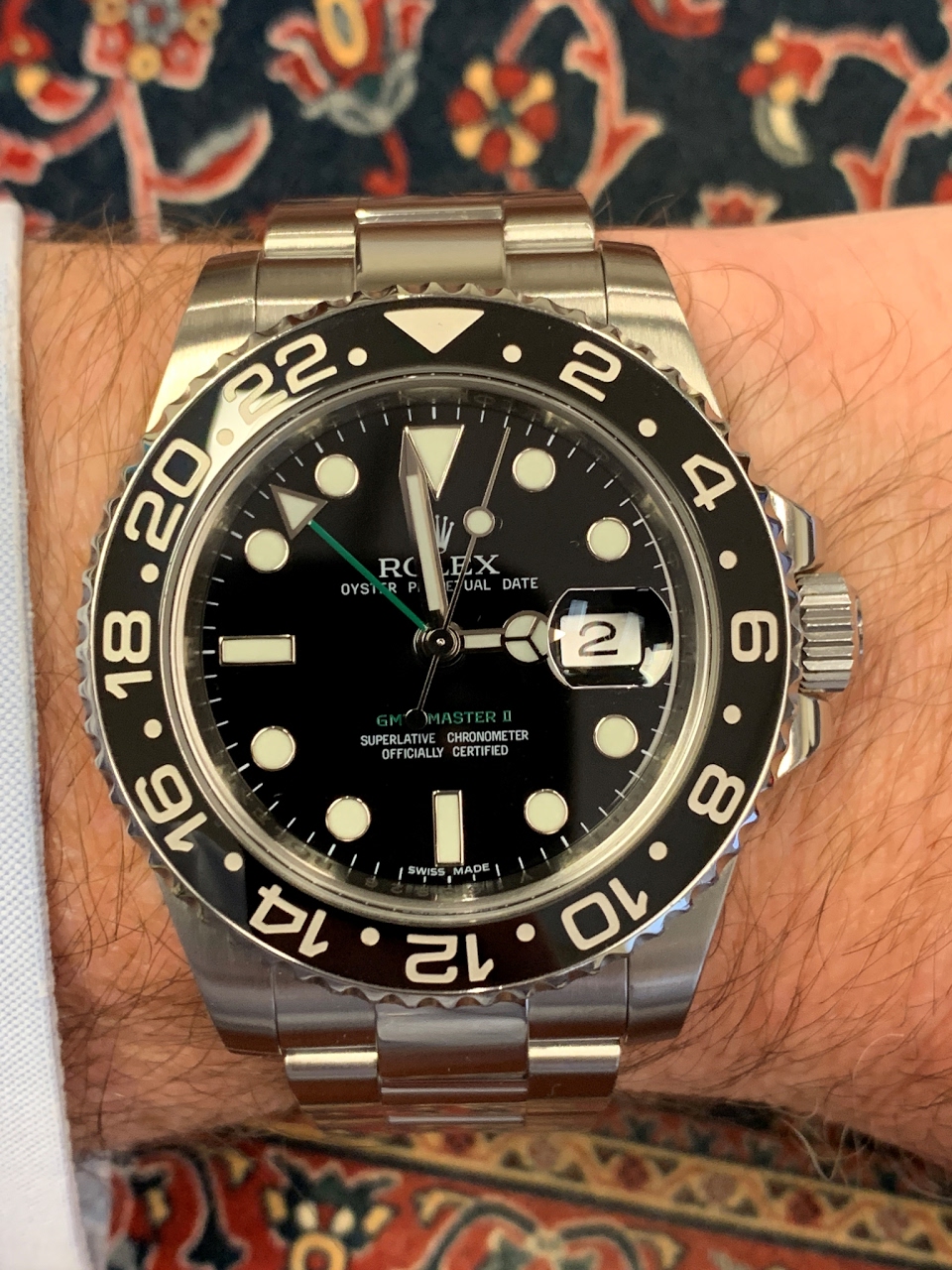 The father of many modern Rolex watches

By: CrookedOak : April 2nd, 2021-12:07
In 2005, Rolex celebrated the 50th anniversary of the GMT-Master by redesigning the GMT-Master II, beefing up the case considerably and introducing a ceramic bezel insert that, at first, was produced in a single color: black. The initial anniversary model...
login to reply

Beautiful wristshot, thanks for a nice and informative post! Enjoy.

We’re both right on this one...

I love this watch. It’s so cool. With its simple black and silver color scheme, large crown and robust case it’s basically a submariner with a GMT function. Perfect do everything, go anywhere watch

Thank you for the historical perspective ... Agree that the black bezel and dial GMT is the most under the radar for travels

I prefer the black bezel over all the others

It’s an ugly duckling... turning into a swan

This is clearly the most versatile GMT Master II

By: kennygfunk : April 4th, 2021-15:39
I’m surprised so many of the others are in so much more of demand. It’s the psychology behind it all! It’s crazy how the hulk was too edgey and now everyone is going crazy for it. People are truly followers... LOL!
login to reply

Who needs a Sub if you have this one?

By: iwolf81 : April 7th, 2021-08:02
Seriously, I have this all-black GMT version and people are always thinking it's a Sub. The GMT is also more functional than than a Sub, which I will never take deeper than a swimming pool. With those points in mind, I traded away a troublesome Kermit for...
login to reply