Aug 28, 2019,14:44 PM
The problem with the Rolex GMT-Master II Pepsi unveiled during the 2018 edition of Baselworld is that it symbolizes the speculation that surrounds virtually all professional stainless steel models from the brand with the crown. In fact, it crystallizes all the positive or negative comments, generating very excessive reactions. My purpose is not to try to explain the reasons why we are facing this situation. Is it the fault of Rolex, of the retailers, of the customers with sheep-like behavior, of the low interest rates? But does it matter after all? Because there is no getting away from it is: this watch, and the 2019 version with blue and black bezel as well are among the most sought after pieces and are therefore very difficult to get, not to mention the second hand price which is roughly twice the official price. This context generates a lot of frustration and even irritation to watches fans. 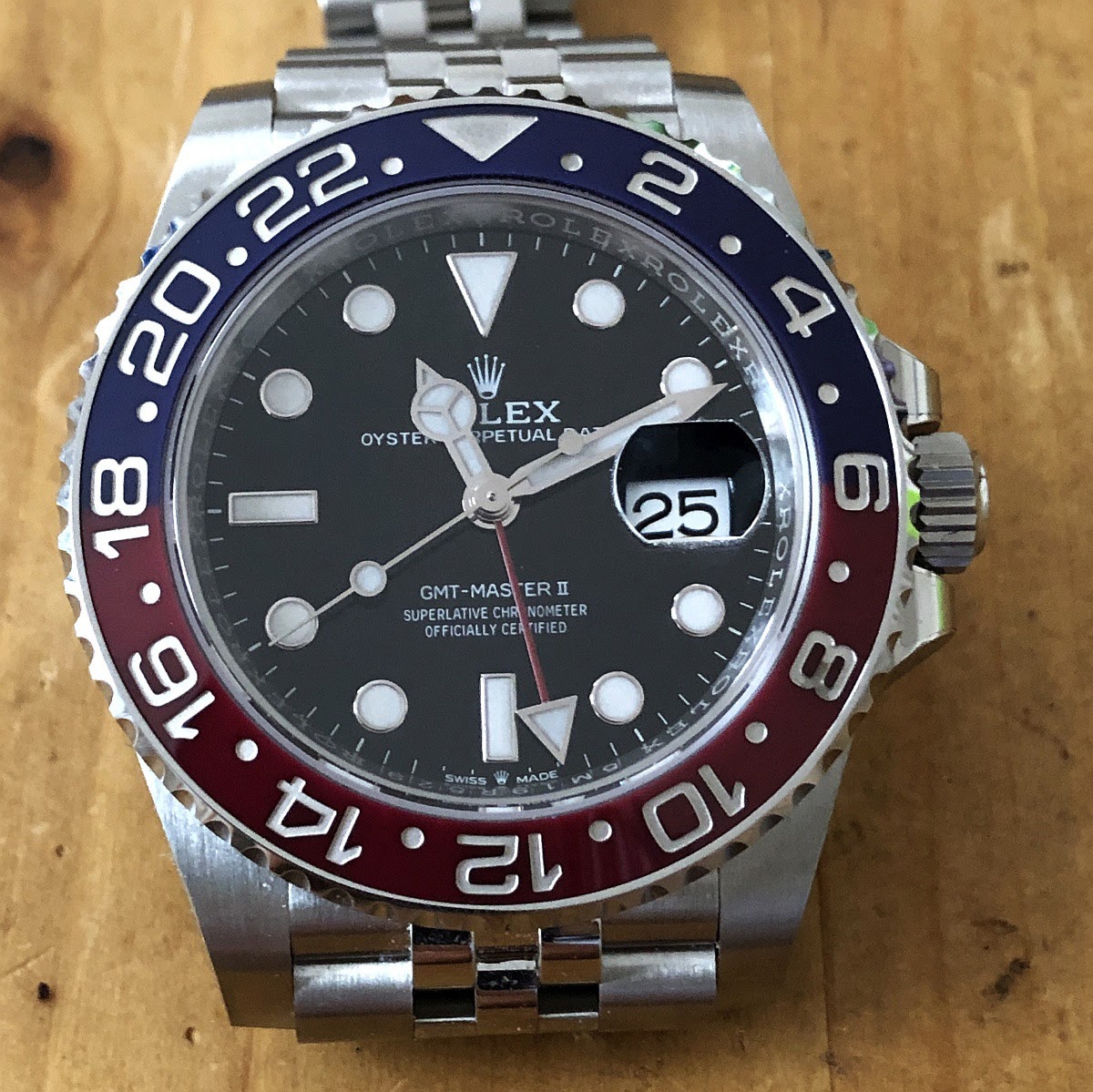 The problem is that by force, we speak more of this reference in terms of investment or availability. It is a shame because initially, it remains an excellent watch. This is the point on which I wanted to come back because sometimes I have the impression that we tend to forget it to focus on other arguments. In fact, I really like this watch for several reasons:

- first of all, I think the Jubilee bracelet suits it very well. This is not an incongruity and this come-back is, in my opinion, consistent with the more sophisticated rendering. Anyway, I always feel that it is in the context of the Datejust with fluted bezel or the GMT-Master that this bracelet is in its best place. The more complex rendering due to the five links works well with the two-tone bezel. In general, the watch appears as more refined, more opulent. I know that many people regret the fading of the utilitarian dimension of the GMT-Master II. But on the other hand, the improvement in real and perceived quality and the more elegant general style are in line with Rolex's prices, the image of the brand and its positioning. The downside in this context is the odd integration from the aesthetic point of view of the Oysterlock clasp. The latter is certainly very practical and comfortable but its size and appearance swear with the subtlety of the bracelet. it is a pity. 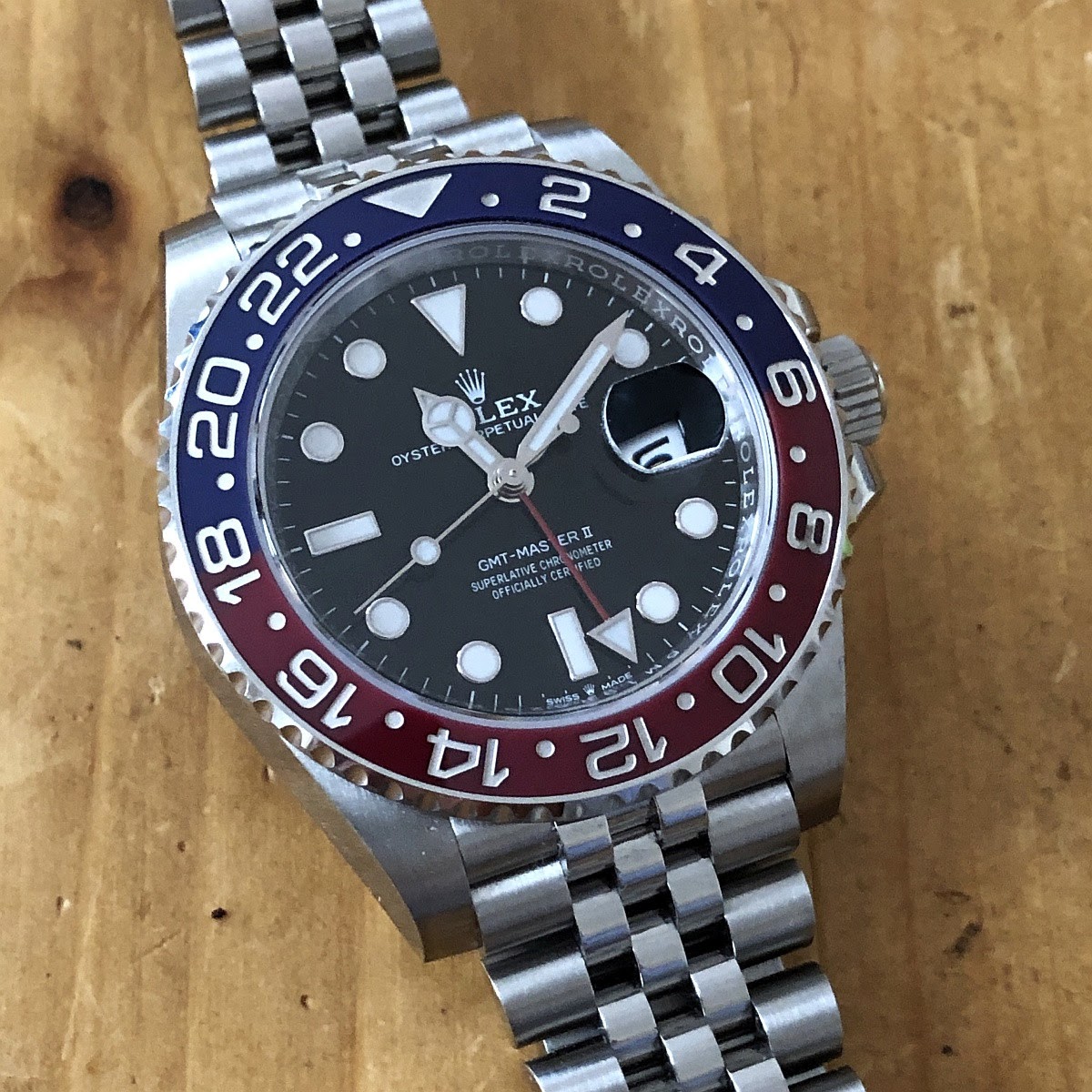 - despite this sophistication, at no time did the watch appear to me ostentatious. This is one of the frequent remarks made against it: the GMT-Master II Pepsi Jubilee is "bling". It's really not serious or the remark was made without having observed the piece closely. As previously stated, the rendering is more sophisticated and it is indisputable. The watch can attract the eye because it has recognizable elements (the links of the bracelet, the magnifying glass and the two-tone bezel) and because it is, after all, one of the best known models. But it remains a watch with a reasonable size (40mm) and a controlled thickness (12mm). The notches of the bezel are discreet and the watch can be worn under a shirt without problem. The bracelet creates beautiful reflections of lights that contribute to its elegance and certainly not to its "brilliance". There is on this subject a bad trial which is done and which doesn't correspond to the reality or at least not to my perception.

- the rendering of the two-tone ceramic bezel is varied and surprising. This is a point that I appreciate very much. Ceramics appear here as a living material. Depending on the light, the bezel may be perceived as darker or lighter. The blue can be adorned with some purple reflections in some cases. The bezel thus animates the watch nicely and can even brighten it up. 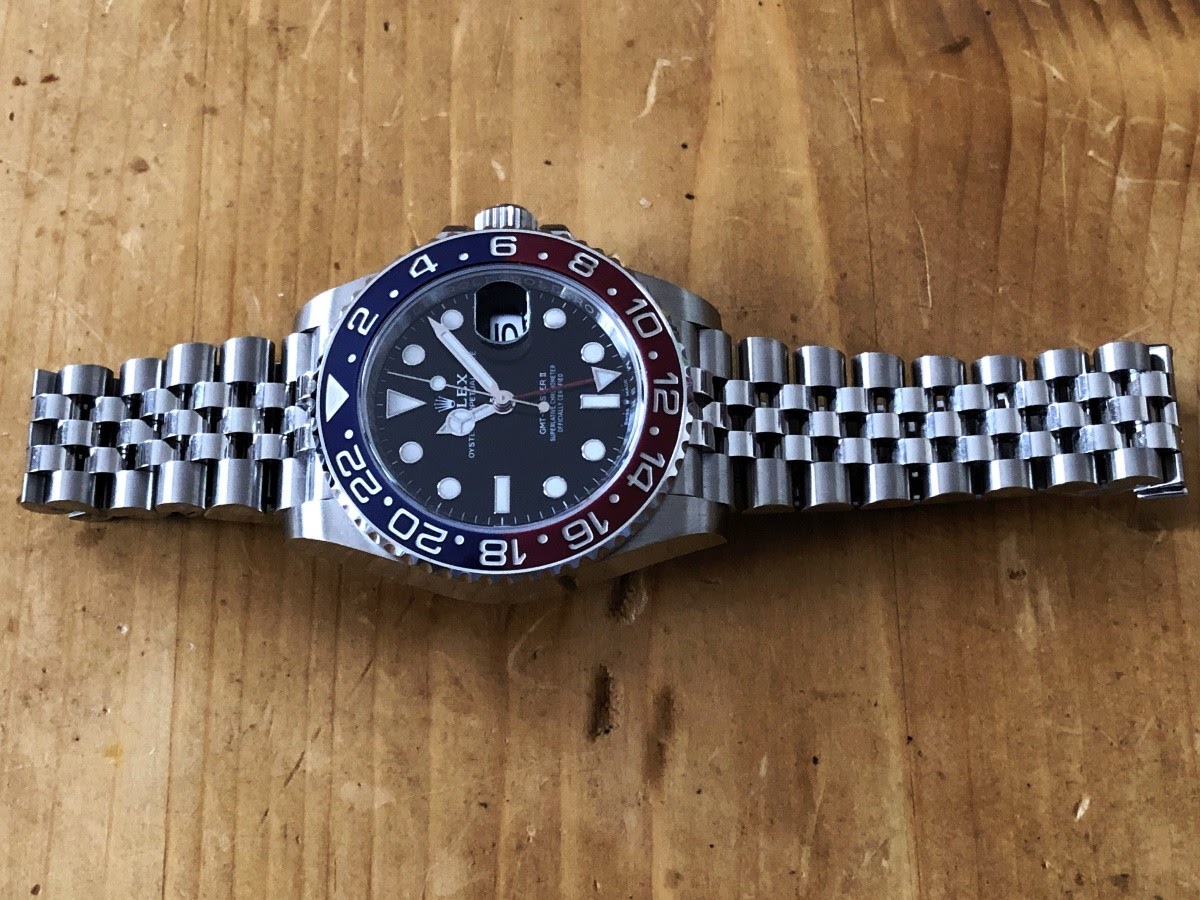 - the GMT-Master II Pepsi Jubilee is a watch that proves to be very practical on a daily use. First of all, it is worn with great comfort thanks to the bracelet and the Oysterlock clasp which features the very useful Easylink extension. The notched bezel is easy to handle which by the way allows to display a third time zone. Its versatility is confirmed by the waterproofness of 100 meters ... which is hardly surprising for a professional Rolex watch. The crown is screwed and unscrewed easily and its positions are found without any hesitation. Finally, its readability is irreproachable thanks to the contrasts between the hands, the indexes and the dial. The Chromalight display works well in the dark even though from my side I still have trouble distinguishing the triangle from the reference hours hand. But I'm afraid it's more a problem due to my own sight!

I'm not a fan of the integration of the Oysterlock clasp: 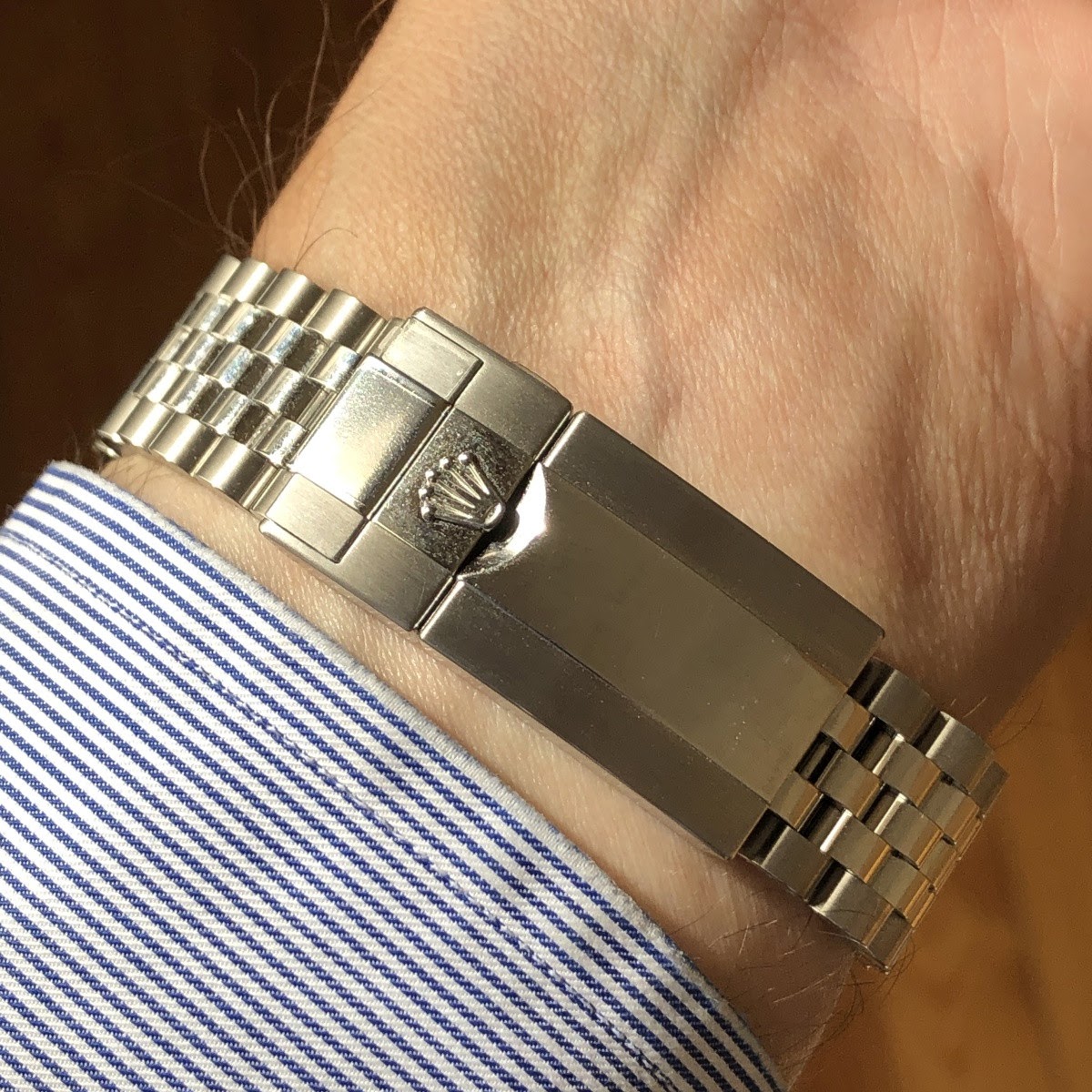 - in the end, it is the performance of the movement 3285 that makes the success of the GMT-Master II Pepsi Jubilee. The movement is easy to use thanks to an independent local hours hand that can be adjusted forwards or backwards with one hour increments. We just need when arriving at destination to move this hand thanks to the crown in the proper position, the reference hours hand obviously remaining still during this manipulation. Being a new generation movement, it incorporates the latest developments from Rolex (like the Chronergy escapement) and it offers a power reserve of 70 hours (for a 4hz frequency) which is significant. The caliber 3285 is obviously certified superlative chronometer allowing it to respect a range of precision more demanding than the COSC one of -2 / + 2 seconds per day. Simple to use, reliable and precise, this movement offers a lot of pleasure and above all builds the confidence on which the watch is based.

This photo illustrates the change of intensity of the colors of the bezel according to the light: 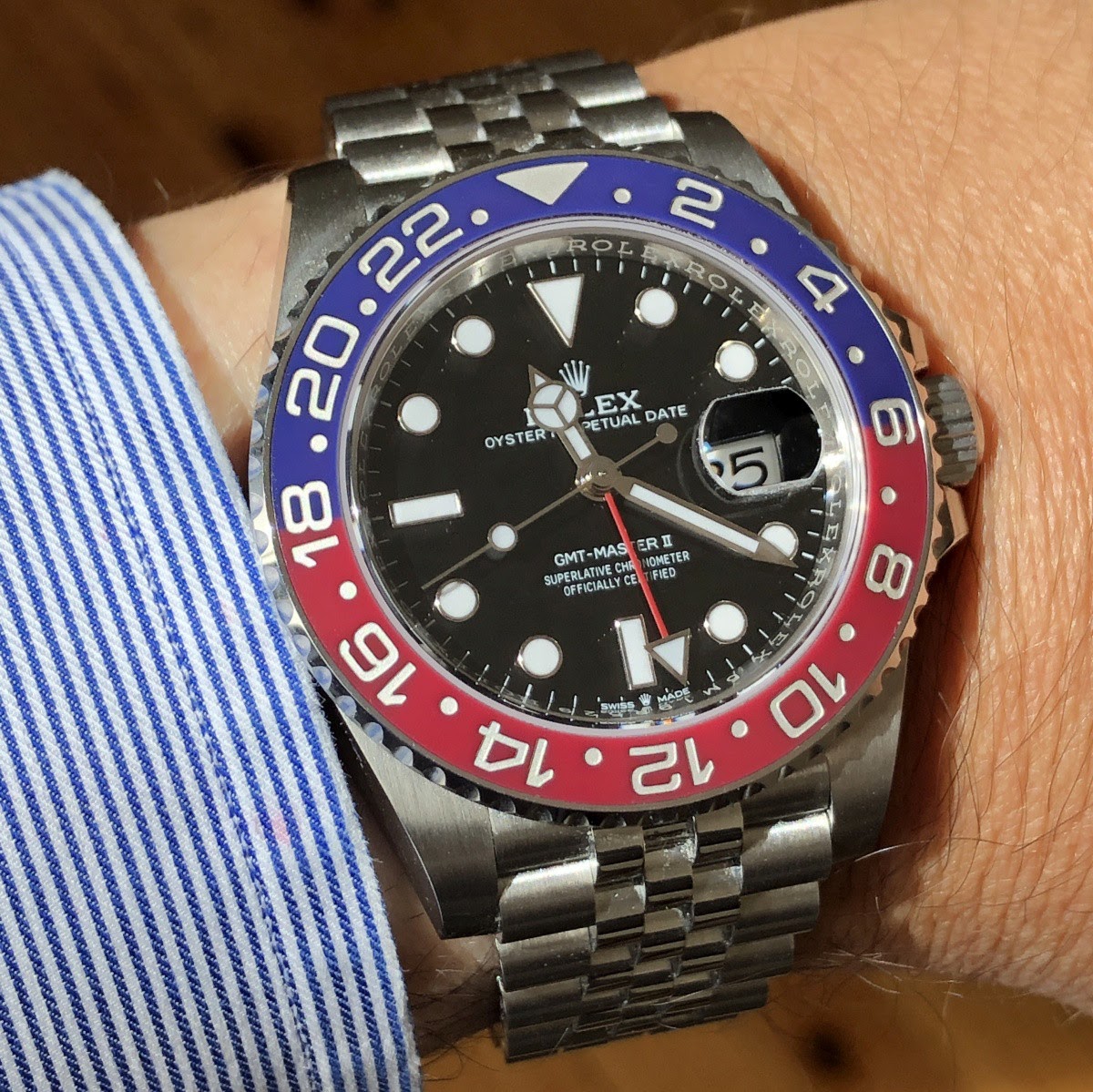 The points I put forward here above are not surprising. They are even well known to everyone. But considering the particular context in which is the GMT-Master II Pepsi Jubilee (or its little sister the Batman), I wished to remind its intrinsic qualities. I am well aware that this will not appease, on the contrary, the frustration of the Rolex fans and lovers who want to purchase the watch at the retail price and who see significant volumes sold by second-hand dealers at delusional prices. But at least, putting a bit of watchmaking ingredient around doesn't hurt. Sometimes, I have the impression to read The Financial Times by browsing articles and discussions on the GMT-Master II Pepsi Jubilee. And we have reached a point where this atmosphere has become heavy and tiring. 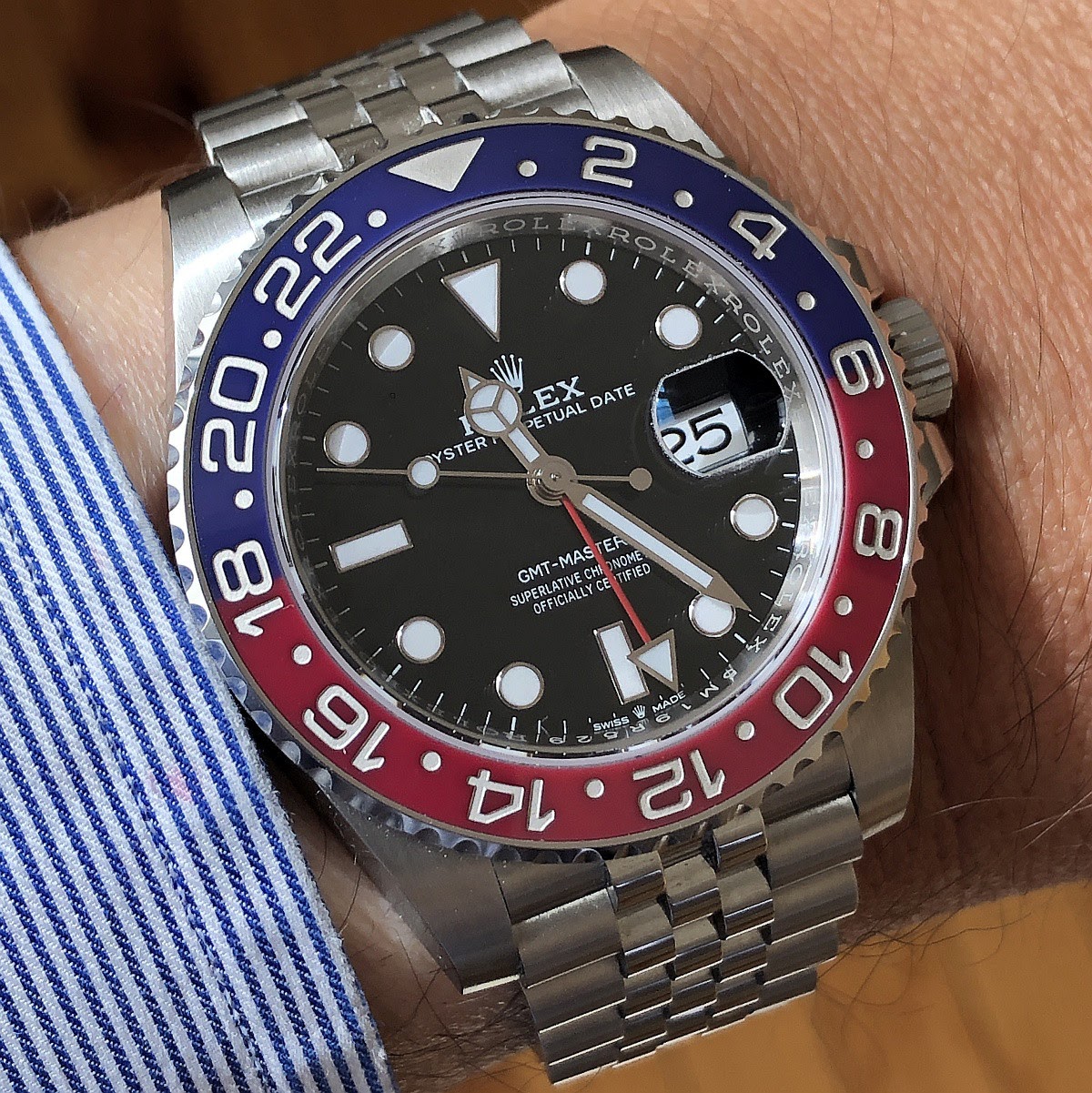 Cons:
- the aesthetic integration of the Oysterlock clasp that is not compatible with the overall elegance of the watch
Fr.Xavier

By: foversta : August 28th, 2019-14:44
The problem with the Rolex GMT-Master II Pepsi unveiled during the 2018 edition of Baselworld is that it symbolizes the speculation that surrounds virtually all professional stainless steel models from the brand with the crown. In fact, it crystallizes al...
login to reply

Thanks for the review, Fx. I think it is a great watch to have, even if I am not fan of the Jubilée bracelet. [nt]

Worthy of a good review...

By: Cpt Scarlet : August 28th, 2019-15:24
I find it good on the wrist, the Jubilee bracelet is superbly designed and constructed, as is the rest of the watch. I’ve decided it’s a keeper, but then that’s what I always decide ;-)) ...
login to reply

In regards to the bezel

By: thegrailwatch : August 28th, 2019-15:30
Thank you for the great are photos on Instagram of two Pepsi GMTs with Jubilee bracelets side-by-side, one with a bezel much darker blue than the other. It wasn't a matter of lighting, more the outcome of color of that particular execution. Perhaps anoth...
login to reply

In person the watch is amazing. I think Rolex really nailed the aesthetics

By: emcquillan : August 28th, 2019-15:57
Jubilee bracelet or not the colour of the bezel and dusk is much more subtle and elegant in person. Great review Fx.
login to reply

Thanks for this review. I find what you say about the change in color of the bezel very interesting

By: descartes1 : August 28th, 2019-16:58
I recently acquired the LN and it shares the same phenomenon. In certain lights the black bezel looks gray/faded and has a very similar look to a vintage Rolex with faded bezel, which I really like. It is hard to capture in photographs.
login to reply

I have the same watch

By: dr.kol : August 29th, 2019-00:31
and before that owned a ceramic GMT with Oyster bracelet. I think Jubilee bracelet is spot on. It is much more comfortable in this watch than Oyster. I like this new Pepsi a lot. Thanks for a great review. Kari
login to reply

By: COUNT DE MONET : August 29th, 2019-00:40
Thank you for this comprehensive review. I see nearly almost in every picture on the net this watch worn with a long sleeve shirt. That does not mean it is a bad watch, quite contraire: would love to own one too. However, I would not like to wear it like ...
login to reply

That’s the issue for sure [nt]

Great watch although the Jubilée bracelet is not really for me.

Great review! I do enjoy mine

Thanks for the nice wristshot! [nt]

A great review. Many thanks. [nt]