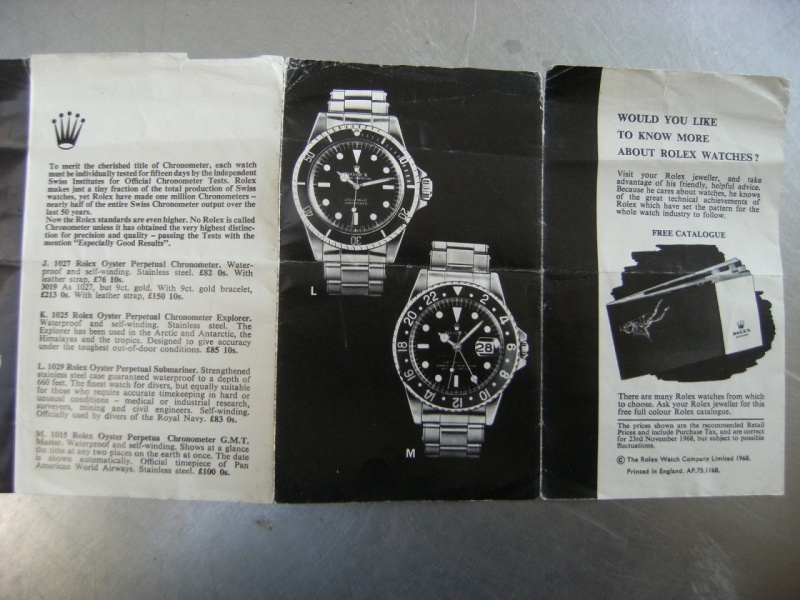 A Reference post I will save with your permission, Bill.

By: amanico : March 10th, 2013-23:33
You wrote it very well. Inserts may look futile, but like a good piece of Art, the devil is n the details. And a Vintage Rolex needs its own insert. If you add the patina to the graphics, a nice and correct insert is not tha futile. We are two damned soul...
login to reply

Every piece of art needs a frame

Pearls are a little more simple

By: Bill : March 11th, 2013-09:06
Just a question of tint but so many are refilled and you can't tell. Tricky stuff but not one I attach much importance to draw concern. Best Bill
login to reply

By: i_am_Sam : March 11th, 2013-07:40
Thank you for sharing your extensive knowledge about the submariner inserts... I certainly learned a lot from your post but definitely still need to learn more.. So much to learn about Vintage Rolex Thanks again for sharing... Best, Sam
login to reply

By: Suboc : March 11th, 2013-07:50
Excellent post. Here is a "Skinny 4" similar to one in the center of the third to last photo of inserts you show. Notice how the numbers and hash marks are pulled to the outter edge of the insert, as well as the skinny 4. I have been told these were produ...
login to reply

I have observed the insert in question

By: Bill : March 11th, 2013-08:52
To me the one mounted on the watch is due to a error in the printing. The position was too close and the paint is actually visible on the outer edges of the insert. The format of the printing is consistent with the early fat font series. The fonts of the ...
login to reply

Here are some better images of the insert in question

By: Suboc : March 11th, 2013-09:46
Thanks Bill. There are certainly a number of other inserts, and figuring out how they fit into the chronology is a little confusing. I believe this insert is correct however not sure what period its from. I appologise for redirecting this thread from Mark...
login to reply

I think it is safe to say based on the 5

Your insert is worth a deeper review.

By: Bill : March 11th, 2013-11:16
I will see what I can come up with and as you pointed out to me you may be on to a new classification "Slim 4". I need to do some review at my end but all comments are welcome. Best Bill
login to reply

By: Bill : March 11th, 2013-13:39
But 1968 is a bit later than the examples put forward as "Slim4" which had been associated with 1963. Looks like we need to do some more work on the slim 4 qualifications. The two ads below have that format but these don't fit the time period with the dia...
login to reply

By: Bill : March 13th, 2013-21:27
It is impossible to tell but if we assume it is gilt and we look at the shape of the coronet it looks more like a Bart than 67-68 meters first because the coronet is not short and stout but skinny and tall. But if you observe the position of the FT on a b...
login to reply

The art of Rolex

By: Bill : March 15th, 2013-08:16
As you noted so much details so much history in the details. You never stop learning at Rolex school of hard knocks. Best Bill
login to reply

By: Suboc : March 13th, 2013-23:00
On the matt dialed watch seems more centered under the crown than does the L in the add which looks set to the left. Could just be the photo.
login to reply

Super hard to tell for sure.

By: Bill : March 13th, 2013-23:03
This is a tough one. Unless we can confirm the date stamp on the ad we are still guessing. We also don't know if Rolex used old photos in new ads. Could be. And there is no way to really tell if the dial is gilt or matt. Actually in your first ad it does ...
login to reply

By: Bill : March 11th, 2013-13:51
It looks like a NOS bezel which is pretty rare but always a possibility and you look to be the lucky owner. Bill
login to reply

Another look at the "Slim 4" Rolex insert MK3/4

Hello Bill! Thank you so much for this most interesting...

By: Subexplorer : March 14th, 2013-06:51
... and informative post. Will keep as a fantastic reference source! Enjoyed very much reading and looking at these photographs! Receive my best cordial regards, Abel.
login to reply

By: Suboc : March 14th, 2013-07:33
Everyone agrees "Skinny 4" is an early version around 63 and then those later adds show what seems to be the same insert. My bet is that the adds back then weren't always accurate reflecting the exact dial/insert version being sold in a given year. Perhap...
login to reply

GReat ads none appear to support the slim 4

Looks like a very nice 5513 - It looks like a maxi dial where the lume plots are almost touching the index markers.

By: Bill : January 30th, 2018-19:22
On the insert it looks like it may be an original Rolex service insert but I could be wrong. Bill
login to reply

Absolutely changes the face like a picture frame. Always better to have the period correct insert. [nt]

I'll do that, Thanks!

What a fantastic research and effort you have presented us, Bill!

By: AlexSunrise : May 4th, 2020-09:53
Chapeau! I have a question pertaining the 1680/8 bezels... Is there any guidelines as to which years came with silver print and which ones came with gold print numerals? Wishing you all the best, Alex
login to reply

That is a tough one.

By: Bill : May 4th, 2020-10:21
If i was going to guess i would say the early 1680/8 meters first would be a candidate but that just means it could share the same black and silver bezel which standard to steel models. But as a rule i think they all have gold print if they are a gold wat...
login to reply

By: dazza1210s : March 16th, 2021-09:32
Afternoon Bill/Everyone Im so glad I found this thread! I have a 5513 Sub year 1968. Long story but sent the watch to a highly incompetent watch maker for a service and the watch was returned to me with the bezel and insert badly damaged/butchered. As you...
login to reply