Well, you certainly have my vote,

Thanks for a wonderful writeup of this unique and beautiful watch!  I found my example in mid-2001, when it was not so old.  My source was a commercial reseller who offered almost no
information in response to the many questions I posed before purchase, a situation which became understandable
later when I tried to research the piece on my own.In the end, I bought the watch despite my ignorance, for simple sheer beauty.  A few months later I ran into Mike Margolis (now president of Girard-Perregaux USA) at a watch get-together, and
he kindly referred my questions to the representative from Helvetia Time, the (then?) US distributor.  I received
the following email in reply:

Dear Gurevitz,
Our head watchmaker has advised me that your watch has a movement from
Tavannes Watch Co. of La Chaux de Fonds, caliber 507.  This caliber was
originally a pocket watch movement designed for a Hunter case.  circa
1940's.
We hope to have served you with this information.
Best regards,
Joan
Besides being a bit of curious history, I mention this because as I am sure you know, there were just scads of
variations on this basic Tavannes movement, and while the one you show from my Cyma WWW is close, you might
notice some distinctions, specifically in the barrel bridge.  Besides the screw placement you mention, the click is
positioned on the other side of the barrel, and the edge facing the rest of the gear train and the balance is cut away a
bit more.

A comparison with the Tavannes Cal. 586 variation below I think will illustrate: 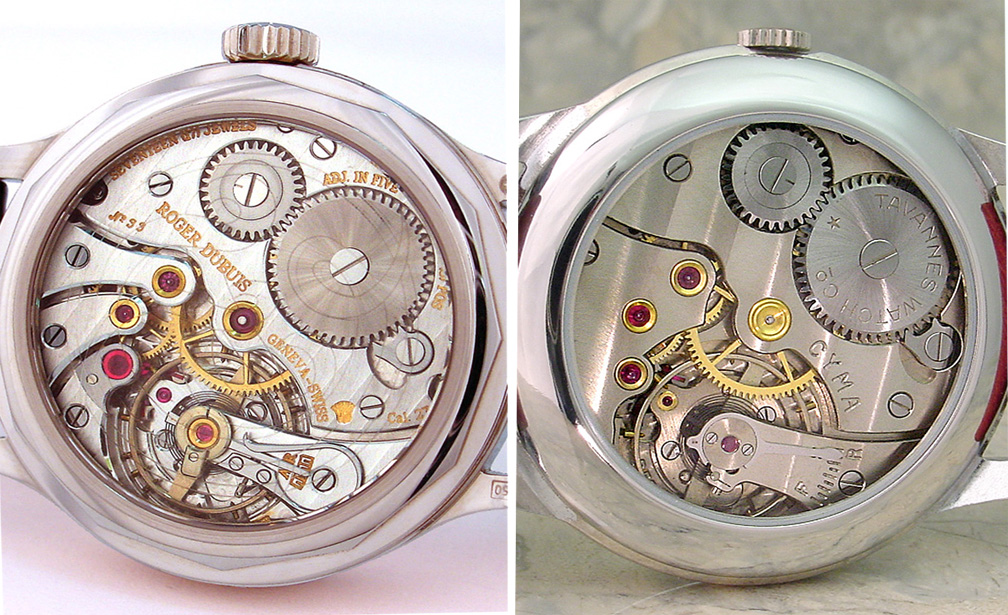 Thanks also for pointing out RD's personal role as regulateur,  I rechecked my paperwork and am delighted to find
the same!

Finally, regarding those hands, they are indeed difficult to capture, but here is an attempt from a while ago: 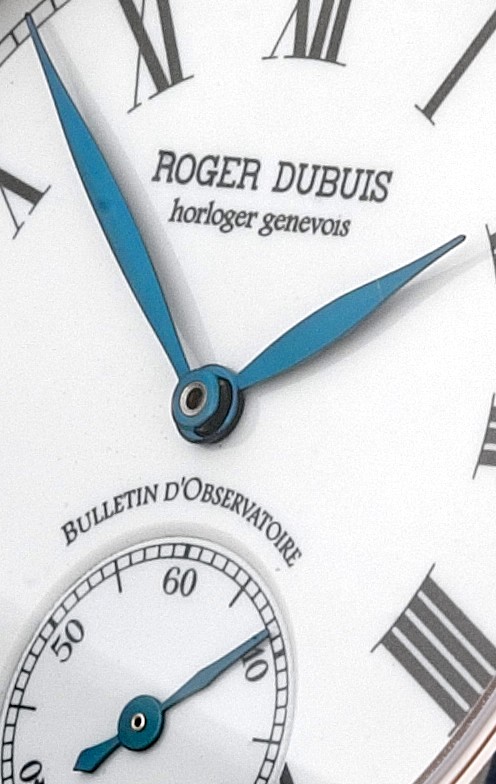 By: Ornatus-Mundi : March 25th, 2013-05:44
It is with great pleasure (and thanks to the Gentleman owner) that I am able to present to you a watch that has acquired a cult status amongst watch connoisseurs worldwide - regardless of their respective brand inclination. I am speaking about the Roger D...
login to reply

My eternal love as well....

The man was at his best.

By: fernando : March 28th, 2013-07:11
A classic that is very pleasing and easy to fall for. I am for one smitten with this watch. Thanks for sharing it with us. cheers fernando
login to reply

Well, you certainly have my vote,

By: SteveG : March 28th, 2013-09:34
Thanks for a wonderful writeup of this unique and beautiful watch! I found my example in mid-2001, when it was not so old. My source was a commercial reseller who offered almost no information in response to the many questions I posed before purchase, a s...
login to reply

I thought it was good, because I wanted

By: SteveG : March 28th, 2013-12:38
to find a watch which used the base movement which RD thought was worthy of his extreme efforts. In this case I can't see clear evidence that that particular bridge was replaced, but it does not matter to the function, and it is still plated brass and bea...
login to reply

The Hommage line was so pure, so beautiful, this Condottieri...

By: Sandgroper : March 31st, 2013-05:22
is a prefect example of something very classy, very homogenous, very horological and at the same time departing from the constraints of the Big 3 or whatever. I feel, of course this is my own opinion, that the new tack Roger Dubuis has taken, is following...
login to reply

Thanks for the wonderful write up. The Condottieri is one of my favorites in my........

By: Mel : March 31st, 2013-17:48
collection and I feel fortunate to have been able to attain one of my grail watches. It's truly a unique watch and I love to wear it. I wish they would return to the classic designs that they were so loved for in the beginning..........but, on the other h...
login to reply

By: Ornatus-Mundi : April 4th, 2013-03:49
may I ask you to post some close-up from the hands and the dial? And a wristshot perhaps? As your desire for more classic watches I assume I have good news. The Hommage collection has recently received more attention. So I expect we see increasingly tempt...
login to reply

Thanks Magnus. That's encouraging news about the Hommage.

By: Mel : April 5th, 2013-17:49
I certainly hope it results in a return, at least on some level, to classic, timeless designs. Here are a few more pictures that I took some time ago. I don't have any recent photos but I plan on taking new pictures of all my watches. The RD's will be at ...
login to reply

By: Ornatus-Mundi : April 8th, 2013-00:22
of an outstanding watch. I really like how you captured the subtle layers of the dial and its surface structure. And of course, I adore the movement pic. I can't wait to see more! Have a nice week, Magnus P.S.: One question: how does it sound ?
login to reply

By: Mel : April 10th, 2013-18:57
It's not loud but it is louder than most watches I have. I have to hold it within a few inches of my ear to hear it ticking. It's not loud but it has a very solid tic toc. It winds loud though. Not silent and smooth like most modern high end watches. I lo...
login to reply

By: Mel : April 15th, 2013-07:15
the sound is coming from the pawl that you can see on the wheel but it's also loud in the other direction as well. It sounds almost pocket watch loud, which may be apropos. When I say loud, I mean you can hold it at arms length and definitely hear that pa...
login to reply

By: Jeremy Wang : February 5th, 2019-08:49
thank you for this useful information which l have been searching for years for zi also have this watch for over 20 years. And my certifacate shows that this Roger Dubuis watch that I own is a unique which means it only produced one piece. ...
login to reply