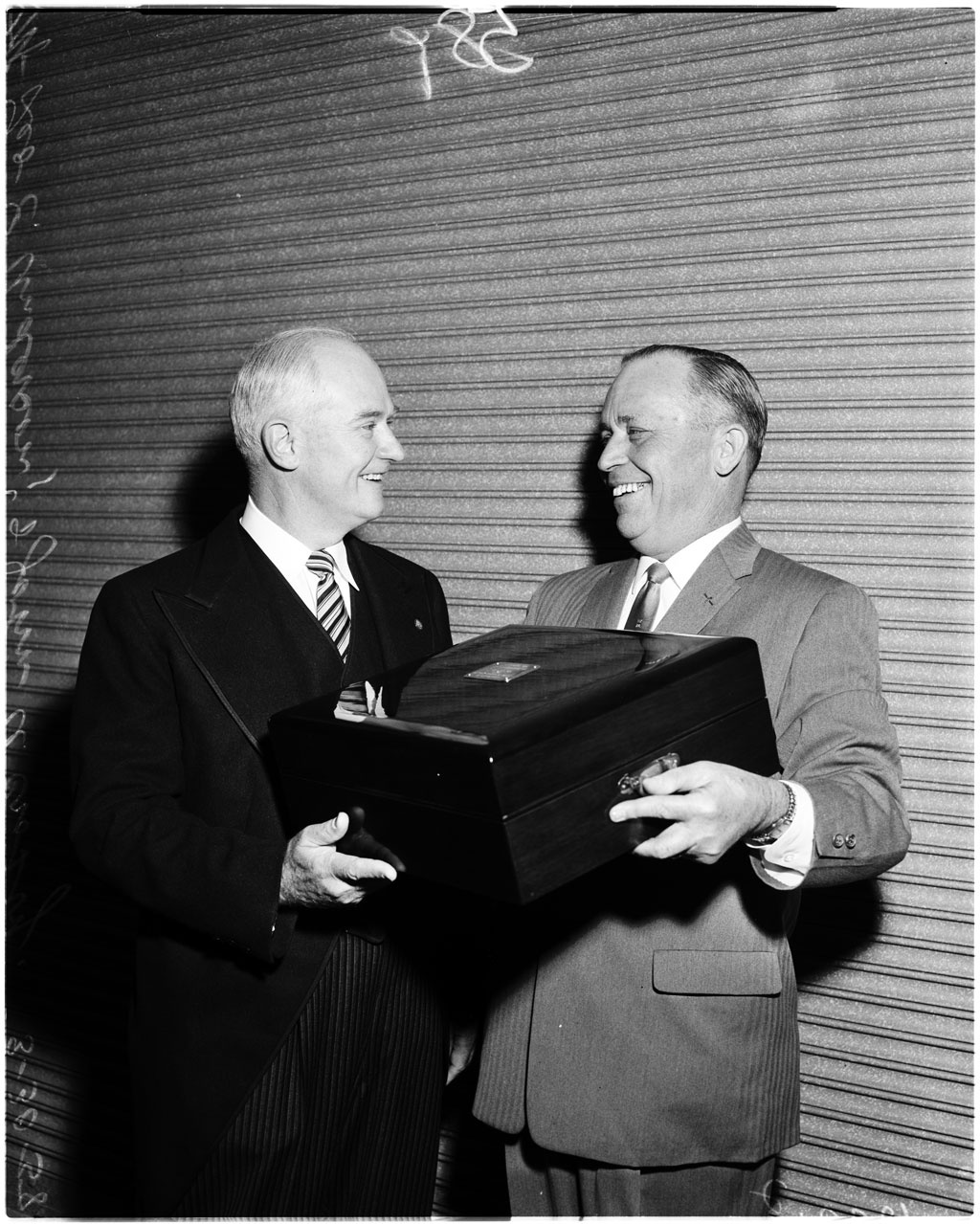 I met him, once.  And therein lies a tale.

It was in the early fall of 1985, downtown Los Angeles.  It may well have been a Thursday, as that was when the Original Pantry . . . 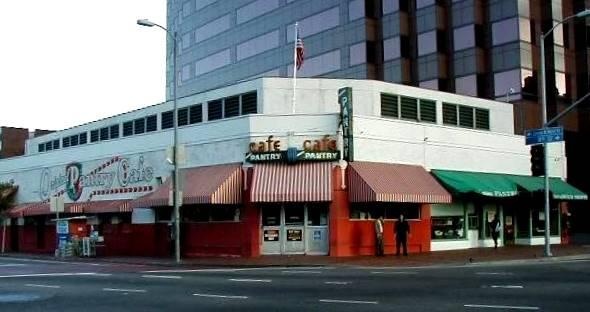 . . . served corned beef and cabbage, a favorite in those days.  I found a seat at the end of the counter, and after ordering lunch, opened my copy of Robert Caro's Path to Power, the exhaustive first installment of his biography of Lyndon Johnson.  Shortly afterward, a man walked in and pulled up the next seat.  He was an older gentleman but vigorous, and carried himself erectly without a hint of his age, which I guessed to be in his seventies.

I don't remember how the conversation started, but it was over current affairs, and distinctly remember discussing either Vatican or Papal developments then consuming the headlines.  As we were winding down our meals, the conversation took an unexpected turn.  He asked if I was familiar with Freemasonry, and pleasantly surprised by my unusually well-informed reply; as a history buff, I'd made a connection between The Craft and several critical events, which apparently pleased him to no end.  He then asked if I was interested in learning more about the fraternity, to which I expressed surprise - we had just met in a café, after all.  His reply was telling: after noticing my choice of reading material and as a result of our conversation, he felt comfortable raising the topic, and asked for my address, which I gave.

A week later, a letter came in the mail.  It was from the gentleman I'd shared a meal with, and typed on letterhead from a business firm (or, so I assumed at the time).  The text of the letter was an invitation to a casual meeting at a lodge somewhere in Los Angeles.  As it happened, though, I was just about to leave LA for an extended trip overseas, and never replied; it would've been awkward to accept his invitation but then decline any further involvement.  After returning from overseas a year later, I recall looking over the letter again, but then tossing it out as it would've been equally awkward to contact him after a years absence.

The years passed, and the incident became nothing but a distant memory.

Fast-forward to February, 2011.  I happened to be in a part of Los Angeles that I hadn't visited in decades, the city of Whittier.  It so happened that I had a bit of free time on my hands, and while driving along Whittier Boulevard, passed by a pawn shop.  Now, I must've driven past a thousand such places over the years, but this one inexplicably beckoned.  After dropping off my lady friend at her appointment, I returned to the pawn shop, and walked in.  The story was told on our Omega forum . . .

. . . back in April of that year.  What I didn't share, though, was the inscription on the back. 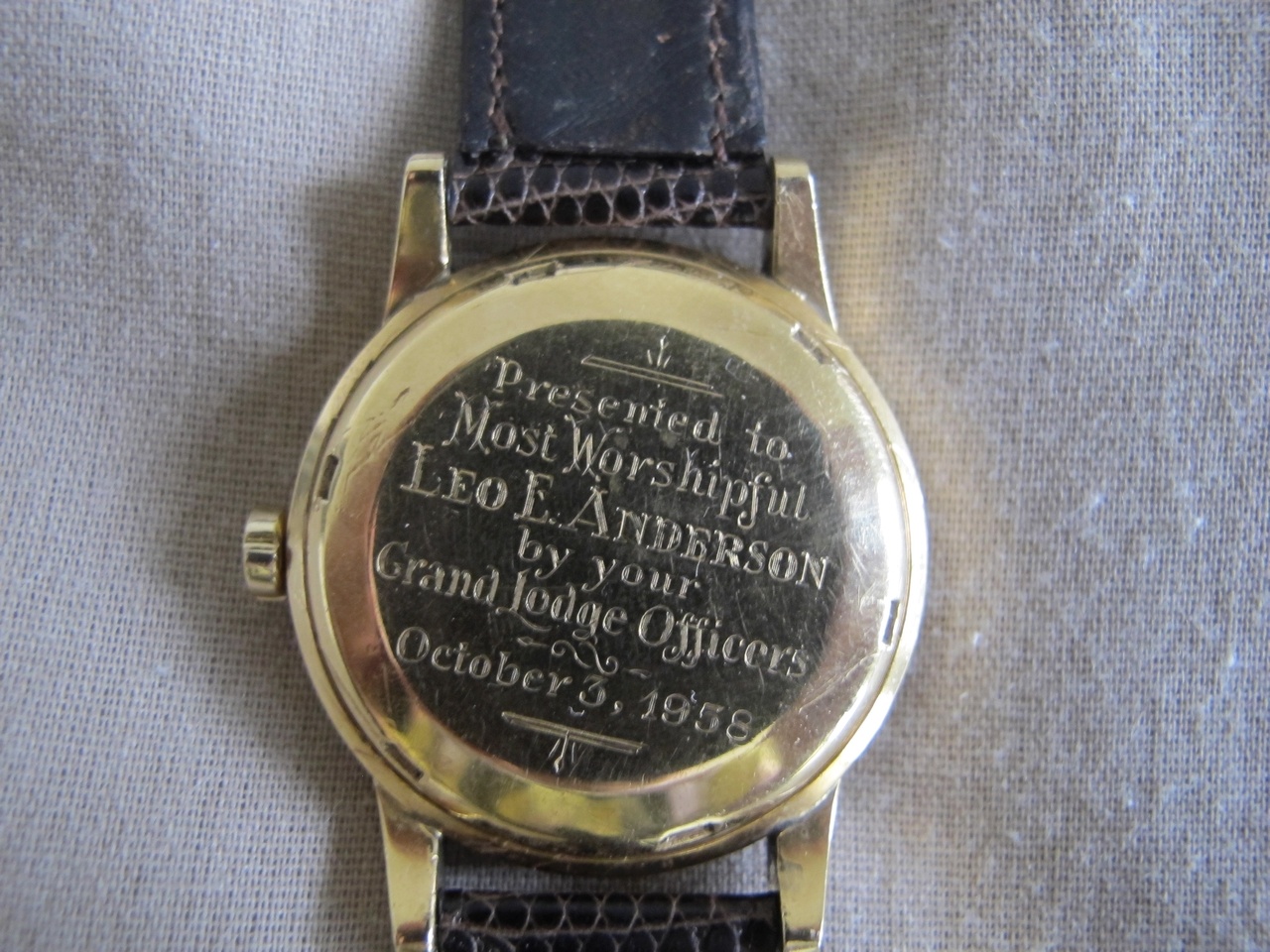 I understood the significance of the engraving.  This watch had been presented to the Worshipful Master of a State Lodge for completing a year of service as Grand Master of that State's Masonic Lodge.  No mention of the State, though, and the name Leo E Anderson meant nothing to me at the time.

A year later, on a Saturday afternoon in February, 2012, I again had a bit of free time on my hands, and the Seamaster was on my wrist that week.  Just out of curiosity, I decided to search online for information on Leo.  The first inquiry brought up an obituary . . .

. . . from the Los Angeles Times.  There were many clues in the obit that lead to further discoveries, including legal briefs he'd written and are now part of the curriculum in California law schools.  The tastiest tidbit, though, was the name of the law firm he represented, Meserve, Mumper, and Hughes.  I plugged the name of the law firm into Google search and came up with their website, which had their address in downtown Los Angeles.

Not ten minutes walking distance from the Original Pantry.

For the first time in decades, memories of the meeting with the old gentleman came flooding back.  His name was Leo - that much I clearly remembered.  Could this possibly be the same man?  The meeting place, his age (he would've been 83 at the time), name, and the subject of our conversation all matched.  Feverishly, I looked thru reams of entries, until discovering the photo posted above, from the University of Southern California archives.

It was the very same man.  Younger in the photo than when I met him, of course, but the visage and profile were identical.  A watch is apparent, but unfortunately, the date of the photo is March, 1958, and the Seamaster would've been awarded at the Grand Lodge meeting in October of that year, so it's not the same Seamaster on his wrist.  Still, the sheer magnitude of the coincidence was, to say the least, utterly fantastic.  What are the odds of having a chance meeting with a complete stranger, and then coming face to face with him a quarter of a century later with his watch on your wrist?

Mechanical watches occupy a unique place in our lives.  They are objects, to be sure - not flesh and blood, not animate.  Unlike any other material object, though, they convey a sense of time.  Time: universal, practically undefinable, yet ever present.  Nothing seems to carry the memories of the past more deeply than a watch, pocket or wrist.  We remember our fathers and grandfathers by them.  Chances are that a watch was a gift that marked a rite of passage.  It may have been only a gift at the time, but means so much more as the years go by, and even more when the person who granted the gift passes on.  A watch is not just a machine that tells time; it is a repository - of memory, of fondness, of ourselves.

That box found in the attic is not just a collection of antique artifacts.  It is - as much as an inanimate object can be - living history.

The Piaget family must be immensely proud of, and touched by, the discovery.

PIAGET: Beneath the Surface of an Integrated Manufacture

By: MTF : April 11th, 2013-09:59
Piaget: Beneath the Surface of an Integrated Manufacture Regular followers of this forum will be familiar with the origins of the Piaget family and Manufacture. Click URL that follows for the History: We have often seen old photos of the Manufacture at L...
login to reply

History is important for any brand

By: AnthonyTsai : April 11th, 2013-12:08
With no history or story to tell, it will not survive. This old cardboard box represents the Piaget spirit in all its essence, and the worker who found it must have been thrilled. It's like a me climbing up to my attic and finding an old lost box filled w...
login to reply

At least I am not alone in thinking about HYPE

By: MTF : April 12th, 2013-01:51
Thanks Anthony. Sometimes we get comments from other brands ( NOT Piaget that still has an archivist and really old ex-employees living next door to the factory). One Brand XYZ executive said to me: "Forget talking about our vintage watches; we don't sell...
login to reply

By: mkt33 : April 12th, 2013-16:35
"Forget talking about our vintage watches; we don't sell vintage watches. Tell the public about my watches in the shops!" I'd like to think that this viewpoint was rare but I've heard the exact same thing from other brand representatives as well. Thank go...
login to reply

By: Ares501 - Mr Green : April 12th, 2013-02:14
there are posts on this forum that perform that wonderful feeling that you call gut feeling but you feel it around your heart and your response dear Art to MTF's wonderful post is just epitome of them. You never case to amaze me my friend Thank you for sh...
login to reply

Thanks for the kind words, Damjan. Wouldn't it be something to . . .

By: MTF : April 12th, 2013-02:20
Dear Dr No, Thank you for the illustrative story about one watch and two of its owners who met but did not know it. Such depth of connection and story is impossible to twitter on the ethernet in 150 keystrokes or less :-) My cynicism is lifted a little bi...
login to reply

Had it not been for the wealth of information on the 'net . . .

What a wonderful "anecdote" Art, you say "coincidence" I say...

By: Dr No : April 12th, 2013-11:45
. . . is more than a bit imposing, albeit unintentionally - that, I'll readily grant. 'Dr No' was what my colleagues called me for a time, François. My position involved telling people they were no longer desirable as customers, hence the nickname. Happy ...
login to reply

Thank you for your reply Art. [nt]

We take on the most unlikely Avatars

By: Ares501 - Mr Green : April 12th, 2013-12:41
I think that we should do something to have synchronous meeting with Art ;) cos I also don't believe in coincidence Cheers Damjan
login to reply

Yes Damjan, lets try to have a nice meal somewhere in....

By: Sandgroper : April 13th, 2013-06:05
Europe over Christmas New Year with Art....you organise it and I'll try to follow:) from Down Under! Nicolas will have to be part of it, synchronicity oblige, dear Damjan:):) Vidimo se uskoro. Francois
login to reply

Yes Art you're right and from what I read the food is....

That story is still as amazing and touching...

Thank you MTF, this is wonderful, the Motto reflects....

By: Sandgroper : April 12th, 2013-01:32
exactly my thoughts, in today's world where so many goods are so badly made, actually they should be called bads not goods:):) Thanks to your reviews and articles which I have read lately I am realising that Piaget was firstly a watchmaker, creator and ma...
login to reply

By: MTF : April 12th, 2013-02:26
sandgroper, Our mission has been to find perfection in an imperfect world. We never succeed 100%, by definition :-) But we still try. We need more people to share their thoughts or this will become a place of press releases and "look at my new colour stra...
login to reply

For me it was this particular Altiplano

By: WHL : April 17th, 2013-18:19
40 mm, with small seconds asymmetrically placed: It is every bit as nice as the Vacheron Constantin Patrimony Contemporaine that is my absolute favorite dress watch. Oh.....those Piaget straps can be kinda pricey.....I don't think we'll see a lot of those...
login to reply

By: MTF : April 17th, 2013-20:32
are priced as luxury items but not as MUCH as Audemars Piguet, in a PuristS qualitative discussion that does not mention actual money figures :-) I used to employ money-equivalent euphemisms like "price of a magazine" or "about 5 Rolex Date-Just worth" bu...
login to reply