If I were to pick out an image that would best describe (arguably stereotypical but not without some merit) the spirit of the street, it would be this photograph of a young man driving our "tuk tuk". His eyes are always moving about even when we're at a stop. He has something in common with a lot of the folks that we had the pleasure of interacting with regardless of whether they were from Delhi or Mumbai. I can only describe it as hustle, always thinking a few steps ahead of where they're going to make that next rupee. I remember when we were in a rented car enroute to Jaisalmer from Jodhpur, my friend and I were talking about changing itineraries that would necessitate a car and a driver. Our driver got wind off it and he was on his phone making arrangements. Before we could open our mouths to ask him for referrals, he already had a name and number. In markets, they'll always see if they can sell you something else right after an item is bought sort of like Amazon's if you liked this then you might also like this sort of thing. They'll push but never in a rude manner. And if you say no, they stop. It's something that I admire about those that i crossed paths with. Hospitality is another thing but maybe for another post when I'm able to locate a couple of photos about our guide in Jodhpur. I'm looking forward to when i can go back! 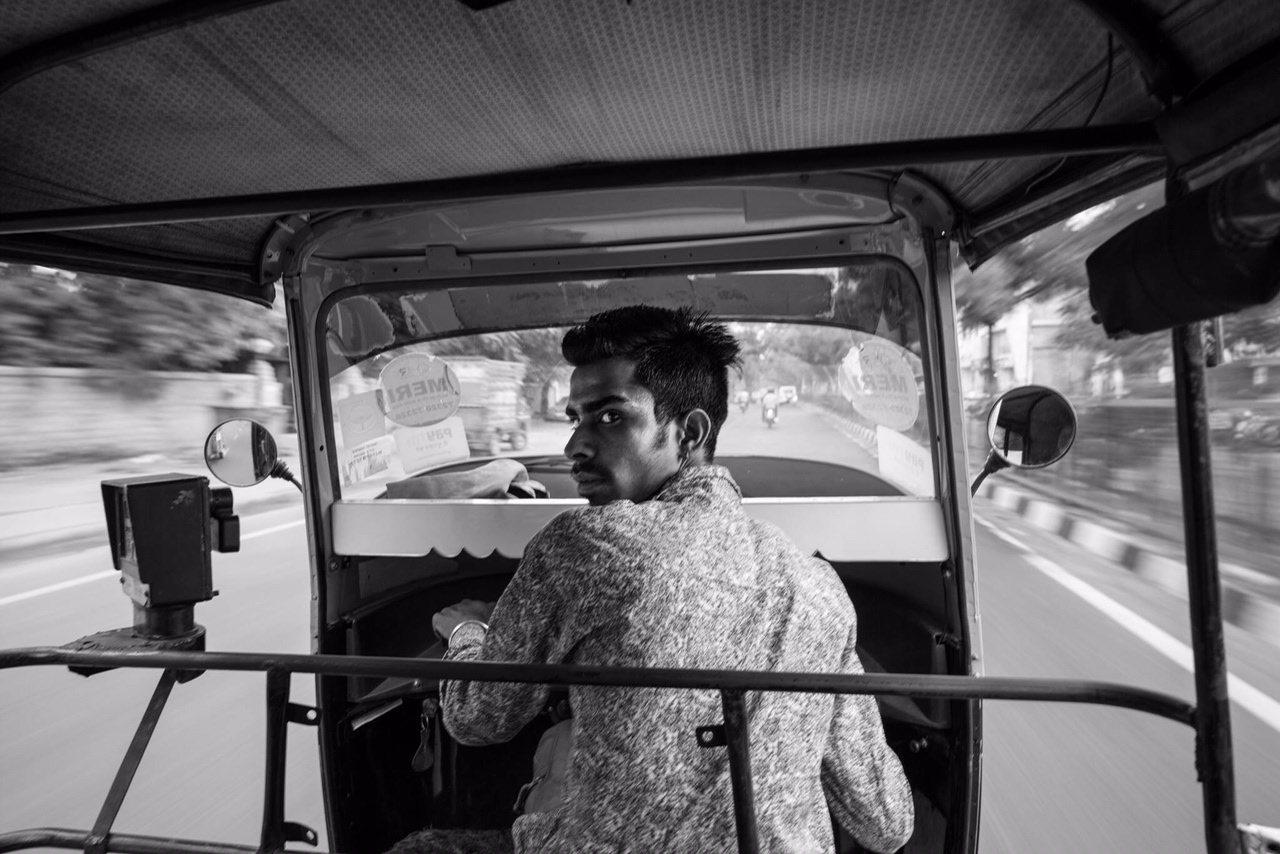 This image is about what the Monochrom can do in adverse lighting situations where you have extreme shadows and highlights. I almost always expose for the highlights and in cases where I am able to shoot at base iso (320 with the M246) I underexpose further knowing that i can push by 3 stops in post (Lightroom). In this scene, the original photo exposes the part where there's an overturned basket of garlic which has similar exposure to the right part of the frame. Everything else below that peeling paint on the wall is dark. So dark that you can hardly make the 2 gentlemen in the foreground in the LCD. At close to or at base ISO, you can retrieve detail with very minimal noise. With a color M (not sure about the M10) it will not be as clean. I always get a kick out of showing that process in my workshop and have managed to sell a couple of Monos for the boutique via this image :p 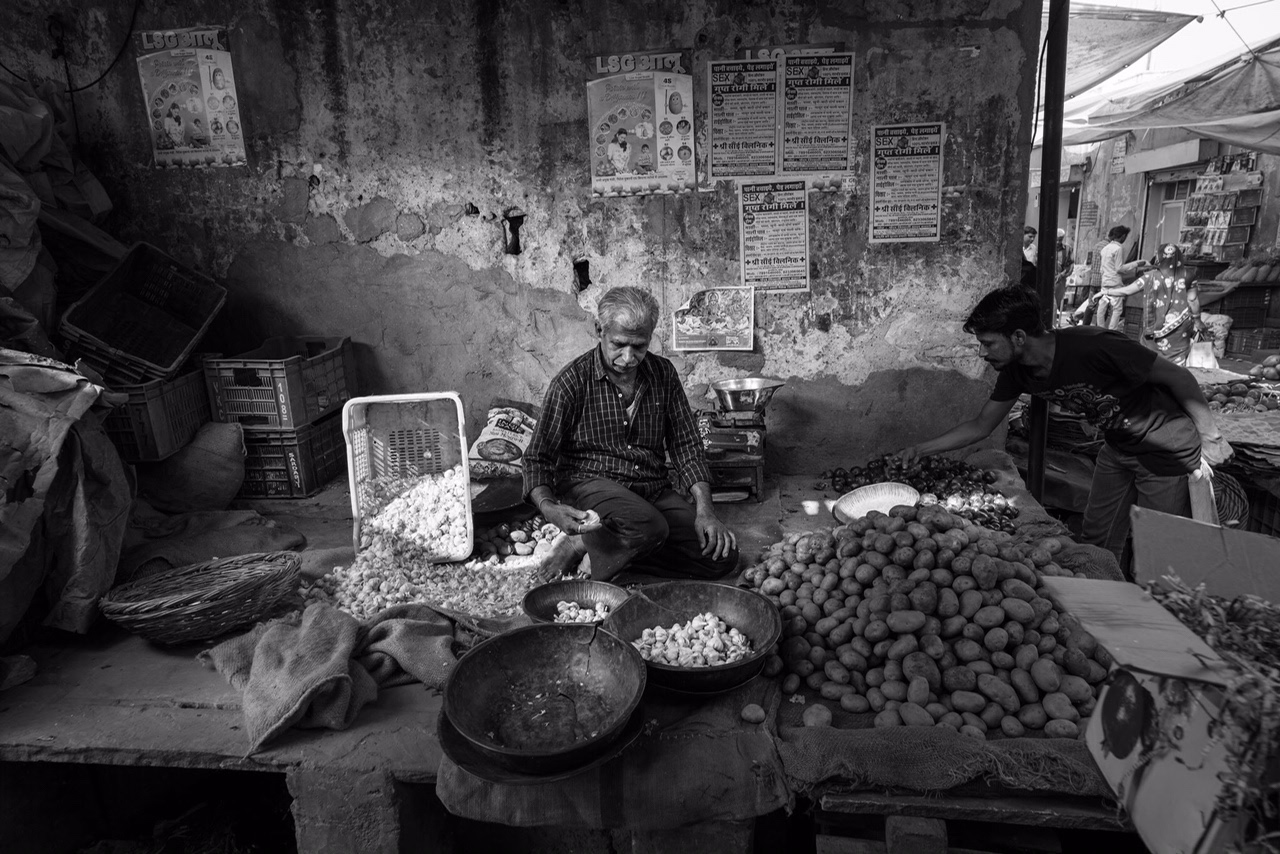 There's 2 things that i want to share here. Technique manifests itself here by way of sheer courage and doing the exact opposite of what I just said in the 2nd photo. If you want to photograph something but feel a bit intimated, well, you just have to suck it up and think about the fact that you don't want to go home with a lot of what ifs. Turn doubt into something productive. In my case, it meant blocking his way as he pushed his cart of potatoes, raising my hand and showing him my camera while flashing a really big stupid smile. Of course, prior to that i already figured out my cam settings, focused which is easy with a wide at 5.6 as you can get away with the 2 patches not aligning a 100% when you're feeling the pressure to just take the shot then click and was out of his way in a jiff. The 2nd thing that i want to point here is a way to handle scenes with a lot of elements which is really India. Contrary to photo 2, here I expose on the midtones (push cart man in particular) and willfully blow out the background (in this case probably clouds and errant wires). Depending on how the elements are spread out, it may or may not work as effectively. 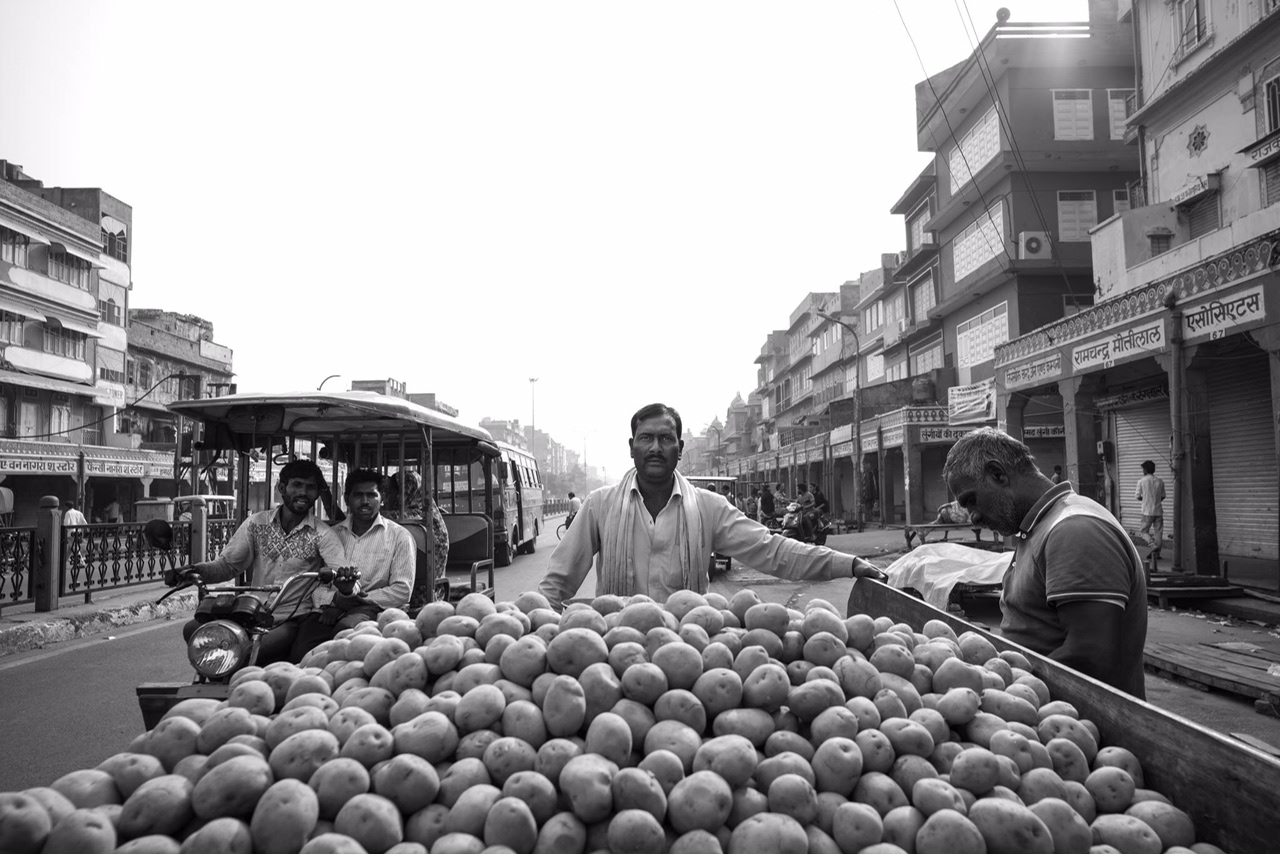 By: Echi : May 22nd, 2020-04:09
I\'ll end this series with 3 images that somehow capture different aspects of travel photography.. culture, equipment, technique. Enjoy Jaipur, India, 2017 Culture If I were to pick out an image that would best describe (arguably stereotypical but not wit...
login to reply

Superb post, the photos and the explanations. Thanks, Echi, for this very good moment. [nt]

Pleasure was all mine. Thank you (nt)

By: Jurry : May 22nd, 2020-05:19
But if you want to describe India in just few words (which is impossible) I would say; “In India you’re never alone”. Wondering if you recognize that phrase after your travels
login to reply

Being an Indian and living in India, I can feel what you meant by that...

I was waiting for Pun to chime in. But, yes, I definitely know what you mean :-) (nt)

Photo two was a good sell for the Mono! :)

By: fernando : May 22nd, 2020-06:06
I can see why. From the blacks to white and every shade in between. Great tones and dynamic range. If I ever capitulate, it will be your fault. BTW, whats your take on the M10M vs. M246? Regards, fernando
login to reply

Hehe you're on a slippery slope. The store called me when a M10M shipment came in but that was right before the lockdown. Maybe when things open up some more, i can go test it. If I had the money for it, I'd switch simply because of the weight/size..

By: Echi : May 22nd, 2020-19:39
The increased pixel size is both boon and bane. It may necessitate me upgrading my old yet hardly used macbook pro. In these times, that might be too much for me.  Comparative reviews that I've read point to a good result although the price diff may not j...
login to reply

An enjoyable read. Much appreciate [nt]

This has been a very enjoyable series.

By: TheMadDruid : May 22nd, 2020-10:41
Each photo has shown incredible contrasts with interesting subjects.
login to reply

Thanks, Padj. Glad you enjoyed it (nt)

getting the most out of the each moment...

By: cshimokita : May 22nd, 2020-14:40
and at the same time having the bandwidth to capture the uniqueness (the culture) that is present, means (in part) knowing your equipment (visualizing the results), and having chosen the kit that complements the situation and your ability. I am reminded o...
login to reply

"A matter of looking for good light" ..

By: Echi : May 22nd, 2020-19:44
That is ALL. But such a simple statement means so many different things. In the days of Luminous Landscapes, I was conditioned to think about good light in terms of a perfect bell curve histogram.. quite a good guideline and yet can be very misleading! Yo...
login to reply

By: Quan : May 23rd, 2020-02:15
This will convince people to see vibrant color of India in monochrome. Thanks for sharing good tips
login to reply