Jan 22, 2023,07:50 AM
According to one blogger ... I ran across this video and thought there might be some interest, and I have no connection with Marques Brownlee. Having said that, let's take a look ... 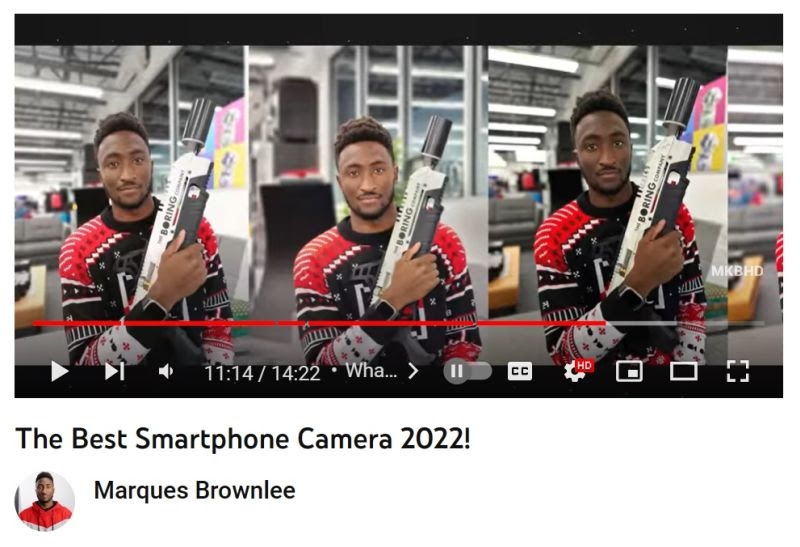 By: cshimokita : January 22nd, 2023-07:50
According to one blogger ... I ran across this video and thought there might be some interest, and I have no connection with Marques Brownlee. Having said that, let's take a look ... ...
login to reply

Very interesting! I don’t know all these phone but just upgraded from the iPhone 13 Pro Max to the 14 Pro Max and it was a massive improvement…

By: Chronometer (aka yacomino) : January 22nd, 2023-11:32
I did consider the Google pixel Pro 7 but was reluctant to switch from the iOS to Android…I also consult dxomark for their rating on phone sensors (and cameras)…cheers
login to reply

I am using Fujitsu Arrows U - android, which was not part of the analysis

I did not expect to enjoy that as much as I did!

By: J_Warden : January 22nd, 2023-14:25
I like the way they designed this competition and it was fascinating to see how differently these phones perform. I think it’s nearly time to upgrade my iPhone 7. 🙂 I also I want a histogram T-shirt like the host was wearing. So cool!
login to reply

By: Echi : January 23rd, 2023-00:11
Now that I know what kind of an iPhone user I am, I’d probably go for a gen or 2 older than current. Also realised I don’t need the biggest screen! Fighting the upgrade battle is a losing one but I’ll slow it down where I can. Same goes for my MacBook Pro...
login to reply

By: Echi : January 23rd, 2023-09:36
Nothing “planned” about it from the end user’s perspective :-p Gotta fight the establishment! My pick up is on its 10th year, for example. I had breakfast yesterday with a friend who still owns the c63 that i had the pleasure of riding in more than a deca...
login to reply

I totally follow you on the car digression. I really plan to keep my Alpine and my P1800 the longest time possible.

By: J_Warden : January 23rd, 2023-23:45
My P-1800 (a red 1971 model) is the only car I regret selling. Best car I've ever owned, and the coolest too. It was impossible to stop at a gas station to fill the thing up without a stranger striking a conversation about their uncle that owned one back ...
login to reply

Or... Someone who asks if it is for sale. It happens to me once a week, minimum.

We are of the same mind regarding the phones.

By: J_Warden : January 23rd, 2023-23:43
I remember replacing the battery for my 7 at the Apple store and they were shocked that I wouldn't just trade the thing in on a new model, but it does what I need it to do!
login to reply

By: India Whiskey Charlie : January 22nd, 2023-15:51
I have had a Google device (Nexus/Pixel) ever since I started using smartphones and currently have the Pixel 7 Pro. My wife, on the other hand, has had an iPhone since the first generation and her current 13 Pro doesn't hold a candle to my Pixel in so man...
login to reply

By: Mary Anny : January 23rd, 2023-07:39
A step ahead compared to many comparisons in the Internet, which can be too subjective. Nonethless, for even more reliable results, I would have taken two at least photographs for each situation. Many more samples but a more robust experiment! Thanks for ...
login to reply