Dear all, Recently I attended a watch event and saw some amazing pieces, especially for Pateks ! 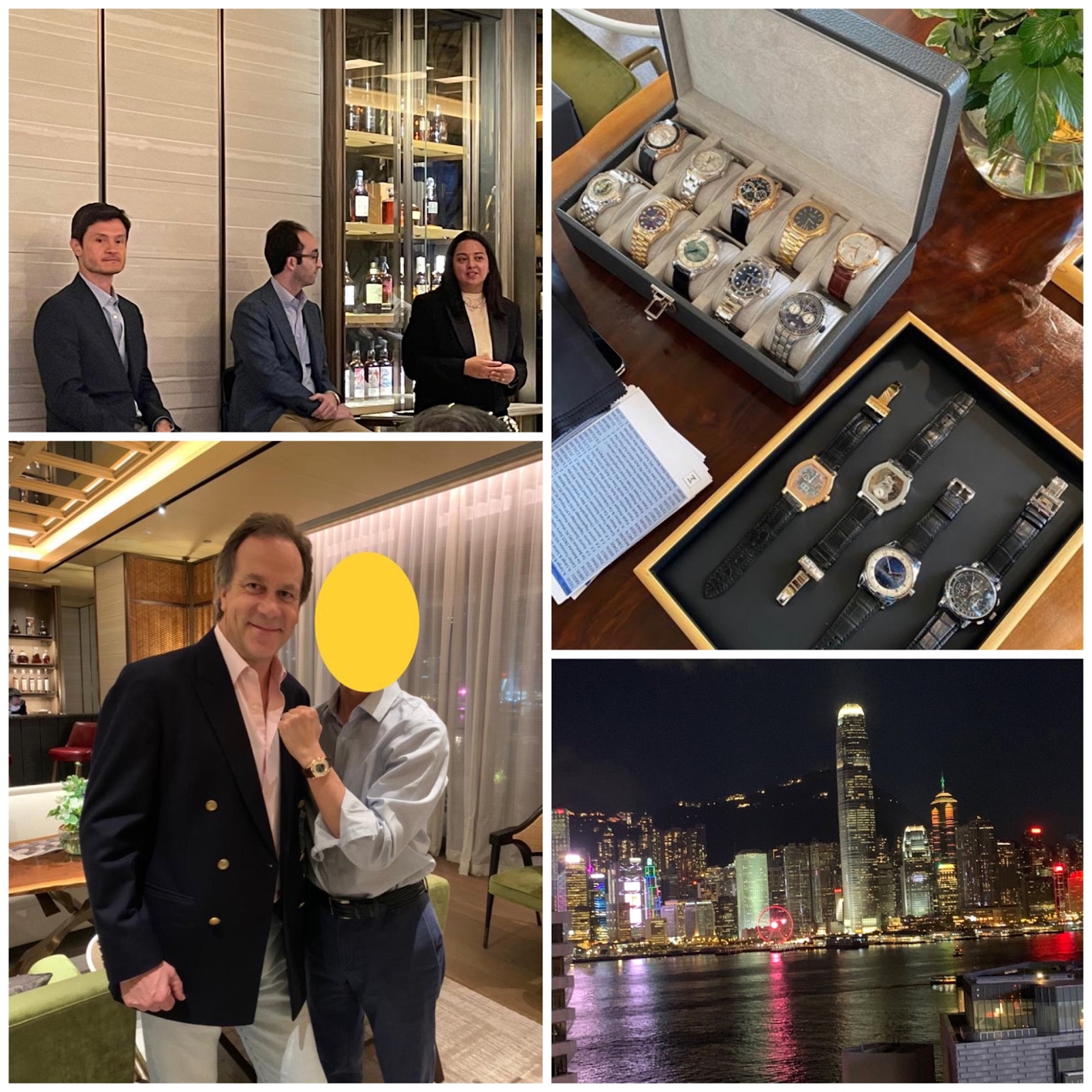 So many watches were there that this occasion felt like an auction review !  I was too busy to eat much but was totally full from viewing and inspecting so many watches.

This gathering was held at the classy and elegant Gentry Club, a private members club with rare whisky, cigars and other collectibles created for the VIPs of K11 Musea.  K11 Musea is a new destination developed by New World Development with CEO Adrian Cheng’s vision of combining and promoting art, culture and design under one roof.  New World Development also owns the famous Carlyle hotel in New York City under its Rosewood brand.  The newly opened private club Carlyle & Co., inside Rosewood Hotel within K11 Musea, is modeled after the iconic Carlyle hotel with its famed supper club and Bemelmans jazz bar. 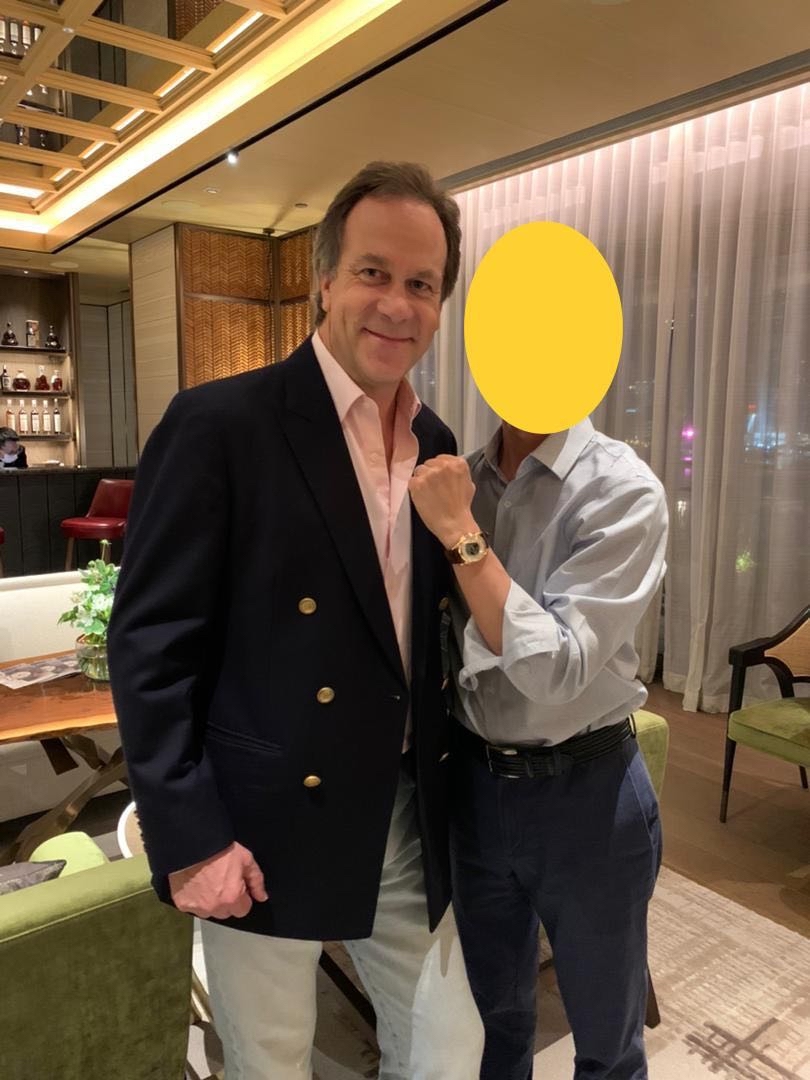 Although he did not present to the audience, the special “attendee” of the evening was THE Legendary auctioneer Tim Bourne, gentleman who auctioned off the highest priced watch in history (excluding charity auctions such as Only Watch) !  He was friendly, and explained to me that the Henry Graves Supercomplication, which was sold for $11mn in 2009, was auctioned off by him in 2014 for a staggering US$24mn !!!!  Tim mentioned that the Supercomplication will unlikely see another auction given the buyer’s profile and horological passion.☹️   As a true professional, he would not say who the owner is even though I pestered him on it.😜
A couple years ago, Bonhams the UK auction house made a huge move/investment by hiring Tim THE Legend away from another place.  Tim is now helping Bonhams to build its watch business in Asia.  He told me the next Bonhams auction will be later on this year.  I promised him that I will be there to watch him in action, and he said that he would find more enamel pieces for me to bid on.  Was he trying to feed on my enamel addiction?🤣   Thinking more, I should have asked for his autograph and/or a GTG just like a WIS groupie !!😜 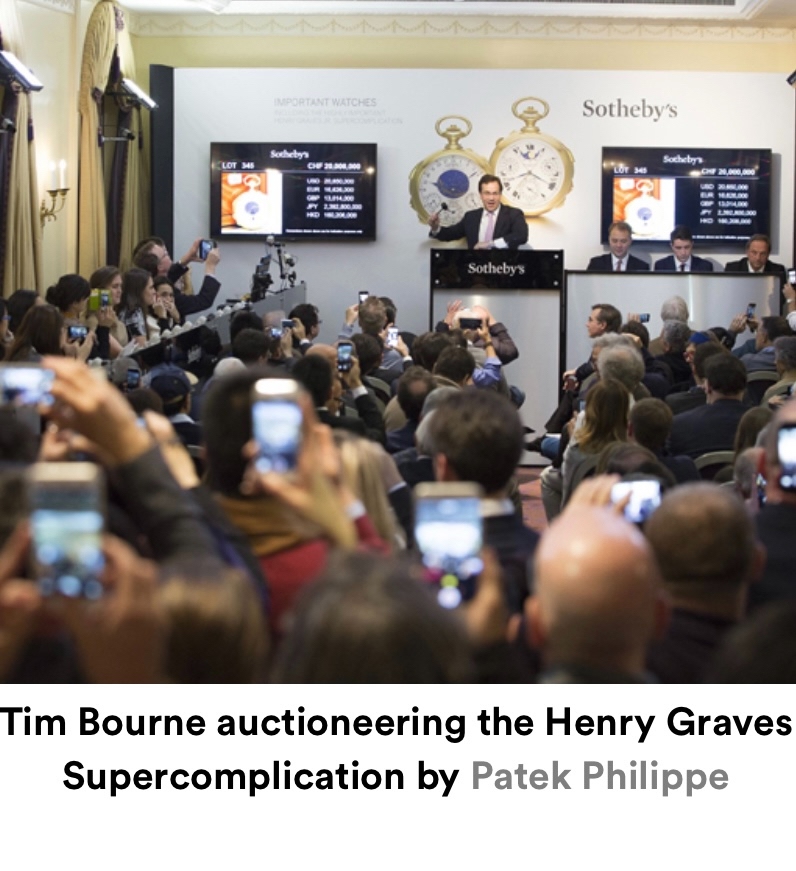 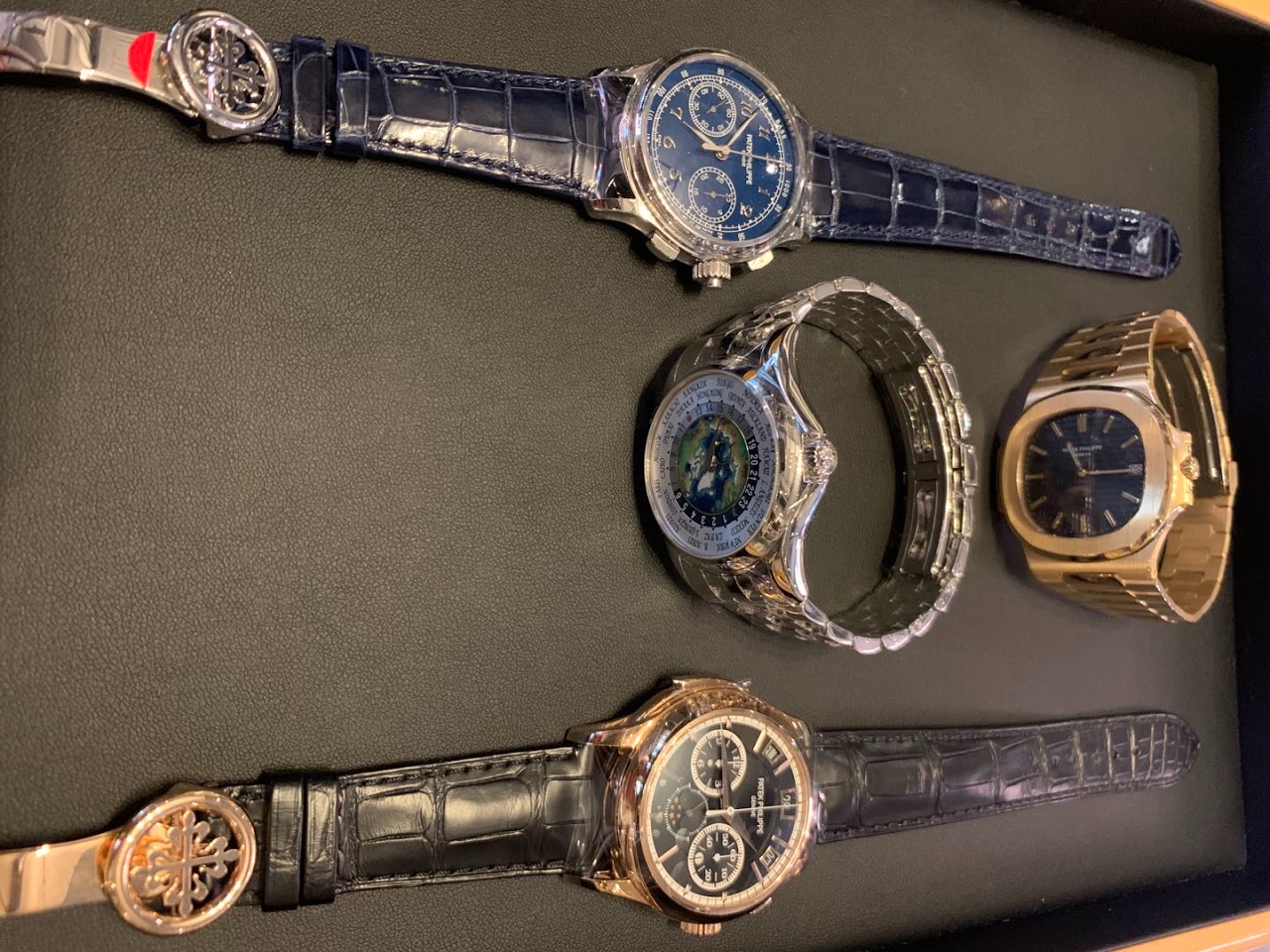 Watchbox (a large pre-owned luxury watch company with international presence) was the co-sponsor of the event and it gave a presentation about its vision & mission.  It then presented and let the guests inspect trays of watches from big maisons to well-known independent brands: something for everyone.  According to Josh (Director of Trading at Watchbox), Watchbox owns over 5,000 pieces in its inventory !  I can only imagine how much it takes to keep this many pieces ! 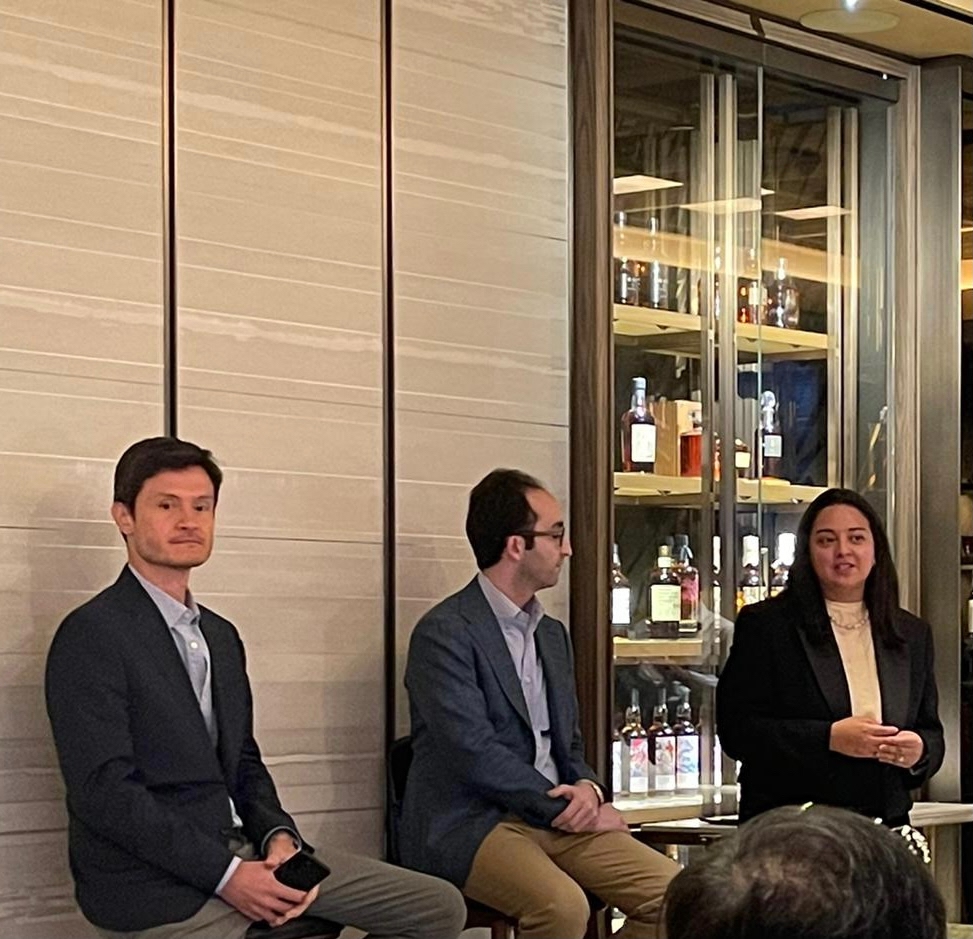 Terence and Josh of Watchbox on the left and middle, & on the right Vanessa, Head of Elite Client at K11.  Vanessa, who is a Yale graduate and a former employee of Sotheby’s, has absolute fluency in Chinese (reading, writing and speaking !!!) 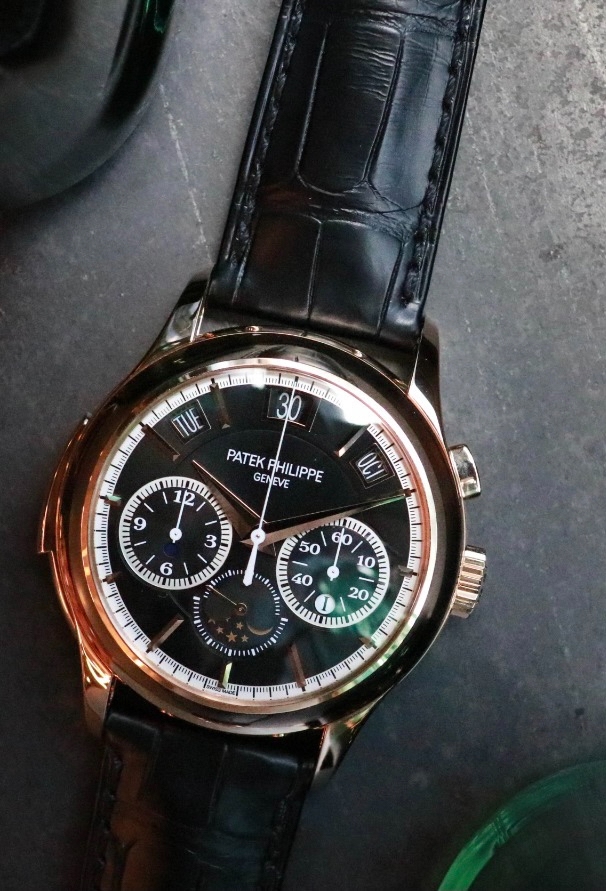 The sounds of the 5208R are fantastic and warm: literally and figuratively music to my ear ! 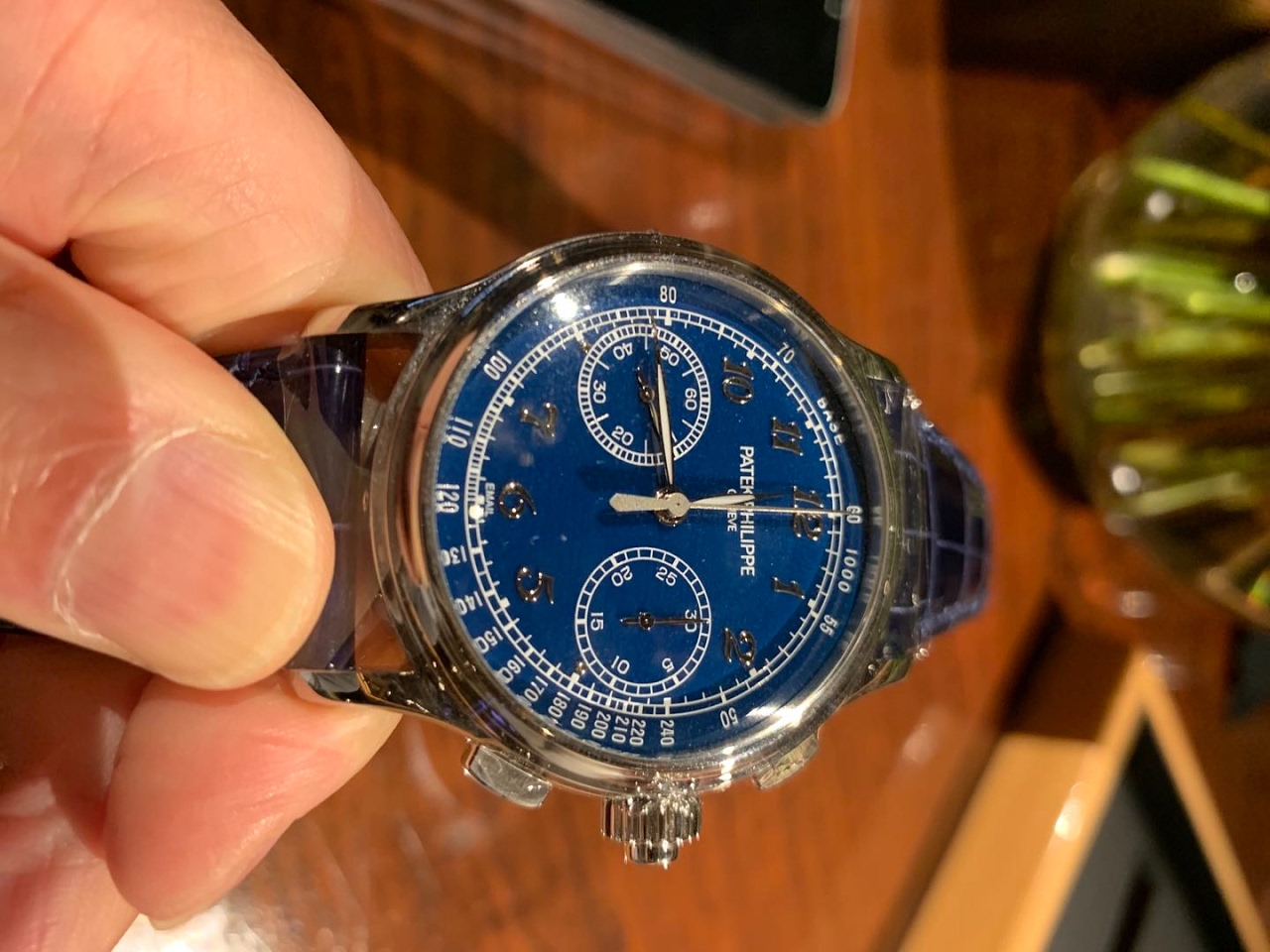 The enamel dial of the blue in the metal is better than press photos !  The enamel dial is smooth and even !
Seeing the 5208R (PCC with ding ding ding) was a total surprise, and so was the 5370P-011 grand feu enamel blue dial.  Josh and Terence of Watchbox were kind (perhaps crazy??🤪) enough to allow me to “play” with both.  Seeing me drool, my wife immediately warned me about the possible watch prices.  Even though she had no idea about their pricing but she knew they were worth way more than our car.  Hence I was super careful, especially on the 5208R and 5370P.  Unfortunately I could not compare the R to the P because the P was sold the day before the event.  Darn !! 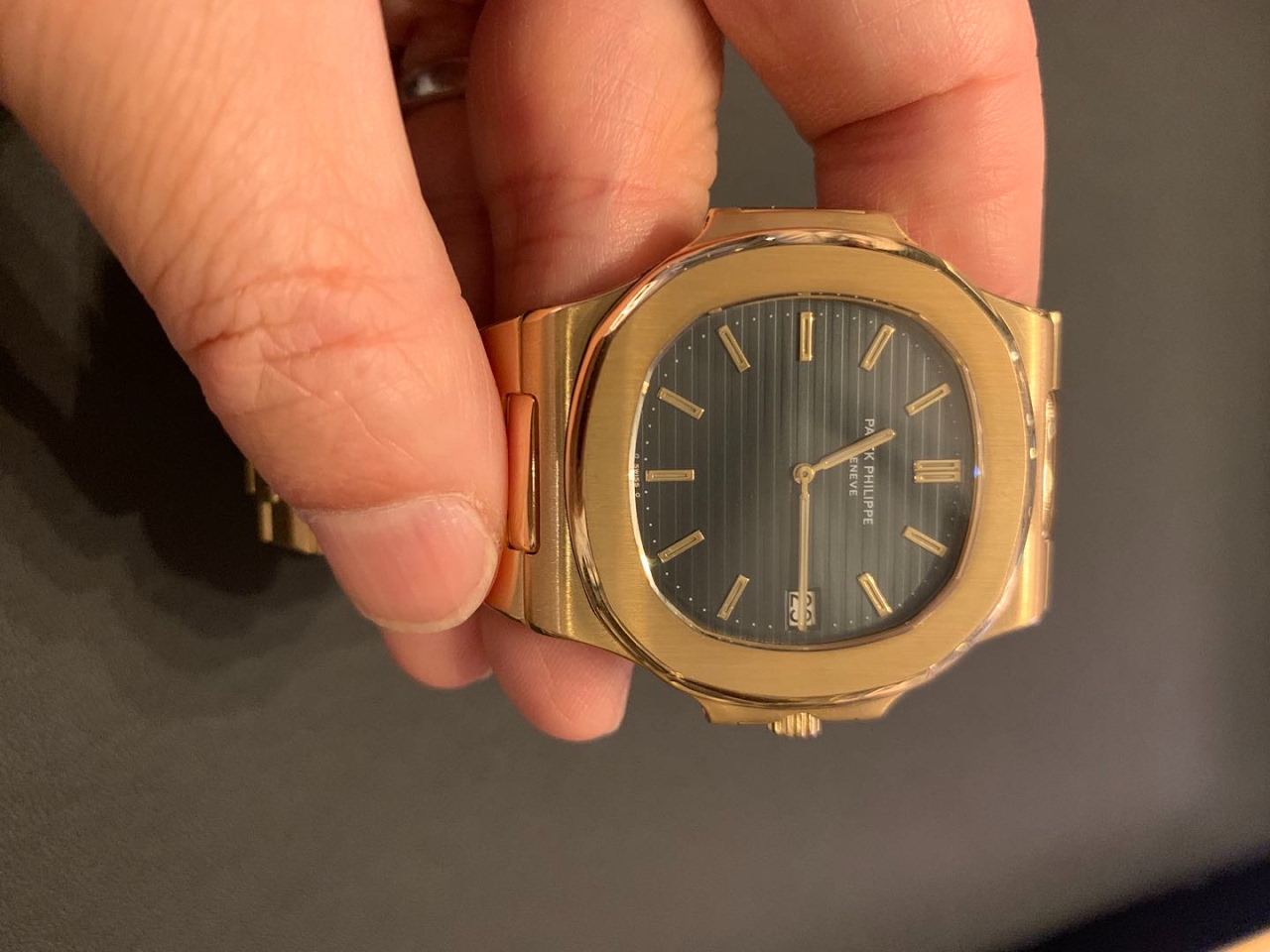 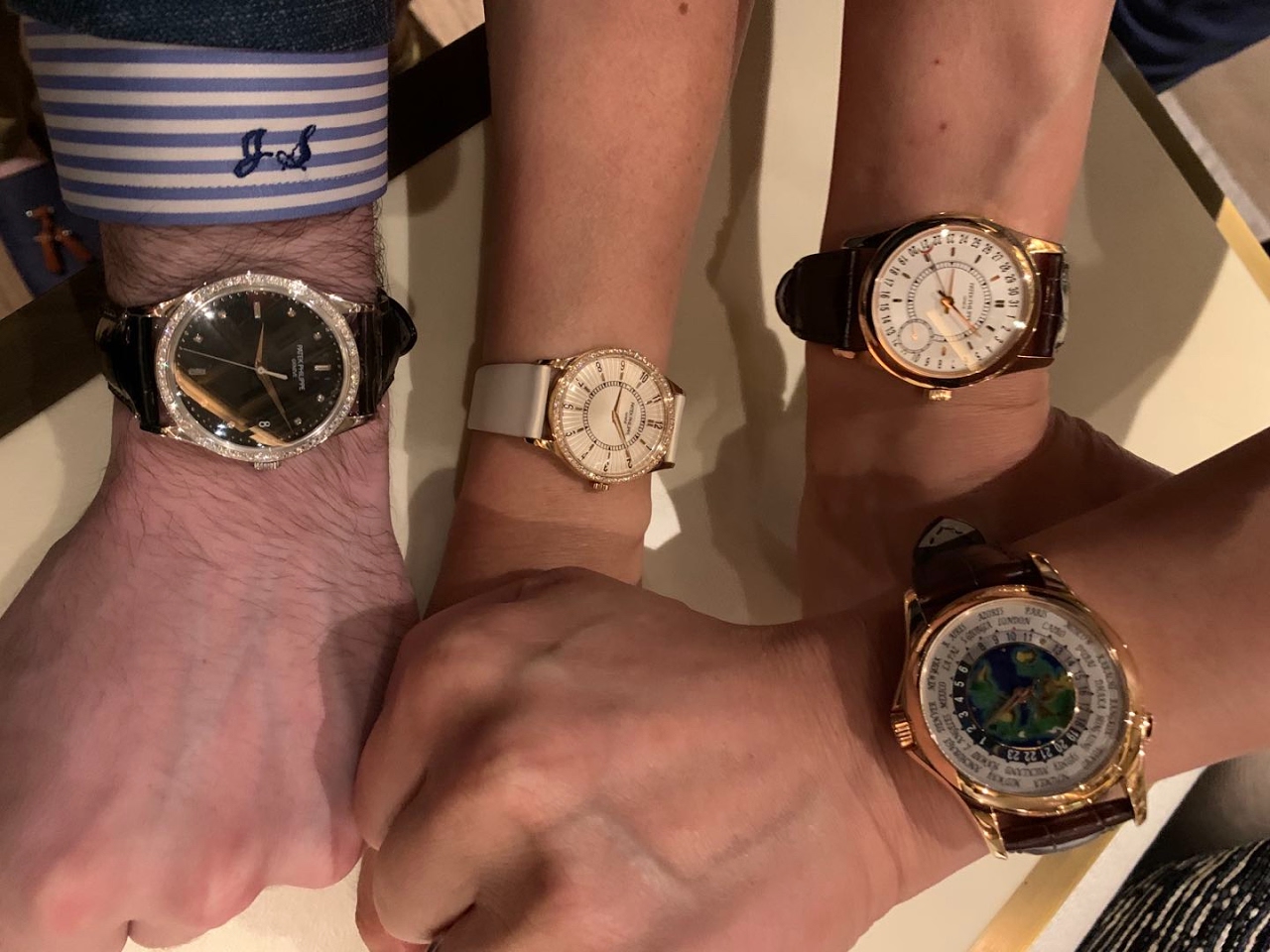 Obligatory wrist shot !  Can you name these ☝️ references? 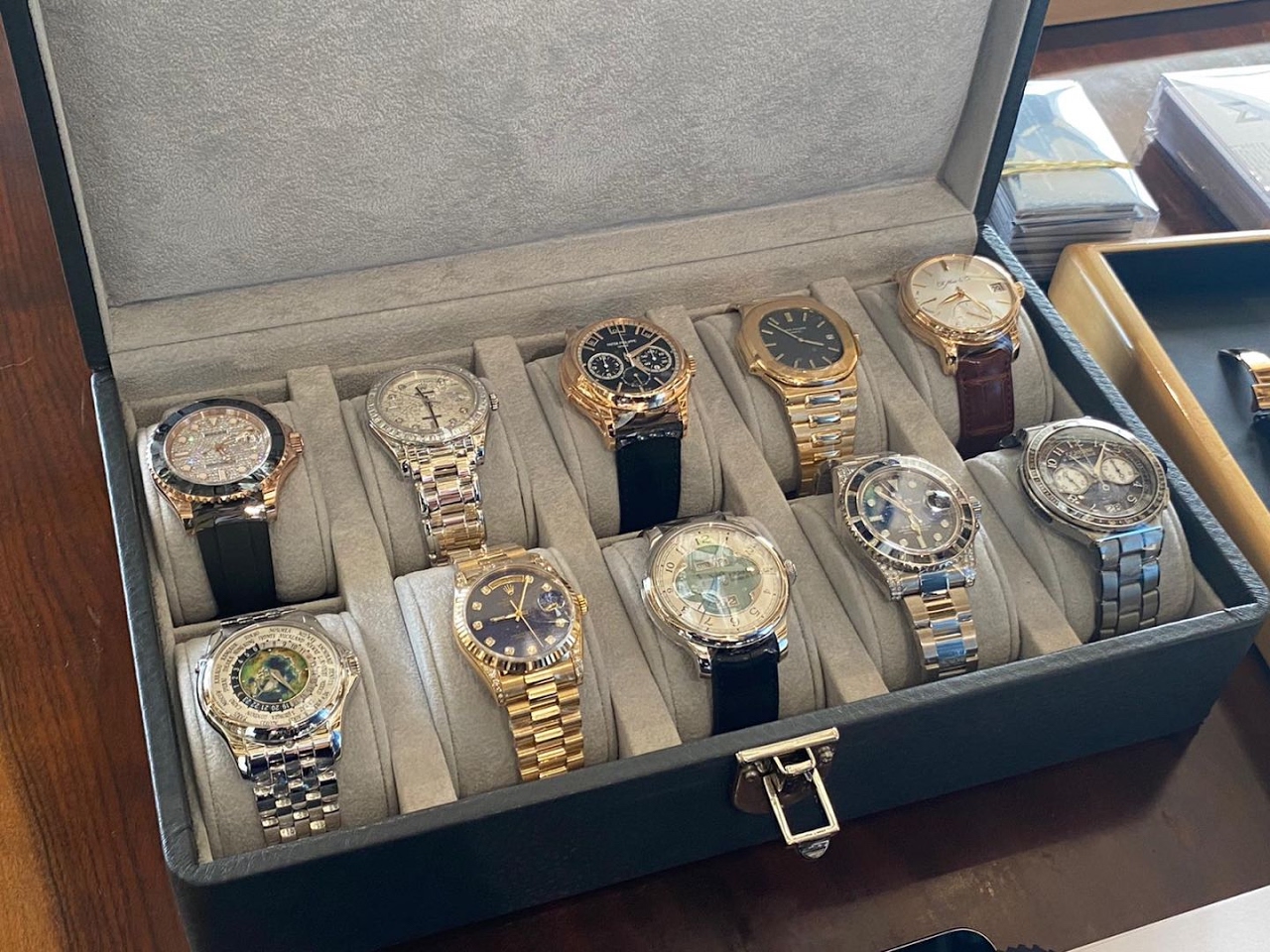 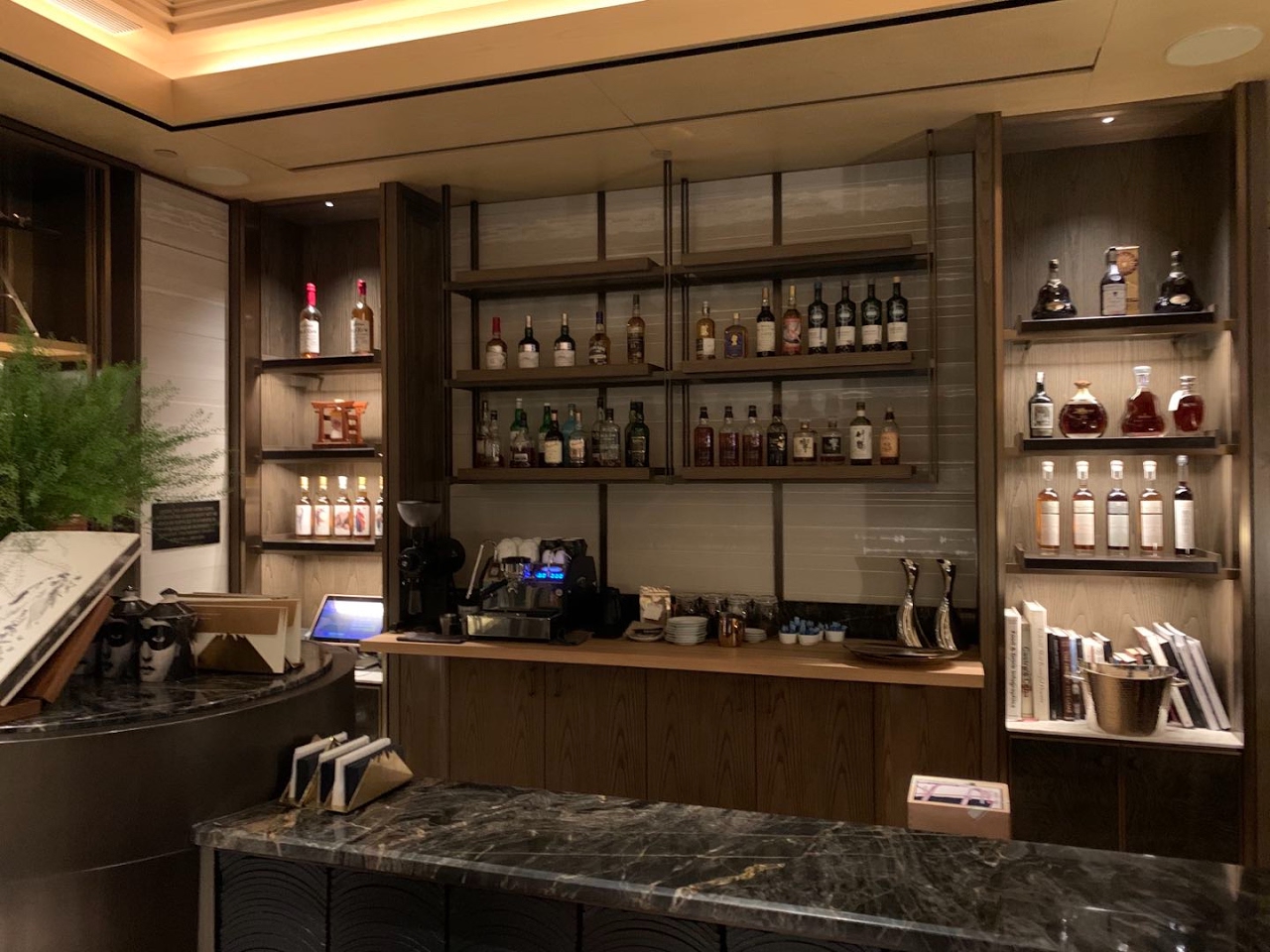 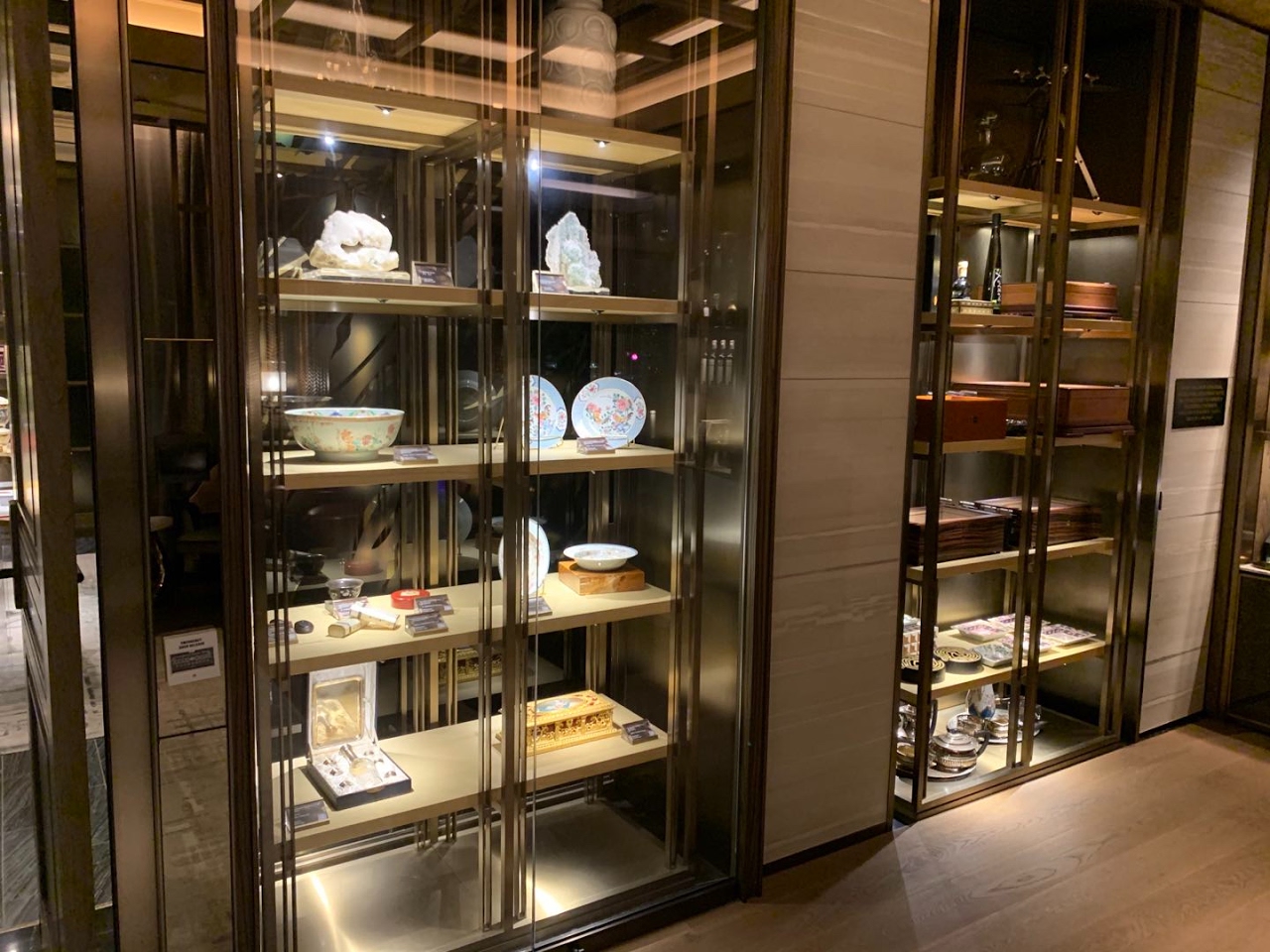 Lots of Antiques and cigars ☝️ 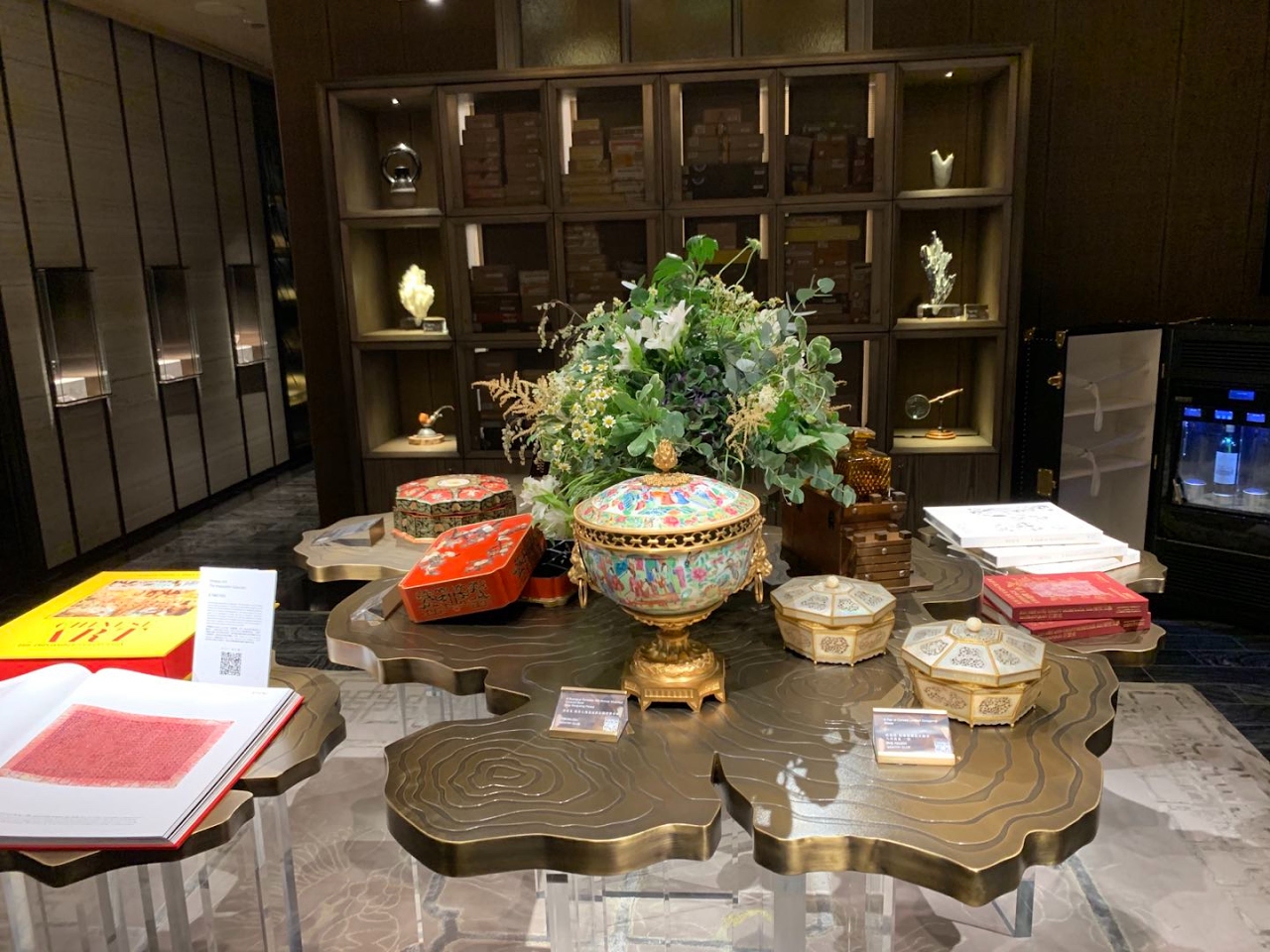 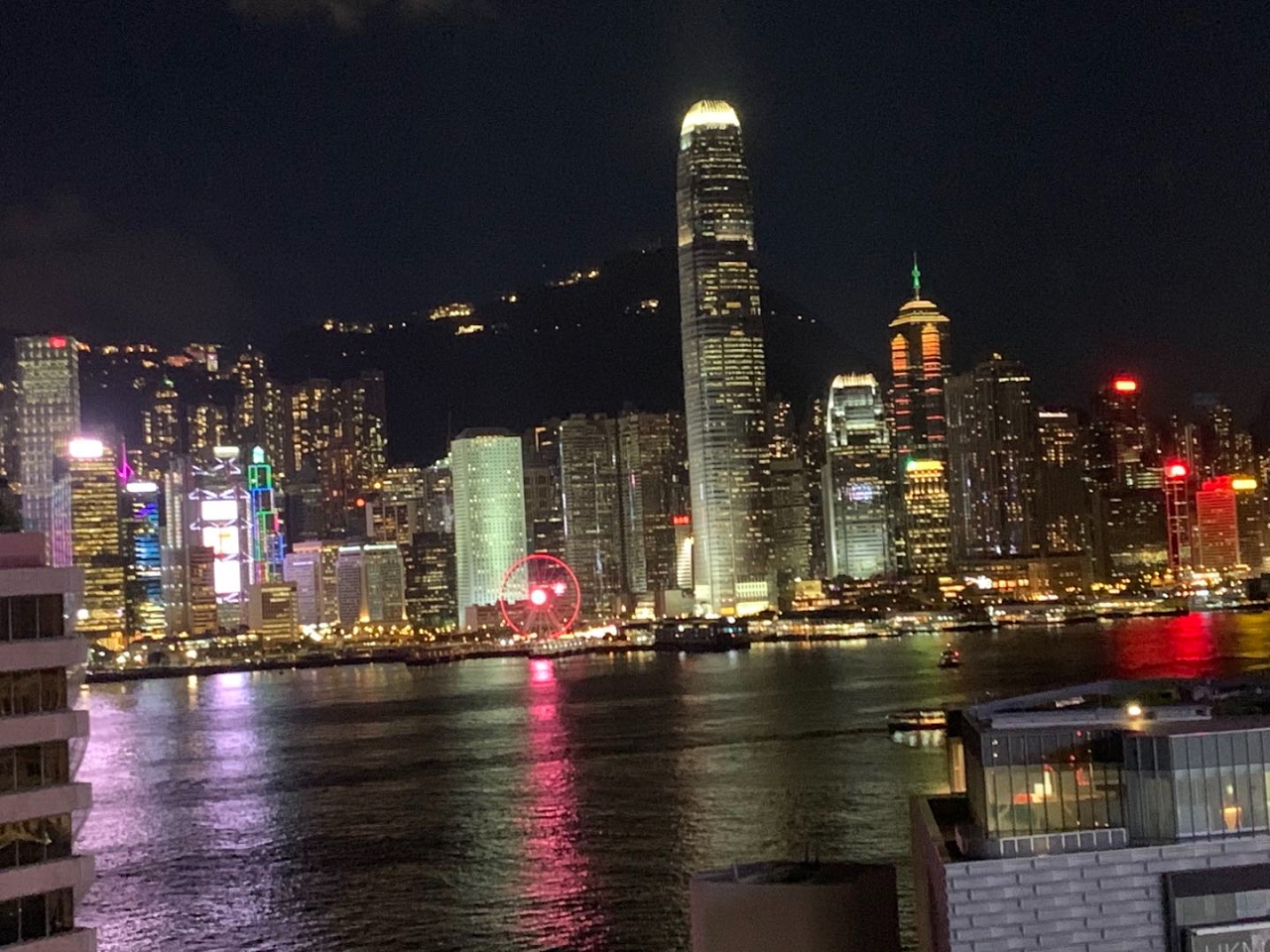 Lovely view of Central from the spacious balcony ☝️

I had sweet dreams of toying with these grails while drinking whisky & eating cheese platter with prosciutto served that night !

What do you think of these Patek pieces and venue?

p.s. my post on this event on “horological meandering” with photos of non-Patek watches

Dear all, Recently I attended a watch event and saw some amazing pieces, especially for Pateks !

By: GLau : July 18th, 2021-15:22
So many watches were there that this occasion felt like an auction review ! I was too busy to eat much but was totally full from viewing and inspecting so many watches. This gathering was held at the classy and elegant Gentry Club, a private members club ...
login to reply

Yes, I was very PLEASANTLY surprised by the minute repeater !

yes, wonderful watches and a

What a lovely evening my friend, it looks like you made the most of it. All the best, Tony

Thanks Tony ! This watch gathering was fun and the

By: TheCollector1688 : July 18th, 2021-15:55
Good to see the watch world is finally holding these gatherings. Looking to seeing more as the Covid19 hesitancy wanes and collectors come out in force…let the watch collecting season begin anew!!
login to reply

Yes, hopefully larger gatherings as such can continue to be held !

Glad to find out that you found two pieces you like !

Thanks Gordon, and "5089R" gave me a great idea for a suggestion to Patek...which would be quite amazing if it materializes! Never say never with our favorite brand! ;-))

Nope, those already exist, for instance with the 5531R...more "humbly," I was really thinking of a 5089R, given that all iterations of this specific reference so far have been in G gold...

Yes, everyone there enjoyed attending such a gathering ! Been cooped up too long !

That blue enamel dial, wow. And the rest of the watch I guess is not bad either !

By: Jay (Eire) : July 18th, 2021-16:31
There were several pretty heavy hitters in terms of horology there. Your wife was right to be cautious and to police your enthusiasm ! 😂
login to reply

Yes,Jay, fortunate that my wife was there to watch me like a hawk ! Otherwise,

By: GLau : July 19th, 2021-14:27
my collection might have increased substantially without spousal approval
login to reply

What a magnificent gathering.

By: watch-guy.com : July 18th, 2021-20:40
Jealous on so many levels , not the least you can have a gathering. We are again stuck in lockdown keep these pics coming Thanks Julian
login to reply

By: GLau : July 19th, 2021-14:30
sorry to hear about your lockdown. Hopefully the wave will subside soon on your end and restrictions lifted ! Best of luck !
login to reply

It seems some had a great time, there! ;)

Yes Nicolas, it was a wonderful gathering the amount and quality

Thanks Quan ! I was

Looked like a fun event Gordon. Thanks for sharing 👍

Thanks for sharing, Gordon.

You are welcome Henry ! Other than “reachability” , the

You are welcome cmclee ! The