Some people, especially in Brazil, think Santos Dumont co-invented the wristwatch with Louis Cartier. We know it’s not true, but according to Paul Hoffman, author of Wings of Madness – AFAIK the most comprehensive biography of Santos Dumont – he “…may have been the first civilian to own a wristwatch. Without any doubt, he gave start to the wristwatch fashion for men. Like other items of his wardrobe, the elegant men of the city (Paris) adopted it.”

That’s because Santos Dumont was very well-known in Paris not only as a genius of invention, but also because of his elegance.

Based on that I would like to hear your opinions about Santos Dumont role in the “popularization” of the wristwatch wear/use.

Santos Dumont was probably the best known male wristwatch wearer; aviatiors were global celebrities back then, Charles Lindberg had tens of thousands of people waiting for him when he landed in Paris. Nonetheless I would think his influence on the fashions of the day would have been limited to the upper classes. Cartier's clientele too in those days were mostly royalty, nobility and the wealthy.

What did propel the popularity of the wristwatch on a large scale was the First World War, as the men in the trenches found it more convenient than a pocket watch. Today you can still find, fairly easily, early wristwatches of that era made for the military, many with distinctive grilles over the crystal for protection. It was only in the post-WWI period that the sales of wristwatches really took off; vintage watches today provide a clue since pre-WWI wristwatches are exceedingly rare.

Nice insights, especially on the WWI.

In fact Paul Hoffman says exactly what you did about ladies wearing wristwatches in the late 19th century and that the militaries were the first men to wear them. According to Hoffman the German commanders used them on the Franco-Prussian War and British officials did the same during the Boers War. That’s why he said Santos Dumont would have been the first (man) civilian to own (even though I think that saying he was the first to “wear” would be better) a wristwatch.

By: Marcus Hanke : June 7th, 2010-12:49
.... since I assume that he did not wear this watch when being handed over from one distinguished salon and evening society to the next. Most certainly, he wore a conventional pocket watch then. Newspaper photography was an innovation not widespread, since it increased printing costs, so most pictures printed were still of the drawn/cut type, which barely showed small details as a watch. To prove my point, just execute a Google picture search for Santos Dumont: Not a single picture of him shows a watch. Most pictures depict him in a formal suit, with which a pocket watch was the standard accessory. The few pictures portraying him in his leather pilot outfit do not show any watch at all. Therefore, I do not think that Santos Dumont played any crucial role in paving the road to the wristwatch's success. I rather believe that it was Cartier's public relation that emphasized this story much, much later.

You raised interesting points, like the pictures, that really do not portray Santos Dumont wearing a wristwatch.

By: Marcus Hanke : June 7th, 2010-23:32
... since for me, the connection between Cartier and THE first pilot watch is still not known well enough with the majority of people interested in watches.

The points you raised were really interesting

Both World Wars probably did more for the upcomming of the wristwatch then Santos Dumont, but like you already pointed out I think that the fact that Santos Dumont wore a wristwatch in itself is the most significant fact. That makes the Santos indeed the first true pilotwatch and (again) Cartier as a true pioneer in watchmaking. Modern marketing has the tendency to portray these facts in the most glamerous way, often inviting the customers to create a more grande picture in their minds about these watches then the facts might justify. However, I rather have it that they do this about historic facts then that fushion mumbo jumbo that I hear so much about recently. But I guess that is just a matter of personal taste.

I do not disagree with your conclusion, which is plausible, but rather with the reasons.

I do not know Santos Dumont well enough, perhaps the biography Marcelo mentions would indicate, to say for certain if he wore his wristwatch on the ground. Because it was convention to wear pocket watches does not mean he stuck to that. Given his feats in the air I'd assume he was not the ordinary sort.

And even though newspaper photography was not widespread, newspapers were and that was good enough to spread news, perhaps of a wristwatch.

Remember that the Prince of Wales (later King Edward) did not do the bottom button of his jacket and that has since become de rigeur in men's wear. This occurred in around the same era as Santos Dumont's aviation adventures so it is highly possible Santos Dumont was one of the factors, but certainly not the only reason, behind the rise of the wristwatch, especially given the incredible adulation aviators received in those days.

As I wrote in my earlier post, wristwatches in the late 19th century were predominantly for ladies as jewellery, rather than functional objects. The first ever Cartier wristwatch dates to 1888 and it was a ladies' watch on a bracelet.

Some notable points about the Santos Dumont and earlier wristwatches,

- The GP watches for the Kasierliche Marine was a government order to equip military personnel and the watches were not sold to officers;

- Early wristwatches were made for women, including Patek, Cartier etc;

- The Santos Dumont was square - it was the world's first form wristwatch.

Thanks to Christopher Kilaniotis at Cartier for his thoughts on this.

The Santos Dumont was the first wristwatch with integrated lugs. 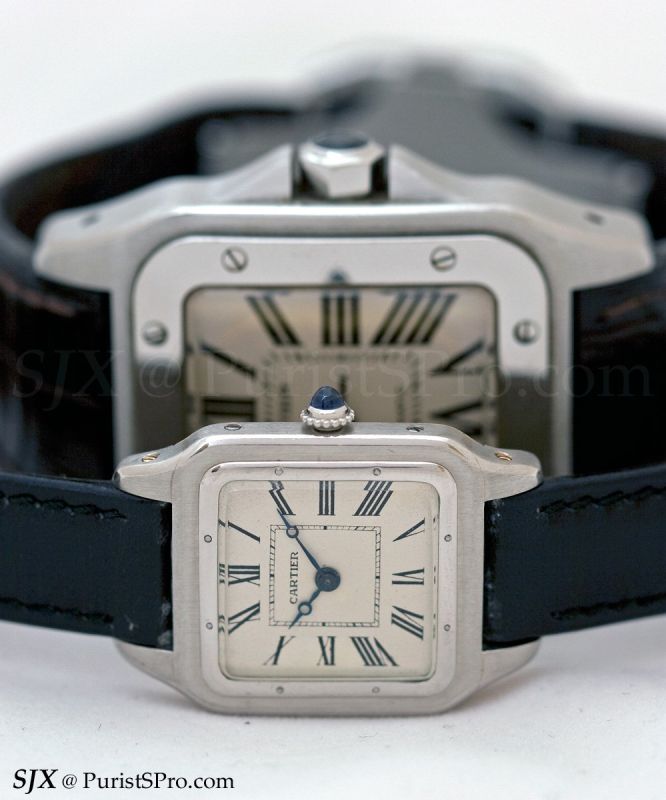 Other early wristwatches were often pocket watches with wire lugs soldered on or in some sort of leather wrist bracelet as below.

Thanks for Mehdi Sqalli at Cartier for this perspective.

From when dates this Pocket-Wristwatch?

And thanks for bringing info directly from Cartier.

Nice to have the confirmation that Santos Dumont’s watch was the first made for a civilian user.

I want to thank you and the others who replied, helping to make this post and Editor’s Pick.

New this year, is of course the Santos Dumont Squelette, with the open worked dial and new 'in house' movement.
I hope SJX will post one of his photos of this watch, so you can see the differences.

and here are some photos of the Santos Dumont skeleton. 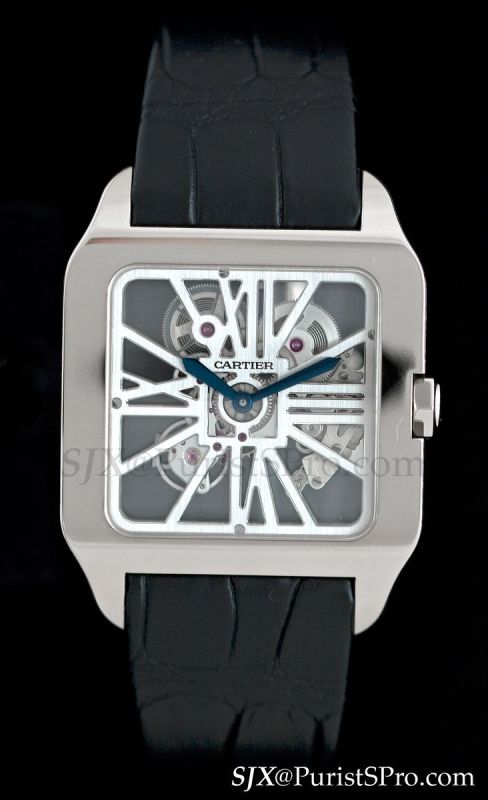 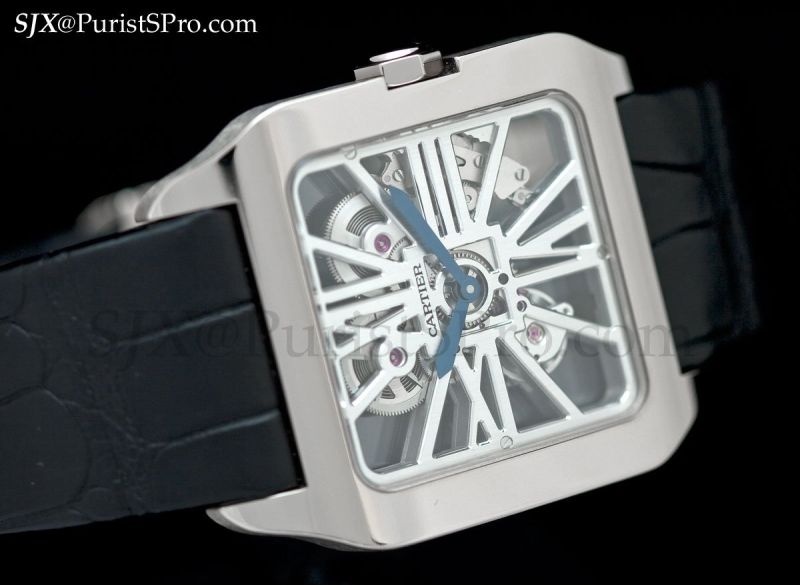 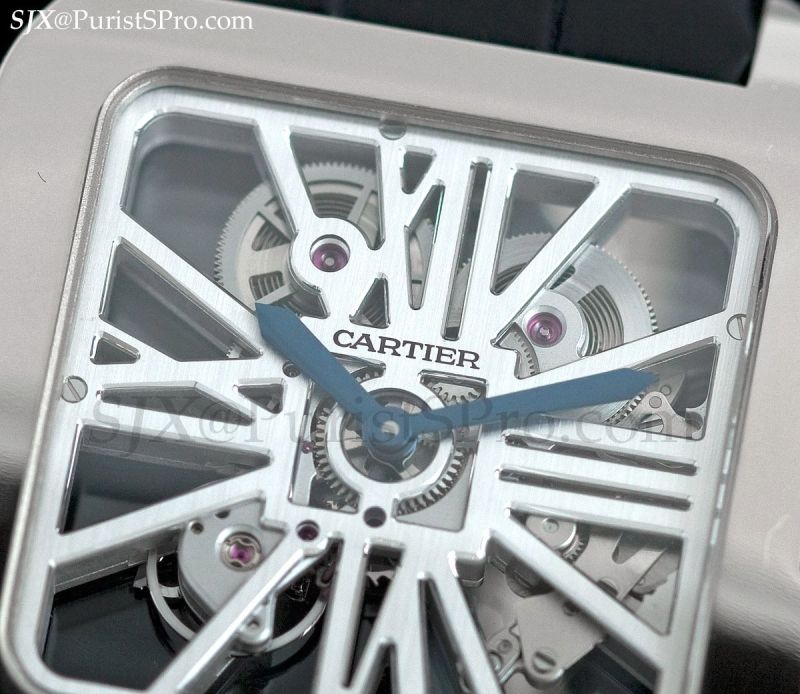 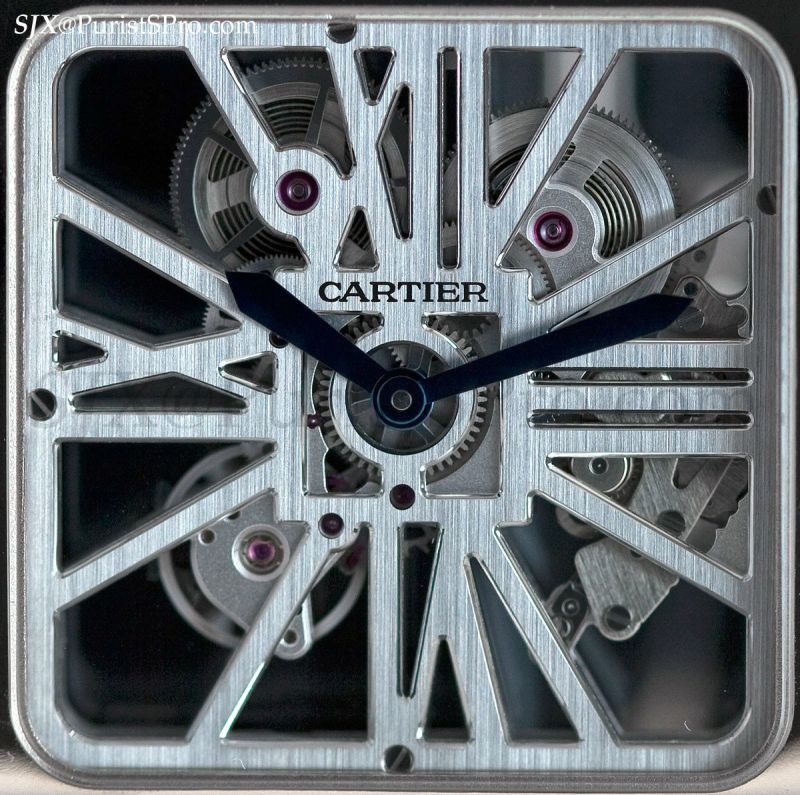 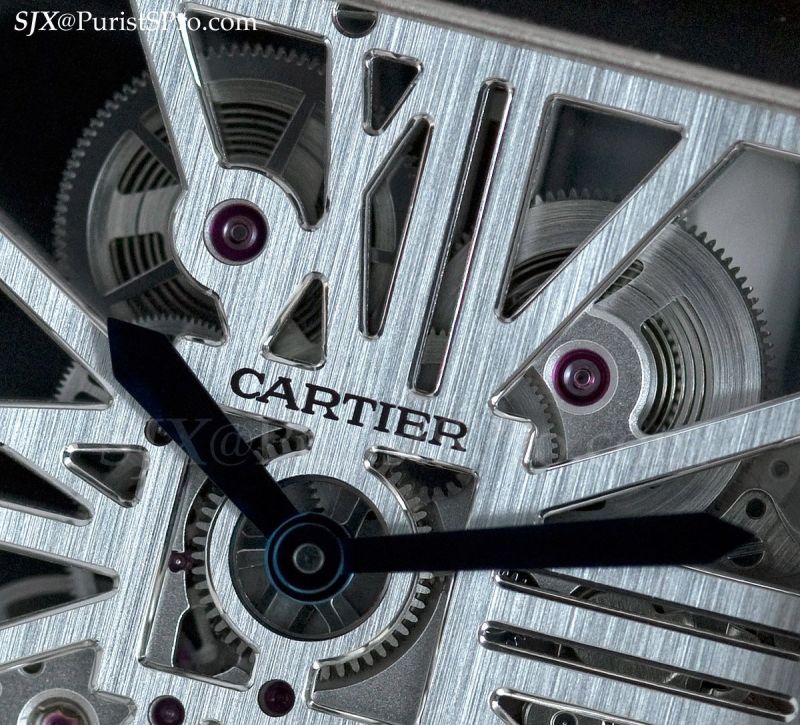 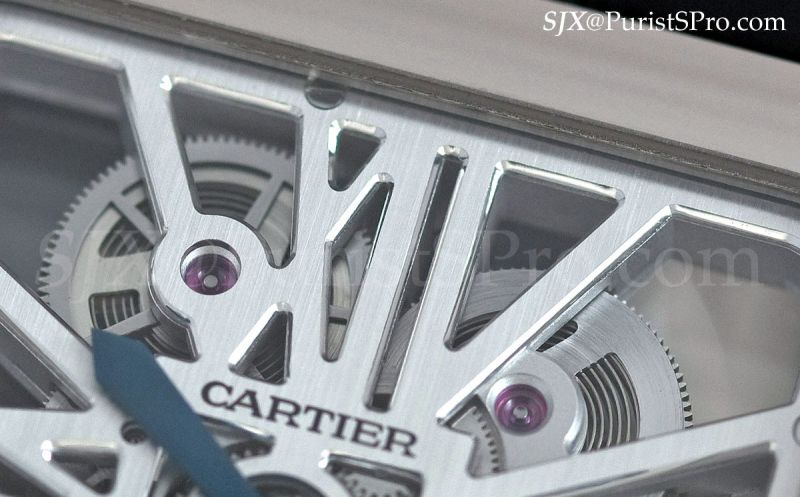 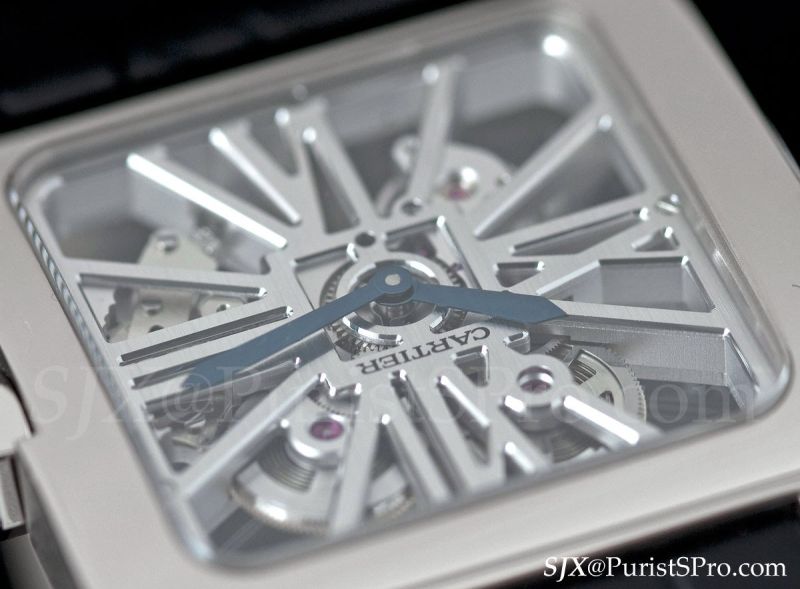 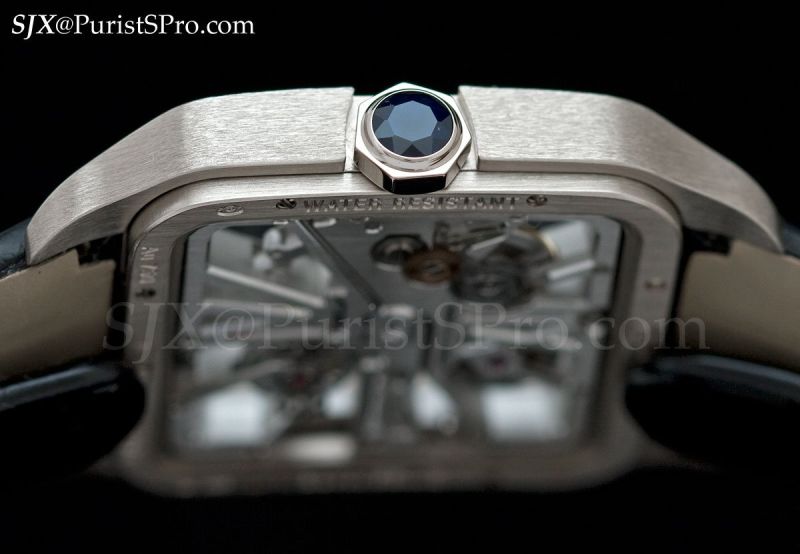 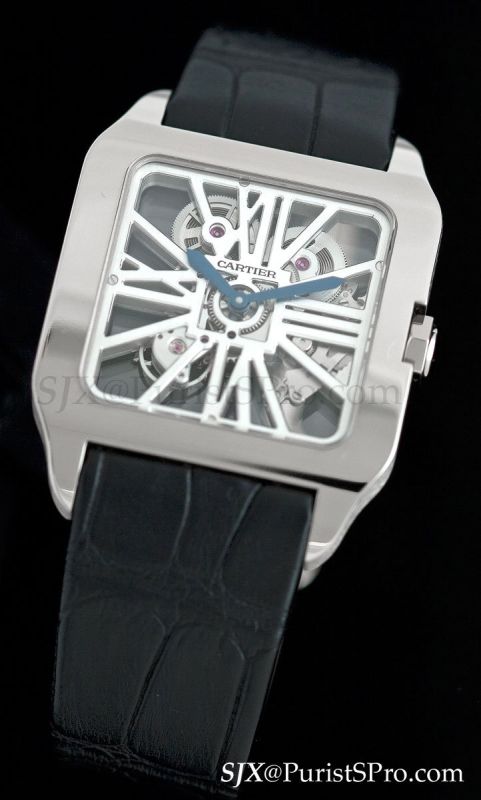 I'm not a fan of big watches, but the pink gold is really beautiful.