Before I get into the tour information for this report, I'd like to spend a moment on the history of the Astron. It was Seiko's first quartz watch. Here is a gold version, as seen in the Seiko museum: 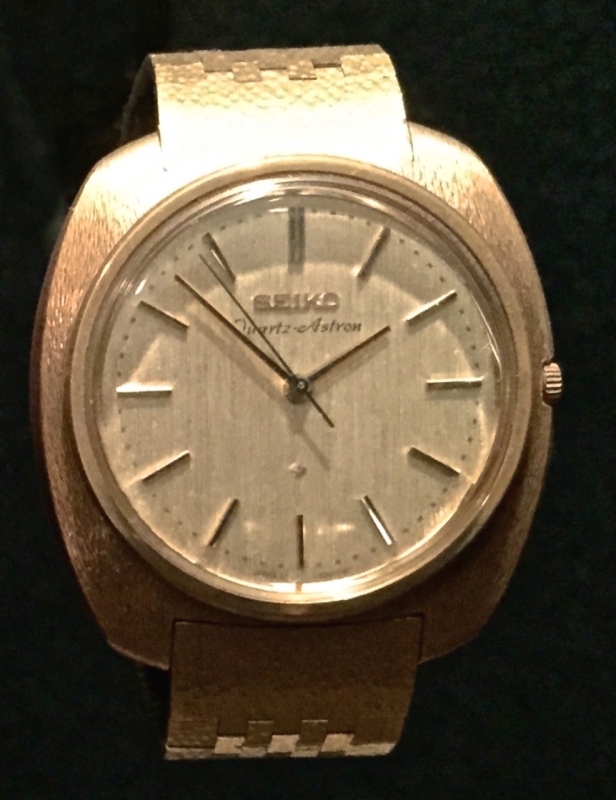 And here is my commemorative edition re-issued of the same watch - only here it's a ceramic/titanium case.
This is extremely difficult to photograph clearly, as it's curving in all directions and shiny everywhere the camera looks.
Notice the finely textured dial, which appears completely flat and shiny in most photos. 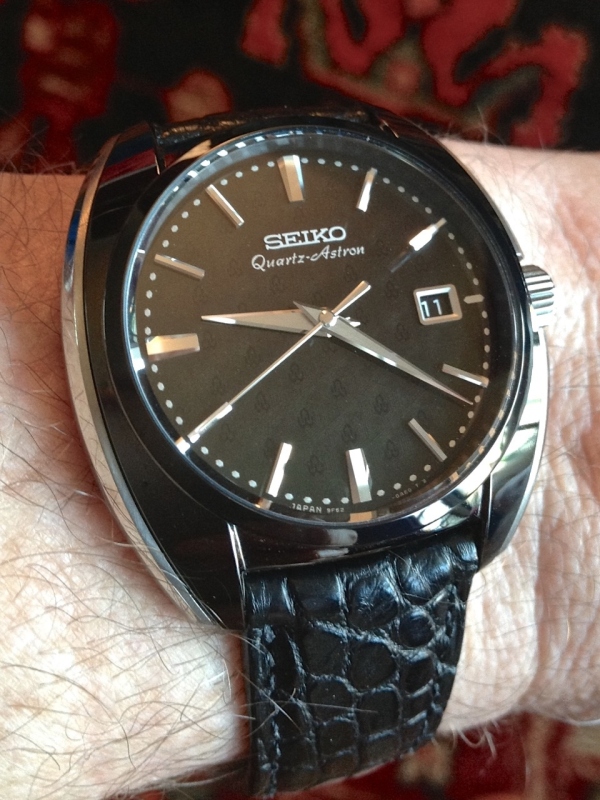 Sometime in the last decade the Astron name was moved over to represent a new generation of watch.
The "NEW" watch which uses the Astron name does have a quartz movement, but it relies on a new technology for its accuracy - satellite GPS updating. I've posted before about my GPS clock setup, but pardon me while I provide another photo for newcomers. My ESE-185A master clock looks like this:

The top unit is the GPS clock, which reads out the day hour minute and second, within 10 ms of official time. It provides what is called "legal time" a record of which is required of radio and TV stations, power plants, etc. in case of "wardrobe malfunctions" or worse events like nuclear meltdowns.
The bottom unit is simply a larger display which can show the date (March 14, 2011 shown here), the time or other information. I have multiple display units around my house so I can set clocks and watches consistently and accurately.
Here's the inside of the clock, with the 8-satellite receiver circled. 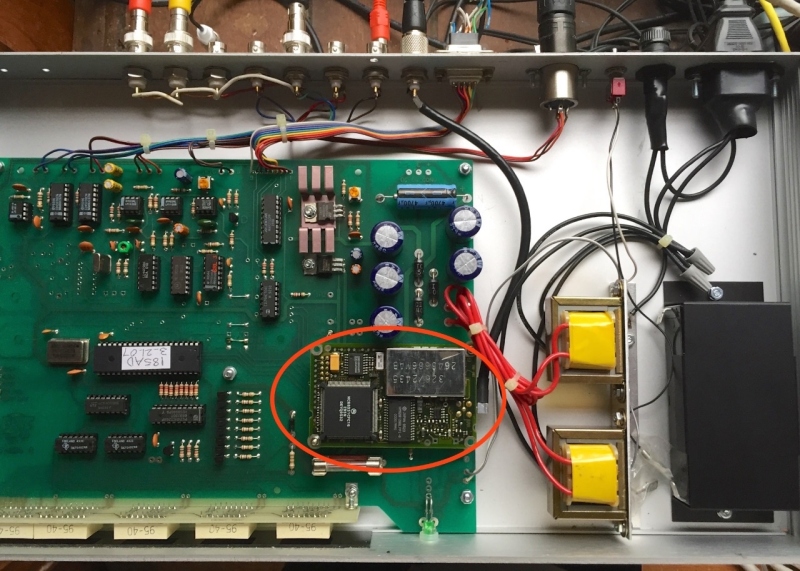 The following picture is its antenna. 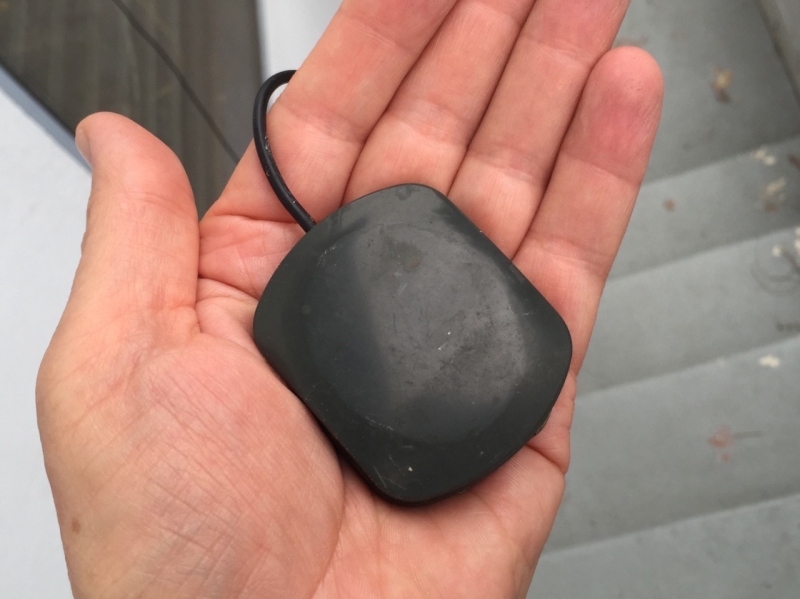 Now we can look at the comparable technology in the Astron watch. Antenna plus receiver and power supply. 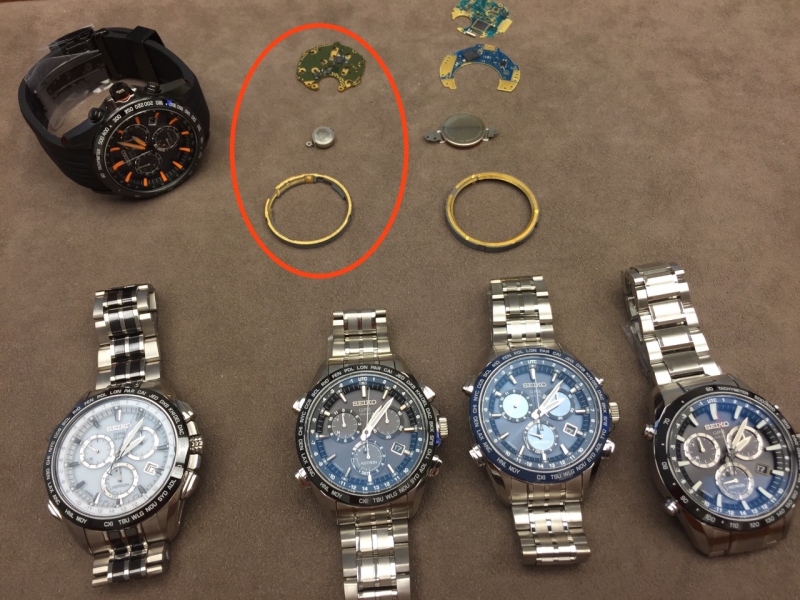 The new watch is circled, and the previous edition's components are on the right top. The watch itself is solar-powered, collecting light that comes through the dial's face. It can reset itself anywhere in the world (assuming you are outdoors) and select the correct time. In addition some of the watches are also chronographs. Here's a new limited edition, ceramic/titanium white-dial chronograph with my Sportura Kinetic Chronograph. 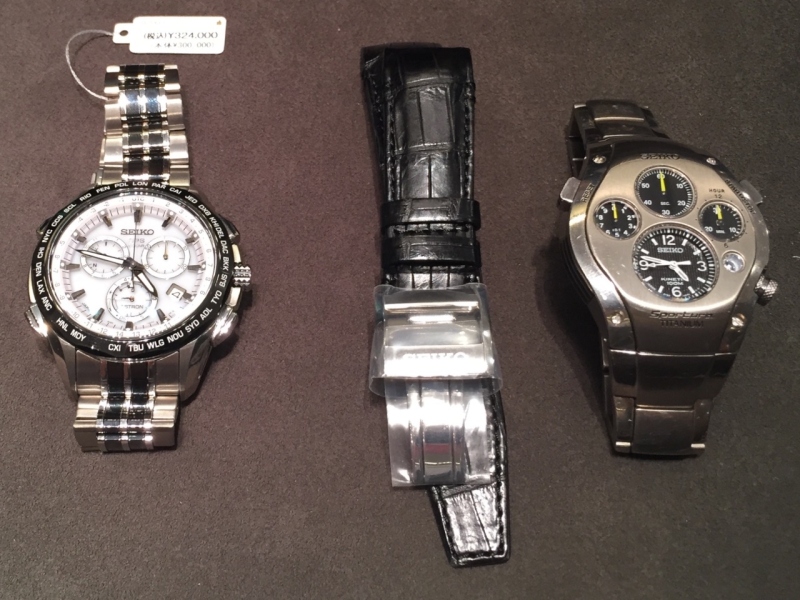 This watch gives Seiko Epson a chance to demonstrate its values: COMPACT, ENERGY-SAVINGS and HIGH PRECISION. And they have a stunning array of choices for the customer. Here is the case at the Narita airport duty-free shop:

(I wanted to buy the Seiko logo chopsticks, but they said I must buy a Ltd Edition Astron to get them ...)
As you can see from the photo above with the circuit boards and antennas, we did have some conversation about the Astron. And I walked past one of the assembly lines - watching the almost-entirely plastic movement be assembled very quickly by the Epson robots. It's plastic because that gives much better performance and reception. Now they are concentrated on making it easy to assemble, smaller, and less expensive.
We were asked not to take any pictures of this assembly line. But here's the hallway alongside it. 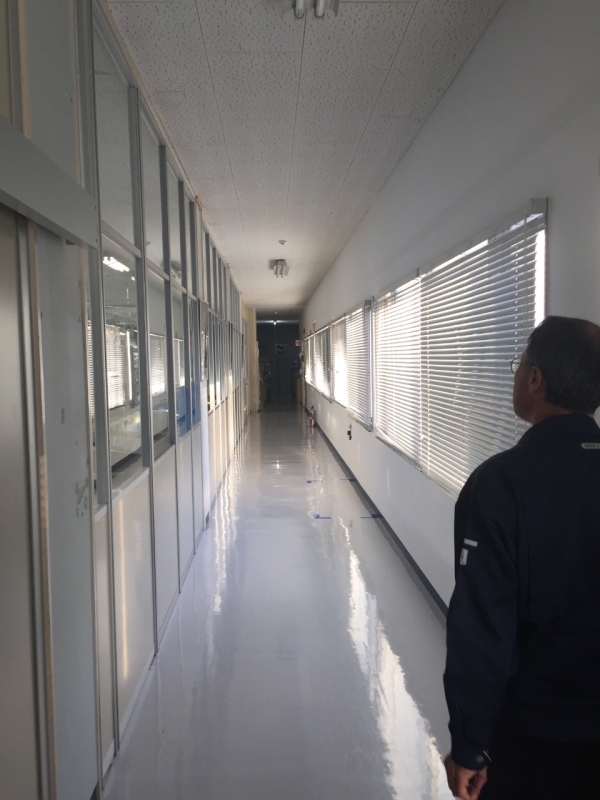 JEWELRY WATCHES
To finish our tour of the Shiojiri plant and the Shinshu Watch Studio, we went into the jewelry section. Here they use old-fashioned brazing torches to assemble gold and platinum watch bracelets. 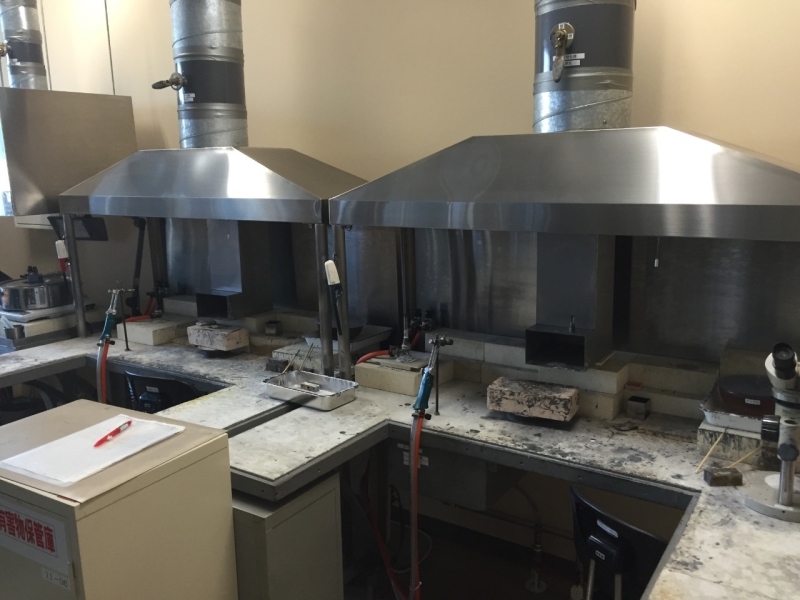 Here a craftsman is working on gold link bracelets. 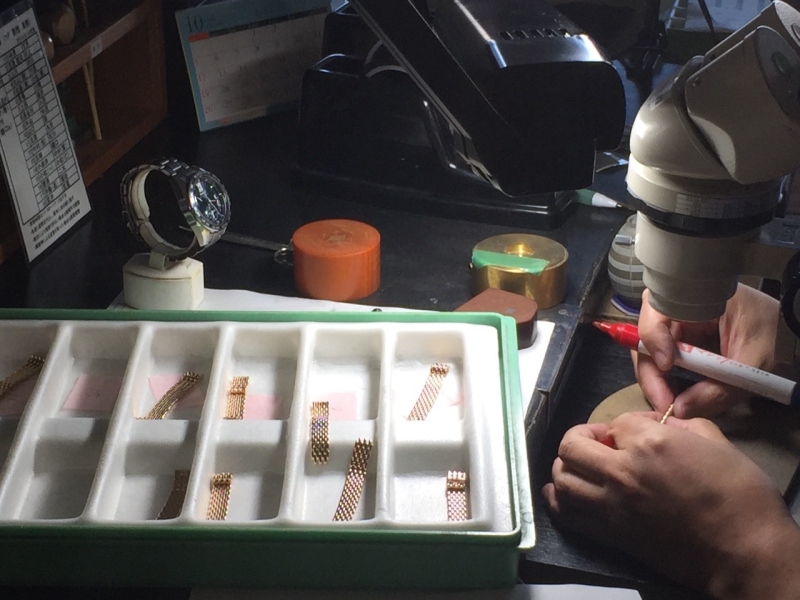 The bracelets have to be brazed to the cases, and the jewel setting requires drilling and shaping the gold. 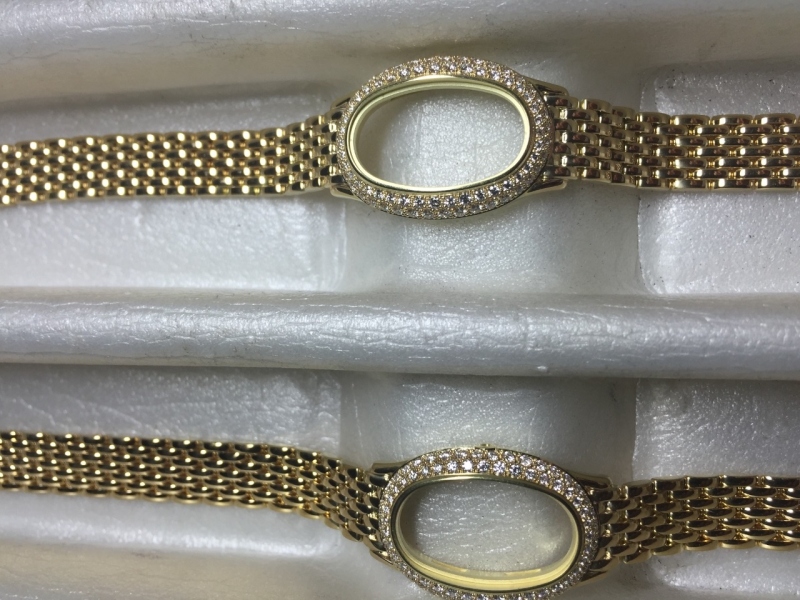 Here they are putting in the diamonds. 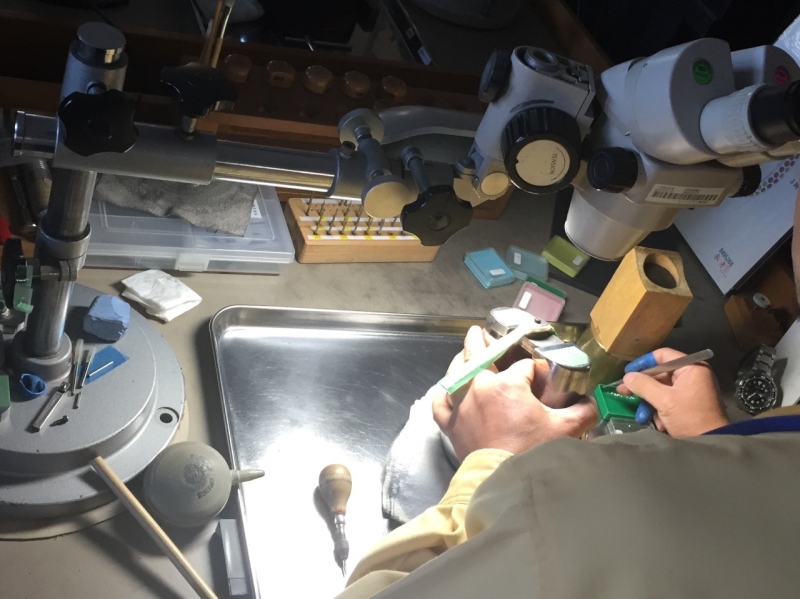 This tray has a special Credor movement that is in the middle of its jeweling process. 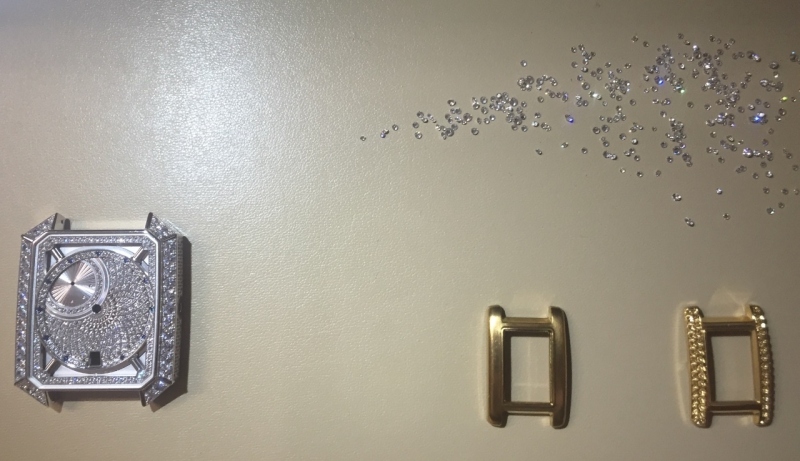 Remember that all these watches will be quartz, as the Spring Drive movements are too large and the mechanical movement watches (decorated or otherwise) are made in Morioka. 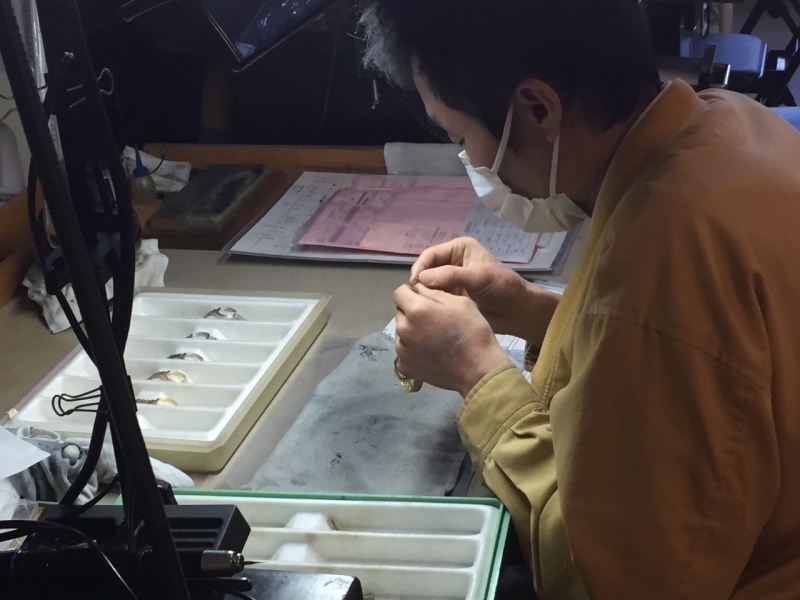 That concludes our tour of the Seiko factory studios.
If we can muster the strength, we'll conclude with a summary report with our overall impressions of the Seiko operations and our visit to Japan.
Cazalea
This message has been edited by cazalea on 2014-10-20 12:45:58
login to reply
Comments: view entire thread

By: cazalea : October 20th, 2014-10:23
ASTRON Before I get into the tour information for this report, I'd like to spend a moment on the history of the Astron. It was Seiko's first quartz watch. Here is a gold version, as seen in the Seiko museum: And here is my commemorative edition re-issued ...
login to reply

By: KIH : October 21st, 2014-22:12
.. is one of the milestone in the watch history - for good or bad. But, technology tends to evolve and that's life. It was, however, great that Swiss industry came back on feed stronger than ever, and Japan has got one step behind in the mechanical watch ...
login to reply