The purchase of my Tiffany & Co. Submariner ref. 5513 has made me investigate a bit about the Rolex Sports models double signed by the NYC retailer.

Tiffany & Co. is a U.S. jewelry and silverware company founded by Charles Lewis Tiffany and Teddy Young in New York City in 1837. The store initially sold a wide variety of stationery items, and operated as Tiffany, Young and Ellis in lower Manhattan. The name was shortened to Tiffany & Co in 1853 when Charles Tiffany took control, and the firm's emphasis on jewelry was established. Tiffany's flagship store (since 1940) is located at the corner of Fifth Avenue and 57th Street in Manhattan , New York City .

The Tiffany & Co. Rolex are “ordinary” Rolex (i.e. with no technical specificities) with the retailer’s name added on the dial. Apparently, the marking was sometimes done in NY “by a watchmaker with a pencil and paint”, sometimes by the dial manufacturer under the control of the New York City store

There are not many information available about these watches, but here’s what I have been able to put together…

In the early 1960’s the marking is still the same, like on this Explorer reference 1016:

In the mid 1960’s, the Tiffany & Co. marking becomes different, with a somewhat thicker font like on this Submariner ref. 5512 (Photo BJSOnline):

In the 1970’s, the markings seem to become more “standard”, like on this Submariner with date ref. 1680 (Photo Andrew Shear):

In the seventies, some rare birds have obviously been issued: here are several examples of Red Submariner ref. 1680 and Double Red Sea Dweller ref. 1665, with a Tiffany & Co. marking that may be either white or red (Photos Forstephan):

And a “rail dial” Sea Dweller ref. 1665, with a very odd and tiny marking (Photo Forstephan):

A more important number of watches has been issued in the “sapphire era” until the early 1990’s. These watches can more easily be found with the original box and papers. The box is a specific light green box and the papers bear the name of the retailer.

In conclusion, we can observe that almost every Rolex sport model has been retailed by Tiffany & Co.;  there are important variations of the font type used for the dial markings over the years, which makes the expertise of these watches very complicated.  As usual, the collector looking for such a watch must focus on the provenance, although this might be difficult for a vintage piece.

I would be happy to have more informations about these watches, so feel free to add your contribution.

By: LiL : December 8th, 2008-05:20
Tiffany for the rest of the watch's lifetime ? Since all the Tiffany jewellery is given that priviledge.. i assume it extends to watches :o)
login to reply

Wow, didn't know that, my friend.

Tell me, is this co branding that interesting in a Rolex Collection?

Best, and thanks for your great work, once again, Jeff.

and very sexy pieces in my eyes ;-)

But it 's difficult to say yes to so many appealing watches...

Thanks, Dr. Strong for giving us very exciting informations

with Tiffany on the dial?

I feel that I have a Rolex virus. This pieces are really keepers.

I hope to have something so one day.

. . . adorning the wrist of a gentleman seated next to me at the local tavern, which sparked a half-hour conversation . . . it was of early 80s vintage on a Jubilee bracelet, and I would have made inquiries into it's availability if it hadn't been for the watch being a gift from a close friend . . . cordially, Art
login to reply

Does anyone know how many Rolex/Tiffany were produced?
tks
Michele
login to reply
By: jd0lzz : April 17th, 2010-15:06
My father just recently gave me his '86 Rolex Submariner with a Tiffany Dial.  I have the original box, and the original sales receipt from Tiffany's,   The problem I am having is, although I know it exists, I cannot find the original Rolex Certificate.  Does anybody know if thas means that I am going to have a hard time with displaying provenance for this watch?  Does anybody think that Tiffany's will be able to help me out with this matter?  Any suggestions would be wonderful. 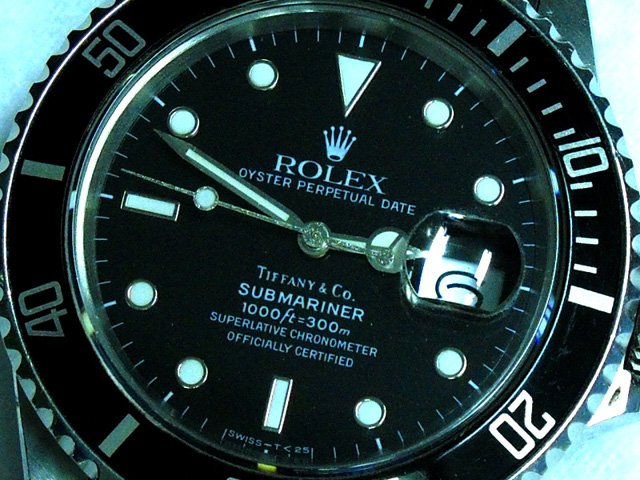 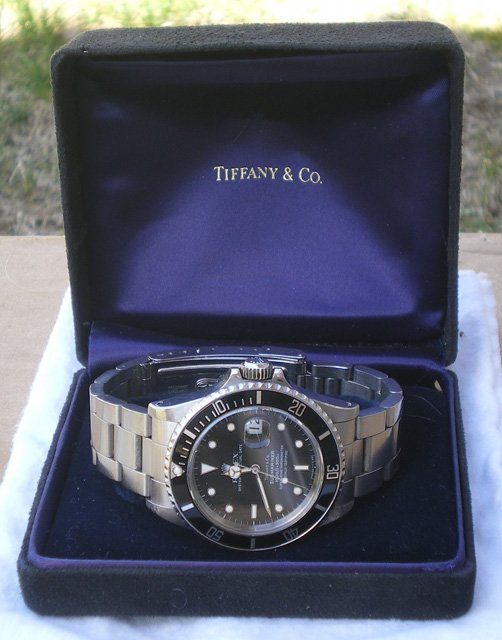