By: Horo_Traveler : October 17th, 2020-16:40
While I appreciate the movement, this one left me somewhat cold. It has an oddly modern vibe to it, perhaps because of the sapphire crystal and ceramic bezel, and I don’t like the proportions of how the bracelet and case work together. I know it is a faithful reproduction, but perhaps I need to try it on a strap to see if I can warm up to the look of the watch.

Or it could just be because Omega have diluted their “Moonwatch” brand with too many variants, special editions, etc., that this release didn’t really feel special like I thought it would.

Just my initial thoughts, I may grow to like this over time. The complete opposite to what I experienced with the Apollo 11 50th Anniversary “Moonshine Gold” release, which is one of my favorites in my collection. It too has sapphire and ceramic, but has a much more charming look to it.

By: MichaelC : October 17th, 2020-17:21
Maybe you will grow to love it?
I have an option on this watch.  But I have a regular Moonwatch and quite like it.  From an aesthetic standpoint, I think the regular bracelet looks much nicer.  Dial, I like details of the EW.  But worth it to change?  Not sure yet.  I certainly don't need one of each, and lean towards keeping the one I have.
login to reply

By: Chronometer (aka yacomino) : October 17th, 2020-17:40
However interestingly enough I find this version of the bracelet quite beautiful.  Hope you enjoy it
login to reply

By: Horo_Traveler : October 17th, 2020-18:24
That combined with the shape of the case creates an odd look on my wrist. Individually, the case and bracelet are nice, but it is a matter of taste, they don’t come together well for me.
login to reply

By: Pun : October 17th, 2020-19:34
The watch itself is very well made, my only gripe is that the price is very high. Omega could have made it few thousand less expensive and then.....
login to reply

By: Clueless_Collector : October 17th, 2020-19:45
Especially at the clasp area. I prefer some tapering but I see your point about it being a little thin, like the Apollo 11.
Congratulations, looks like we have couple just in these few days, awesome to see them coming along.
login to reply

By: Age_of_Surfaces : October 17th, 2020-19:57
Omega has produced countless versions of these watches for five decades in every conceivable permutation. It has then taken many of these permutations and spun them out more than once with negligible changes touted as distinctive features. The current Snoopy watch is the third in 15-20 years and we are supposed to believe the CEO of Omega who spoke of the brand's commitment to "innovation" at its launch. I'm afraid this is absurd and should not pass the giggle test among a discerning audience.
For me, Omega represents the classic watch. The first watch I remember my father wearing was an Omega. I have another one now - I've been wearing it this week in fact - and I bought one for my wife's 40th birthday. But it is also true that when brands have a cash cow they milk it and milk it to beyond saturation point. The Speedmaster reached that point about 30 years ago but, just in time for Omega, a new generation of watch buyers reached a purchasing age.
The most tragic part of all of this is that the Speedmaster forged its name as a performance watch. By the 2010s, Omega was avoiding independent performance trials because it did not want to lose to competition (trials won by Breguet and Tissot among others). That's what happens when a brand becomes primarily about heritage; it no longer believes it is in its interest to compete. In a way, it is right, because people keep on buying the same watches, year after year after year.
login to reply

By: Horo_Traveler : October 17th, 2020-20:37
I believe brands are in a difficult spot and I empathize with them, but Omega has a particular virulent form of special editionits, which is in fortunate as it casts a shadow on their truly special pieces.

Still, my issue with the steel 321 is personal. It has to do more with the looks. It is my understanding that this is a faithful reproduction of the “Ed White” with the sapphire and ceramic nods to more modern innovation. Hence, I don’t see this as an Omega mistake, just me not warming up to the package.

I don’t want to discourage other 321 lovers from ordering one as others’ tastes may be different than mine.

By: holdemchamp1225 : October 18th, 2020-03:09
The only difference is the alpha hands and patina on the dial of the CK 2998 that you showed in another thread. Everything else is exactly the same as the EW so I am curious since I know you prefer vintage over modern, especially with this type of watch.
Looking at your Rolexes, Blancpain FFs, etc...I would have to assume this is the case. You're just a vintage guy mon ami besides the watches that did not exist prior in any iteration like the Duometres, JLC MMR, Amvox, Reverso Septantieme, etc...
And there I can understand and appreciate that certain people would prefer to have the original versions due to charm, history, etc...
I think most people who don't get this NEW Ed White or cannot understand why it is a big deal might not understand the purpose of such a watch when they can simply purchase an original. I have 2 original Ed White Speedmasters but don't necessarily wear them for several reasons. This new iteration gives me the opportunity to wear a watch design I adore without having to worry about damage, fragility, water resistance, etc...
The hype train has caused this piece to be coveted and maybe for the wrong reasons. I am hoping that people who really want and see the point of this watch can purchase one and wear it as it was meant to be.
For me, there is NO better modern Speedmaster all things included (aesthetics, history, iconic status, modern updates and tech, warranty, etc...) besides the Moonshine which is why I label them 1A and 1B 😁😜
login to reply

By: Cpt Scarlet : October 18th, 2020-02:29
Would you take delivery of a watch that you basically don’t like ?. I’m sure that many others that wait patiently would have enjoyed it.
login to reply

By: holdemchamp1225 : October 18th, 2020-02:42
I go by the mantra, buy what you like regardless of hype or what people advise.
Did you even try it on prior to purchasing the watch? If so, did you also feel the same way when you tried it on? If you did and were initially hesitant, then why proceed any further?
I am biased in all this as I feel this watch is amazing in every way. Basically it gives fans who appreciate the original EW (looks, design, heritage, etc...) a worry-free way to wear a modern iteration with modern updates 🤷‍♂️
login to reply

By: Cpt Scarlet : October 18th, 2020-06:23
That’s not something that I assumed, if you review my post.
I hope that eventually you enjoy the watch.
Kind regards
login to reply

By: Horo_Traveler : October 18th, 2020-06:28
I purchased it for the movement and will try it on a leather strap. I’m hoping I’ll like it as I generally prefer my Speedmasters on a strap, with the exception of the Apollo 11 50th Anniversary release, which I prefer on the bracelet. That’s an interesting one as I generally avoid colored metals, but still liked it on a bracelet as it brings the look together without appearing blingy.

By: hoseachandra : October 18th, 2020-04:23
That if I have little hesitant about a watch in the beginning, the love will not last long and eventually I will sell it. Contrary to that, some watches that I sold, I regret it because it was a first love sight.

By: Horo_Traveler : October 18th, 2020-06:37
My experience was the exact opposite with the Apollo 11 and EW. The Apollo 11 has a narrow bracelet as well, but the look worked on that watch for me.

This shows that Omega were right about releasing both pieces as they appeal to different collectors.

By: massimiliano : October 18th, 2020-06:06
As for the Speedmaster 60th anniversary, switching from bracelet to a leather strap gives you a completely different feeling of the watch

I simply prefer other than the metal bracelet (apart my twenty years old Sea-Dweller)
Take all the time you need: at the and, you always can find another home for this great watch.
Best, massi
login to reply 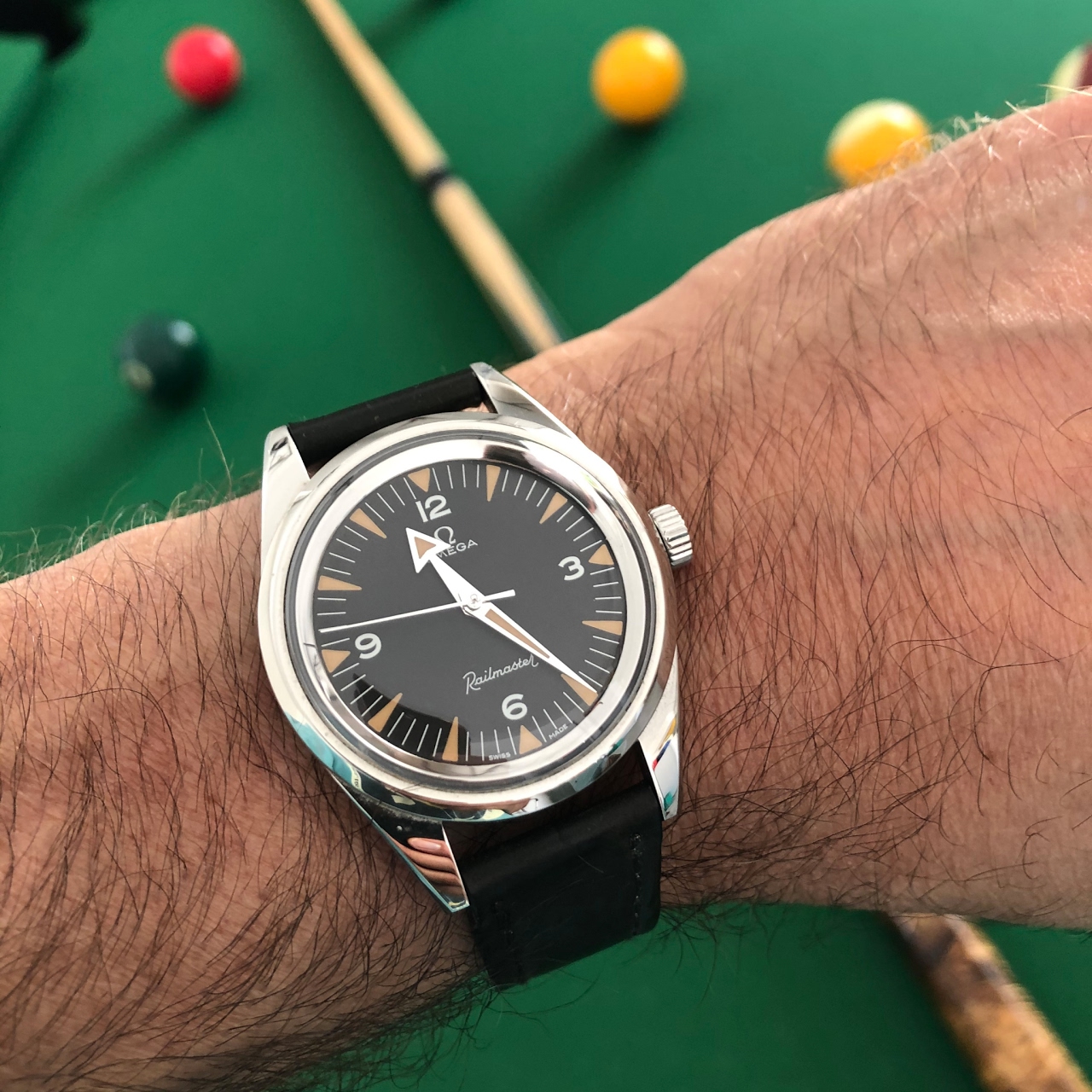