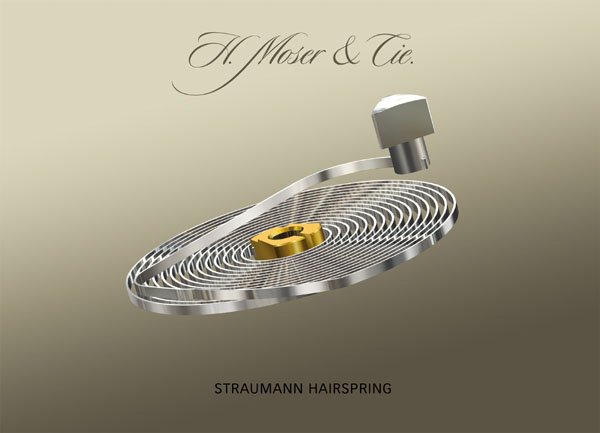 Once again, a great sensation at the heart of all Moser watches

Two years ago, when the first interchangeable module with a Swiss lever escapement was introduced in the watches of H. Moser & Cie, it attracted considerable attention. The exclusivity of this horological solution is represented by the escape wheel and pallet fork in solid gold, adjusting screws on the balance instead of an index, and a completely novel stop system for the lateral gold pallet fork – the list of special and exclusive features could continue.

This year, the passion of the Moser watchmakers goes straight to the heart of the oscillating system: the helical spring.

Its consistent oscillation in combination with the balance ensures the even running and the accuracy of the watch. The Moser development engineers have devoted to it the high degree of attention that it deserves. Working closely with its associate company, Precision Engineering AG, and drawing on the know-how of Institut Straumann AG, the original formula and technology of the legendary NIVAROX material have been reviewed over the past five years. It was Prof. Dr. h.c. Reinhard Straumann – the grandfather of our present Board member, Dr. Thomas Straumann – who in 1931 developed a fracture-resistant, self-compensating, corrosion-free and antimagnetic alloy consisting of seven elements, and applied for a patent for this invention. The patent describes the first concrete formulation, which exhibits the desired characteristics and also finds an application in watches as a balance spring material. It is still in use today in slightly modified form in practically all volume-produced movements with a mechanical oscillation system. For many years, production of this material was supervised by Straumann in the interests of quality assurance. These responsibilities were assumed about five years ago by Precision Engineering AG, which has now installed its own production line, from melting of the alloy to the finished escapement system, working jointly with H. Moser & Cie.

The time has come: All escapement modules from H. Moser & Cie will gradually be equipped only with the Straumann Hairspring®. Starting with the new product for the 2007 exhibition, the “HENRY Double Hairspring” with a Straumann double hairspring escapement, and the already legendary “MOSER PERPETUAL 1”. In tribute to their inventor, the brand names Straumann Spirale®, Spiral Straumann® and Straumann Hairspring® now benefit from international protection.

The exact combination of all the highest-grade materials in the smelting charge, the processing of the raw ingot with a diameter of about 20 cm and a weight of 80 kg into a wire with a diameter of only 0.075 mm – thinner than a human hair – demand technological expertise and the best tools acquired over the generations. Yet only the final homogeneity of the wire and the ultra-precise rolling of the round wire into flat strip can provide the conditions necessary for balance springs that are sufficiently accurate for use in chronometers. The wire for the Straumann Hairspring® springs is thus flat-rolled to an astounding accuracy of 0.0001 mm, equivalent to 0.1 thousandth of a millimetre.

In spite of the fact that, or perhaps precisely because, our founding father Heinrich Moser had already coined the phrase, “to make the best watches in the world, you must go to the best suppliers” in the 19th century, we will not entrust production of the balance springs to anyone else. We stop just short of digging the necessary minerals out of the ground ourselves.