Comments:
By: ttwins : July 8th, 2012-16:14
I found this old Girard Perregaux Chronograph watch in a box filled with a variety of old watches. Any information on this watch would be greatly appreciated. The only thing I could find was a photo of a 1950's Brequet Type XX Pilot Watch that looked identical to this...the only difference was the name on the watch. Was this something that was commonly done in the 50's...two watch manufacturers producing identical watches? Thanks in advance for your help! 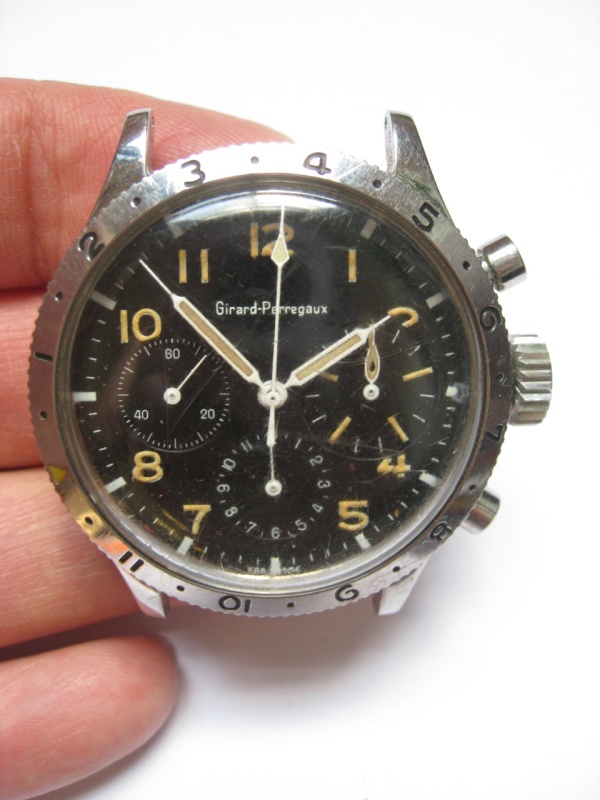 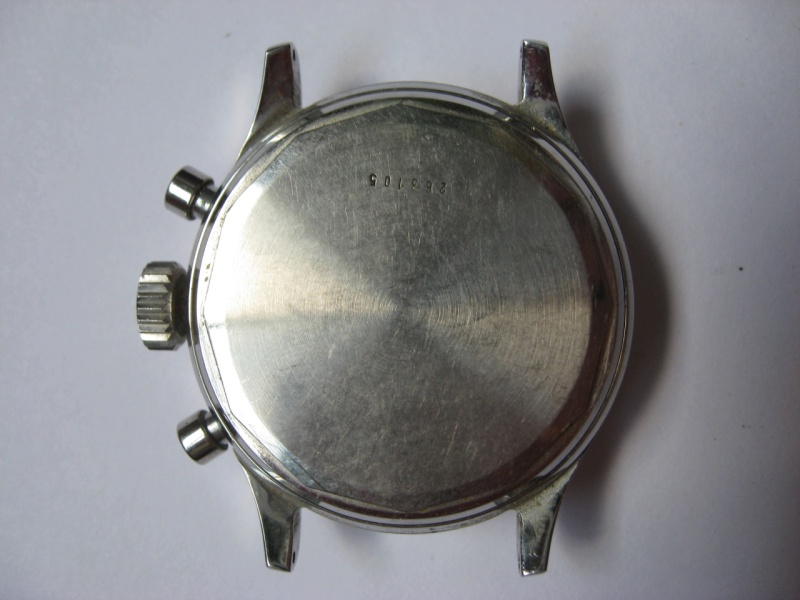 Yes, identical to the Breguet Type XX, but I know quite nothing about Vintage GPs.

Like you, I am curious to hear what the " conoscienti " have to say. 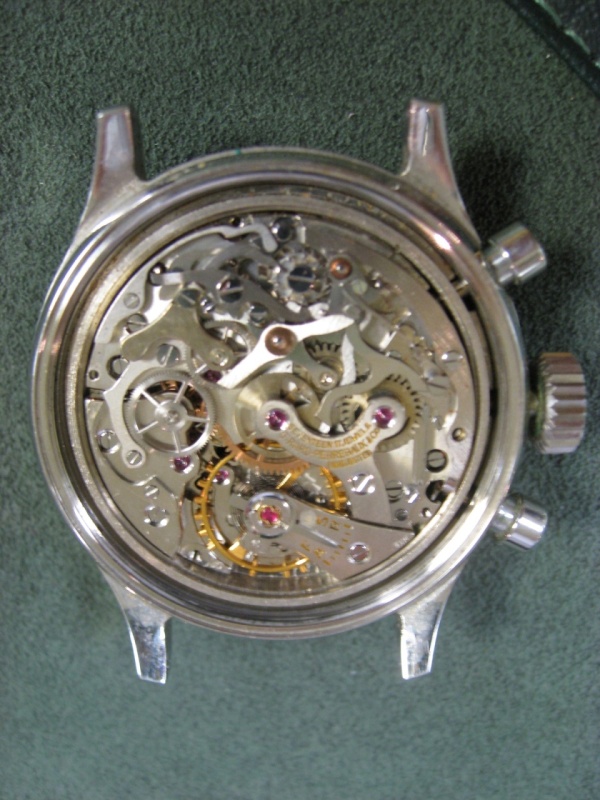 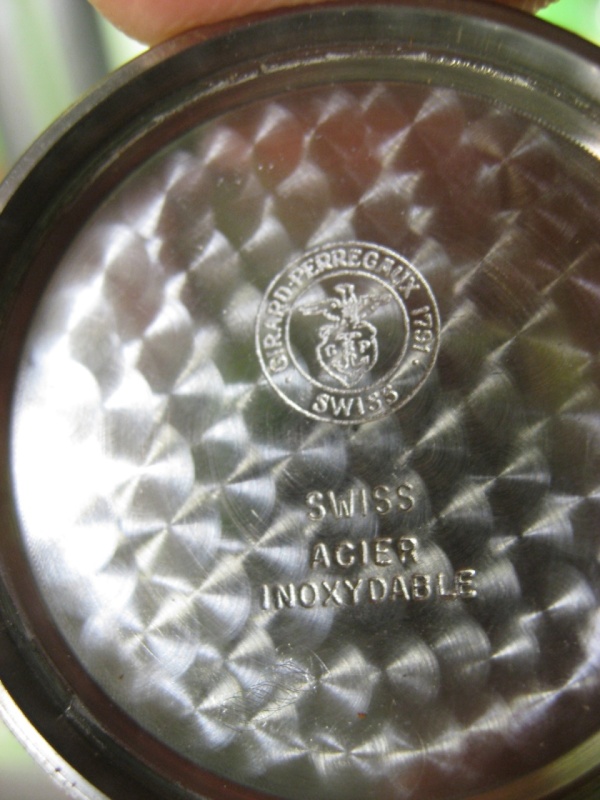 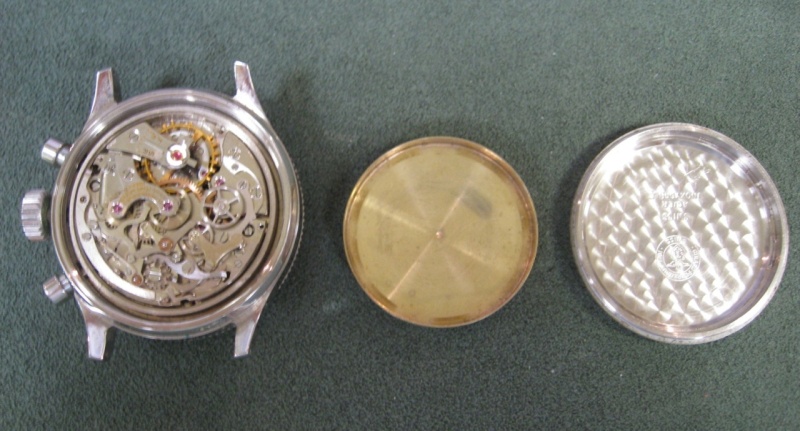 login to reply
By: ztirual : July 9th, 2012-14:48
I inquired about a similar but not quite the same watch in December last year and got help from one very kind fellow collector. He could not quite help me to track the history of my watch but he could document the history of your watch. What I learned was that your watch was part from GP late 60's collection, as illustrated in at least one of their catalogue from that period.
Mine, which is similar in design, is signed 3 times (dial/ inside case/ movement) plus an additional GP monogram on the movement. It has the very rare Valjoux cal. 720 with 'retour en vol/ flyback' chronograph function, as to be expected from a 'type XX' type of watch. Its case is particularly thick to accommodate that flyback function.  I do not know whether yours is also a flyback. There is another marked difference with your watch regarding the 3 o'clock minutes' sub counter. The pity is that GP, whose archives are far from being complete, could not help. A real shame...
I' hope that you will get more answers from the GP experts on this forum.
Best
Z'
Here is a picture of my watch that I posted earlier on Watchprosite. I absolutely adore this watch.

login to reply
By: ztirual : July 9th, 2012-15:22
On the movement, am I right reading 'seventeen 17 jewels Girard Perregaux & Co unadjusted' (all upper case)? Mine has just one additional line below that reads 'Swiss'.
May I ask you to check whether the movement bears the same inscriptions as mine at the bottom of your picture, i.e. below the balance. From right to left mine reads as follows: GP monogram/ '720' (cal. 720)/ Valjoux' monogram.
Judging from your picture the GP monograms on the case back are similar on both watches, perlage is bit less clear on yours but that might due to the relative lack of sharpness of your picture, the inscription below the monogram is inverted on mine, as it reads Acier inoxydable Swiss, as usual, all in upper case. Btw mine is also protected by a dust cover.
I hope that it will be possible for you to check this. In advance, thank you.
Best- Z'
login to reply
By: ztirual : July 9th, 2012-15:43
Sorry for the scar in the middle of the picture.
My watch but not my picture. I had to erase the name of seller...
Best-  Z'
login to reply
By: ztirual : July 9th, 2012-15:44 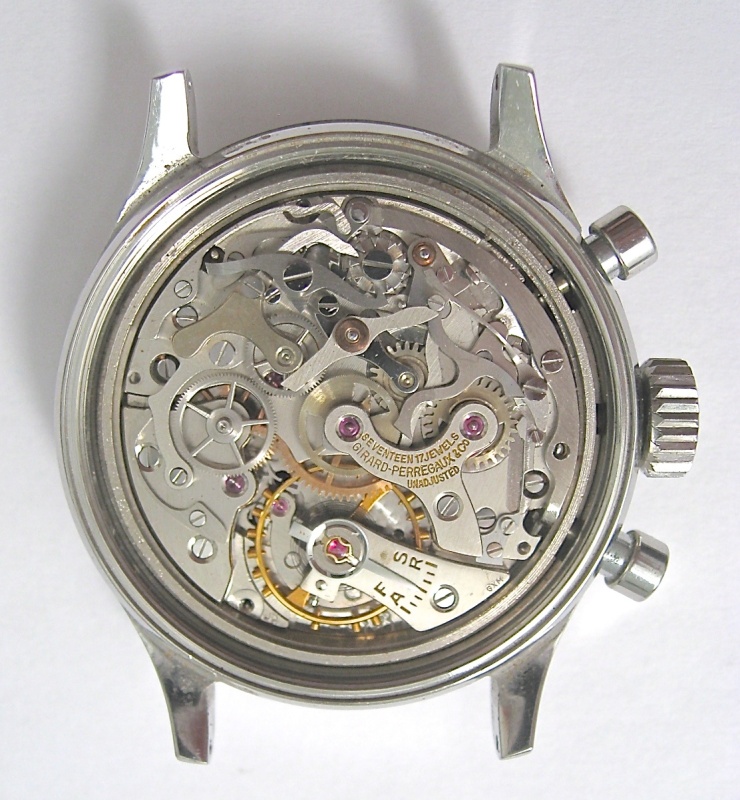 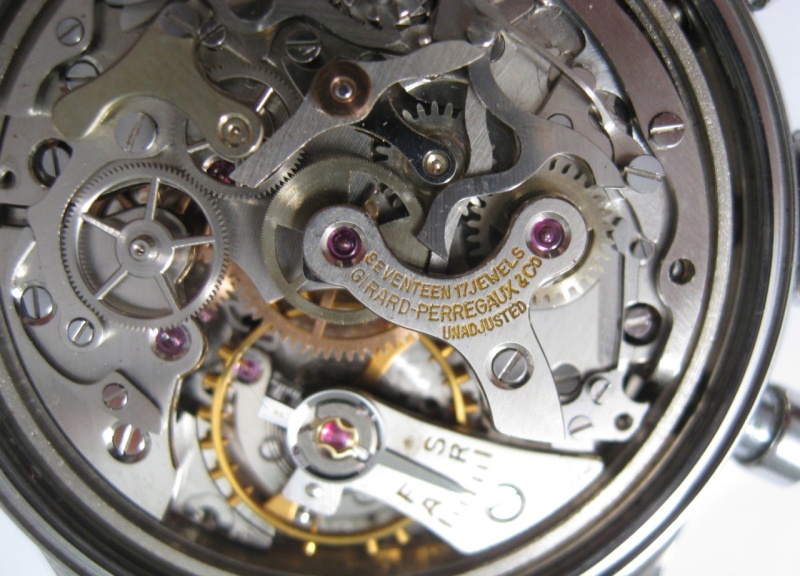 login to reply
By: ztirual : July 10th, 2012-11:18
Thanks for the better pictures. Alas I can't really see on your pictures whether there are similar inscriptions beside the balance just as on mine.
We never discuss the value of watches on this forum. This forum is for exchanging ones interest/ passion for watches not to gain knowledge on their mercantile value.
Let's say that is a fairly rare watch. Value is subject to the demand and the demand is greater for watch in top condition.
Best- Z
login to reply
By: ttwins : July 10th, 2012-11:33
Thanks Z for checking out my better photos....my watch isn't running at this time but I showed it to a watch repairer and he said it looks really nice inside and probably just needs a basic cleaning to get it operational.