As mentioned, for the last year I have been working the Girard-Perregaux Olimpico Chronograph theme and I am now finally ready to put the first post dedicated to the 1976 Olimpico online!

This part #1 will be dedicated to the Olimpico Chronographs 9238 FA. 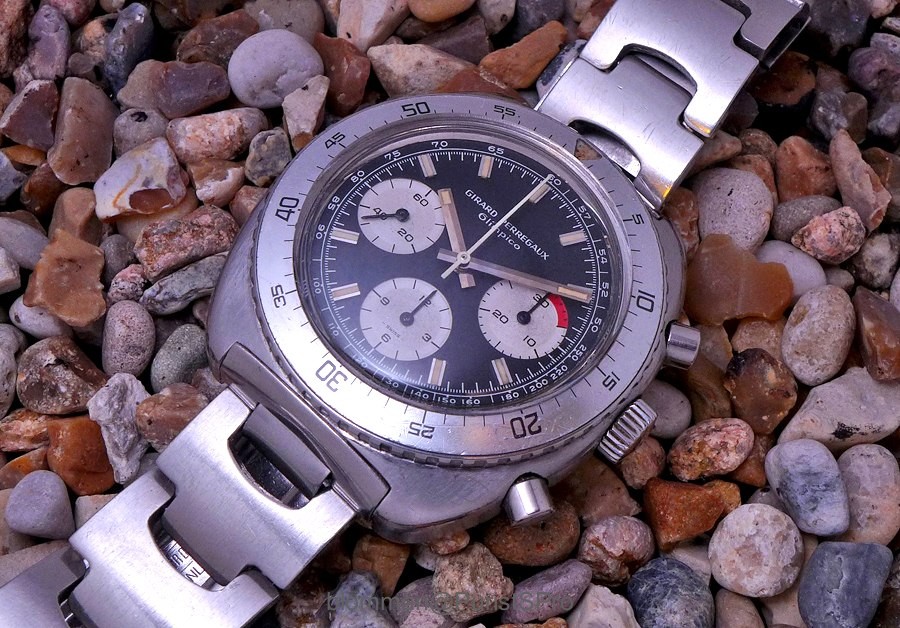 For me the 1976 Summer Olympic Games is a bit special to me since this is the first Game I remember seeing on television!

The big news was of course the only 14 years old gymnast from Rumania Nadia Comăneci.

She returned home with three Gold medals including the prestigious All-Around program gold. 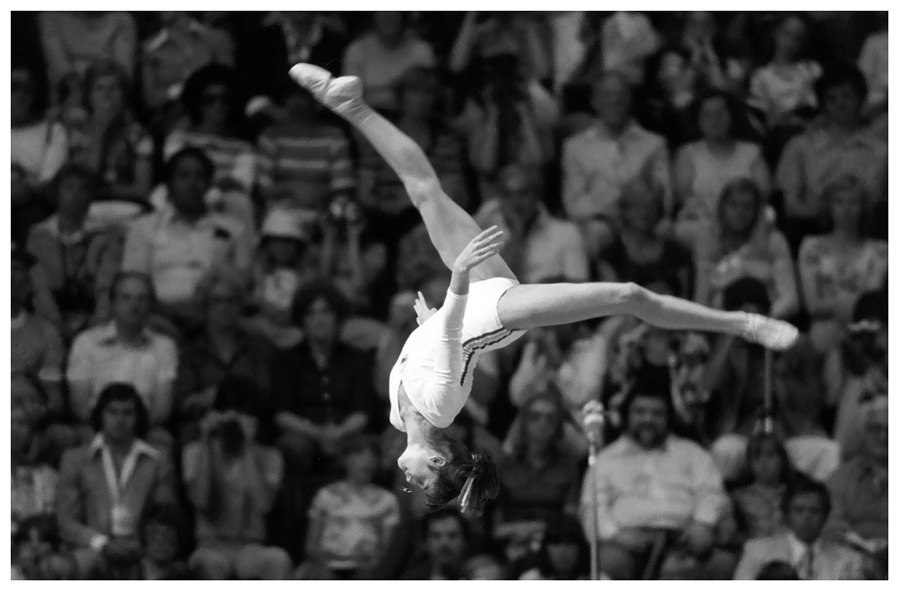 The game was held in Montreal, Canada, the first Olympic Game to be held in Canada.

The big winners of the game were the old Eastern bloc, Soviet Union 125 medals and East Germany 90 medals. 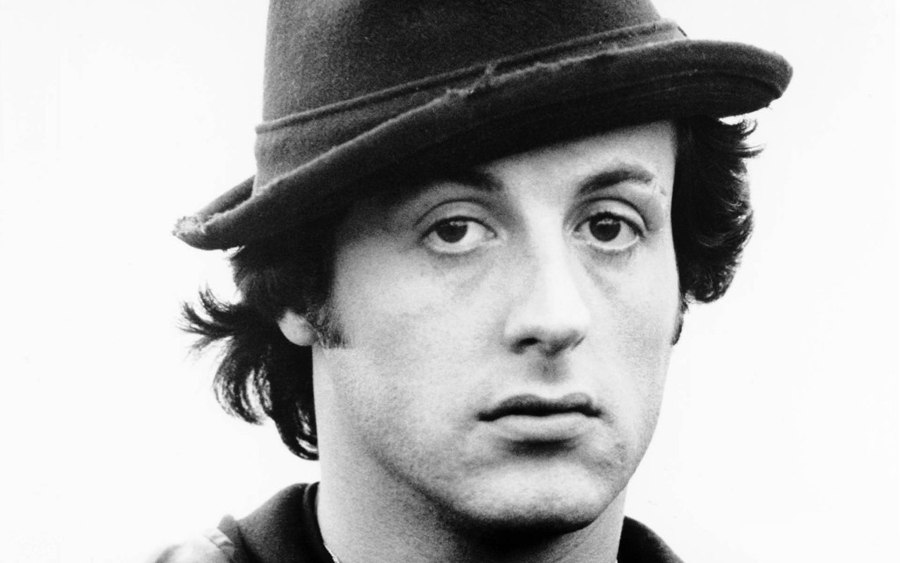 And Clint Eastwood directed and played in the Outlaw Josey Wales.

The cover is MichaelC’s avatar here in the forum: 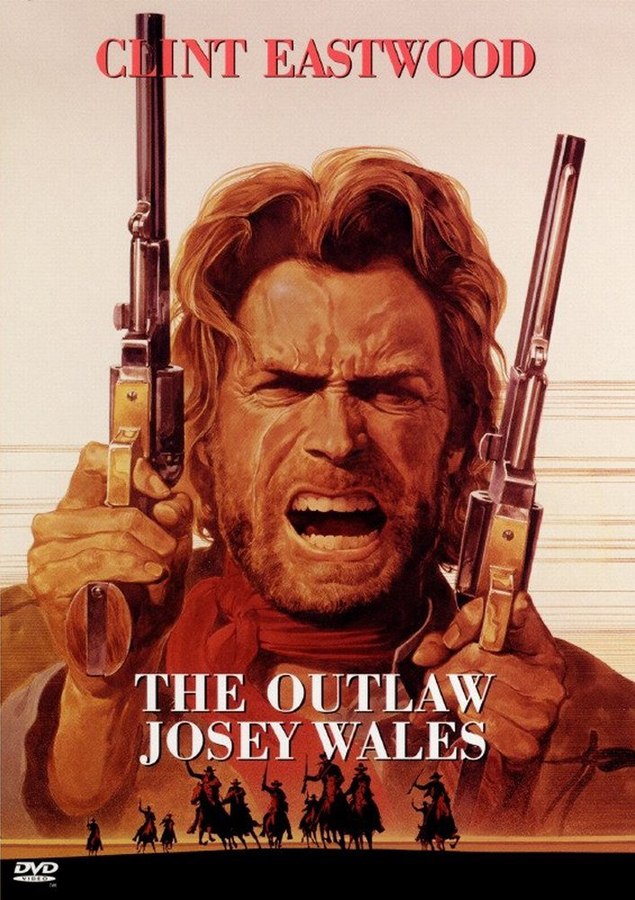 Yup, a lot of childhood memories….

But let’s have a closer look at the watch. 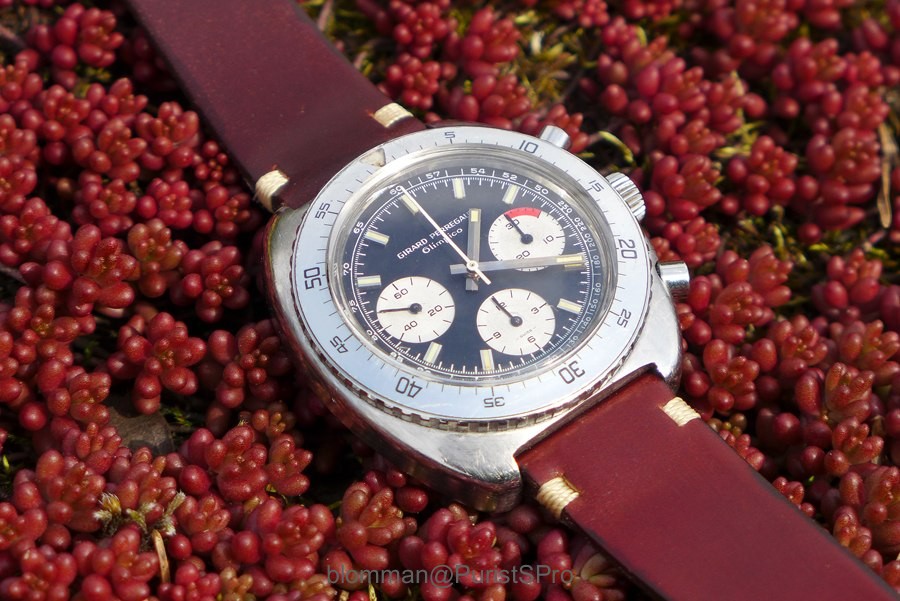 They are big and bulky with typical 70’s design!

The cushion shaped stainless steel case is 42 mm across and 45.5 mm lug to lug.

Big doomed crystal and screw down case back. 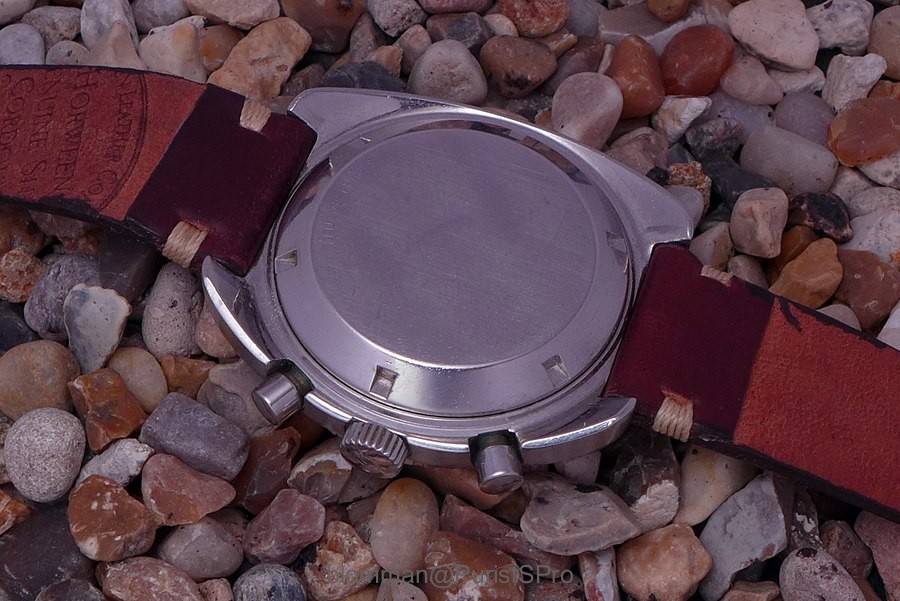 If I am correct, two versions existed: black dial with metal color bezel and white dial with black bezel (I have not been able to verify the white version).

Mine is the black dial version with the metal bezel.

Classic 12 hours chronograph layout of the dial, running seconds at nine, chronograph minutes at three and hours at six.

Sub-dials are white to give the watch the “Panda” look.

Tachymeter scale 50 – 250 outside the minute track.

Applied luminous indexes and luminous material on the hands as well.

The red mark of the first five minutes on the chrono gives the dial just a splash of color. 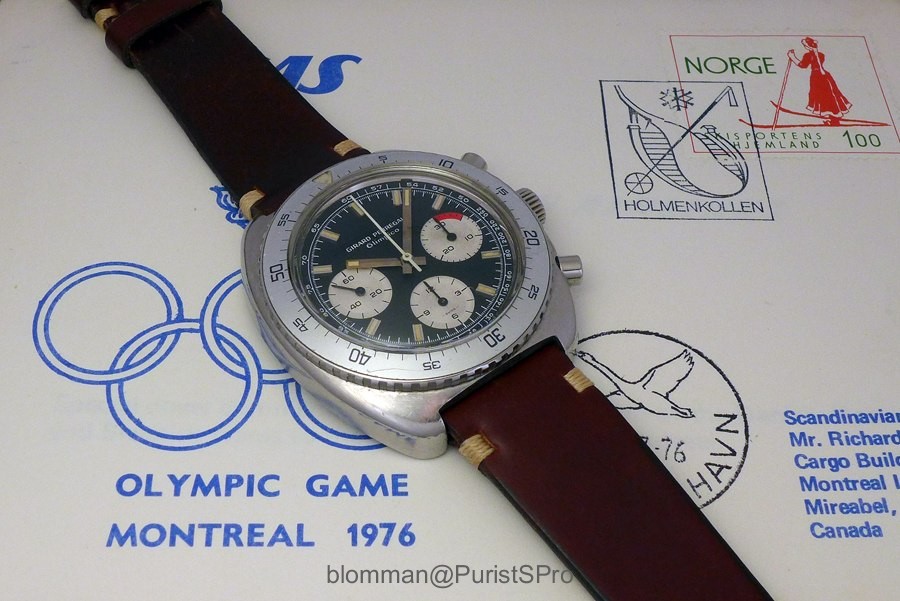 The pushers are located well into the case side for protection and support.

Minimizing the risk of breaking them or get stuck in something.

In between is nice proportioned crown, easy to operate due to the size. 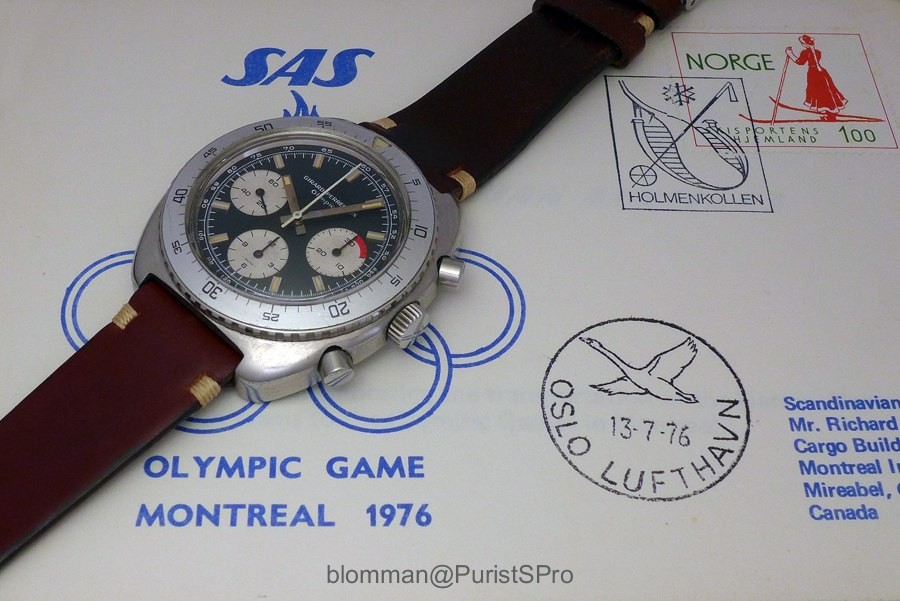 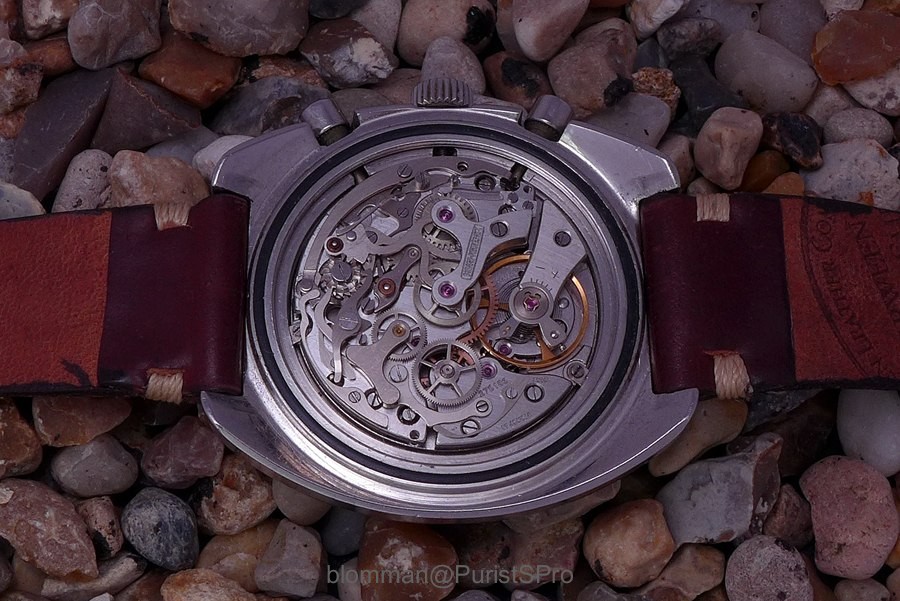 Here is an identification sheet of the Valjoux 72: 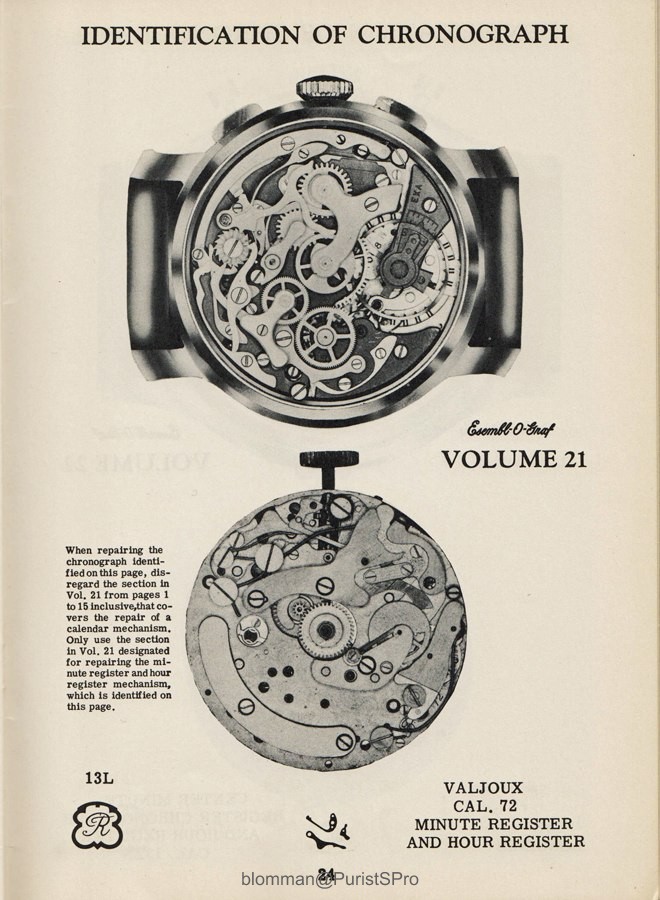 And on the wrist…? The sky is the limit! 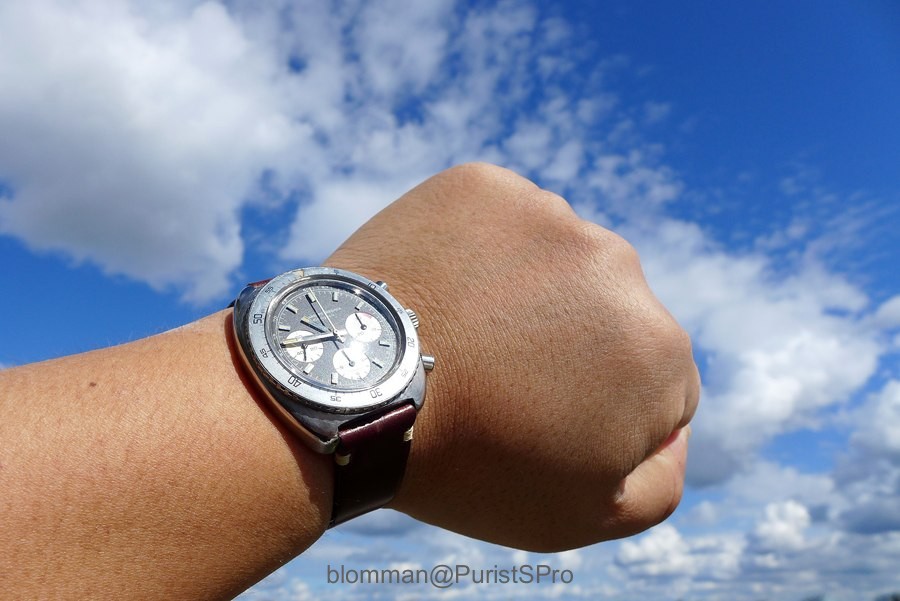 As many of you may know, I really like the Funky 70’s design and this is no exception.

Even if quite big, the watch sits perfect on your wrist with a very nice presence!

Before I end this post: one common misunderstanding is that Girard-Perregaux only made one Olimpico reference per Olympic Game…

That is NOT the case!

Stay tuned, I will return to the Girard-Perregaux 1976 Olimpico Chronographs with more!

This 1976 version is very typical 70ies. I was tempted on the white dial version with black bezel (there is one for sale currently) but I would give priority for my first Olimpico either to an 8846 or an 9075, so that has to wait.

The Montreal Olympics, I don't recall watching much of them but at that age I spend my summers outside and with the time difference I was probably at sleep when most competitions took place. It did come back to me later when I was a young athlete myself and had a coach who actually went to the Montreal Olympics (he didn't win a medal though).

When you see them side by side you will fall for this one as well...
Promise!

I bet on the revival of those funky 70's lines: I think we will soon have new proposals based on them. After having sacked the design from the 30's, 40's, 50's and 60's, the major brand will unavoidably start re-launching, re-issuing, re-tributing, re-editing the 70's.

Now, the question is: who will be the first? Maybe, Girard-Perregaux? 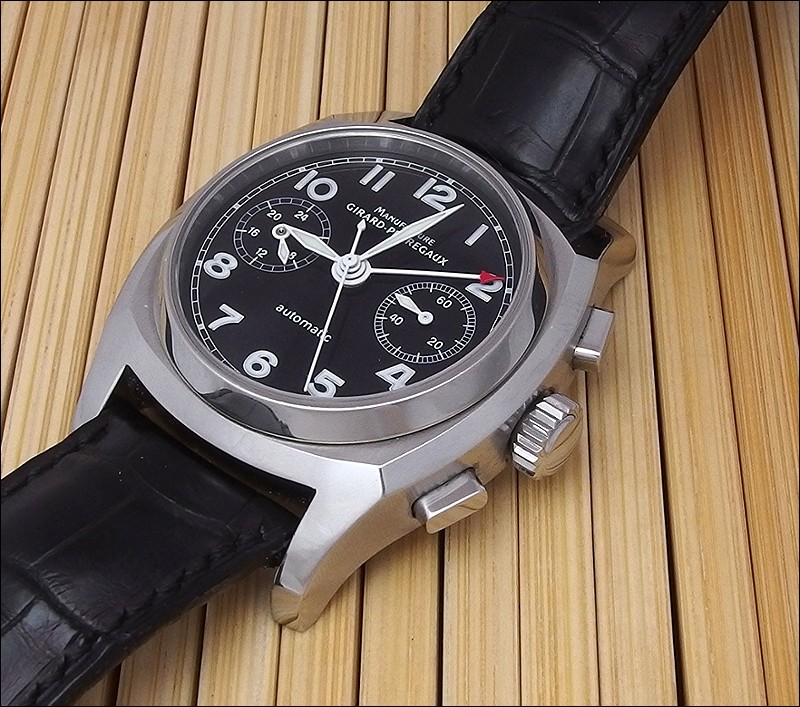 By: heartbreaker : November 19th, 2015-06:21
Girard-Perregaux actually WAS the first.
And I have to say that the Vintage 1970 chronograph you've posted looks gorgeous.
Thank you CC.
Elio
login to reply 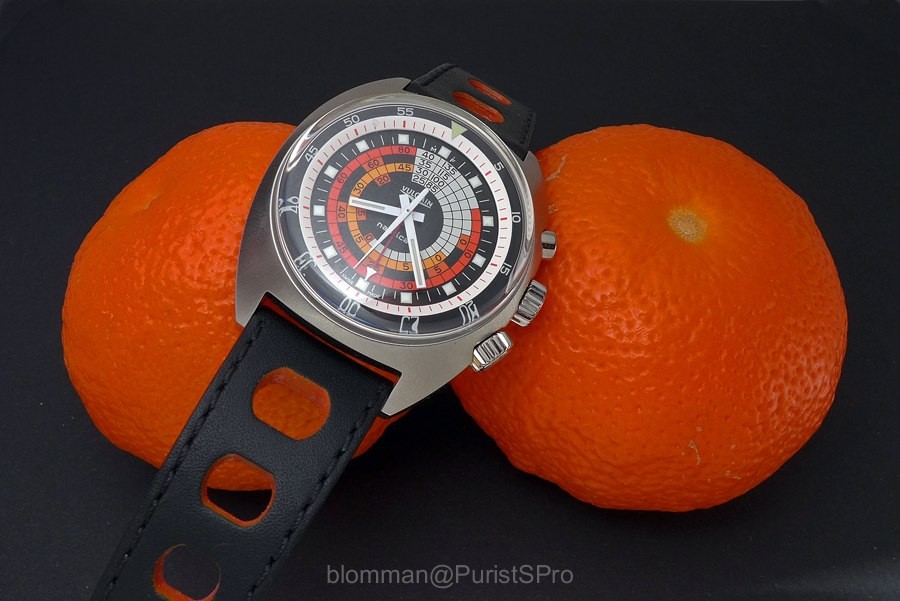 By: TheMadDruid : November 19th, 2015-11:17
I love looking at, and learning about, old chronographs. Excellent. Was the cushion shape new to 1976? And did they ever use it again (other than as a tribute)?
login to reply 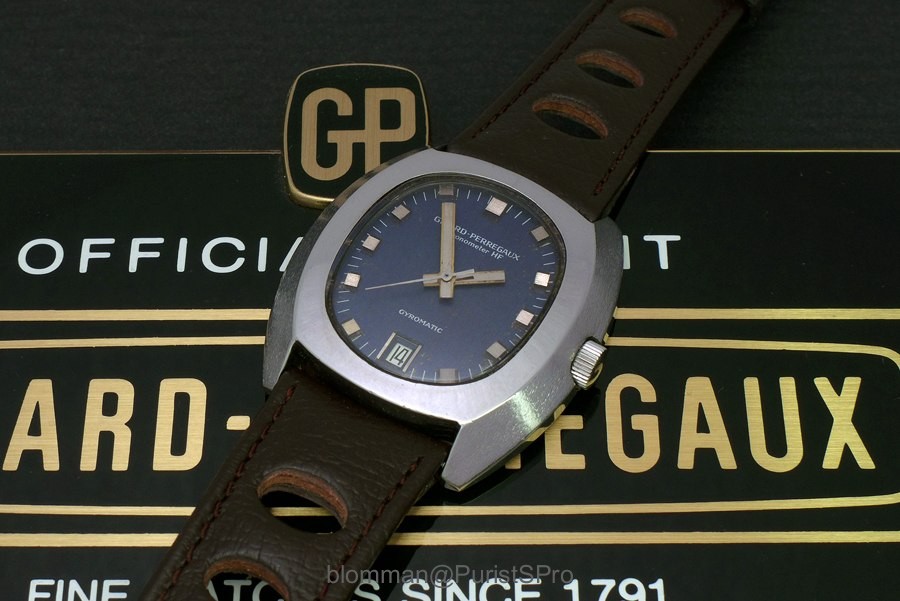 In the Olimpico line they had some even more crazy shapes! But I will come back to that.... Best Blomman
login to reply

Another one for you to have a closer look at next time we meet!
Best
Blomman
login to reply