It is my great pleasure to present to you the third part of this “Vintage GP journey, Summer Edition”.

For those of you who don’t know the reference GP 8846 N, the number refers to the first generation of Girard-Perregaux Olimpico chronograph. 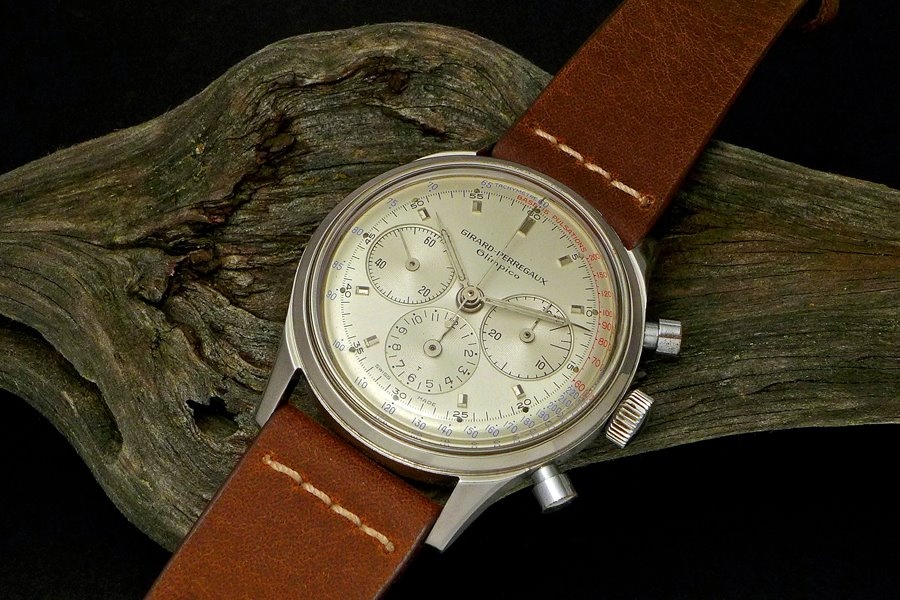 According to my contact at the Manufacture, the idea for the Olimpico chronograph came from one of the GP Agents in Mexico at that time, Guido de Angelis, who saw an opportunity to sell more watches during the 1968 Mexico Olympic Games. 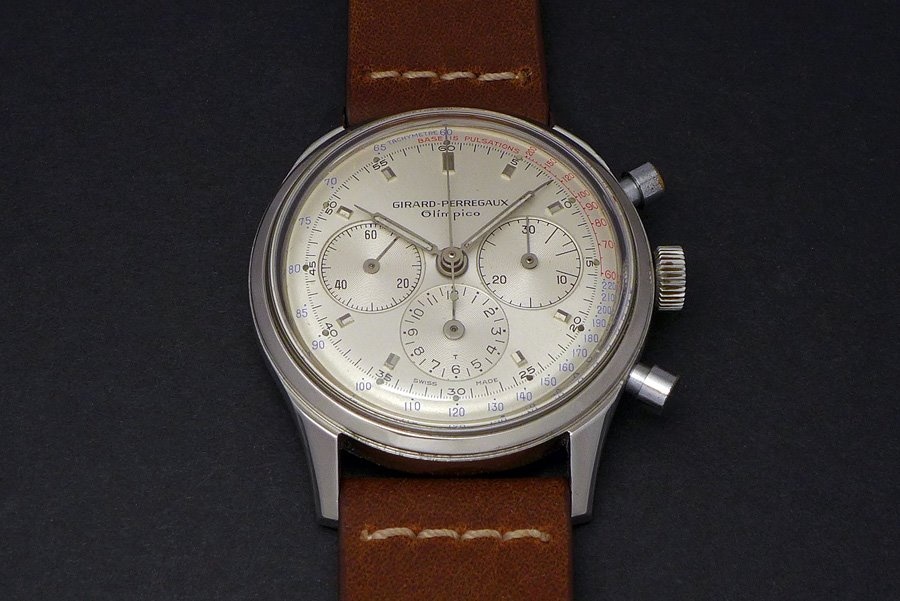 From a watch perspective the 1968 Olympic Games was a very interesting game. This was the first time in the Olympic Games history that an electronic timekeeping was officially used!

A lot of research and development in the timekeeping area was introduced during the Mexico Games. For the first time “touch pads” was used to time swimmers, the “Swim Eight-O-Matic” timer. 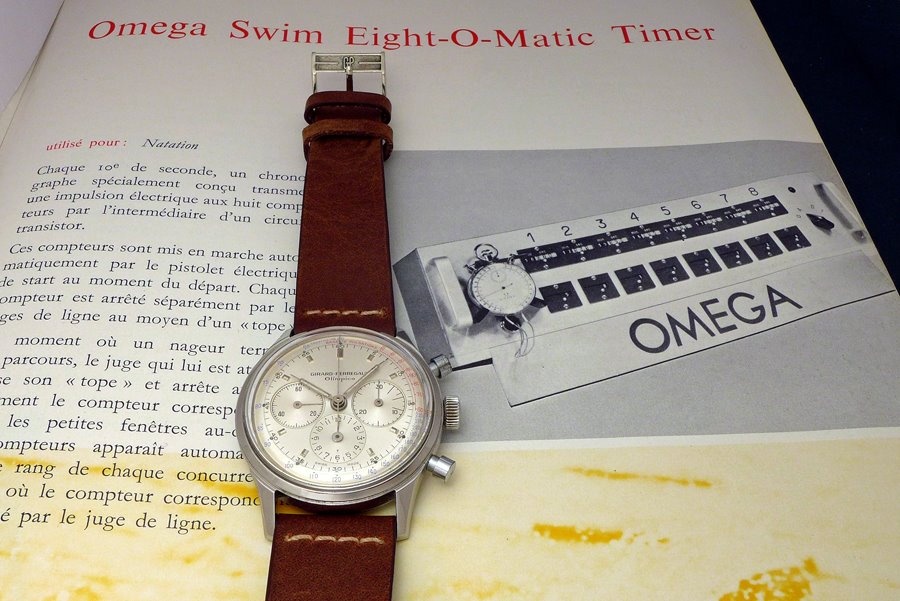 As mentioned the Girard-Perregaux Olimpico series started with the Mexico Olympic Game. After that several Olimpico references has been released. Some speculations on the internet claims that the Olimpico already was introduced in the 1950’s, but I have to decline these speculations based on the information received directly from the Manufacture.

I have no information on when GP stopped the Olimpico series for the first time but I do know there were no Olimpico watches released in 1980 and 1984.

Another missing information is exact which years GP released different Olimpico models. Some may have been release even in non-Olympic years… Will try to find out more.

That was the end of the Olimpico chronograph series and I don’t think we can expect a rebirth. 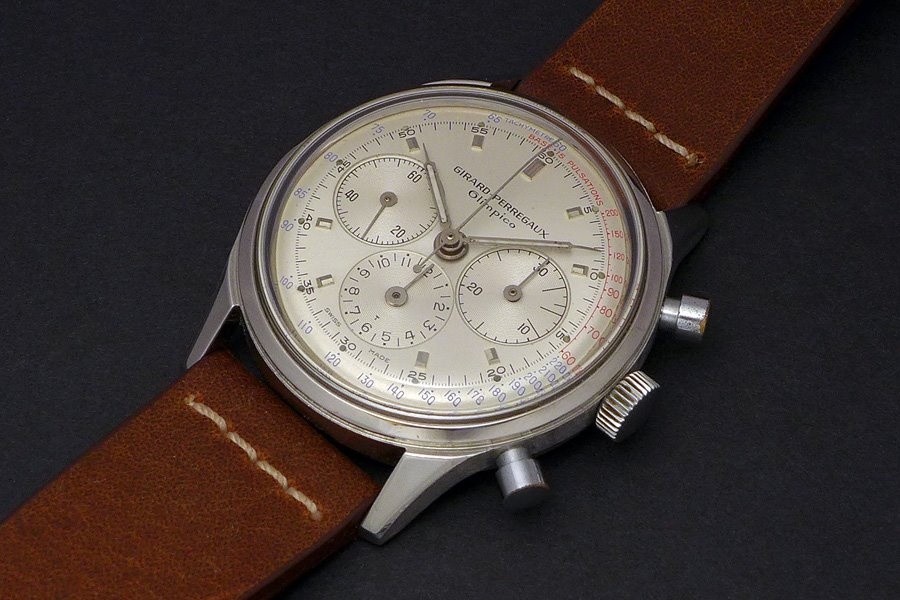 From what I understand there were two dial colors, one silver and one black. Sorry, I can’t show you any photo of the black version right now.

I find the silver version is just stunning! 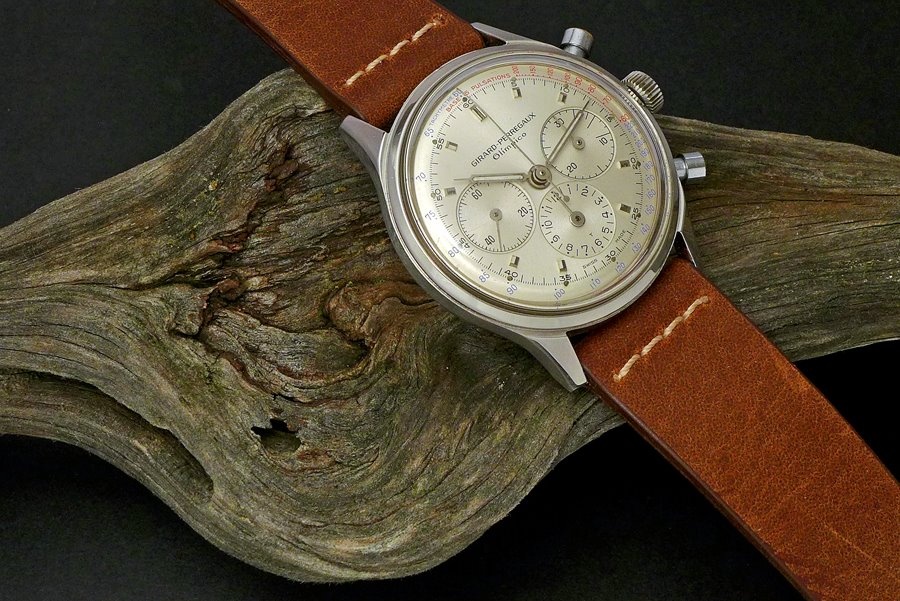 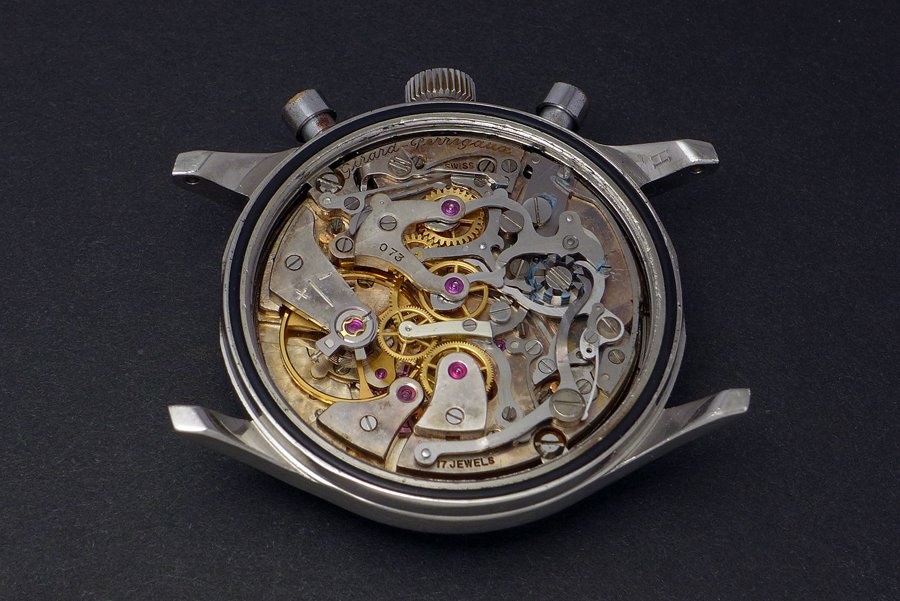 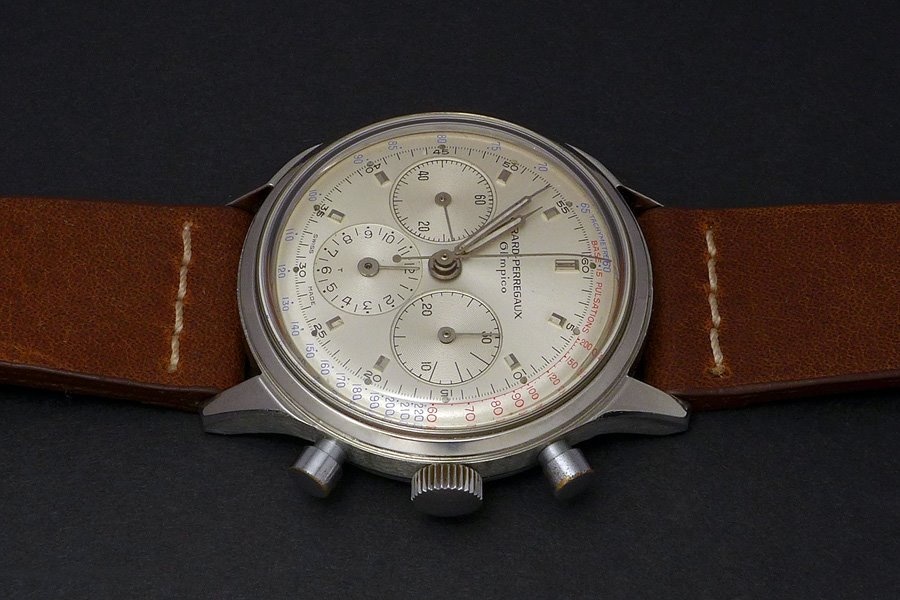 Screw down case back. 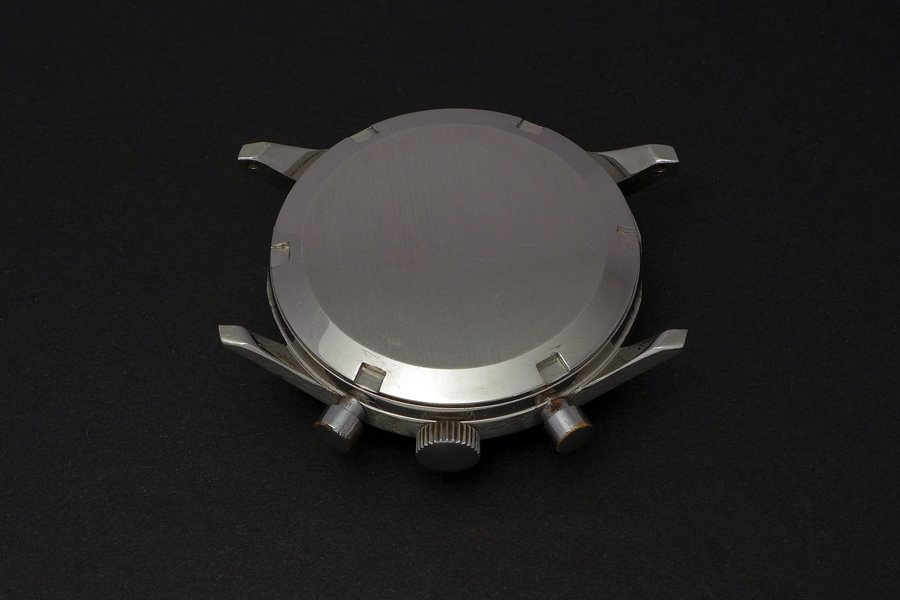 The first generation Olimpico came in at least two references, here the reference 8862. 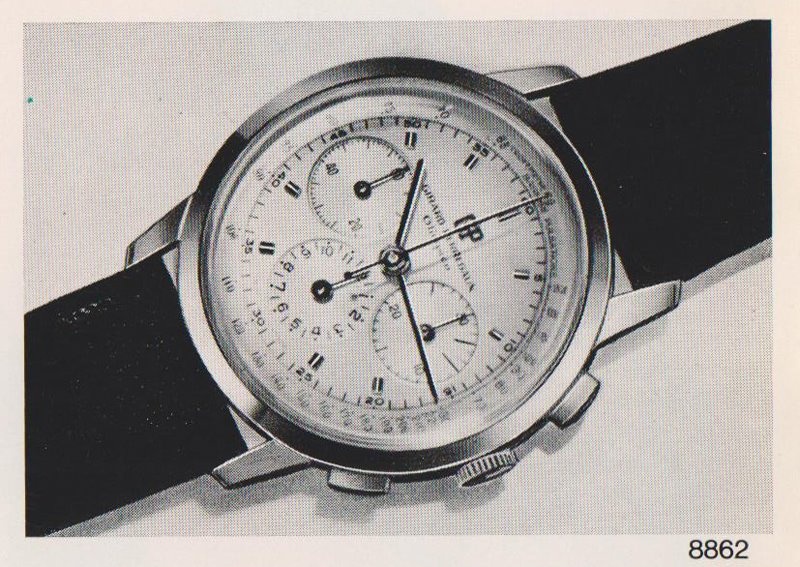 Notice the different pushers and the non-luminous hands and dial on the 8862. 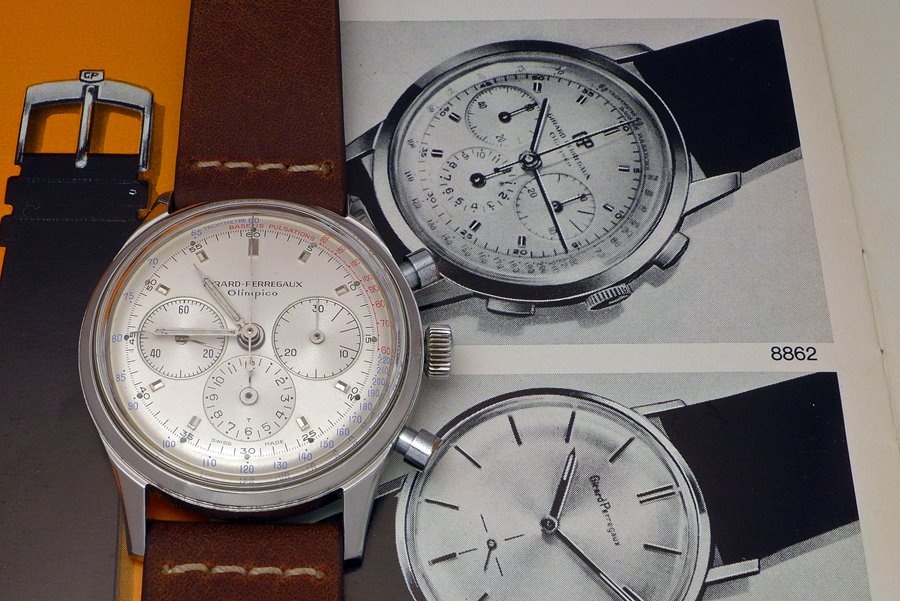 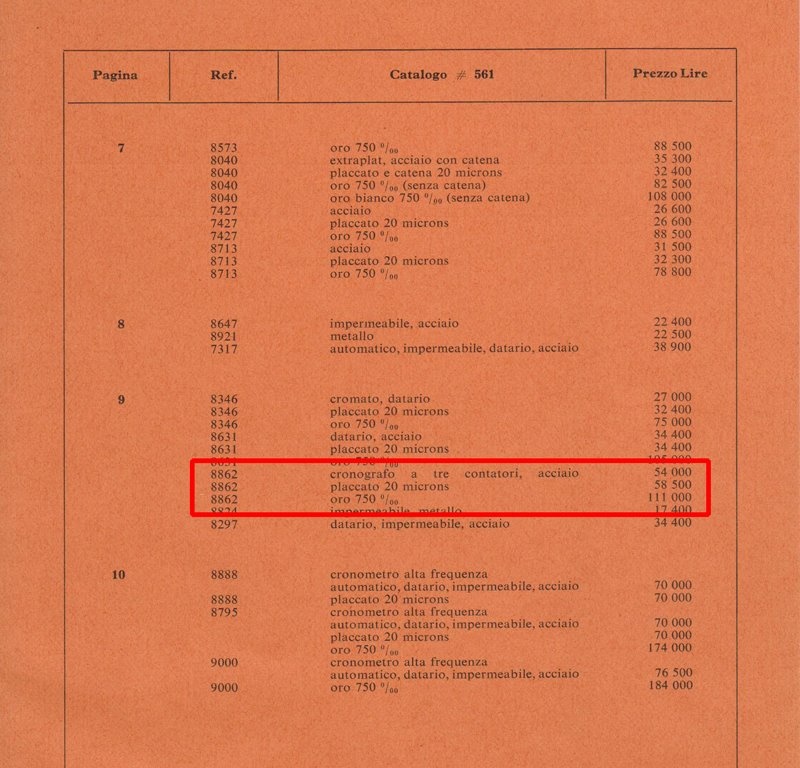 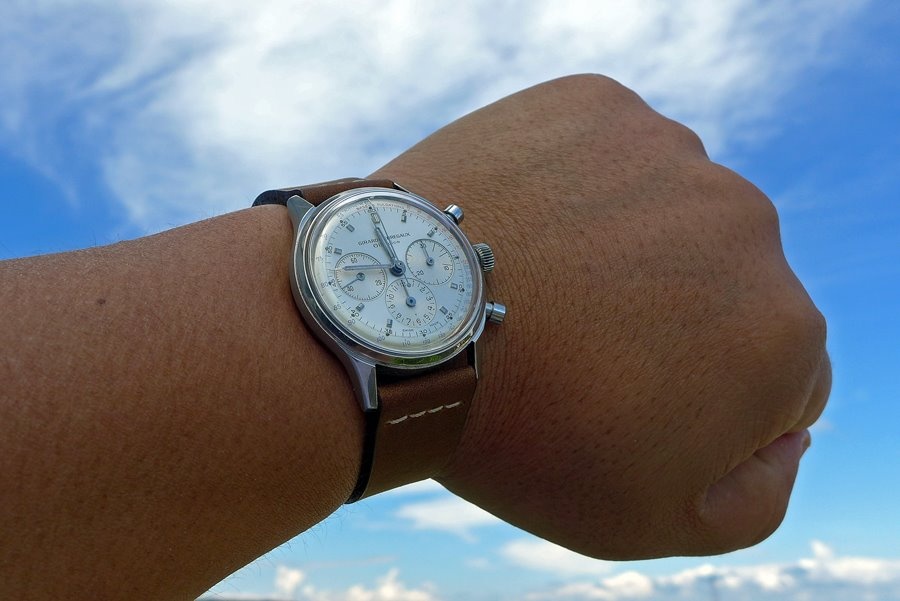 I have to confess that in the last few of month, this one has received a lot of wrist time. Who knew that a no-chrono guy like me could fall so completely in love with a chronograph…? 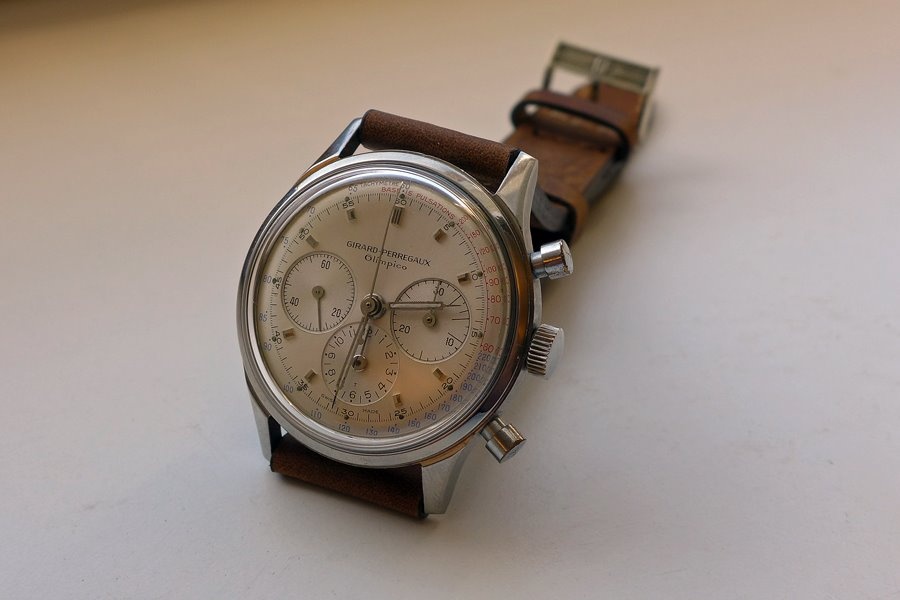 Friends, I hope you have enjoyed this part #1 of the GP Olimpico 8846!

This topic is so big and interesting that I will have to divide this post into a two parted series (minimum), hope you don’t mind. Even if I promised you a three parted summer menu, I guess no one will object that we prolong the summer and continue…? 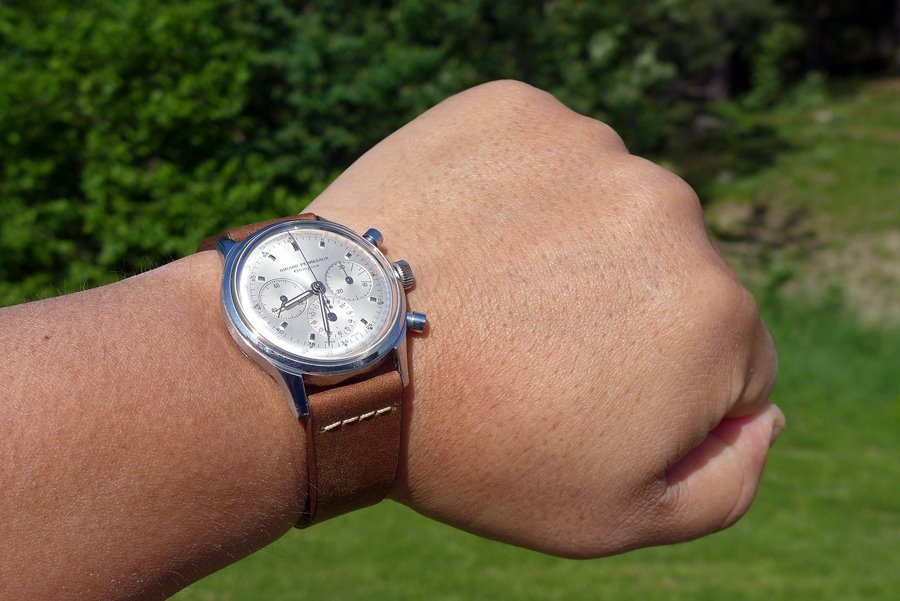 By: blomman Mr Blue : July 29th, 2014-00:19
Friends, It is my great pleasure to present to you the third part of this “Vintage GP journey, Summer Edition”. For those of you who don’t know the reference GP 8846 N, the number refers to the first generation of Girard-Perregaux Olimpico chronograph. Ac...
login to reply

By: Baron - Mr Red : July 29th, 2014-00:58
Firstly, congratulations on yet another GP into your collection. You move very very fast indeed. With this chronograph, you have not only a great piece of GP history but also a watch that is aesthetically beautiful and ....in stunning condition. I love th...
login to reply

By: blomman Mr Blue : July 29th, 2014-02:09
LOL! Yes, maybe this time... But no speed Gonzales! ;) This one I have hold back for several month now.... Yes, a piece of the GP history! Hopefully I will be able to uncover some more on this topic soon. Thank you, my friend Best Blomman
login to reply

By: crown comfort : July 29th, 2014-01:24
another stunning GP from the late 60ties/early 70ties. Especially love the beautiful condition of the watch. You almost got me there, I'm already looking at some GPs from the era...ah nooooo, I have been blommanised. CC
login to reply

Yes, CC! You have been Blommonized! ;)

By: blomman Mr Blue : July 29th, 2014-02:17
This is music to my ears! :) Looking forward to see you entering the vintage stage, CC! So many marvels to discover! Thank you for this compliment! :) Best Blomman
login to reply

Doing it again, my friend !.. What a Chrono-marvel !.. Your start into the Chrono-world

By: hs111 : July 29th, 2014-05:29
..has been no surprise to me, any more ( what about the DSA-Chrono , hmm?); Such nice balance of a classical, Vintage appearance ! Slowly but steadily, your "reservation" vs Chronos, becomes a piece of history, meanwhile and days to come, I trustfully ass...
login to reply

By: blomman Mr Blue : July 29th, 2014-10:30
Honestly, I have a couple of more chronos hidden right now (yes, I will post soon)... Guess that my no chrono days are over for good! ;) Thank you, my friend! Of course I will bring this one next time we meet! :) Best Blomman
login to reply

By: fernando : July 29th, 2014-05:30
You are unstoppable now with the GP craze and we are the better for it. Your background history of each specimen is delightful to read and so very informative! Thanks for sharing and looking forward to the next episode. :) cheers fernando
login to reply

By: blomman Mr Blue : July 29th, 2014-10:44
Throw me a bone and I will chase it to the end of the World! ;) Na, more serious, who can resist a great looking watch like this?! Especially when it comes with a story to tell! :) Thank you for your kind words, my friend. For me, to find the watch is onl...
login to reply

I knew it! The Olimpico is a great Chronograph.

By: amanico : July 29th, 2014-05:57
Top Class and housing a very nice movement. And tis one seems to be in super condition, too. Bravo, my friend, and thanks for this very interesting post. Nicolas
login to reply

Not a surprise, but a marvellous catch. ;) [nt]

By: Albi : July 31st, 2014-11:19
Of course I like also most of their current offerings, but when you look at vintage pieces, then you realize that there are so many amazing gems in GP's history! Makes me wish I could chase them all!! :) Best, Alberto
login to reply

All?! Watch out that you don't become...

The truthful answer would be: both! :)

By: Ares501 - Mr Green : July 30th, 2014-00:33
I was into GP long ago you become mod but now I'm obsessed :) Thank you for all the great work you are doing for us GP freaks You are moving speed of light my friend I'm just a snail Damjan P.S. Yes I expect nothing less that grappa ;)
login to reply

By: blomman Mr Blue : July 30th, 2014-07:03
I will try to keep up the pace so that this place will become a lively and vibrent mecca for all GP freaks! ;) Best Blomman
login to reply

By: Goldenlutin : July 30th, 2014-15:32
The Olympic "story" began for GP in 1936 with the "Mimolympic" watch which was sold both under the GP brand and Mimo (). This is the only (and last) time GP used something you could call an in-house movement in the Olympic chronographs. To be exact, the M...
login to reply

Very interesting informations, Goldenlutin. I didn't know that about this chrono.

By: Goldenlutin : July 30th, 2014-23:54
There is an EP 40 (with hour counter) movement in it. Definitively a watch to own. Sorry, I have no access to my pictures at the moment. Regarding old/vintage GP chronographs, before GP released the Excelsior Park re-branded chronographs it was selling re...
login to reply

Thanks, GL, I am in the hunt for such Chronographs, from GP.

All iteresting point, but I do not fully agree...

It was not meant negatively...

By: Goldenlutin : July 31st, 2014-05:30
I do own these watches myself. It is just a fact that these chronographs were bought and not produced by GP. It is only in a modern view of things and due to the modern hype for manufactures that it might sound negative. I could make you a long list of ot...
login to reply

You have the Olimpico chronos?!

By: Goldenlutin : August 2nd, 2014-00:31
but I have no access to my pictures right know. As I said, my favorite on it the latter execution with turning bezel. I do own a NOS one. Best, Goldenlutin
login to reply

Thank you dear Blomman for a most interesting and informative post about...

By: Subexplorer : July 31st, 2014-18:04
... a watch I love so much. Your timepice is in a superb condition which makes so enjoyable to wear on the wrist. You throw a lot of light about a model I also own and knew so little about. Regrettably, the inner of the back case of mine doesn´t mention t...
login to reply

Na, we only tease your teast buds....

Dear Abel, I am certain that your watch...

Thank you so much for your information dear Blomman!...

By: Subexplorer : August 1st, 2014-12:11
... I will check tonight to see if I can find the reference number between the lugs. Definitively it has no numbers on the case back, which is the same shape of yours. But as you well say they seem to be the same reference. I am more than happy to share i...
login to reply

Dear Blomman: I confirm that my watch also have the 8846N reference...

By: Daniel Olson : October 27th, 2017-10:51
Welcome here, Daniel! Please use our collectors market for any listings of watches. Best Blomman ...
login to reply

Here is mine, second generation

What I thought.... A Beauty! What movement is inside? [nt]

So, like the former one? Cool, I love this movement.

Thanks. I already noticed that one, but no successful hunt, for the moment. :( [nt]

I'm happy this one was bumped back up, so that I could enjoy it. What a fantastic post (and watch, of course). [nt]

Happy to see some one still enjoys these old posts! :)

What a treasure trove of information and photos! Thank you for the links. :-) [nt]

By: blomman Mr Blue : October 30th, 2017-11:52
When ever you have the time, you should brows our archive here - a lot of fun and interesting read! Best Blomman
login to reply

Just catching up on some threads & this 1 jumped off the screen!

By: nomadgiles : November 1st, 2017-11:00
Lovely chrono there, Blomman - & thanks for sharing its pictures, history & details. Such a well balanced & classy dial! All the best, Giles
login to reply