The Palme d’Or is crafted by Chopard and celebrated its 60th Anniversary in 2015.

Enduring symbol of the Cannes Film Festival, veritable grail for every film producer on the planet, the Palme d’Or award for the best film in the official competition is celebrating its 60th Anniversary this year. But the Palme d’Or has not always been in the guise in which we know it today. This supreme award has experienced several transformations since the creation of the Festival, prior to attaining its most noble and successful form in the Chopard workshops. 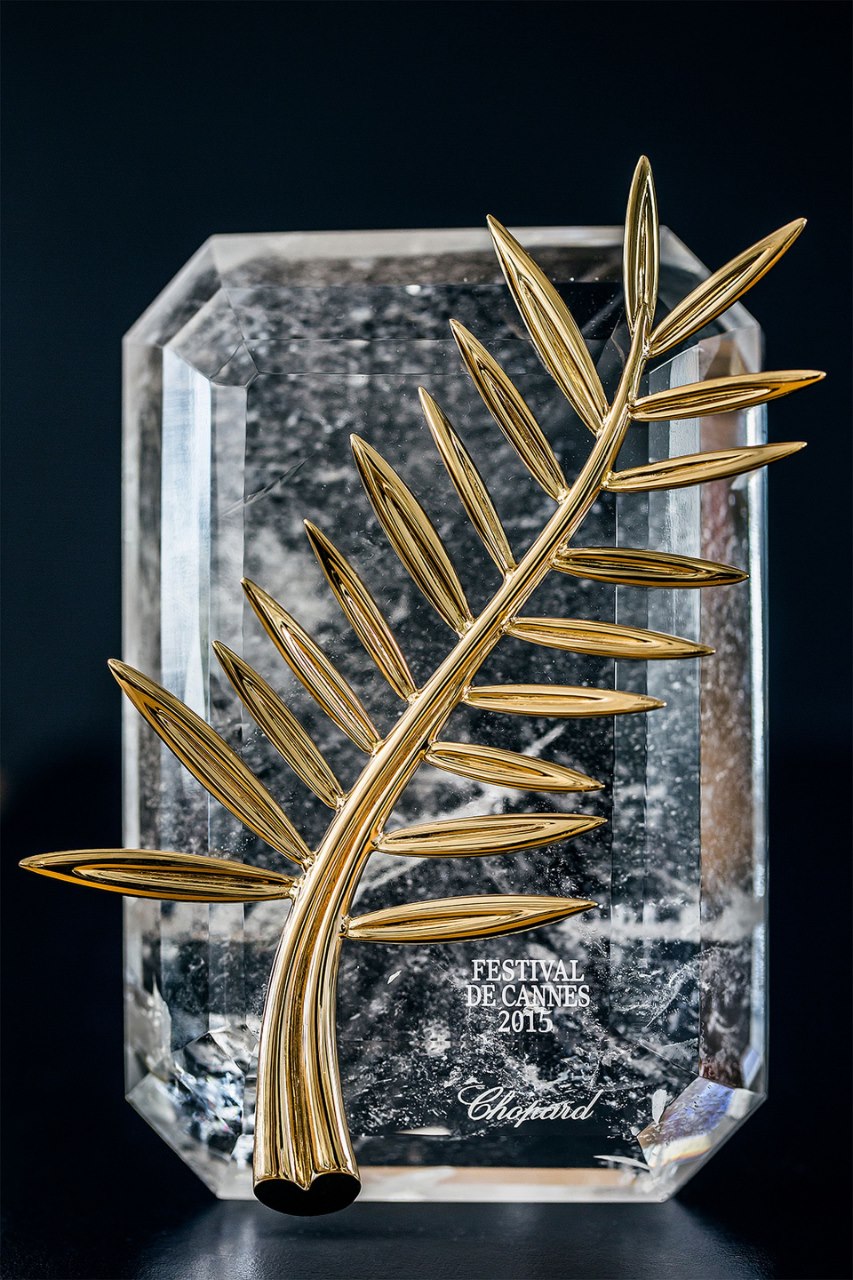 Until 1954, the Jury of the Festival awarded a “Grand Prix du Festival International du Film” (International Film Festival Grand Prix) to the best director. The laureates were presented with a work by a fashionable contemporary artist, such as figurative paintings or Sèvres vases. In 1954, selected jewellers presented designs of trophies inspired by the palm motif, in reference to the palm trees on La Croisette as well as the city’s coat-of-arms. Over the next 4 decades, various trophy shapes and even lonely certificates served as the Prize.

In 1997, on the occasion of the 50th anniversary of the Festival, a Palme des Palmes (Palm of Palms) was awarded to Ingmar Bergman for his work overall, attended by 28 other holders of the trophy. That same year, the Maison Chopard was preparing to open a boutique on La Croisette. Chopard Co-President and Artistic Director, Caroline Scheufele, came up with the idea of inaugurating it during the Festival and the association between the two organisations has continued.

A re-make of the Palme d'Or was called for in 1998: Chopard’s Palme d’Or is a precious jewel for the most prestigious of awards. 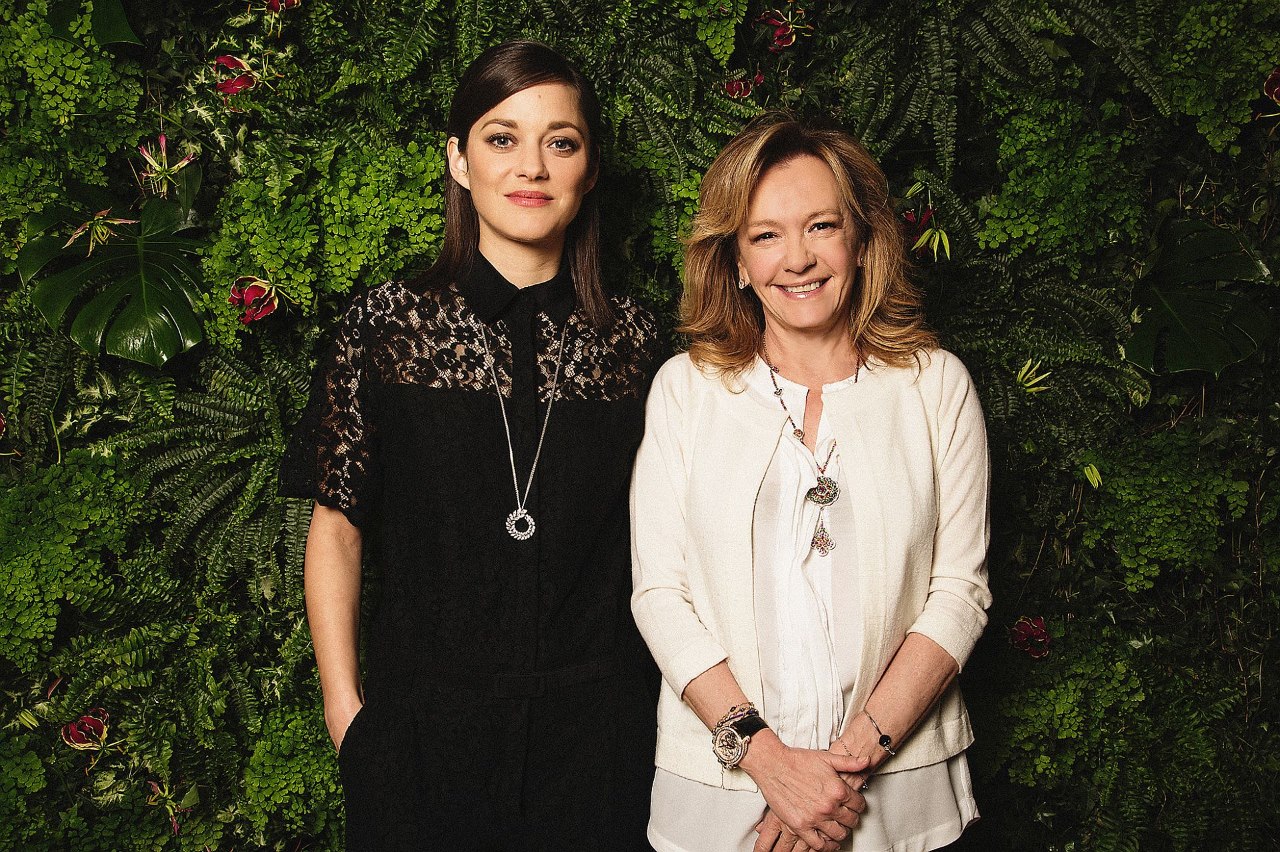 Caroline Scheufele decided to make the Palme d’Or lighter but to give it greater volume and depth, while emphasising the veins in the stalk and the regulation 19 leaves. She also designed the stalk so that it ended in the shape of a heart, one of Chopard’s jewellery emblems.

While the 1998 and 1999 Palme trophies were made of vermeil, a silver substrate gilded with 30 microns of fine gold, since 2000, the Palme was truly precious with 125 grams of 18-carat gold. Caroline Scheufele added another precious detail to it with a rock crystal pedestal carved like an emerald-cut diamond. The Palme d’Or was then presented in a royal blue Moroccan leather box. In 2001, after Lars Von Trier, wild with joy, brandished his Palme for 'Dancer in the Dark' as high as he could and the trophy fell on the floor, a safety catch was added to the box.

To obtain a crystal of the quality and size as that used for the trophy, Marc Couttet (Chopard Director of Haute Joaillerie) and his team start with a raw chunk weighing at least three kilos that has to be sawn, cut, shaped and polished during several operations. This is a costly preferential treatment that calls for highly qualified know-how ensuring a jewellery finish that the previous Palmes did not have. Its creation requires a total of seven craftsmen and around 40 hours of work, between making a wax model, hand-casting the plaster in a furnace at 760°C, injecting the gold into the mould, polishing, and finally securing it to the rock crystal pedestal. 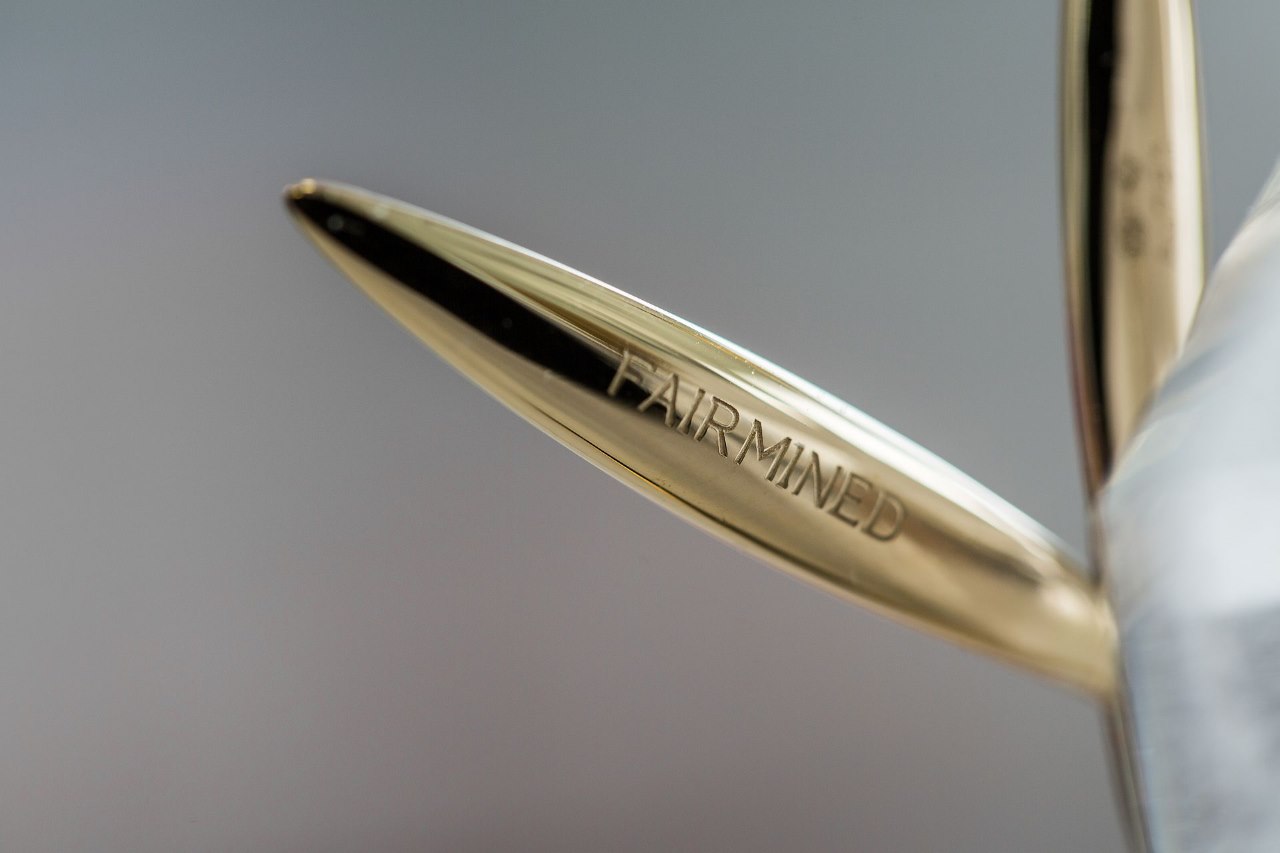 In 2014, Chopard extended its commitment to the development of sustainable luxury which started with 'The Journey to Sustainable Luxury' created with Livia Firth, founder of Eco-Age, and launched in May 2013 at the 66th Cannes Film Festival.
At this point, the watchmaker-jeweller decided to make the Palme d’Or out of ‘Fairmined’ gold, mined with respect for people and the environment.

“I am delighted and proud that the Palme d’Or that I redesigned 17 years ago, this very powerful symbol that is known and recognised all over the world, can today be made of traceable gold, mined with respect for people and the environment,” says Caroline Scheufele. 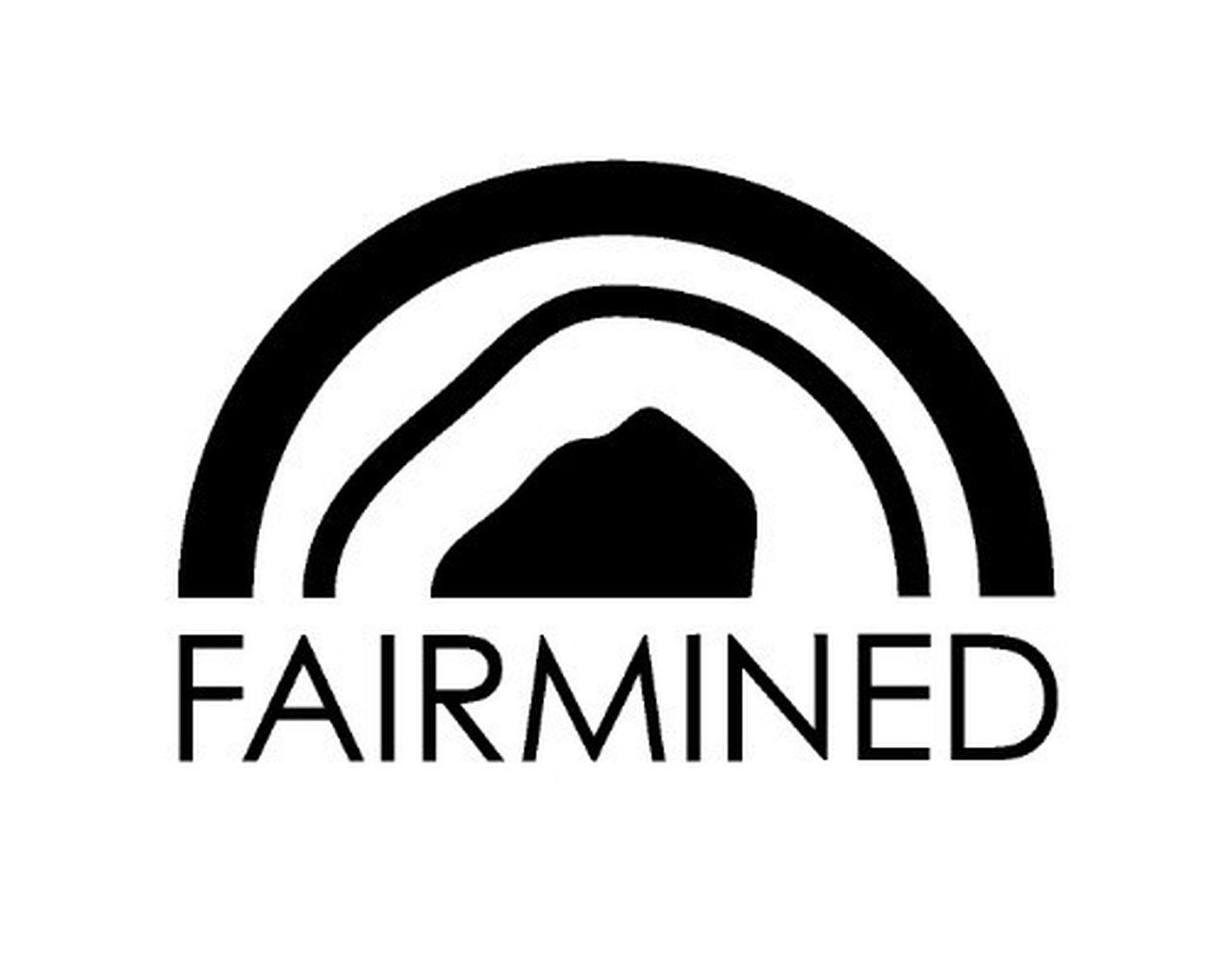 Designing and Making the Palme d'Or

1. Enlarging initial sketch on a scale of +6% to allow for two reductions during casting. Transfer to wax block.

3. Sculpting the stem with its veins and tendrils from the block.
Scalloping the lobes of leaflets.
Sketching in the position of the leaves on the stem.

4. Polishing shapes over a flame.

5. 1st casting (NO IMAGES) similar to the 2nd casting pictured below.

Investment: The ceramic mould, known as the investment, is produced either by multiple dipping - stuccoing - hardening or by placing the cluster upside-down in a flask and then liquid investment material (plaster) is poured into the flask. The flask is then vibrated to allow entrapped air to escape and help the investment material fill in all of the details. 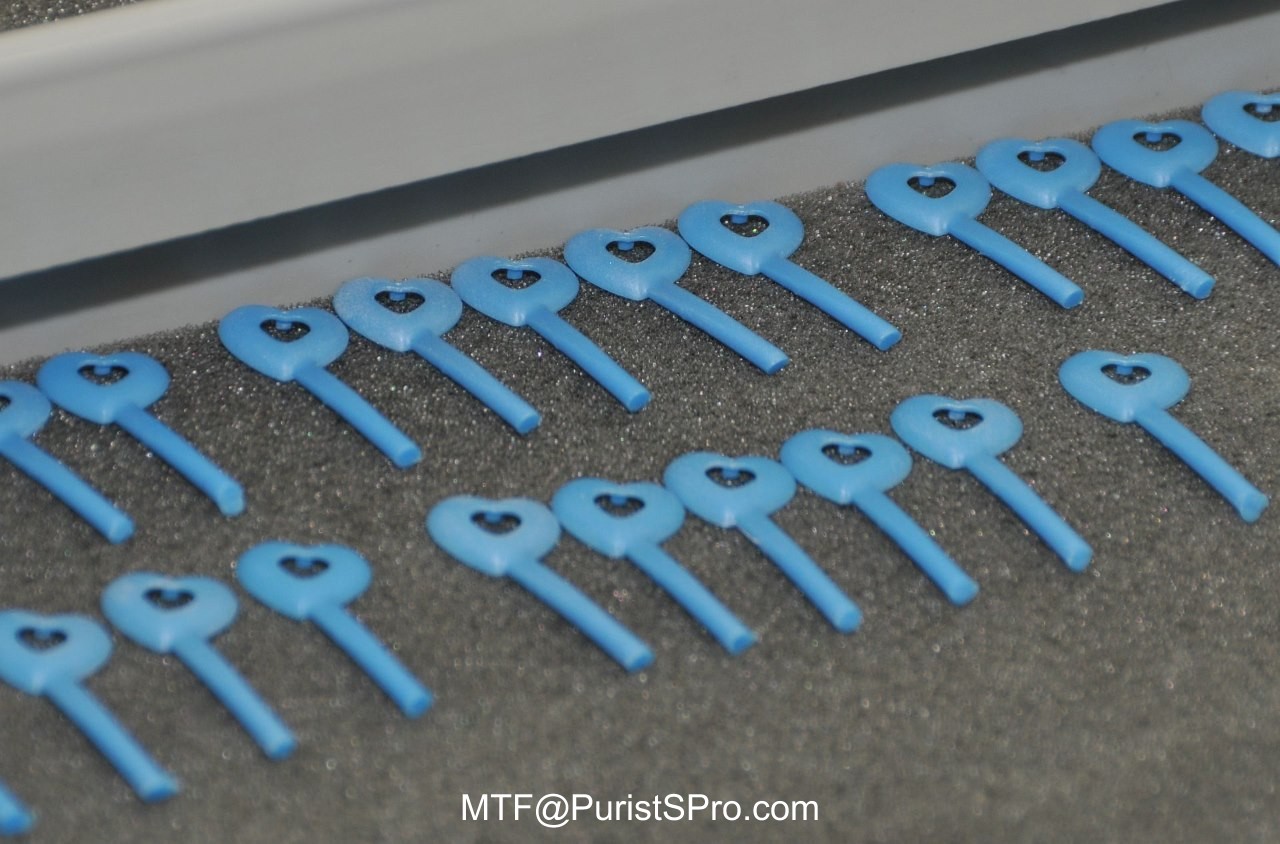 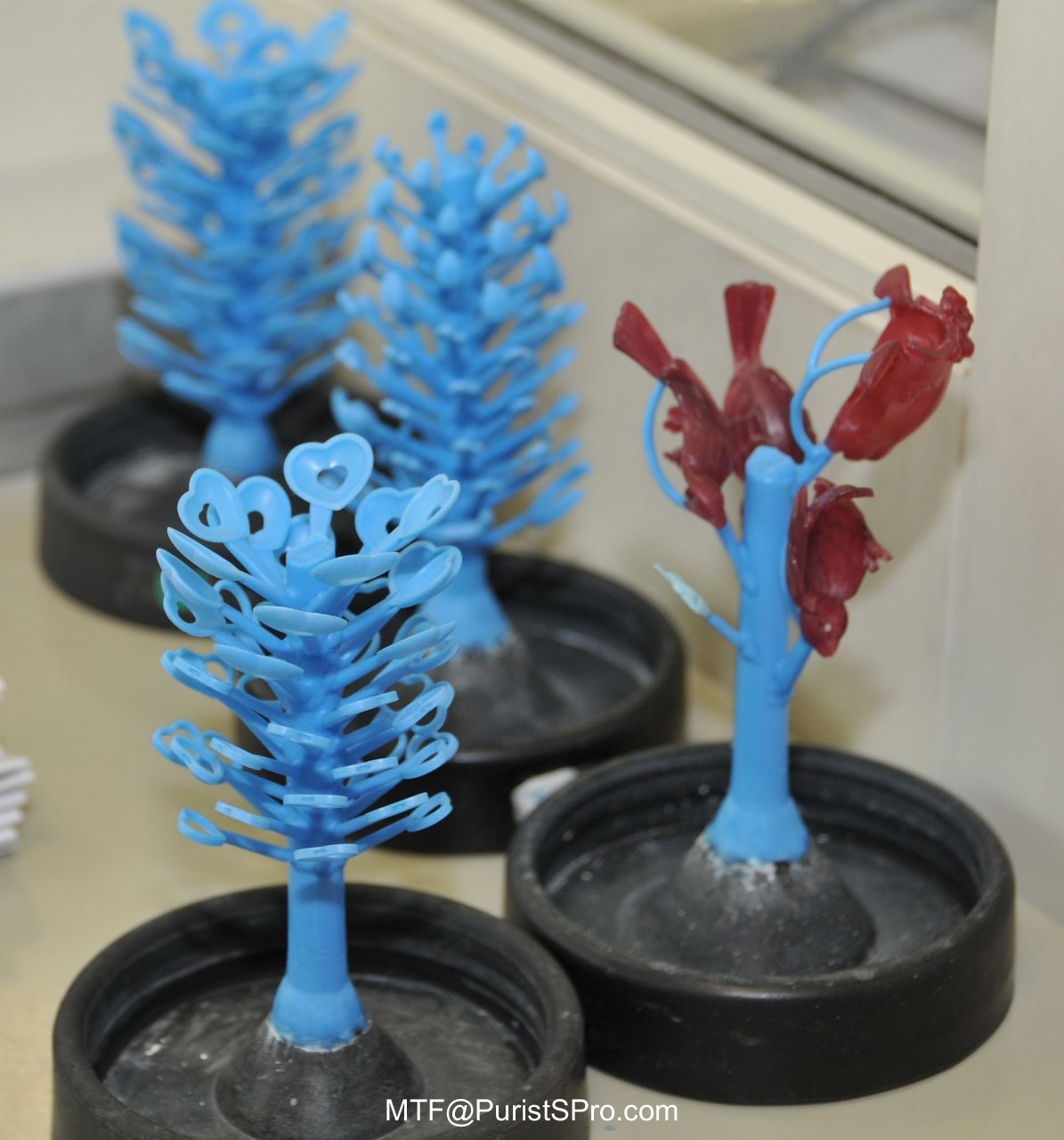 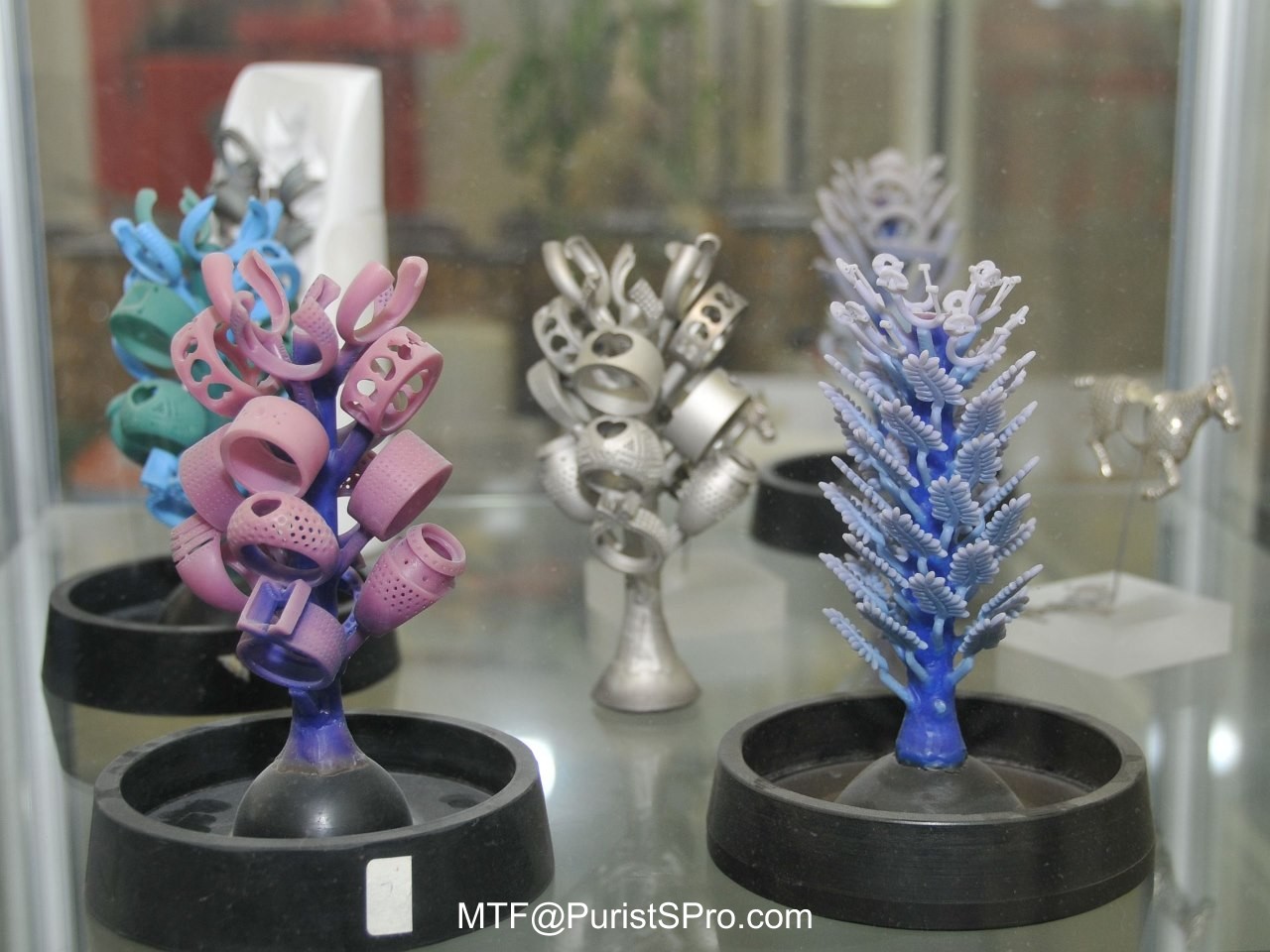 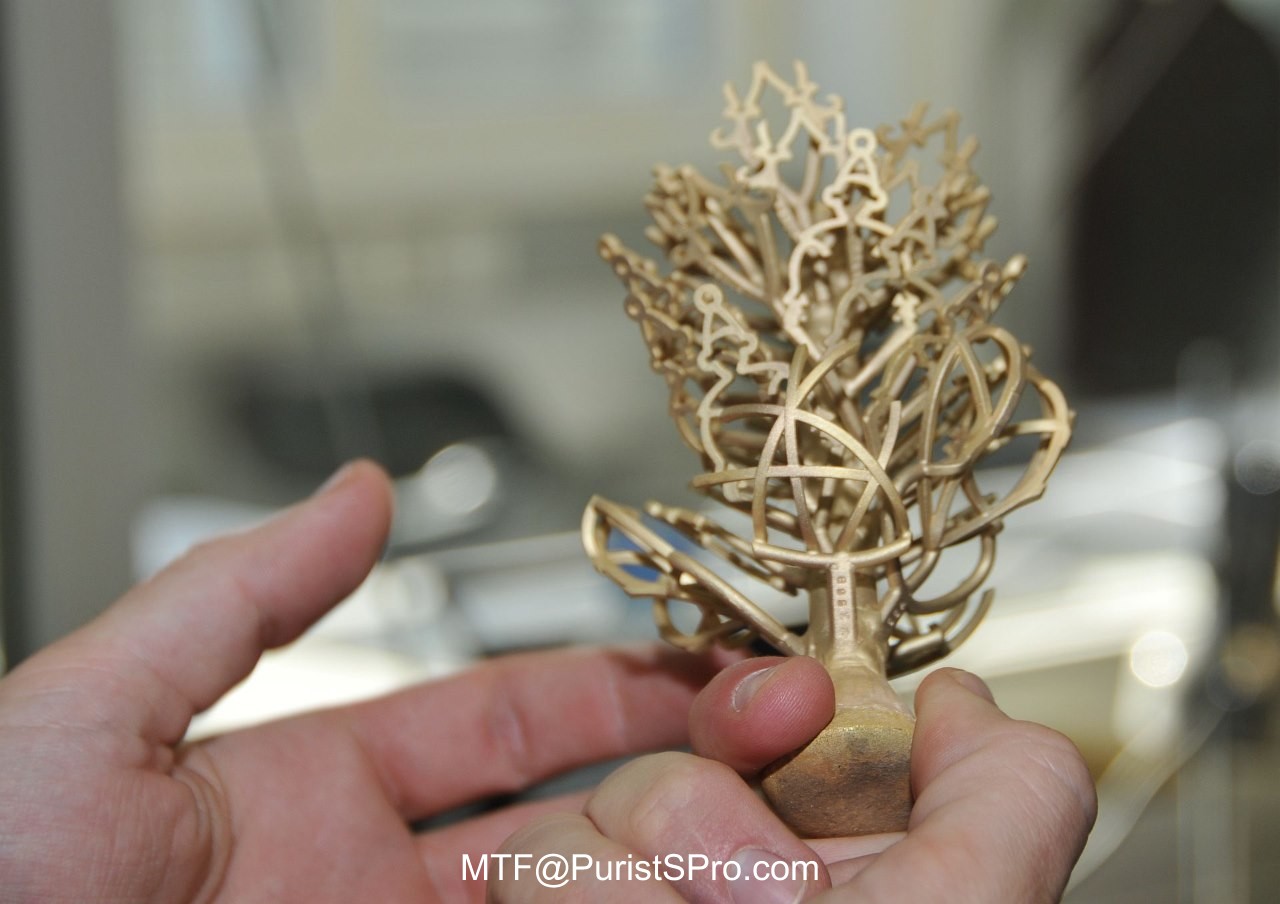 Individual components to be casted need wax patterns to be connected by channels (sprues) to form a network so that the gold can flow throughout the mould into every nook and cranny. 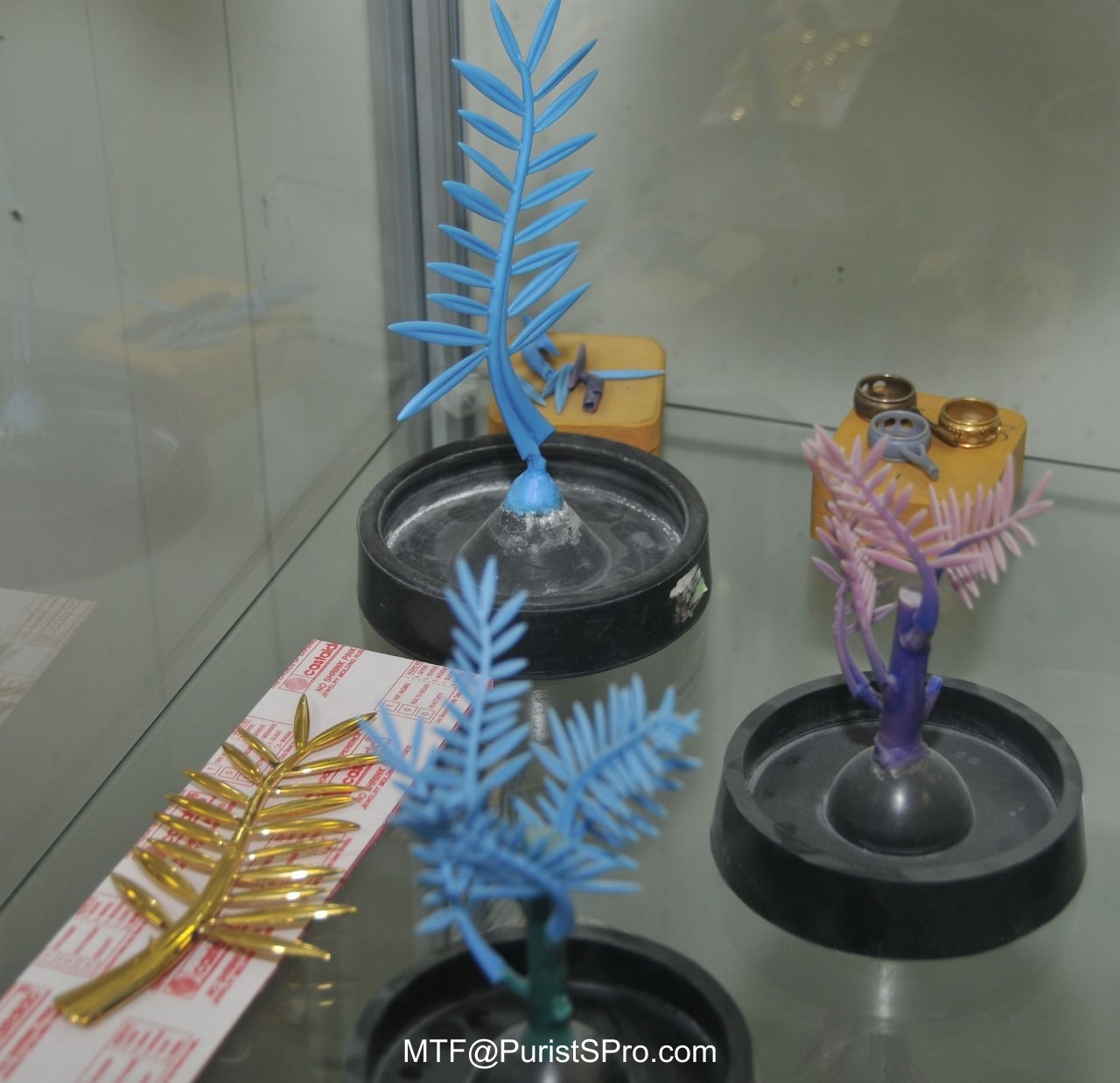 At Chopard, the Palme d'Or manufacture requires two castings. The first to make the 'Master' piece and then a rubber mould is made from the Master that is used to cast a second time to make the 'Product' piece. We will show the photos of the casting only once since it is a repeated process. 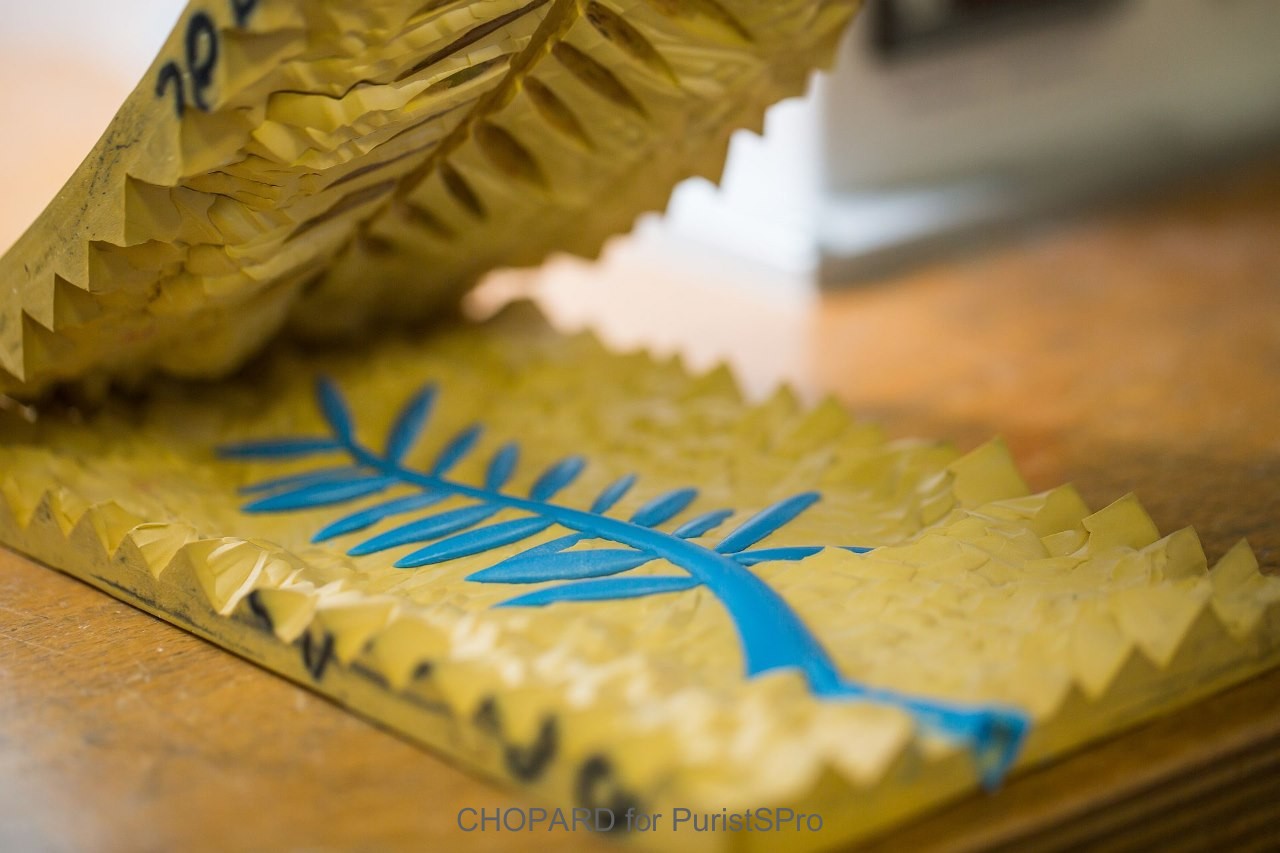 7. 3% “origin” 2nd casting
A rubber mould adopting the shape of the object under pressure is fashioned and then heated to 150°C; the rubber is then opened with a scalpel and the metal shape is released. Liquid wax can thus be injected in positive into the mould. 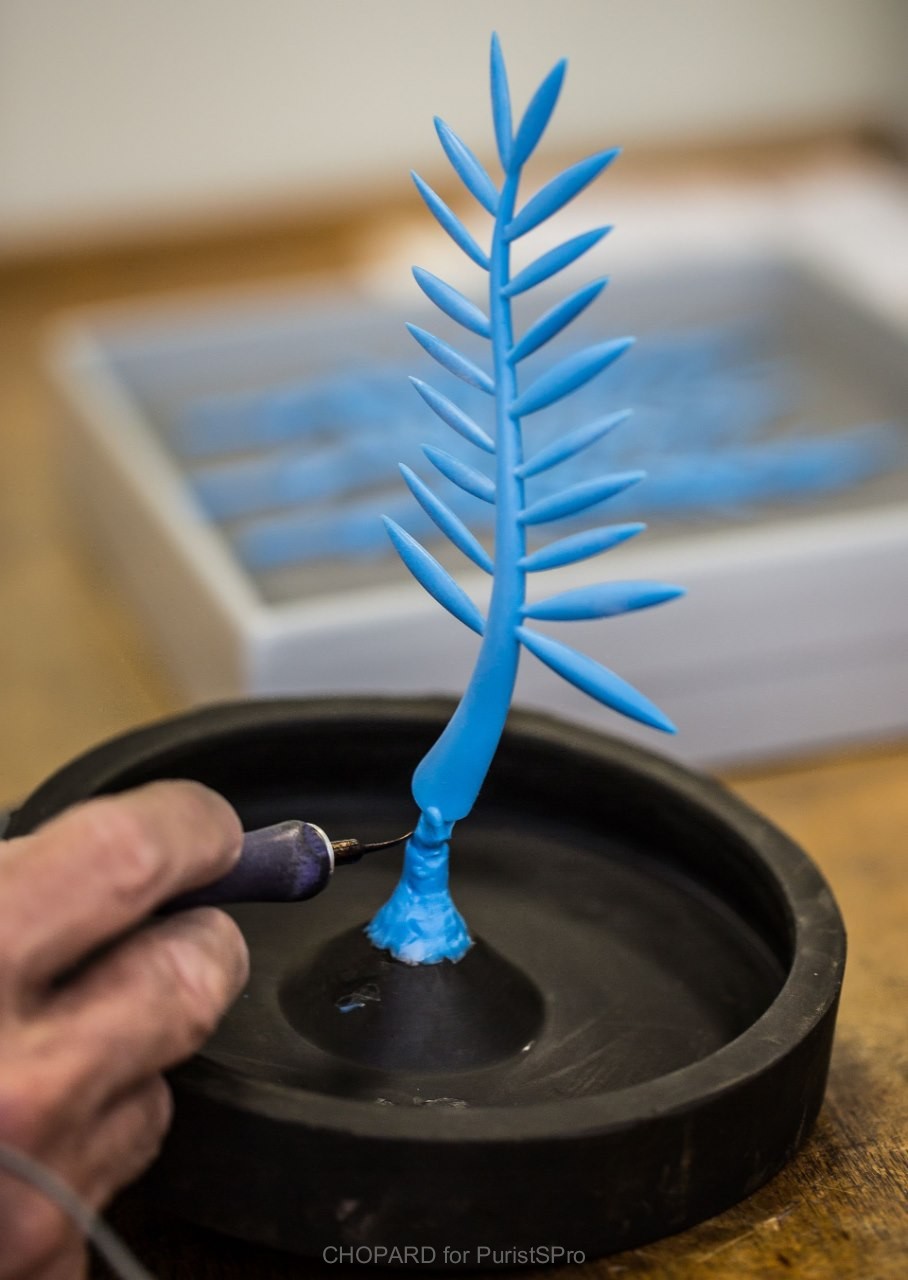 Arranging the stem and leaves on a pouring gate former (sprue base) around a central wax pillar or sprue. 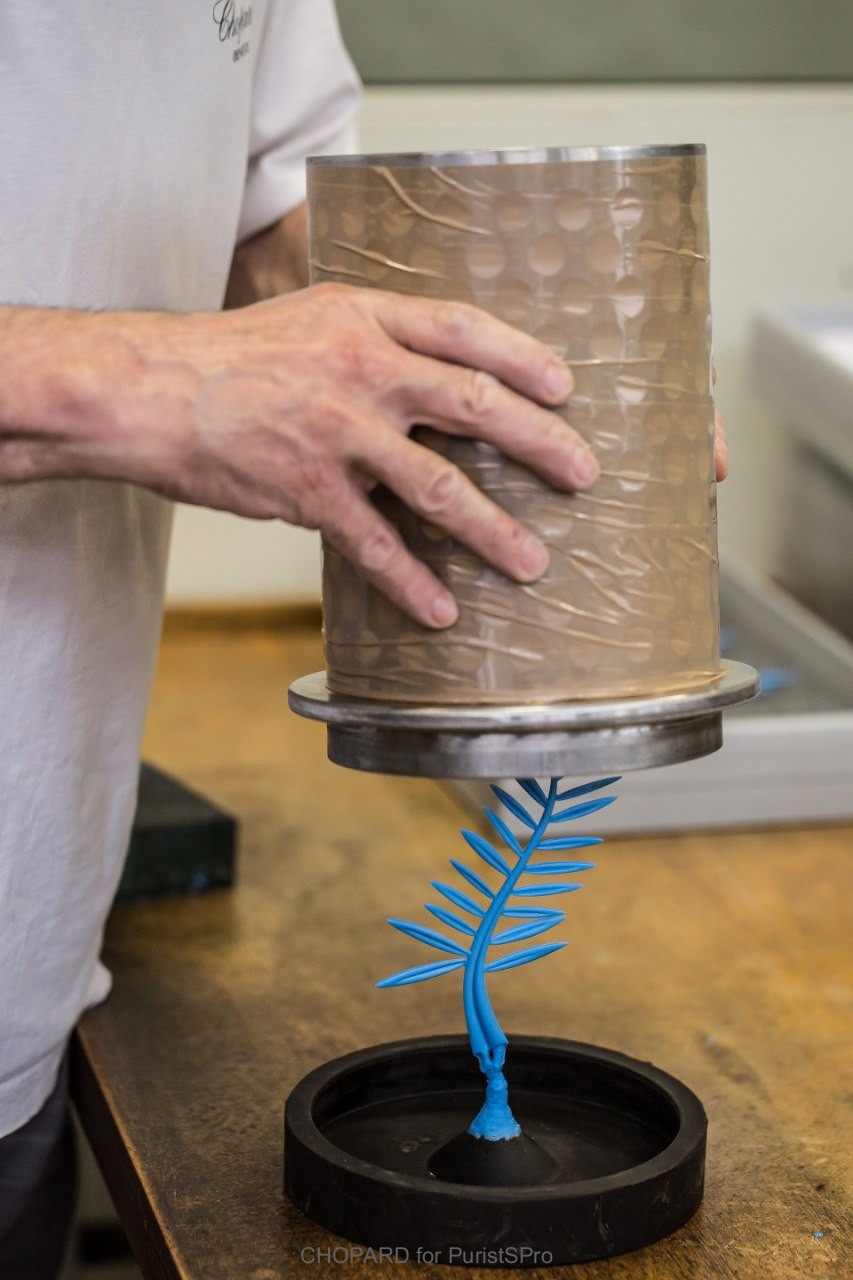 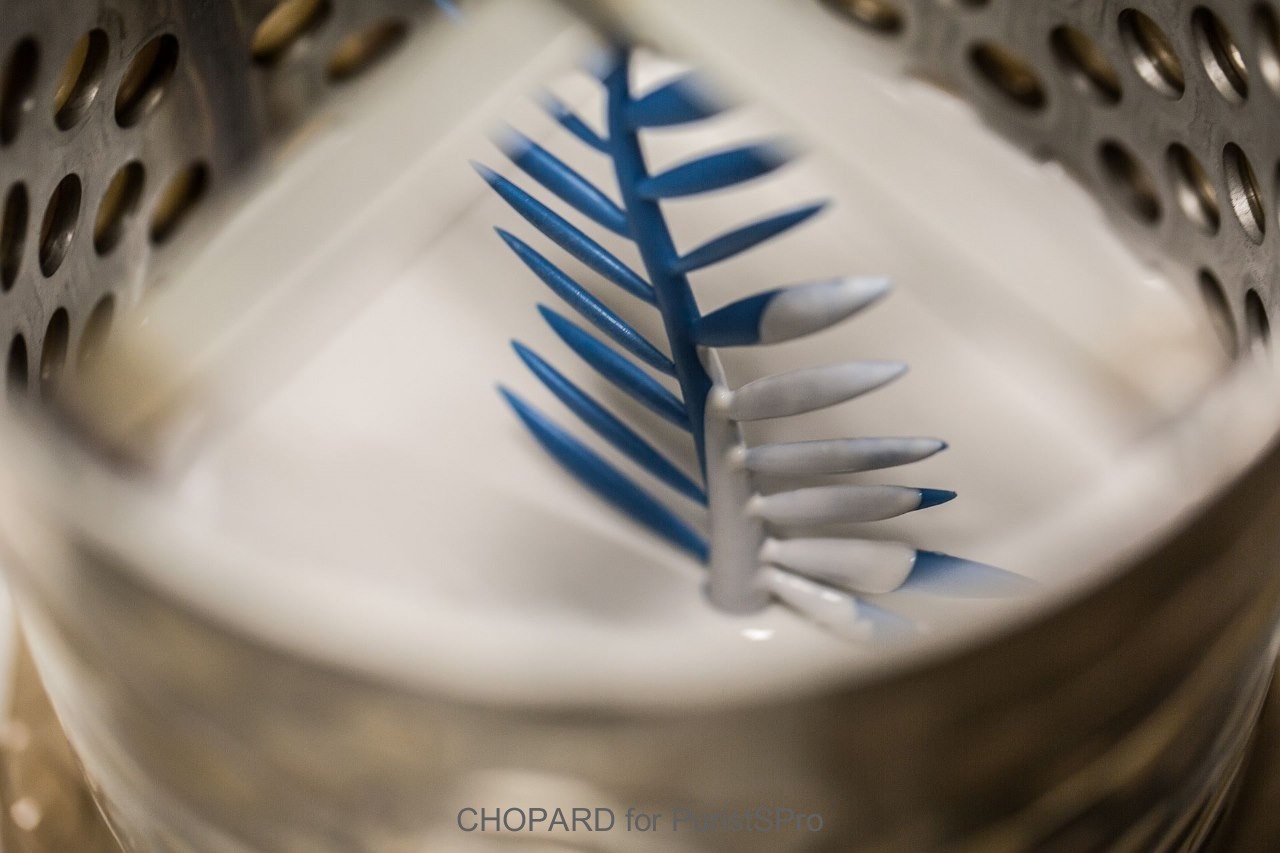 Sealing the pouring gate former by a flask to be filled with a liquid refractory plaster coating. 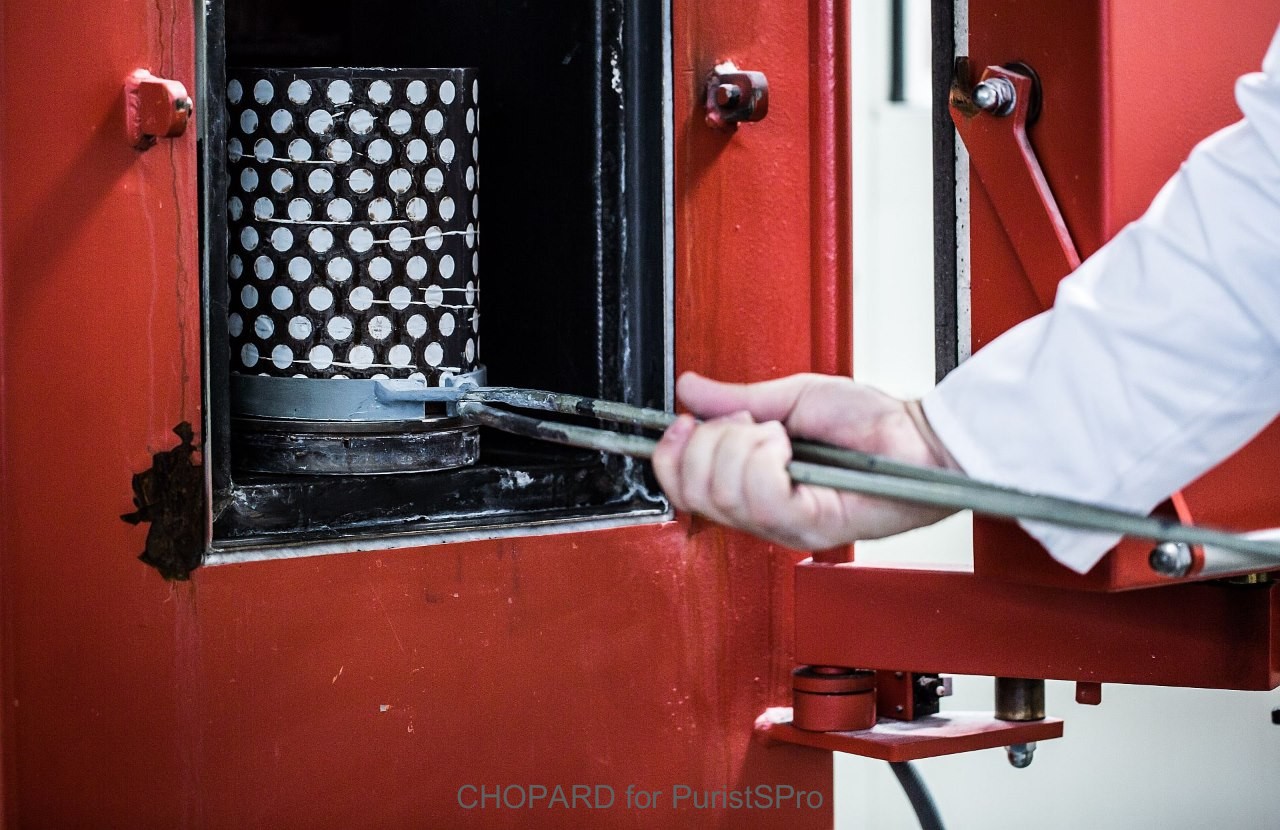 Hardening and then firing the refractory plaster in a furnace at 760°C during an entire night.

The 'ways' flows out through the central sprue to leave a negative imprint on the plaster. The wax is "lost". 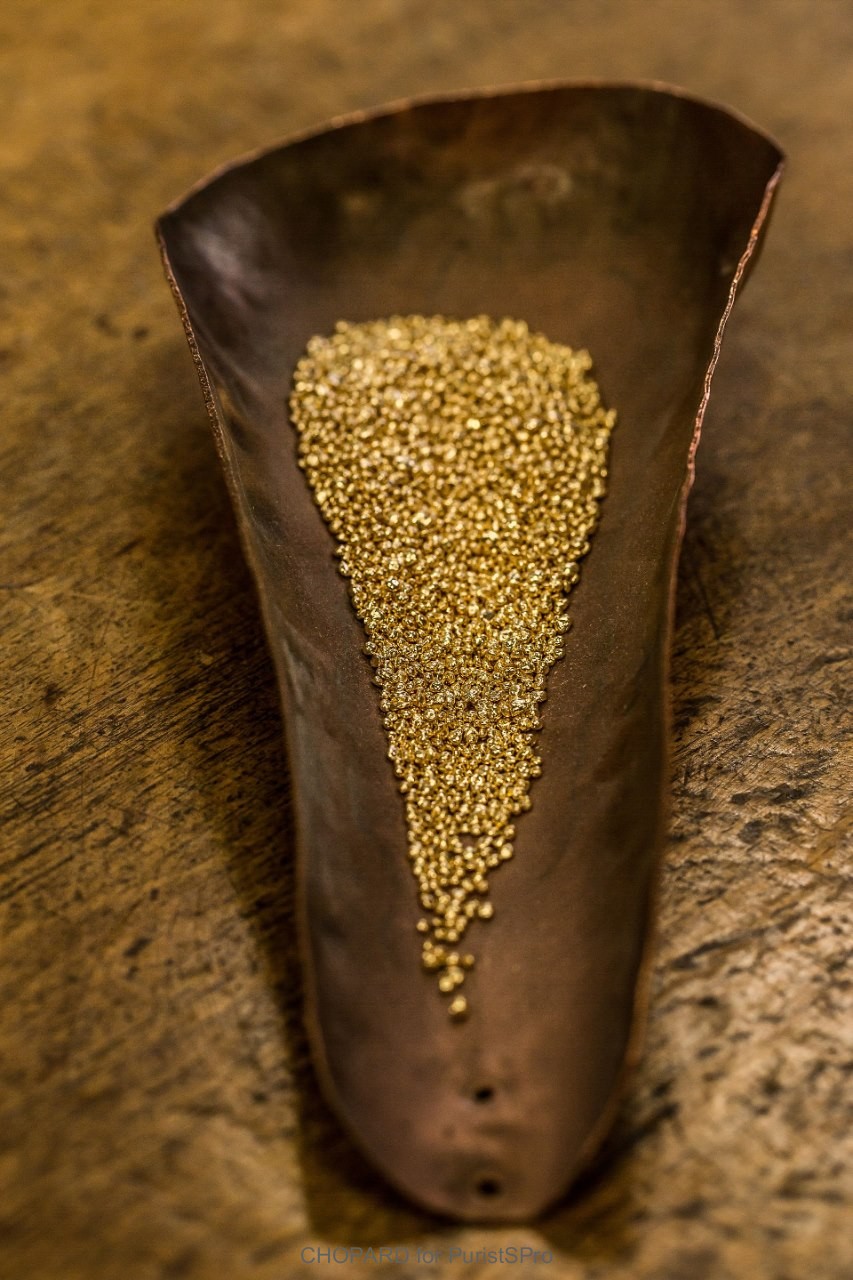 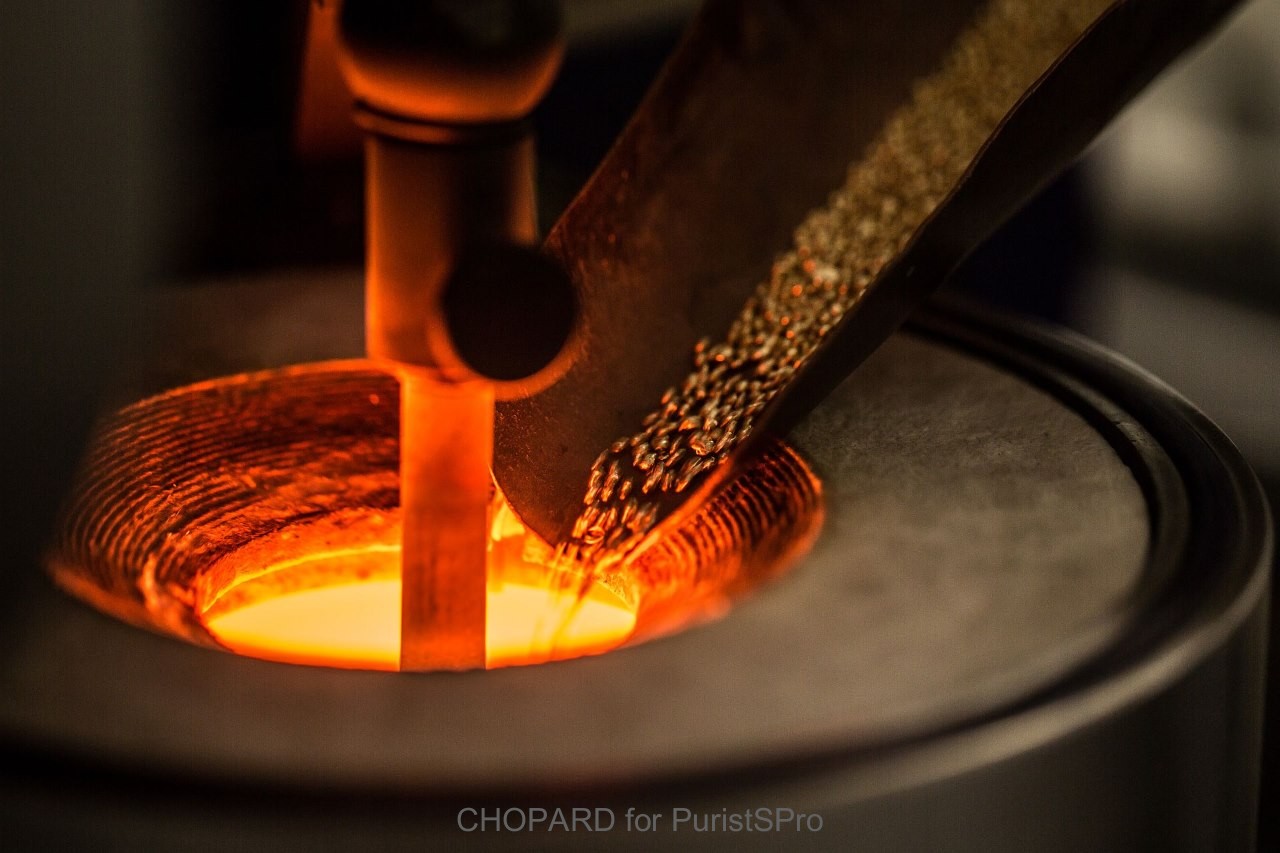 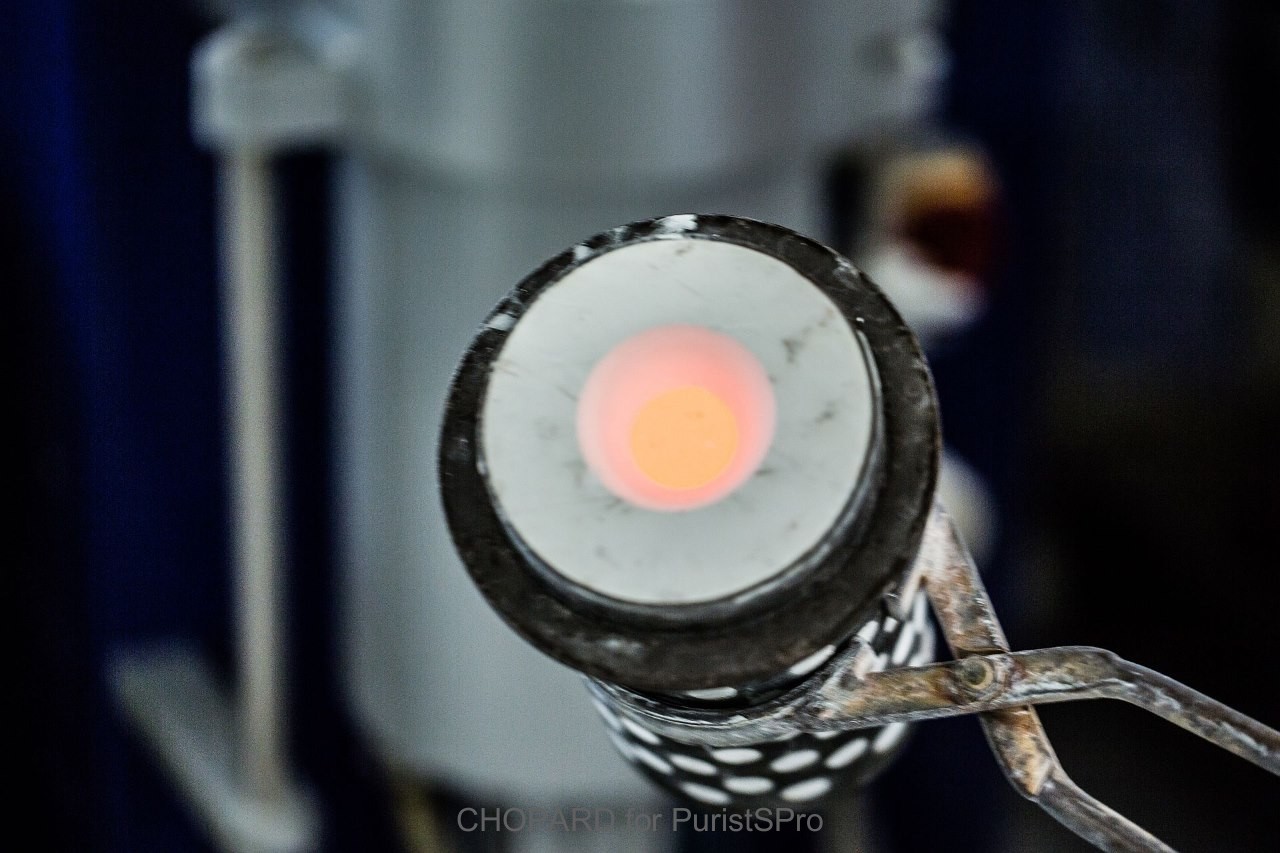 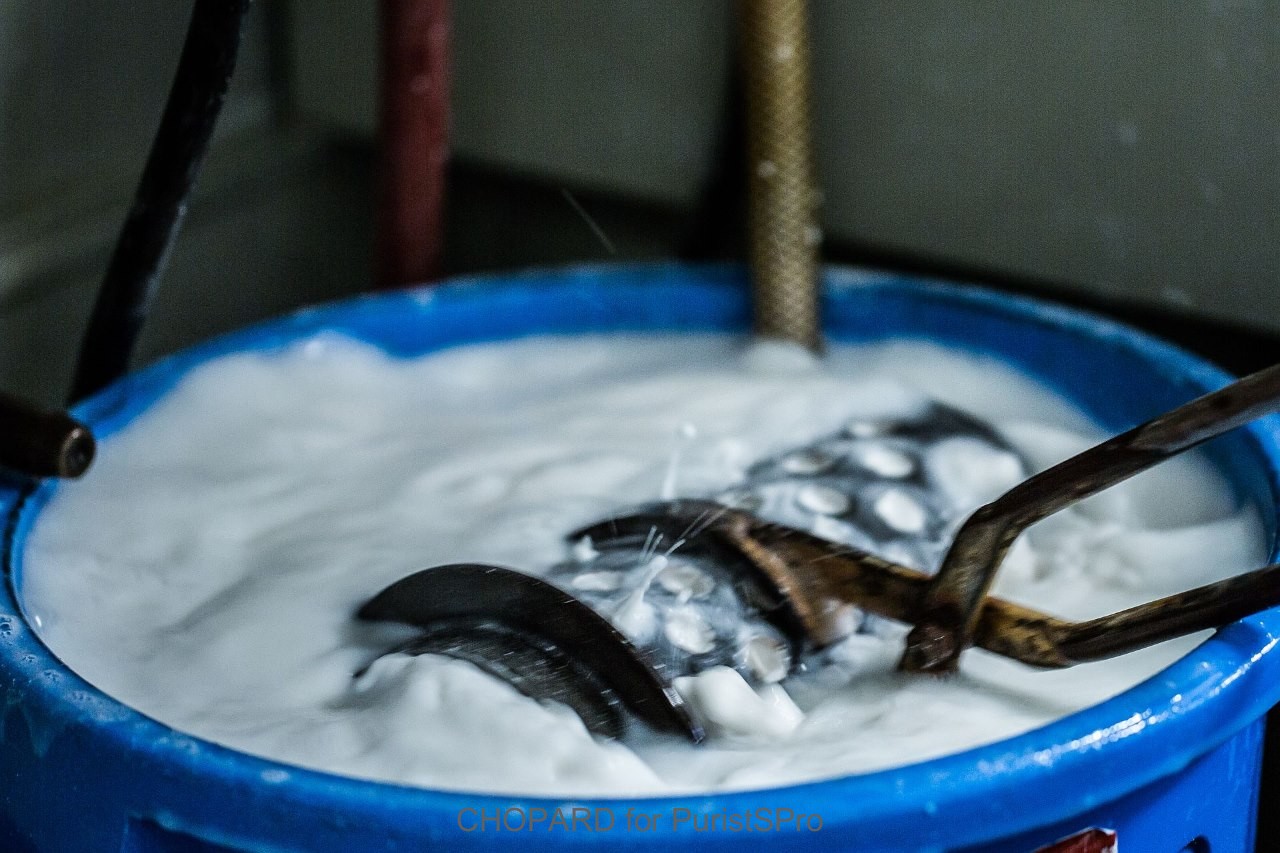 Washing away the refractory material 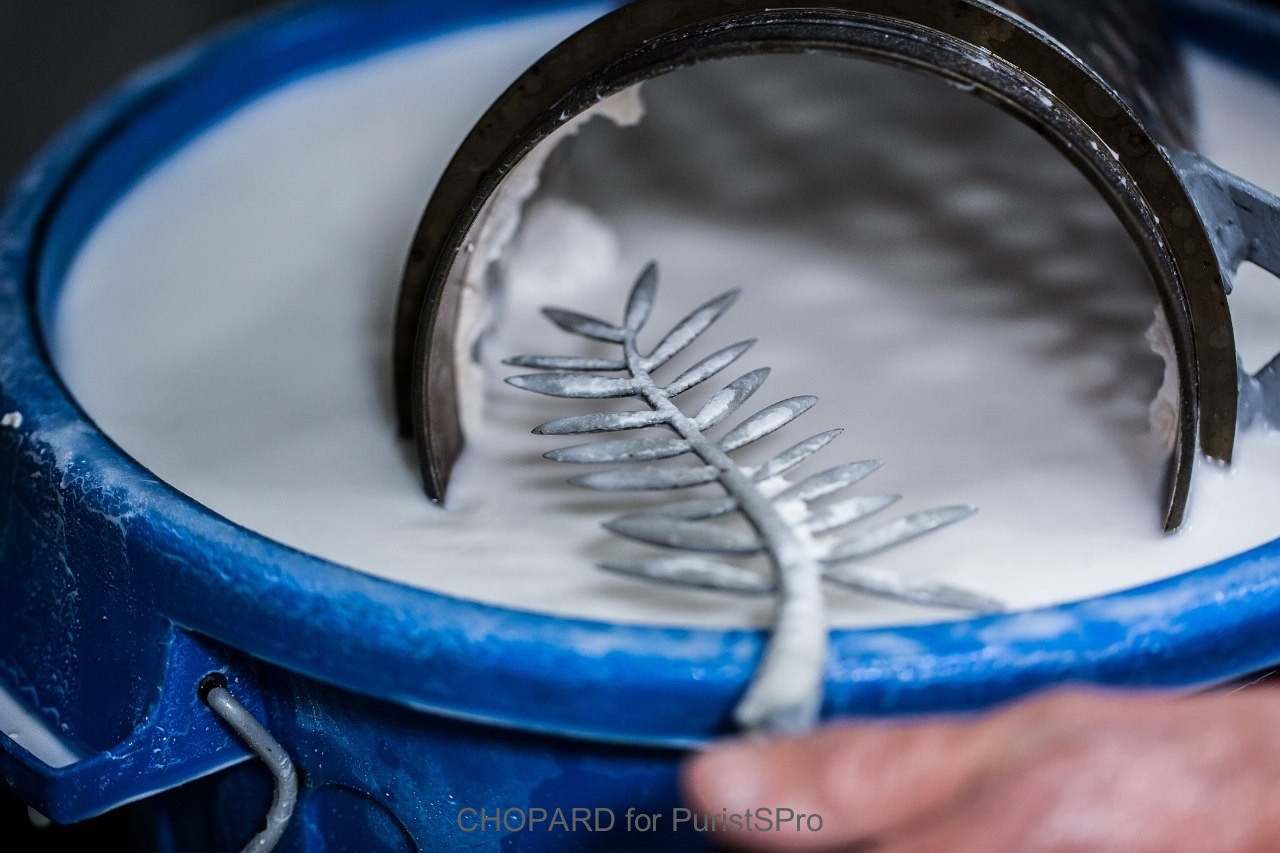 The plaster is broken and the “Palme” is washed under water pressure and deoxidised by acids. 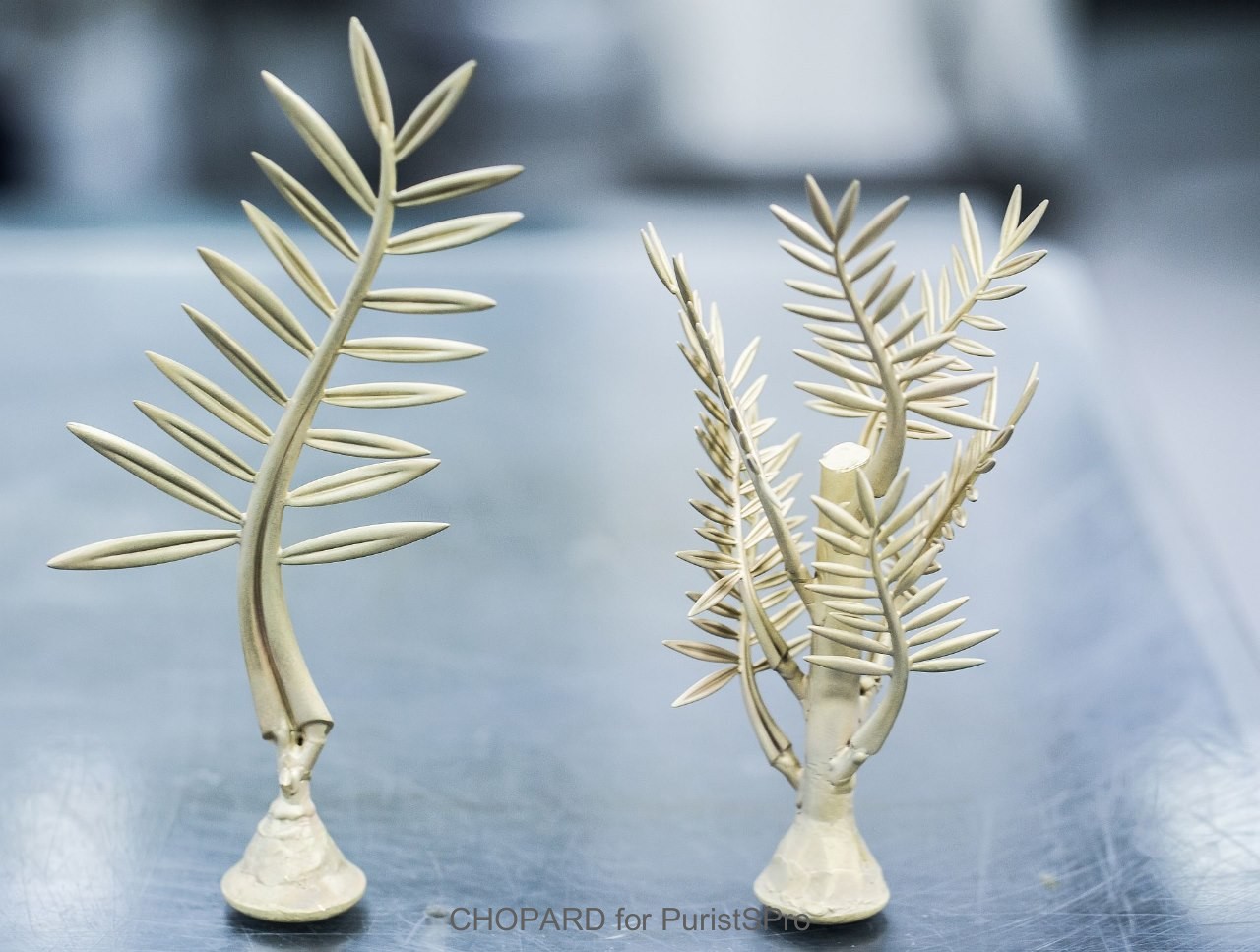 Meticulous correction of the leaflets and stem and then final assembly of the “Palme”. Each gold leaf is adjusted on the stem in its correct position and soldered with a torch. 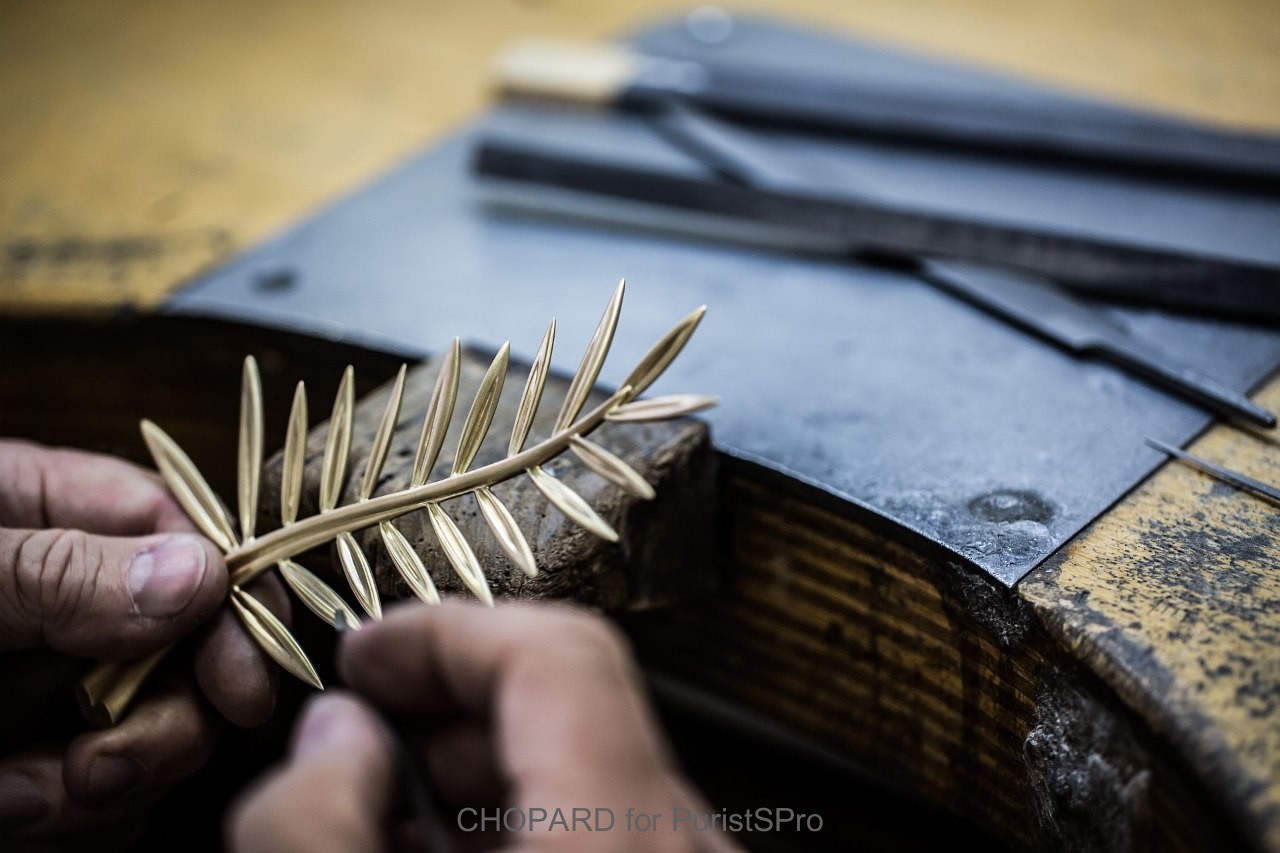 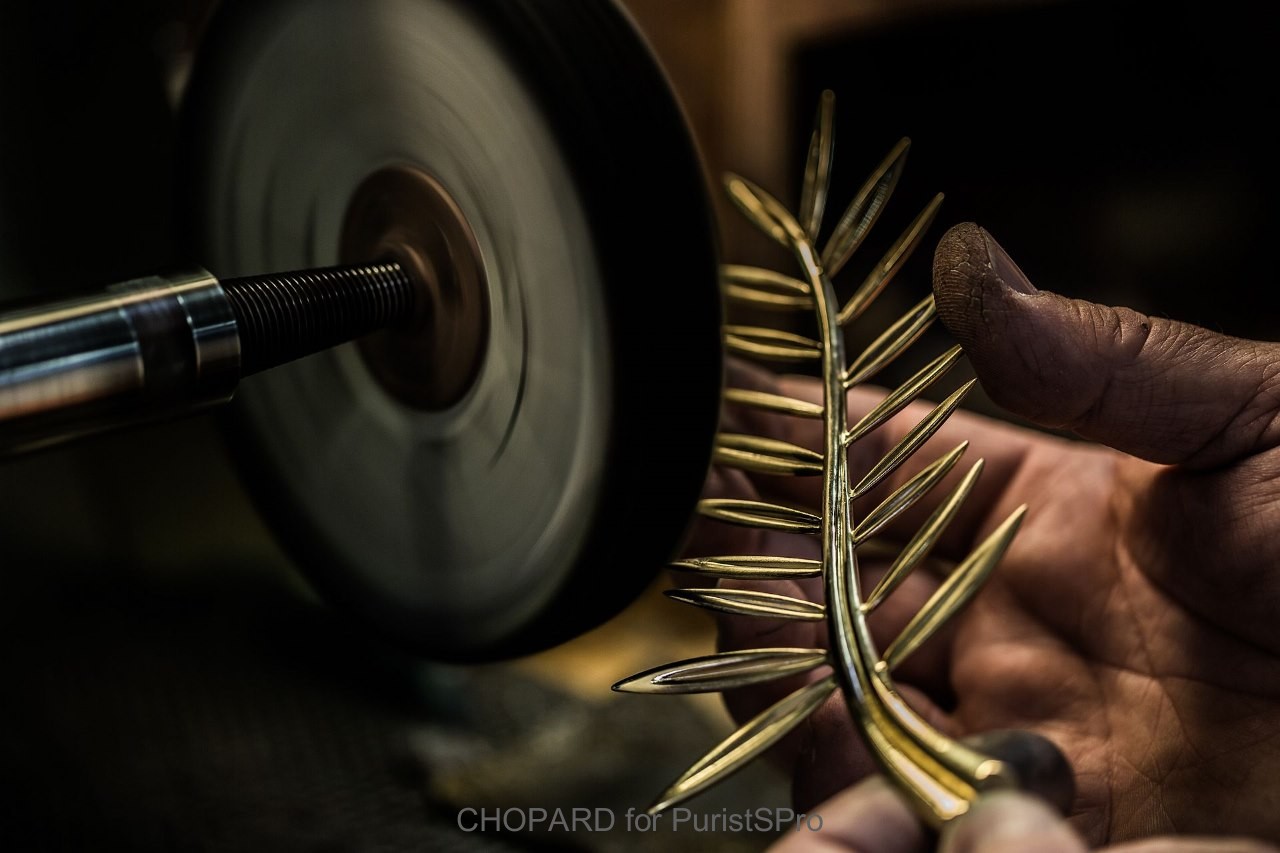 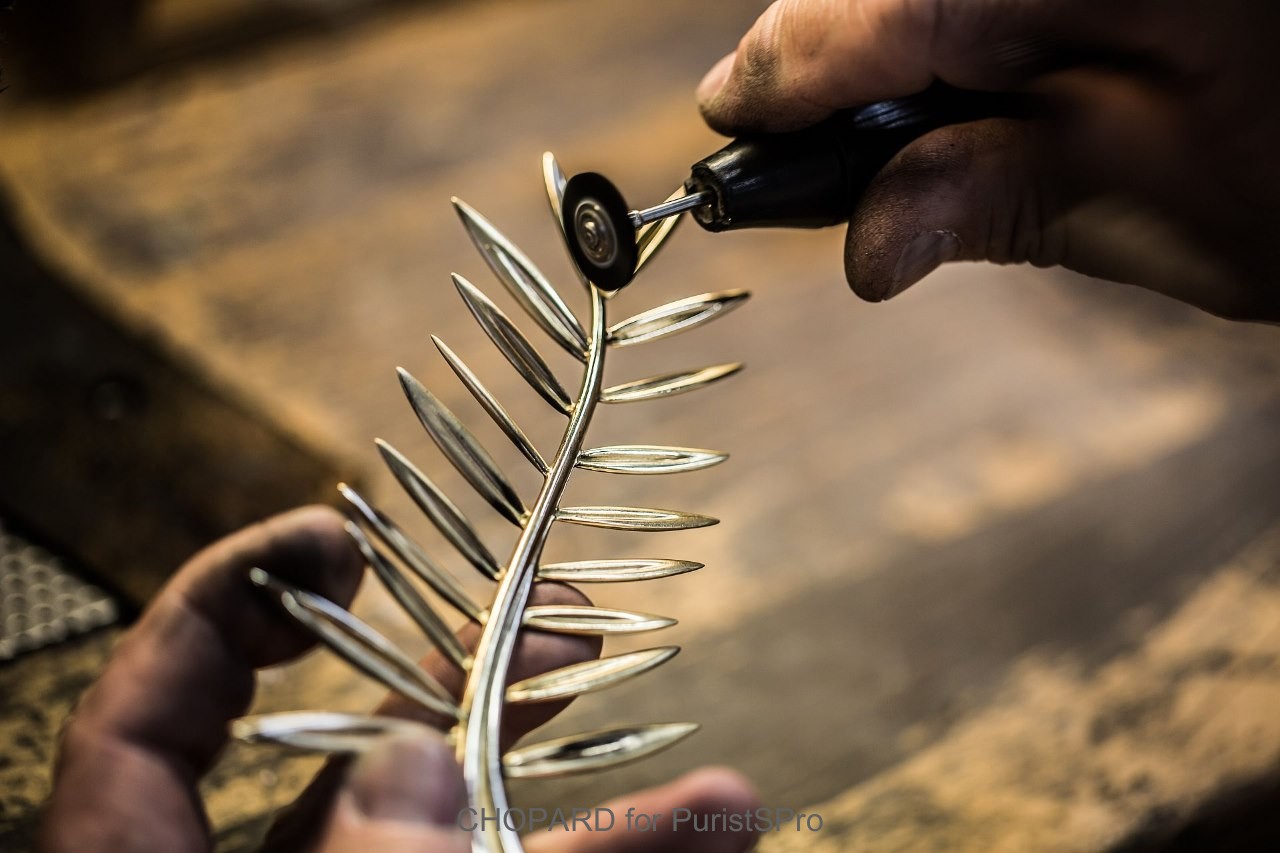 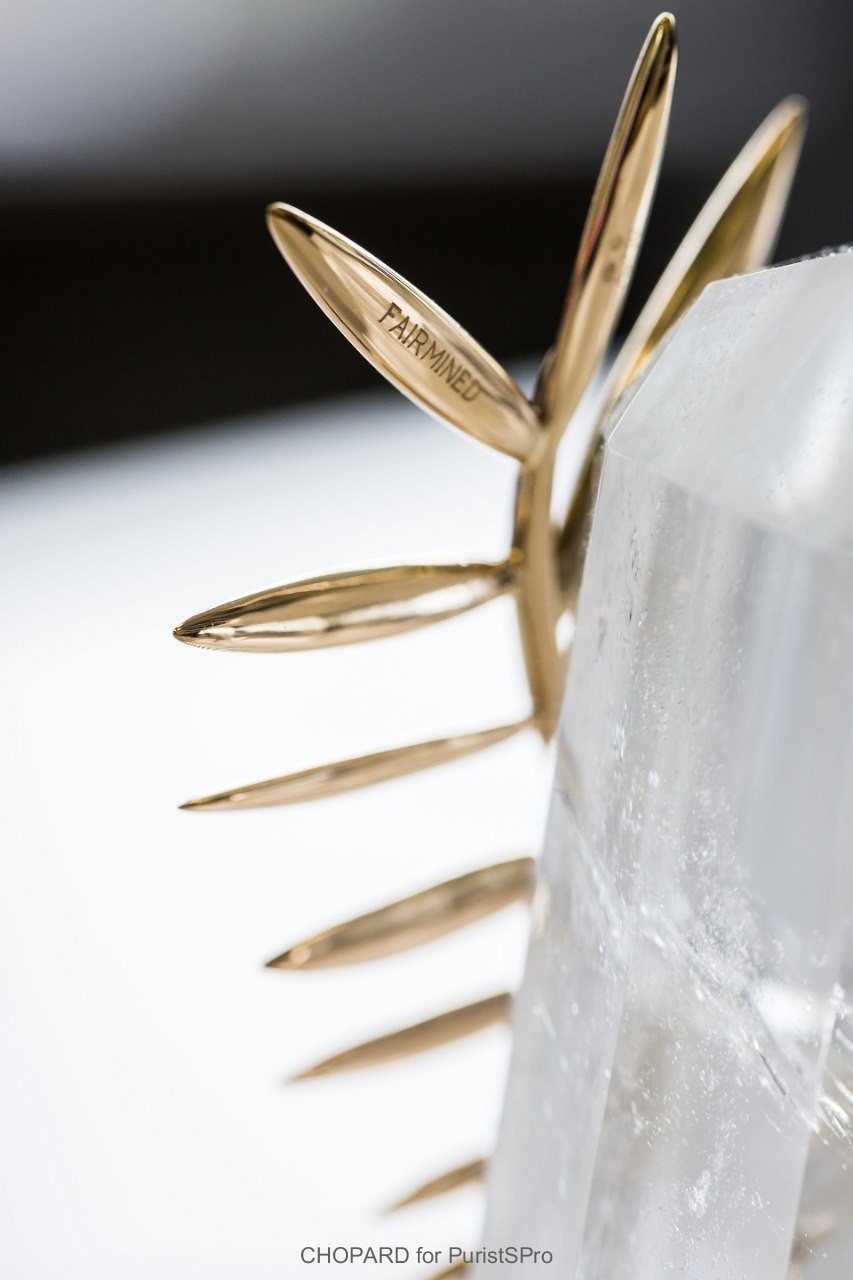 10. Drilling the crystal with a diamond milling-cutter to accommodate the small supports on which the “Palme” will rest.

11. Setting the “Palme” onto the crystal cushion 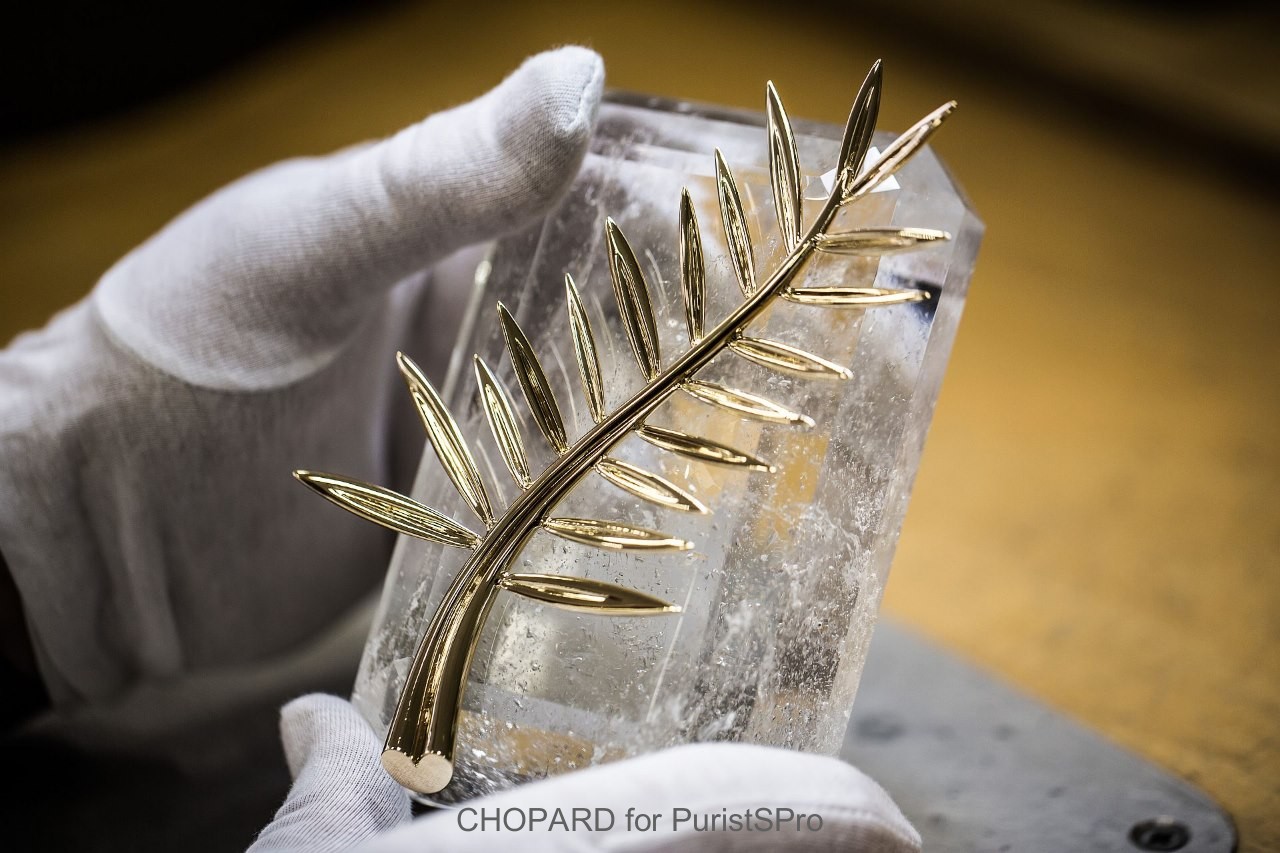 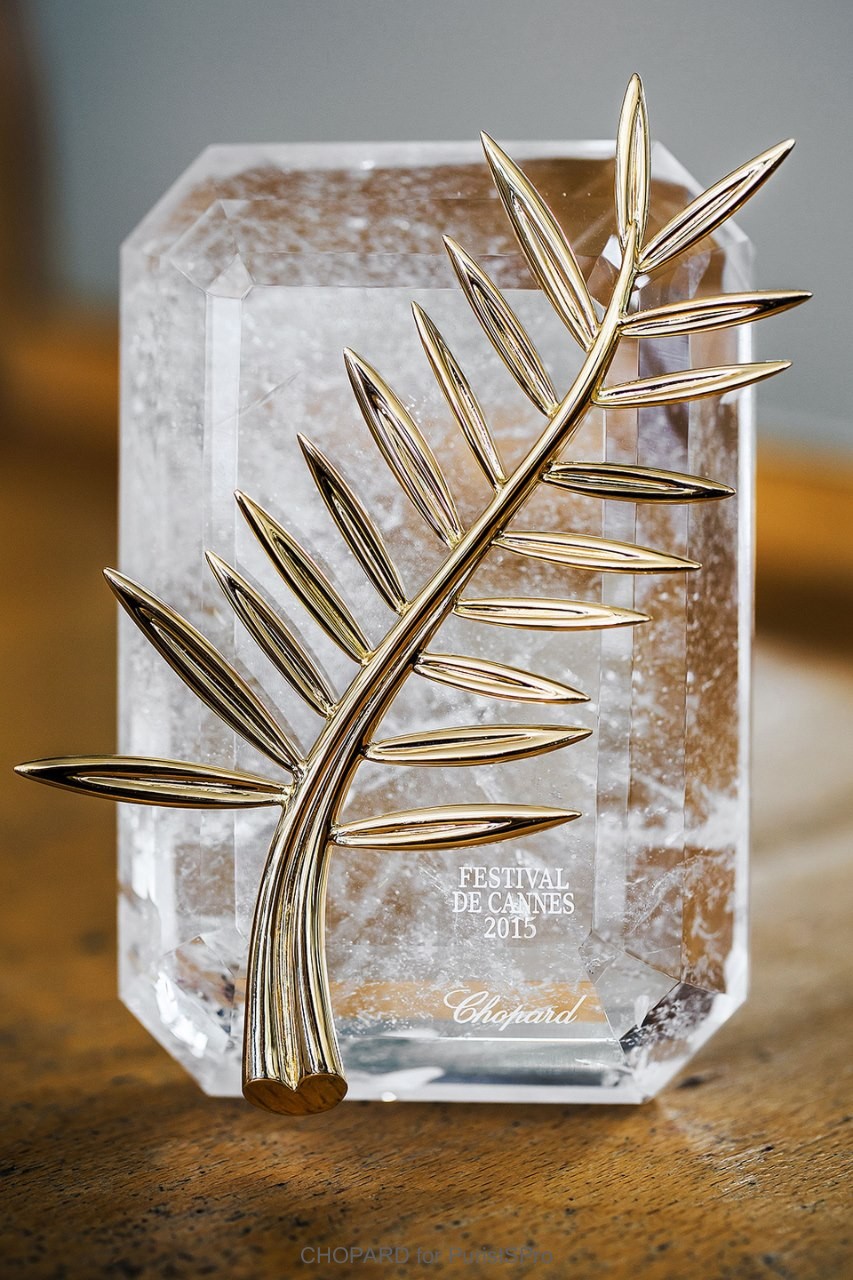 All the Technique and Aesthetic prowess at Chopard is applied to other products like your watches and jewellery.

That is why they can 'Do it Better' than most Houses.

By: MTF : May 28th, 2015-20:11
The Palme dOr is crafted by Chopard and celebrated its 60th Anniversary in 2015. Enduring symbol of the Cannes Film Festival, veritable grail for every film producer on the planet, the Palme dOr award for the best film in the official competition is cel...
login to reply

By: CaliforniaJed : May 29th, 2015-23:48
and they DO, do it better than most. In my humble opinion, of course! ;-) What a fascinating look at the process Chopard employs to make such a prestigious award. And what a beautiful result. Thanks MTF, for sharing the story. Best, CaliforniaJed
login to reply

By: MTF : May 31st, 2015-01:48
In Switzerland, where gold smelting is a substantial "industry" and gold standards have been maintained for centuries, very few watchmakers are allowed to smelt gold with their own hallmark. Personally, I know of a mass market watch brand that also does i...
login to reply