In this series we have already talked about the case back of the Géomatic, but we didn’t talk about the whole watch. 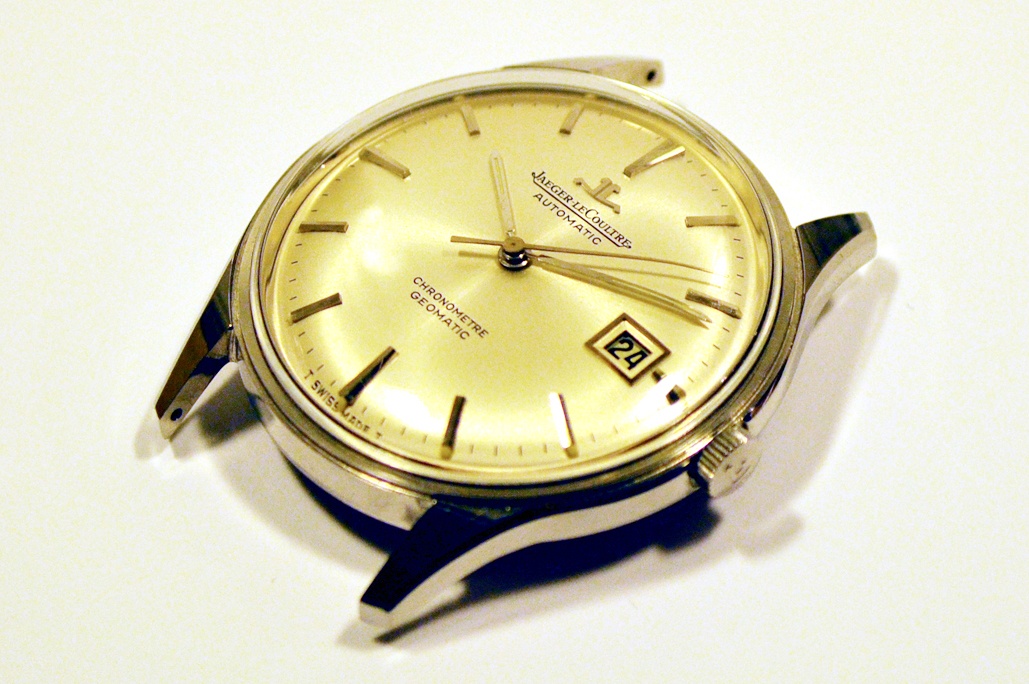 Not long ago Chris (Cuibono) asked about the MUT vs GO Senator.

Then Nicolas suggested the Géomatic (seconded by me and Patrice

This made me think it’s time to have a look at the Géomatic ads!

I think you have seen most of them before, but having a vintage ad series and leaving the Géomatic out is not an option, IMO.

For me this is one of the most elegant JLC watches from the 60’s.

The one I put on when I wear a tuxedo, having an important suit required presentation or meeting at work. 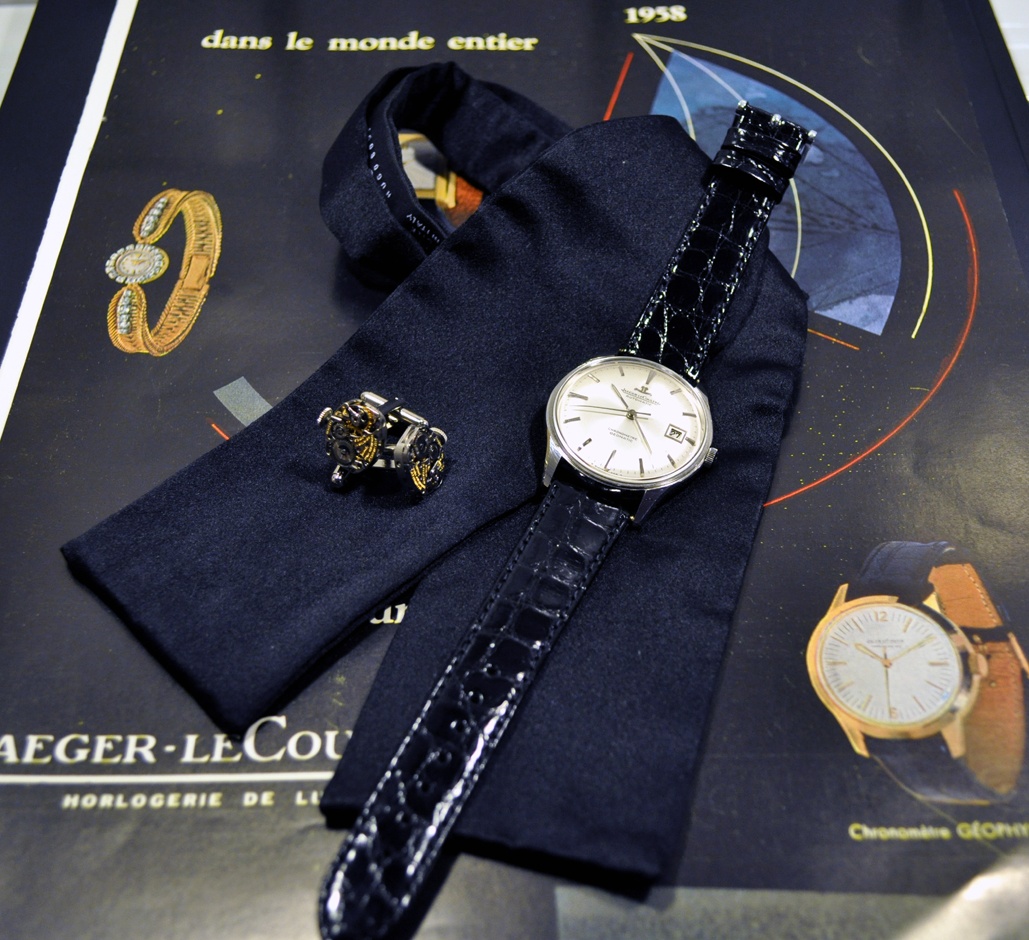 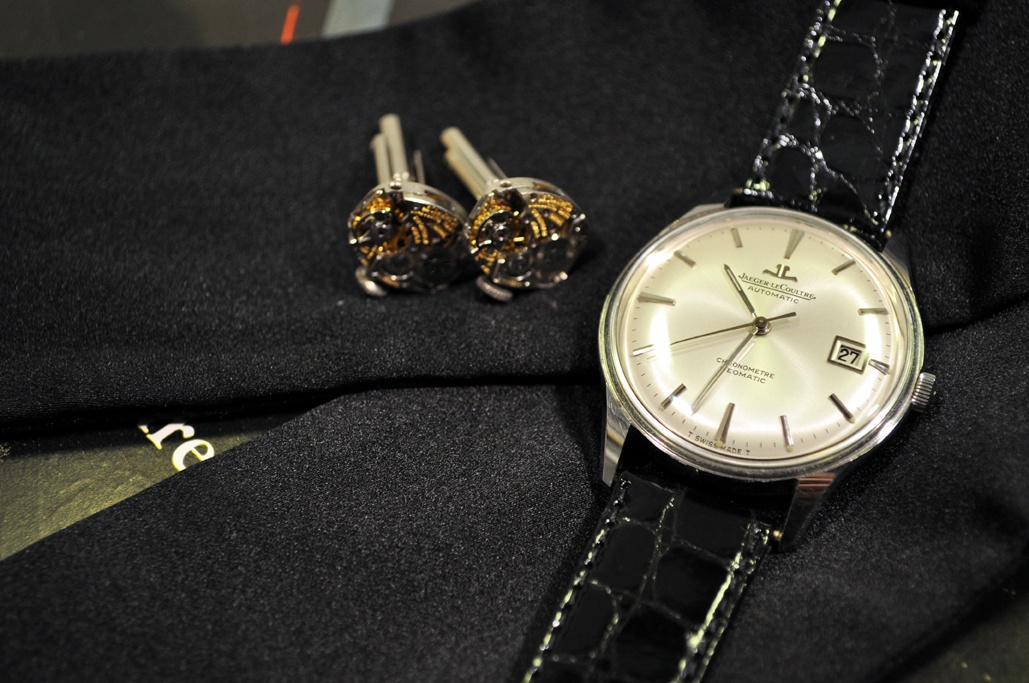 Almost as a sports watch! 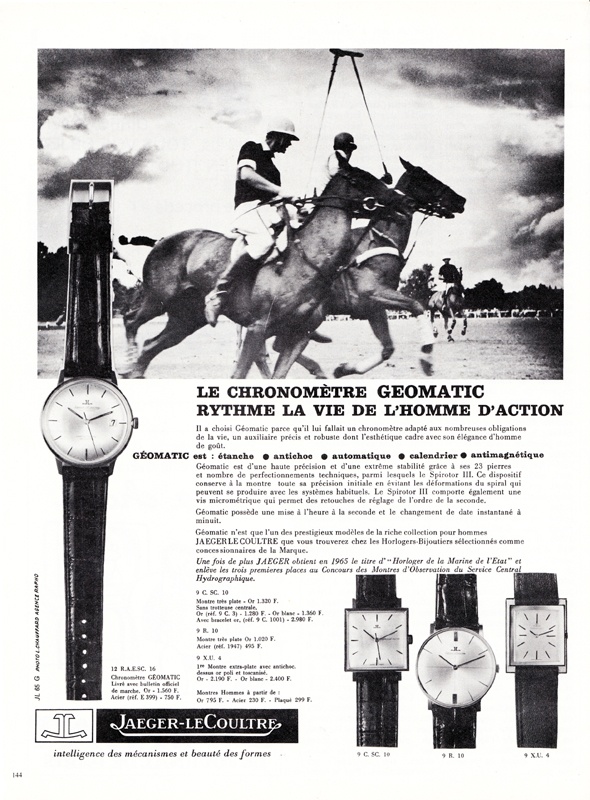 Another thing that you may not aware of are the features.

But did you know that it also is antimagnetic?! 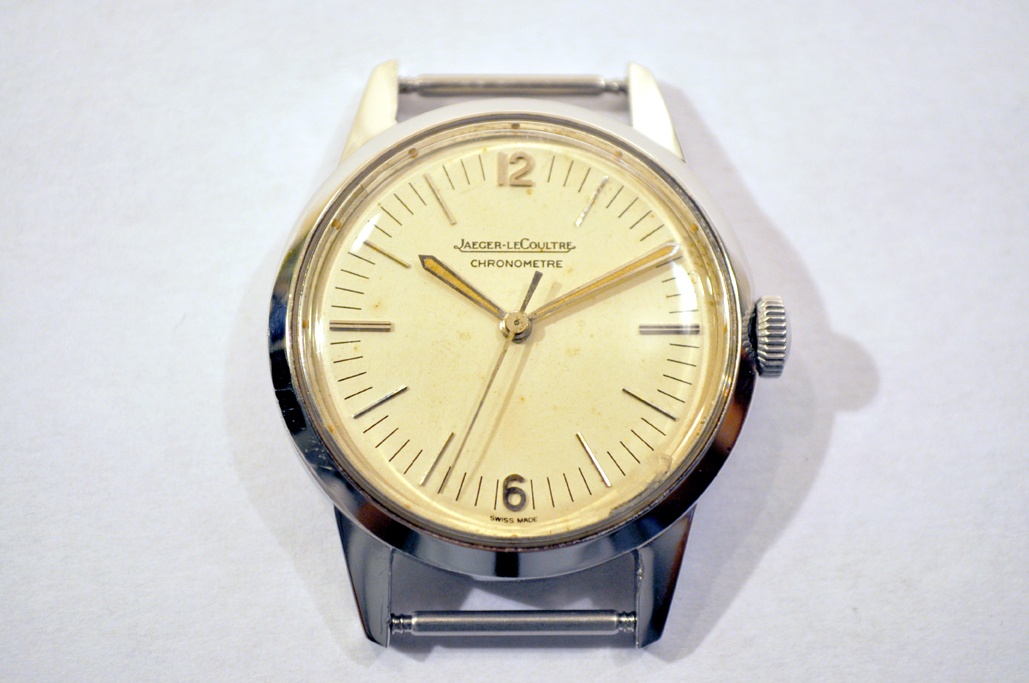 A fact I didn’t know when I got the watch! 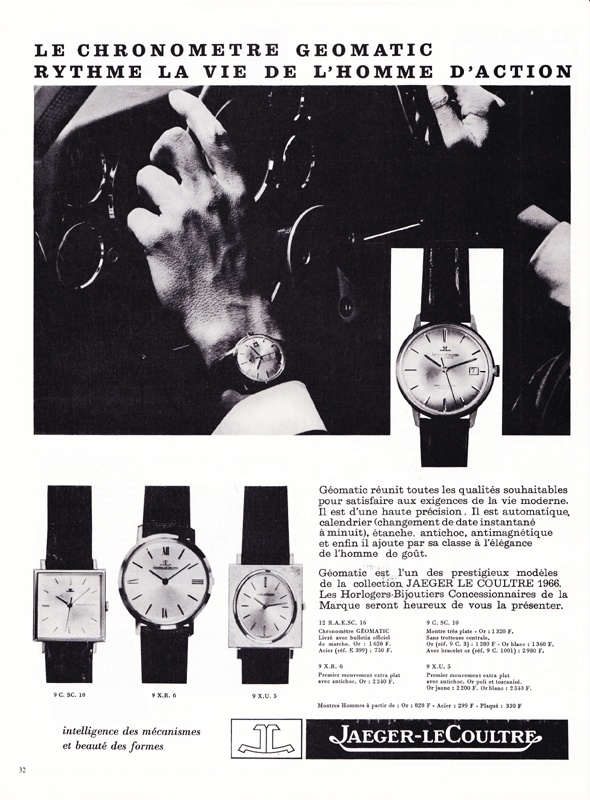 One of my favourite JLC ad series is the woodcut ads. 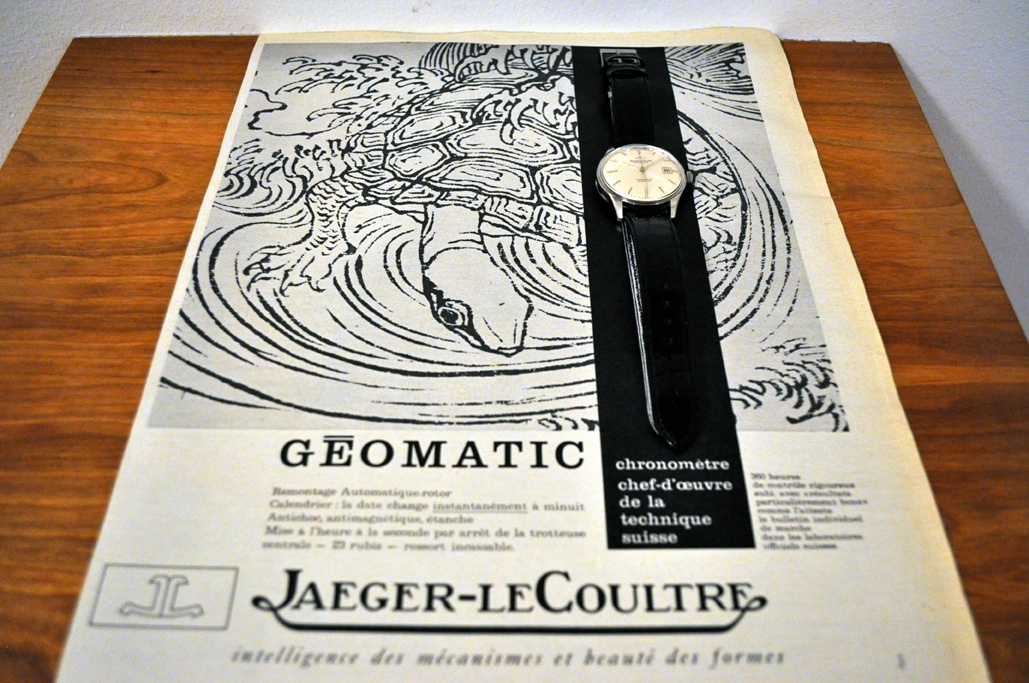 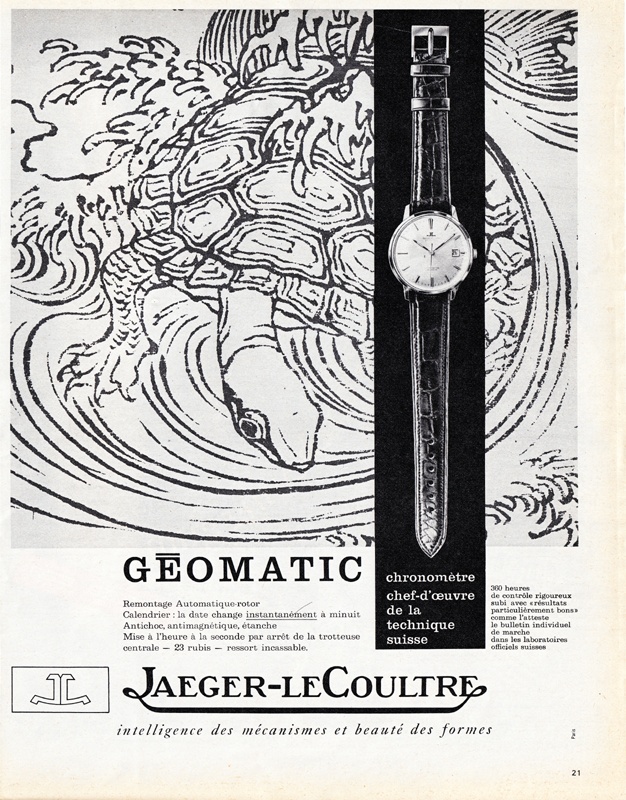 Interesting is that almost all information I have found so far is in French.

No trace of the Géomatic in any of the LeCoultre documents I have.

Was this because the Master Mariner line was so strong in the US?

So JLC reserved the Géomatic for the European market?

Another very appealing ad series from the 60’s is the ancient Greek stone series: 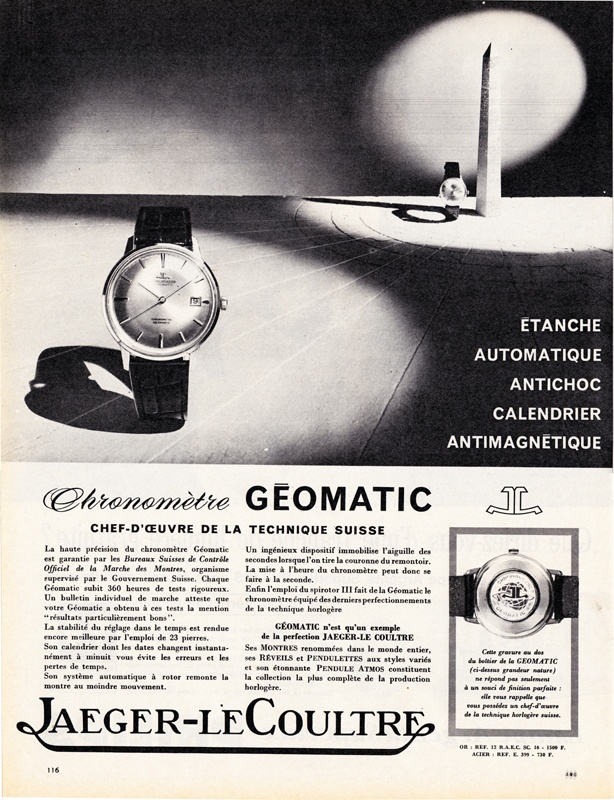 In this ad the case back is shown. 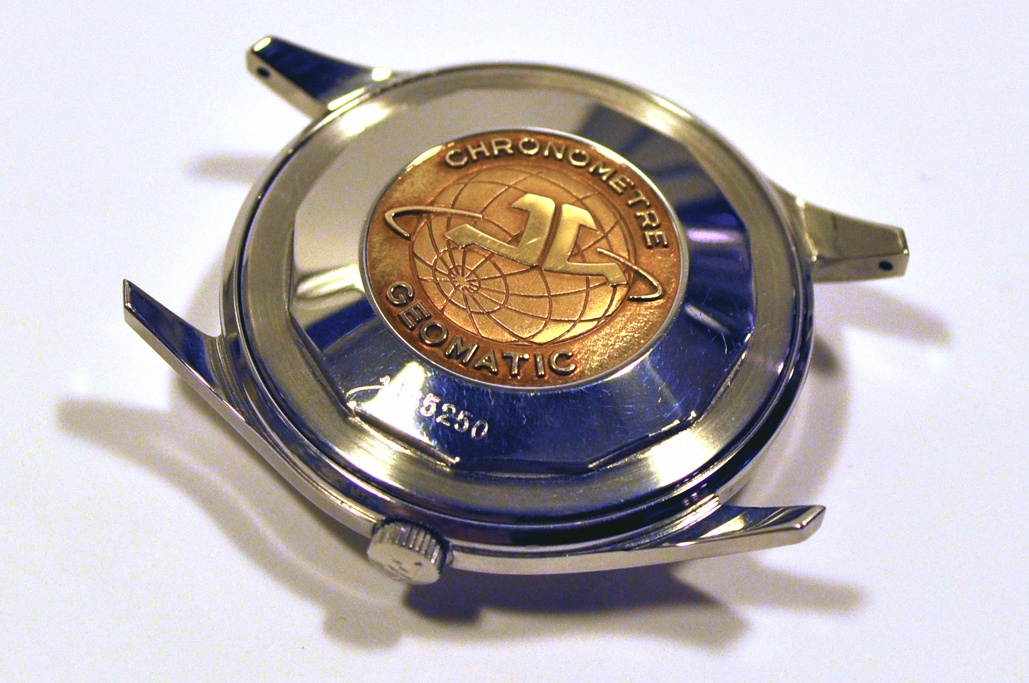 But AFAIK the Gold and the SS had the same ref French vs. Worldwide. 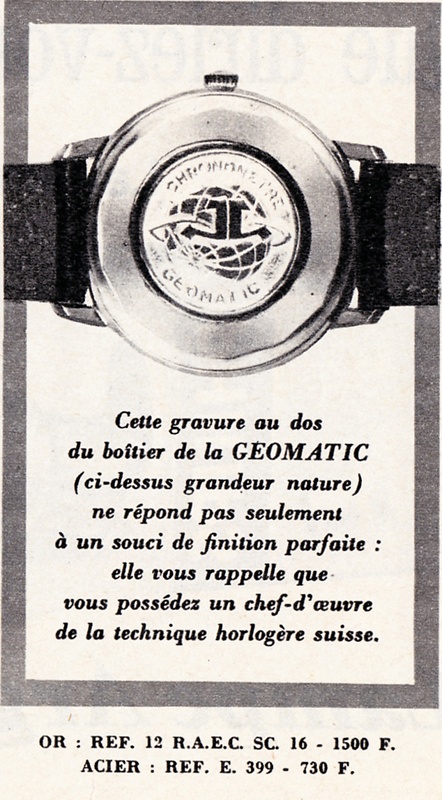 The Géomatic was at the same time as the E 855, a watch I will come back to soon. 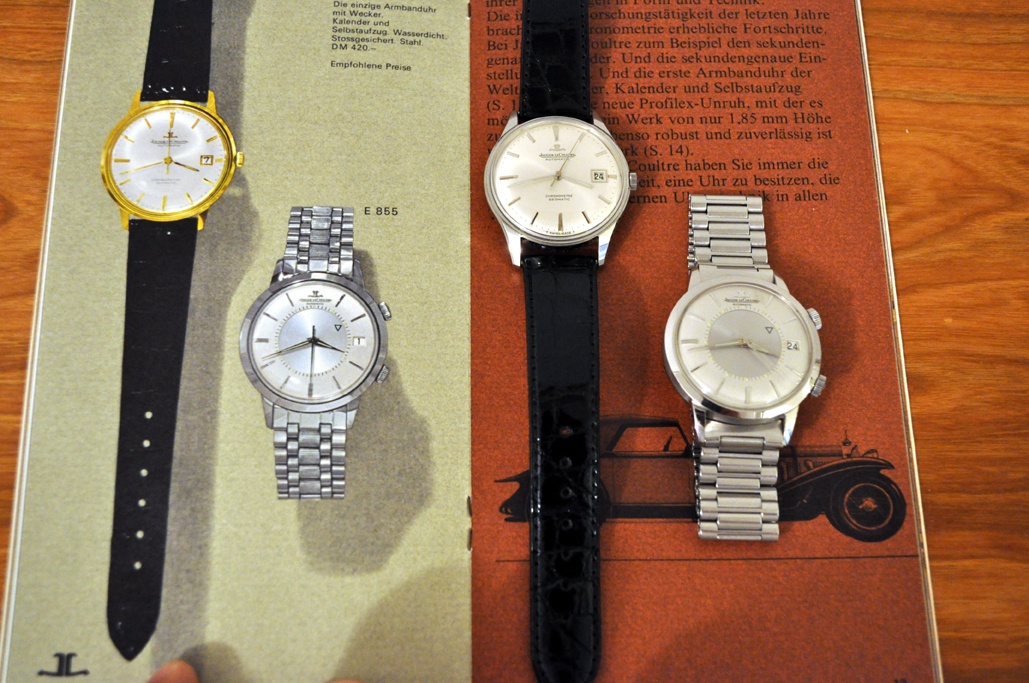 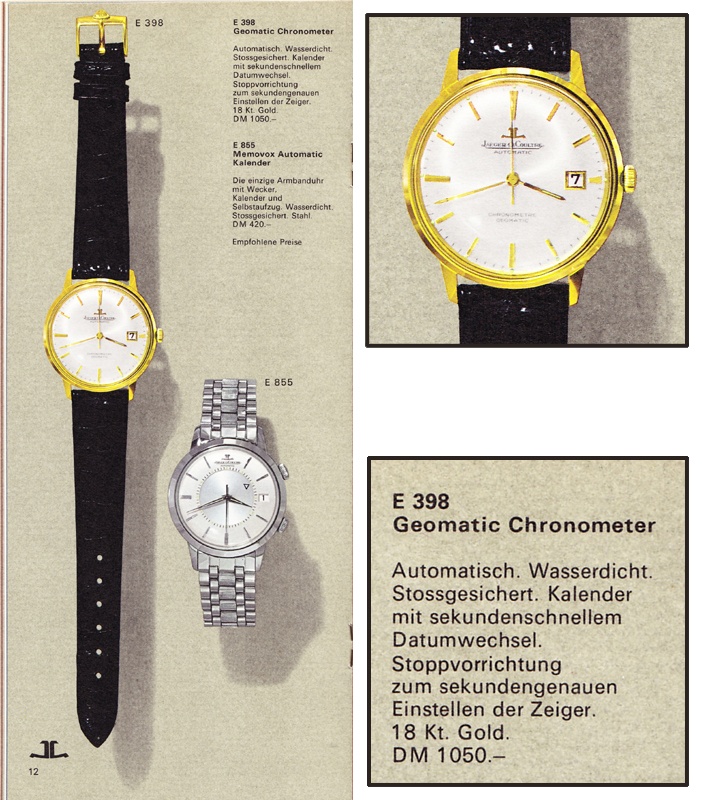 Here the hack-second feature is mentioned.

But what surprises me here is the reference: Ref E 398 !?

Misprint, or is there a difference from the “normal” E 399 Géomatic? 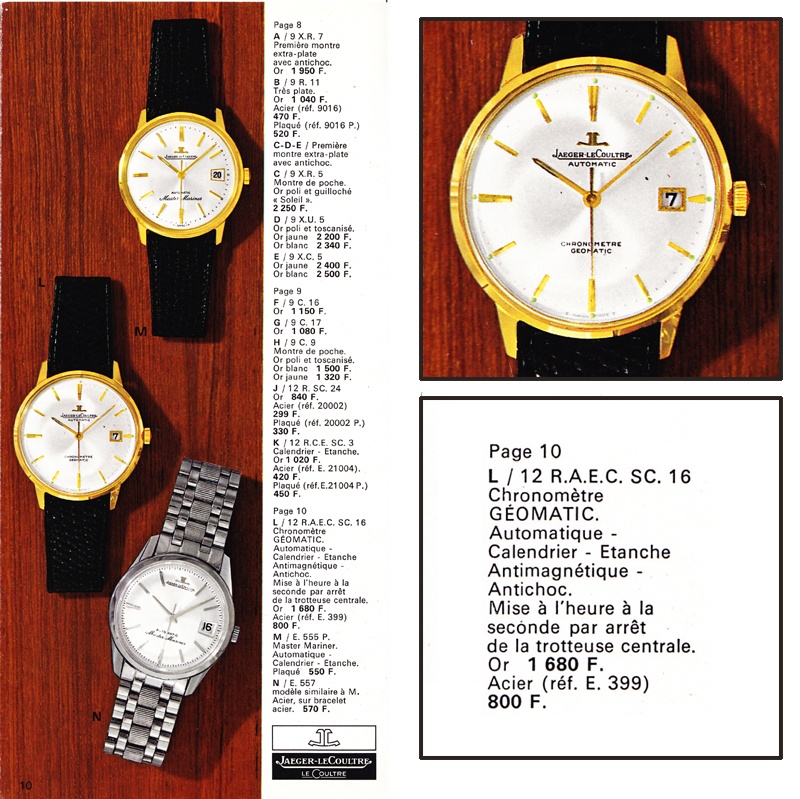 Again the text is written so you might think the Gold and the SS has different references?!

Did you notice the price?

Well, to read these old ads gives a lot of information, but also a bit confusing…

A lot of question pops into mind…

But one thing is for sure – there are always nice slogans inside!

How about this one: “chef-d’oeuvre de la technique Suisse” (Masterpiece of Swiss art)… 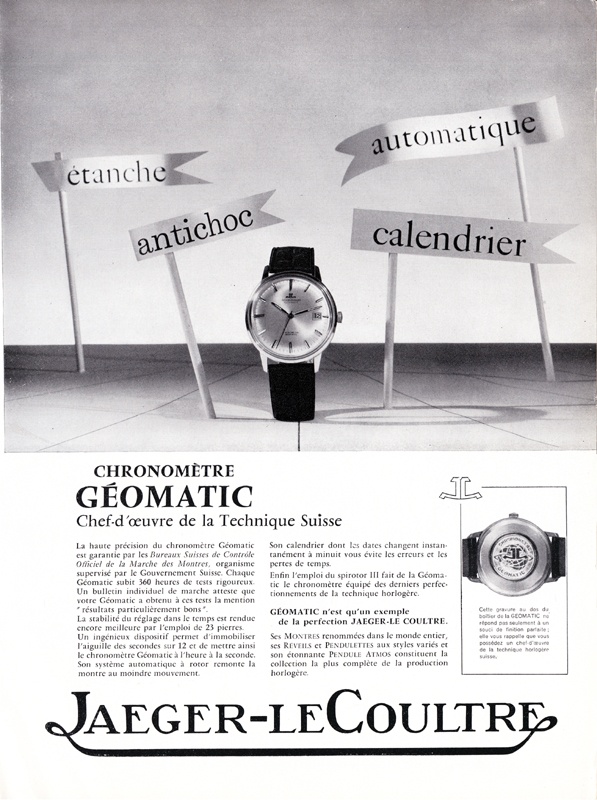 Thank you for reading the Part #7 of this Vintage Ads Series.

By: sancerre : August 2nd, 2011-16:28
But I think I might have a grail watch. The Geomatic is EVERYTHING I could ask for in a watch. Thanks so much for sharing Blowman.

The Geomatic is a grail, IMO.

Thank's for the very interesting posts about JLC.

It truly resembles for me at least, a convincing balance among many watches I know from JLC,
a very special one as well - as it is not only an absolute beauty but a Chronometre !!
- (if it has the same precision, I am not sure)
Possibly, no likely only surpassed by the icon, the epitomic Geophysic,
which has those elements of uniqueness and historical significance connected,
(and representing a piece more on the precision, the scientific side, I learned)

As per to the ads, I at times have the feeling, that JLC pursued several lines, various
statements with and for the watch, not always coherent and different we tend to perceive it now
- I personally would not link this watch with a lot of 'action' or sports, nor would I use it for those;
the ads with the obelisk, serence contemplation, I can more relate to, find it more logical.
I think, also Nico made a fine point , there

Thus, I also occasionally thought, the Geomatic is at times maybe a bit understated
, for sure one with timeless beauty:

Somehow, for me this is a sort of 'gourmet' watch, a piece for the connaisseur,
a piece to strive for or hold, but likewise admire and cherish.

Not long ago, I had the pleasure to see one, and the sublime impression in real, whereby it
all around convinces you: appeal, proportions, balance but also it effortlessly resembles some special
significance with, how shall I say, understated presence, that is so convincingly 'low key',
but elegant with nonchalance, with knowledge of being - special..

In a way, silent knowledge of representing more, much more, than one would assume on first sight:
- thank you for making this again a deserved subject in your fine series.

A piece many of us love, I am sure - your post again highlighted that nicely.
Warrants to lookout for one with intensity or cherish one, if you belong to some happy owners..

PS: - what I always also enjoy, is seeing the Geomatic and the 'absolute goddess'
the Geophysic back to back, or even together.. Summit Meeting ..
- had the thankful pleasure to see both in real together at meeting a kind friend, 'you-know-whom'. This message has been edited by hs111 on 2011-08-02 22:30:47

Many seek the Geophysic…

To me the Geophysic and the Geomatic are like twins.

You can’t have one without the other…

They complete each other!

Thank you for your thoughts, my friend!

Next time you come, I will show you my RG Geomatic, and we'll compare it with your SS. You will notice that the shape of the lugs is not the same, at all.

Now, as for the Geomatic being an amagnetic watch... What I think is that the marketting exagerated a bit the antimagnetic virtues of this watch.

To me, and AFAIK, the only  part of the watch which is antimagnetic is the escapement, and I would be very surprised that the Geomatic qualifies as an amagnetic watch, at the contrary of the SS Geophysic.

Another funny detail is  in the ad " the man in action " series.

One features a horseman, more precisely a Polo Player... Which is a bit in contradiction with the roots of the brand, as Polo was historically linked with another JLC watch, the Reverso.

The other is more appealing, to me, featuring a Driver. I would be very curious to know what car is this one. A Facel Vega? The Dashboard is really cool and suggests Gran Turismo.

Anyway, the Geomatic is a great and very elegant watch, not as mythic as the Geophysic, but, in my opinion,  more elegant.

A watch to rediscover, and the ads serve this purpose very well.

Thanks a lot, my friend, for another reference post.

But I did a comparison and could not see any difference. 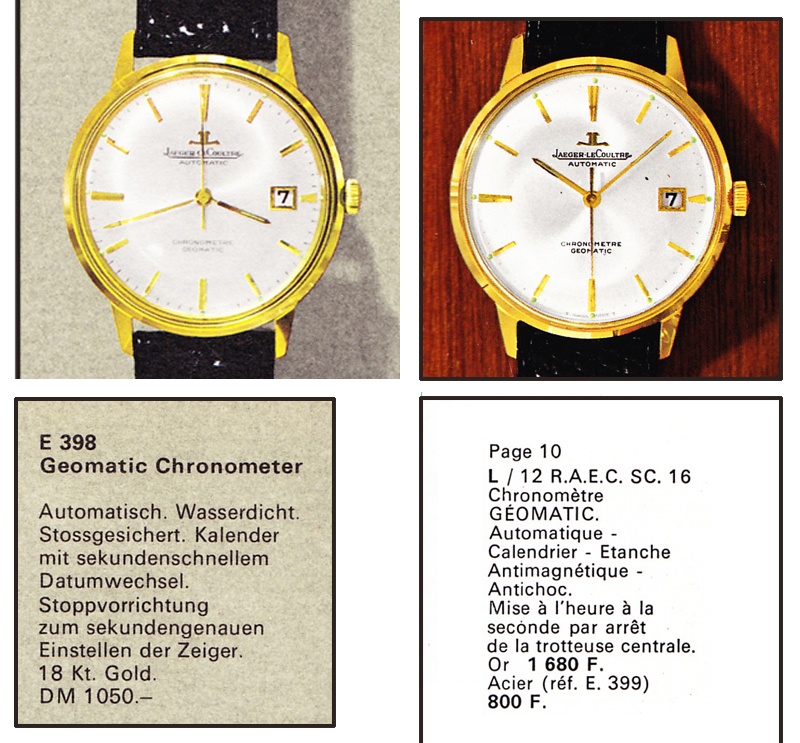 About the Polo ad – maybe they choose this one because of the Reverso link?

During the 60’s the Reverso was discontinued…

Have an awesome vacation!

I already looking forward to your roof shots…

Yes, the planet-sphere is something I wish JLC would start to use again…!

Hope you have a great vacation!

By: Asimut : August 3rd, 2011-00:18
I was always under the impression that there was a gold-filled LeCoultre version but of course I cannot find anything in writing.

I never saw a Geomatic badged LeCoultre, nor gold filled....

However, the JLC version of the Geomatic may have been sold in North America in limited quantities as a specialty watch.

Do you have any more info or document on this?

and never found any info about a LeCoultre Geomatic…

But during this time LeCoultre had another chronometer.

Thank you for your kind comments, Asi!

Thank you very much for another very educative post.

Quick question: What are the Géomatic dimensions?

But it feels much bigger on the wrist.

Always so kind – thank you, Nilo!

Thank you for your nice words!

... another well-thought post. i like those questions you raised, very interesting and confusing somehow which makes us like to find out more about the MJLC history of these great vintages.

About JLC – the more confused I get and more questions I have!

Luckily, IMO – the search for info is a big part of the fun!

Happy you liked it, Stefan!

Hope to be able to keep this kind of posts coming…

The geometic is a classic among classics, refined, elegant, timeless and reliable. It is a very valuable and original dress watch. I rate it on par with the pie pan connie and the date just. Movement wise the finish is excellent and the quality is what you can expect from a jlc which means top notch.

That would be a great topic for the HoMe forum.

Anybody that have all three to make the comparison?

By: Ubik : August 10th, 2011-03:59
A wonderful addition into what has turned out to be an amazing series of articles Blomman.
Thanks so much for sharing them - wonderful.