Now when I have opened my “black book” for you, or actually my black books…

I better get the ball rolling because as you can imagine, I have a lot of material for this series…

And it will take some time to go thru… 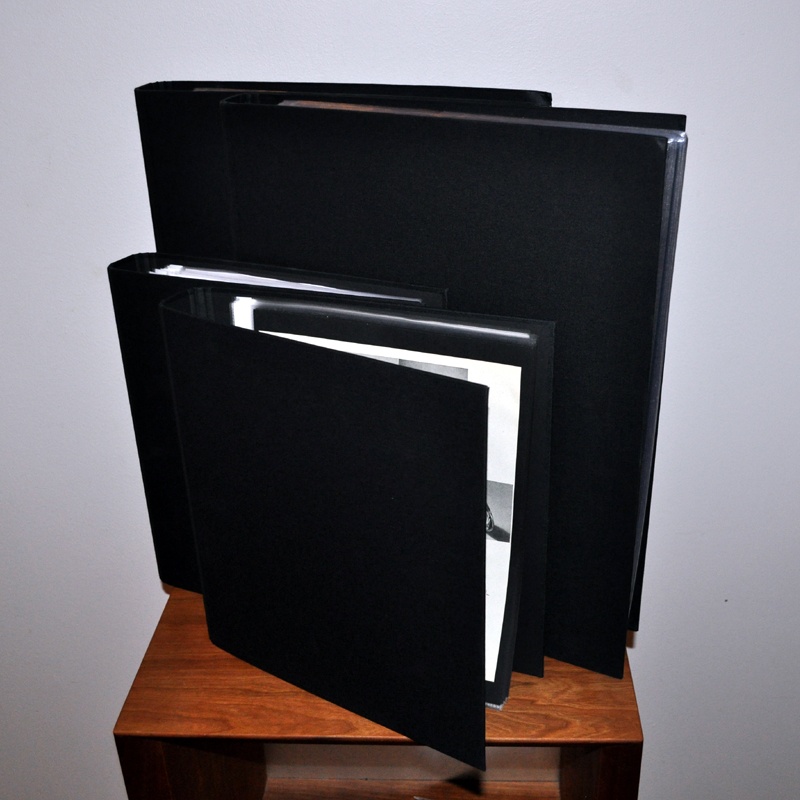 You know my unconditional love for the Memovox! 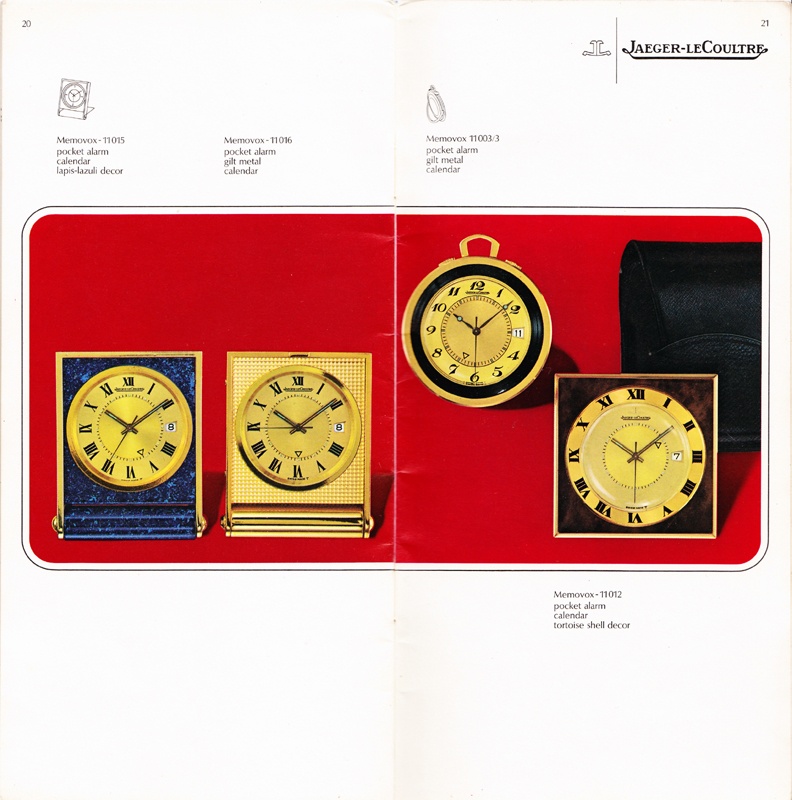 So, what separates a MPA from a Memovox or an Alarm clock?

Well, the MPA is meant to carry in your pocket, put on your nightstand or your desk in the office.

The movements used in MPA’s are the same as in the wrist watch Memovox while Alarm clocks often use “simpler” clock movements. 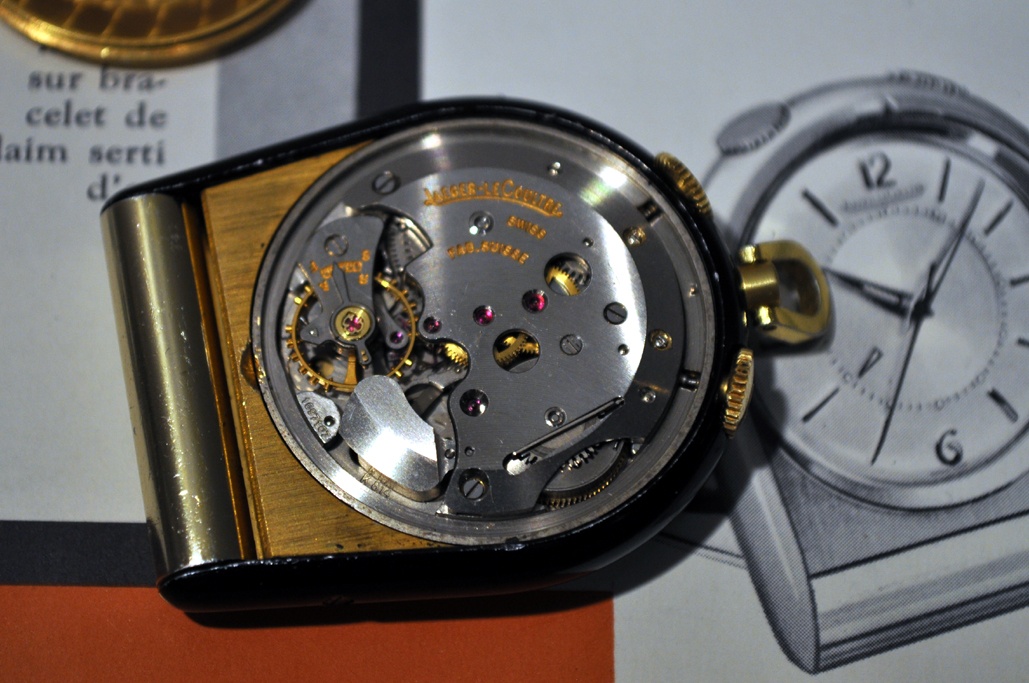 In the MPA’s only manual movements were used, with or without date.

Earliest trace of the MPA I found is from the mid 1950’s and they were in the JLC catalogue until mid 1970’s. 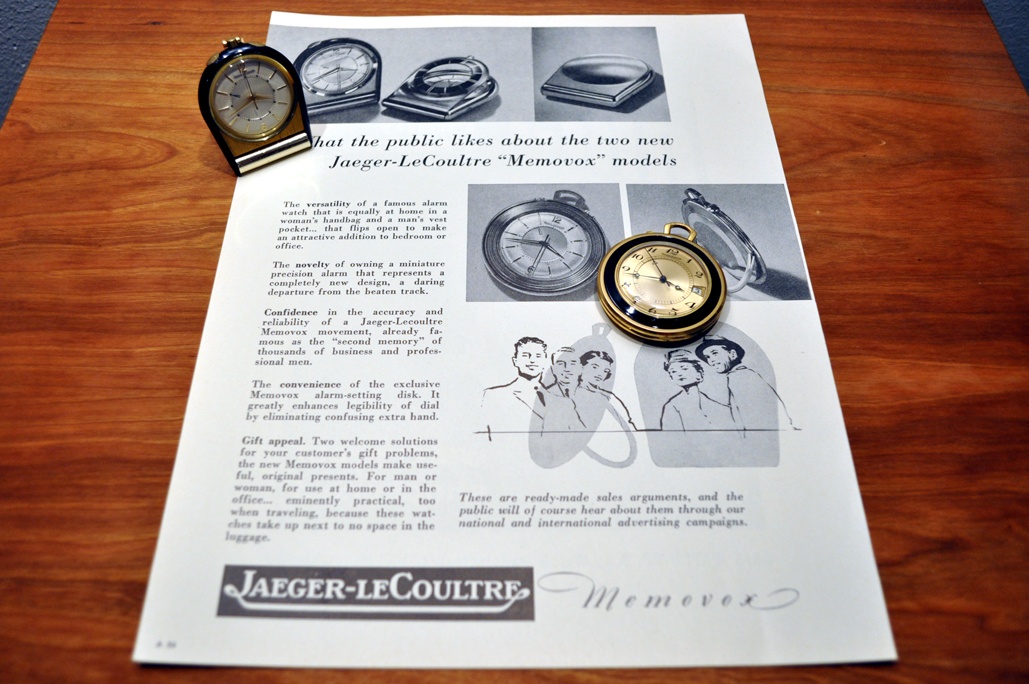 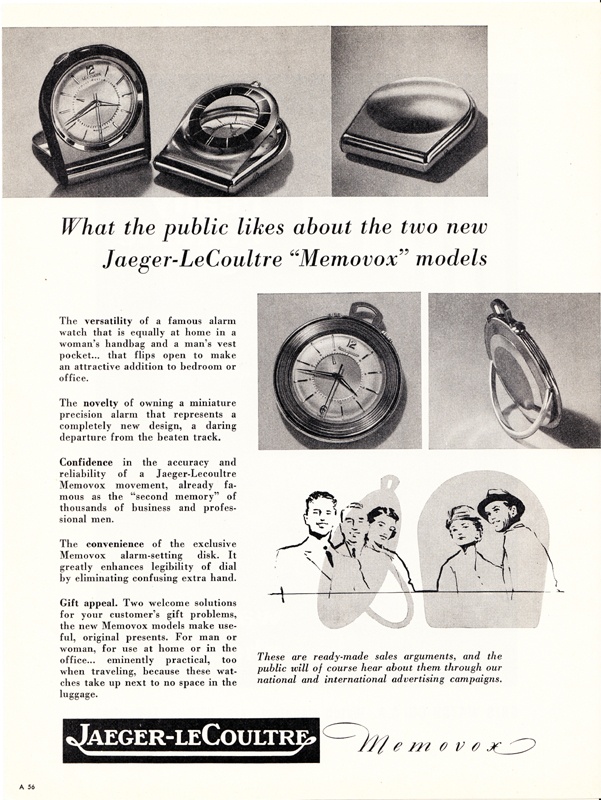 Different way of placing the watch upright, this one has the same construction as the Ados. 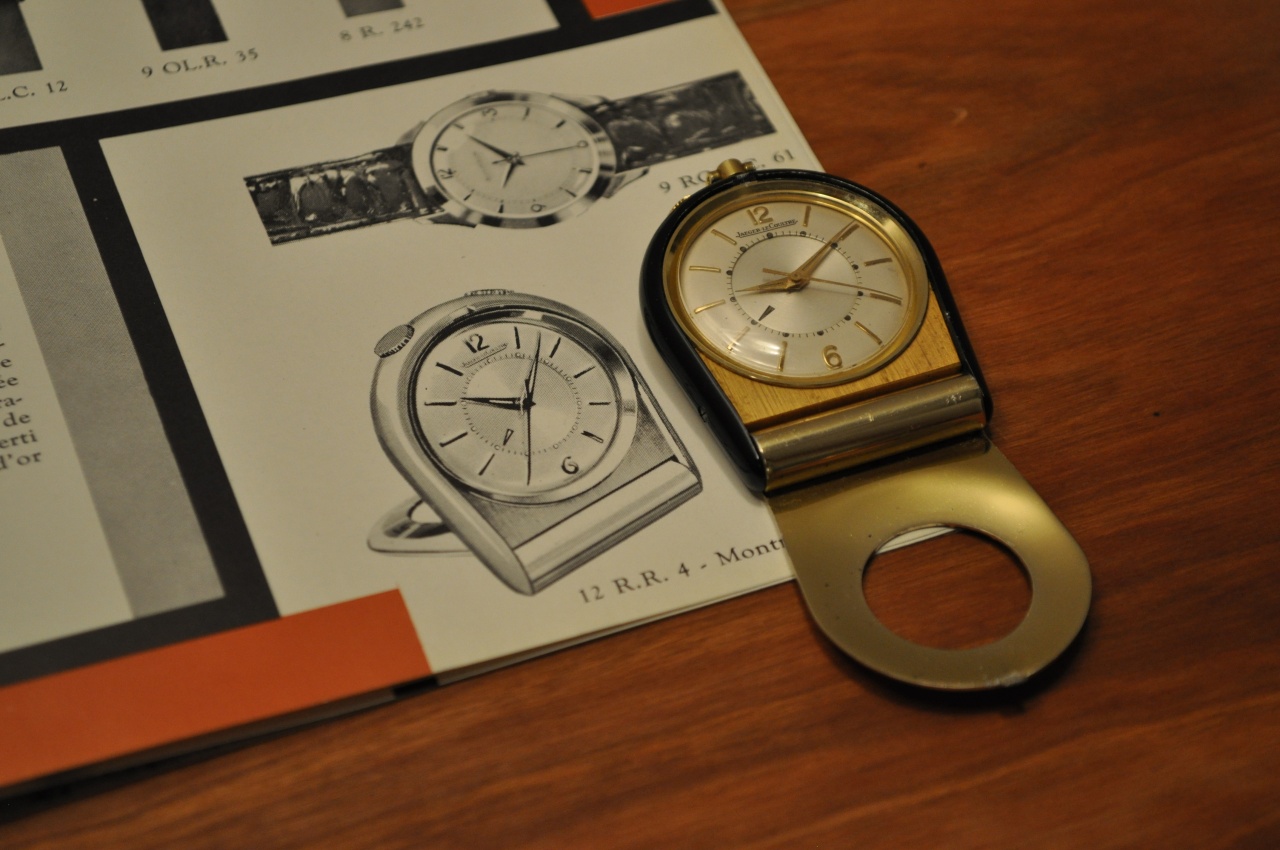 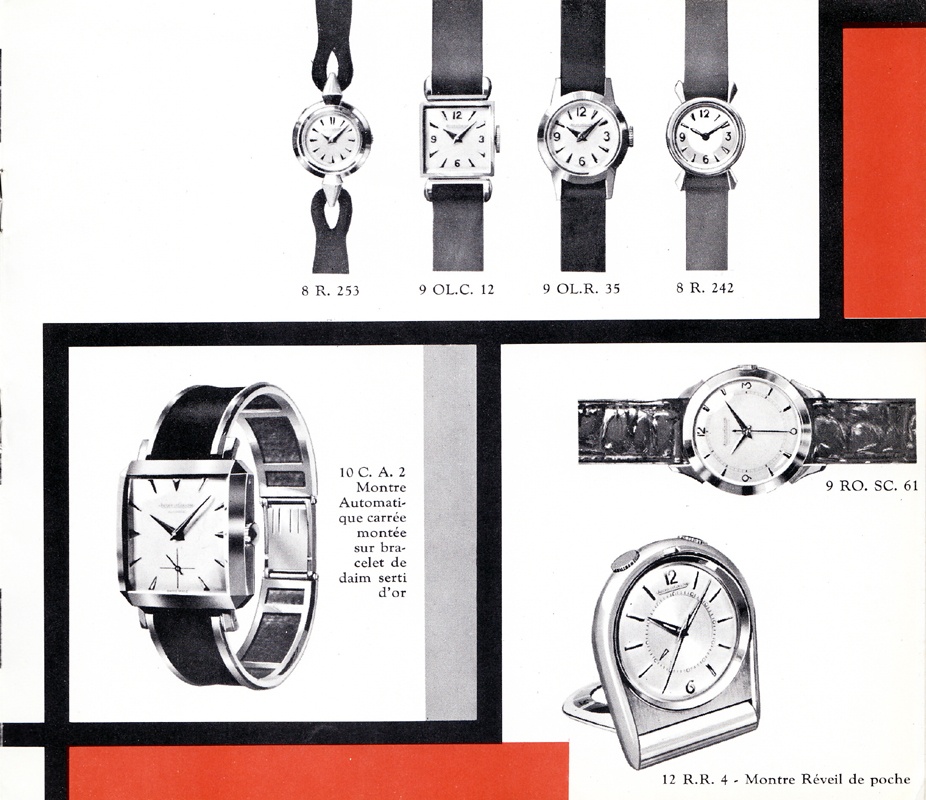 Most of them are made in brass or gilt metal and with leather pouches.

The 11002 uses the leather cover as a foot support. 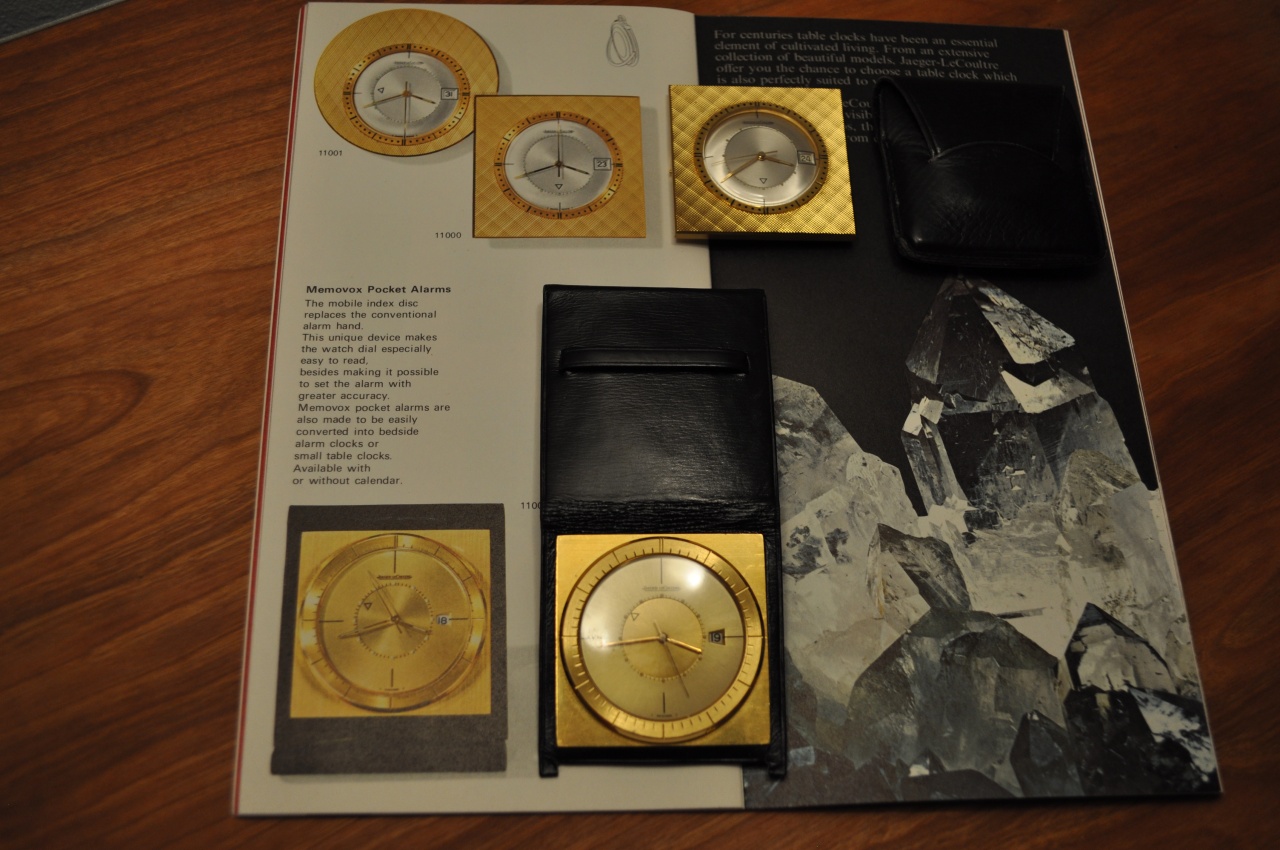 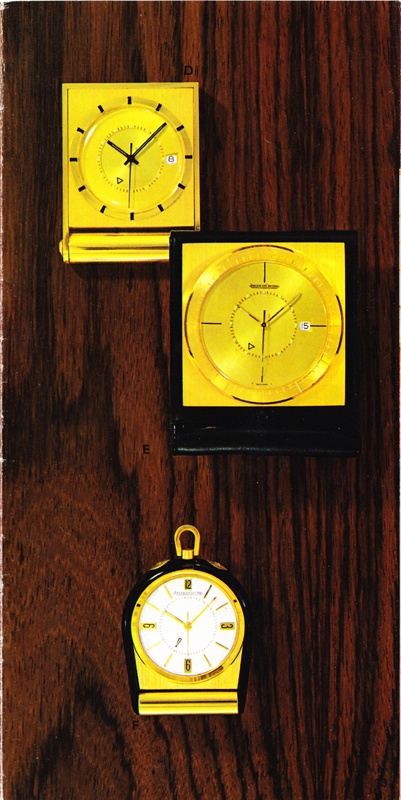 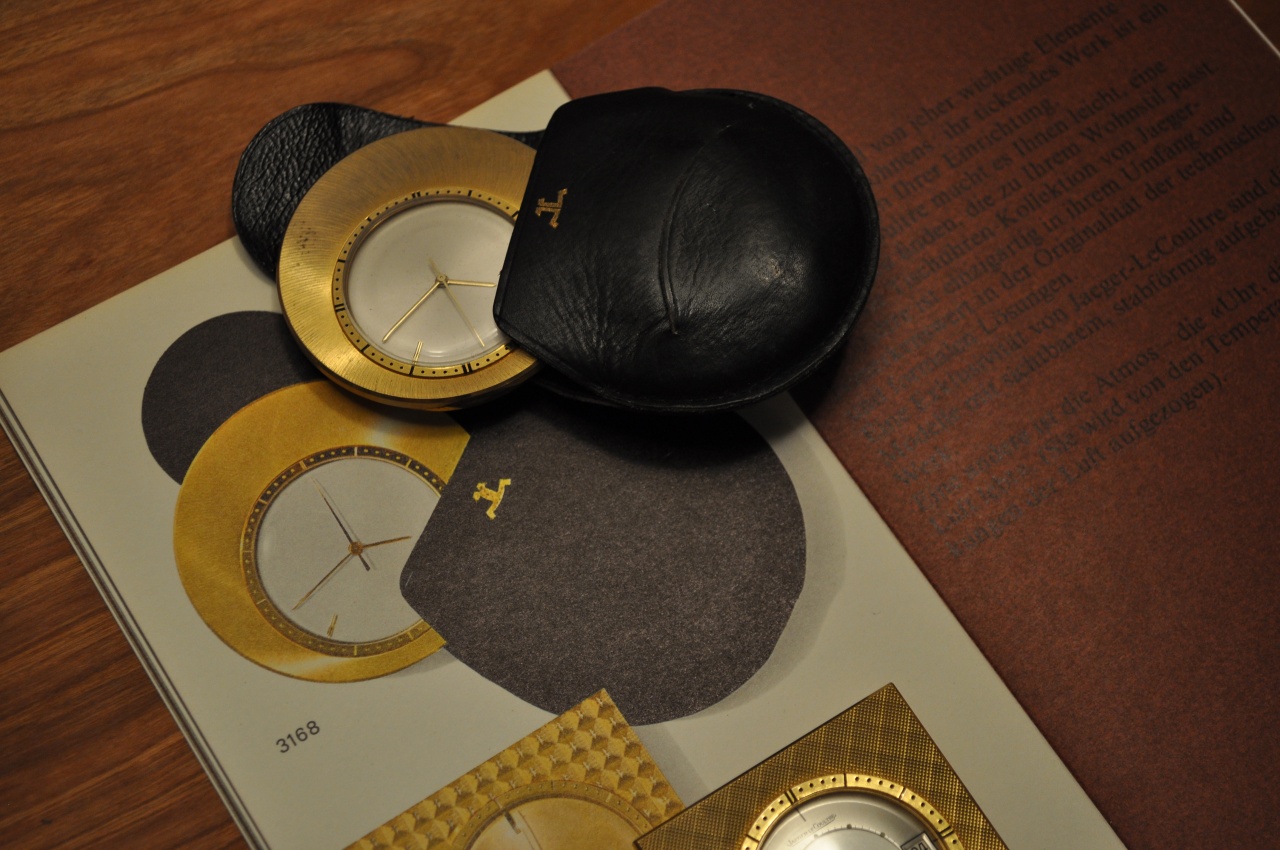 This one stands erect, no folding foot support. 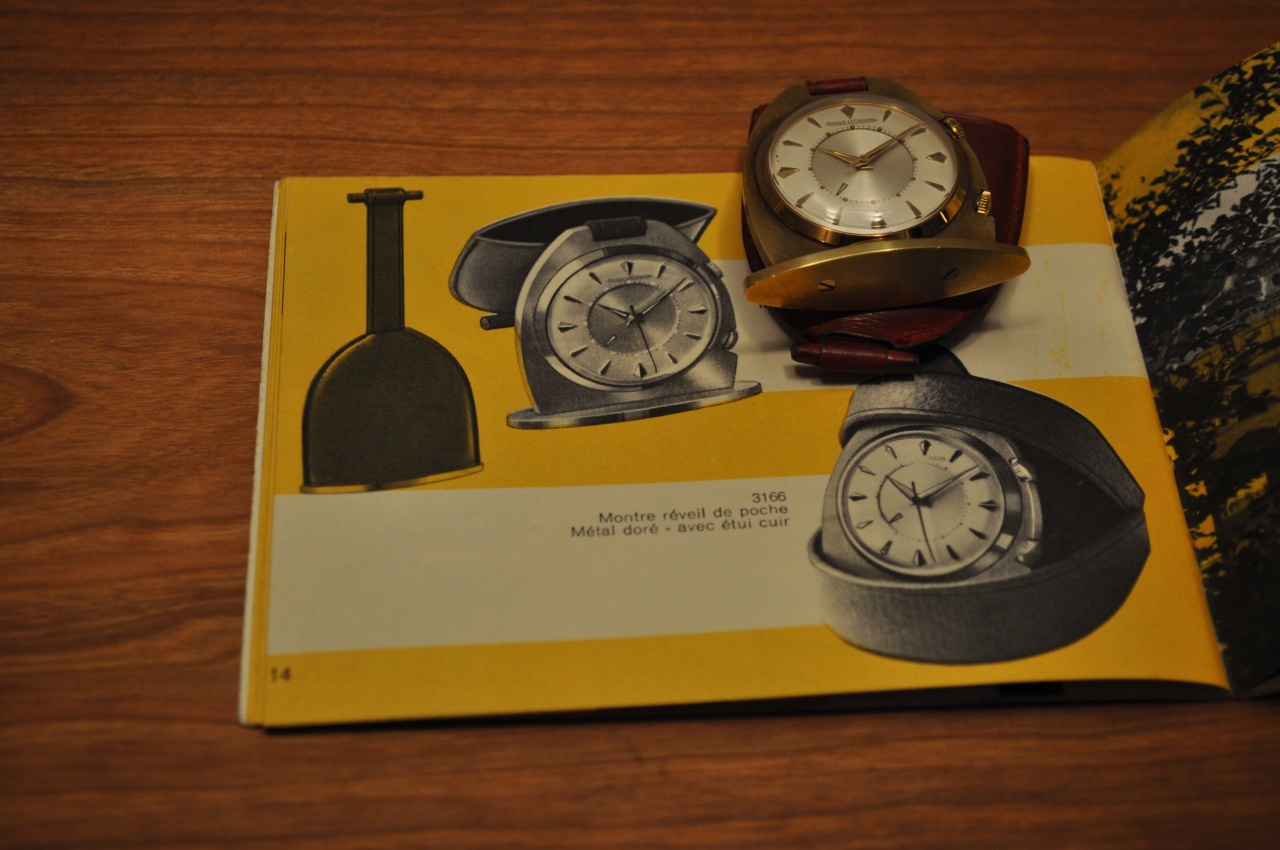 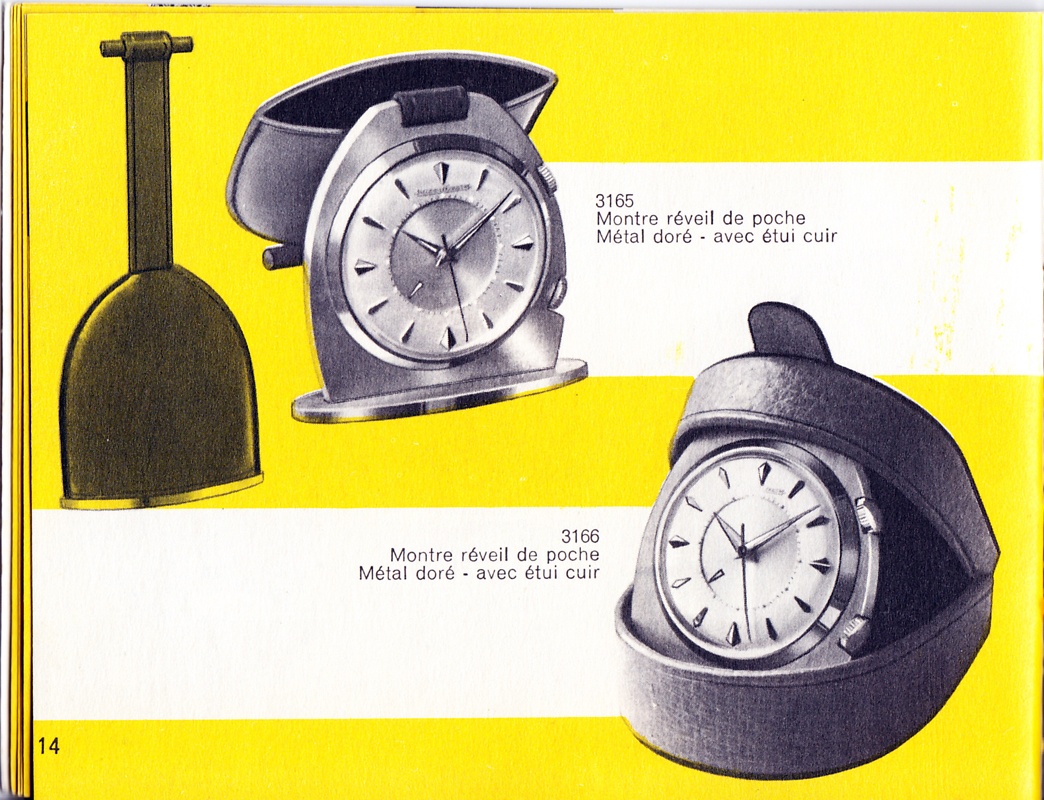 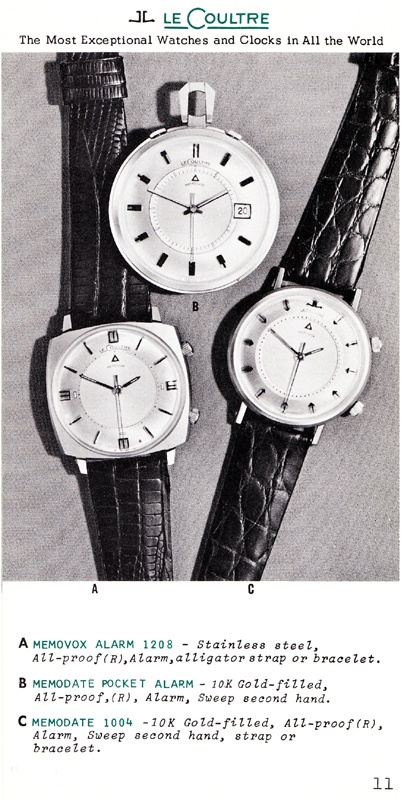 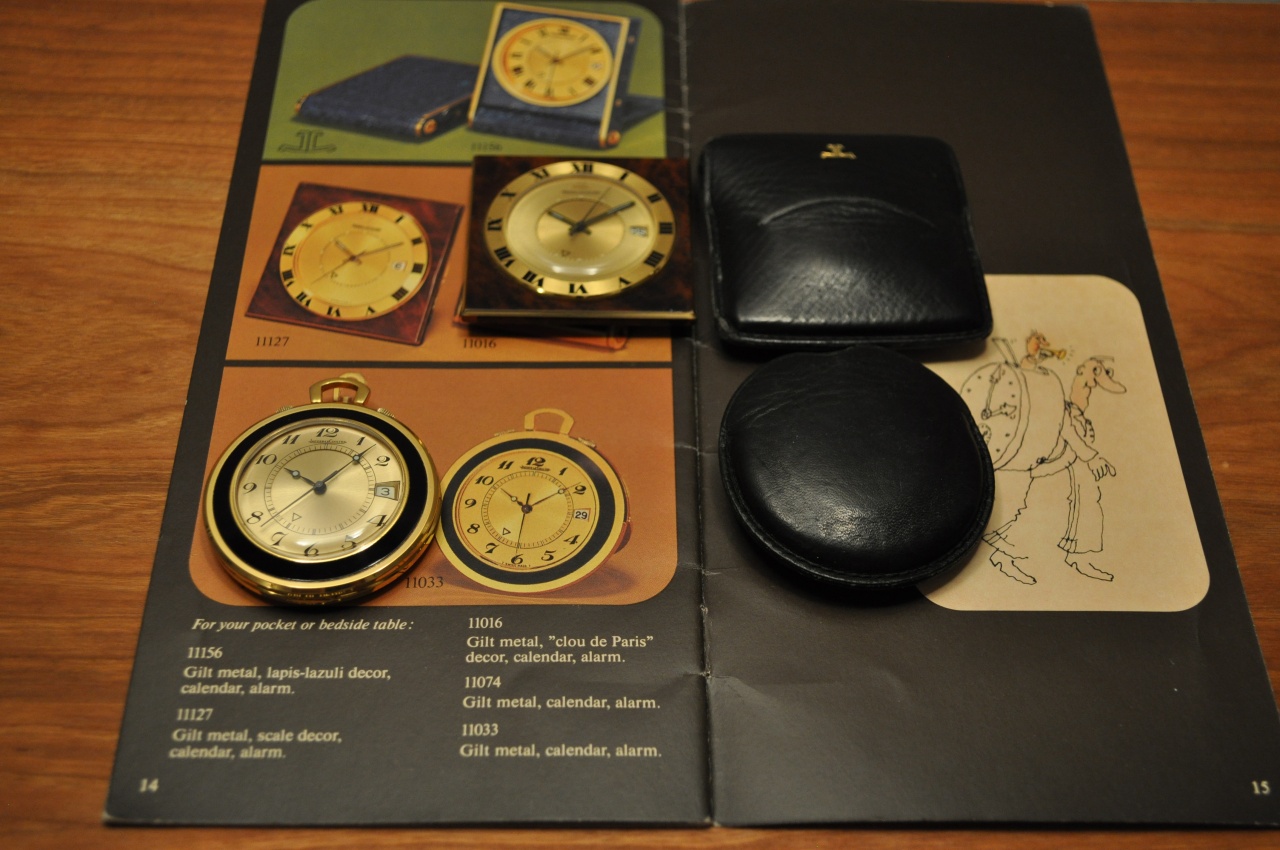 Group photo of my small ladies... 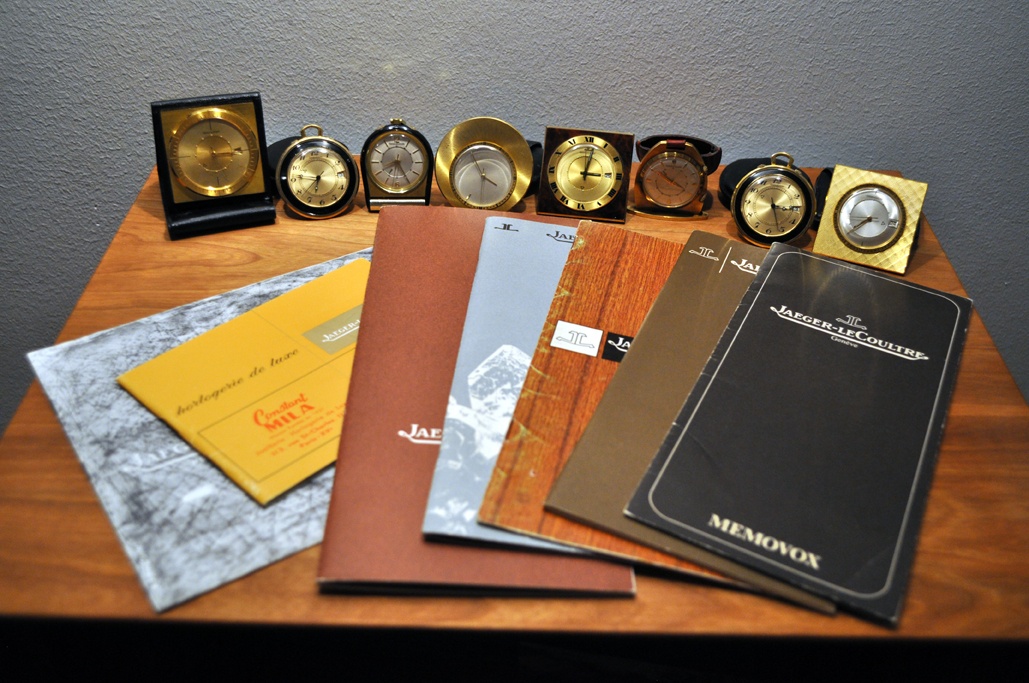 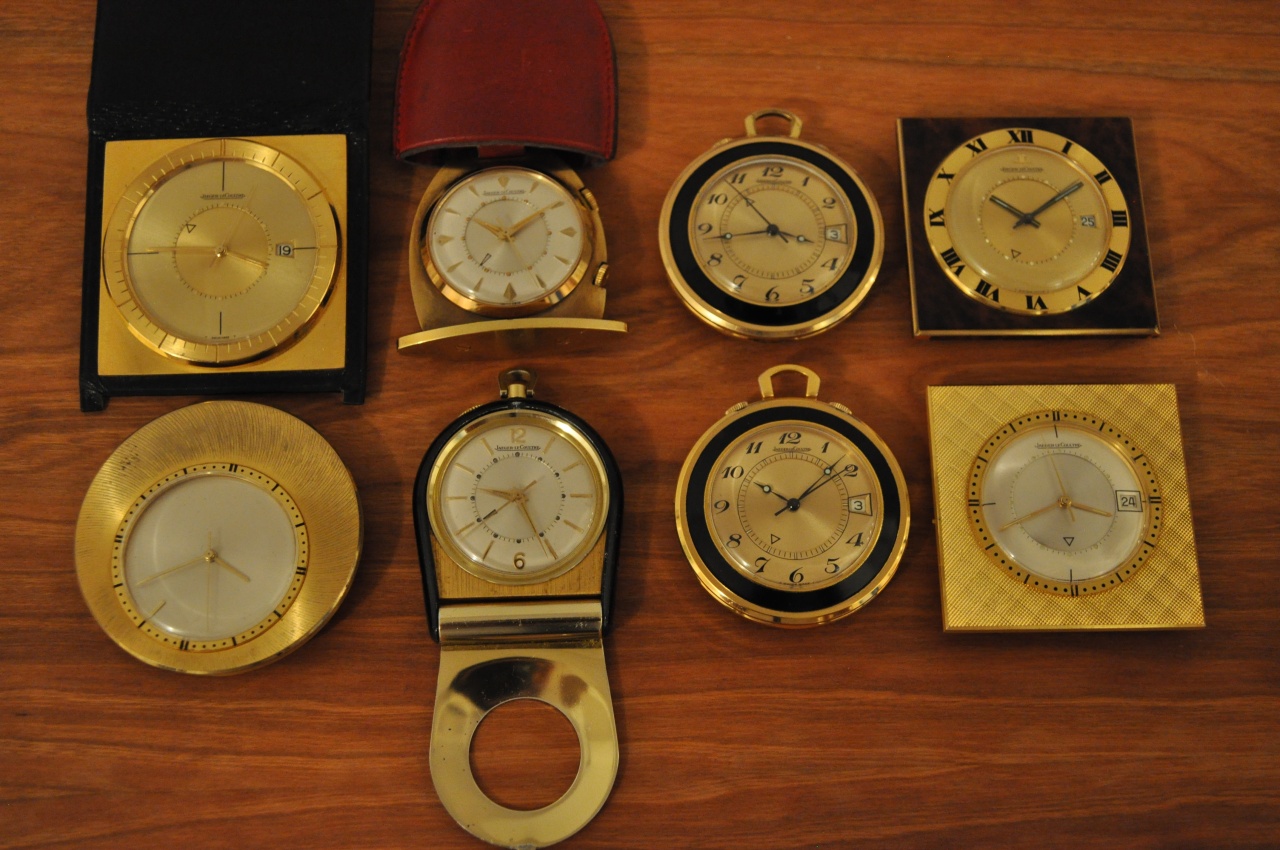 Thank you for reading Part #2 of this Vintage Ads Series.

This is, in my opinion, somethings which misses, in the current JLC catalog.

The versatilty of the product was simply great, as you could use it as an Alarm Table clock or a pcoket watch.

Another thing I discover is in the Mid Sixties Lecoultre catalog, a " square cushion Wristwatch " Memovox, the Ref 1208... My God!

There were some strange products, sometimes!

Thanks for this superb Journey in time, my friend.

It's interesting to see, how this development, and market penetration attempts
of the Memovox principle is pertinent and applied.

What I wondered- two or three 'Watsonian' Q's allowed:

1/ : Was it FIRST in the wristwatch and then brought over ( paradox ?) to the pocket and alarmwatches in JLC ?
- I forgot, no better do not know: when was the fiirst Memovox in JLC, when the first alarm watch ?
( sorry if that asks too much ..)

2/ Almost never we see stainless steel - just an appeal question ? - Maybe because the alarm watches were almost
like furniture, or bring alongs ? - on the other hand, nice efforts for the etuis for all those,
- something which I wish would be revived again for the boxes nowadays - a bit boring at present, for most..

3/ its interesting, to see ads, where the manufacture rationalizes about the image of the brand,
summarizes the selling pounts -- ( "What the public thinks about ..")
- the ads at that time - I more and more realize - were much more 'personalized' or in some instances, even
artistic with drawings, short lines and quotes,
- when I look at the lovely series of the ad Reference posts in the Forum, so much philosophy there,
'raison d'être' and genese, Nice..

Paradise lost or just change of tides and change of times ?
You again contributed to have some Paradise - well, regained ..
( ref Milton)

With that , and many thanks for your Series-2 with such an educatively pleasant share,
I wish you a good Sunday,

It seems that the first Alarm Wristwatch was a Vulcain, in 1946 if I remember correctly the date, and that JLC came 4 years after, in 1950 with the Ref 3150 and its characteristic tubular lugs.

Thnx, anyway for sure
- hs
login to reply

And I think you are on the right track, to start with the wrist Memos…

Further down the road maybe pick up one or two.

Or in my case try to snatch everything that has an alarm, LOL!

As Nicolas explained, first came the wrist Memo and then came the pocket.

The Mother of them all looked something like this: 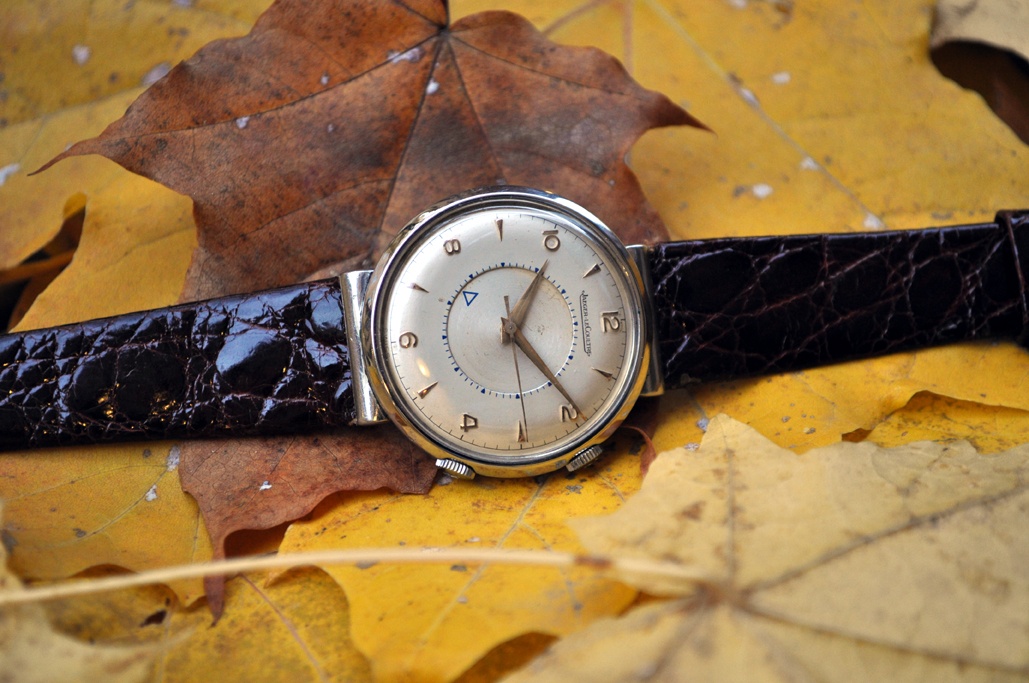 Thank you, HS – hope to bring some documents to Paris for you to see in person.

Hmm.. The tubular lugs, a peculiar appearance in a way, but
apparently significant for its historical importance..

Yes, I would love to see JLC make a modern version of the MPA.

There is still a lot of info missing on this topic, but hopefully one day we will know the whole story.

Or the history of the LeCoultre…

There is so much info to process and put together, I think the designers for the US had more “loose” guidelines then in Europe. 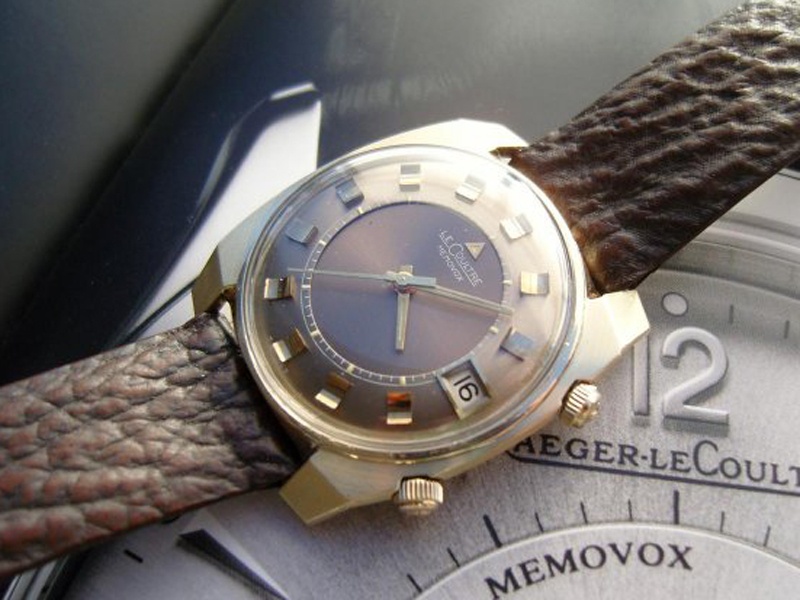 My friend, one or two of these MPA’s would not hurt your stunning collection!

Thank you for your kind words and the reference post honour, Nicolas!

In the Vintage JLC knowledge...

There are so many watches I don't know at all, like the one you just posted above.

The loss of the LeCoultre archives doesn't help, indeed.

As for your referenced posts, they are worth the honours!

That’s why I am trying to build my own archive…

Wait until I come to the LeCoultre Memovox post…

I have a surprise for you!

I already spilled some of my secrets for you!

Did they produce completely independent ? - No records ?
Just lost, or lack of systematics ? - question, questions .

Now, I start to even more understand your fascination, extending to the US production,
Very educative, uncharted territory for me, somehow..

But one thing is for sure – that the LeCoultre part was a joint venture in different constellations’: Longines, Wittnauer, Vacheron Constantin…

+ the fact that the company has changed owners since then…

One day I hope to have enough info to be able to write a post on the topic.

It will be very difficult ..
-- not to match facts with fiction ..
[quote by Holmes to Watson]

Wise man, this Mr Holmes,
- but most of the time, he finds out.

I even contacted the Longines Heritage Dept to ask them if they kept some interesting Lecoultre Docts about this era, and they told me they had nothing...

It would have been interesting to see!

Thanks for sharing, stupendous work as usual.

I will be on the lookout for MPA's from now on.

But, what fun would it be with an empty wish list?

Happy you enjoyed it!

Documents like this highlight my love for these mechanical marvels even more!

HS, I am very happy you like this series - now I will have to go back to my black book and choose a topic for Part #3…

So many different topics to cover.