First in this series is the Futurematic! 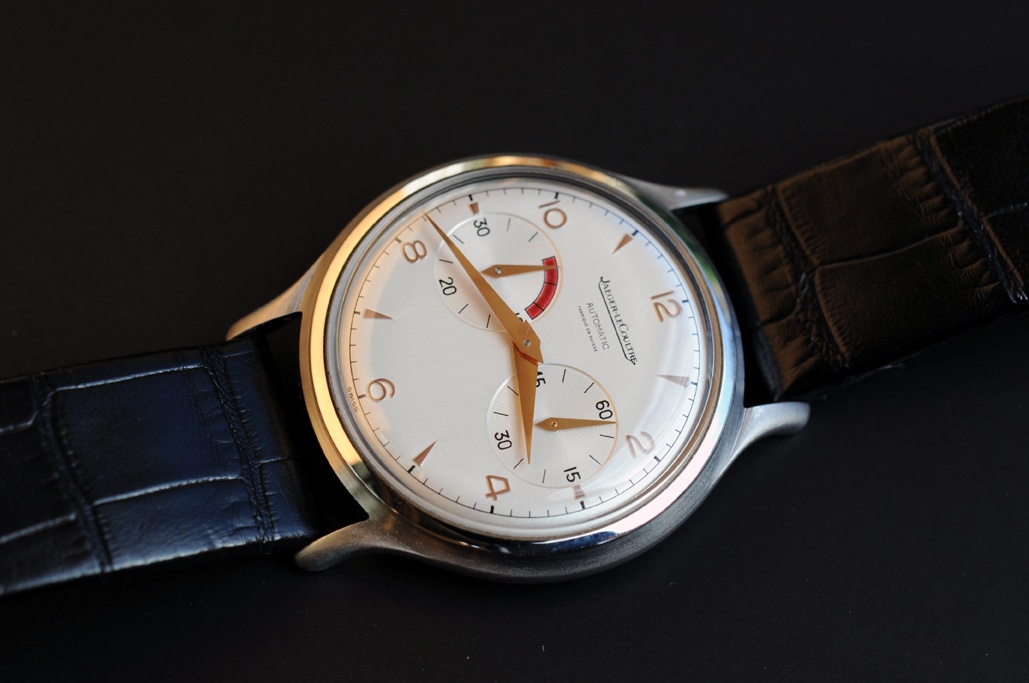 According to some sources the Futurematic was introduced in the US 1952 and in Europe 1953 and was produced until 1958.

What confuses me about these facts is that I found a repair manual printed in 1951. 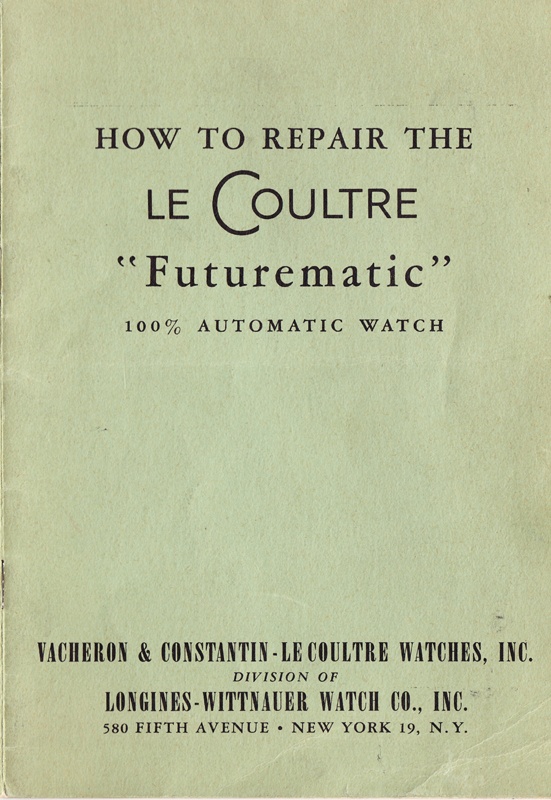 Was JLC so farsighted that they printed the repair manual one year before they launched the watch? 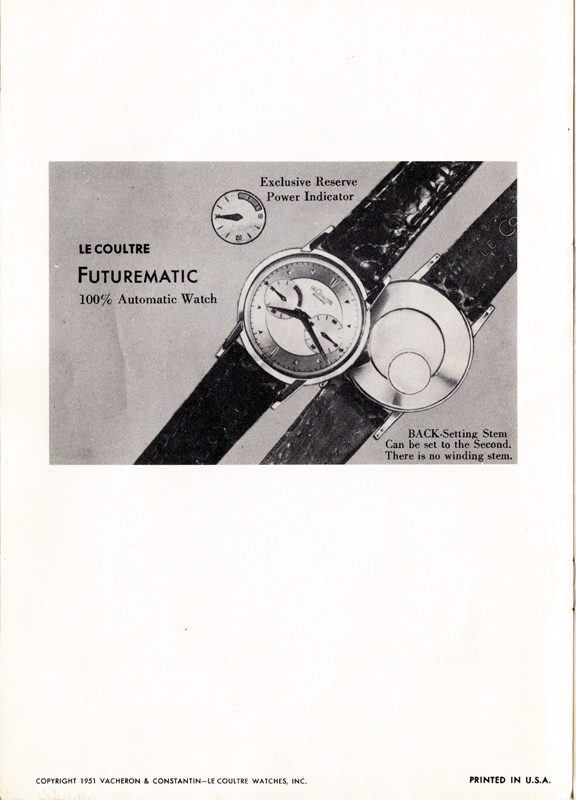 This manual I have also seen printed in 1952. 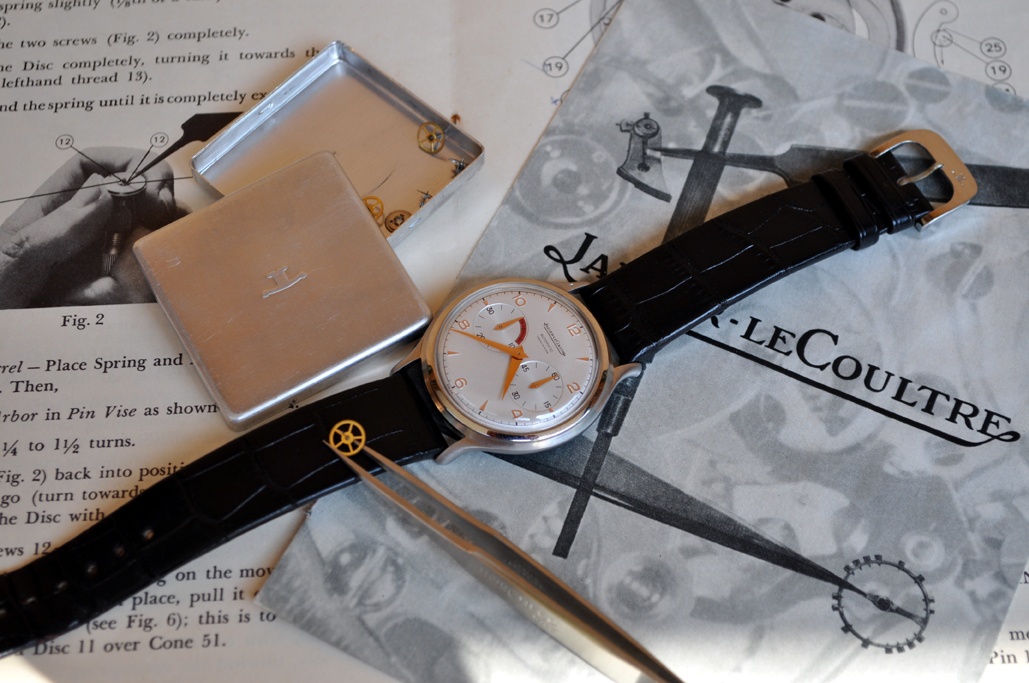 Also the most recent document about the Futurematic I have seen so far is from 1957.

Is this because JLC already decided to discontinue the Futurematic? 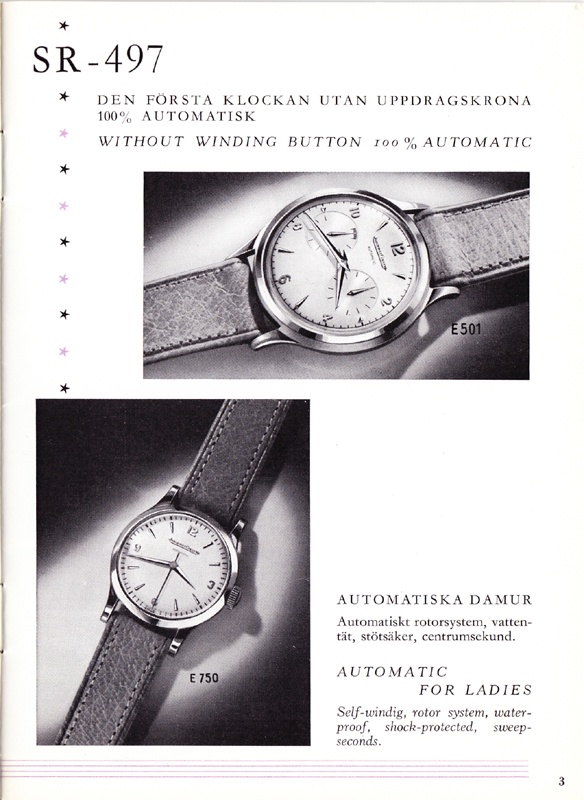 The “Slide – do not lift” came in many different versions. 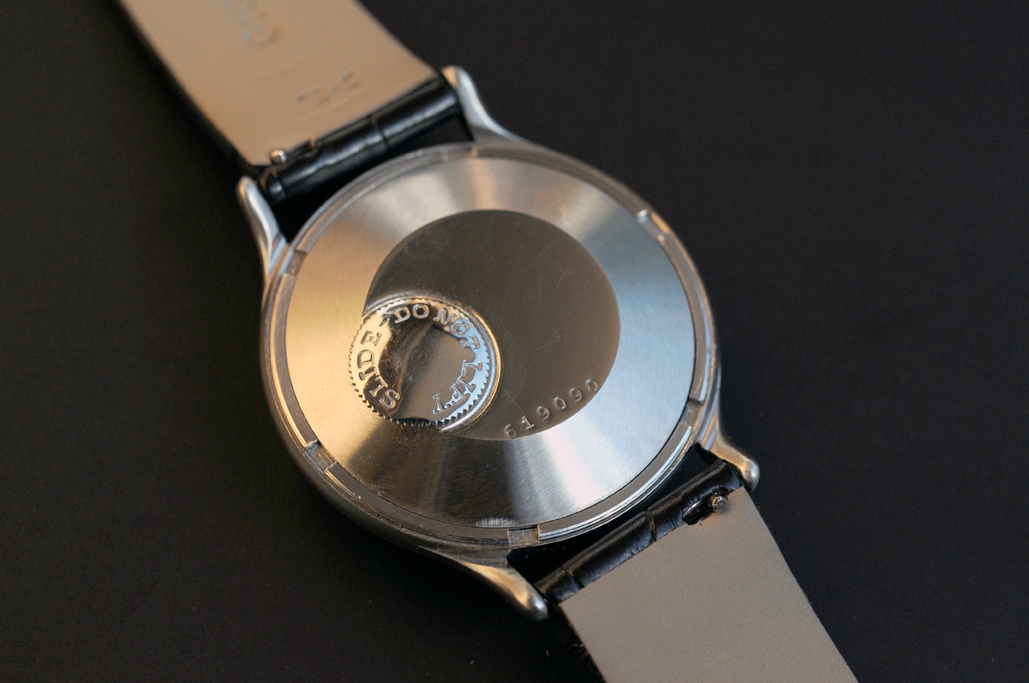 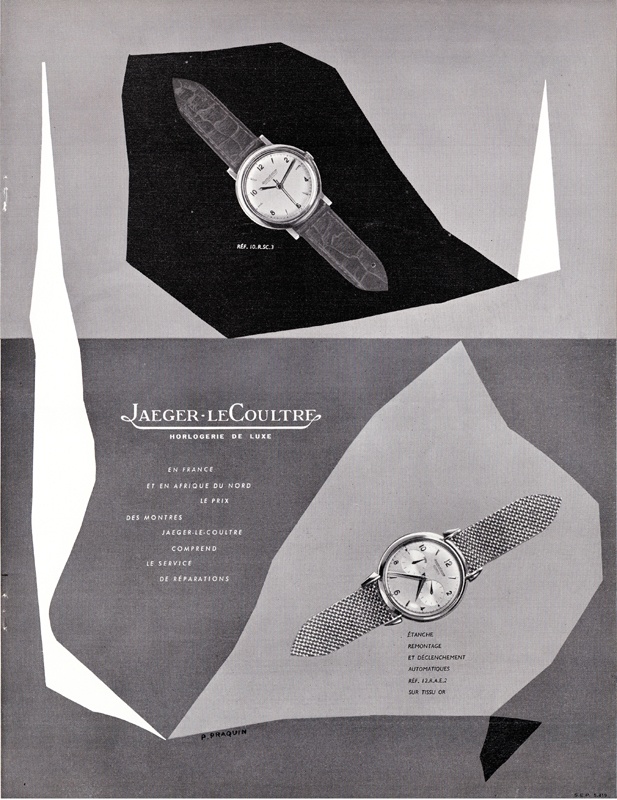 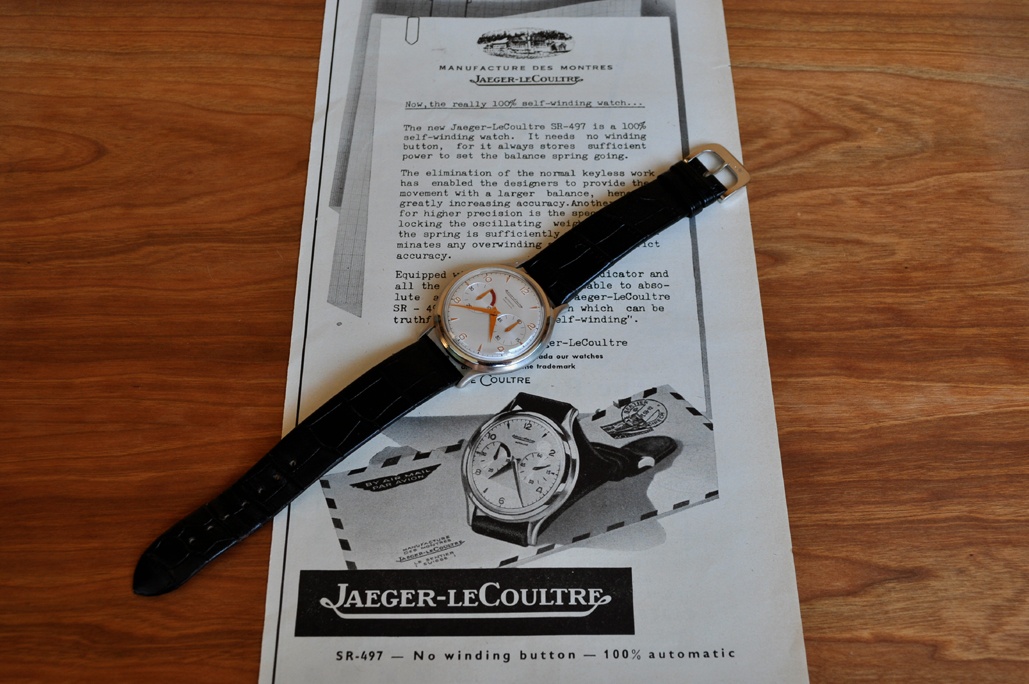 Interesting here is that the first line of text is in French, while the ad is in English and clearly suited both for the European and the Northern American market.

Another interesting point is the line: “The new Jaeger-LeCoultre SR-479…” as it was shown in the French catalogue the year before. 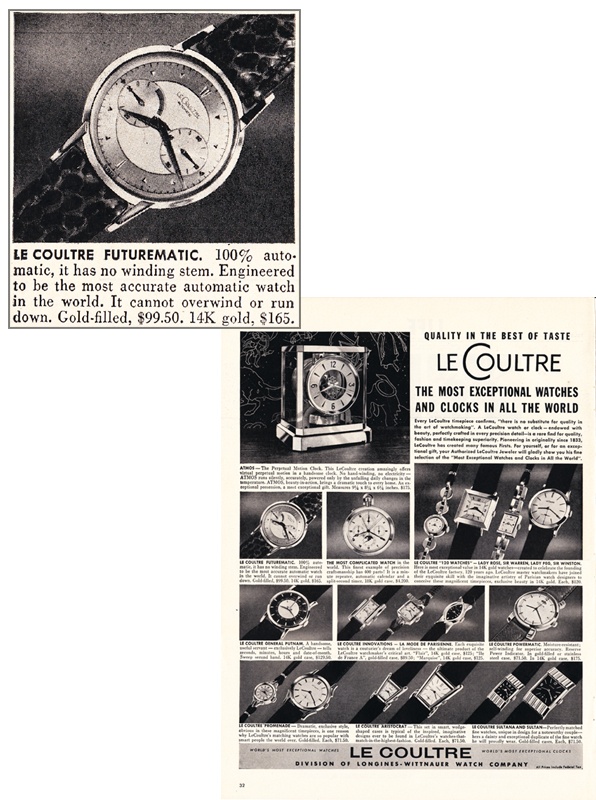 One watch with a lot of diversity. 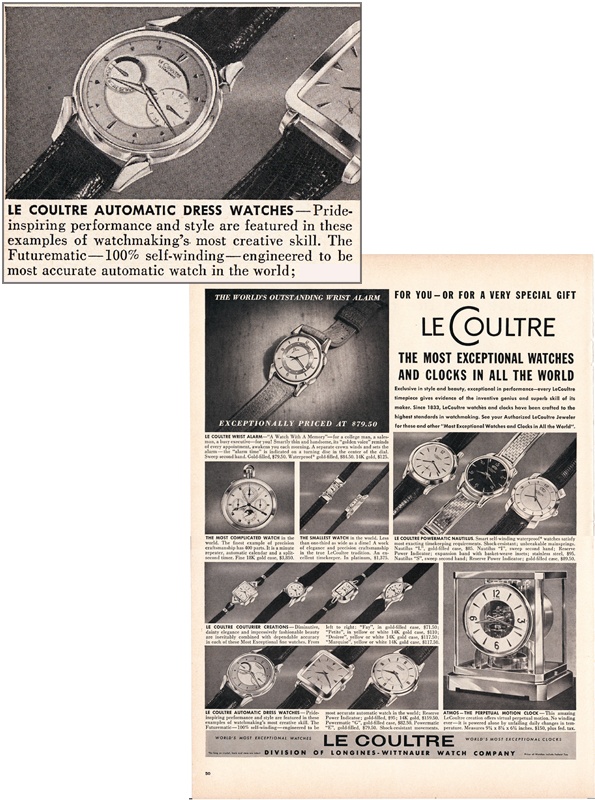 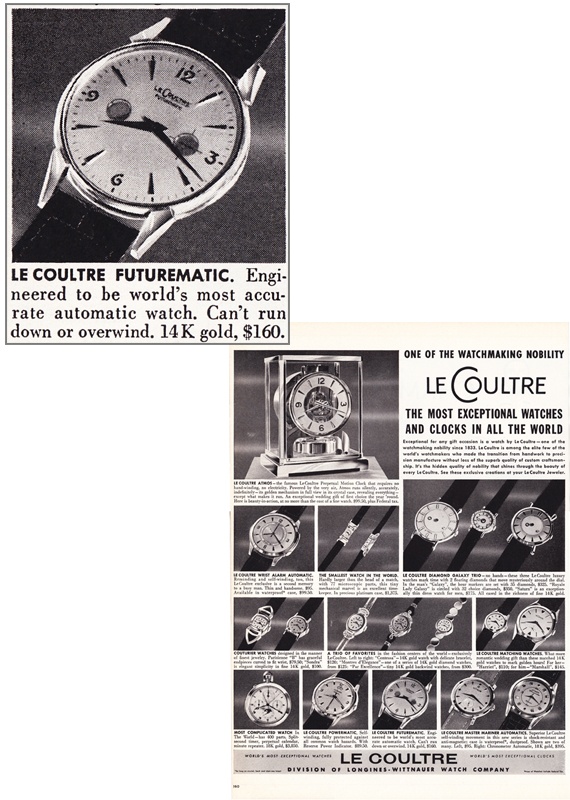 Different dials: the two main groups “normal” and “Port Hole”. How many different variations within these two groups I fear that no one really knows! 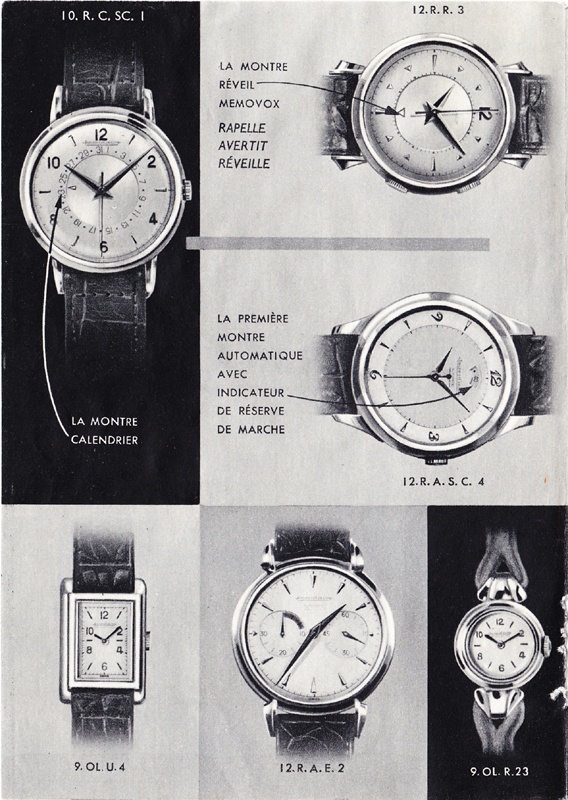 About the French references.

According to Google translation (but I hope Nicolas or other French spoken may provide us with better translations): 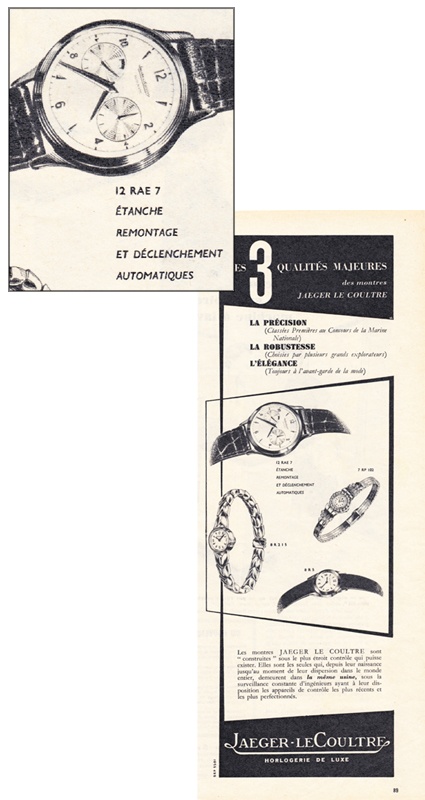 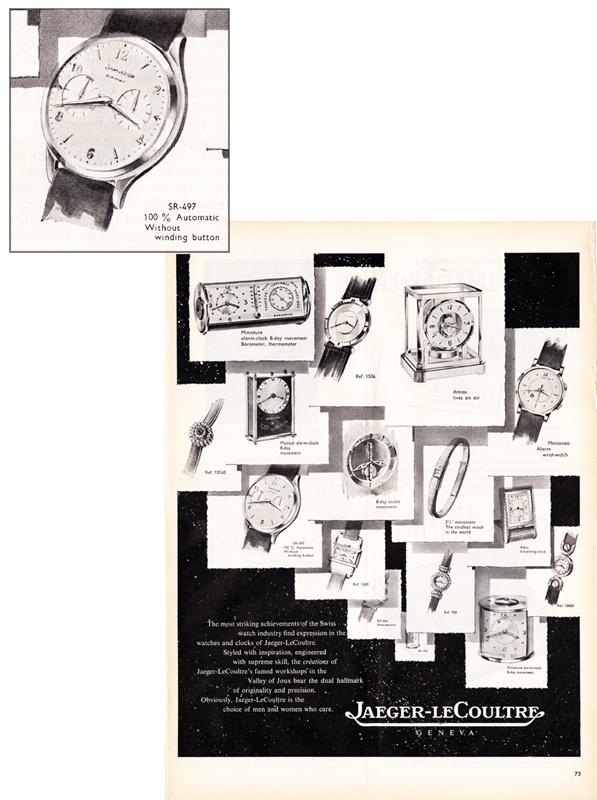 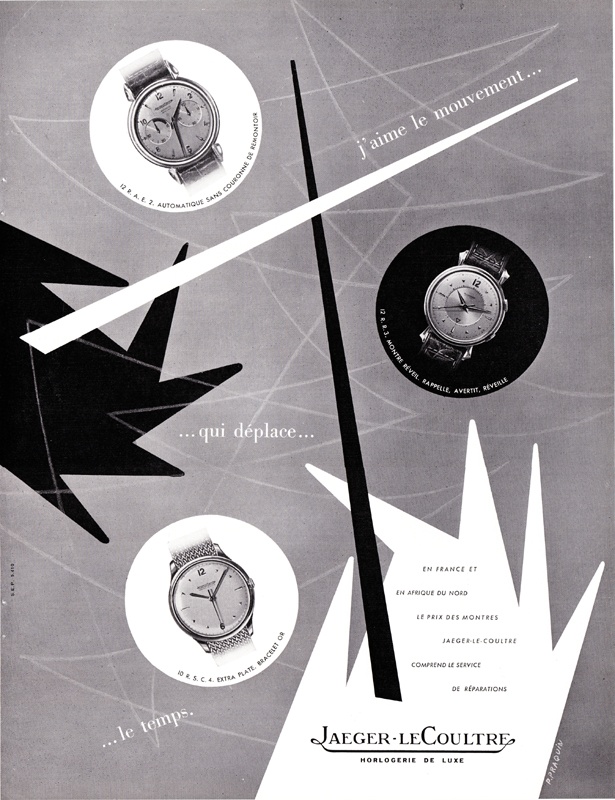 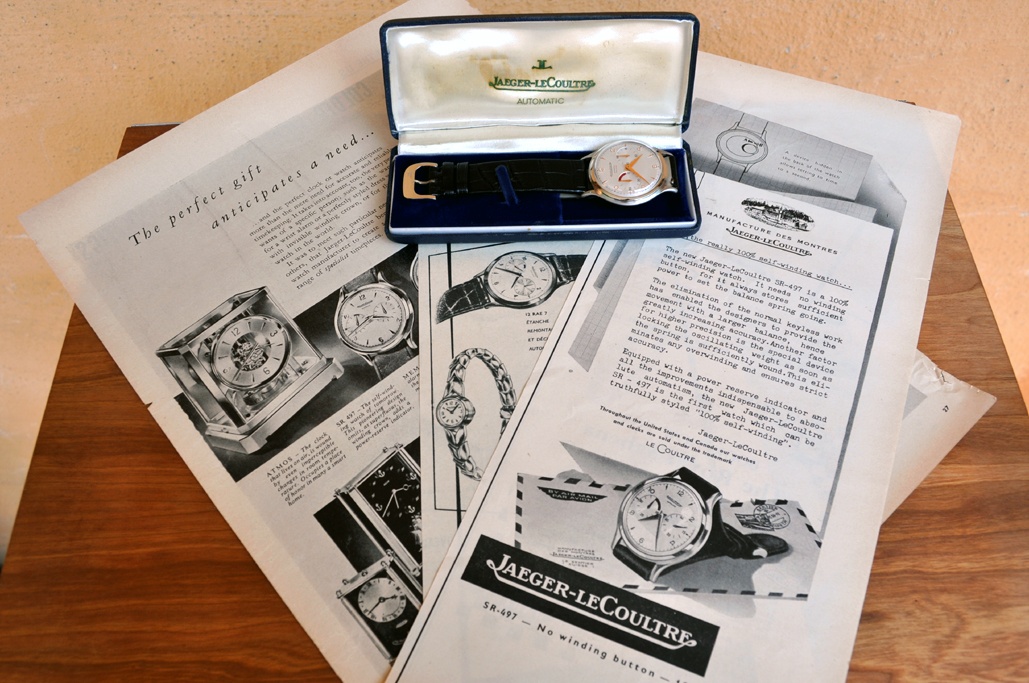 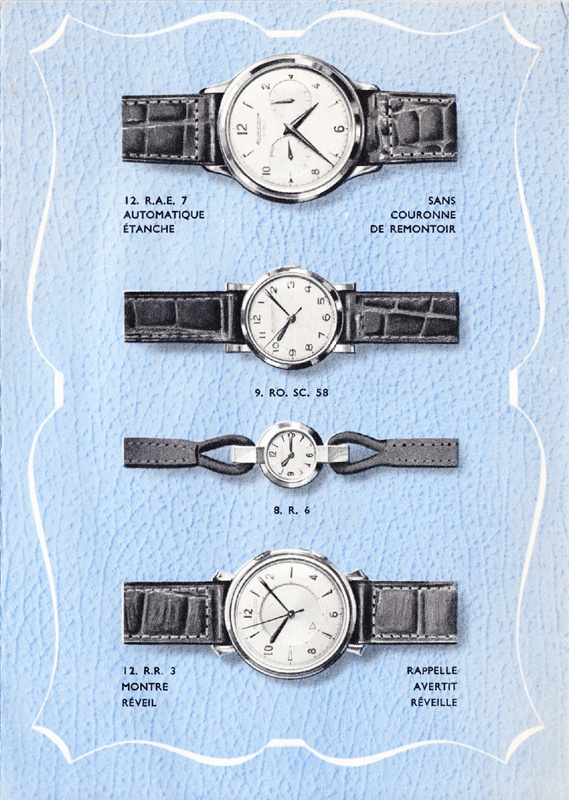 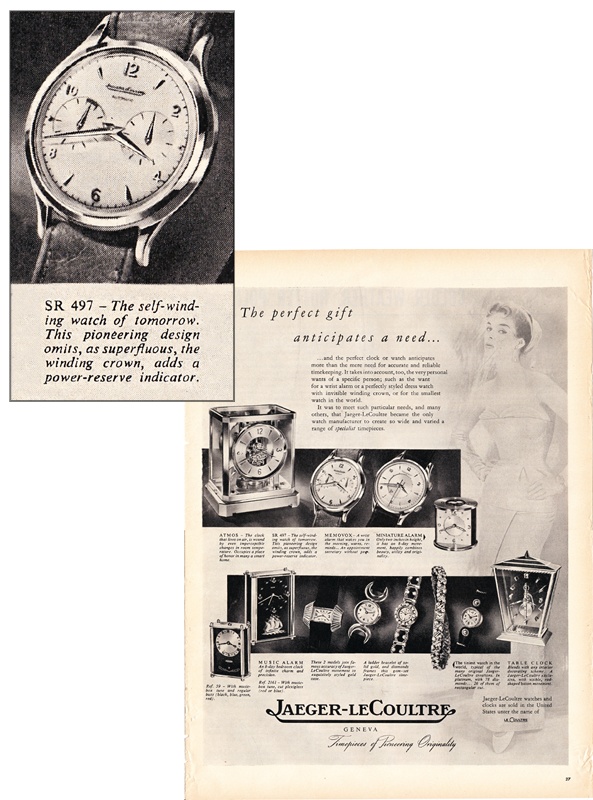 At some point JLC decided to give the Futurematic their own “logo”. 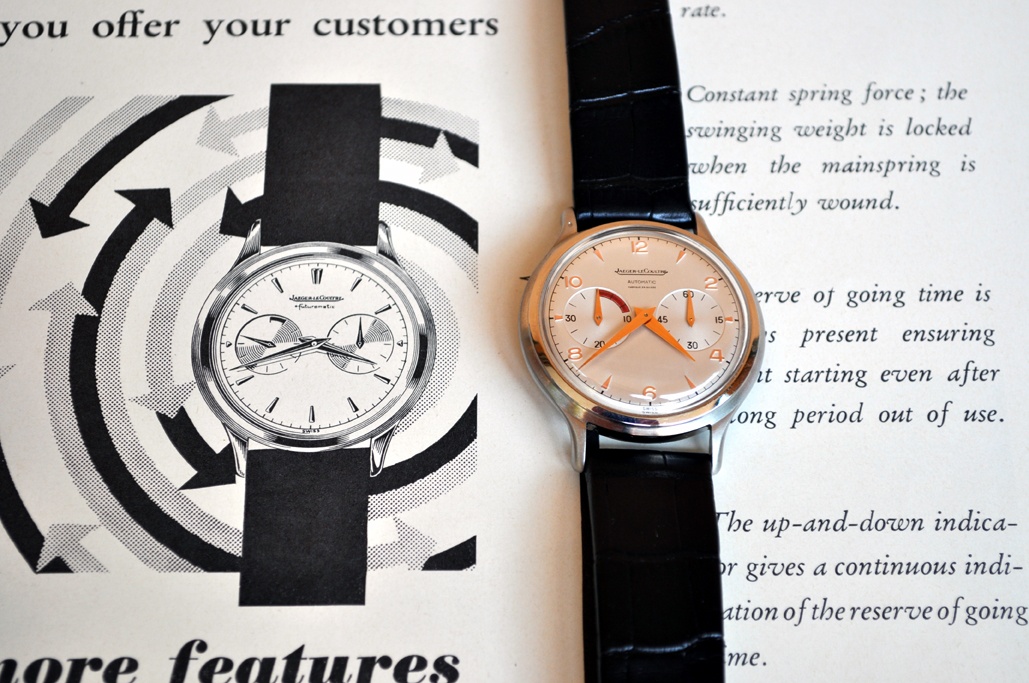 And a lot of sales argument. 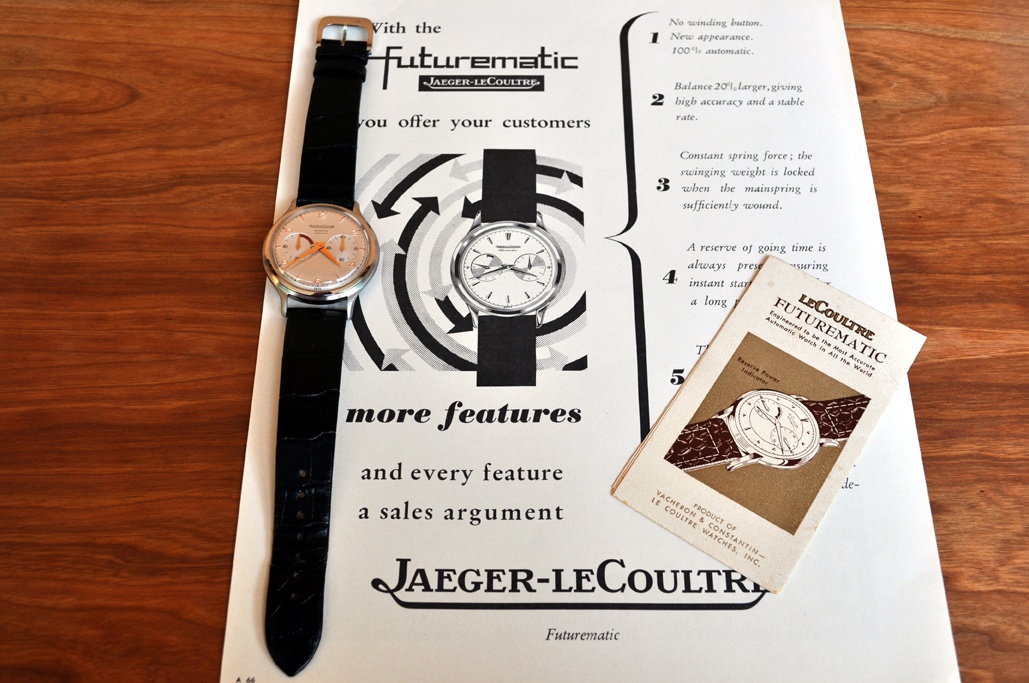 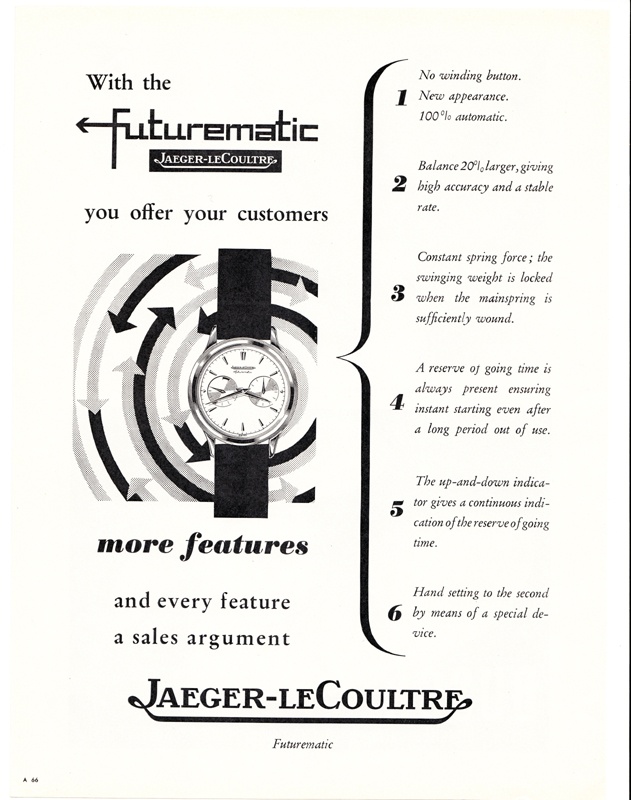 Actually I have seen several different styles on the Futurematic font. 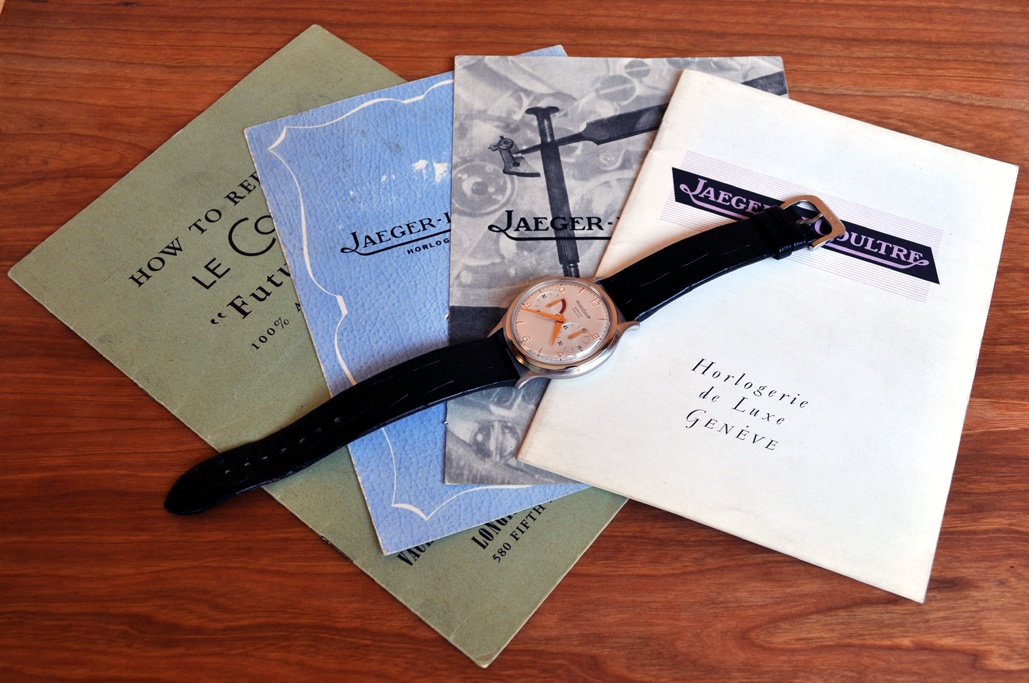 In the beginning “Automatic” or “Automatic/Fabriqué en Suisse” was written on the dial.

But best of all concerning the Futurematic – it’s so loveable on the wrist! 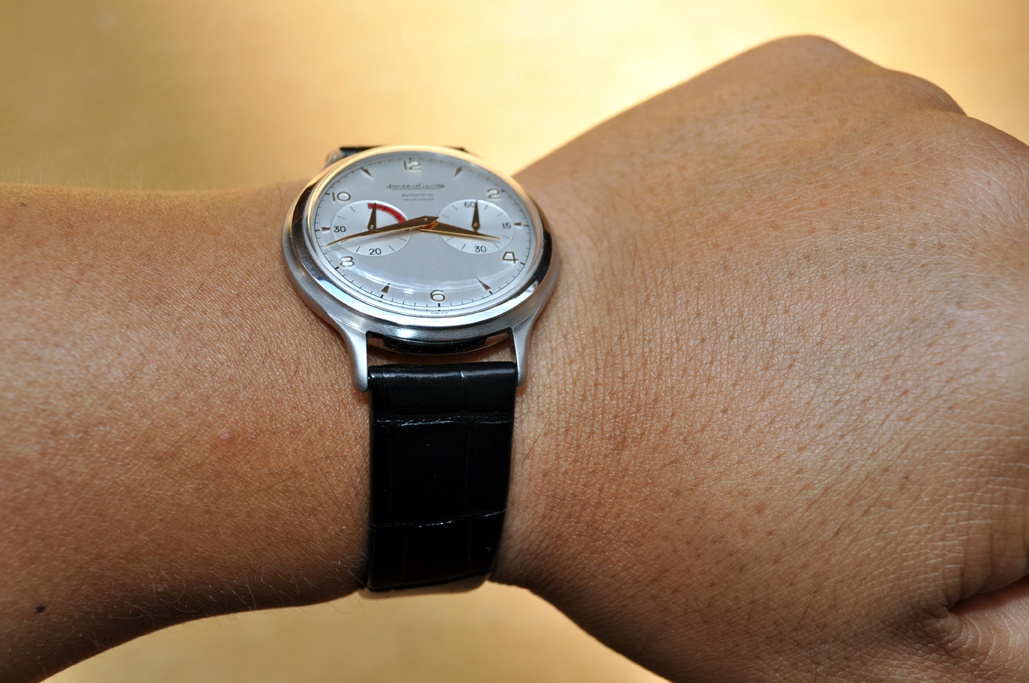 Thank you for reading Part #1 of this Vintage Ads Series.

That is one serious post. I loved it and the Futurematic.

I hope JLC does a TT Futurematic.

Thought it was time for some thing with more substance!

Thank you, George – I really hope that JLC is considering a TT Futurematic!

Always nice to have a look in to the history!

I am happily amaze.

Are you on a hunt for one these? 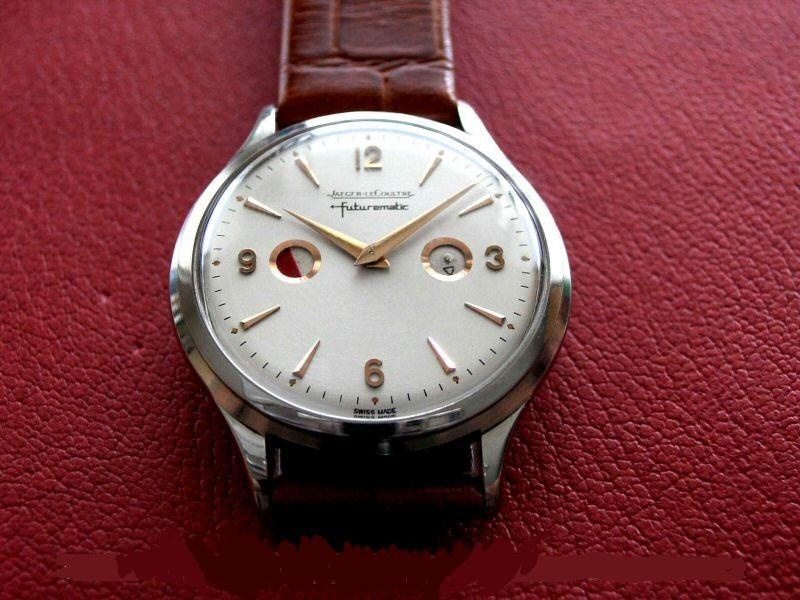 thanks, Tyler for this kind share, in addition to Blomman's great 2 subdial one (RM and second)

Enjoyable, both of you !

Sooner or later, yes – I can see a Port Hole in my future..!

Thank you for your kind words, T Bomb!

Thanks a lot, Blomman, for spending all this time to post such extensive piece of information. Very useful indeed.

To write about a watch is a great and fun way to learn!

Allow me to say in Portuguese: Que maravilha!

I just wait to be amazed when you land on the Memo ads.

The Memovox will be even more complicated…

I think I have around 50 different ads and catalogue-pages only covering Memovox!

By: hs111 : June 15th, 2011-04:09
Hello, my friend,
- THAT was putting the benchmark for the rest of your series high again - what a pleasure read !
So nice, to again see the representation of this wonderful "concept watch" - a watch almost too good for its time,
- or as it seems too good to be brought over into modern times.
I'll also remember Nicolas' great post aboput it, and the portholes, I absolutely adore !

For sure the Futurematic is a piece , that I admire and like very much - and truly feels great !
( Finally saw some beautiful ones recently, but not yet for me at present).

And again, as so many times in other posts with old documents .. some nifty puzzles there, apparently ..
Holmes again on the rise ? - Can't do without those - ehh ?

Further to that little thing: just a kind and humble little notion, as you were referencing and asking
some of the code explanations/ translations:
- Thus just in relation to the reference code , you again were interpreting,
similiar to a previous post thread about the Jubile CODE ( also with a number of hints and explanations from Nico - remember ?):
- was from first week of may, if I remember correctly:

1/ we were under the impression it's a system for the french market, and the letters may have double meanings, ie, also the
position (!) plays a role
2/ the letters describe Form, Function and Features, mostly in that sequence
3/ what the number in the beginning stands for, was not completely clear ( Nicolas thought , it's in relation to diameter, if I recall)
- a letter in the end - maybe a catalog number or model (?)

so ad Position 1):
eg: an R in position 1 (Form) , for sure meaning Ronde ( Round) and nothing else
- whereas a R in the end ( Feature) meaning Reveil ( Alarm) , which is not not pertinent here for the lovely Futurematic

why? -. well, because a "C" in position 1 pretty sure means Carre ( Square), related to other catalogs we saw..
( sorry - can't find the correct accented "e" on my keyboard..)

I'll stop here, as this Jubilee Code is not really THAT important for your great post, but as you had brought it up , somehow
interesting to see the links and paths.

It has been a pleasure to read this great first start of your (holiday) Vintage ad series,
and as so many times, the thoughts and twists connected with it

Well, we will see how the future parts will become...

Much is depending on time and what kind of material I have.

But hopefully I will be able to highlit some interesting points in each and every one!

I have already a couple of topics in mind…

Thank you for your very kind and encouraging words, my friend!

Holmes on the rise..?

Absolutely – to find another piece of the puzzle, to learn something more is always on the agenda!

Especially watches like the Futurematic that lack a lot of documentation.

About the French references – yes, I think you are right I just tried a different explanation.

I find vintage ads and catalogues are very interesting...

You may find a lot of information in these that helps you a lot when hunting watches!

A stands for Automatic.

E For Etanche ( waterproof, which suggests a screw in case back ).

Back to your watch, you know all the love I have for the Futurematic, a very charismatic and representative watch, IMO.

Your ads and catalogs pics enhance its interest in a dramatic way.

Well, just have to wait Henry Higgins,
other promises.

One of my favourite Vintage JLC, by the way: 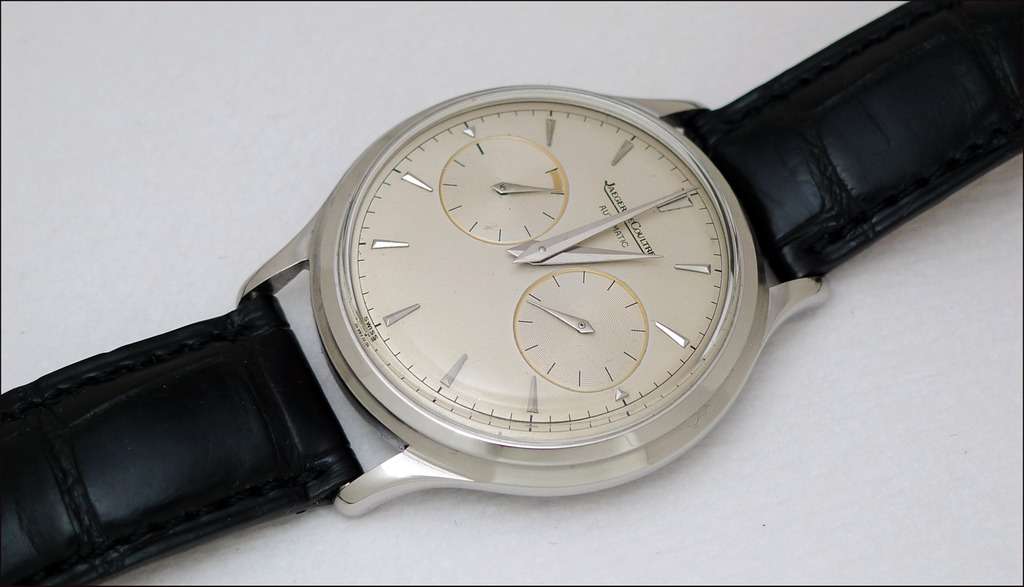 Embargo condition almost, now for a while !

You can't imagine how often I look at this picture, even if I have it in the real...

I muust be completely crazy.