Introducing one of the strangest watches ever produced by Jaeger Lecoultre: The Master Quartz LED, also referred to by JLC as the Master Quartz Digital. It features a quartz movement that displays the time using a light emitting diode (LED) display. 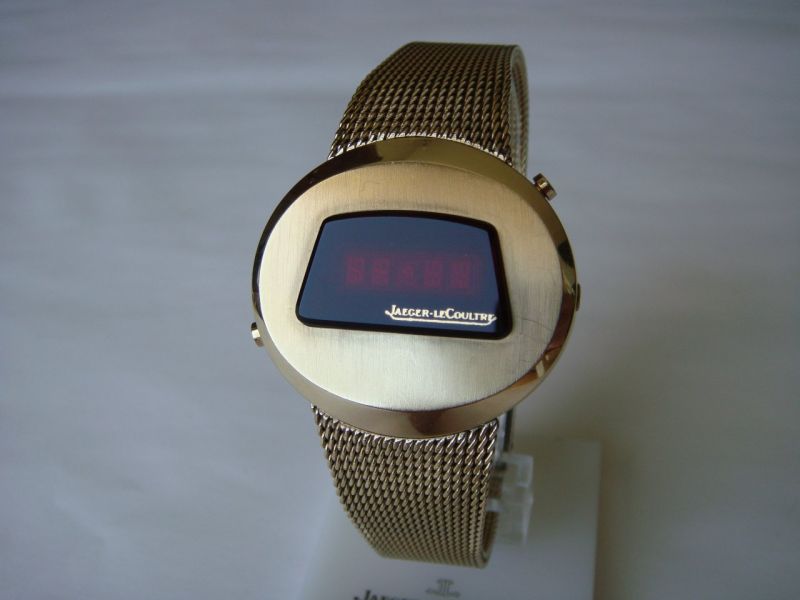 With it’s oval case, integrated mesh bracelet, and trapezoidal crystal it possesses a style that is almost unique, and certainly a product of its’ time. I’m sure someone in the 1970’s thought that the styling was futuristic (note to the past: It isn’t). Even when compared to its’ contemporaries it is oddly styled. The only 1970’s watch I can think of that is even close would be the Patek Philippe Golden Ellipse. At 39mm wide and 35mm high at least the size of the Master Quartz LED is somewhat modern. 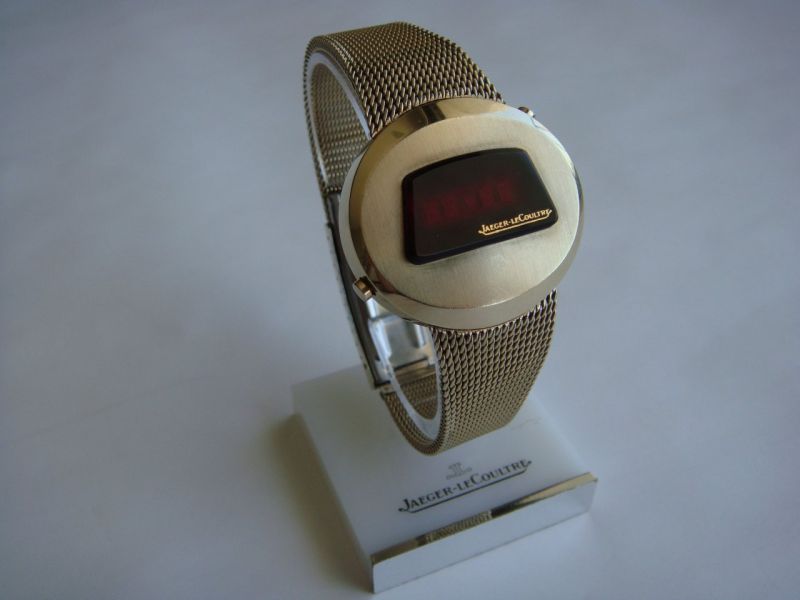 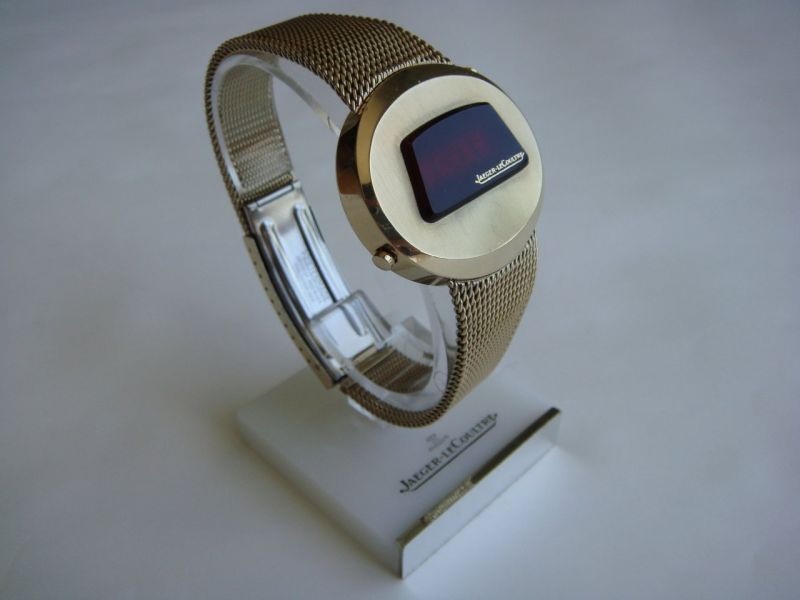 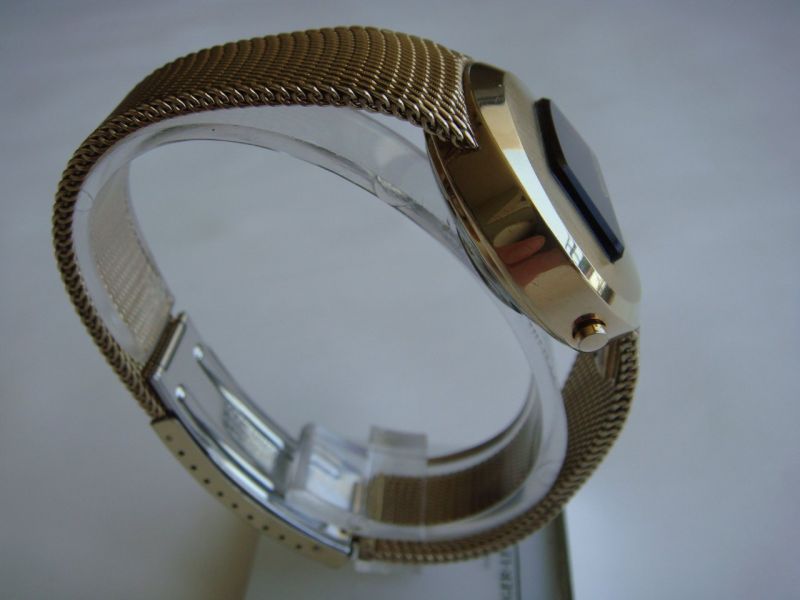 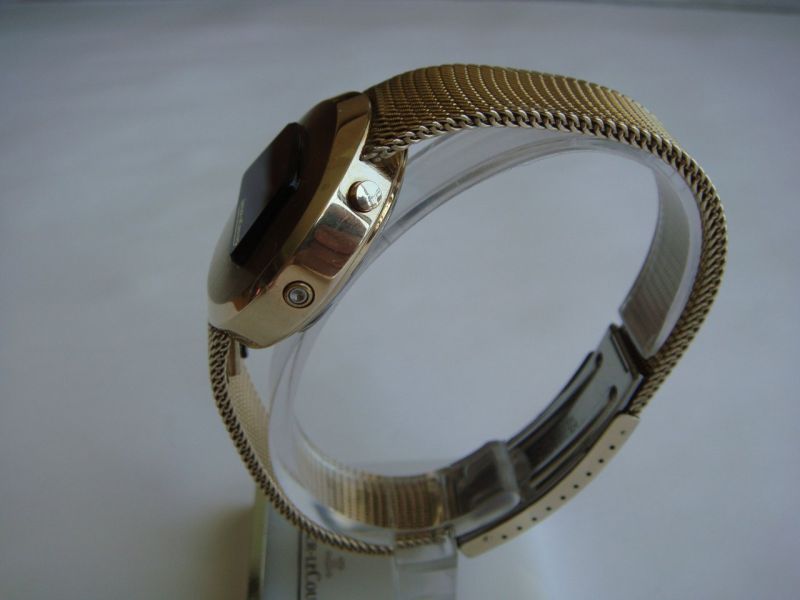 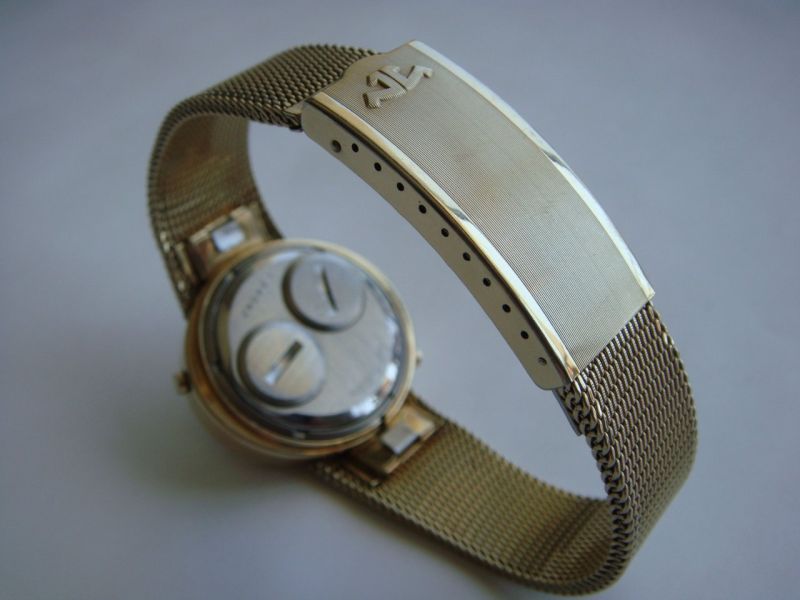 The Master LED features two action buttons and a recessed pusher. The button at 2:00 activates the time display and if it is held down the display switches to a seconds count. 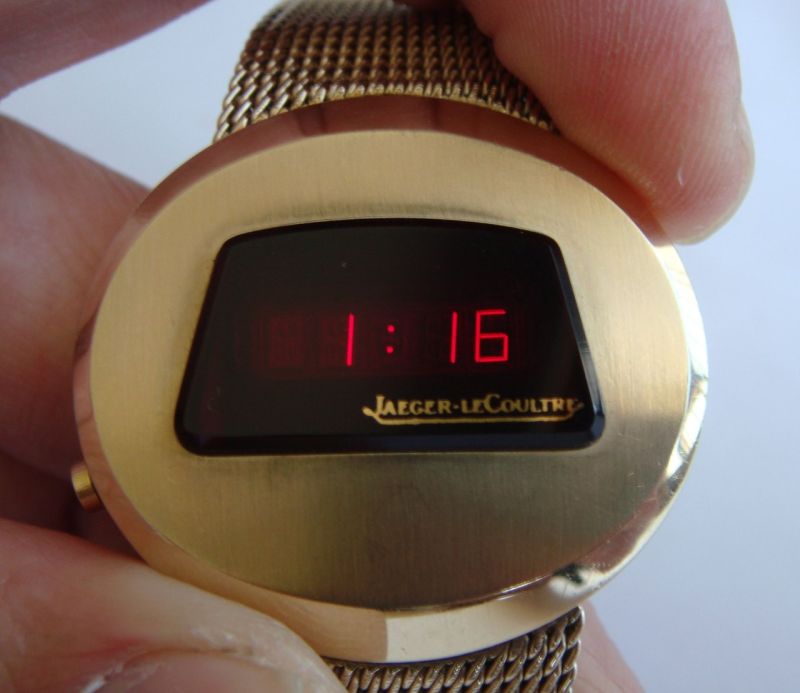 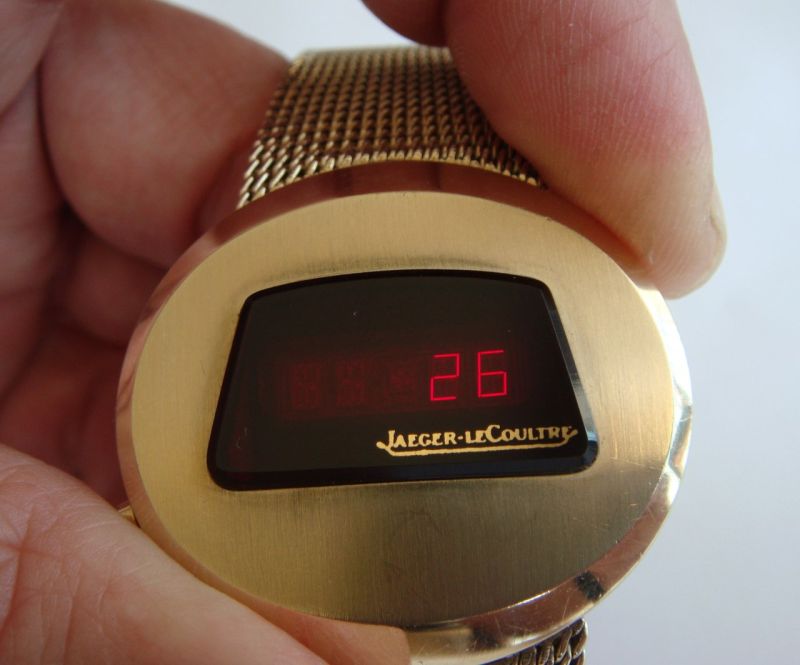 The button at 8:00 displays an abbreviated day of the week and date. When it is held down the display switches to the numeric month and date. 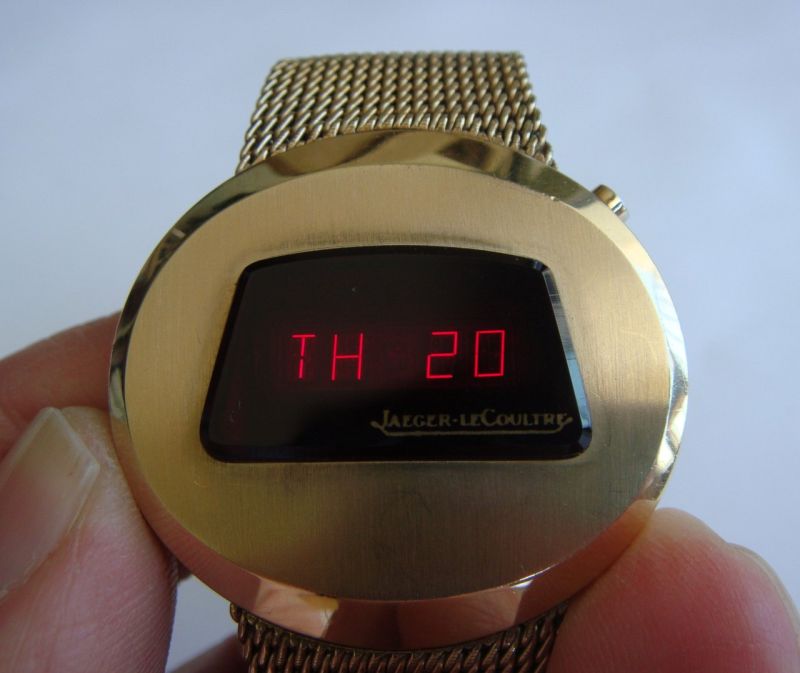 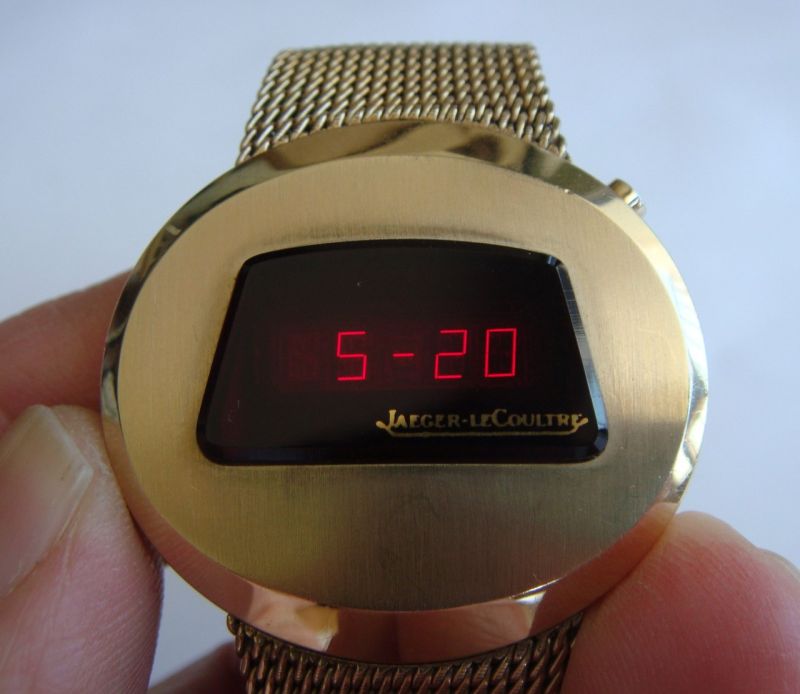 The pusher at 3:00 is used to activate setting mode and trigger between the different fields that require input (month, day, hour, etc). 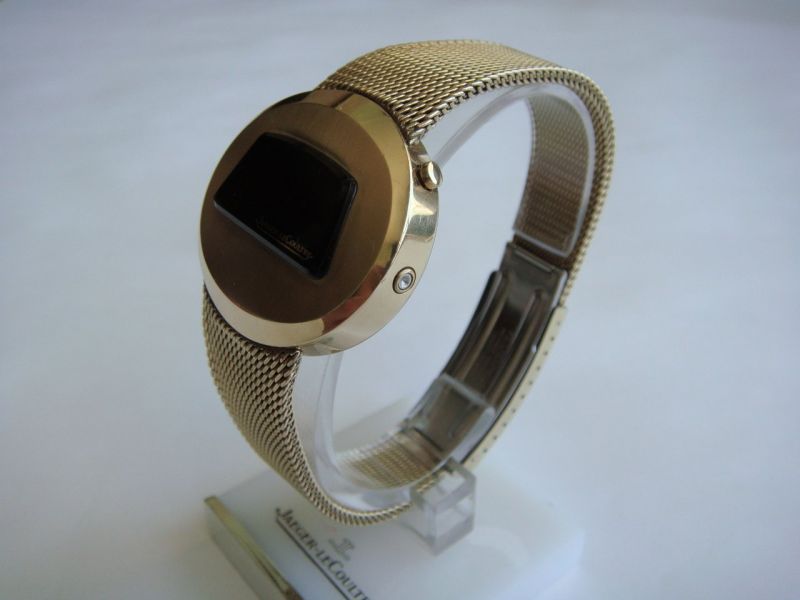 Early LED displays used a comparatively large amount of power. As a result early LED watches required two batteries. The Master LED has two screw open covers for the battery compartments so that the batteries can be replaced with relative ease, a nice feature considering how fast the watch burns through batteries. 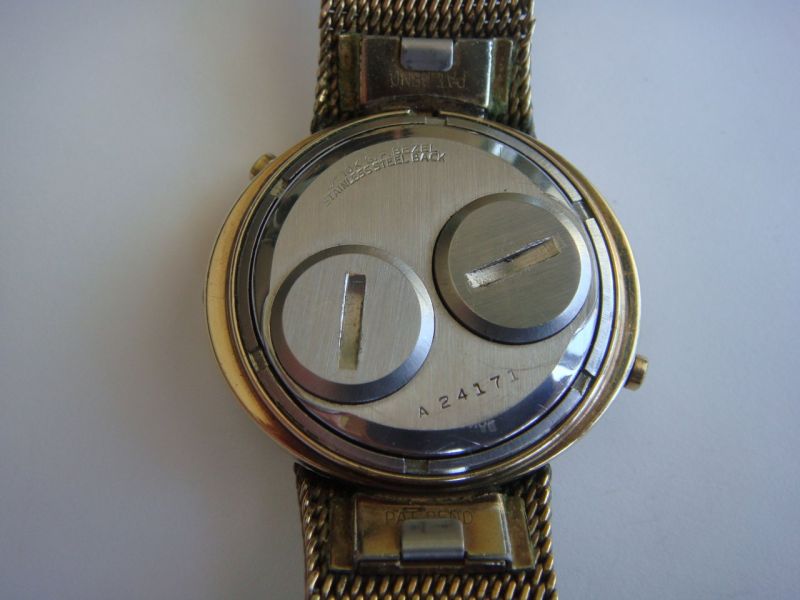 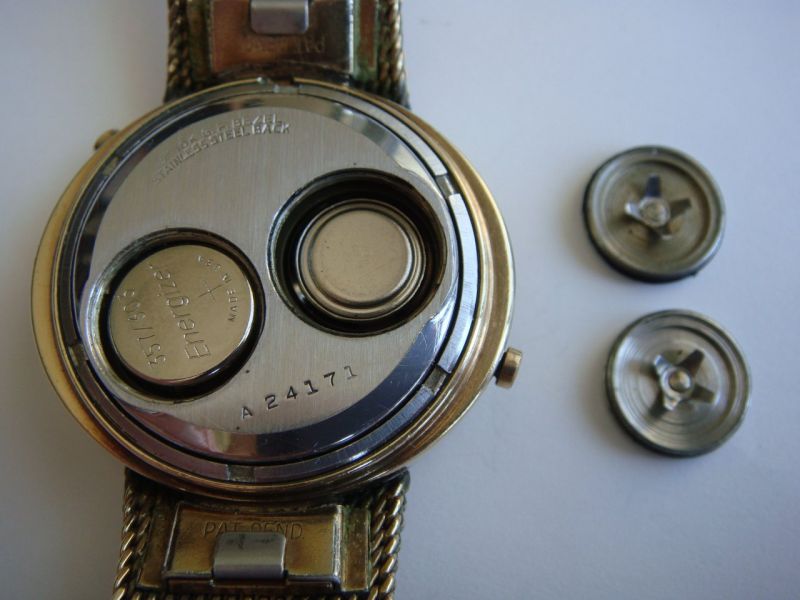 Compared to the liquid crystal displays (LCD) that became common only a couple years later the LED displays are extremely inefficient. With most LED watches the batteries require replacing after approximately six months (sooner if the display is activated frequently). With a LCD watch the battery can be expected to last for years, even while constantly displaying the time. The short battery life of LED watches, combined with having to push a button to display the time are what resulted in the rapid adaptation and eventual dominance of the LCD display. As inefficient as it is, the quartz LED movement is what makes this watch so very interesting to me. Part of the appeal is the red glow of the numbers. They just look cool. The other interesting thing about the LED movement is how it fits within the brand’s history. I’m sure that most of the readers of this post are familiar with JLC’s history as a great manufacturer of watch movements. What makes the Master LED an oddity for JLC, and therefore fascinating, is that it contains a movement that was completely outsourced. They just bought it as an off the shelf component. There was nothing unique to JLC about it. In fact, the exact same movement can be found in numerous watches from other manufacturers. The ubiquity of the movement is actually a plus these days since it makes finding a replacement movement for a watch with a dead or damaged one relatively simple. 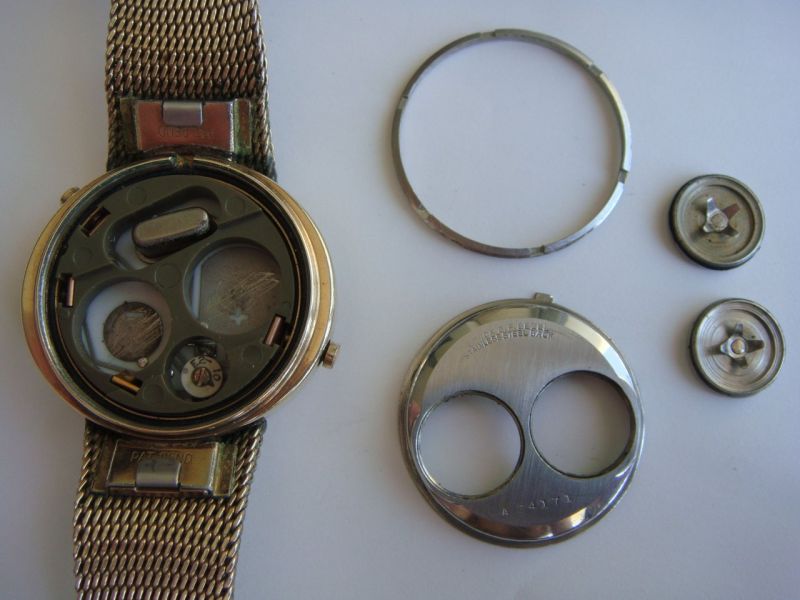 Here one can see a Benrus LED watch that I bought as a source of a spare movement. Other than the color of the plastic this is the same basic movement as the one used by JLC. 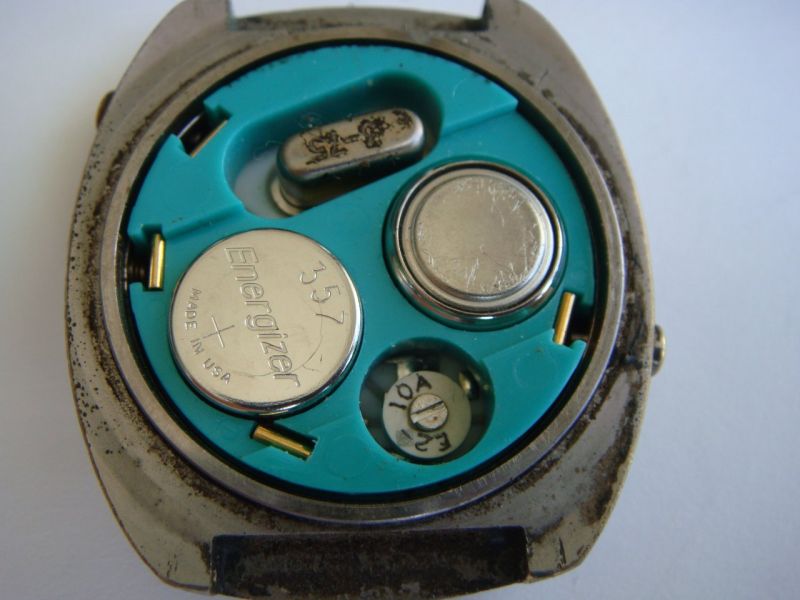 This is the movement and its’ plastic holder removed from the JLC: 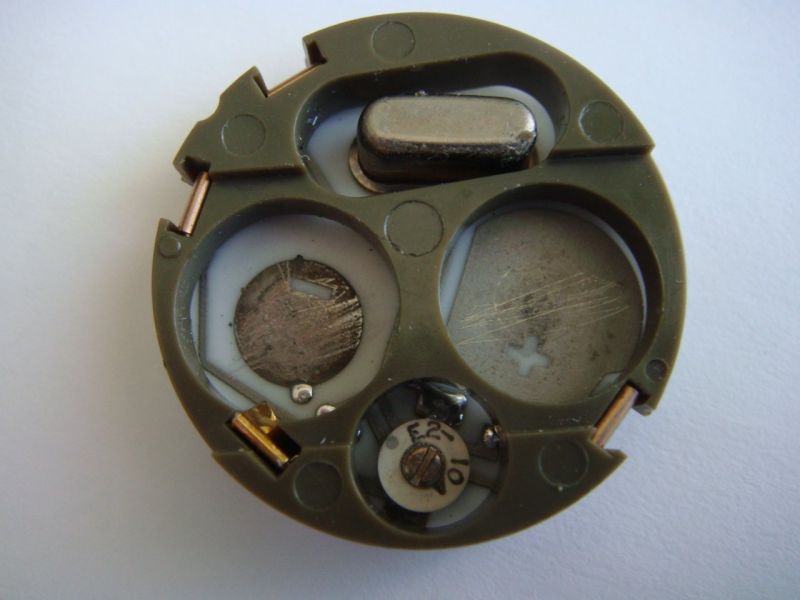 Here is the front of the movement with the display. 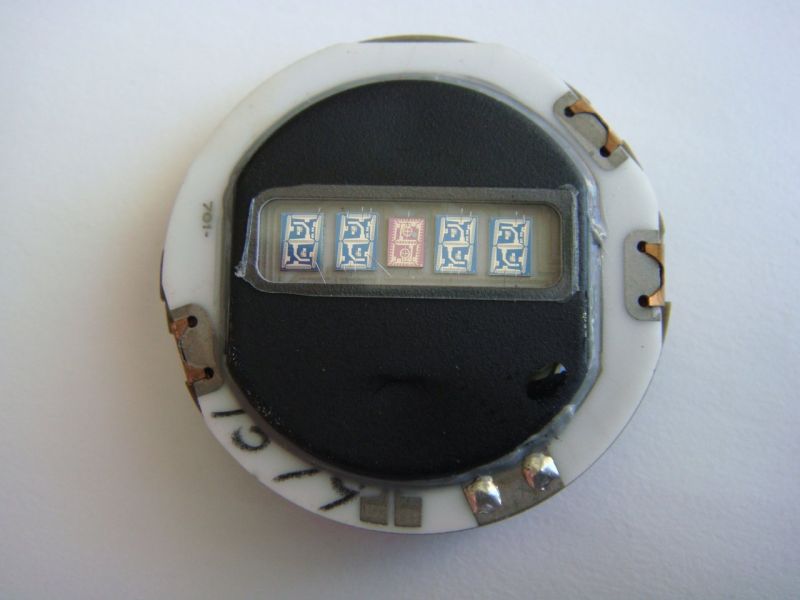 The movement JLC chose for the Master LED was manufactured by Hughes Aircraft. What I find to be most amusing was where it was made. I think it is safe to say that the Master LED is the only JLC watch ever released with a movement made in Mexico! 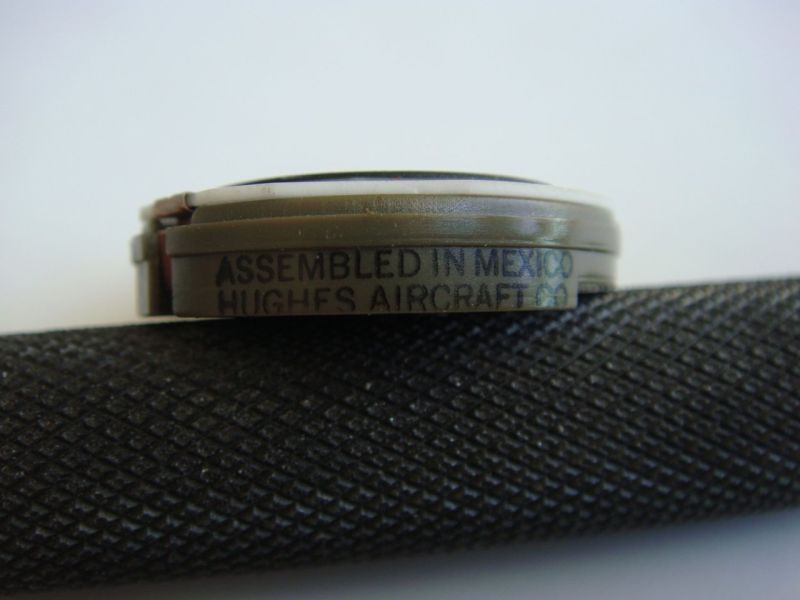 Earlier in the review I mentioned the styling as being somewhat unique. The reason that I couldn’t call it unique is due to the fact that it wasn’t. The same basic case was also produced by or for Wittnauer. JLC also produced a version like this Wittnauer that had regular lugs for a strap in place of the mesh bracelet. Unfortunately an example of the JLC version continues to evade me. I thought I had found one, but macro photography revealed that it was, in fact, yet another Wittnauer. 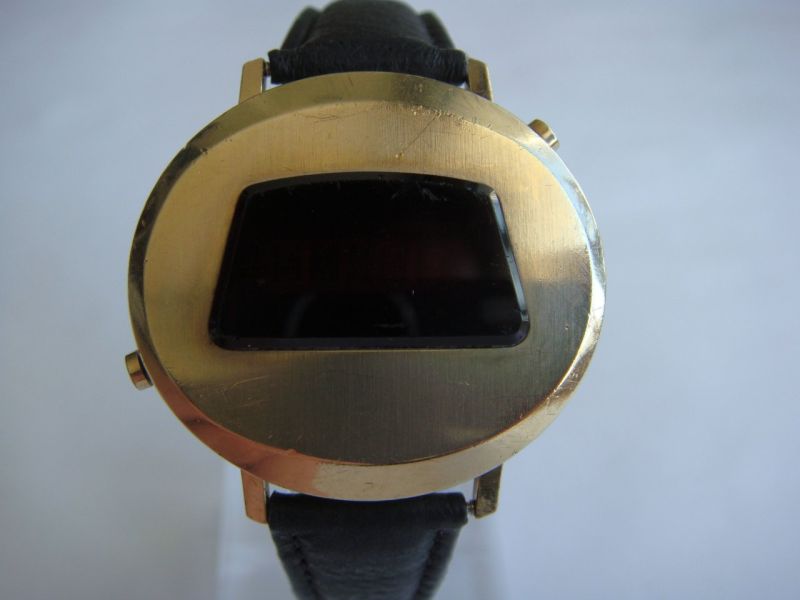 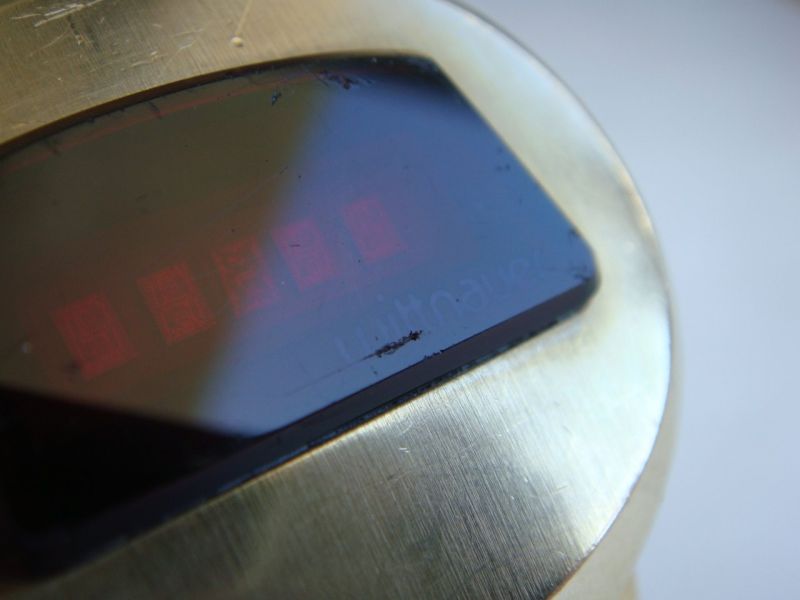 It is common for both the Wittnauer and JLC LED watches to have lost the printing on the crystal’s face over time, leaving a difficult to see “ghost image”. The first example of the JLC Master LED that I obtained suffered from the same problem. I was thrilled to have recently acquired a nearly mint example with the printing intact. 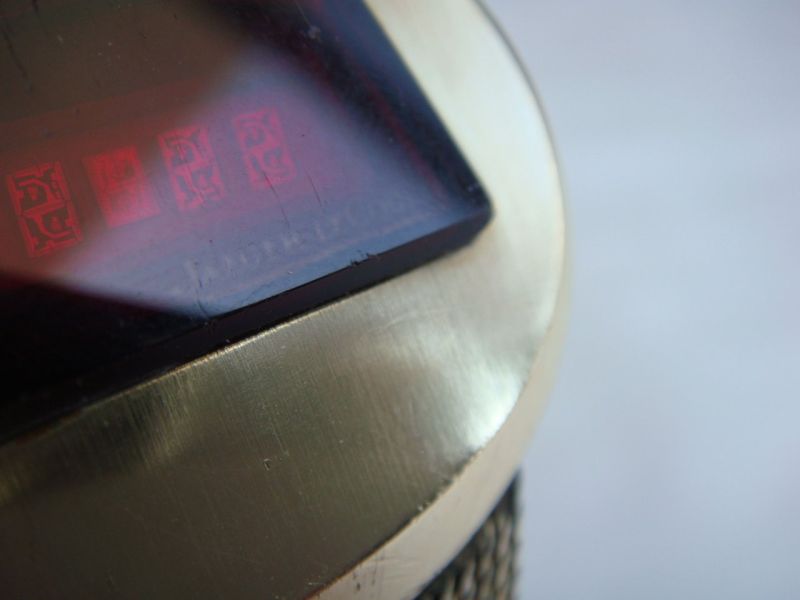 The fact that Wittnauer versions exist raises an interesting question about these watches’ provenance. Just who produced these? Were they produced by JLC and did they sell some to Wittnauer? Were they produced by Wittnauer and did JLC just slap their name on the front of some? Were they produced by a third company (like the movement)? I don’t currently have the answers to these questions. None of the books I have even acknowledge the existence of the Master Quartz LED, and information on the internet is sparse. I hope you have enjoyed this brief profile of an oddity from Jaeger Lecoultre’s (and Wittnauer’s) past. Should anyone have any further information about these models I would love to hear it. In the meantime I think I need to put on my Master LED, break out a polyester shirt, bell-bottom pants, and platform shoes and head out to the disco! 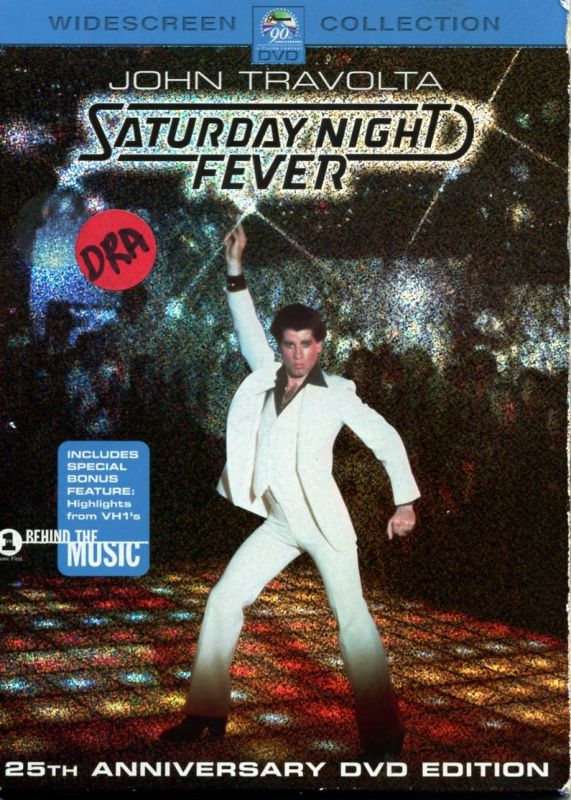 By: rovermark : May 23rd, 2010-22:48
Introducing one of the strangest watches ever produced by Jaeger Lecoultre: The Master Quartz LED, also referred to by JLC as the Master Quartz Digital. It features a quartz movement that displays the time using a light emitting diode (LED) display. With ...
login to reply

By: amanico : May 23rd, 2010-22:59
Superb post and very interesting reading. What a great journey in the 70ies! With this watch, we're somewhere between " Star Wars " and " Saturday Night Fever ", indeed. Shaped like an UFO, the Red Leds added a lot to the interest of this kind of watches....
login to reply

An easy question. Disco AND Funky!

By: rovermark : May 24th, 2010-02:32
I also wanted a LED watch when I was a child. I remember being quite impressed by them at the time. One of the fun parts of being an adult is that sometimes we get to make our childhood wishes a reality. Thanks for the comments.
login to reply

By: GregB : May 24th, 2010-02:14
Great article! I've been lucky enough to have owned 2 of the JLC Master Quartz 555 LED watches in NOS condition with all original boxes and papers. One of the watches (the one shown in pictures below) was sold last year to JLC for their Heritage Gallery f...
login to reply

LOL, Greg. It would be faster and easier for you to tell us what you don't have! :)))

LOL, Your collection probably puts mine to shame

A piece of the puzzle falls into place!

By: rovermark : May 24th, 2010-02:39
Since the examples I have found didn't come with any box or papers I didn't know that it was a reference 555. Good to know. I think it is great that when you visit the museum you can look at it and say that specific example was once yours.Very cool! Pleas...
login to reply

Picture of the Back & Serial for Mark

By: GregB : May 24th, 2010-03:10
Mark, Regarding your PM about the back & serial number, I thought it might be good to include another picture for you in the public forum. The correct back indeed does have a serial beginning with "A" and 5 digits, as you suspected: I haven't had the oppo...
login to reply

Thanks for the confirmation.

By: rovermark : May 24th, 2010-13:30
I was pretty sure that the case back was correct, but comparing it with a known good example confirms it. Congratulations on having eight pieces in the Heritage Gallery. I thought having one in it was cool. Eight is amazing!
login to reply

Scans of the Manual for Mark

By: GregB : May 24th, 2010-03:22
Mark, Here are the scans of the manual for the watch that you requested in PM. I though others in the group might also be interested....
login to reply

Thanks for posting these Greg.

By: rovermark : May 24th, 2010-13:25
Unfortunately these reveal that my watch has an incorrect movement (based on the setting instructions)! Luckily one of the Wittnauers I have has the same movement referred to in the instructions so it looks like a swap is in order.
login to reply

By: blomman Mr Blue : May 24th, 2010-10:42
I think many of us here dream of taking one or two watches with us home from the Heritage Gallery… But you actually put one there – super cool! Congrats!!! Best Blomman
login to reply

By: respo : May 24th, 2010-05:41
This whole thread is really interesting and fun to read. The 555 is actually kind of cool looking, IMHO. Well, it kind of answers the question, "What was JLC doing in teh 70s?" Thanks for posting this. Perfect reading for a gloomy Monday morning. respo
login to reply

The red glow of the LEDs can warm your day : )

I was aware of the GP connection.

By: rovermark : May 24th, 2010-13:53
The information on Wittnauer makes sense. Thanks. The JLC and GP connection is interesting. While JLC was a part of the Beta 21 project I believe that they only used it in one watch, the 1970 Master Quartz. By 1972 they were sourcing their quartz movement...
login to reply

Thanks for info on the GP sourcing of the Master Quartz

By: GregB : May 24th, 2010-14:26
I stumbled upon a mechanical Master Quartz in NOS condition a few years ago (pictures below), so I couldn't resist the purchase. I'm not generally a quartz fan, but the watch is quite attractive and intriguing. I had never realized that G-P supplied the m...
login to reply

By: Stefan : May 24th, 2010-07:09
... WOW it is really eye-opener... if wearing this retro watch and walking along streets, i am sure it will be attracting a lot of attentions, especially from those young people. never seen this mode before, such look with gold color case and bracelet is ...
login to reply

By: rovermark : May 24th, 2010-13:58
It's funny you mentioned how young people would respond. A younger friend of mine who has no real interest in watches always asks me where "his" watch is. He really wants me to sell this one to him. I've told him that the next time I see one available I'l...
login to reply

By: blomman Mr Blue : May 24th, 2010-10:36
For an electric post! I have seen this watch a couple of times but never paid any real attention because of the battery… Very interesting, thank you! Best Blomman
login to reply

I'm generally not interested by watches that need batteries but...

By: rovermark : May 24th, 2010-13:14
The Master Quartz LED is one of the exceptions. I really wanted (and didn't get) a LED watch as a child. Since I collect JLC, once I was aware of its' existence it became a must have.
login to reply

By: peregrino : May 24th, 2010-14:20
A nice little piece of nostalgia! Funny and scary at the same time. JLC made in Mexico... God damn!!! I will certainly continue to enjoy winding my watch every morning. Best, Rob.
login to reply

I think I'll need to wear my Hometime today to purify myself!