By: Ornatus-Mundi : October 31st, 2013-16:29
The Swatch Group still holds a market-dominating position* for mechanical movements (70% market share) and key movement components (90% market share), respectively, with its daughter companies ETA and Nivarox being the main players. In 2009 Swatch Group announced that its intention to stop deliveries of movements and movement components to customers outside Swatch Group. Ever since then the Group found itself entangled in long back and forth going negotiations (documented here ) with the Swiss Competition Commission (WeKo).
This month both parties finally reached an agreement regarding the phasing out of complete movements.
The parties agreed to set the average delivery volume between 2009 and 2011 as reference point. In the years 2014 and 2015 ETA is requested to supply 75% of the reference volume, for 2016 and 2017 65%, and in the following two years 55%, respectively. After 2019 ETA is no longer obliged to deliver to non-Swatch Group customers. The agreement should buy those companies time to identify and/or establish alternative supplies.
Compared to a previously rejected agreement drafts the transitional period has been shortened by two years, the truncation of deliveries however less steep. In addition Swatch Group is no longer allowed to distinguish between those customers who already set up their own movement capabilities and those that have not - all customers are to be treated equal.
There is, however, a caveat: for SME watch companies (workforce up to 250 employees) Swatch Group may be obliged to continue supplies in cases of hardship. Furthermore WeKo reserved the right to evaluate the situation (sufficient alternatives to ETA movement available) and may theoretically extend the transitional period. Likewise, Swatch Group may apply for a shortened period should adequate alliterative been established earlier. 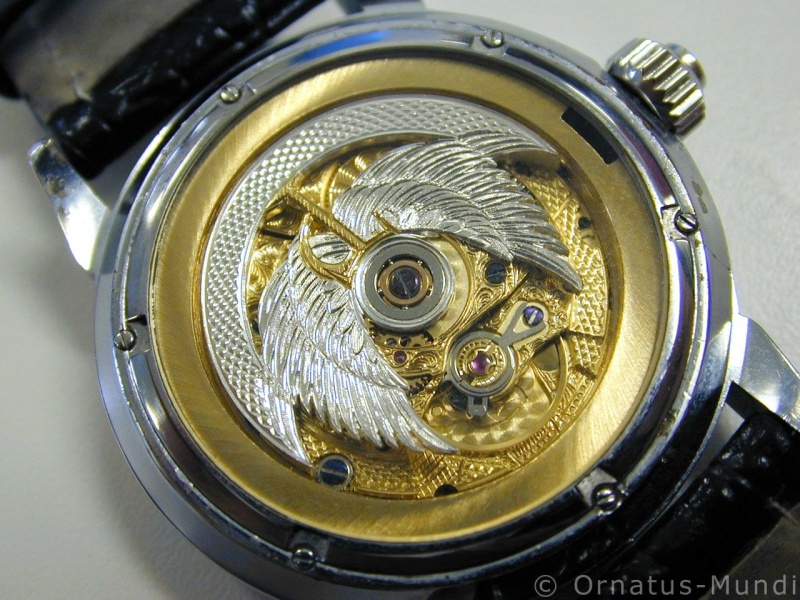 An ETA 2824 movement beautifully reworked by independent watchmaker Thomas Prescher
This agreement confers about 70 to 80 of ETA's customers and a market volume of several hundred Mio. Swiss Franks.
What has not been finally agreed upon is the phasing out of movement components. WeKo reckons that the market is far away from dependency on Swatch Group, thus the Group is obliged to continue supplies in current quantities. This is in part due to patent litigations which further hamper the establishment of alternatives (making this effectively a self-enforcing situation).
Swatch president Nick Hayek appreciates that WeKo has send a signal to the entire industry to invest and build up their own capacities. This is particularly targeted to Swatch's main competitor Richmeond Group which, according to Hayek, invests only 30% of its investments into manufacturing (compared to Swatch's 70%). Hayek also reminds that it took ETA only an investment of 80 Mio. CHF to develop the Swatch Sistem51 (note by the author: release to the market of this watch has just been postponed due to technical problems…).
Thus it comes with no surprise that several independent watch brands such as Louis Erard voiced their concerns that WeKo just reinforced the already dominating position of Swatch. On the other hand these companies have great hopes that time is sufficient for movement manufacturers like Sellita to scale up their production to be able to fill the void in time.
Cheers,
Magnus
-----
*) Suppliers outside Switzerland excluded by WeKo since the label 'Swiss Made' is considered a special marketing asset.

... dependence on one company must be good for diversity and longevity of the industry. There will be some short term pain however, but the companies that look forward and invest appropriately should benefit in the long term. This 'timetable' to change should provide more certainty and help companies to set appropriate goals.

But it seems counterproductive for the industry to limit access to parts for old ETA movements. There are so many out there and owners will want them repaired. That is a longer term problem that won't be solved with restricted access. And the Swiss watch industry does not want to alienate owners.

I certainly see the importance of Swatch not suddenly cutting off other watch companies from their movement supply, though I can't imagine how the executives of the other companies didn't see that such a move would be possible and made arrangements.  With multiple years of notice, I have no sympathy for companies that can't find other alternative for sources of complete movements.

On the other hand, I realize the story is a little different when one is talking about hairsprings.  First-rate metallurgy is a little tougher than reworking an out-of-patent movement and setting the CNC machines to cutting them out.  The economies of scale being what they are, a natural monopoly develops here.  I might make Swatch divest itself of Nivarox and bar the new owners of nivarox from any partiality to individual watch companies, though I concede that this would stifle further advances.

Then, of course, one comes to realize that a lot of "manufacture" movements aren't technically as good as Eta movments and their clones.

By: Ornatus-Mundi : November 4th, 2013-15:04
are big issues. While almost any watch lover would appreciate increased choice from more in-house movements or a greater availability of standard movements, few are willing to pay the price for this. ETA has a great reputation for providing the industry with proven and reliable workhorse movement that just do that - work.
Since the construction is decades old as are the tools, the production equipment can be considered to be written off. ETA makes significant profits from supplying these movements (even if they declare otherwise).
However, for any new player in the market the hurdles are considerable. Customers (end customers as third party watch brands) are used to both: ETA reliability and prices. Now an ETA price can only be achieved through the really ow cost of production I mentioned plus the decades of experience and optimisation that went into each and every ETA movement.
Any new entry into the market would have to pay a high prices for construction, tooling and testing which somehow will reflect itself into the finally price.
I talked to quite a lot industry people (those who could potentially assist in developing ETA alternatives) who all say the same - people want ETA quality and prices.
This somehow will not pay out.
Cheers,
Magnus
login to reply
By: Whirling : November 4th, 2013-16:02
Magnus,
You certainly know much more about the topic than I do, so I believe you when you say that Eta can produce quality at a price others can't match.  Nonetheless, I find it remarkable that a company such as Sellita wouldn't be more competitive.
Also, what percentage of the cost of a watch is the movement, when that movement is an Eta 2824-2, for example?  I'm not sure how many watches the world needs where the bulk of the price is a standard-grade 2824.  For those USD 5,000 watches with higher grade (hopefully) 2824s, I'd like to think the margins were large enough for the companies to locate alternatives...perhaps I'm naive?
Perhaps Seagull could open a factory in Switzerland.  With Swiss labor, I wonder what Seagull would charge for their 2824 clone?  I've read technical reviews of it that say it really is comparable to lower grade Eta 2824s.  Plus, Switzerland has a lot of immigrants and asylum seekers who could use the work, yes?  I am, of course, kind of joking...

This is just my opinion, but I would like to see all of Swiss horologie move up-market...Qualite Fleurier or Geneva Seal level for all "Swiss Made," or, at the least, COSC (though I realize this doesn't imply craftsmanship beyond timekeeping ability).
Regards,
Jon
login to reply