By: nikolaj : December 20th, 2010-07:10
hello everyone, I stumbled upon these two. They have different cases and dials (one the regular compressor case and more patina). Any comments or input as to the originality? Are they both good? Thanks in advance! Nikolaj 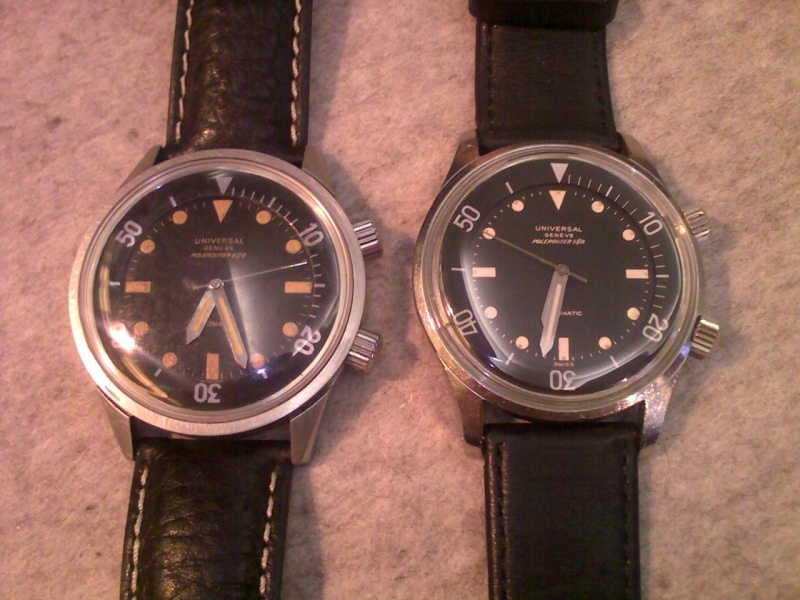 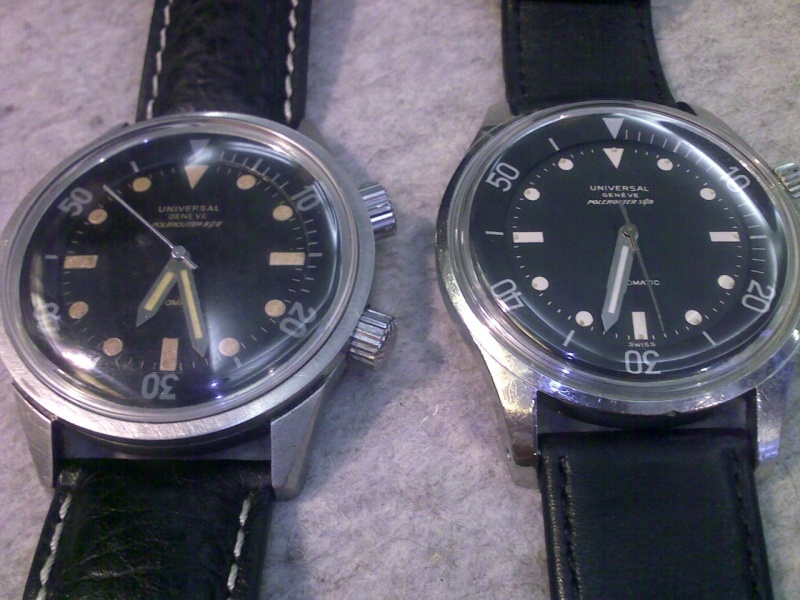 Further, I was hoping for a strike of luck in getting a fast positive reply as I was about to jump on one of them. Buuut, I regained my senses and will done a bit more research before pulling the trigger.

A few more observations and clarifications: Iwas surprised to see the difference in cases (only the one on the left has the well known beveled edges of the super compressor case) also the inner time setting ring of the one on the left overlaps a bit with the "Swiss" marking on the dial. The one on the right hand side of the photo seems almost redone with the lack of tritium patina and small dots/drops of relume on the large white hour dots.

After posting my first post , I found a post from Nicolas "Someday I will get a Polerouter Sub". In that post he shows two different PR Subs and I note with interest that they are also featuring two different cases (the same two as I saw today as far as I can see). But, but.... I see I also notice the super compressor case in both polished and brushed version??? Were both available (I somehow doubt that) - anyone knows which is correct? Further, Catherine had an interesting reply to Nico's post in which she mentions that the UG's are notorious for using whatever parts they had in hand.

Anyway, I am a little wiser now, but would still appreciate any input you may give on the subjects raised.

By: LouS : December 30th, 2010-10:37
...after all, how many places can have two Polerouter Subsfor sale at the same time? Munich, right? I looked at these in early November and I too walked away, not so much because of any concerns regarding authenticity, but I thought the price was extremely spicy!

In any case, I have a related question - I hope you don't mind me piling on to your thread. I recently got a Polerouter Sub, and like any paranoid watch collector, I am now having doubts regaridng authenticity. Below is the watch, and below that a detail shot I'd love to hear what people think about.

I'm struck by the odd spacing between the "è' and the "v" in "Genève". I'm reassured to see that the watch you posted on the left, in the same case and with the same slight difference in the lume of the hands and hour markers, has the same little abnormality in "Genève" (I assure you it is not the same watch) as in fact do many P-Subs pictured around the web. Yet it seems odd to me that something like that would pass UG quality control. Am I overthinking this? I've love to hear what the experts of the forum think.

Many thanks in advance for your opinions.

Munich it was, and yes they were very spicy indeed!

Congratulations on your watch! It looks very good. Of the two styles of the P Sub featured, I prefer the case and dial that you got (the one on left in my picture).

However, I did not notice the odd spacing between the letters you refer to while in the shop but now that I see it I also think that it is remarkable that something like that would pass quality control (at least it would be unacceptabel in todays' market, but I do think QC was slightly more loose back in the 50-60'ies). Also, from the previous post that I refer to in my post above, I get the feeling that UG's from that period are not amongst the most consistent of models as there appear to be several different seconds hands applied and also the inner bezel is sometimes with lume on the first 15 mins and sometimes not - and I believe that both versions are correct.