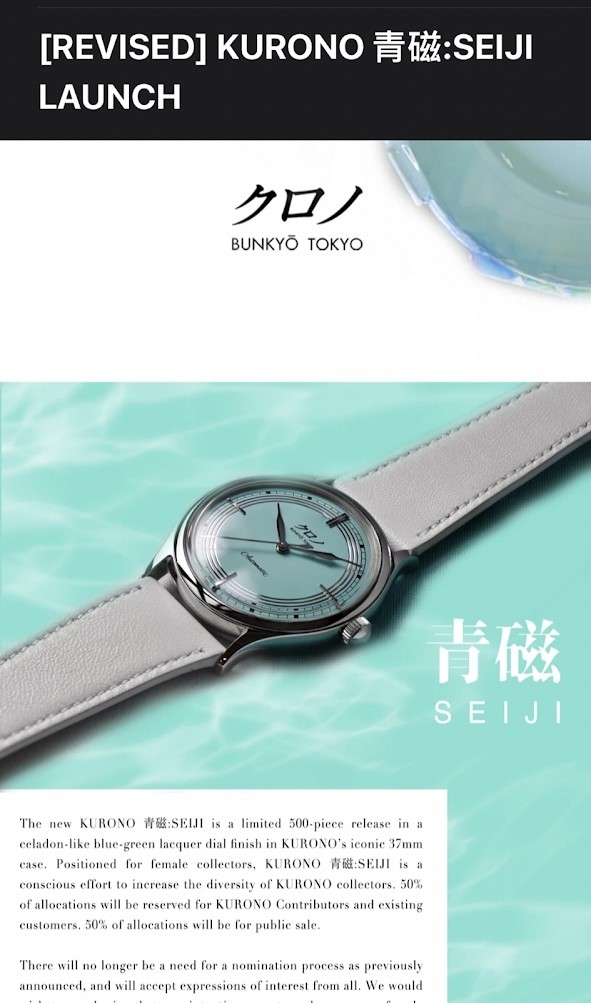 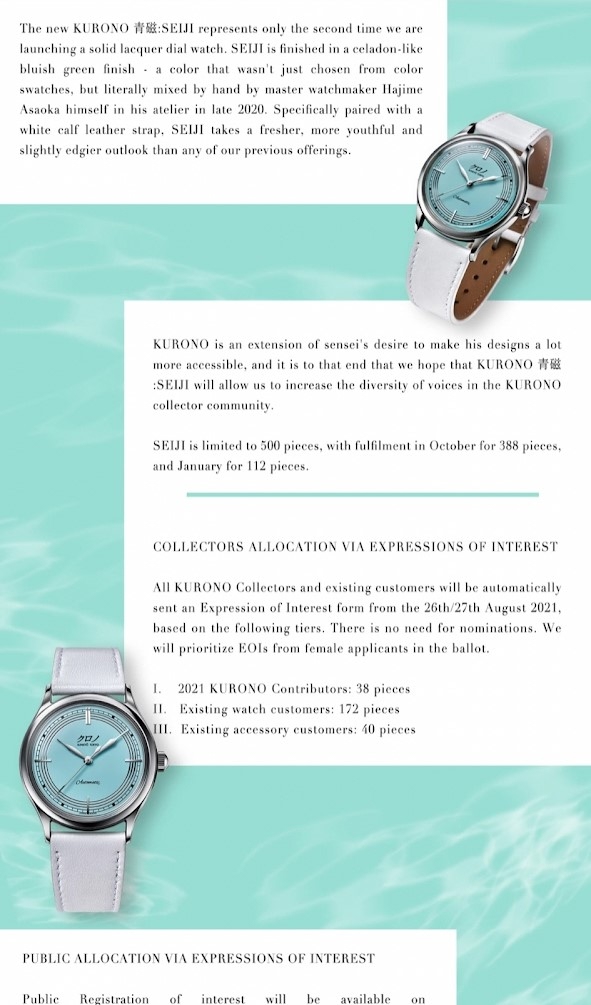 By: sham1 : August 25th, 2021-15:17
they should have got their act together a lot better so as not to confuse potential customers.  Small independents already have the disadvantage of people being worried about the continuity, longetivity and after sales service of the brand. At least they could organise the launch of their products much better. I have little doubt that this lovely looking watch would sell out even if Kurono released 2000 pieces.
login to reply

By: Lankysudanese : August 25th, 2021-16:29
It’s a lovely watch, but judged by its merits alone, it wouldn’t have gotten this much interest.
login to reply

By: sham1 : August 26th, 2021-08:29
many would like to have one of Hajime Asaoka's creations so this is probably the easiest and cheapest way to obtain one.
login to reply

By: Lankysudanese : August 26th, 2021-09:40
And it was a wonderful and well-executed plan. But then the “IN” crowd got into KT and it became an overnight sensation (much like Journe after a certain second hand retailer went on the blitz offensive). All of a sudden, you just HAD to have a KT in your collection, regardless of your tastes or wrist size or requirements for hand/movement finishing etc etc
Case in point: my TOKI is en route 😜🤦🏿‍♂️
login to reply

By: BigFatPauli : August 25th, 2021-15:22
Imagine someone applies who identifies as female.  KT looks at their social media and things, "Nope, this person is clearly a guy" and denies the purchase.  That's a strong case, in this day and age, for discriminated.
Oddly, gender seems to be an issue not to touch right now.  It feels ill considered.
login to reply
By: mdg : August 25th, 2021-16:17
login to reply

By: FabR : August 26th, 2021-01:15
I find it even more sad than fun that a young brand, rather than working hard on producing serious watches and being competitive in today's market, chose the much easier route to traffic in political correctness...and even failed at that.
Time will tell, but I wouldn't be surprised if their few buyers will now start looking for morally and horologically sound content elsewhere, and this brand will quickly disappear from the scene ;-)
login to reply

By: Lankysudanese : August 25th, 2021-16:33
Instead of dedicating the manpower to perusing people’s IG and Twitter accounts, why not dedicate it to designing a new case/watch. The current case and dial design is getting old/dated.
login to reply

By: BigFatPauli : August 25th, 2021-20:52
But if the wrong narrative starts on the forums or even in media it could be suicide for the company.
At the end of the day, as it stands, it is actually discrimination: They are discriminating based on gender.  Imagine they said, "We are only selling to men" or "We are only selling to people of Japanese decent" or "We are only selling to heterosexual men" or "We are only selling to Christians"...  People would be all over that and, effectively, all the statements are the same - The are all discrimination in some form.
They say "Women only" which, really mean "No men".  Imagine it said, "No Jews."  It's a very, very slippery slope...
To me, they are taking a totally unnecessary risk with this and the right angry person could cause a lot of damage to the brand and are really, yet again, praying on the ignorant watch buyers and catering to flippers (by creating an ecosystem conducive to the quick flip).
They could have taken a very different approach and spent more than 30 seconds "designing" this watch and catered to actual females.  Patek, Van Cleef, MB&F, Hermes and countless other great, legitimately creative, brands have created watches that woman want to buy and men (generally) don't.  If they actually cared about the female market, that's the approach they would have taken.  Instead, they put their typical minimum amount of effort and selling a cheaply made watch with hype alone.
To me, it's just more modern watch world non-sense.  Cheap crap in a fancy box falsely labeled "exclusive".   Who actually likes this brand?  Gimme a break.
login to reply

By: Mister M : August 28th, 2021-03:18
supplier to men”, “Our titanium model is tough on women because it’s only available for men”, “At least there’s one thing a man can rely on”, “Almost as complicated as a women. except it’s on time”. I find these amusing, but in today’s world not PC.
login to reply

By: Lankysudanese : August 28th, 2021-06:17
Your examples are extremely accurate about a time when the PC culture wasn’t there yet.
But in the era of major concerns of privacy (and invasion of privacy), for a company to blatantly ask for your social media accounts/handles and state that they will allocate allocate a luxury product based on that content and the applicants gender, was asking for trouble. No two ways about that.
As always, Hajime is quick on his feet and admits his mistakes, which is certainly a virtue.
We can always agree to disagree. Such is life
login to reply

By: Mister M : August 28th, 2021-08:35
have been as transparent and said this colour is for the ladies, and picked the customers who he wants to sell to ie. women customers; and not tell anyone. The discrimination with watches was only going to be sex discrimination as watches are only aimed for men and women. So bringing in creed, race or culture was unnecessary. At the end of the day, I totally agree, it was discrimination by KT. You could still make a case even after he he changed the policy as women will still get priority.
login to reply

By: mhz vph : August 25th, 2021-16:18
To something more normal (ie equitable).  Props for listening to criticism and adjusting accordingly.
login to reply

By: BigFatPauli : August 26th, 2021-00:43
Put down the glass of Kool-Aid. There is, literally, nothing special or rare about this watch, or any watch, they have ever made.
They only thing that Kurono Tokyo actually makes is hype.
login to reply

By: mhz vph : August 26th, 2021-01:51
Merely their response to justified criticism. I happen to like the color and the design, but I have no experience with them in the metal. I can't speak to the quality. And I don't need to be lectured on hype. My collection is about as hypeless as it gets 😂
login to reply

By: BigFatPauli : August 26th, 2021-11:00
But saying they "adjusted accordingly" when it comes to allocation isn't accurate.
login to reply

By: mhz vph : August 26th, 2021-14:00
Were directed towards the idea that the watch should only be available to women (and all the problems with implementing such a scheme). While plenty have complained about their low production numbers, it wasn't really the primary issue with this particular release. As such, when I say they have corrected their allocation issue, I mean that it has returned more or less to their normal system. If you didn't like their system to begin with, then of course you would not consider the allocation to be 'fixed'.
All I am saying is that Kurono did something stupid, their audience showed their disdain to it, and Kurono listened and corrected. This is good behavior. Yes, it has no bearing on quality or production numbers, but that was not what the buzz surrounding this release was focused on.
login to reply

By: Lankysudanese : August 26th, 2021-18:43
Compared to other micro-brands, they have always kept their fingers on the [social media] pulse
login to reply

By: Blue and White : August 27th, 2021-17:23
…and so do I on your provocative (polemic?) statement. Case and dial are IMHO simply beautifully made AND at quality that justifies the list price point.
I also beg to differ with the assertion that KT’s success is based on a hype only. People have different tastes and there seem to be enough watch aficionados who appreciate this design.
login to reply

By: Tim_M : August 25th, 2021-16:20
For hundreds to low thousands of dollars, there's a world of cool Longines, Mido, Tissot, Sinn, Seiko, and even Omega and Breitling products from the last 30 years all waiting to be bought and enjoyed. No, these watches won't impress total strangers on instagram, but they will be satisfying to own and easy to service.
Best,
Tim
login to reply