By: Age_of_Surfaces : April 7th, 2021-14:04
This is a 2002 Daniel Roth Datomax in 18K pink gold, ref. 208.L.40.11.CN.BA. Here shown on a matt coffee lizard Camille Fournet strap. At 35mm x 38mm it recalls the classic sizing of his coveted watches of the early-to-mid 1990s.
Mr. Roth had of course parted ways from Bvlgari by the time this watch reached market, but it's sufficiently evocative to me of his early masterpieces to warrant a buy. Its classic proportions, the signature grey vertical line guilloché, a second guilloché for the small seconds, the prominent (even slightly quirky) date complication, generous perlage on the movement and a guillochéd pink gold rotor, make this watch an enjoyable little bundle front and back. All for the price of a Rolex Submariner even. Just imagine.
It's my second Daniel Roth and my wish now is to chase down something currently quite hard to find: a BB 2147. Any tip-offs welcome. 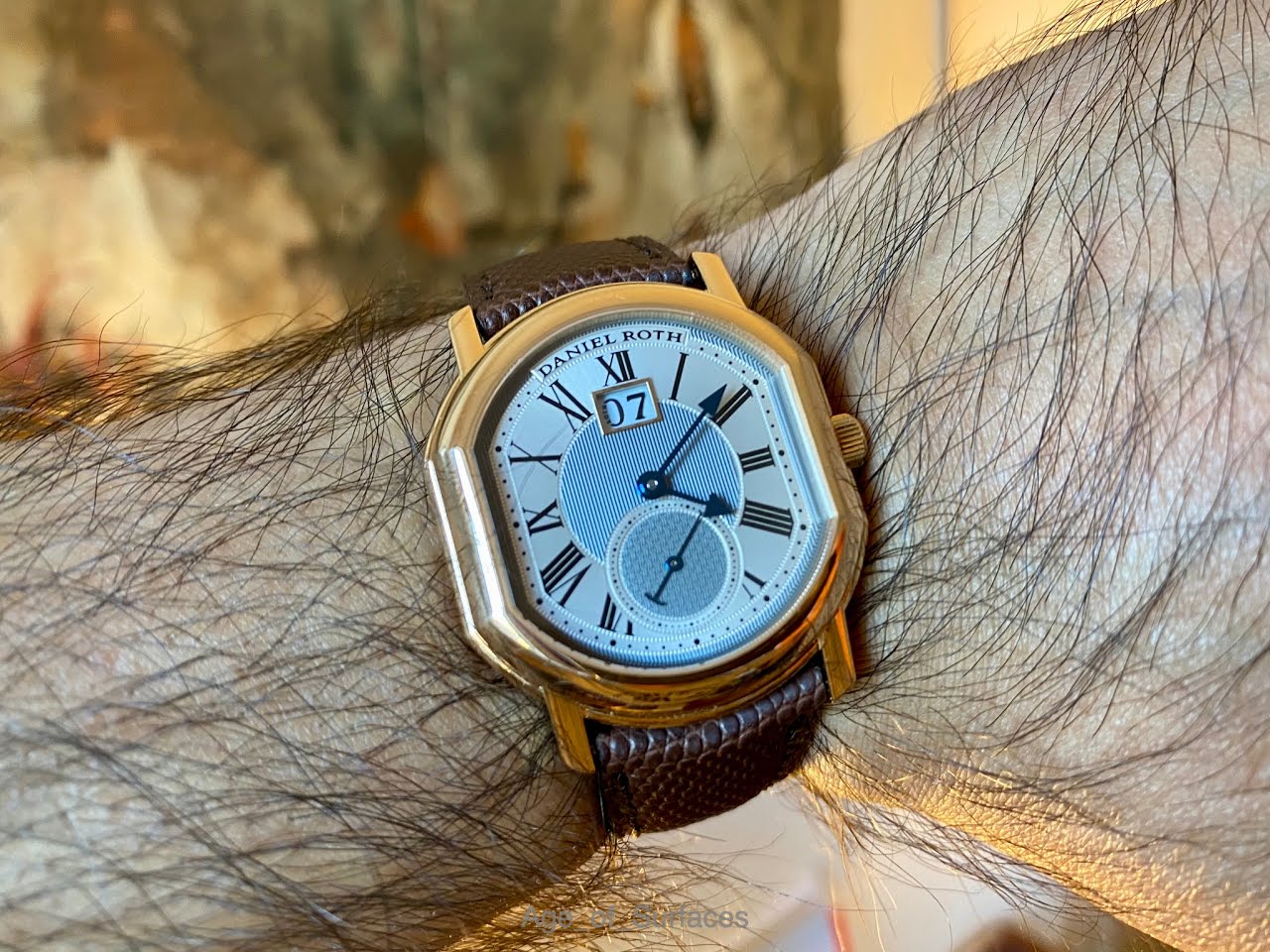 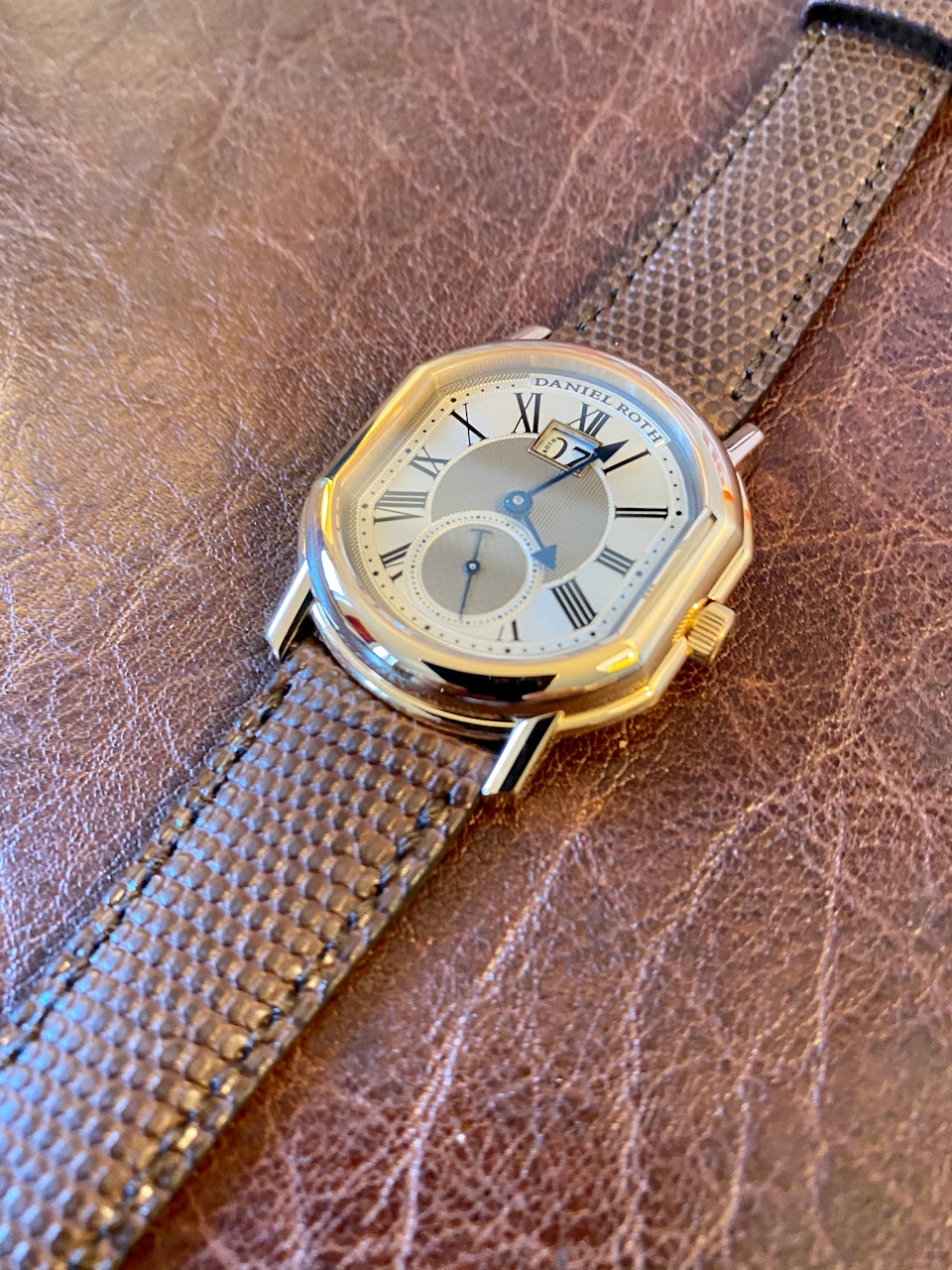 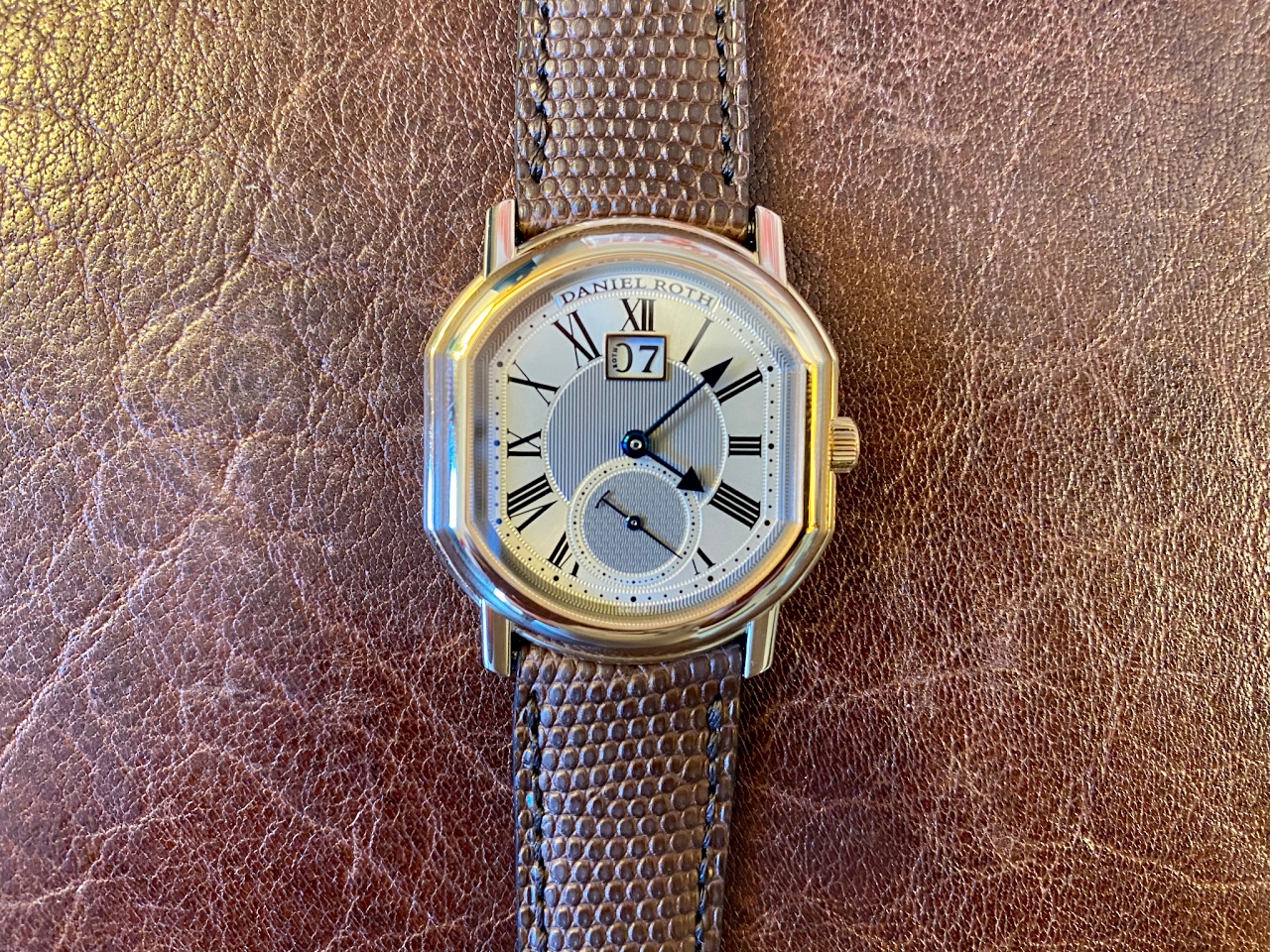 By: Age_of_Surfaces : April 7th, 2021-17:03
This dilution reached its conclusion when Bvlgari finally dropped Daniel Roth (the name) from its watches. If I'm not mistaken this began at or around the time that LVMH became its majority owner in 2011. By then of course Daniel Roth (the man) had already been making watches under a different monicker for a decade. It's fairly clear what kind of watches Monsieur Roth would make when operating independently. We saw that from his creations between 1989 and 1995. Many of these were - and still are - ethereally beautiful. The same can be said for his two-minute tourbillons of 2001-to date. The rest? Approximations and spin-offs that took a lead from Monsieur Roth's inspirations to produce watches of uncertain (and in some cases ghastly) aspect.
login to reply

By: Watchonthewrist : April 7th, 2021-22:56
I am a huge fan of DR watches , such elegant and timeless beauties with a own design.
I also have a few DRs on my wishlist but currently happy with the ones I already got . 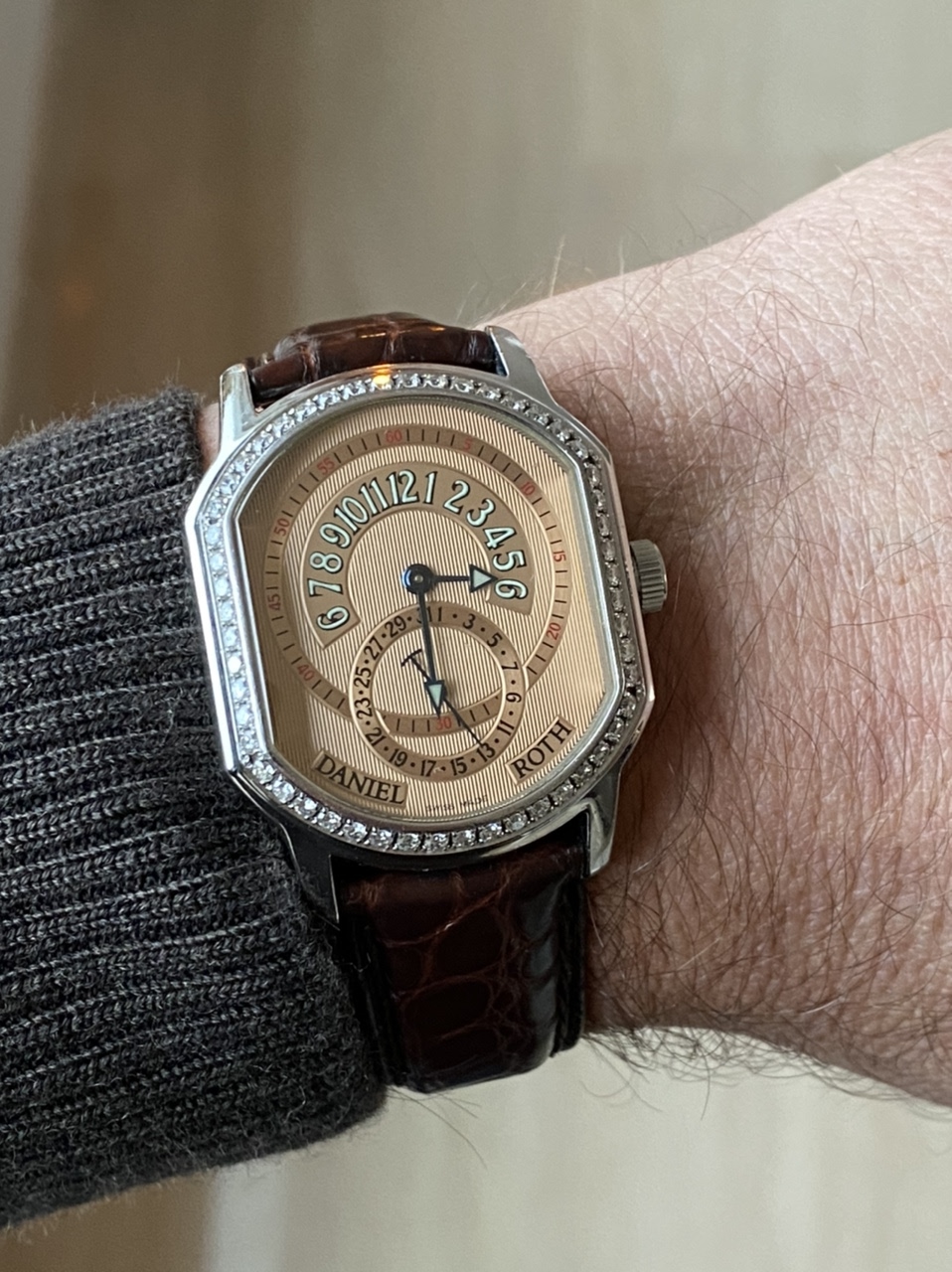 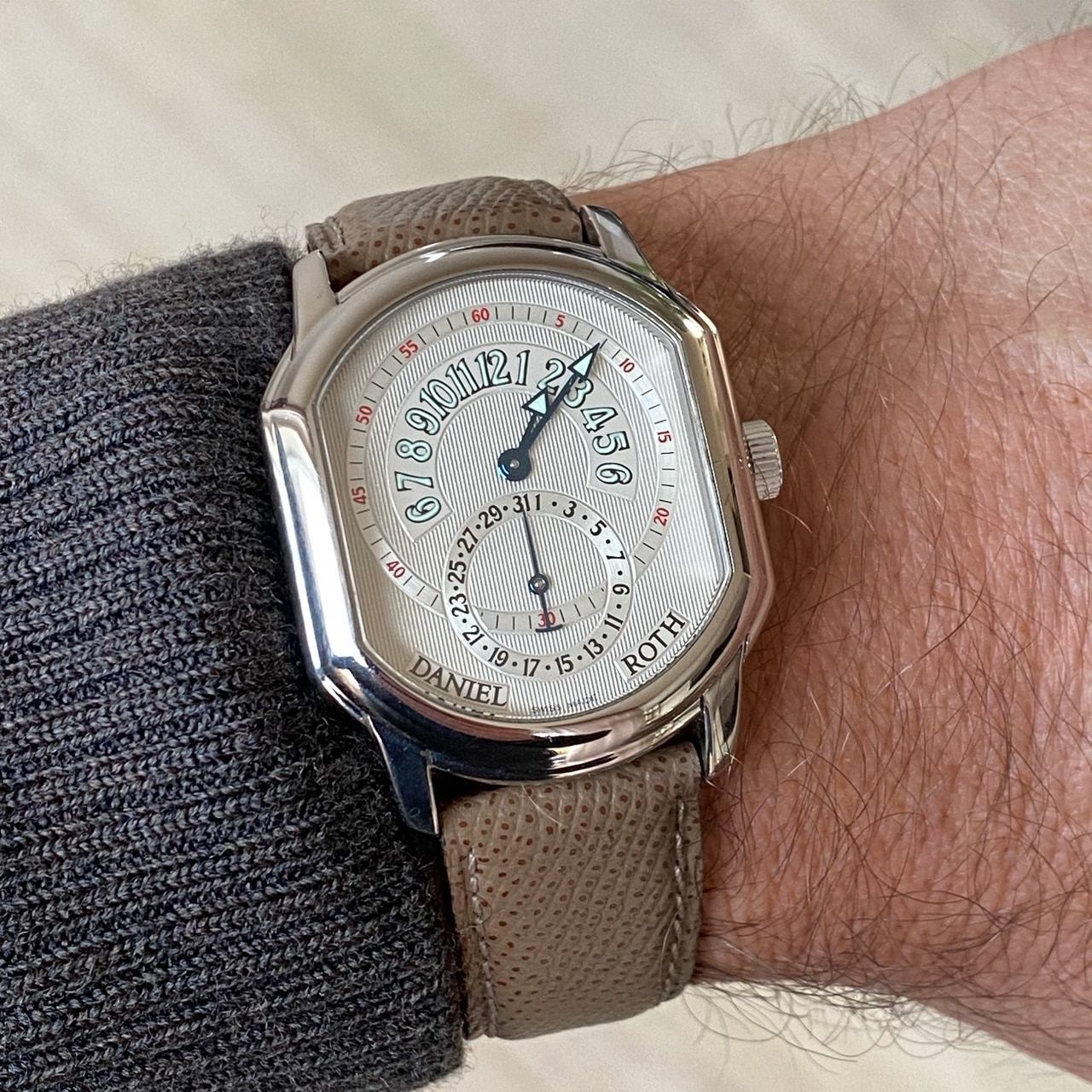 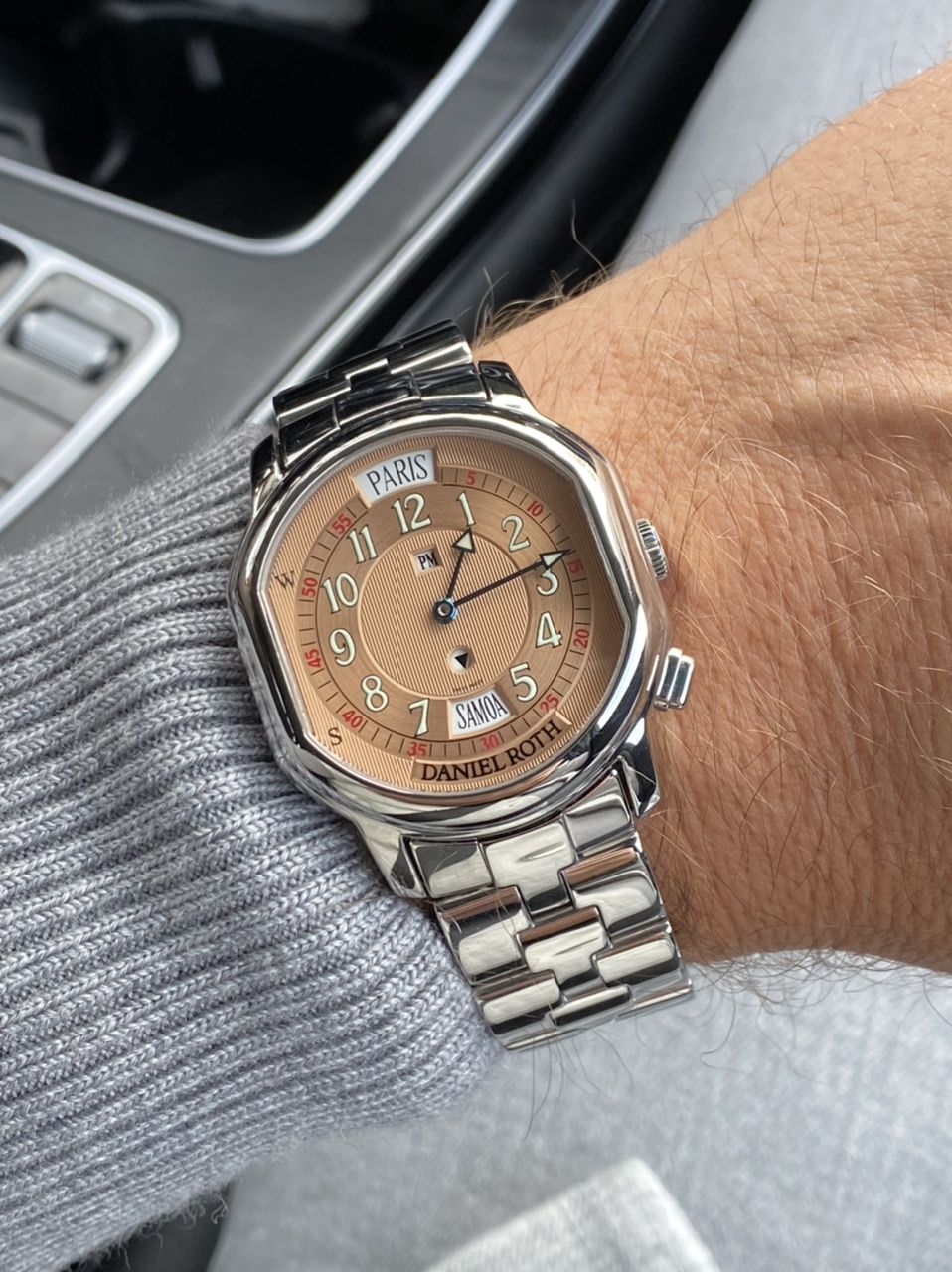 By: Age_of_Surfaces : April 8th, 2021-11:51
I enjoyed the photographs and surprised myself by being drawn in particular to the first one with the diamond-set bezel. Very nice indeed.
login to reply

By: Age_of_Surfaces : April 11th, 2021-10:10
The search for early references requires a fair bit of time and effort. I've struck up relationships with a number of established collectors as well as merchants who possess - or have possessed - some of his work in recent times. Let's see if that pays dividends.
There has been a dramatic uptrend in asking prices for early-to-mid period references in the last three years, not to mention wide variations in valuation. One merchant, for instance, currently has on offer pieces with asking prices between 50% and 300% above for exact same pieces with identical accoutrements. This on top of a sketchy grasp of the watches' specifications. This isn't unusual: the shared knowledge base is quite modest.
Having consulted Europa Star from 1989 to about 2005, it does seem that most if not all DR watches in mint-to-very good condition are available today for well below their original MSRP (notwithstanding the example above). This suggests that they remain undervalued, and implies the market has yet to fully recognise and price in their significance. This is a working assumption I'm willing to work with given how much influence Daniel Roth had: on Breguet, Lemania (and by extension Patek Philippe through their use of his iterations), his eponymous brand, and Bvlgari.
I regard him as a standard bearer of Anglo-French classicism, one of a quartet whose work is and will remain timeless.
login to reply