There have already been serious discussions about the valuation and reception of the V&C movement caliber K1014 and in my opinion they are both quite worth to reflect on.

First of all I would like to mention the article
'The Decay of the Angel' by Carlos Perez, July 2002
"… As a premier maker of gentlemen’s wristwatches, the foundation of its line has ever been the simple hand-wind, typically with subsidiary seconds, and it is here where I think the saddest decline occurred. Since the 1930s at least, most Vacheron & Constantin wristwatch calibers were essentially more refined variants of movements used by Jaeger-LeCoultre for its own watches. The gap in quality grew over time, until the raw ebauches supplied to Vacheron & Constantin could be seen to have only a little in common with their Jaeger-LeCoultre counterparts, and with the finished movements being a world apart. Such a case were the calibers 1001 and 1002, which were provided exclusively to Vacheron & Constantin and Audemars Piguet. Other high-grade calibers like the 1003, 1171, and 1120, had no in-house counterparts at Jaeger-LeCoultre, which served only as a supplier of the raw ebauches.
An elegant caliber in five bridges, the sub-seconds 1001 and the center-seconds 1002 had formed the basis of Vacheron & Constantin’s reputation in the 1950s and 60s. They were matched only by the peak 10 and 12 ligne hand-winds of Patek Philippe, and I would not hesitate to classify the 1002/2 as one of the very finest indirect center-seconds hand-winds ever produced. The contemporary counterparts to these movements used by Jaeger-LeCoultre and LeCoultre were the calibers 818 and 819. Sharing the same basic “footprint” as the 1001, the 818 was a simplified economy design never intended for use in fine watches. It might be most appropriately compared to the present ETA caliber 7001, a solid and reliable extra-flat hand-wind used in inexpensive watches. The elegant curve and sweep of five bridges in the 1001 as largely destroyed by the crude joining of the center and third-wheel bridges in the 818. With the addition of a free-sprung Gyromax balance in the 1001/1 and 1002/2, full Genevois finishing, adjustments, and the Geneva hallmark, there could really be no comparison.
Alas it appears that in the late 1970s (or early ’80s) that Vacheron Constantin either elected, or was forced to give up the 1001 and 1002, and take up the inferior 818 which it re-dubbed caliber 1014. This movement did not feature the option of a free-sprung escapement, and it does not appear that Vacheron Constantin would often elect to brand it with the Geneva hallmark, if ever. It was of course finished to the high Genevois standard in all other regards. Caliber 1014 has formed the backbone of Vacheron Constantin’s production of hand-wound wristwatches (as shown above) for nigh on a quarter-century, a movement which in recent years it has had to share with Chopard, Breguet, and perhaps others, though Jaeger-LeCoultre itself elected to stop using it several years ago. The shift from the 1001 to the 1014 is akin to the technical and aesthetic decline of Patek Philippe’s 23-300 PM to their present 215 PS, if only steeper. …."
(read the full article here: www.timezone.com )
Secondly I would like to mention the answer on a question about the Perez article
by Dr. Roland Ranfft, February 2012
"... Obviously the author believes that kind of evolution after Darwin's laws takes place in a certain watch company. I don't want to steal him his religion, but my view is different: Movement designs are updated or completely replaced to enhance the the profit within short, medium or long term. Redesign of a movement is a balance between enhancement at moderate effort to achieve a reasonably higher price, and degrading with remarkable savings, leaving the reputation of the brand to advertising. An odd job though to compare movements. I don't feel able to do so, because there are too many variables, and a comparison after my preferences would likely be bull...t for others. So why boring them? Back to the LeCoultre 818. It is a straight forward design after best watch school education, nothing really exciting though, but also no visible deficits. But what more should I expect? Flower decorations? Curled bridges? 1mm height? I if I compare with some new designs with their decoration overkill and ridiculous balances I know well what to prefer. …"
(read the full article here: forums.watchuseek.com )
The words of François Constantin: “ ...Do better if possible, and that is always possible...”
This was and is the house philosophy. But what to do with this maxim, when the business is facing financial difficulties?

Why both opinions seem to be correct in the first sight:
My feeling tells me to conform with Carlos Perez.
- Isn't the cost down development is simply a cannibalization of the brand's core value?
But my brain would tell me, earning no money would mean, no future for the company and therefore for the brand - that would bring me very close to Dr. Roland Ranfft.
But that Dr. Roland Ranfft tells us, to compare movements is not possible, is not plausible.
At least not with this two movements. The K1014 movement is based on the same movement architecture (or foot print).

Therefore it would be very well possible, to analysis the very differences, step by step - almost like a black box analysis.
The first basic principle for the cost reduction development would have been, saving production costs on JLC side for the raw ebauches and later on V&C side on refinement and assembly costs.
The next step would have been, to allow further lower cost components (to substitute expensive components) and to integrate components at all - to minimize the costly extra features or parts.
Since the further development was based on the cal. 1001 movement architecture (or foot print), the argument of Perez, the movement was never designed for usage in fine watches, could hardly persist.
For me another philosophy of the house was also, especially since in close cooperation with JLC, something like 'take the best that exists and make it better' (Henry Royce). They take the best they could get. Just the set up point, after the cost optimization, was a quite different than before, especially a quite less elegant and less modern in terms of technology.
But the basis layout of the caliber was not changed much, just very obviously the balance design. The integration, e.g. of bridges, would have cost precision, because of the higher sensibility to temperature change. So any step to simplify would have had some certain costs - I guess especially regards precision or at least the technology precondition to achieve precision.

Why both opinions seem to be wrong on the second sight:
As I have explained before, the both opinions Perez vs. Dr. Ranfft seem to have their week spots.
Now we go right along and deconstruct the K1014 movement and compare every single part.
But are we at the right starting point? Probably no, of course not.
This following picture shows a Vacheron cal. K1001 movement from early 1960 (left side) and a Vacheron cal. K1014 movement from early 1970's (right side). That would mean to compare an apple to a pear in terms of advancement of technology. 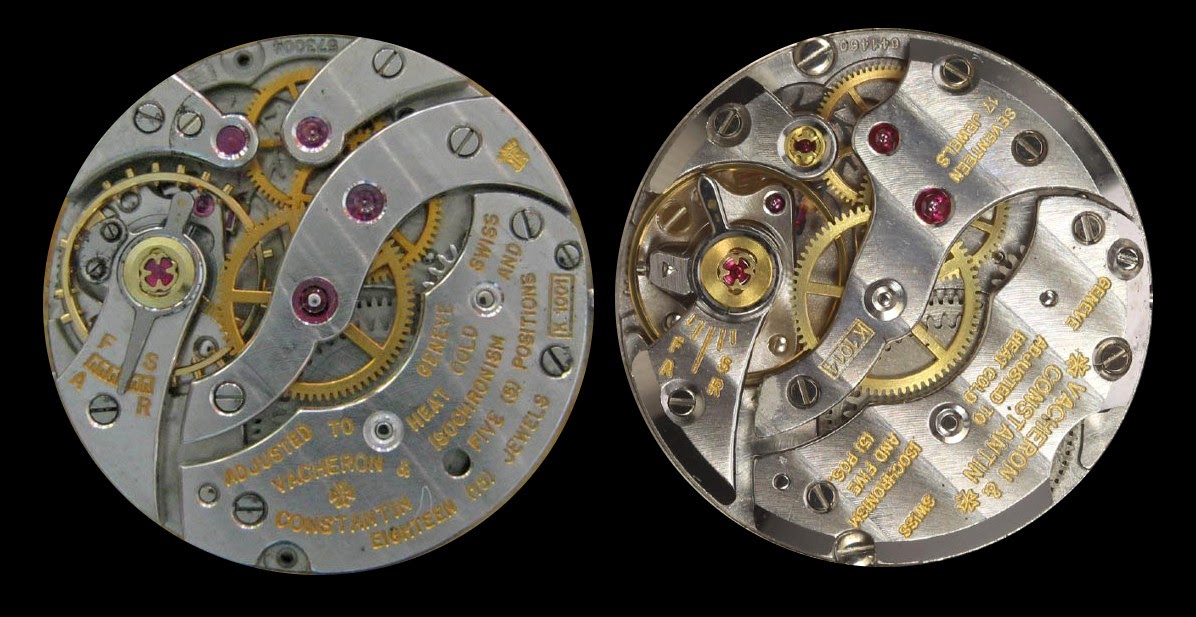 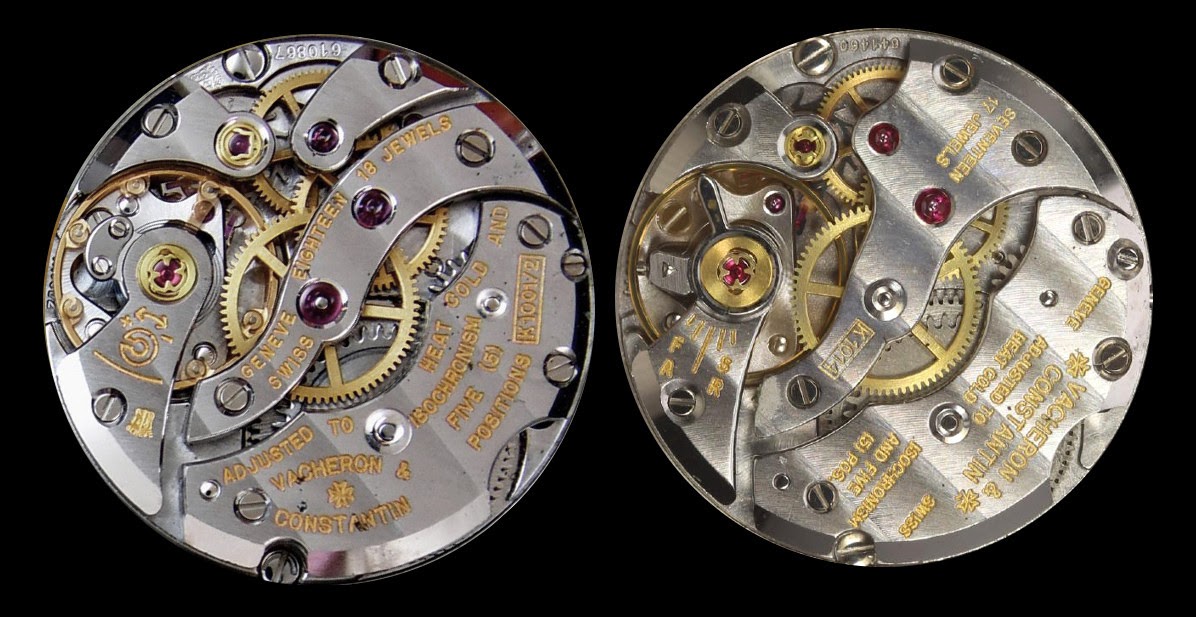 Now we could start to go right along and compare the K1014 movement by comparison of each single part and function.
Already on the first sight you could see, that there has happen quite more than the further development under cost restrictions as prescribed by Dr. Ranfft, it was in deed a cost down development including significant de-contenting in terms of functionality.
Technically a step backwards more likely correspond to the time frame of the early 1960's.
The development seemed to have been necessary to fight the watch companies economical setting within the late 1960's, with the triumph of the micro quartz and the corresponding decline in demand. Also the decline by the oil crisis in the early 1970's and last but not least the advent of vulgarity and the decline of the traditional gentlemen, which could be synonym for late 1960's and early 1970's social or youth movements - the beat generation, all change was ending up in a further decline in demand (in total figures and probably therefore in price).
Therefore both right in spirit, but also both wrong in argumentation:
When I look at that two movements, immediately something is itching my eye, look at that very detail (the red 'X').
Wasn't there something looking quite inconsistent?
Should this have been made by Vacheron watch production staff? 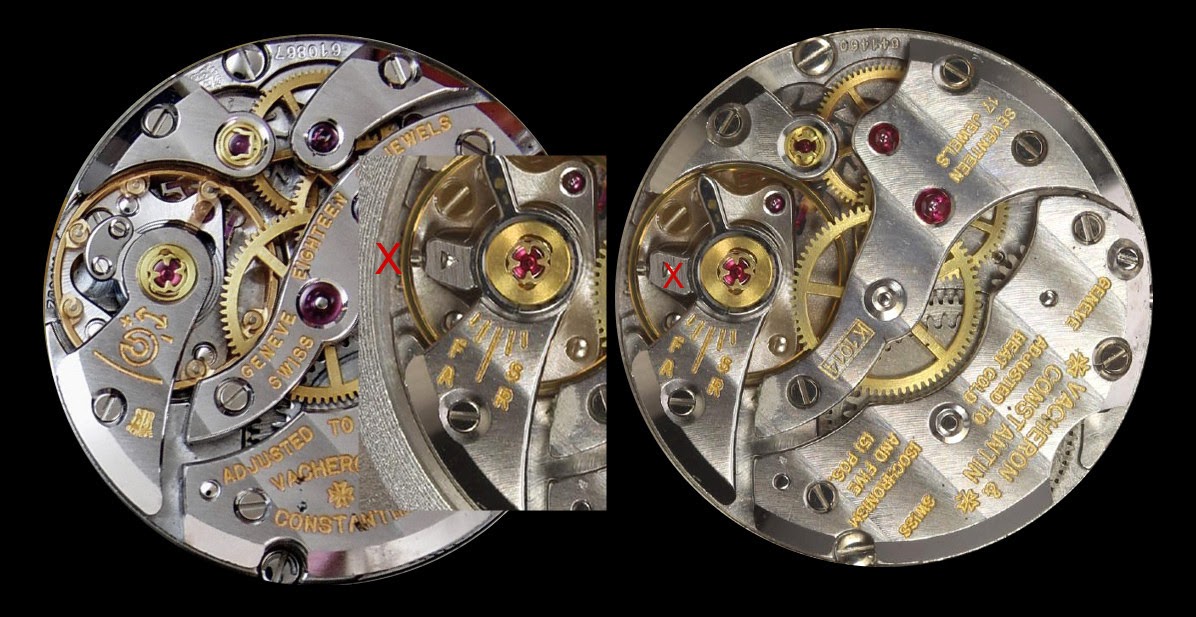 Would this execution of a 'free cut' have been according to V&C standards of refinery of that time?
I would say 'no way, far behind the standards'. Even a quite different standard, that's maybe Jaeger LeCoultre standard.
That's something you could expect at a watch movement for an economic price.
This should be directly compared to the JLC cal. 818/2.
Uuups, and does look absolutely identical!
Well what's about the rest of the finish?
Also made by JLC?
It would become a completely different story, it is maybe the first V&C movement with a refinement pre-produced by JLC?
Let's check that.

make your choice in pink

By: JLCman : December 9th, 2018-05:09
...would be the left pair. Clean, straight lines, very puristic and therefore a nice contrast to the textile texture.
login to reply

What was your final choice. Please share a wrist shot. [nt]

without a final decision

Night Flight - back to poetic

By: anon438 : March 2nd, 2019-23:54
There have already been serious discussions about the valuation and reception of the V&C movement caliber K1014 and in my opinion they are both quite worth to reflect on. First of all I would like to mention the article 'The Decay of the Angel' by Car...
login to reply

The fundamental concept of the modern Sports watch

summary and follow-up: The fundamental concept of the modern Sports watch - II

By: anon438 : March 10th, 2019-14:06
Sometimes it feels hard to follow those endless discussions. Let's have a further look on that current line up. Could you really spot inconsistence? Jewelery, Art and Crafts, Vintache Apeal, Formal, Business, Leisure, Tech, Sports - yes, the FIFTYSIX perf...
login to reply

By: anon438 : March 12th, 2019-14:42
If we look closer at the steel variants, than the more appropriate order would appear. Provided you do respect the movement quality as on ordering principle. (~ Cartier + 30% > Piaget, Piaget + 30% > Vacheron Constantin) Actually the same order principle ...
login to reply