The Zenith 707 caliber nicknamed internally as the “Kartoffel” or potato because of its unique shape was designed in late 1961 early 1962 and built in 1963 exclusively for Observatory Competitions to replace the venerable Calibre 135. The 707 designation comes from the Observatory Competition requirements for wrist watch movements that they be less than 30mm in diameter or 707 square mm in total. It is interesting Zenith decided to call this calibre 707 when the actual area of the movement is 685 square mm.

The movement was the last one designed for the Observatory Competitions from 1963 to 1967 and was never commercially sold to the public. Think of it as a factory Formula 1 engine and therefore its construction and design is built purely for efficiency, competition and performance without any fuss. The development team was headed by Aurelius Mayor who was the Technical Director of Zenith at the time also consisted of Rene Gygax, Jean-Pierre Vuille, Paul Favre and Jean-Pierre Sunier.

The winding and time-setting is done via a crown on the back and the movement has a power reserve of 36 hours running at a frequency of 28,800 bph. Each component has been designed to reduce friction and lubrication is optimized. The teeth of the wheels are tapered, all the pallet stones are of the best quality highly polished 21 rubies to reduce friction. The movement has a thickness of 5mm, a Guillaume balance wheel similar to the Caliber 135 measuring 13.8mm x 0.99mm, a lever escapement, a double anti shock Duofix system for the Balance Escapement and a Nivaflex balance spring wound 15 times with a thickness of 0.16mm and a length of 46mm.  The thin balance bridge is secured by 2 screws on one side and one screw on the other facilitates in the observations of the balance spring. 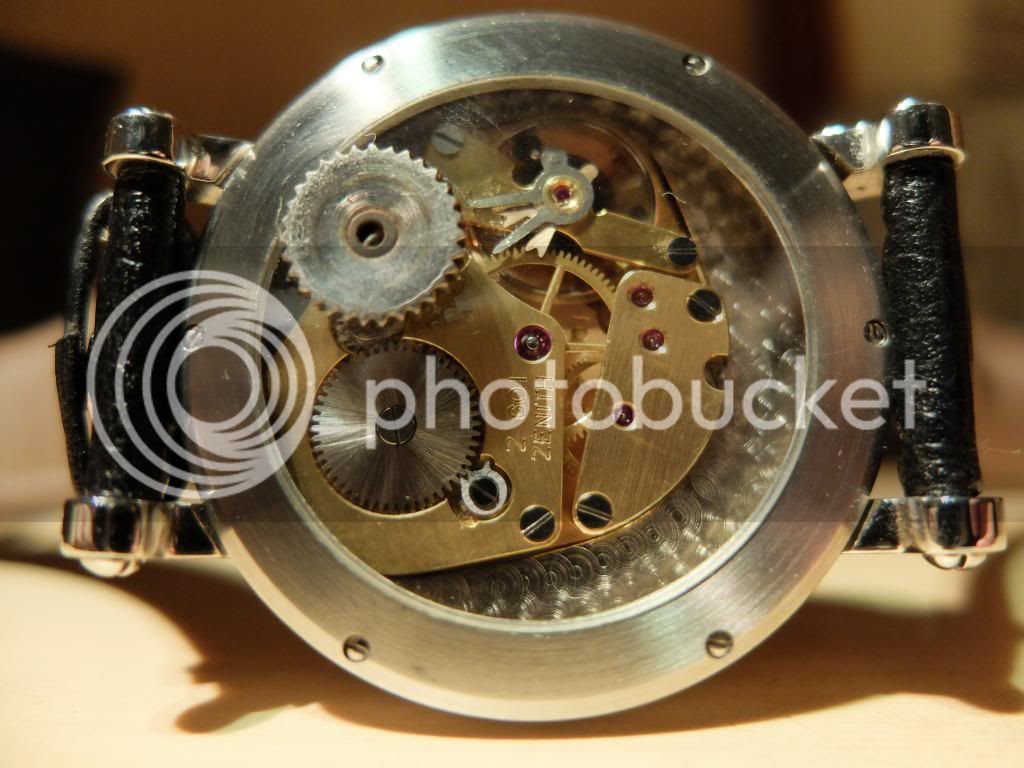 Also highly recommend reading KIH's post on Grand Seiko's attempts to conquer the mechanical wristwatch trials against the Swiss
general.watchprosite.com
S
Credits and Thank You: Zen from Forumamontres, Manfred Rossler and his book on Zenith, Bruno.M1, RDL, Hartmut Richter, Heffels, relojes-especiales, Google Images
This message has been edited by SALMANQ8 on 2014-03-14 11:42:18
login to reply

By: Spellbound : March 14th, 2014-17:26
Congratulations on finding one of these rare movements. A collectors item for sure despite its odd shape. Built purely for accuracy.
Fascinating stuff.
Dean
login to reply

By: SALMANQ8 : May 29th, 2014-07:04
nt
login to reply
By: ztirual : June 1st, 2014-13:58
The response of Zenith to the cal. 360.
A splendid pedigree, a significant piece of horological history. What the movement lacks in aesthetics it more than compensate on the technical side.
Do you  happen to know how many were produced?
login to reply

By: SALMANQ8 : June 1st, 2014-14:52
There is conflicting information on how many of these movements were made, some sources quote 250 and others 200. Regardless only 127 were entered into the Neuchatel Observatory competitions for wrist watches. How many have survived? not many, many were disassembled, broken up, melted down, used for parts, this is the only one which can be worn.
S
login to reply
By: ztirual : June 3rd, 2014-08:42
No message body
login to reply

By: SALMANQ8 : October 25th, 2022-01:01
I wrote in my post "At the 1965 Neuchatel Observatory competitions movement No. 601 of the Zenith Caliber 707 adjusted by Rene Gygax would come in first and also again in 1966. "
the above statement is wrong and I wish to correct it, the movement Z-601 was entered in the 1965 Neuchatel Observatory trials, adjusted by Rene Gygax and achieved a Premier Grading with a N-Score of 5.58 and ranked 109 and was also entered in the following years trials of 1966, adjusted by Rene Gygax and achieved an N-Score of 4.39 and ranked 97.
Credit and thanks: http://www.observatory.watch/
Alexander Pope wrote: "To err is human"
Peter Drucker wrote: “We now accept the fact that learning is a lifelong process of keeping abreast of change."
🙏
S
login to reply

Thanks much, Salman!
Art