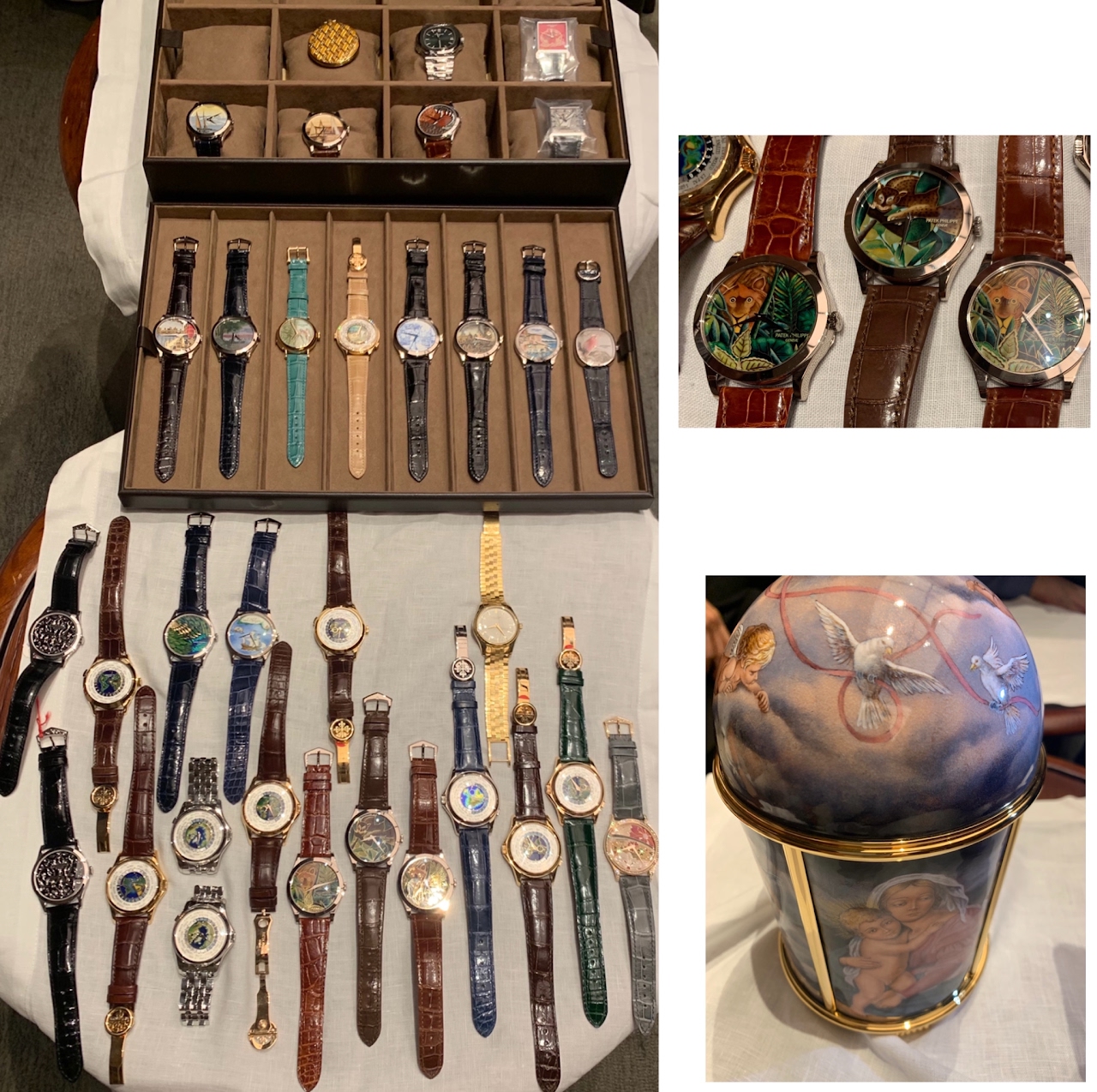 Theme was “rare handcrafts” and we hoped for 20 watches so that we could have more than the previous record of 19 pieces from the sports theme (  www.watchprosite.com

, which had beat the prior 18 watches from worldtime theme (  www.watchprosite.com 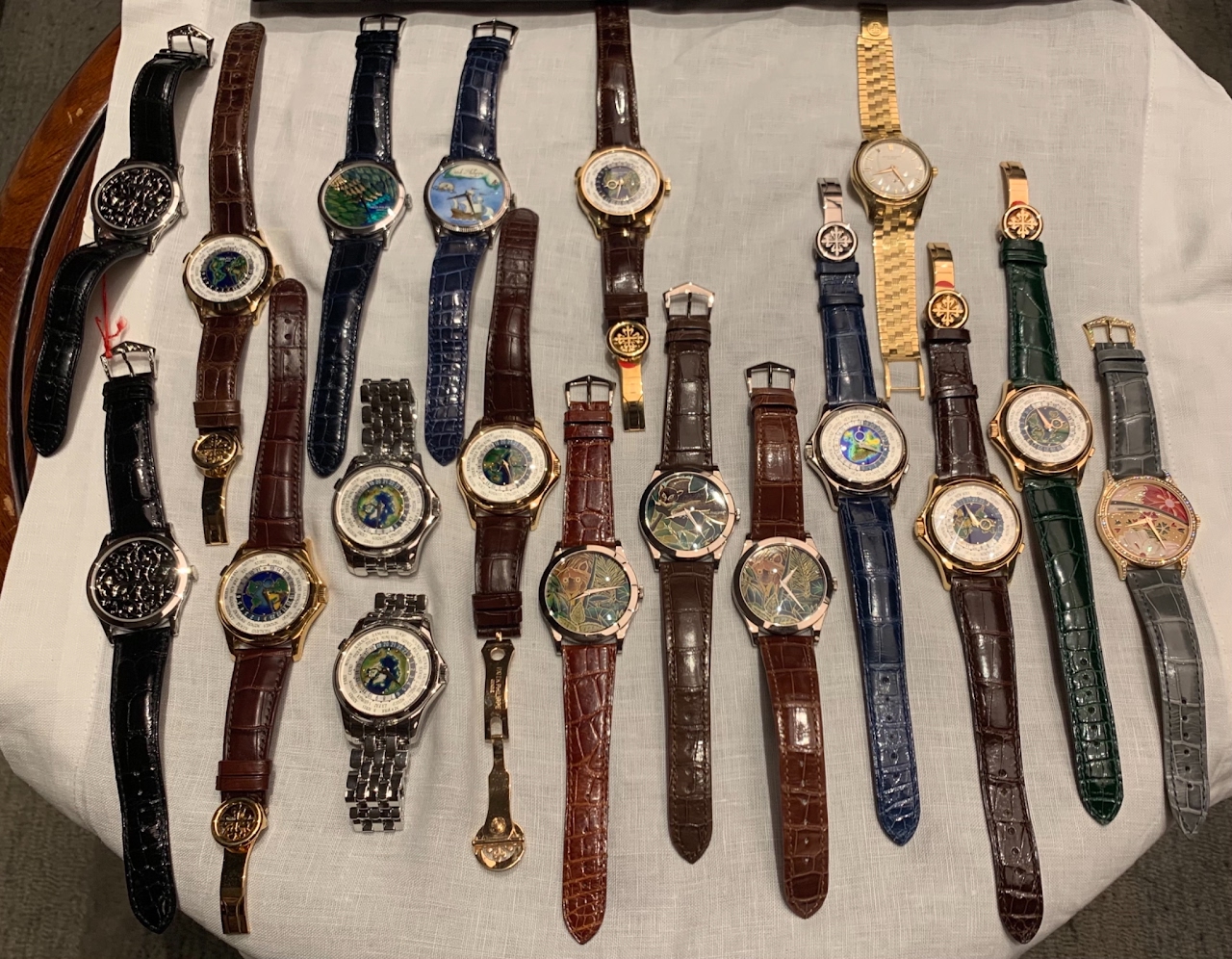 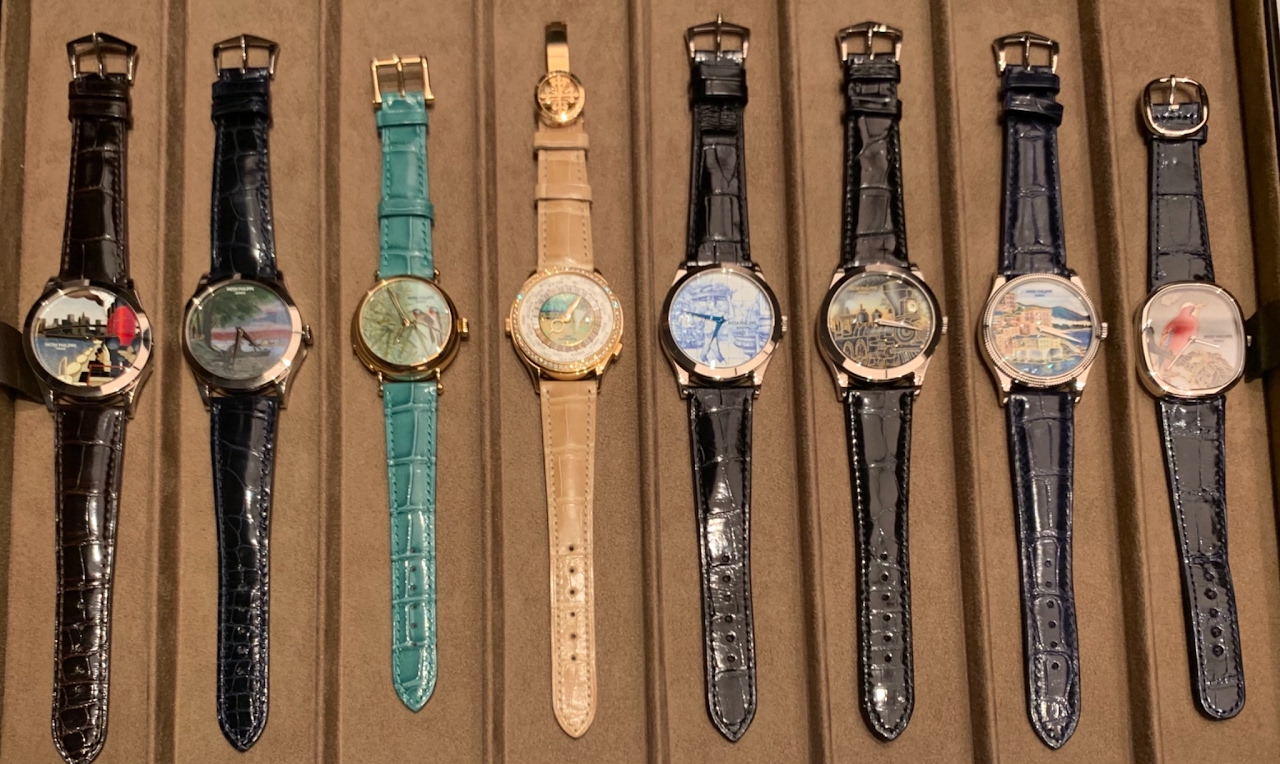 Yours truly, The Enamel Slave/Addict, has found my master, The Enamel KING 🤴 (who brought around half of the goodies) !
Each piece has its own personality and is truly  “unique”. 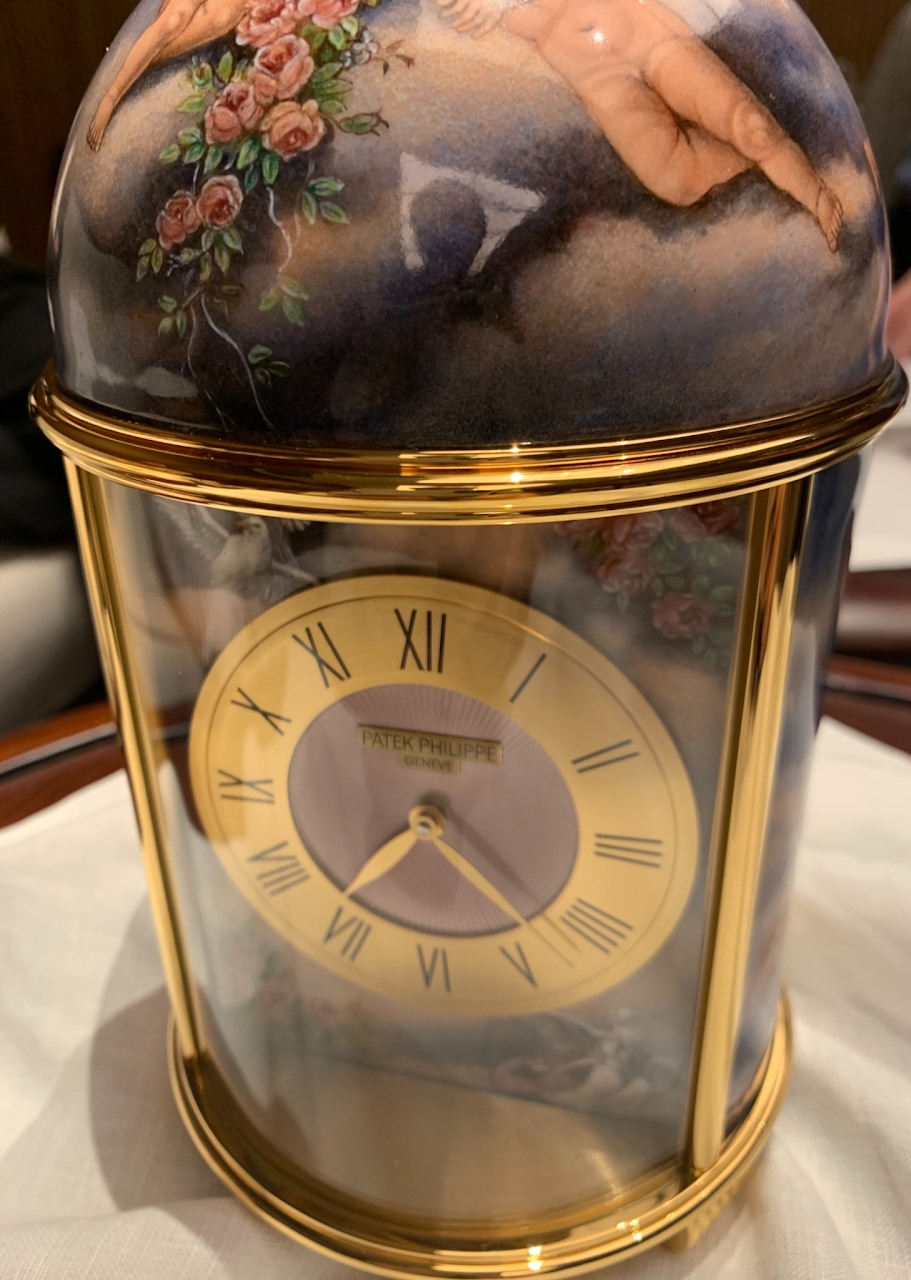 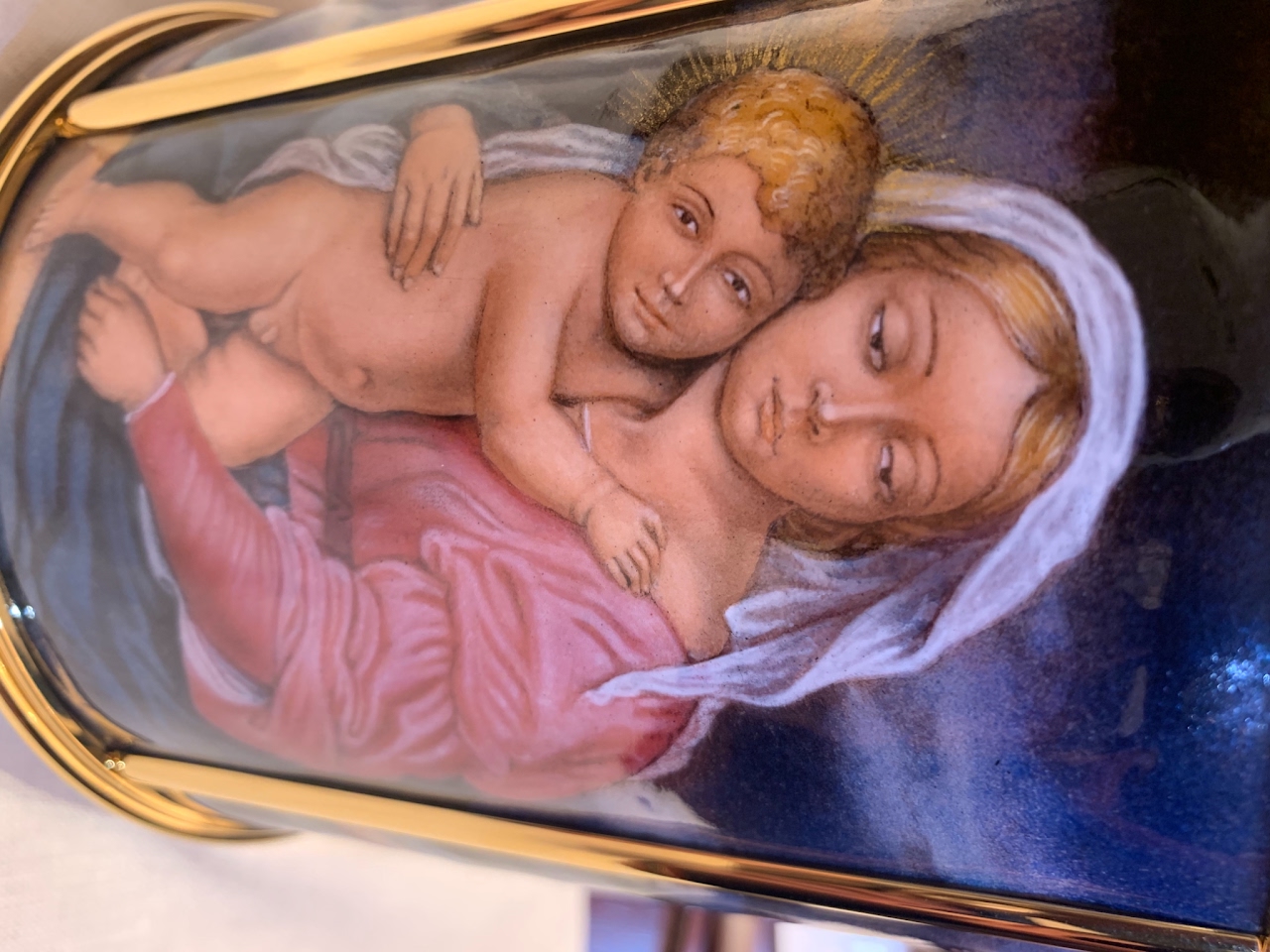 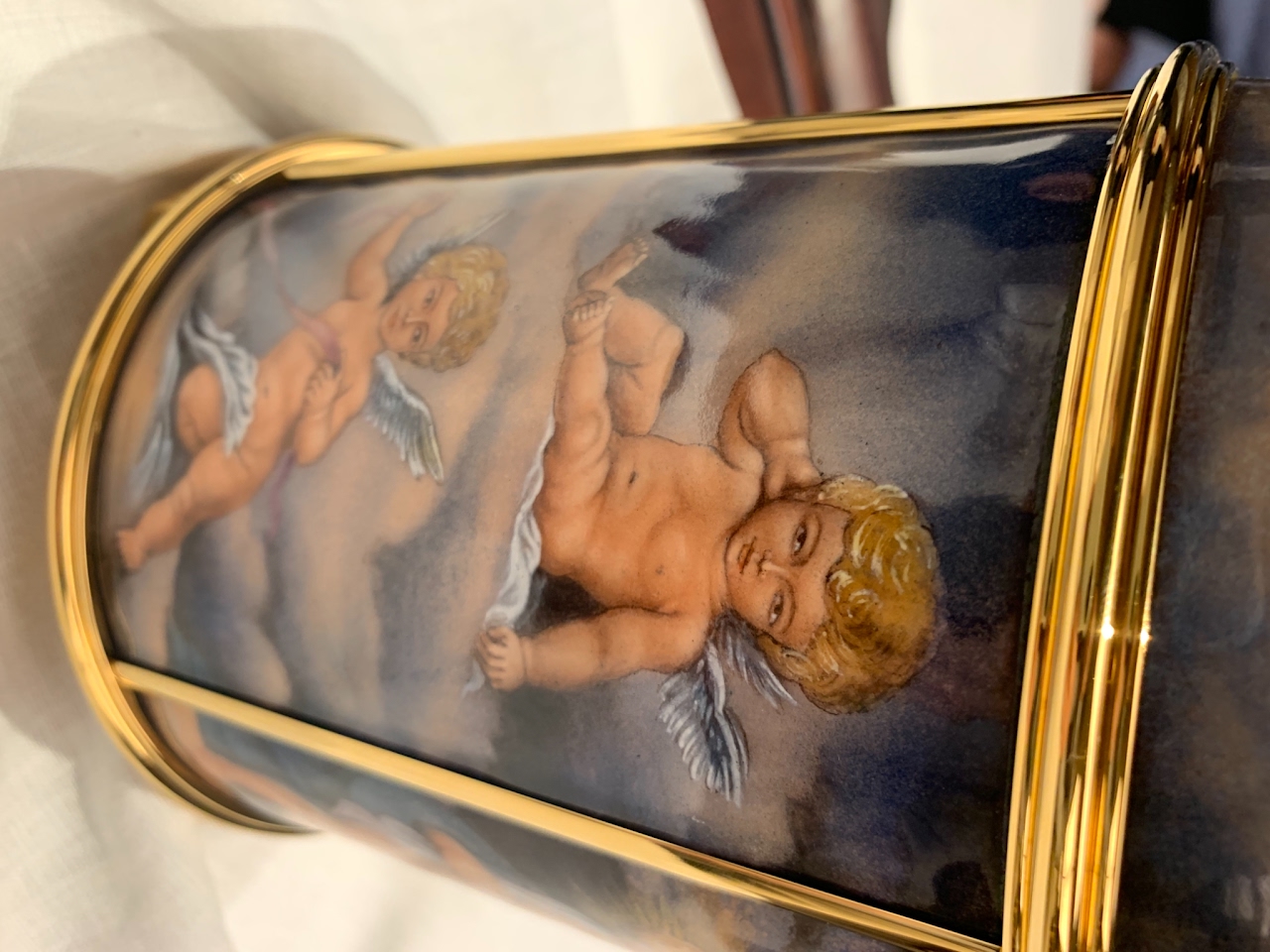 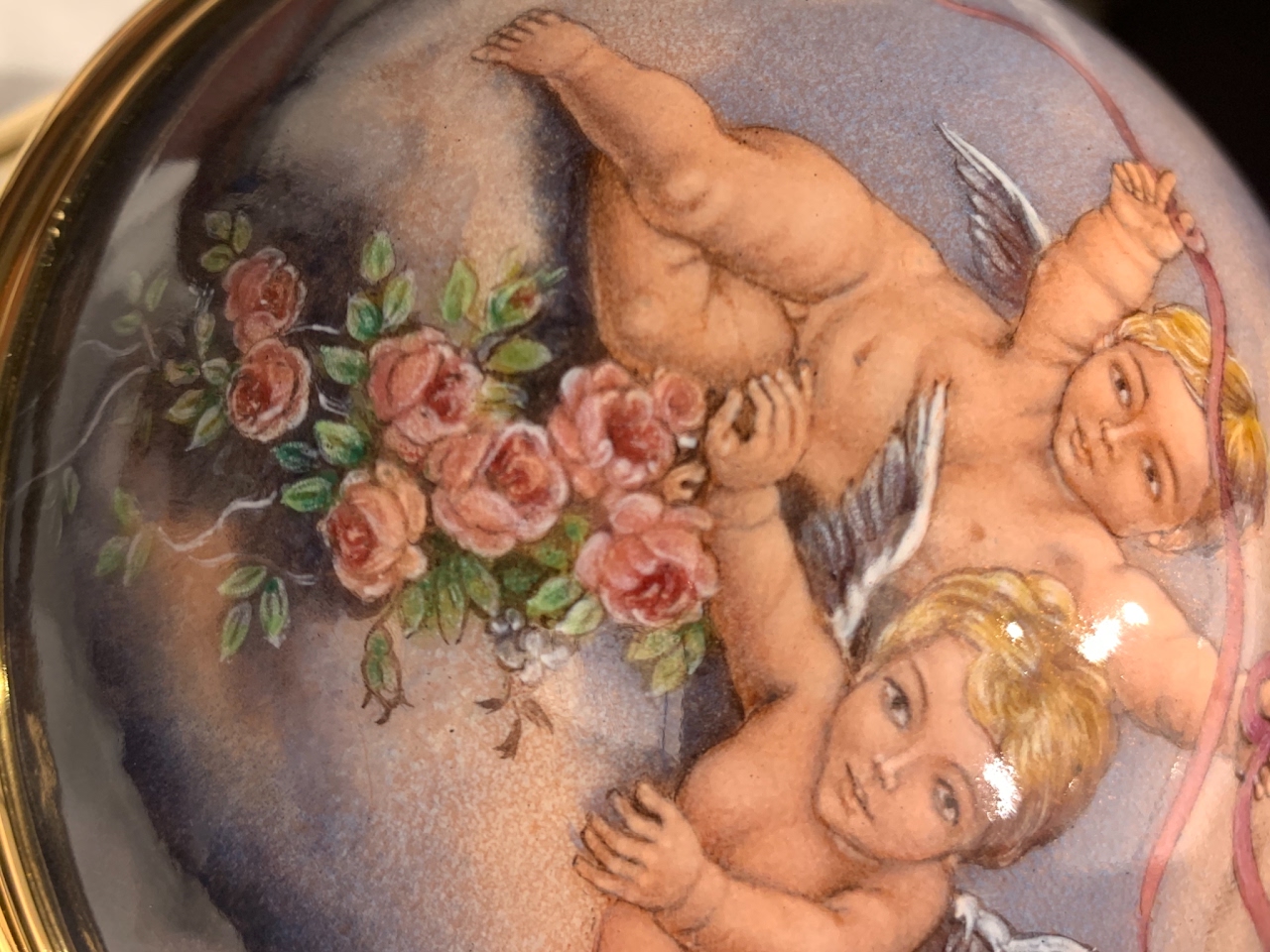 IMO, The star ⭐️ that stole the show was the Dome Clock due to its artistry, the huge amount of enamel work done, and the story of how the owner tracked down this piece.
I have had the pleasure of studying a few dome clocks previously but was amazed at how great this one was.
The owner informed us that, unlike most others with cloissone enamel, this clock is made with miniature painting !  Very few used this technique.  The other one he mentioned was the clock for Shakespeare.  Originally when he found out about this Basel piece a few years ago, he requested it immediately but had to chase it down to an AD he never purchased from previously.  Undeterred, he flew out to meet the AD half way around the globe and declared his eternal love for this clock.  After a long discussion, he convinced the AD that he should be the worthy owner !  Such a beautiful love ❤️ story !
Would you go through all these hurdles to declare your horological life for a rare handcraft piece ?  His efforts reminded me of how I declared my LOVE/LIFE for the Rousseau enamel lion 🦁 (  www.watchprosite.com 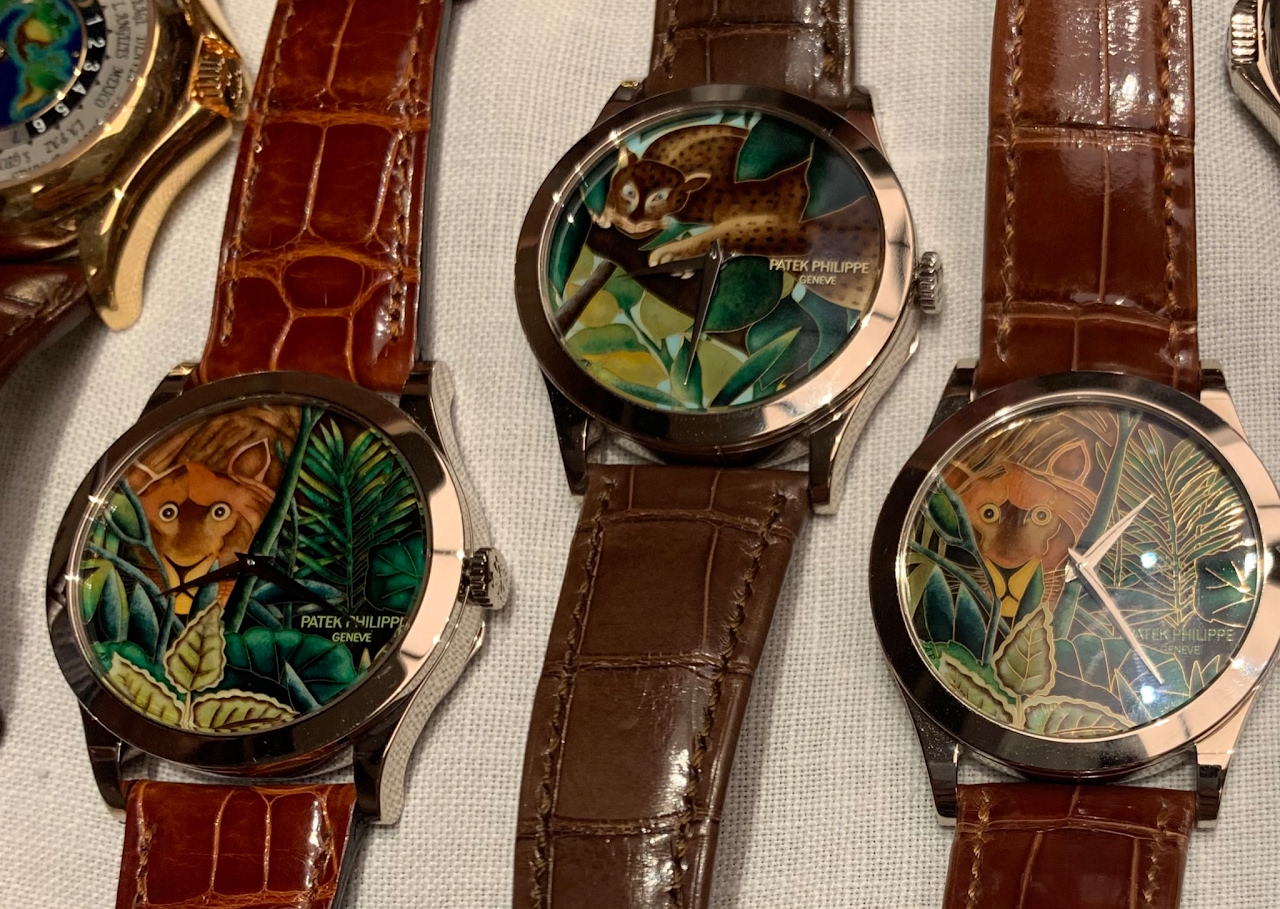 Uniting the Rousseau enamel sibling, lions 🦁🦁 and Jaguar 🐆: they roared the loudest 🤣 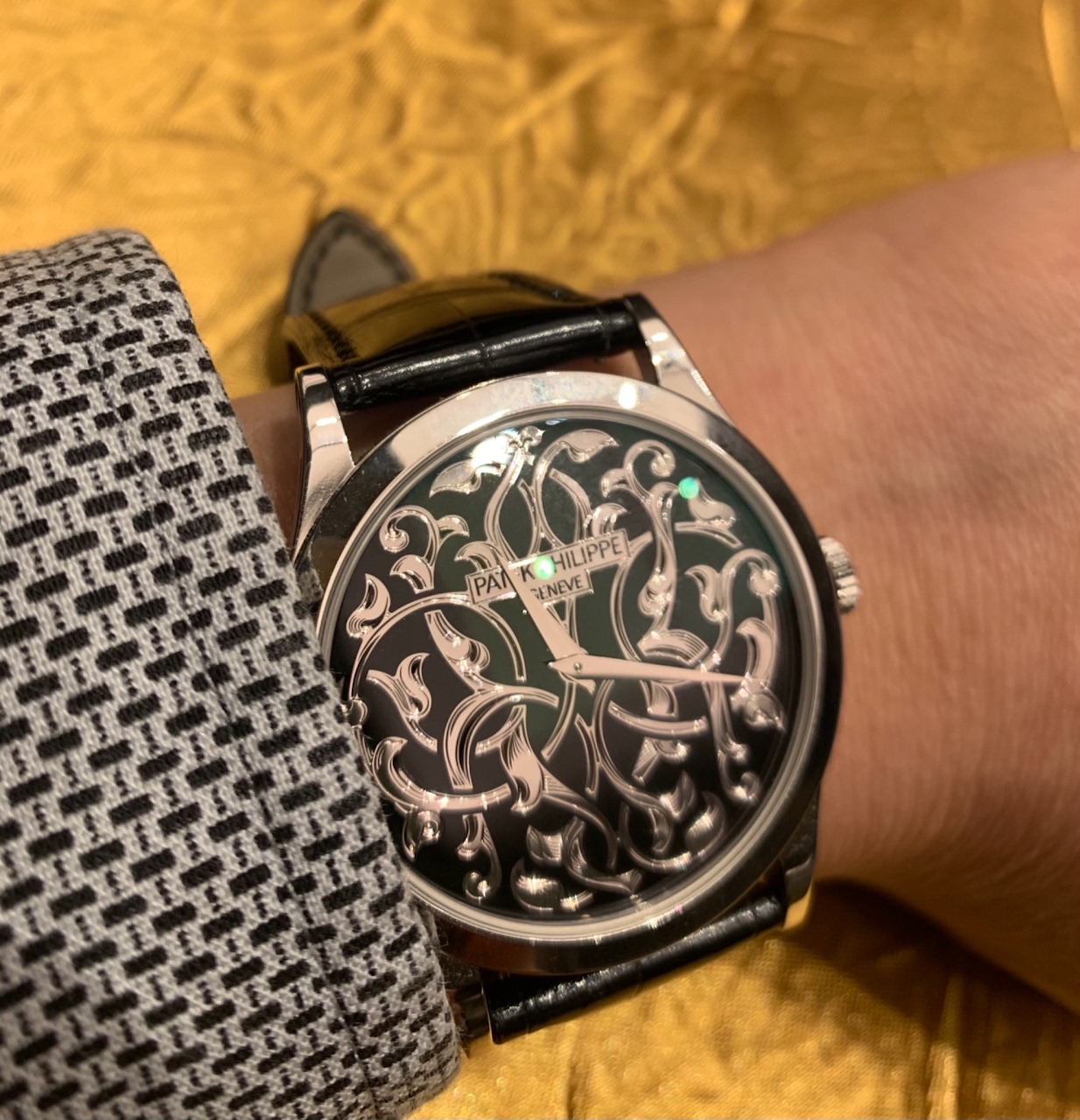 Two of these ☝️ engraving beauties attended the GTG
Other than the green GIANT, which piece do you like most and why ?

By: Clueless_Collector : July 27th, 2021-17:21
Amazing collection, do you hire body guards for this, just wow...like a museum. I'm loss of words to think what is the favorite now...just drooling.
login to reply

By: Clueless_Collector : July 28th, 2021-20:03
Also interesting to note that Nautilus is being wrapped like it’s more previous than other rare handcrafts, mind boggling 😜😅
login to reply

Good choice with the 5089G “azulejos” which means

By: GLau : July 29th, 2021-19:21
“a kind of glazed coloured tile traditionally used in Spanish and Portuguese buildings.” They came out in Basel 2017. This 5711 green giant was on my wrist previously at a smaller GTG. Since the auction, the owner wrapped it up and I totally understand wh...
login to reply

Thanks Gordon for a great photoreport of this GTG -- total Rare Handcraft heaven there! :-) Major congrats of course to the spectacular pieces brought by the "King," or Member Michael Ng (right?? ;-)

By: FabR : July 27th, 2021-17:29
Obviously, one piece in particular attracted my attention (if I really have to choose!), also because Michael's is the only other "Boccadasse" besides mine whose existence is publicly known... Good group also of 5131s, of course, but many of those out-of-...
login to reply

Sorry Fab, participants at this GTG wish to stay

That is correct, reference 5089G-011 -- first picture, box of 8, far left on the bottom row ;-) See Micheal's presentation of this unique piece on our forum at this link:

Thanks and there was a wood

you do not have bad eyesight ! Just that there were

Sick!! Amazing GTG! (get together )

True ! Got sick from

WOW! That is EPIC!

That's definitely one of the MOST EPIC GTGs of Enameled watches/clock in the world!

Thanks Patrick ! Now I must think of a

By: mahesh : July 27th, 2021-19:42
I'm sure you guys had a great time... I'm equally happy I don't see any Nautilus, which shows there are watch collectors & then there are connaisseurs ! thanks for sharing. Best, mahesh.,
login to reply

Hi mahesh, you are welcome and there was a

By: PalmSprings : July 27th, 2021-20:18
I wasn't expecting such a huge different between the 2 Lion dials. I prefer the one on the left, better drawn (the plant and leaves) and the colours used, way more vibrant.
login to reply

There are some differences because each is unique due to each is hand made !

Oh also, for some reason, I’m drawn to the ellipse…

By: Tchela1 : July 27th, 2021-22:46
The shape of the ellipse appeals to me the most for showcasing the artistry and framing the image of the bird. I think it’s simplicity let’s the beauty of the artwork shine. Just my two cents!
login to reply

The ellipse has a shape that is

I dont know what to say, just woooowww!!!!

The red rectangle watch is the

By: GLau : July 28th, 2021-13:38
Chinese zodiac watch for year of the monkey 🐵! Please see my previous post from several years ago
login to reply

Hi Justin, lucky for you to only have dreams/nightmares because

So are you ready to share with us your

LOL Gordon, if I had some of these enamel beauties from Patek I would happily share them with you and the community. Sadly I don't have any yet but that might change in the future 😜😁

Out of this world! Wish we could all be there!

Yes, perhaps we need a

This GTG is a dream world of a different dimension for me. Thank you for reporting on the meeting that I could never experience

Next time when you are coming to HK, please

Gordon, I don't know why you need those Watchbox events. This is so much better ! LOL

You are welcome Jay ! Yes, this GTG is more EPIC than the Watchbox event but

By: PP888 : July 28th, 2021-01:26
Wow!! Wish I was in your area of the world where GTGs are now coming back to normal. Very hard to find collectors willing to come out like that in my part of the collecting world! Again enjoy and WOW!!
login to reply

Glad you were envious 🤣

Not 2 persons but several !

The G first, then the P.

Good choices ! What are you

Dear Gordon, thanks for sharing with us the GTG of these incredible rare handicrafts. The 5131 has become a "regular" watch among all those rare birds.

By: joenghenry : July 28th, 2021-10:13
I like 5088P the most, as I have a particular preference towards black enamel (other than blue) and those leaves pattern engraving. Too bad that this GTG clashed with my staycation.......
login to reply

Not with that collection of watches

What's inside the pocket watch?

Hi LK, we admired the rare handcrafts on the outside of the pocket watch and

Haha. I have a feeling it's pretty special inside, too.

When I bought Shakespeare Dome Clock, competition was especially fierce for it.

By: Horology_Ancienne : July 30th, 2021-00:16
Amongst offers from various individuals around the globe, I was also competing against known names in the UK. It’s one of my favourite pieces in the collection. Miniature painting on enamel is extraordinary - certainly as the owner of one I can very much ...
login to reply

By: Huei : July 31st, 2021-07:48
These pieces are just so beautiful and exquisite which showcases one of the deepest roots of Patek. This is truly what Patek is famous for and trying to preserve in the watch making horology. We, as enthusiasts, are so fortunate to be able to learn and ap...
login to reply

Thanks Huei for your kind comments ! Yes, more posts about different

Yes Erik, the Worldtimers are charming !

I am speechless! Amazing GTG….wish I was invited!

Thanks KC ! To top this GTG, now we need to find

Glad you take it this way, Gordon 😄

Hi Daniel, getting on a wait list for a rare piece is

By: jon_jon : August 12th, 2021-17:58
This collection of rare watches and enamel dome clock is amazing! Thierry Stern may want to request some of these watches on loan for a future Patek Exhibit ;-) The dome clock and the marquetry watch are what caught my eyes more than others, although they...
login to reply

You are welcome jon_jon ! The catalogue for

By: GLau : August 13th, 2021-07:04
rare handcrafts pieces contain both unique (dome clocks) and ones with up to around 10 pieces. Even for the ones with 10 pieces, since each is handmade, each one is truly unique. The Rousseau enamel lions 🦁🦁 are different !
login to reply

By: Anubis : August 17th, 2021-09:11
This is unbelievable! What a mind blowing group of watches. I can only assume in person they are even more wonderful.
login to reply

Welcome to the Patek forum and WPS, and thanks for your comments !

By: GLau : August 17th, 2021-10:02
Yes, these rare handcrafts pieces are even better when you see and inspect them in the metal !
login to reply