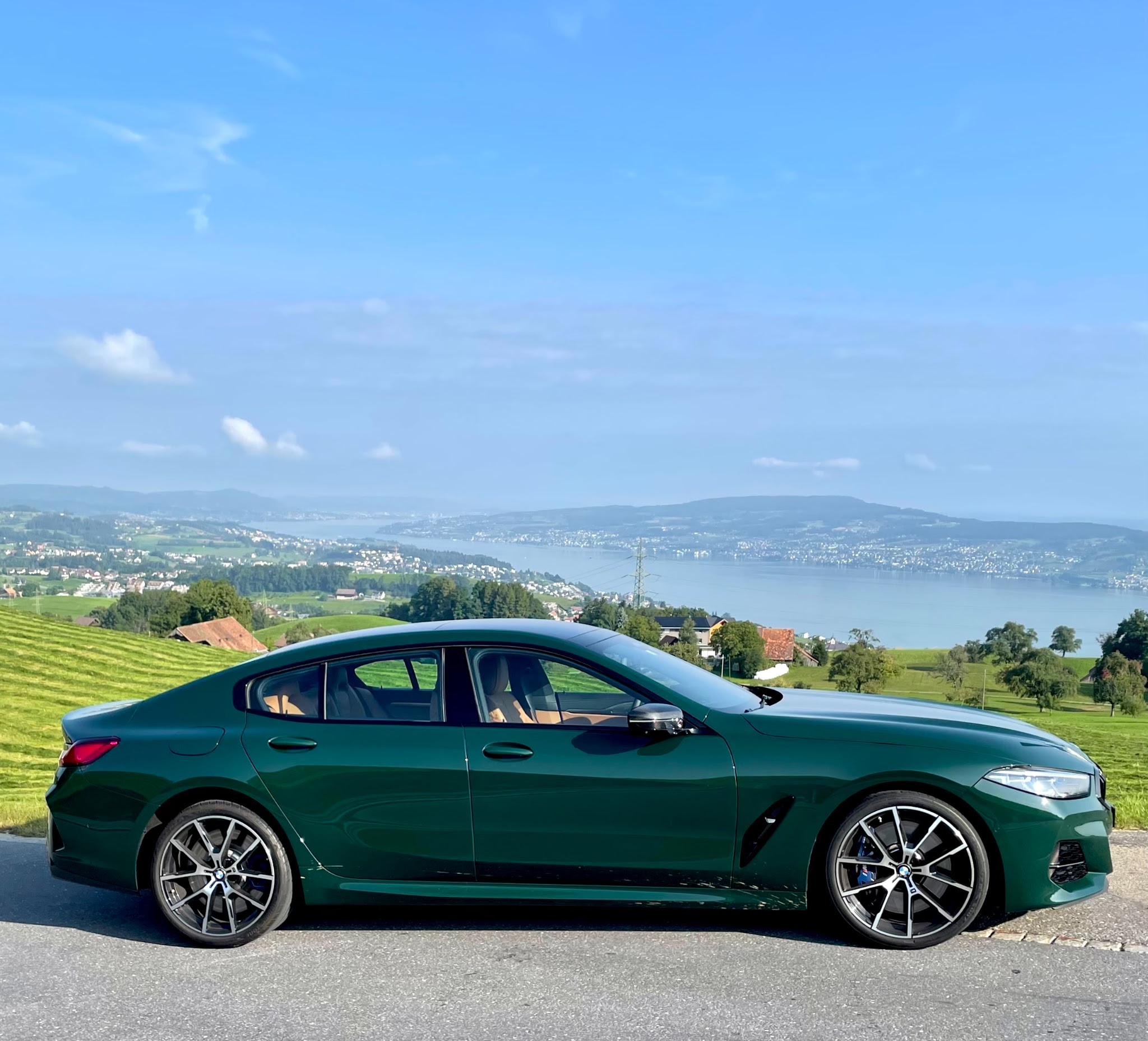 By: InHavenPro : May 1st, 2022-17:11
is actually one of the few in the current (massive) BMW line-up that I actually like. It is also helped considerably by the fact that you optioned it in the most desirable exterior-interior color combination possible

By: patrick_y : May 1st, 2022-17:57
I'd probably specify a dark blue exterior and a caramel interior. Since in the USA, you're probably not able to specify green unless you do a custom build at the factory. What a machine! I miss my V8 5 series now! I had a 545i BMW that I enjoyed immensely. But those 45i engines were awful in the maintenance department. The technicians loved it because it gave them billable hours, but they also hated it from an accessibility perspective (everything was deep inside of the engine), and it leaked oil from so many places, internally and externally! It also leaked coolant internally (although mine never had that problem).
login to reply

By: InHavenPro : May 1st, 2022-18:14
I drove a mid 2010s 545i and it felt absolutely excellent for that type of luxury sedan package - even better than I had anticipated. With that said, my all-time favorite BMW still remains the E90 M3 (NA V8) which I had for the introductory 2008 MY, custom ordered and shipped directly to me from Germany

. I even tracked the vessel it was on before it arrived at the Oxnard port.... Good times and memories, Filip
login to reply

The 2008 M3 had the S65 engine that was amazing.  Ferocious sounding, incredibly emotional, high horsepower, lower torque, and super linear power delivery.  It was geared quite low, so even in top gear, the RPMs would be relatively high for cruising speeds.  But what an amazing engine.  How long did you keep yours?  Did you ever have any problems with the rod bearings?  The oil, being a 10-60 weight is very thick and slow to warm, thus, really requires a full 15 minutes to warm up, even longer on colder days.  I bet a lot of people who didn't warm up the engine were probably the ones who had more wear on the rod bearings.  A true motorsports engine adapted for the street with minimal disguise!

By: InHavenPro : May 1st, 2022-21:03
it must have been the 550i trim. I've simply forgotten as this was back in 2016, it was one of those loaner cars while my vehicle was serviced.
I couldn't possibly manage to imbue any more praise than you already have on that marvelous S65 engine. The very tragic fact is that the reason I got 'rid' of it was because the Great Recession had hit, and it would have been hugely irresponsible of me to keep a $1K (back in '09) a month finance arrangement plus all that gas expense. Otherwise, I would have likely kept it to this day! It was only a year-and-a-half old, and had around 9K miles on the odo. Fortunately, a super-nice Asian guy responded to my ad on AutoTrader, and I was sincerely happy to sell it to him given his obvious knowledge and enthusiasm, it was crystal clear he would love and maintain it as well as I did

. Thanks for the nostalgic recall! Filip
login to reply

By: patrick_y : May 1st, 2022-17:39
I would've settled for the 840i.  But the M850i is all the more better!  My AMG says hello and wishes it could stretch its legs.  Unfortunately in the United States, the police will stop you if you go over 120 KPH, our speed limits here in California are only 105 kph!  My car wishes it could stretch its legs like yours!  On another note.  My car would probably consume around 14 liters per 100km on this kind of a route.  You've got 200kph fast sections where the high speeds reduce your efficiency, and you've got slow 120kph sections where the car is getting close to peak efficiency.  What kind of efficiency would your mighty machine average on such a route?

By: patrick_y : May 1st, 2022-18:04
You're exactly right! When I drive, I'd probably want a heart rate that's relaxed and yet alert. A car that gives me a very nice and relaxed heart rate, even at high speeds, is invaluable on long trips. I can't say from my mountain of experience, since in the USA, we can't drive very fast (although we seem to have huge 5 liter and 6 liter engines in our cars), but indeed, driving in Germany can be a great experience. I really like the Bentley GT, although I mainly drove a V8S (company car), and I found it to be a delightful car, easy to park, easy to drive, good handling, etc.. Can't say I got it up to a high speed. Probably 130 kph if even that? It was in the USA. To you and most Europeans, that must sound like a perfect waste of the capabilities of a very capable machine! I didn't like the audio system in the Bentley, and the NAIM system took up a lot of space in the ceiling of the trunk, and to my ears didn't sound especially great.
login to reply

By: patrick_y : May 1st, 2022-17:53
Reliability is up.  And the bottom structure of this car is now all aluminum with aluminum double wishbone front axle suspensions.  Compared to the multi-link strut suspension and steel subframe, this is a remarkable improvement.  Double wishbones are especially nice because they keep the tire in better contact with the road, maximizing grip.  The negative of Double Wishbone is that they take up more space than a traditional MacPherson strut set up (what BMW used to use) and thus packaging and design costs go up.  The actual component cost at the manufacturer level for Double Wishbone isn't significantly more expensive (since manufacturers can buy in bulk quantities).  Also, Double Wishbone physically takes up more space, which means less under-the-bonnet space for the front and less trunk space for the rear (assuming your trunk is in the rear).  Suspension parts are often made in steel as this is very reliable and cost effective.  However, the weight of the steel dampens the car's motions, and the unsprung weight has its own intertia gravity, which reduces the immediacy of the car's dynamism.  Thus, aluminum is advantageous as it's light.  The disadvantage of aluminum is that it's more easily damaged and more weakened when damaged than steel, thus an aluminum set up would not be favored in an SUV that would do true off-road duty.  An off-road SUV would use steel that is less easily damaged and can theoretically still retain most of its strength even after being slightly bent from hitting a rock.

Now, why am I singling out BMWs specifically?  BMW has really made a big emphasis on suspension design and improved powertrain reliability over the years (especially with the 3.0 liter I6 B58 engine).  The 5, 7, and 8 series are all class leaders- aluminum intensive suspension and body structures and from the smallest engine to the largest one.  Comparing the Mercedes E63 AMG to the BMW 530i 2.0 liter, the E63 has a rear steel subframe and mostly aluminum linkages - compared to the BMW which has virtually all aluminum subframes and aluminum linkages on the base 2.0 liter engine.  The bottoms of the BMW wouldn't look much different compared to a Ferrari sports car (Ferrari sports cars are very aluminum intensive).  Even Porsche uses a MacPherson strut set up and not a Double Wishbone!  Way to go BMW!

There is no journey too long in this car.
Enjoy your trip!
login to reply

By: MichaelC : May 10th, 2022-12:56
I equate my relationship with a brand like this to say a newbie in the world of Panerai.  They may love new references, and not understand the history.  I'll readily admit that is me and BMW.  I could not tell you the differences between E series models, but any BMW fan easily could.
Congrats on the green car!
login to reply